A lack of funding disconnects SETI

What if you were all dressed up and no place to go? Sadly, that’s the quandary the Search for Extra Terrestrial Intelligence (SETI) is facing. With a severe shortage of funds for daily operation, SETI has been forced to shut down it’s $50 million listening post near Mount Lassen in California. And the timing couldn’t be worse, since astronomers recently found over 1200 new planets nearby, many in the so-called “habitable zone” where conditions are ideal to support life.

“There is a huge irony,” said SETI Director Jill Tarter, “that a time when we discover so many planets to look at, we don’t have the operating funds to listen.”

A luck of funds is nothing new for the eavesdropping outpost. SETI was originally government funded back in the 90s. But Congress gutted the funds out of NASAs budget, calling it the “Great Martian Chase.” SETI received a reprieve thanks to Microsoft co-founder Paul Allen and others, who donated over $50 to build the mammoth 42 dish complex. Other funding from the National Science Foundation and even the State of California has dried up do to budget cuts and now SETI can’t keep the lights on. As such, the Allen Array has been put into hibernation.

There is some hope that the array can do some “tent making,” farming out their services to the US Air Force for satellite tracking duty. But funds are tight everywhere and budget hawks in Washington are looking to trim the Defense Department Budget. So, SETI is turning to the private sector once again. Users who share the mission can donate to SETI here. About $5 million is needed over the next two years.

“Honestly, if everybody contributed just 3 extra cents on their 1040 tax forms,” said SETI senior astronomer Seth Shostak, ” we could find out if we have cosmic company.” 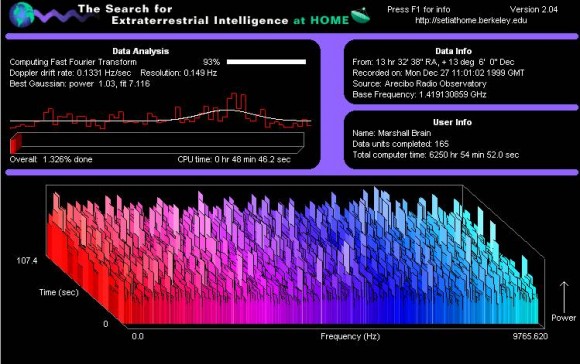 Meanwhile, SETIs mission continues with programs like the SETI@Home project, and setiQuest Explorer, which allows citizen astronomers to use their computers to reexamine existing data for radio patterns which may have been missed with earlier, less sophisticated algorithms. But as of now, if ET phones home, nobody will be answering the call.