Imagine traveling 85 miles per hour on a bicycle, with your pedaling providing the only power. Now, imagine doing it in a sealed, bullet-shaped “speedbike” over a 5-mile stretch of flat road. That’s exactly the team AeroVelo has done this week at the World Human Powered Speed Challenge competition, setting a new world record for the fastest human-powered vehicle. The team’s “Eta” bike reached a speed of 85.71 miles per hour, topping the previous record of 83.13 mph.

Currently taking place in Battle Mountain, Nevada, the World Human Powered Speed Challenge is in its 16th year. The competition is open for anyone to participate, and cyclists are given a 5-mile (8 kilometers) stretch of road to build up speed, then hitting a 200 meter section specifically picked for its flatness, where speeds are recorded. 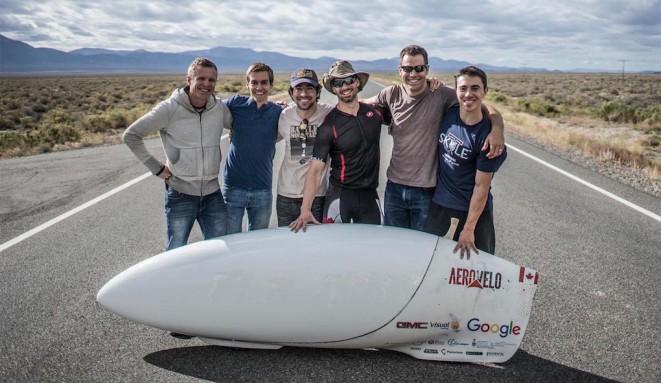 The video below shows team AeroVelo’s attempt at the 2014 challenge. There are a few shots of the bike without its shell, revealing how the pilot must lean back into an almost horizontal position.

AeroVelo set the record only yesterday, however the competition will continue into the weekend, so there’s still a chance they might be topped. But the team already has a history of setting new human-powered vehicle records, including a flapping wing aircraft that managed to keep itself in the air for 19 seconds in 2010, and a human-powered helicopter that flew for one full minute in 2013, winning the Sikorsky prize.