Microsoft is one of the granddaddies of the tech world, and one of its biggest claims to fame was Internet Explorer. Of course, that is history, and IE, as it would be known, became more of a liability in recent years before it was finally put to rest. Microsoft initially struggled with creating something to fill in the big shoes left by Internet Explorer, but it almost struck gold when it finally decided to build upon the open source Chromium browser for Microsoft Edge. Unfortunately, much of the good faith that Edge was able to build up is now almost completely lost, and we’re laying out the reasons why Microsoft Edge is something you’ll want to avoid for now.

Microsoft has made quite a few missteps with Edge lately, but the latest seems to have really blown up over the Internet. Perhaps because of Bing, the company has a vested interest in making online shopping a core feature of its web browser, and not everyone is too thrilled about having that built-in. Even worse, Microsoft Edge now also has a built-in feature that lets you “Buy Now, Pay Later” via a third-party partner named Zip.

On the surface, that almost sounds like a good thing since it will help save people money. The backlash from the feature, however, comes from two fronts. The first bemoans how Edge is slowly but surely becoming like Internet Explorer while another camp has concerns about adding BNPL features in the first place. While advertised as a money-saver, those schemes often end up costing people more as they take advantage of bad shopping habits rather than correct those. 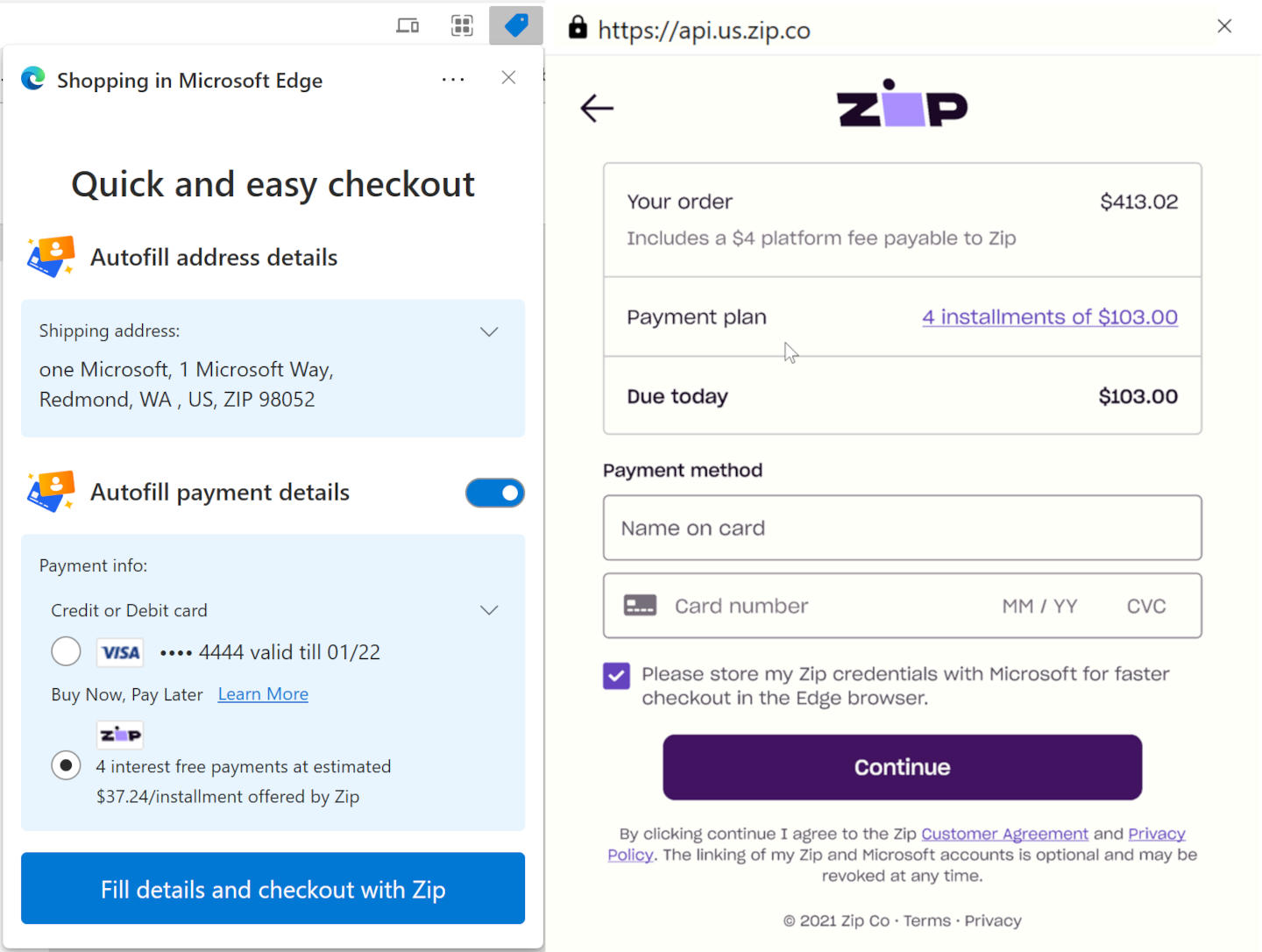 This wouldn’t be the first shopping-related feature that has landed on Edge, but it is the first one that directly deals with an exchange of money. Along with its own programs like Microsoft Rewards, Microsoft seems to be grooming Edge to be a shopping tool rather than a web browser. Unsurprisingly, there are Edge fans that are crying enough is enough over more orthogonal features.

Avid online shoppers might find it convenient that Edge is able to track prices and can now even offer installment plans for purchases, but those features don’t come for free even if you don’t pay a literal dime. As with any activity on the Internet, such tracking requires sharing a bit of yourself to Microsoft, partners, and vendors, and you might not even be aware of that in the first place. If regular browsing activities are already laden with information companies can harvest, online shopping activities are even riper with user data.

To be fair, Microsoft does try to offer privacy controls, and it is even required to do so in some regions like the EU. It doesn’t have the cleanest track record, however, when it comes to protecting its users from less conscientious agents on the Internet. Even worse, these e-commerce features put more and more data into Microsoft’s own hands, giving it even more control over people’s electronic lives beyond just the web browser.

Privacy is a thorny subject today, and while Edge builds on Chrome’s security and privacy features, Microsoft is also free to add its own that circumvents those protections. Of course, you have to implicitly give Microsoft a certain amount of trust if you’re using Edge or Windows for that matter, but handing it too much data increases the temptation to make a profit from it.

It’s only natural that Microsoft will want to distance Edge from Chrome by adding unique features, but there’s come a time when one has to ask whether it’s already too much. This newest BNPL feature, for example, is criticized for being an unnecessary feature that doesn’t have anything directly to do with a web browser in the first place. It could be something integrated into Bing, but not Edge itself.

Ever since it launched as a Chromium-based spin, Microsoft Edge has been flaunting features that, for some, definitely add value to it. Vertical tabs that Google seems to be allergic to, a built-in ePub reader, web-capture tools, and sidebar searches are just some of the crowd favorites. There are also the less visible improvements that Microsoft has made in terms of performance or power efficiency. 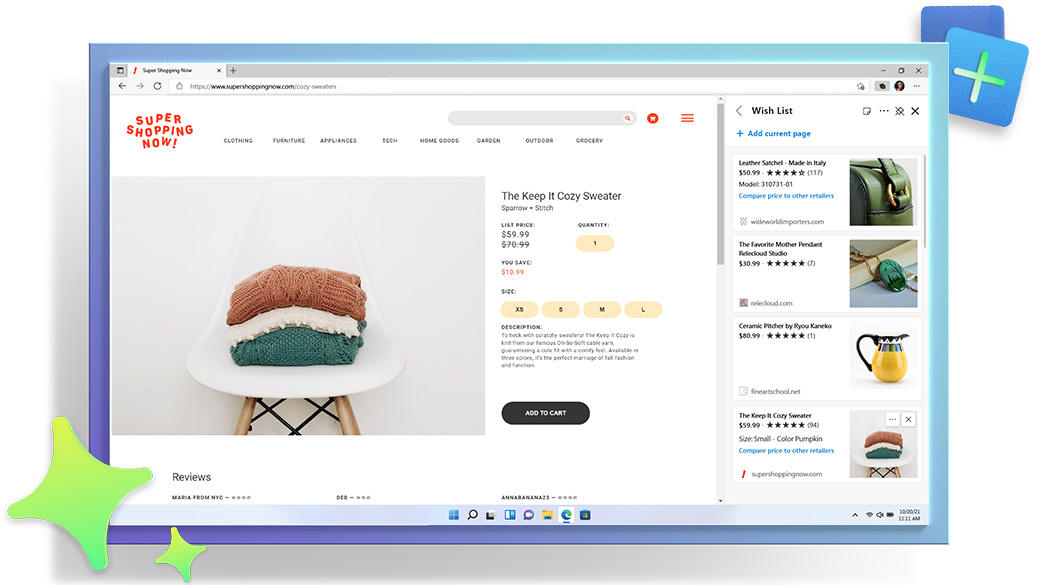 These extra features don’t come for free, though, especially if they’re built into the browser itself. It adds complexity to the software, making it more difficult to maintain Microsoft Edge in the years to come. It can also have some impact on the speed of the browser, as some critics of the Buy Now, Pay Later point out. The wealth of extra features is one of the root causes of Internet Explorer’s fall from grace, especially when those made it more difficult to patch up security holes made by those very same features.

These complaints probably wouldn’t bother Windows users so much if Microsoft made it easy to use the Web browser they prefer. While that may be the case on Windows 10 in the early days of Edge, that is increasingly becoming more difficult, especially on Windows 11. Suffice it to say, Microsoft is making it difficult or at least tiresome to change the default web browser on Windows.

It used to be a simple case of choosing from a list of installed web browsers which one you prefer to be the default. On Windows 11, however, Microsoft has changed the game, and the process now requires a lot of work to make anything other than Edge the default web browser. We’re still hoping things will change for the better soon, and things are definitely looking up based on Insider Preview builds.

That said, there are times when Windows will still default to using Edge, regardless of which browser has been set as the default. That’s most prominent when clicking links inside Windows’ Settings UI or system apps, which can be pretty annoying and jarring. This looks like a bug, but it doesn’t seem that Microsoft sees it the same way.

In addition to trying to keep you from leaving Edge, Microsoft has been pretty aggressive in pushing people to use its browser. Comically, it seems that it still pushes reminders and notifications even if you’re already using Edge as your default, at least if you’re not using Bing at the same time. It’s the kind of incessant attitude that Microsoft has been notorious for, from Windows 10 upgrade notices to the infamous Clippy.

Those pop-ups can come from anywhere, from “ads” in the Start Menu to icons in the taskbar to notifications on web pages you’re visiting. Its latest antic is to warn users when trying to download Google Chrome using Edge, trying to convince users that it’s hip, new, fast, and safe. Unlike others that do use similar tactics (Google included), Microsoft’s pop-ups are more intrusive, more incessant, and more interrupting. 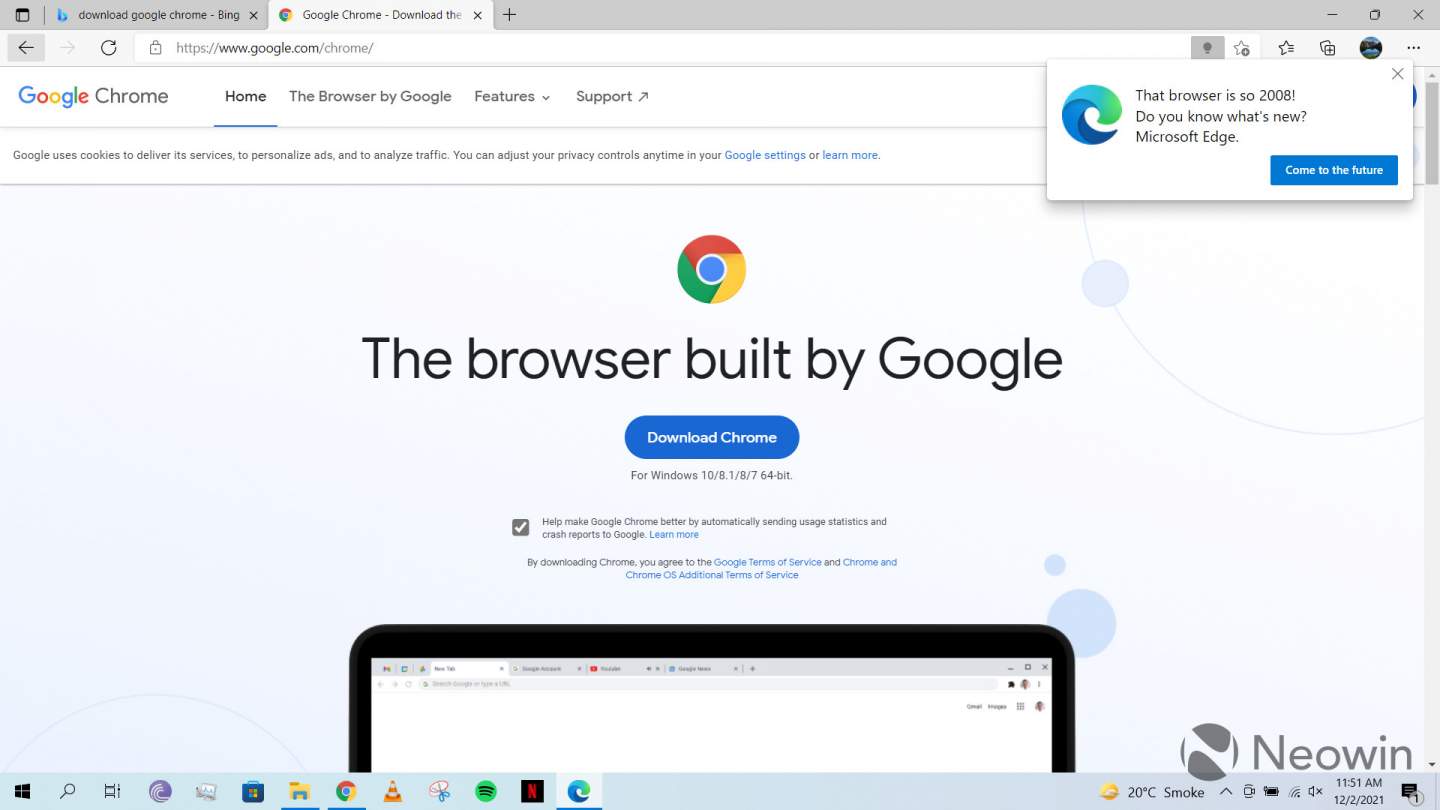 Microsoft’s insistent drive to get people to switch back to Edge or keep them from leaving in the first place is almost laughable, considering it’s the default browser on Windows anyway. In fact, if you upgraded to Windows 10 at some point, you might have been surprised to discover that Microsoft changed the default web browser to Edge without you noticing it. It is that exact behavior that got Microsoft into a lot of trouble in the first place, especially in Europe, where it was forced to divorce Windows and Internet Explorer once and for all.

And yet, here we are again doing the same dance, and perhaps with even bigger, more sweeping moves. Not only is Microsoft making Microsoft Edge an inescapable part of Windows 10 and 11, but it is also integrating Microsoft Edge deeply with its other products, particularly Bing and Shopping. It’s likely that regulators will catch a whiff of it again and try to put a stop to it, but so far, it seems that Microsoft still has free rein.

On some level, it’s understandable that Microsoft would want to have its products integrated so that it could offer a more cohesive and seamless experience. Even Google and Apple do similar, though Apple doesn’t exactly restrain you as much as its rivals. Microsoft, however, is no small company with a clean sheet but is a titan with lots of resources to spare to keep people inside its ecosystem and, more importantly, profit from them.

It’s almost as if the biggest reason to stay from Edge is Microsoft. While the company has made a huge change in direction in the past years, it seems to be resorting to its old tricks again. It has been notorious for sometimes underhanded tactics and outright aggressive marketing, which naturally leaves a bad taste in people’s mouths.

It’s definitely a shame because Microsoft Edge seemed poised to actually change the web browsing landscape. Although still based on Chromium like many other browsers, Edge was starting to shape up to threaten the other big players, including Chrome and Firefox. It offered a solid set of features that did provide value at no extra cost, making it seem like Microsoft is truly listening to its users. 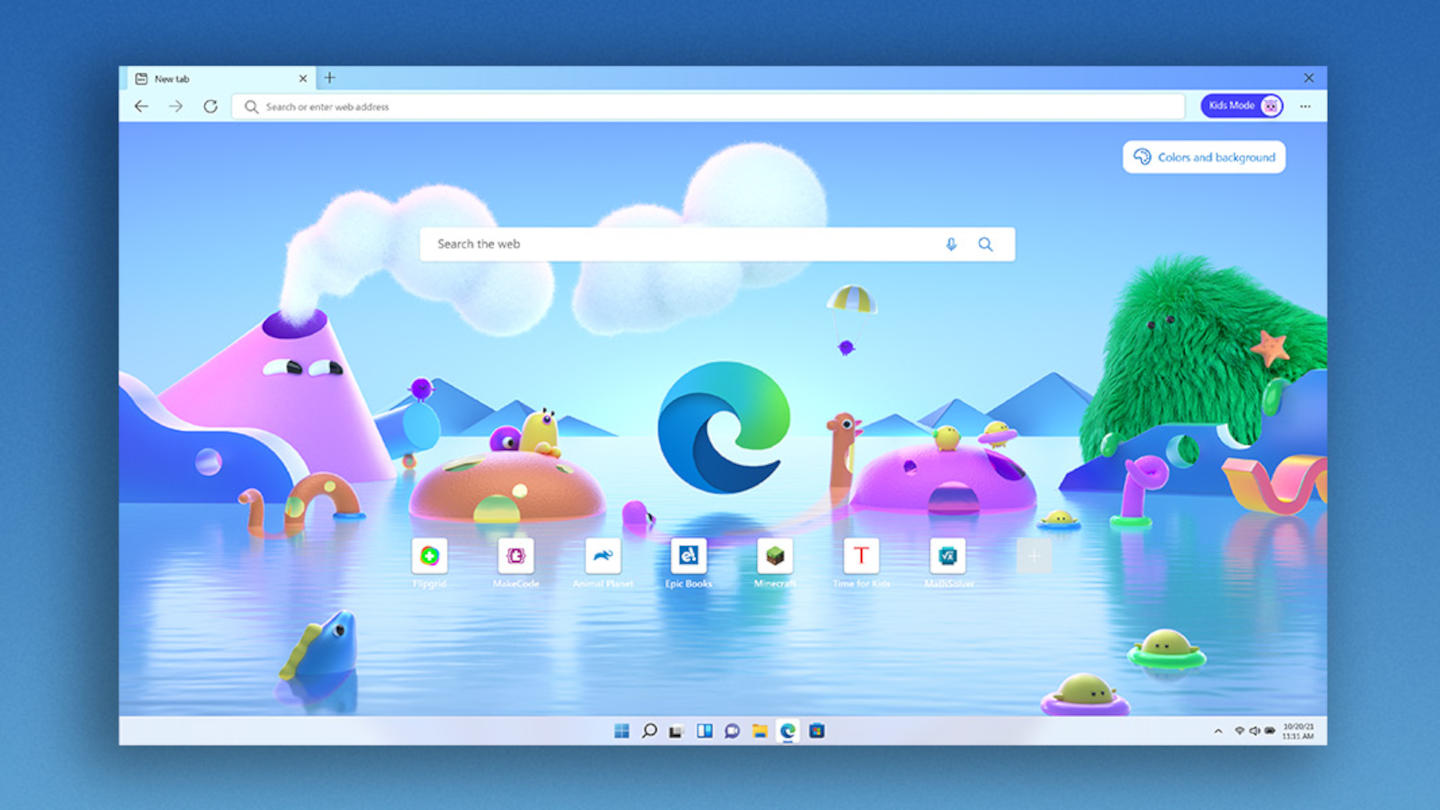 Now, however, even Edge’s fans are starting to question the browser’s direction. Edge is becoming a bloated mess with features that few ever asked for. It’s not too late for Microsoft to change course, especially if it turns some of these features into extra addons that only those interested will have to install. Unless someone, like regulators, forces Microsoft’s hand, that may never be the case.