7.5-inch e-paper display gets both data and power from NFC

There has been a small but prominent rise in interest in e-paper technologies like E-Ink due to their simplicity, energy-efficiency, and extensibility. Tablets and even phones using this kind of display are no longer unheard of, though rare, and that represents just one innovation in that field. Another, courtesy of a company named “Waveshare” is looking into how digital paper screens can operate without any batteries. All they will need is an NFC receiver.

Electronic paper or e-paper is popular not just for putting virtually no strain on the eyes. They also barely need any power to operate, requiring electricity only when the need to refresh or change the contents on the screen. In other words, they don’t even need batteries as long as power is applied just at the moment it is needed.

Fortunately, there is a technology that does meet that requirement. NFC or Near-Field Communication is often thought of as a short-range wireless data transfer technology. However, those NFC signals also carry power with them and, in some configurations, can be enough to power a 7.5-inch 800×400 display like Waveshare’s. 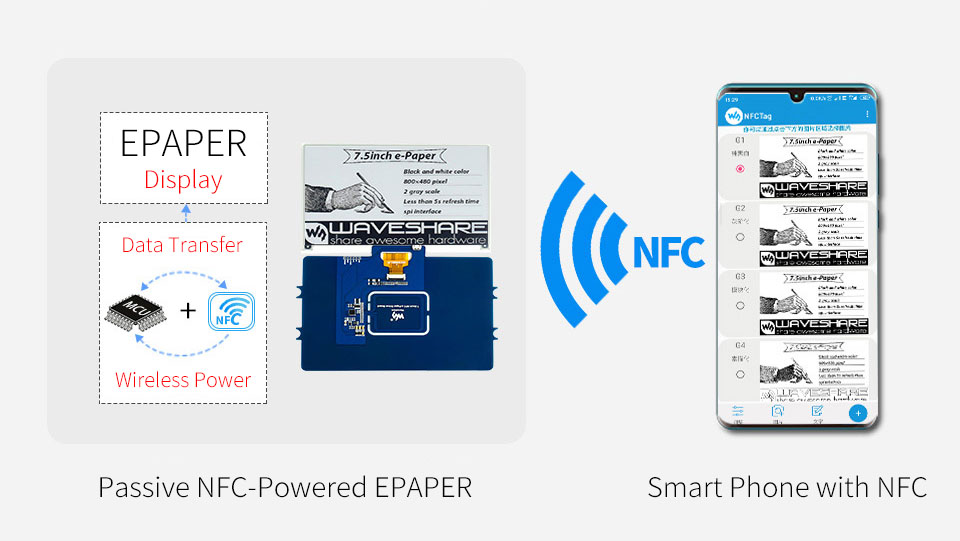 The idea is that a battery-free and wireless e-ink screen like this would get both its image data and the power to refresh the screen from the same NFC-powered device, be it a smartphone or a dedicated gadget. The refresh speed of the display depends not only on the resolution but also on the power being output by the device. In some cases, even a smartphone might not deliver enough power to make it work.

The technology is hardly going to make e-book readers a lot lighter and thinner but it could open opportunities for signboards and displays in offices or even hospitals. It is definitely a cheap way to have a less permanent and less static display that doesn’t cost any power, as long as you won’t need to update the screen’s content every minute or so.