What is there to say about a car like the 2017 Rolls-Royce Dawn, an ultra-luxury convertible whose price tag can easily approach a half-million dollars? It’s certainly easy to run out of superlatives when discussing the Dawn (which replaces the Phantom Drophead Coupe as the ragtop of choice in the British brand’s showroom), as the car is rarefied air even in the world of the billionaires who park them in their air-conditioned 10-vehicle garages.

It also happens to be the best convertible I have ever driven. The astounding level of craftsmanship and engineering that has been poured into the Rolls-Royce Dawn is unmatched. When you’ve grown weary of what Mercedes-Benz and Aston Martin have to offer in terms of a full-size drop-top, the Dawn is waiting to demonstrate to you the next step in open air driving.

Check out these 5 things you need to know about the 2017 Rolls-Royce Dawn. 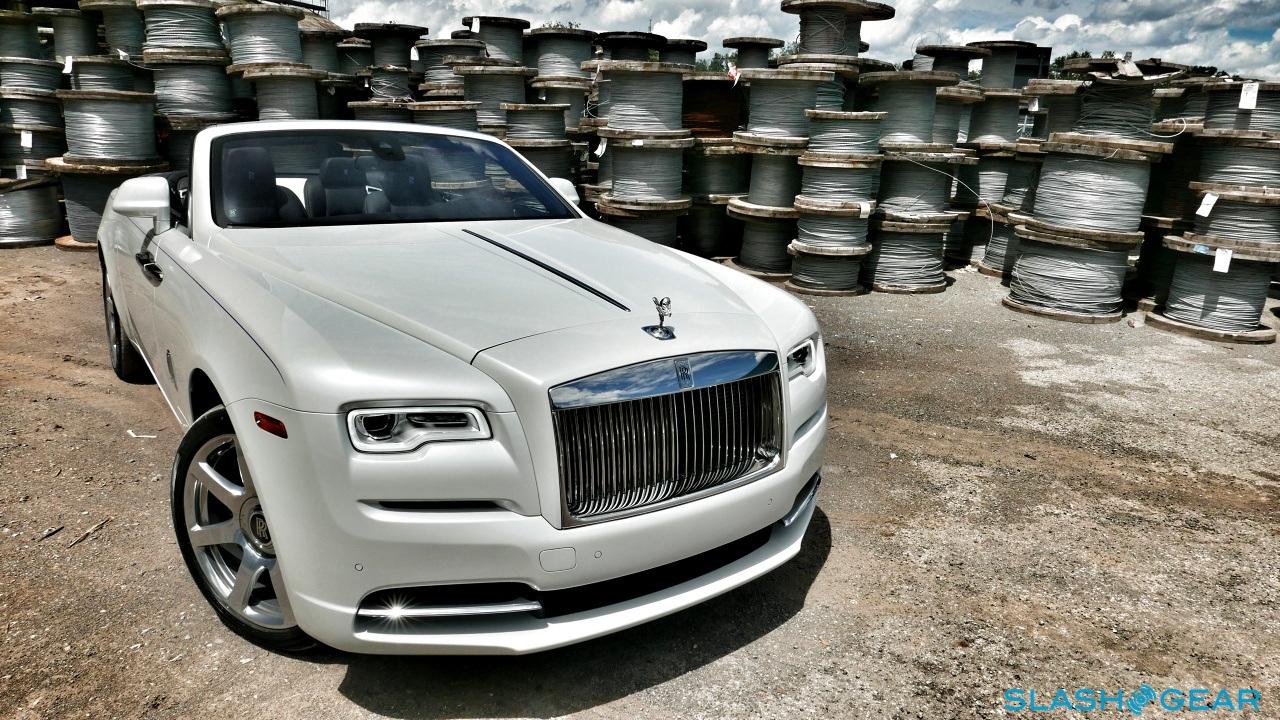 Convertibles – even those from high-end brands – are typically forgiven if their occasionally rattle their cowls across rough roads. Lopping the roof off of any automobile typically introduces a level of flex in the body structure that is absent from a coupe or a sedan, but in the Rolls-Royce Dawn there is not a hint, whisper, or echo of complaint from the car even when tackling the horrors offered by Montreal’s crumbling infrastructure.

With the top down the car feels as though it has been hewn from a single block of whatever metal you personally hold in the highest regard: titanium, aircraft-grade aluminum, lead, adamantium. In reality it’s primarily steel, which accounts for the convertible’s stupendous 5,000-plus pounds of curb weight, and while the car is based on the same platform as the Wraith coupe, Rolls-Royce claims that 80 percent of the body panels have been altered from its fixed-roof sibling. Those rear-hinged doors on either side of the car also help to preserve the vault-like ride of the Dawn without the need to add huge amounts of body bracing, because their not-insubstantial mass is cantilevered from the rear of the car rather than the weaker area just under the A-pillar.

2. Effortless, Thy Name Is Rolls-Royce 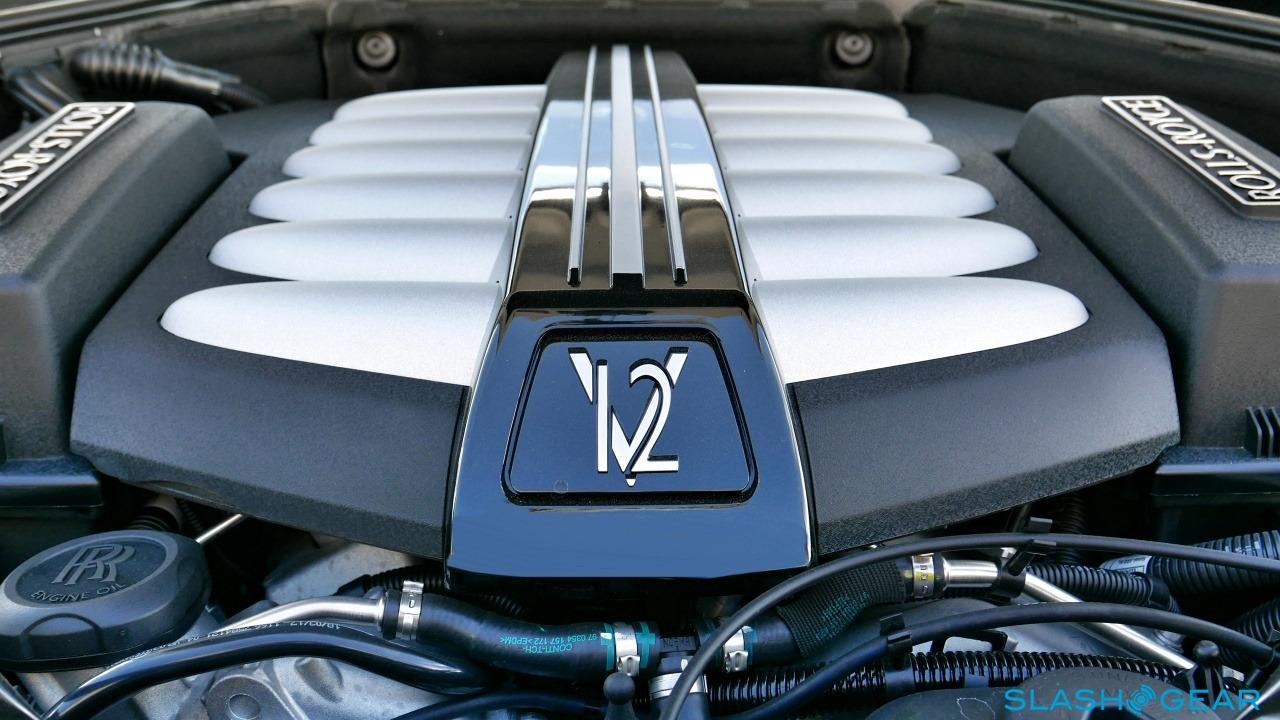 Typically, a car as massive as the Rolls-Royce Dawn would be crucified for tipping the scales with such lusty enthusiasm (and indeed, Rolls-Royce has committed to moving to aluminum-intensive designs in the near future). The truth is, for a car like the Dawn these portly proportions only add to the overall experience, as the yacht-like sensation while at the tiller is part of its massive personality projection. It also doesn’t hurt that lurking under the convertible’s forward bow is a BMW-designed 6.6-liter, 12-cylinder engine that’s been twin-turbocharged to produce 563 horsepower and 575 lb-ft of torque.

With that much thrust at your command the Rolls-Royce Dawn never feels wanting for power, and it feeds into the brand’s reputation for providing effortless acceleration in any driving situation. The car will eclipse the 60-mph mark in a shocking 4.3 seconds, but chances are you won’t notice just how fast the Dawn is traveling because the cabin remains the epitome of calm at all speeds – and the vehicle’s eight-speed, GPS-linked automatic transmission has already plotted out each and every gear-change for the road ahead to add an extra layer of smoothness to the ministrations of your right foot.

3. Simplicity As A Virtue 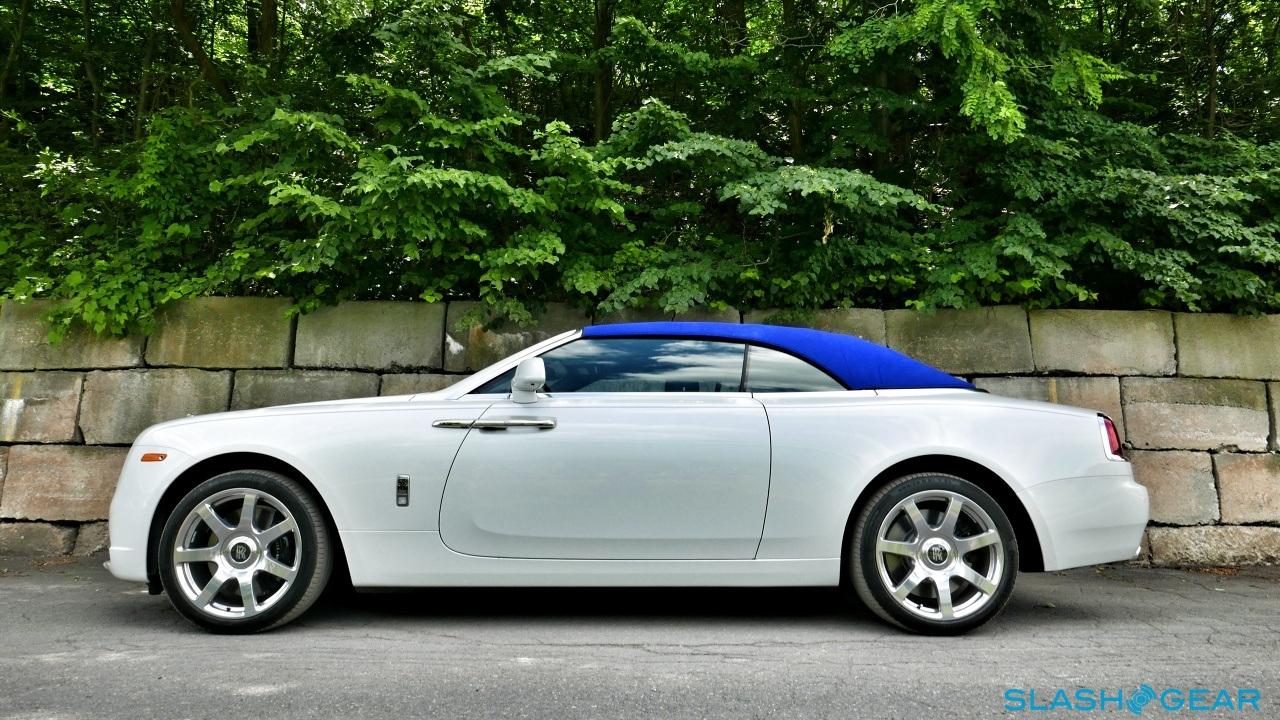 You might expect such an expensive automobile to be packed with advanced, high-tech features, but that’s really not the case with the Rolls-Royce Dawn. Rather than overwhelm the driver with gear, the designers at Rolls have included a comprehensive subset of the equipment you’d want in a luxury car, and kept much of the ‘look at me’ technological grand-standing – holographic displays, gesture controls – off of the menu.

There’s a perfectly adequate stereo, an infotainment system based on BMW’s iDrive (featuring a rotary controller), heated and cooled seats, multi-zone climate control, self-closing doors (operated by buttons located just inside the A-pillar) and of course umbrellas custom-fit into the front fender that can be popped out should rain be in the forecast. The Dawn also offers a tapered fabric roof to help you further deal with inclement weather, and it preserves much of the silhouette of the Wraith when it’s fixed in place (via a 22-second automated dance that takes place at the touch of a button). 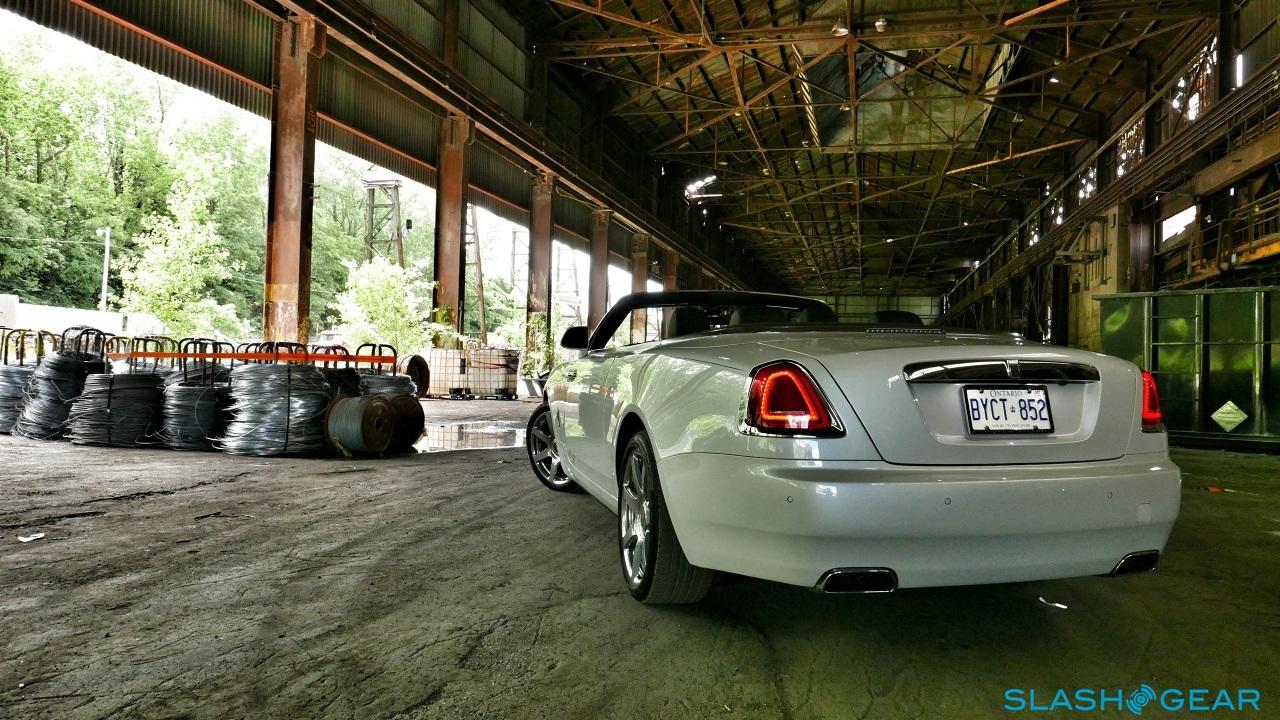 Underscoring the focused, deliberate design of the 2017 Rolls-Royce Dawn is the complete absence of anything that could be construed as self-driving technology. If you want someone else to drive the Dawn for you’ll have to get a chauffeur – don’t expect a phalanx of computer systems to take over from that most traditional of Rolls-Royce related employment opportunities. Yes, the car has a blind spot warning system, combined with an adaptive cruise control feature, but missing is any digital interference with the steering wheel. This is honestly what I prefer in a car of this pedigree, which is fully intended to be driven and appreciated by a human being. The Dawn may be transportation, but there’s nothing casual about any aspect of the vehicle, and that extends to the attitudes surrounding who, rather than what, is doing the piloting. 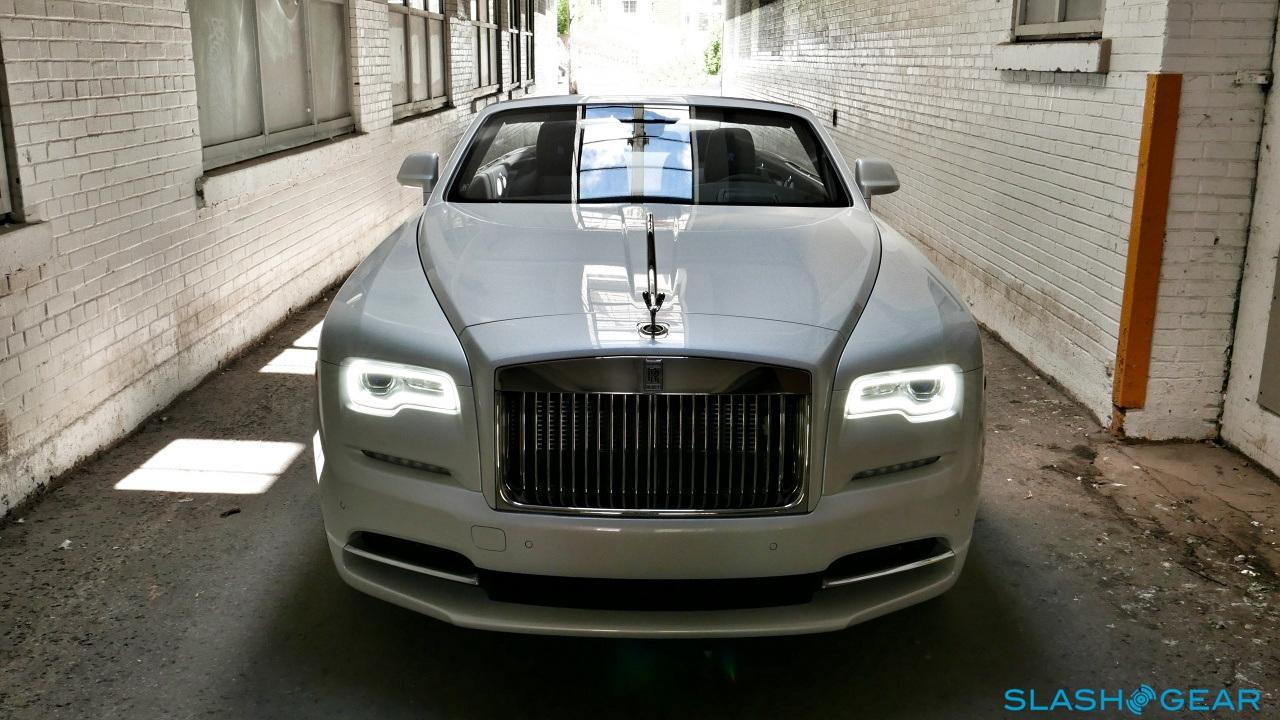 It’s difficult to come up with a peer group for the Rolls-Royce Dawn, for a number of reasons. Obviously, one of those reasons is itself a number – the $341,124 base price of my tester, which inflated to $390,000 via the addition of a modest amount of options. There are not many other drop tops out there advertising similar price tags, and those that are tend to fall into the high performance crowd, such as the Aston Martin Vanquish (roughly $300k), and of course special edition Lamborghinis like the Aventador LP750-4 Superveloce (over half a million). Even the Bentley Continental GT Speed and Mercedes-AMG S65 cabriolet are higher-strung, tech-stuffed hot rods as compared to the calm grace and poise of the Dawn, leaving the Rolls-Royce essentially in a class of one. 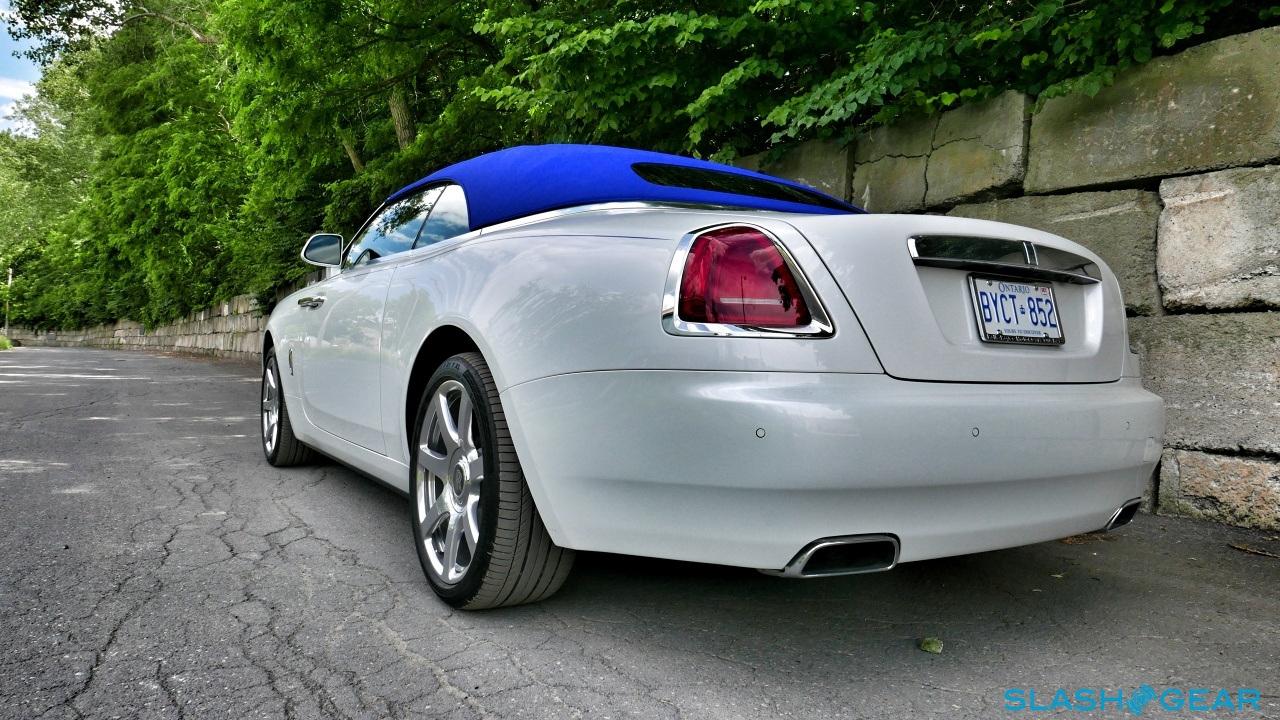