Mazda isn’t going to build a coupe version of its iconic MX-5 Miata roadster, so please stop asking. What it will do is try to dip back into the nearly 50/50 split it had on the previous-generation Miata between soft-top and power-retractable hardtop models by way of the Mazda MX-5 Miata RF. Those two letters stand for ‘retractable fastback,’ and signal to buyers that this unique take on open-air motoring is as close to a fixed-roof Miata as you’ll find in the automaker’s current showroom.

Not quite a coupe and certainly not a traditional convertible, is the RF charming enough to attract the same level of interest from Miata buyers as the now-departed PRHT did? Check out these 5 things you need to know about the 2017 Mazda MX-5 Miata RF.

1. Stunning Looks, With The Top Up 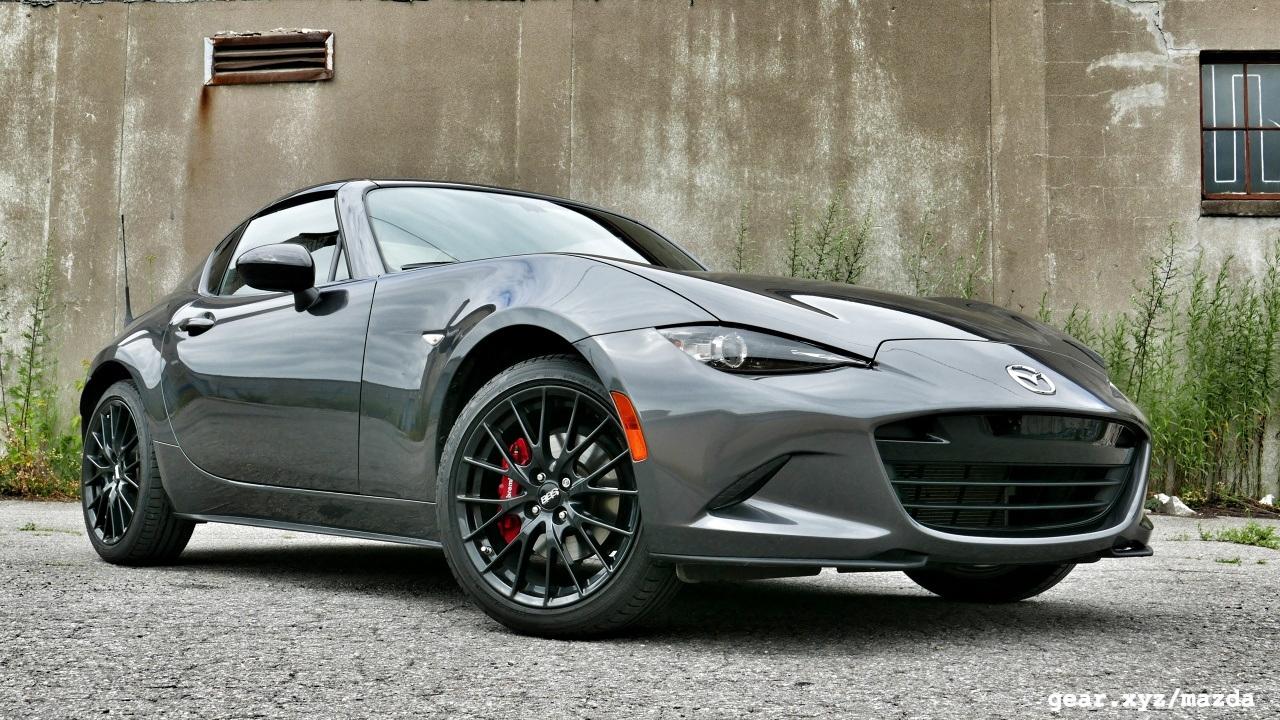 The only Miata ‘coupe’ to ever leave the factory was based on the second-generation NB version of the car, and the closest North Americans got to that model was a concept vehicle that most recently made the rounds of the show circuit in a bid to drum up excitement for the RF’ launch. Without a doubt, the 2017 Mazda MX-5 Miata RF is a far better looking automobile from almost every angle – as long as the top is in place. The flying buttress design of the car’s rear pillars, its deeply-inset rear glass, and the smooth curve of its roofline work perfectly with the rising rear fenders and the curled-lip of a deck lid (no surprise given that the retractable fastback concept was in the mix from the very beginning of the latest Miata’s development). My Club model also rode on distinctive BBS rims hiding red Brembo calipers, both of which played nice with the car’s Machine Gray Metallic paint.

With the top open the esthetic gets a bit more muddled. Seen head on or from the back the car makes a decent enough impression, although the glass wind-breaker sitting under the roof arch is somewhat busy. In profile, however, the MX-5 Miata RF looks stubby somehow, almost unfinished. Short-wheelbase targa-style designs like this one always remind me of the Honda Del Sol or the Fiat X1/9, vehicles whose proportions just didn’t feel like a good match for the two feet of open air above the cockpit. It’s not an ugly car with the roof open by any means, but the difference in grace and form between coupe and convertible modes is noticeable.

2. Just As Exciting To Drive As The Soft-Top Miata 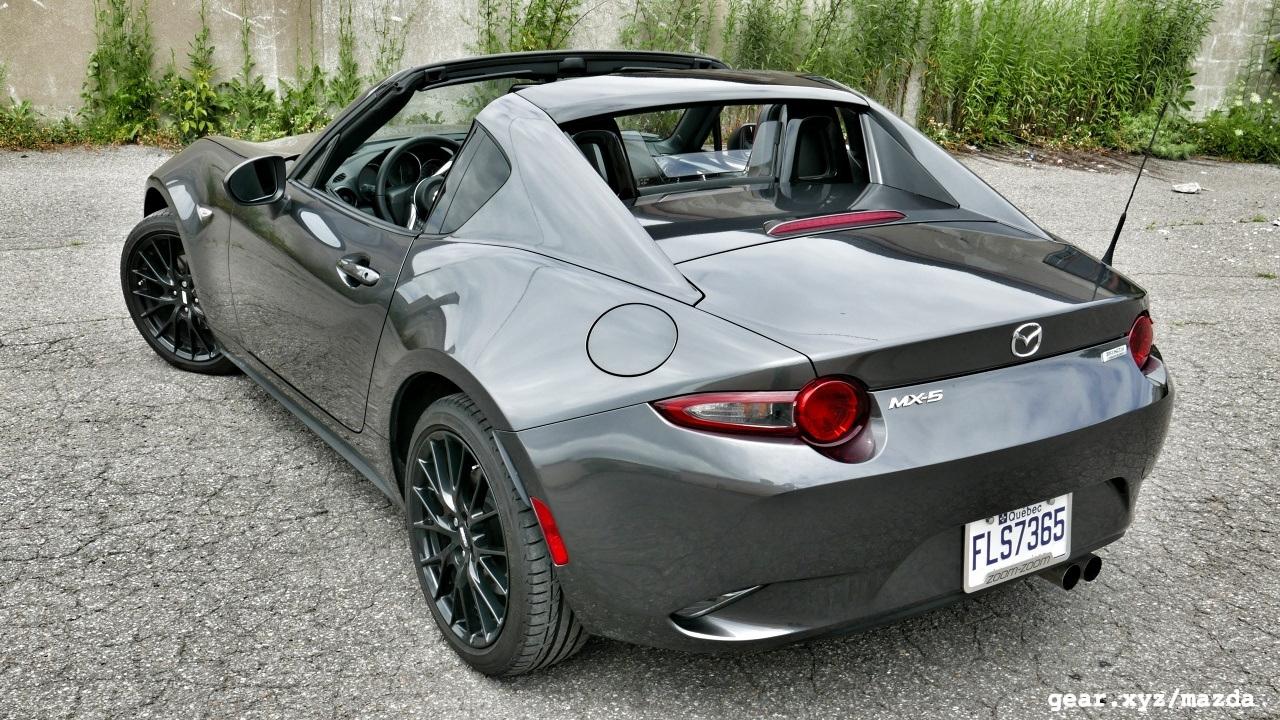 The Mazda MX-5 Miata is one of the most fun-to-drive automobiles on the market, and the RF does nothing to appreciably dilute this reputation in a street setting. With a lightweight design (just over 2,400 lbs as tested), a 155 horsepower, 2.0-liter four-cylinder engine, and a friendly chassis, the MX-5 Miata RF can be run through its six forward gears with relative abandon, generating thrills while staying within legal speed limits. My tester came with a manual transmission, but there’s a six-speed automatic also available for those who want to enjoy a more relaxed Miata experience. You’re looking at 60-mph from a standing start in just a tick over six seconds, but you owe it to yourself to unleash the RF on curving secondary roads rather than just blast around in a straight line. The new hardtop model features improved electric power steering tuning (my biggest complaint with 2016’s soft top) and slightly revised suspension tuning to deal with what I’m about to discuss in the next section. 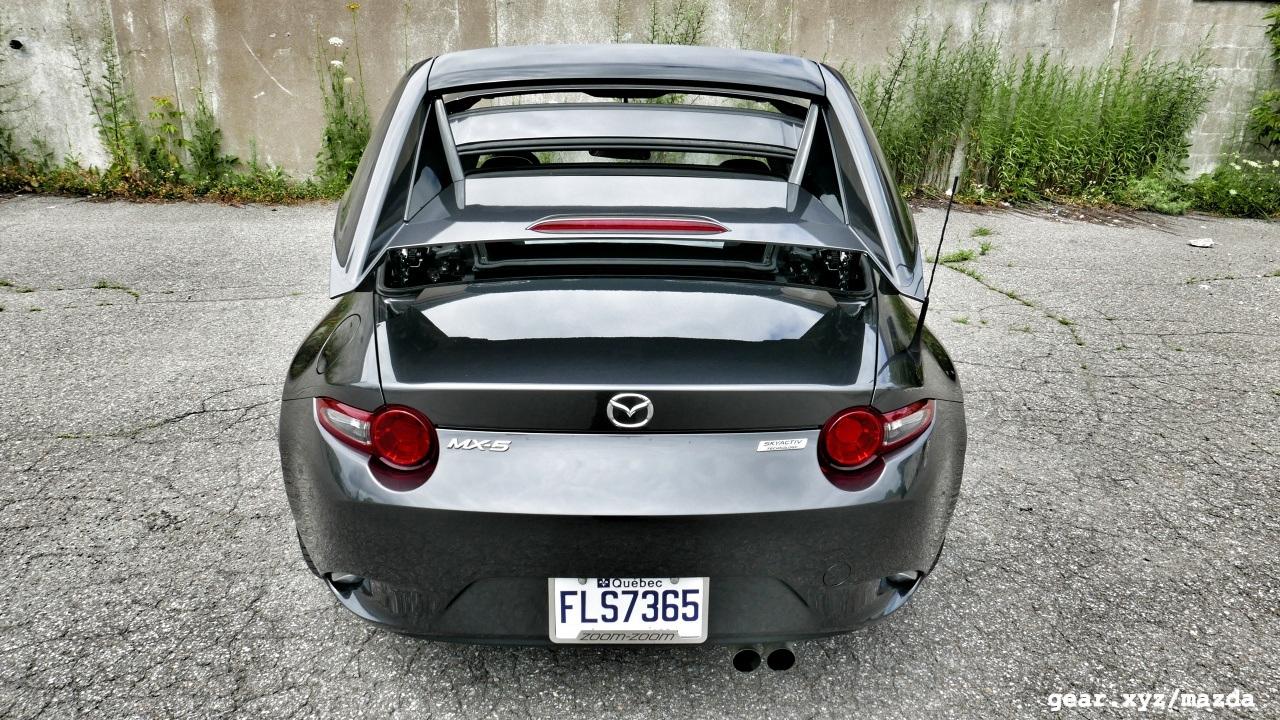 Why did Mazda update the MX-5 Miata RF’s swaybars and rear springs? Because it’s heavier. Not monstrously so, of course – 113 lbs – but all of it can be found in the vehicle’s retractable roof panel mechanism, which operates automatically at the touch of a button. There was a weight difference between the soft top and power-retractable hardtop Miatas from the previous generation too, albeit a more modest (77 lbs) one, so this isn’t new territory for Mazda or its customers (and in fact the new roof mechanism borrows substantially from the PRHT).

Still, it gives me pause. Part of the fun of the Miata has always been its vociferous dedication to remaining lighter than almost any other roadster on the market, a trend that continues in 2017 with the astonishing sub-2,300 lbs curb weight of the base MX-5 roadster. The RF is a step in the other direction, its roof a conceit that is not only significantly more complicated in its operation than the unclip-and-toss-back manual soft top, but one that adds weight in pursuit of style and, perhaps, some foul weather fortitude. Despite driving nearly the same, spiritually, the overall RF design decision feels somewhat un-Miata to my sensibilities. 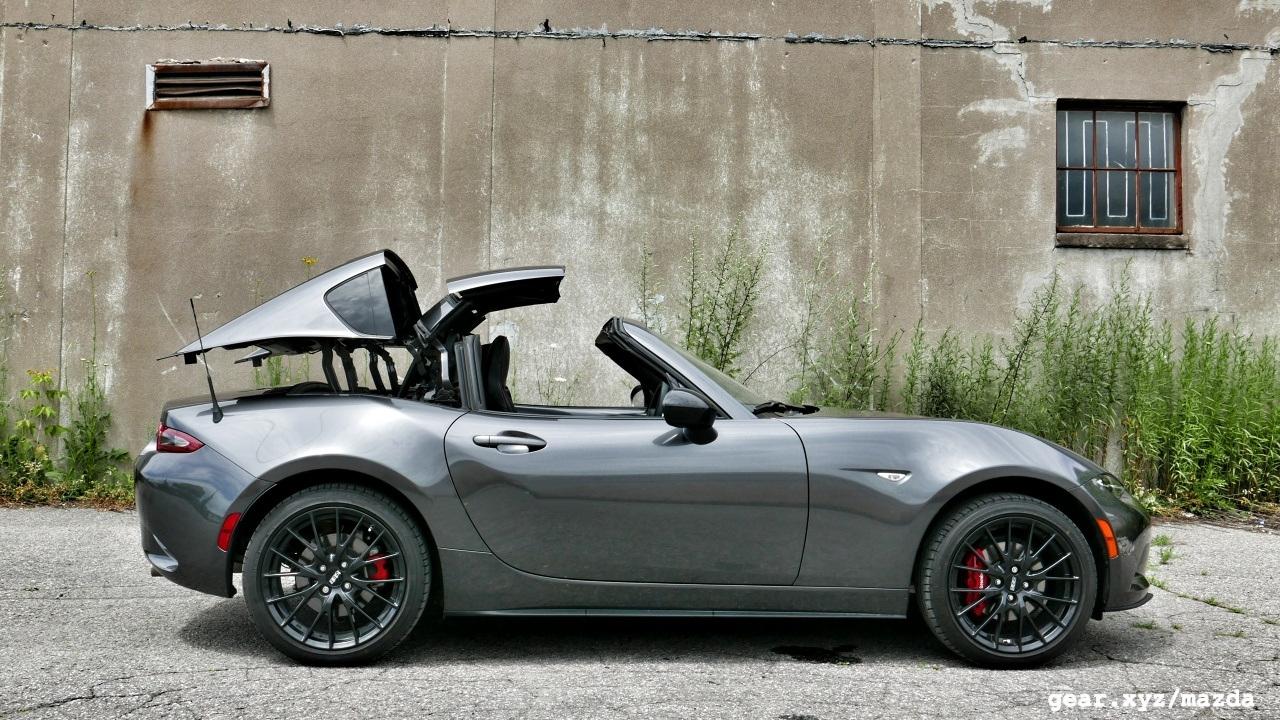 One last weird bit of a disparity between roadster and the RF is something I hadn’t anticipated. With the roof up, the MX-5 Miata RF’s cabin feels reasonably-sized, at least for my 5’9″ frame (and it offers the same 4.9 cubic feet of trunk space as the soft-top). Once the roof panel has been auto-magically stowed, however, I couldn’t help but feel hemmed in by the buttresses towering directly above me. The sensation was a strange one that had the net effect of shrinking the cockpit around me and making me acutely aware of its dimensional limitations, in direct contrast to the free and open vibes found in the standard Miata. 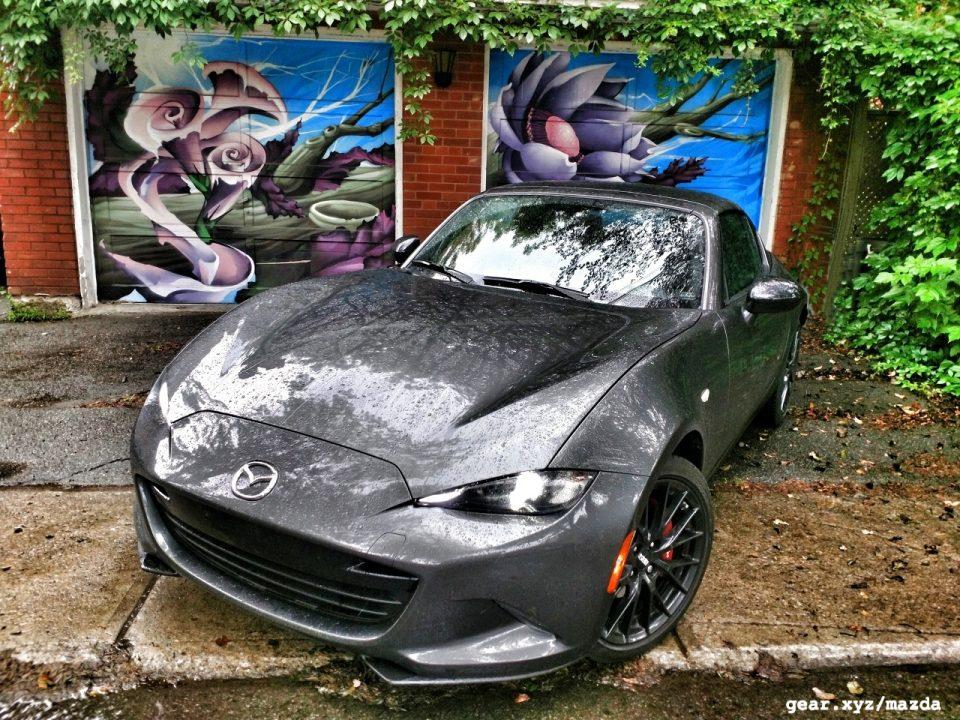 The most affordable version of the 2017 Mazda MX-5 Miata RF starts at $31,555, which works out to roughly $6,640 more than what you’d pay for the entry-level version of the soft-top. It’s not an apples-to-apples comparison, however, because the RF starts at Club trim, which actually represents the mid-tier version of the standard roadster. Club versus Club, you’re still paying a premium, but it’s a more manageable $2,755.

Still, you’re going to have to shell out more for the RF model, which means you’ll really have to want it to justify spending the extra cash on a car that’s heavier and offers a somewhat more restrictive cabin than its across-the-showroom-floor sibling. Yes, the car looks amazing with the top up, and sure, it adds an extra degree of winter capability to the Miata that’s perhaps missing from the soft-top, but spiritually it’s a lot farther from the power-retractable hardtop model that it would at first seem. It remains to be seen whether the PRHT crowd will flock to the RF, or if will attract a new breed of Miata customers.

Were it my money, I’m split: the RF’s top-up charisma is undeniable, but once it’s down I vastly prefer the open feel of the original roadster design.