3D Zelda remake is playable in your browser

When I grew up, there was only one console in my house for many years. It was the original NES, and it provided my brother and I with countless hours of entertainment. One of our favorite games to play was the original Legend of Zelda. It was the first RPG that I ever played, and it still holds up as a great classic to this day. And now you can play it in your browser.

If you head over to Zelda30Tribute, you’ll find an interesting version of the classic game available to play. Instead of the classic top-down look, it’s more of a 3/4 perspective. This works well, because the whole game is now rendered in 3D. despite the new dimension, it retains its blocky 8-bit look.

The game runs pretty well in my browser, and even plays just fine on my phone, though the audio wasn’t working there, for some reason. There are three working dungeons, which you can explore, just like in the original. You’ll run into some bugs, such as shops just handing out items, rather than needing to actually pay for them. And some rooms will throw up clever errors. 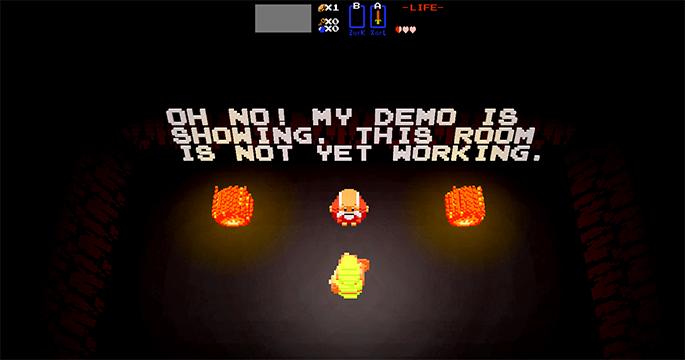 All of the work appears to be done by two individuals, Scott Lininger and Mike Magee. It’s hard to say how long this project will stay up, as Nintendo very well might not like seeing their classic made playable for free online. Here’s hoping that the two are able to finish the game though, as I wouldn’t mind playing through the entire game like this.