If you plan on going to outer space someday, it might be on Richard Branson’s aircraft. Maybe once you get up there, you’ll feel the need to celebrate — you’re in space, after all. That doesn’t happen daily. Rather than drink from some sort of pouch meant to hold TANG, a new Martini glass might be what you’re looking for.

The glass, which is currently in beta form as a 3D printed model, uses a series of ridges to prevent liquid from floating up and out of the glass in zero gravity, relying on a liquids natural capillary action. There are also a series of ridges that aim toward the top edge of the glass, so you can actually drink what’s inside. It even kind of looks Klingon, in addition to clinging onto your drink! 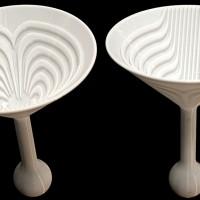 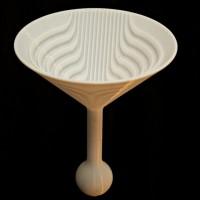 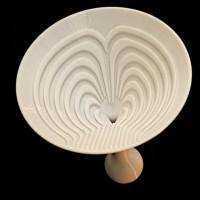 The glass is part of the Zero Gravity Cocktail Project, which the Cosmic Lifestyle Corporation hopes will serve to show space travel doesn’t have to be as geeky as we might think. Project founder Samuel Coniglio says “By creating a fun object that appeals to many people, we hope to show that space tourism is not an abstract concept but a stepping stone for improving the way people live, work, and play beyond planet Earth”.

Want to get even more Jetsons about it? The Cosmic Lifestyle Corporation (which even kind of sounds like Cogswell Cogs) has a “Drinkbot”. The mechanized device will mix and dispense drinks right into your specially designed glass. Space travel just got a lot cooler.