When humans colonize Mars, they’ll first be living in shelters that provide the environment necessary for survival. NASA is trying to jumpstart the development of those habitats with its 3-D Printed Habitat Challenge, and we’ve seen various concepts that hint at what one day may be called home. French entity Fabulous has unveiled its own 3D-printed Mars shelter, which was spurred by NASA’s competition; it is called Sfero, and it is designed to use materials available on Mars.

From the outside, Sfero looks like a little like an igloo, and a little like a glass-pocked rock. A long tunnel leads into a two-level living shelter, however, which includes a lower level serving as a sleeping room, an upper level for daily tasks, and a balcony of sorts for growing plants. 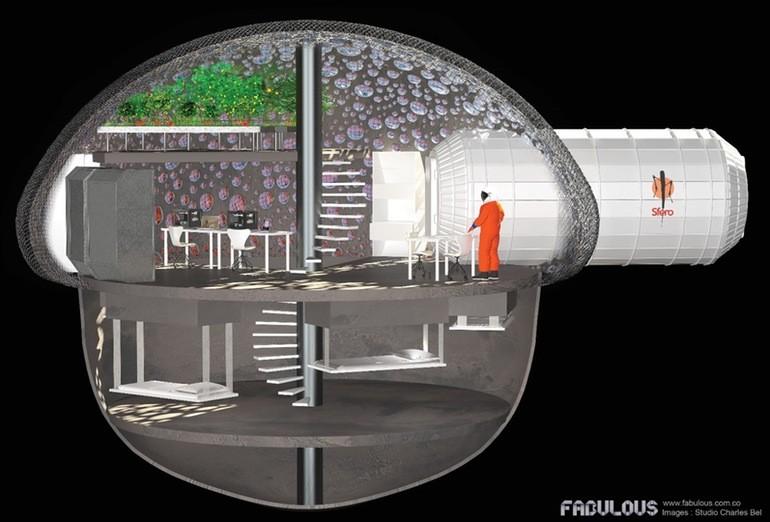 The main floor would be 312sqft in size, including the inner most portion of the airlock tunnel and a bathroom, while the lower level would be 430sqft. The growing space is the smallest at 32sqft. A spiraling staircase, finally, would connect all three sections.

The center pole shown in the photo above would be drilled into the landscape to permafrost, which would “be liquefied for feeding the aqueous pocket.” The habitat would be made using metal-based 3D printing technology, with iron from the environment potentially being one of the building materials.