The folks at 3ality Technica have revealed their next-generation stereoscopic 3D system Helix to further their dominance in the Smart 3D market. This device is effectively an ultra-precise rig which allows two cameras to be aligned with sub-pixel accuracy, 3ality Technica doing this in a way that also allows the whole setup to bring a 2D shooting schedule (relatively fast) to the 3D filming world (generally too slow to realistically work with in a real Hollywood-deadline environment.) The Helix is the newest product made by 3ality Technica and is made specifically work with the rest of their 3D suite of products.

For those of you looking at the image above still completely confused about what it’s made for – don’t worry, you’re not alone. This equipment is not made for your everyday hobby camera aficionado. Instead it, like it’s close relatives also created by 3ality Technica, are made for big-name productions spanning Hollywood Films, sports, and music concerts. The Helix is made from some fabulously well-picked materials: magnesium, carbon fiber and aluminum, and is being compared to two previous products 3ality Technica has already produced, the TS-5 and the Atom: both of them pictured below:

The TS-5 is product known for its precision and automation abilities, as well as its relatively small size – just 17 pounds on its own. The Atom is also a compact setup, this time being called upon for its configurability and user-friendliness. These factors have all be integrated into the Helix, a product made to showcase the skills of both of the best of the best in 3ality Technica. This product is the first to showcase the full power of the company which up until recently was two separate entities: 3ality Digital and Element Technica.

In late 2011, these two companies came together to wholly dominate the world of Smart 3D, the greatness of their combination being showcased here with the Helix and the software (and hardware) it’s made to work with best. 3ality Technica is also introducing the IntelleSuite enhanced control and automation software set this week, IntelleCam, IntelleCal, and IntelleMatte working with the Helix to create what 3ality Technica says is “the most intelligent system of professional 3D camera platforms.” 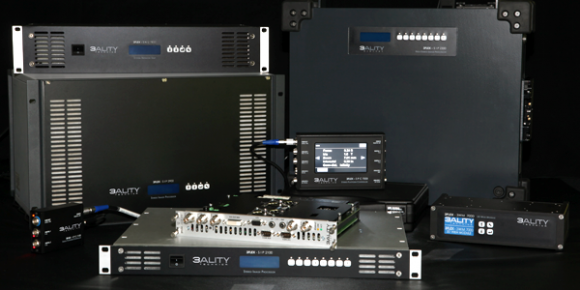 Of course this all needs a bit of brain power behind it, so 3ality Technica is of course showcasing their SIP 2100 system along with the whole setup. The SIP (Stereo Image Processors) is “the definitive” stereo video processing device for High Definition digital video streams. These processors are made to work all over, from production to post-production to distribution environments and back again. These processors working with the software and the hardware introduced this week will have 3D movie makers leaping for joy in the near future – you just wait!