35% of Smartphone Users Launch Apps Before Getting Up

We all know how easy it is for a smartphone to become welded to your hand. It seems that many users can’t even get out of bed without checking in on their beloved phone first. A survey by telecom equipment maker Ericsson (the PDF is here), finds that 35 percent of iPhone and Android users in the US use non-voice applications before they even step out of bed in the morning. The most popular app launched before getting up? You guessed it. Facebook.

Other popular times to use Facebook from a phone? After getting up in the morning, at lunch, late afternoon, early evening, and late evening. So pretty much all the time, in other words, except for when people first get to work in the morning. Overall, the most popular times for using social networking apps were late evening at 34%, and lunchtime, at 26%. 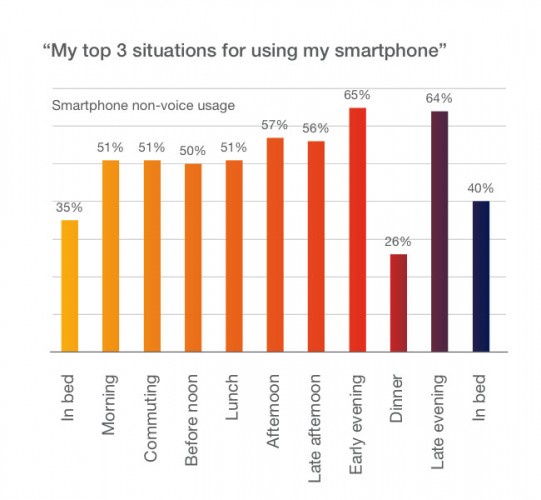 “Our research found apps are appealing to people at an emotional level,” said Ericsson ConsumerLab heard of research Michael Björn, in a statement. “Consumers become attached to a certain set of apps that makes them feel more in control of their lives, and turns everyday chores into positive experiences. Apps even give consumers a new sense of freedom; if a new situation arises, there’s probably an app out there that could help them.”

Ericsson found that the apps themselves are more important than the device people are using. They call this “app culture”. Apps make it easier for us to quickly access the information we’re looking for, without having to think about it too much. Before smartphones, people would use the internet for large chunks of time during the day, but now with smartphones we can hop on for quick sessions any time the impulse strikes us. Whereas before, you would need to turn on the computer, find a bookmark, enter an address, maybe log in, and then finally get where you were going, now, all you need to do for many purposes is open up an app.

So, what about you? Do you bust out the smartphone before you even set foot out of bed? Where do you go first?