3 things Rosetta and Philae taught us about comets

As we bid farewell to the comet lander Philae for the last time, we look back and remember three important things we learned from the ESA’s monumental mission. Several firsts were achieved by this lander sent to a comet by the European Space Agency’s Rosetta mission. One: this was the first time that a craft such as this was successfully landed on a comet – not only that, but the first time such a lander was able to send back data on a comet from its surface, too!

The comet goes by the name / code 67P/Churyumov-Gerasimenko, and aboard is Philae, headed toward its ultimate doom. Philae drifts off to sleep, in temperatures too cold to function, with light so little, the solar-powered craft can no longer live.

Eventually Philae will be joined by its best buddy Rosetta as it too runs out of energy and crashes into the comet. Together they will travel for the rest of time – or until they crash into another space body, which is entirely possible and basically inevitable.

In November of 2014, Philae reported back that it’d found organic molecules on the comet’s surface. These organic molecules contained carbon, pointing toward a distinct possibility here on Earth – a theory given a bit more fuel.

ABOVE: Rosetta and comet’s position as of February 12, 2016, according to “Where is Rosetta?”

These bits of carbon suggested that it was possible that life on Earth was brought in on a similar piece of rock, blasting through space from god knows where to land on Earth, creating an entire civilization of aliens – us!

“We have discovered organic compounds which play a key role in the prebiotic synthesis of amino acids and sugars, which are the ingredients for life”, said Markus Bauer of the ESA, who spoke with CSMonitor this week about findings the craft had made.

2. Pyramid-swallowing sinkholes can form on even the hardest of space bodies

In July of 2015, the Rosetta mission showed a collection of super massive sinkholes.

While much of the planet turned out to be extremely hard, lead researcher Jean-Baptiste Vincent hypothesized that these pits appeared due to jets of surface-collapsing dust formed by the extremely nearby sun. 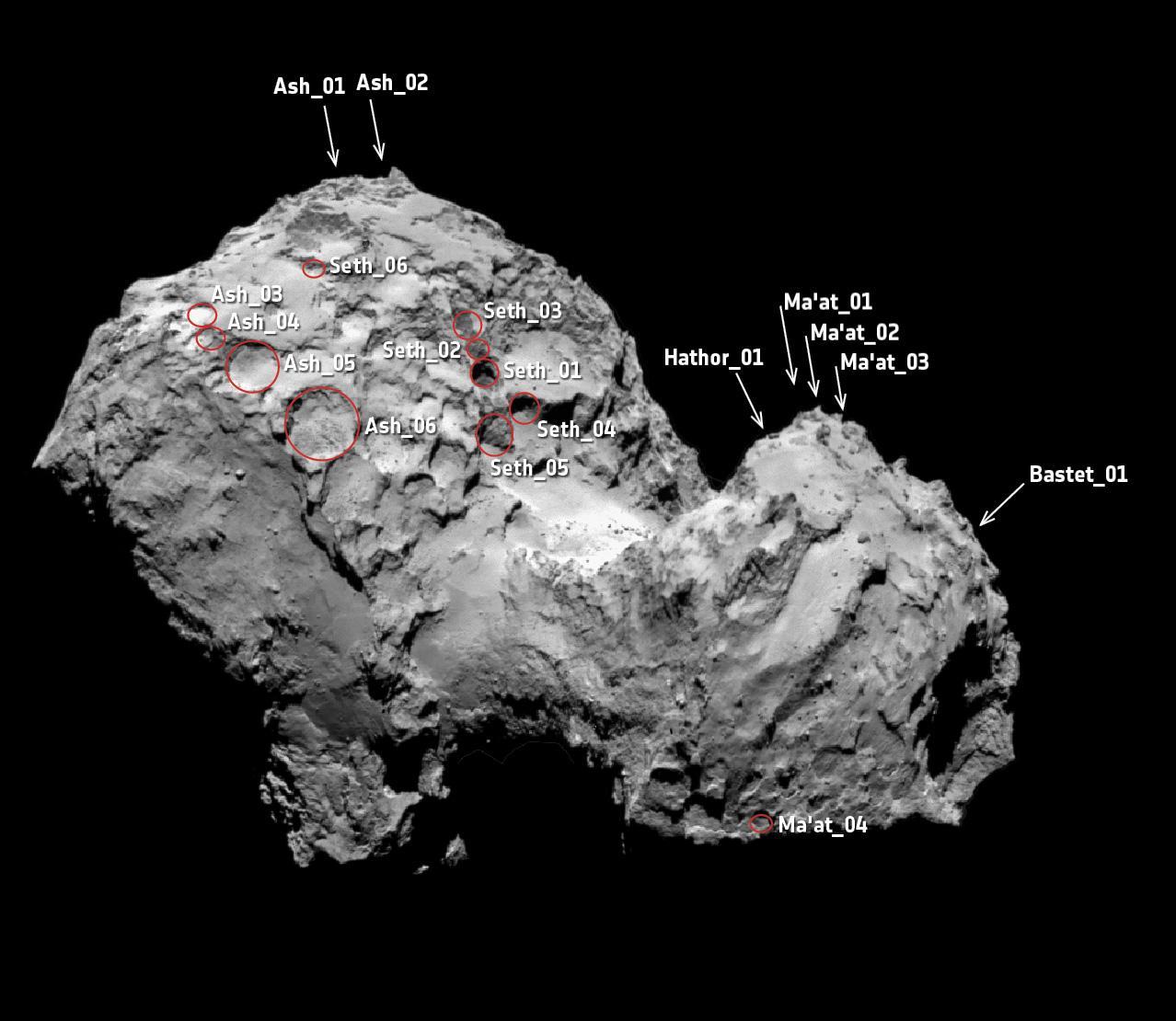 Manuela Braun, of DLR (German Aerospace Center), suggested that “We expected a comet’s surface as soft and fluffy – but learned that it could be very heterogenous. The place where Philae finally came to rest has a very hard surface.”

Even the toughest of planetary bodies are no match for a bit of the ol’ mega-hot plasma heat pulling at its innards.

“We see jets arising from the fractured areas of the walls inside the pits,” said JB Vincent from the Max Planck Institute for Solar System Research.

“These fractures mean that volatiles trapped under the surface can be warmed more easily and subsequently escape into space.”

3. Oxygen remnants can survive billions of years in space

Observations made by Philae turned up “pristine” traces of oxygen that’d been at rest for billions of years. That’s one old rock. That’s was a surprising find for those that believed our universe to have formed in a series of chemical and physical reactions rather rapidly.

According to the study published on this finding, “Abundant molecular oxygen in the coma of comet 67P/Churyumov–Gerasimenko”, which can be found at Nature under code doi:10.1038/nature15707 :

“Our observations indicate that the O2/H2O ratio is isotropic in the coma and does not change systematically with heliocentric distance. This suggests that primordial O2 was incorporated into the nucleus during the comet’s formation, which is unexpected given the low upper limits from remote sensing observations4. Current Solar System formation models do not predict conditions that would allow this to occur.” – A. Bieler et. all

Instead, oxygen having lasted for billions of years suggested that the process with which life was created on Earth – for example – could have been far more gradual, smooth, and calm than previously suspected.

Are vois, Philae and Rosetta

The mission is over. The instruments listening for telemetry from the lander will remain on for a few more months, but no more commands are being sent. You had a good run, mission – have fun in deep space!