2023 Chevrolet Corvette Z06 revealed: A supercar made for the racetrack

GM has officially revealed the 2023 Chevrolet Corvette Z06 supercar, laying out all the details following its big teaser released last week. The new model, which will enter production next summer, is the byproduct of “intense focus,” according to Chevrolet. The Corvette Z06 is set apart by the new 5.5L LT6 naturally-aspirated V8 engine offering the highest horsepower of its kind, exceeding that of all other production cars on the market.

In August, Chevy announced its plans to fully reveal the Corvette Z06 in late October, a promise it has fulfilled with the nearly hour-long film “Putting The World on Notice” released today. As previously leaked, the Corvette Z06 supercar sports a 5.5L DOHC V8 engine, though it tops out at 8,600rpm rather than the 9,500rpm claimed in leaks. The horsepower, however, exceeds what was anticipated at 670 HP.

The automaker says its engineers spent a full two years designing a “distinctive, rich exhaust tone unlike anything ever heard from a Corvette,” the same tone that kicks off the model’s debut film. The updated Z06 packs “unique” front and rear fascias new to the Z06 name, with the front fascia designed to pipe air to a central heat exchanger for optimized cooling. The Z06 comes in at 3.6-inches wider than the Stingray model, making room for the side air vents and giant 345-series rear tires. 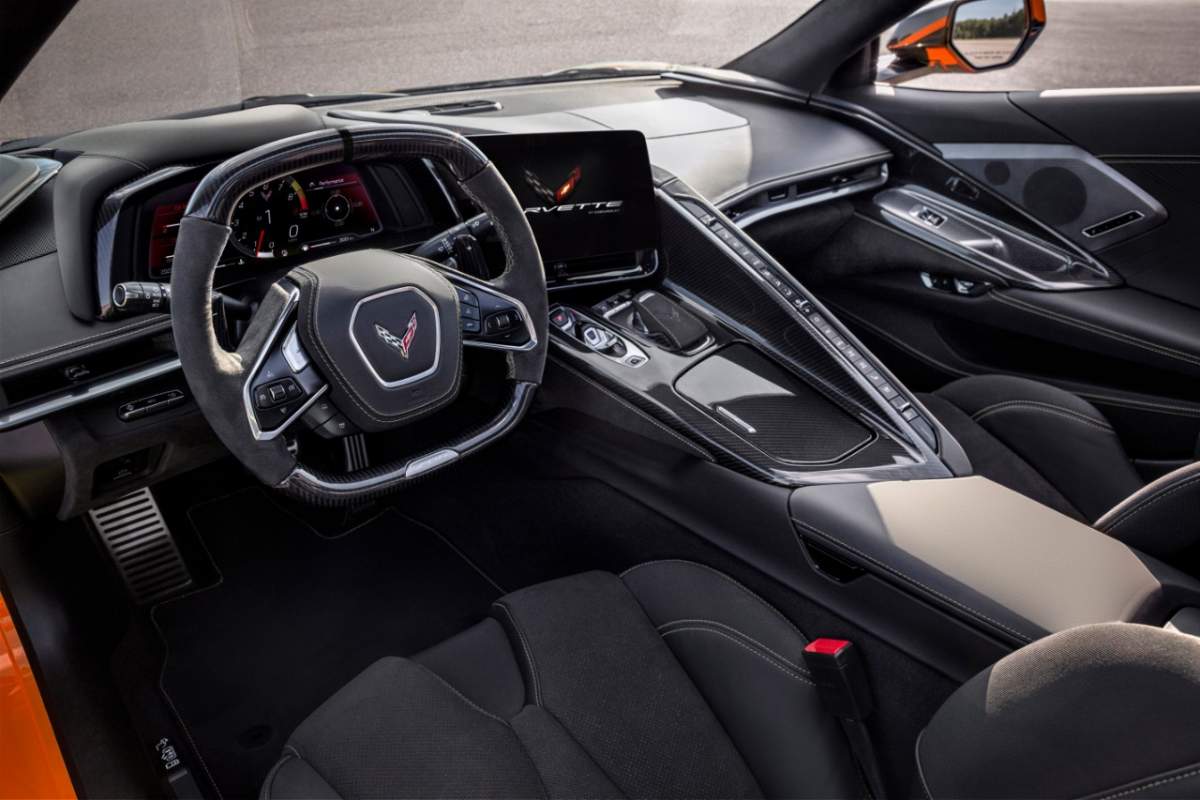 The new wheels should lay to rest the controversy surrounding the standard rims currently offered on the Corvette, boosting the Z06’s overall aggressive design with 20-inch front and 21-rear “spider” forged aluminum wheels. Chevy says customers will have five wheel finishes to choose from, underscoring its mission to let customers personalize the supercar to their own tastes.

Corvette has always brought a discerning customer to the Chevy family. This new Z06 was designed and engineered to set a higher bar with increased levels of craftsmanship, personalization and performance so customers can truly have their own bespoke performance car.

Among the Z06’s (many) notable features is a standard reconfigurable rear spoiler designed with adjustable wickerbill elements for buyers who want to hit the track, as well a carbon fiber wheel option for those who want to shed 41lbs from the model’s weight.

The Z06’s braking trumps the Stingray with larger six-piston front brakes and enhanced acceleration made possible by the eight-speed dual-clutch transmission’s shorter 5.56 final drive ratio. When it comes to hitting the track, Chevy says it’ll offer a performance package that brings 734lbs of downforce at 186 MPH, blowing away previous Corvette models.

Enthusiasts who want to dig into the details can find more information about the Corvette Z06 and its new engine on Chevrolet’s website. The 2023 Corvette Z06 supercar will enter production in summer 2022.