2021 Volkswagen Tiguan brushes up bestseller with new style and tech

Refreshing your most popular model is as much a risk as it is an opportunity in the car world, but it’s the challenge Volkswagen faces with the 2021 Tiguan. The automaker sold 109, 572 Tiguans alone in the US in 2019, with the American driver’s desire for larger crossovers and SUVs making the midsize SUV VW’s bread-and-butter. Further afield, it’s the top-selling SUV in Europe: when it comes to refreshing it, VW needs to get things pitch-perfect.

“The Tiguan is our bestselling Volkswagen and is an extremely important model in our lineup,” Hein Schafer, Senior Vice President, Product Marketing & Strategy, Volkswagen of America explains. “The compact SUV segment continues to grow, and the Tiguan has really helped us double our share in the segment.” 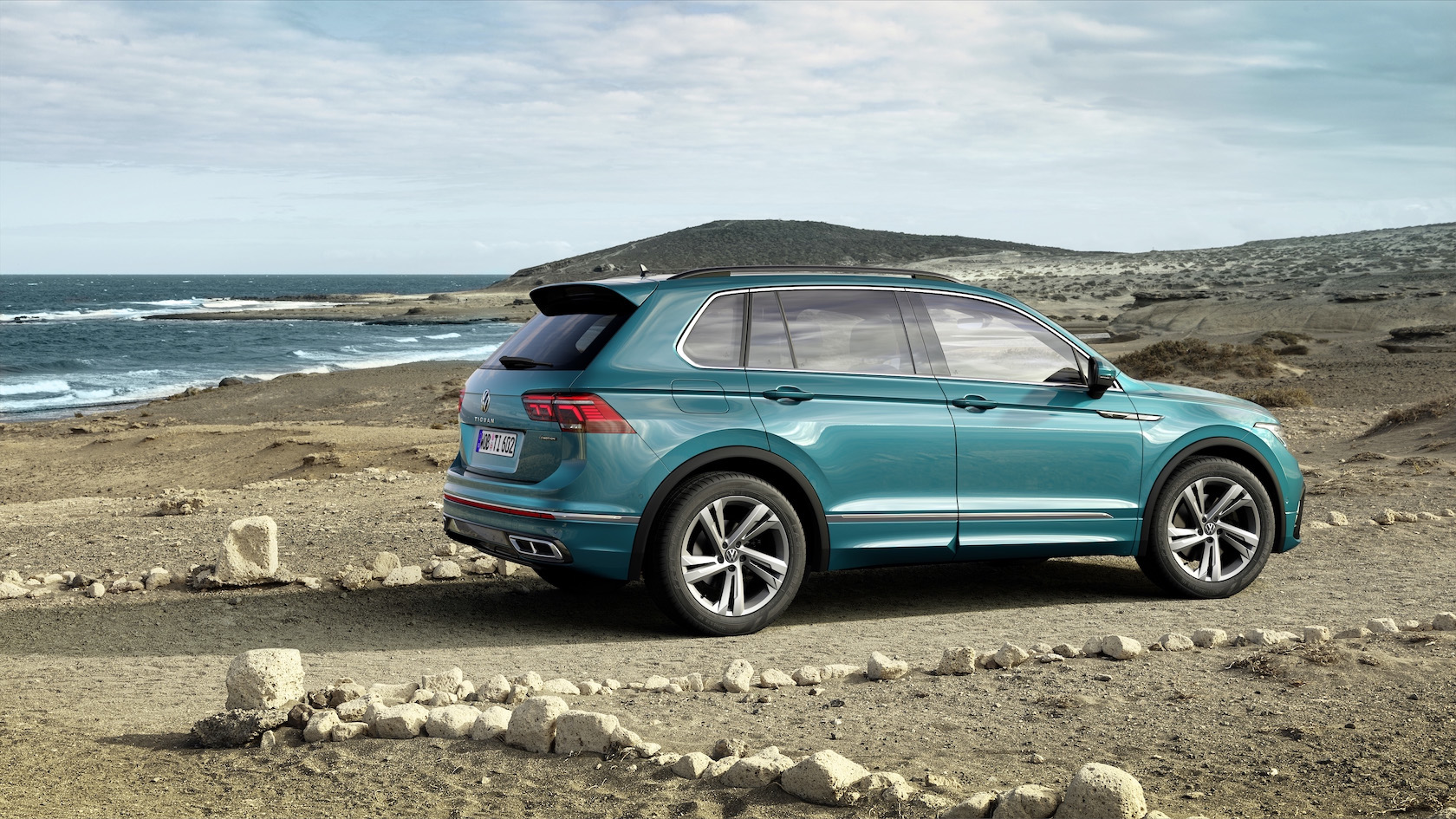 You can think of today’s reveal as a very early taster, if you’re in the US. As you may have guessed, there’s a new Tiguan arriving soon-ish for Europe, but it’s going to be a long wait for us here stateside. According to Volkswagen, its latest Tiguan SUV – in standard wheelbase form – arrives in Europe by early July this year.

North America, though, won’t see cars arrive until October next year, as model year 2022. Nevertheless, I’m expecting the updated Tiguan to surpass expectations despite the number of compelling choices like the Toyota RAV4, Honda CR-V, and Mazda CX-5, to name just a few worthy competitors.

The Tiguan’s rebirth began when VW unveiled the long-wheelbase version in 2018, and it’s that form-factor alone which will be coming to the US. Based on the same platform as the three-row Atlas SUV and Golf hatchback, the LWB Tiguan is a full 10-inches longer than the SWB version. Therefore, this sets the Tiguan apart as being able to squeeze in the third row of seats. 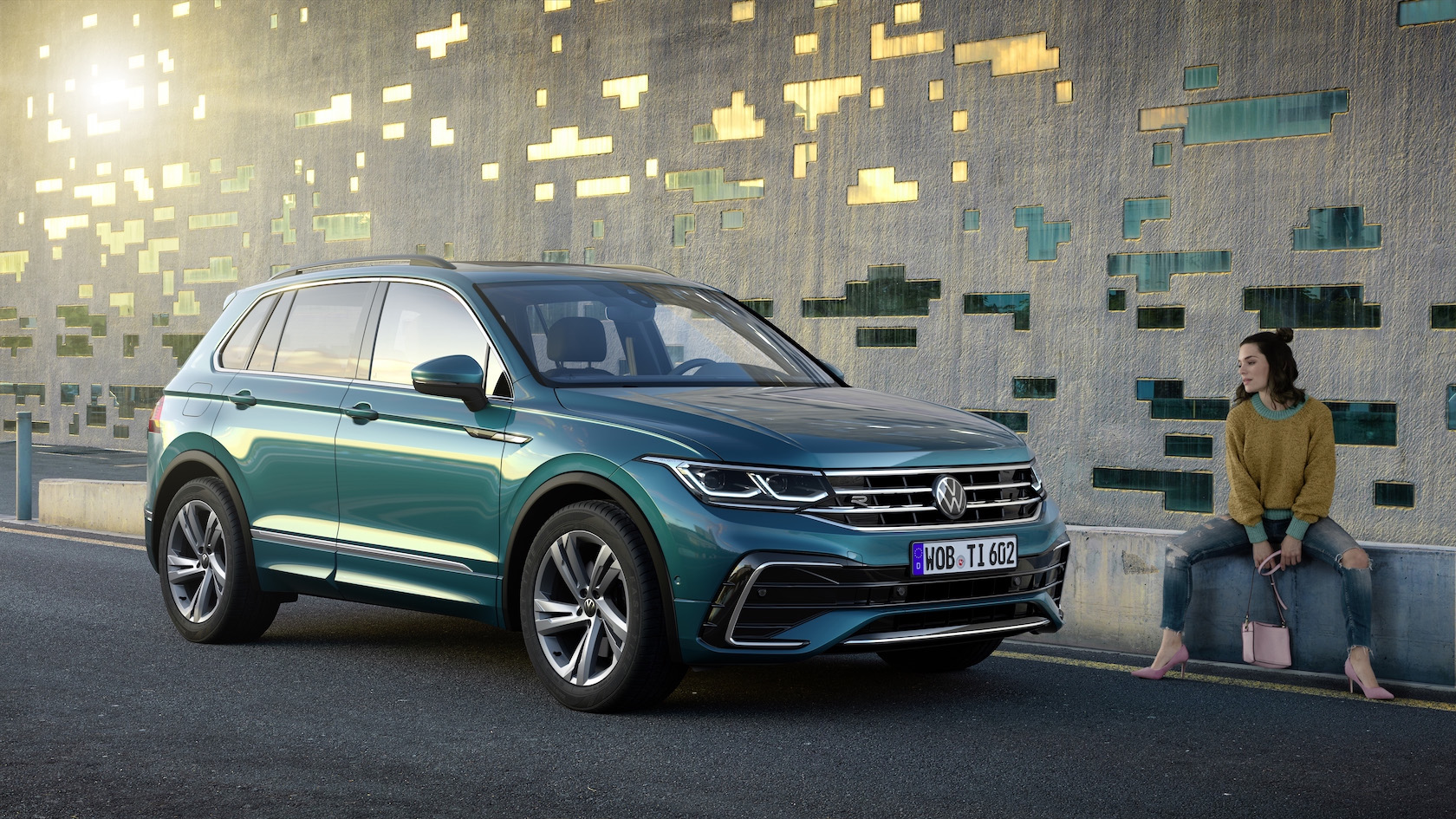 Admittedly, the third-row is only suitable for children or vertically-challenged adults, a restriction VW execs are quick to concede. Nonetheless the Tiguan LWB effectively helped the automaker to double its market share from 2016 to 2019. 45-percent of current Tiguan sales are front-wheel drive, and so get the third-row seating as standard; 23-percent of those who buy the current AWD Tiguan opt to add the third-row in.

In keeping with Volkswagen’s other recent launches, the 2021 Tiguan blends a mixture of solid styling with sportier elements. The front is completely redesigned with new LED headlights – standard across all trims – plus a chunkier front bumper with C-shaped lower air intakes, and a larger grille. New wheels, spanning 17- to 20-inches, have been added to the catalog. 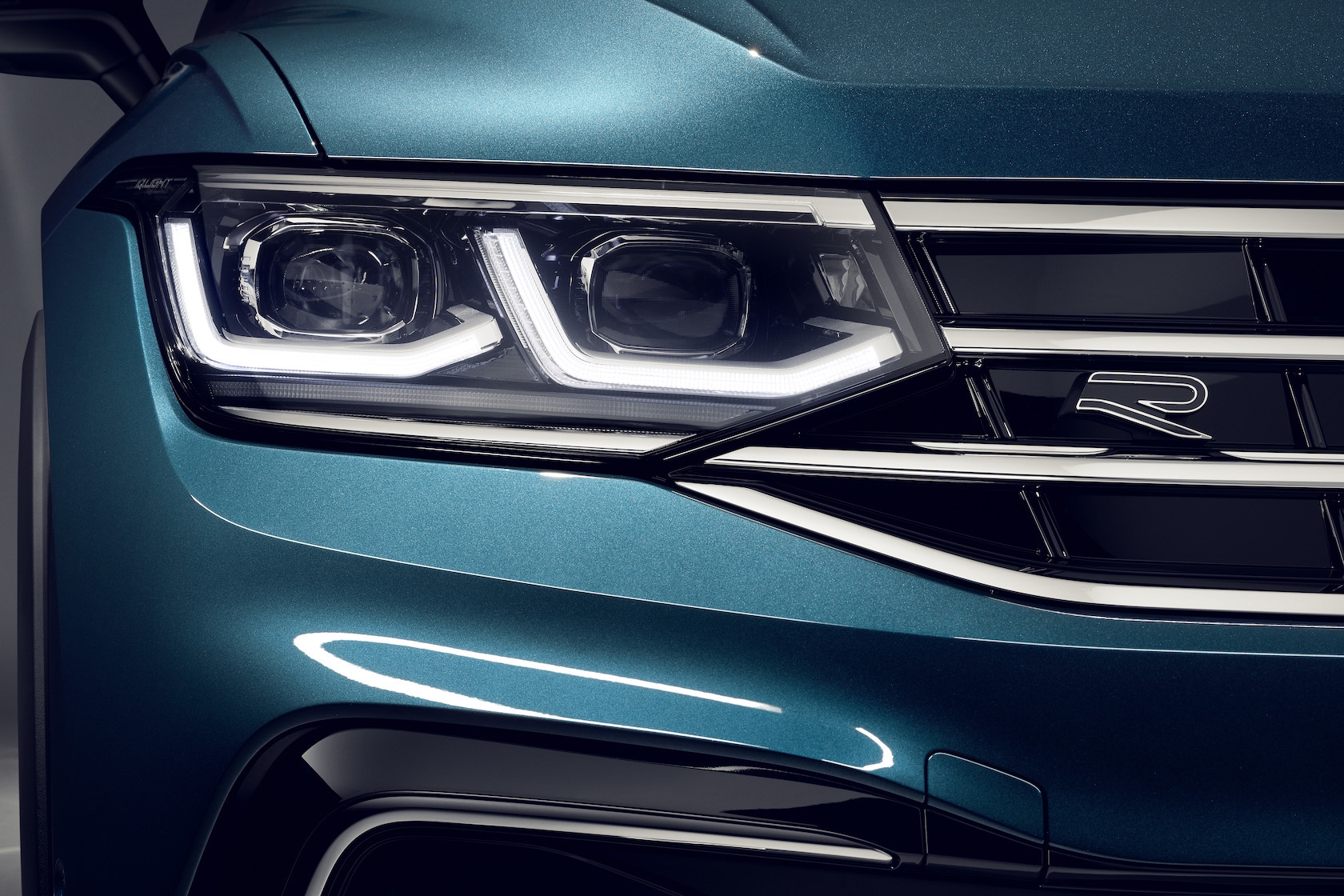 Clearly the Tiguan has inherited some styling DNA from the new Atlas Cross Sport, and that’s only a good thing. At the rear, there’s a new set of LED taillights, plus easy open & close tailgate. A new bumper plus “TIGUAN” lettering now positioned centrally under the VW logo help distinguish it from the outgoing SUV. 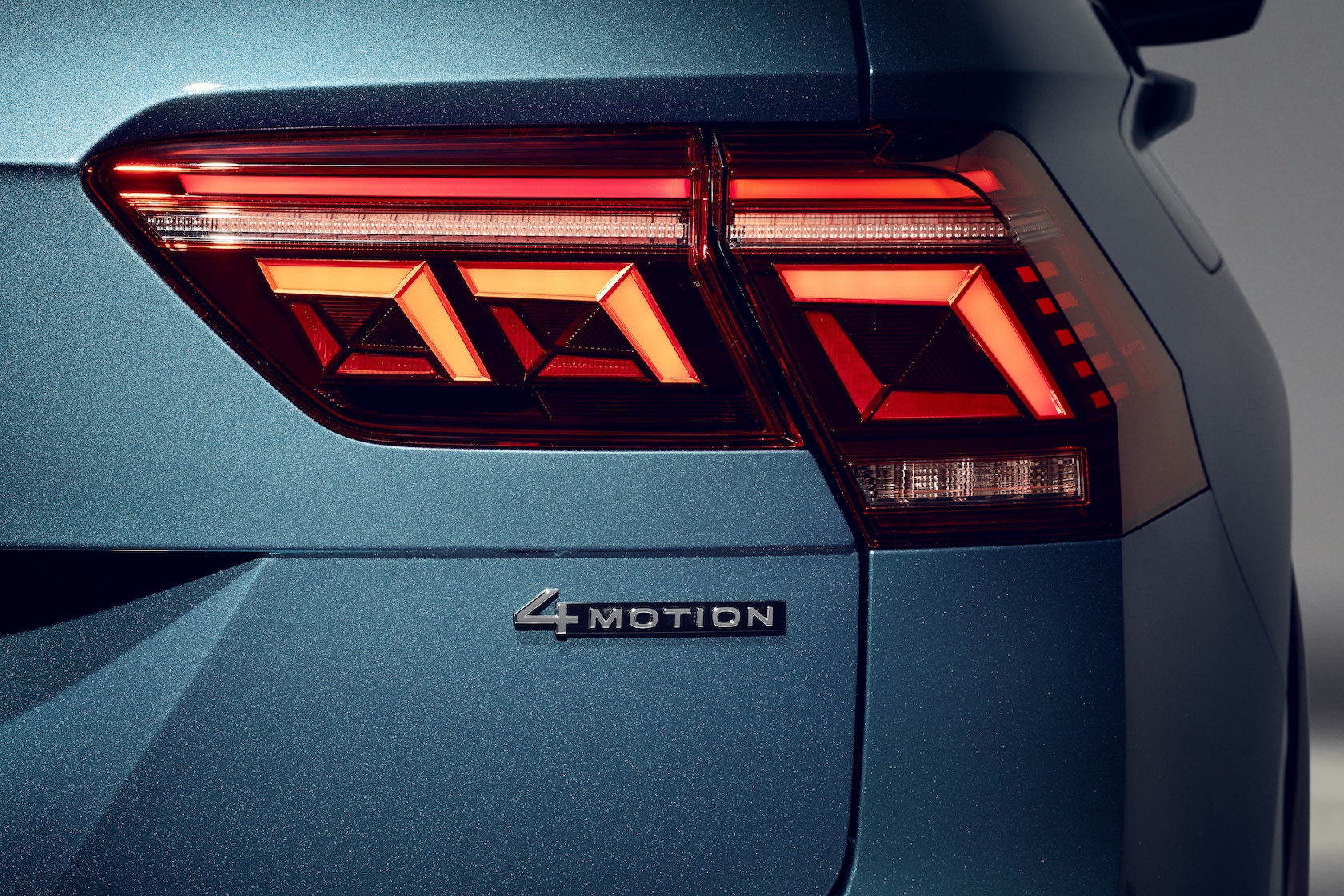 The interior, meanwhile, receives some important updates to keep it fresh among the competitors, including a standard 8-inch digital cockpit display; a larger, 10-inch display is available. The infotainment system uses VW’s latest generation of MIB3, on either a 6.5-inch or 8-inch touchscreen. VW is sensibly keeping volume and station tuning knobs, while a new Climatronic Touch Interface for the HVAC optionally replaces the physical controls with touch-sensitive versions supporting haptic feedback.

Other features include 15-color ambient lighting, new decors for every trim, and a new steering wheel with illuminated touch islands and slider controls. There’s Wireless App-Connect too, plus a 480W Fender audio system on the options list. 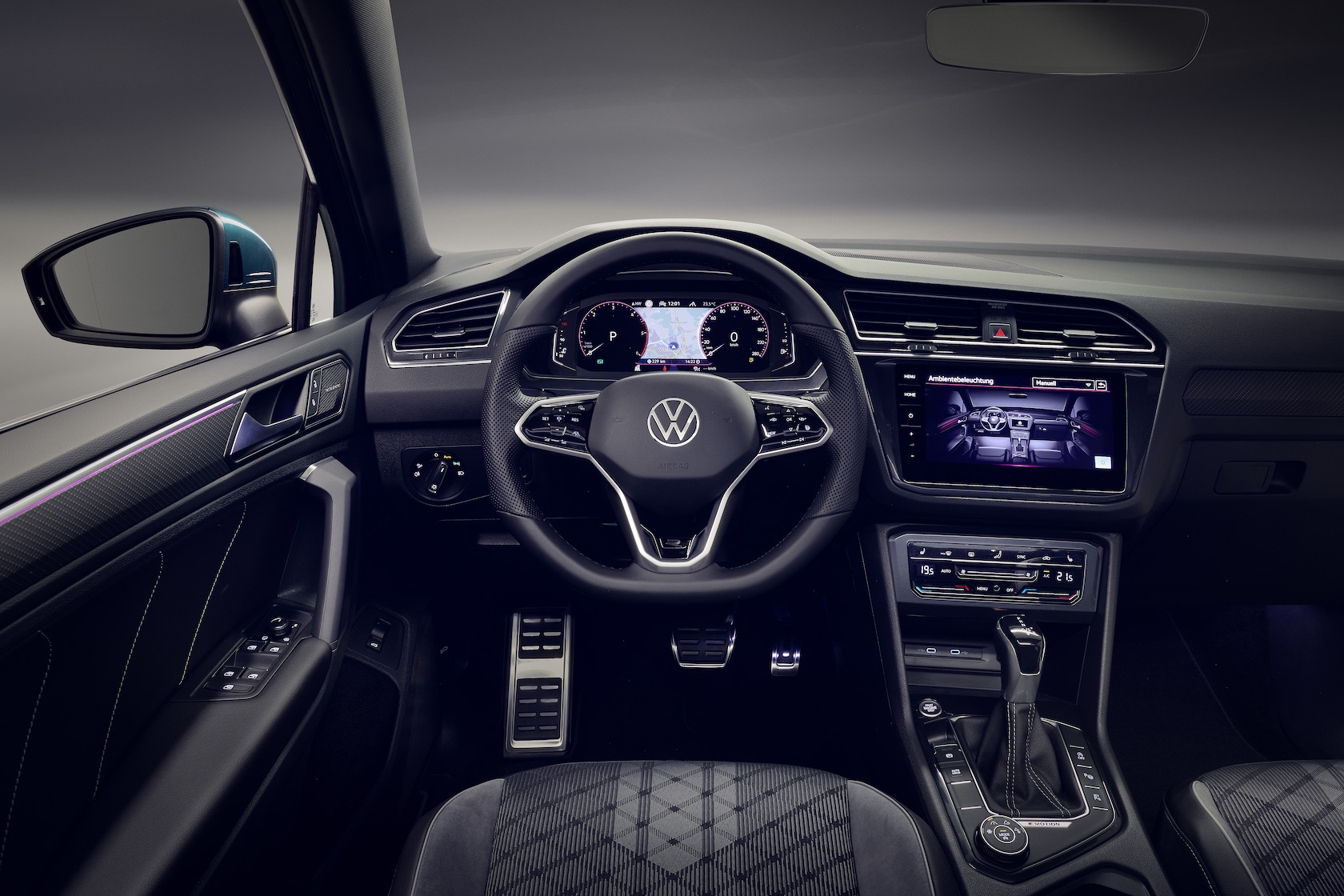 The 2021 VW Tiguan will come in four trim levels at launch. The base Tiguan S will get 17-inch alloy wheels, heated front seats, and standard LED headlights and taillights. It also has cloth seat surfaces.

I suspect that the more popular trim will be the Tiguan SE, though. That adds in 18-inch alloys, a power tailgate, the touch-operated climate control system, panoramic sunroof, and comprehensive safety features including adaptive cruise control, emergency assist, and lane assist. It also gets the 8-inch central MIB3 touchscreen, plus leatherette seat surfaces with a new “Cinnamon” color option. 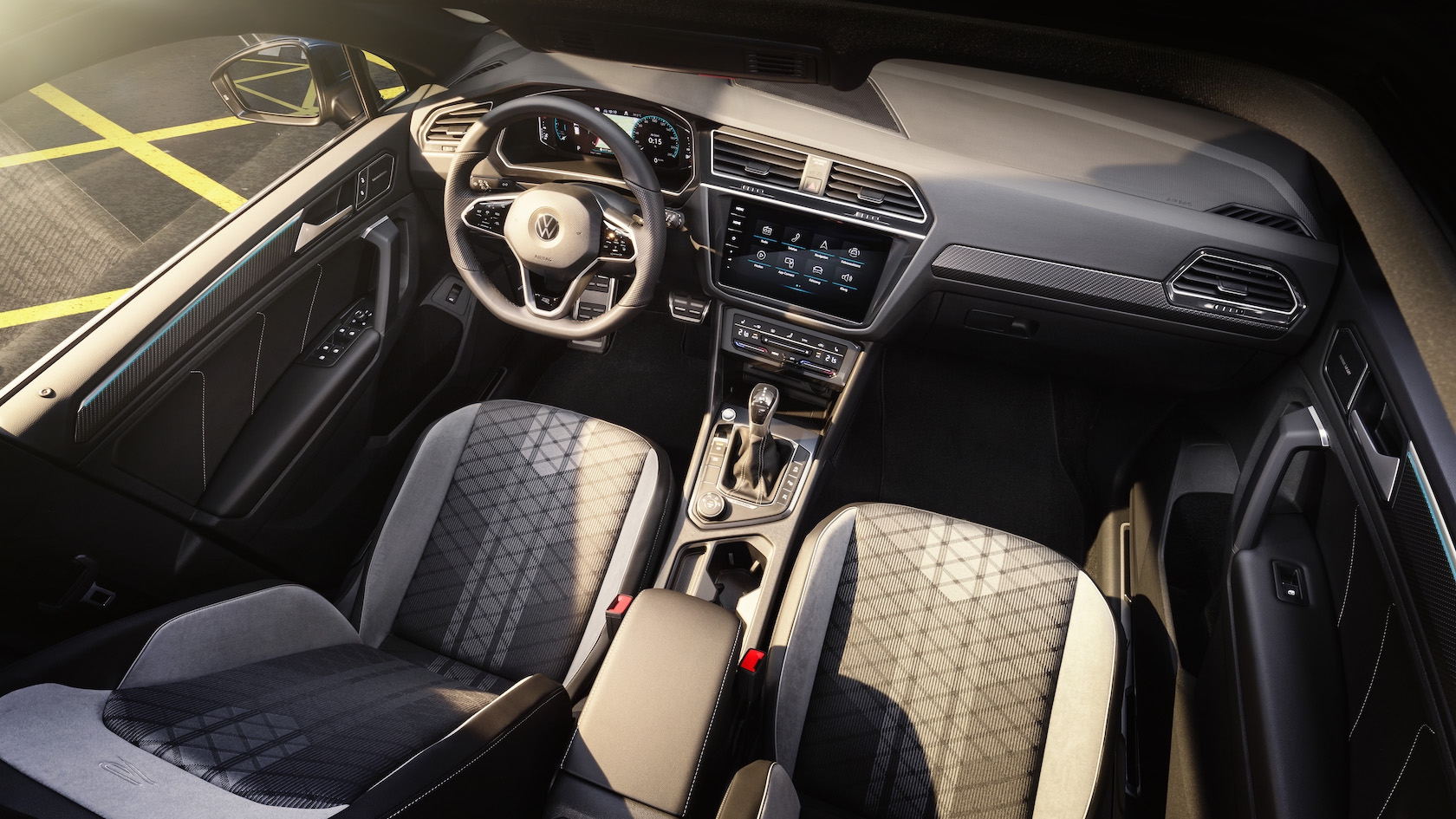 As standard you get front-wheel-drive and, from the Tiguan SE up, three rows of seats. AWD models come standard with two rows of seating, with the third-row remaining optional. 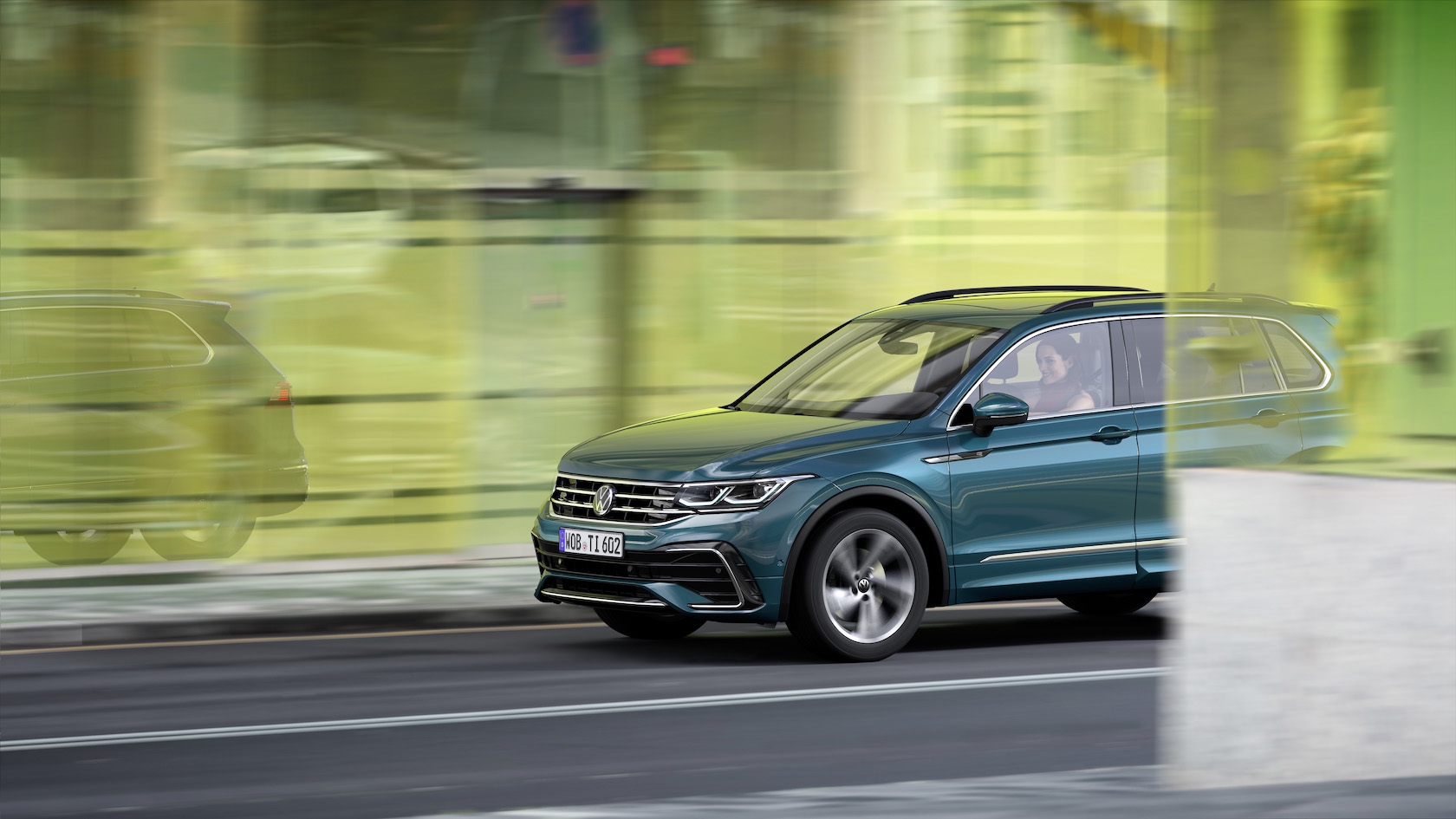 Regardless of trim, all 2021 Tiguan come with a 2.0-liter turbocharged four-cylinder TSI engine, good for 184 horsepower and 221 pound-feet of torque. It’s mated to an 8-speed automatic transmission with selectable driving modes. VW’s 4Motion AWD system requires checking off the options box.

There’s no more power compared to the 2020 Tiguan, but VW says it has tweaked the software. That should lead to some improvements in drivability, the automaker promises, particularly around the transmission feel and engine responsiveness. 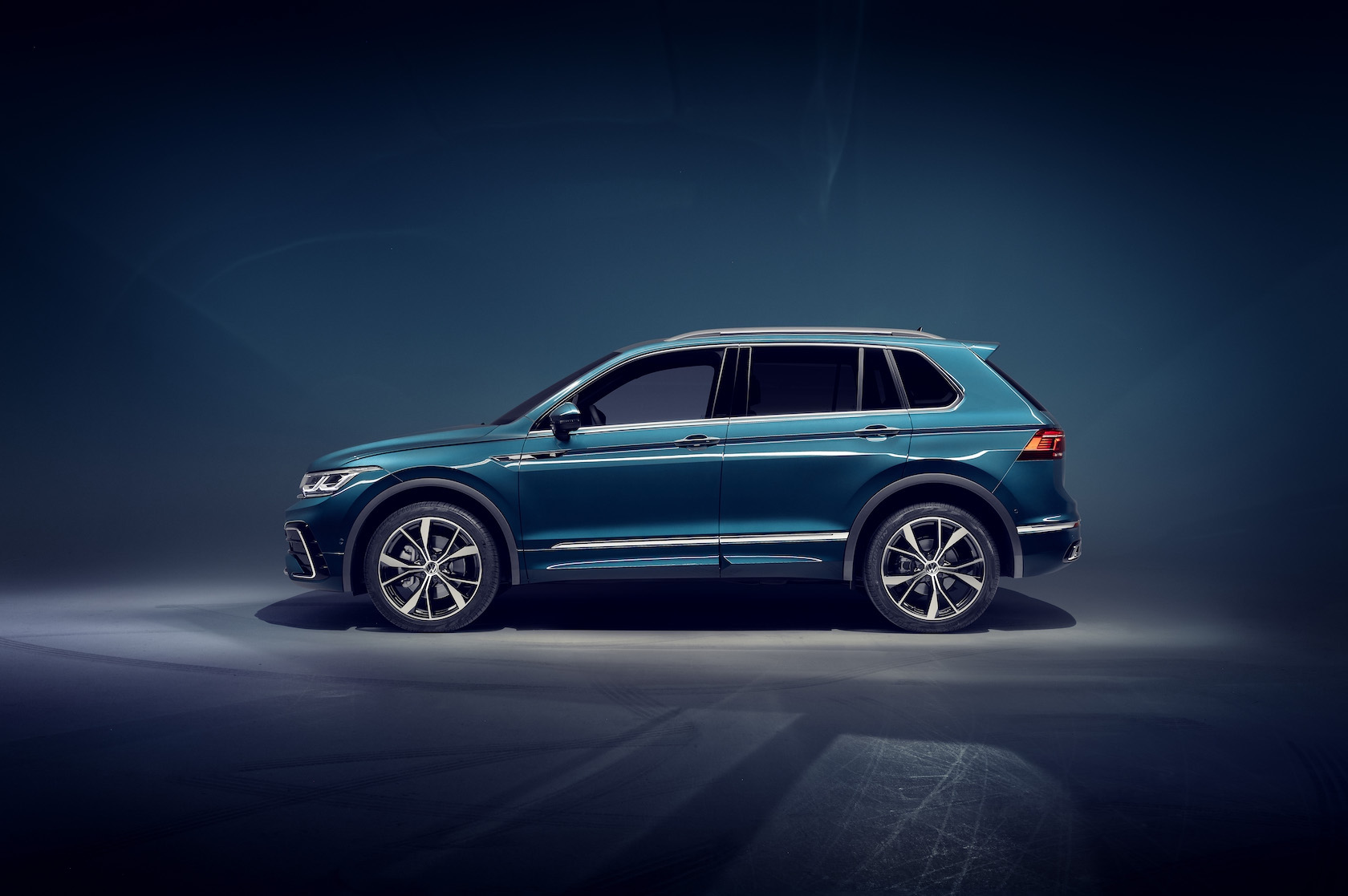 The 2021 VW Tiguan is expected to remain a bestseller, but the competition is not resting on its laurels. Notably, while the Honda CR-V and Toyota RAV4 are forging the path of mild electrification, Volkswagen has no plans to sell a hybrid or plug-in hybrid version of the new Tiguan in North America. I feel that’s a missed opportunity, though VW execs suggest it may have to wait until the Tiguan’s successor. Also absent is a Tiguan R for the US: the European model will only be offered in short wheelbase form.

What American drivers will get is an even smaller compact SUV, which will slot in below the Tiguan. Is it the T-Cross subcompact SUV? Volkswagen wouldn’t say, but we only have to wait until the end of 2020 to find out.