The second-generation 2021 Rolls-Royce Ghost marks the beginning of a new era at Goodwood. Here is a modern Rolls, one that sets aside pompousness for what the marque refers to as ‘Post Opulence’ design. The first-generation Ghost, released in 2009, became the most successful product in Rolls-Royce’s 116-year history. And, unlike with the stately Phantom, it turns out Ghost buyers prefer driving the car themselves rather than being driven.

Shifting the owner from the back seat to the front requires a big change in ethos for a company that made its name as the pinnacle of limousines. Indeed, the Ghost embraces an entirely new philosophy, wherein minimalism and driving pleasure take center stage. If you know anything about a Rolls-Royce, it’s the fact that minimalism is nothing but a ten-letter word; this all changes in the next-gen Ghost. 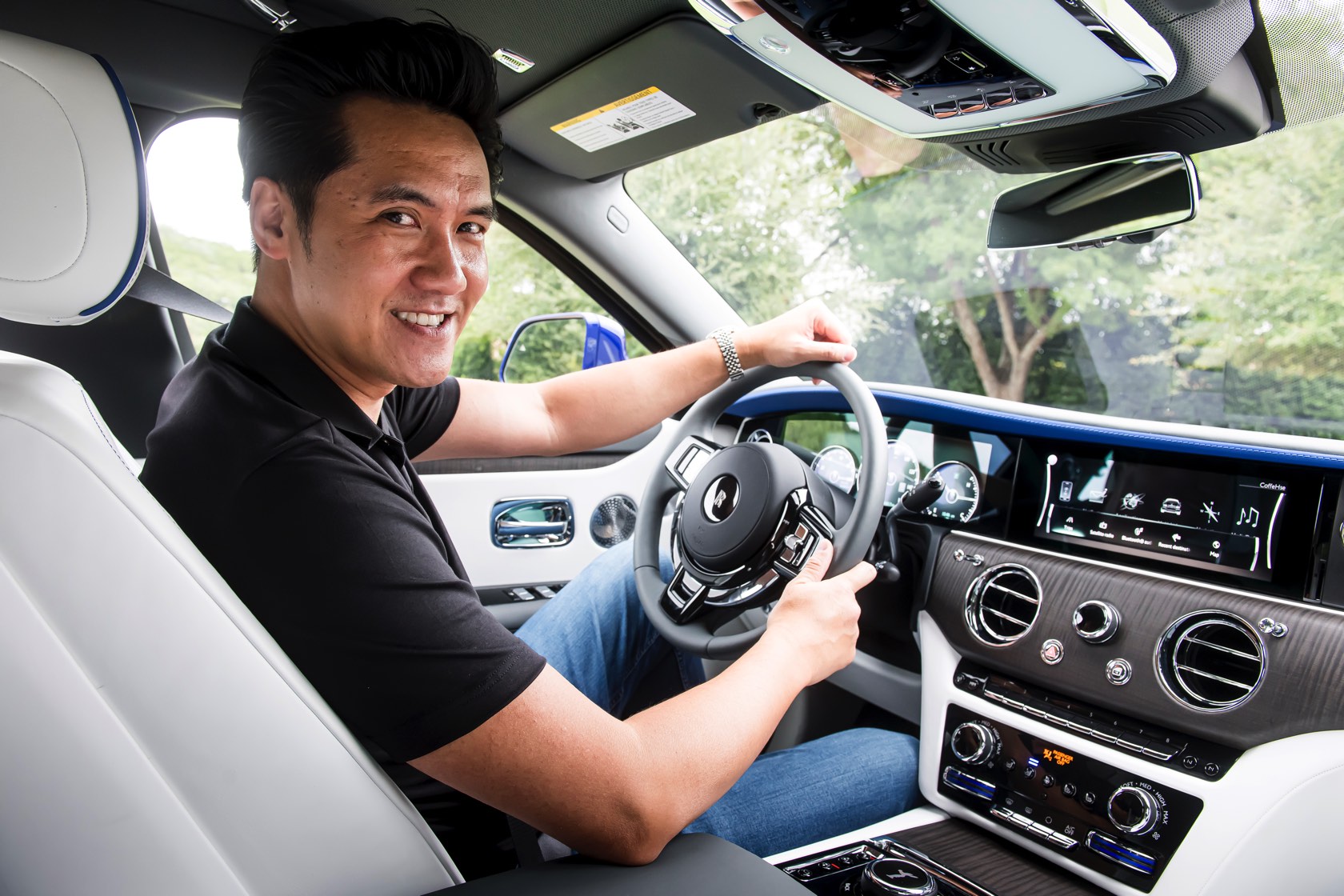 “To create a new product that would resonate with our Ghost clients for the next ten years meant we had to listen carefully to their demands,” Torsten Müller-Ötvös, Chief Executive Officer, Rolls-Royce Motor Cars, explained. “They require a new type of super-luxury saloon that is dynamic, serenely comfortable, and perfect in its minimalism.” 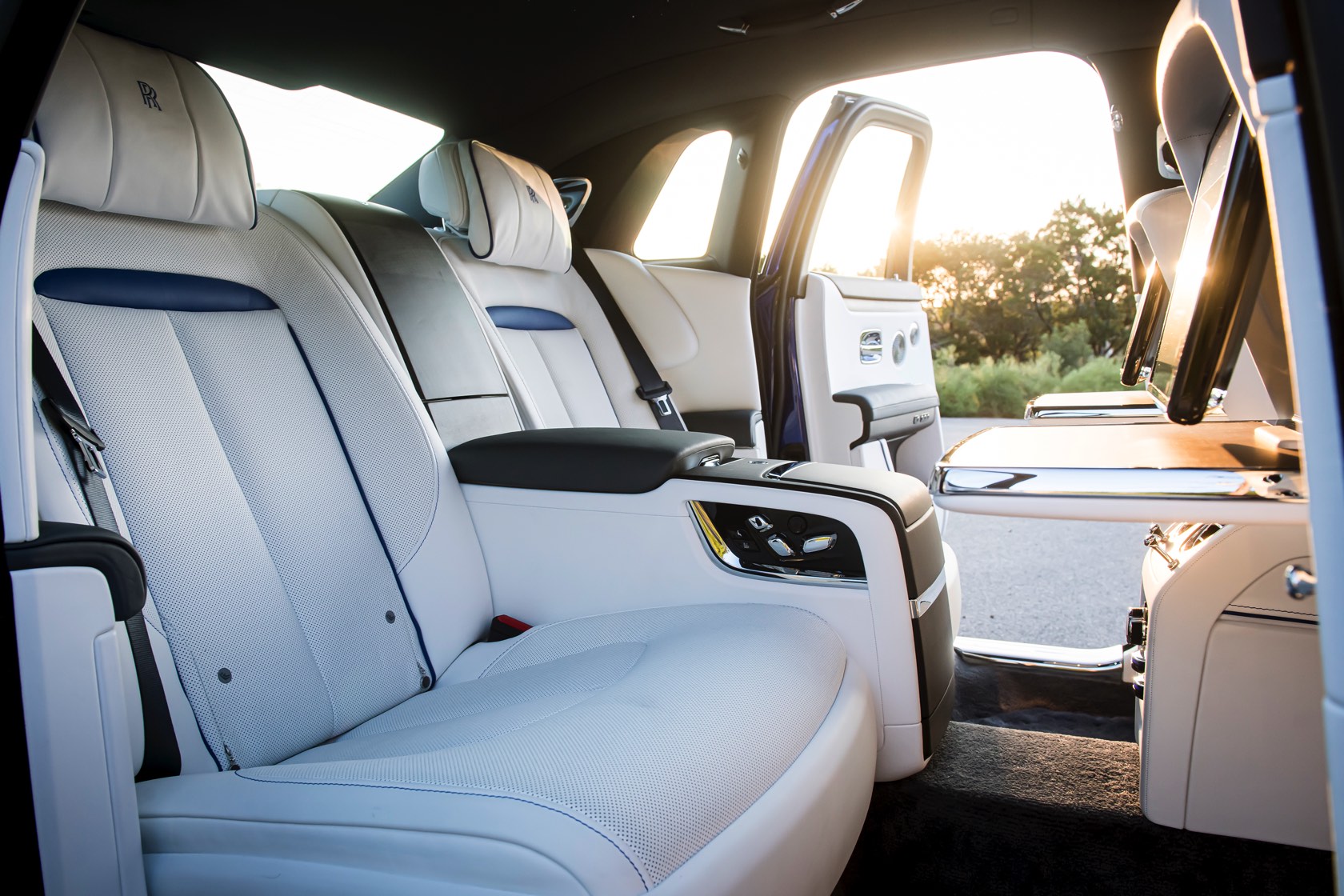 Rolls-Royce started from very nearly from scratch in creating the new Ghost, with a lengthy list of what a new generation of wealthy clientele would be looking for in its next motor car. “The only components that we carried over from the first Goodwood Ghost were the Spirit of Ecstasy and umbrellas,” Müller-Ötvös says. “Everything else was designed, crafted, and engineered from the ground up.”

It begins with the new Ghost’s proprietary aluminum spaceframe architecture, the same core platform that also underpins the Phantom and the Cullinan SUV. For the Ghost, though, the engineers positioned the sill panels, cross-members, floor, and aluminum bulkhead differently, to hit the right balance of sportiness and luxury. The suspension mounting points were pushed to the front of the vehicle, while its gargantuan 6.75-liter V12 engine is cleverly relocated behind the front axle to deliver a 50/50 weight distribution. 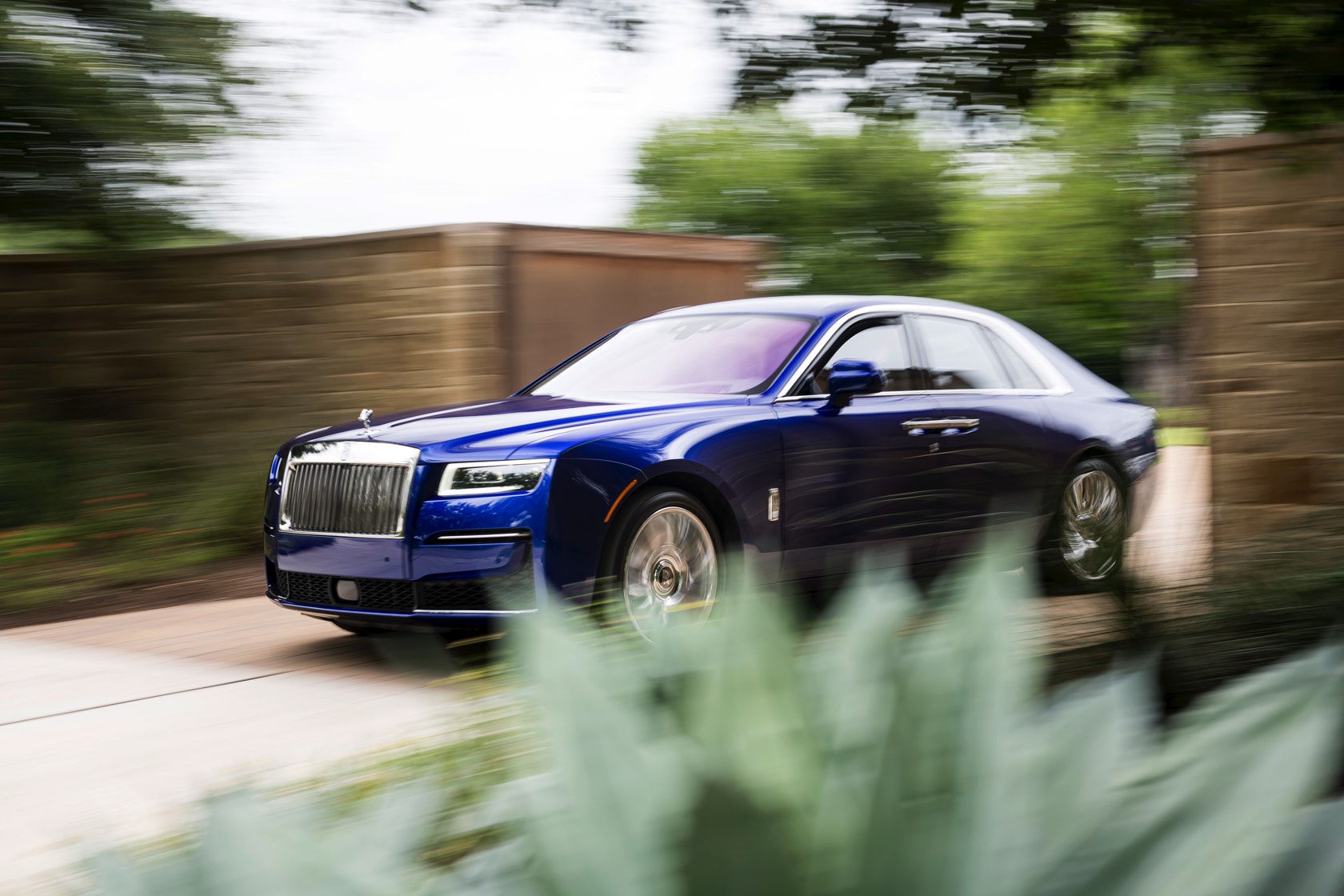 It all sounds like the recipe for creating a sporty sedan, and that’s what Rolls-Royce is aiming for in the new Ghost. An uber-luxurious sports sedan that rides like a dream, and indeed it does.

Stepping inside the new Ghost is like arriving at a five-star hotel suite, but driving it is an entirely different experience. 3.5-inches longer, 1.0-inch taller, and at least 1.18-inches wider than the old model, there’s no denying you’re piloting a sizable car from behind the wheel. Rolls-Royce manages to disguise much of that bulk and heft with the judicious application of old-school engineering and brand new technology. 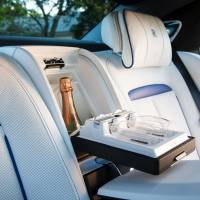 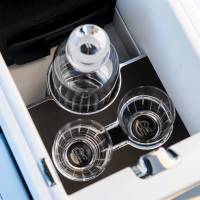 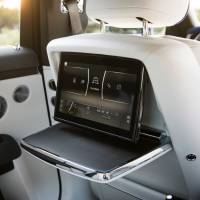 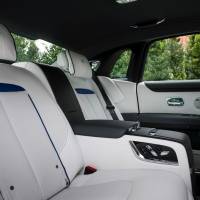 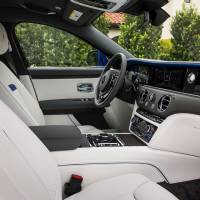 The growth spurt is required to make room for a new all-wheel-drive drivetrain, standard all-wheel steering, and an innovative Planar Suspension System. The latter is an automotive industry first, and developed in-house. It consists of an upper wishbone damper above the front suspension assembly, which helps the Ghost be proactive at predicting what lies below and ahead, rather than reactive like most adaptive suspension systems are today.

Rolls-Royce added a small shock absorber between the primary front dampers and the car, for maximum compliance. Working alongside the Ghost’s Flagbearer system – that uses cameras to read the road surface and compensate as necessary – it achieves the famed ‘magic carpet ride’ that only a Rolls-Royce can deliver. 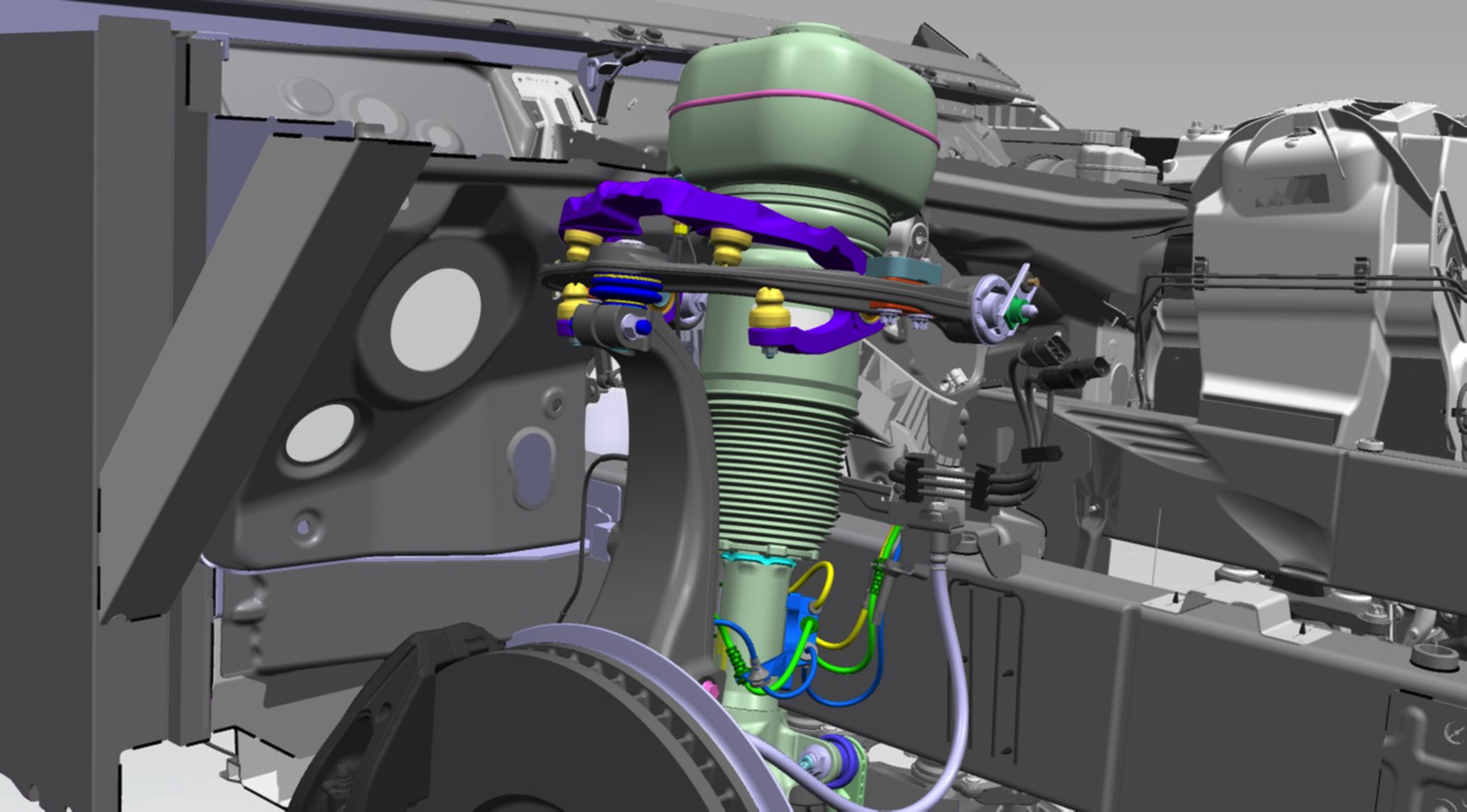 This time, however, there’s a sense of tautness that blends into the well-dampened driving environment. The smooth and cosseting ride is also attributed to the Satellite Aided Transmission that utilizes GPS data to anticipate the vehicle’s every move, and the Ghost’s electronically-controlled shock absorbers and self-leveling high-volume air strut assemblies. To make it as quiet as it is smooth, Rolls-Royce infused around 200 pounds of acoustic damping materials throughout, to help eliminate road and wind noise.

Lashings of insulation isn’t unusual in the luxury car space, but the sort of obsessive focus on detail Rolls-Royce shows is. The engineers went as far as painstakingly-redesigning the air conditioning ducts while tuning each interior component to resonate a common frequency once the car is in motion. Helping the cause are exit ports underneath the rear parcel shelf, that allow sound waves to escape instead of resonating inside the new Ghost’s 507-liter trunk. The result is a mesmerizing feeling of being transported in a pocket of near-silence, serenely isolated from the world outside. 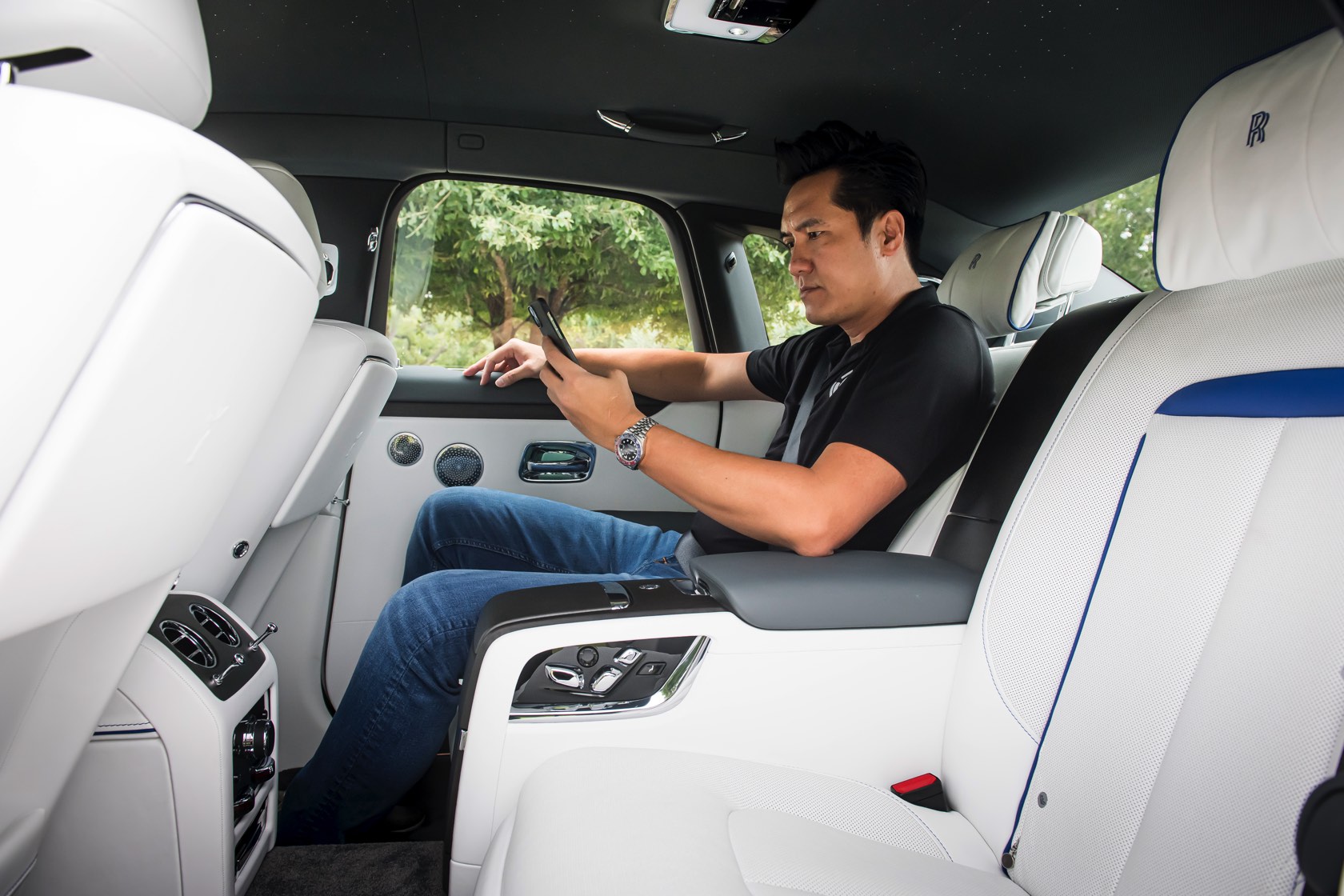 It also happens that the new Ghost is the most technologically advanced Rolls-Royce ever made; all that clever suspension and chassis tuning are just the start. Indeed the Ghost is home to a bewildering array of tech, even if the cabin design would ostensibly dispel the notion of blazing modernity. LED and laser headlights with more than 600m of illuminated range are standard, and there’s a four-camera system with panoramic view and a helicopter view, a considerable heads-up display, self-parking, and a host of driving aids including active cruise control, collision warning, lane departure warning with lane assist, cross-traffic warning, and an alertness assistant just in case the cosseting became too much for you. 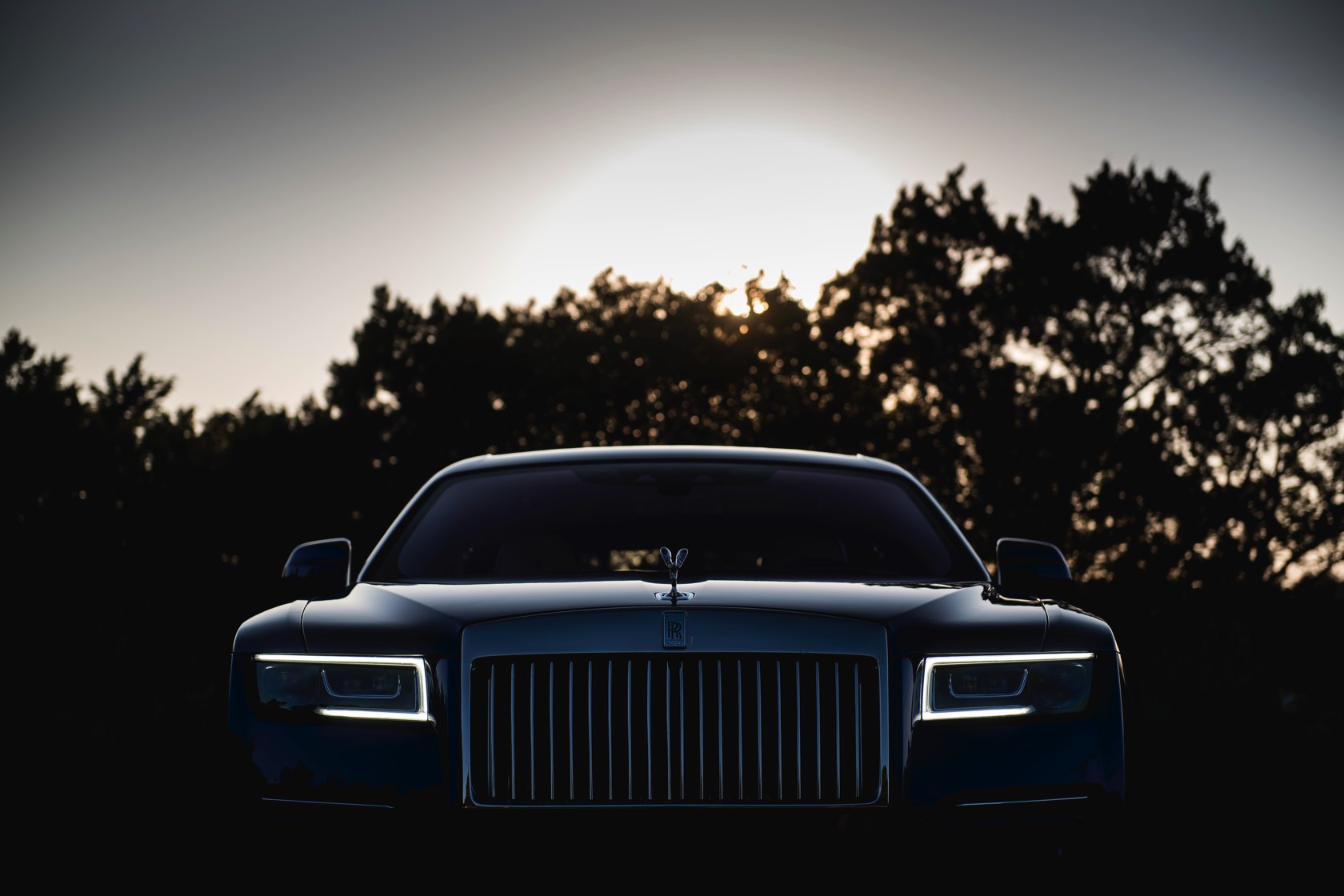 On the luxury side, the new Ghost ticks all the checkboxes and then invents some of its own. It still has self-opening/closing doors, a micro-environment air purification system, and a material-rich yet straightforward cabin. The ‘Post Opulence’ philosophy aims to reject busy and superfluous embellishments in favor of rich and elegant materials. Every conceivable surface inside the Ghost is covered in the finest leather and open-pore wood veneers, while the buttons, stalks, and controls are crafted from high-grade metal. There are standard finishes for the $332,500 starting price, but as always the sky is the limit and the level of customization only really depends on the imagination of each individual buyer. 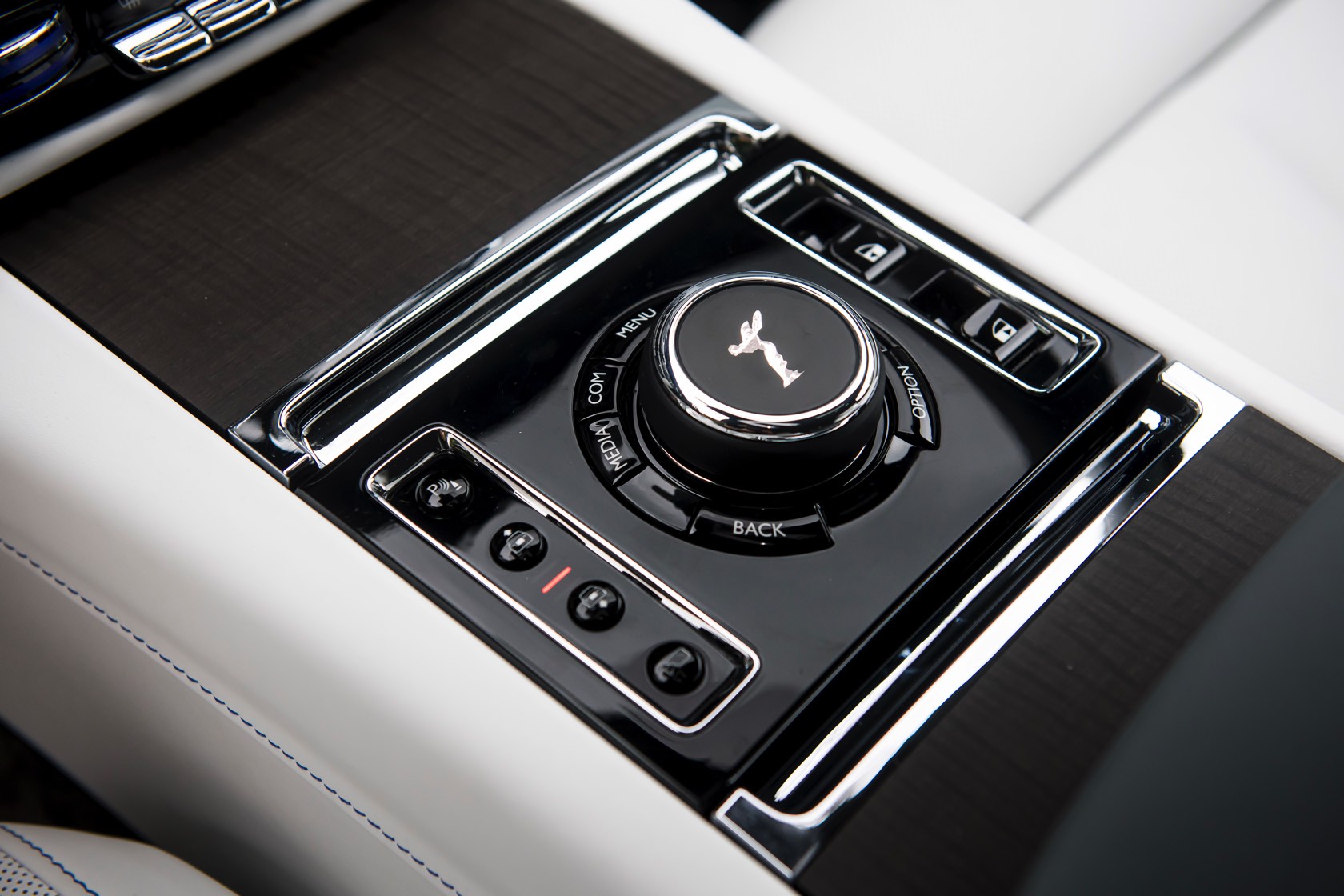 Few vehicles blur the line between object and sculpture like a Rolls-Royce does. The lever to adjust the side mirrors, for example, is a perfect stalk of machined, polished metal located neatly beside the window controls. It operates with the heft and tactility one expects from a six-figure luxury car. Even the chunky metal knobs to operate the climate control are decorated with fine leather. 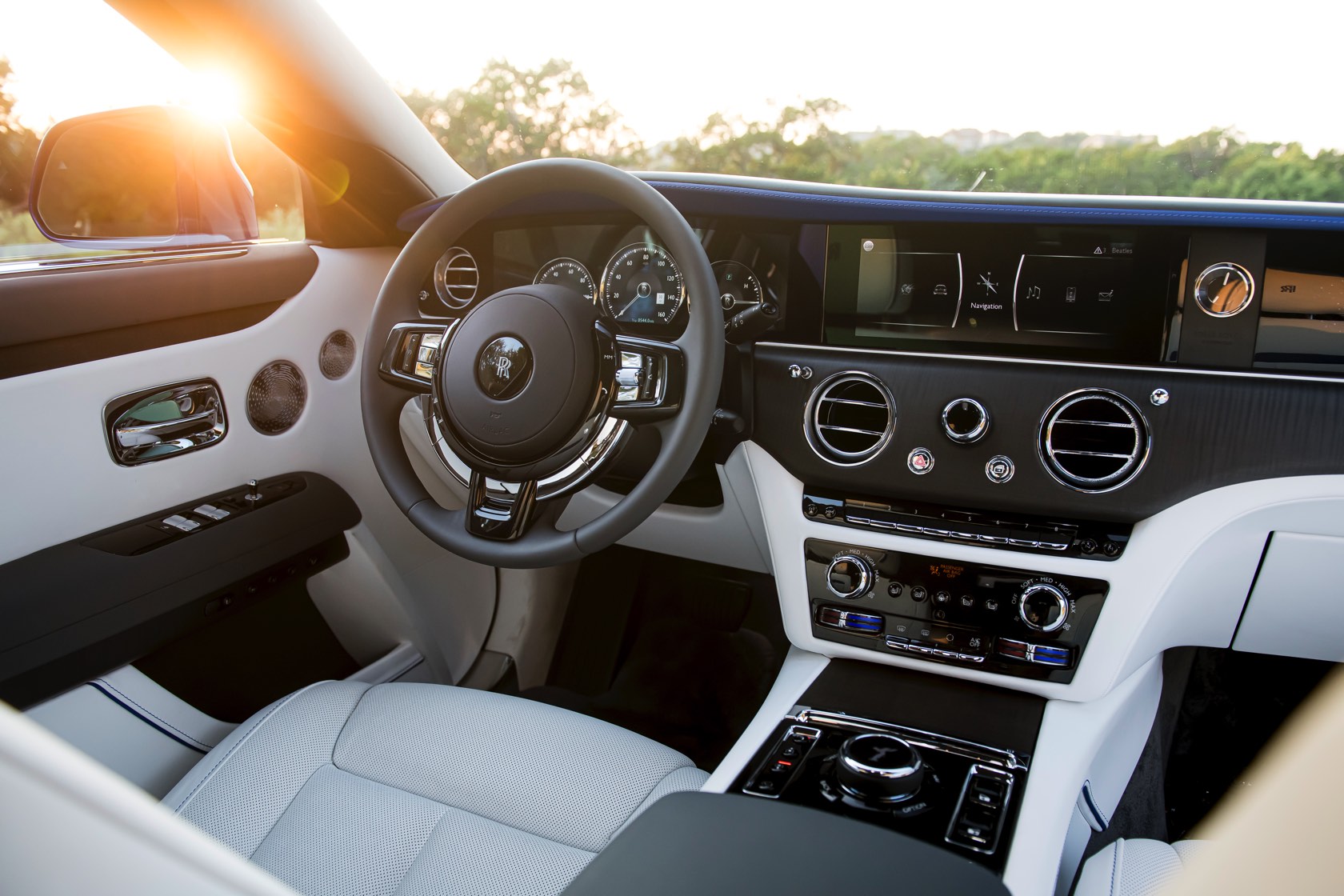 You still get the Starlight Headliner, Rolls-Royce splaying a field of stars across the roof, but the new Ghost also has a new illuminated nameplate on the passenger side of the dashboard. 152 LEDs rely on 90,000 laser-etched dots to help disperse their light evenly, creating a twinkling effect as your eyes move across the dash. 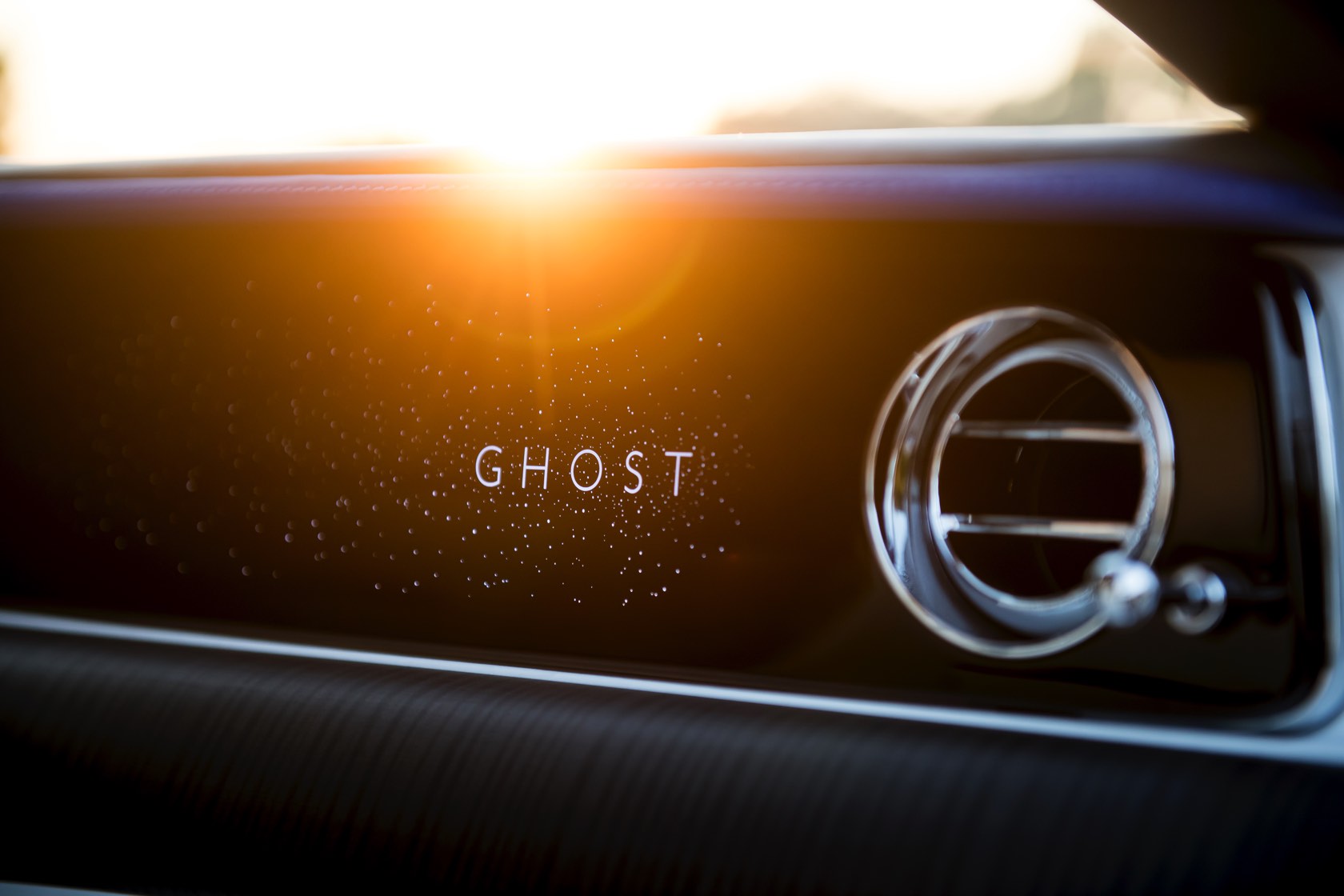 Looking ahead, of course, is recommended if you’re doing as Rolls-Royce expects and driving the 2021 Ghost yourself. Under the stretched hood is a retuned 6.75-liter twin-turbocharged V12 engine, offering 563 horsepower and 627 lb-ft of torque to all four wheels via an 8-speed automatic gearbox. For a long time, the automaker refused to talk about anything as base as specific power figures, but even in this age of transparency the powertrain’s focus is still on convincing you there’s a never-ending wave of torque to come. 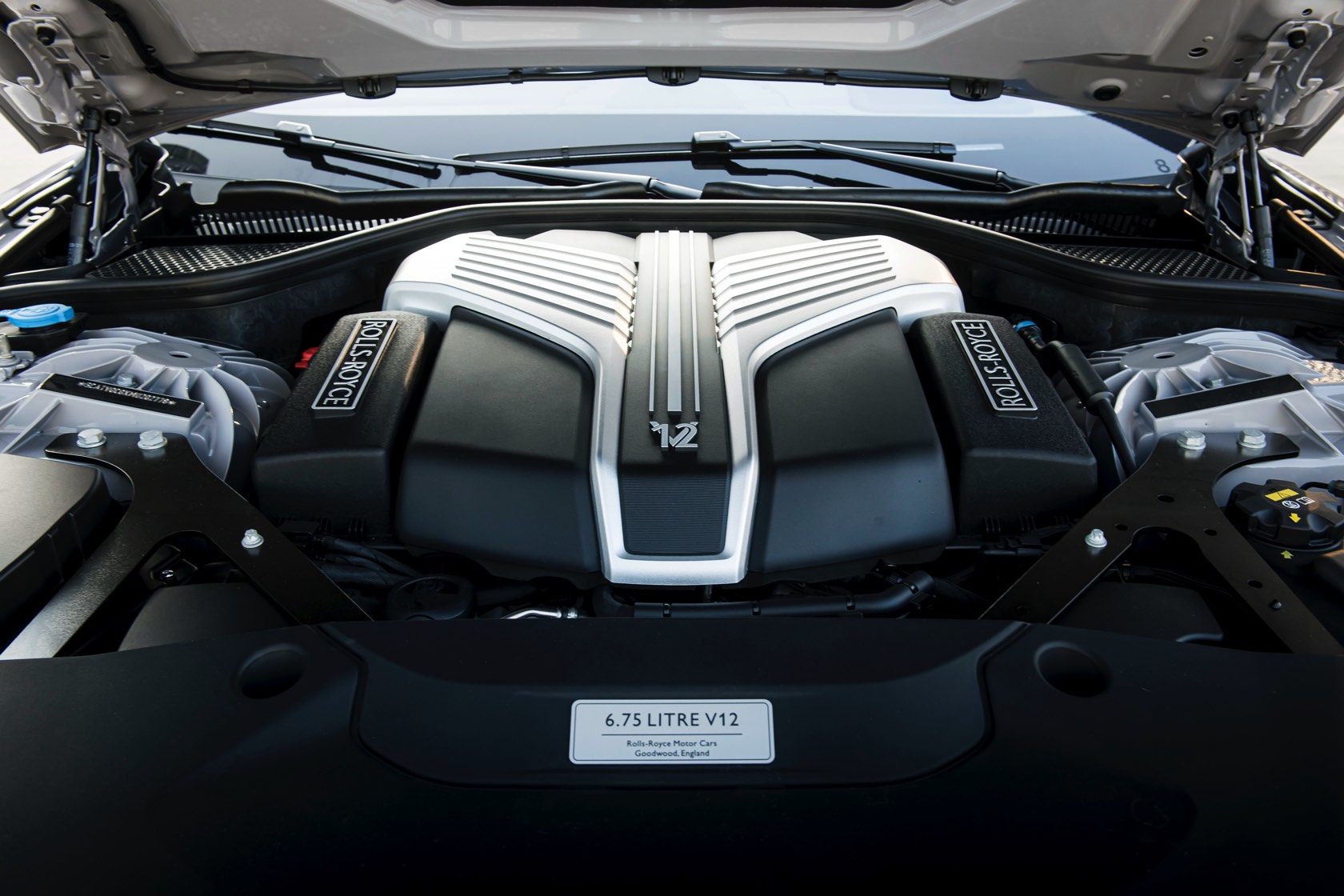 Peak torque arrives from as low as 1,600 rpm, an unstoppable flood before you’ve deigned to push too hard on the pedal. Even with this much power, though, the Ghost pushes on with nary a hum from the mighty V12 making it into the passenger compartment. 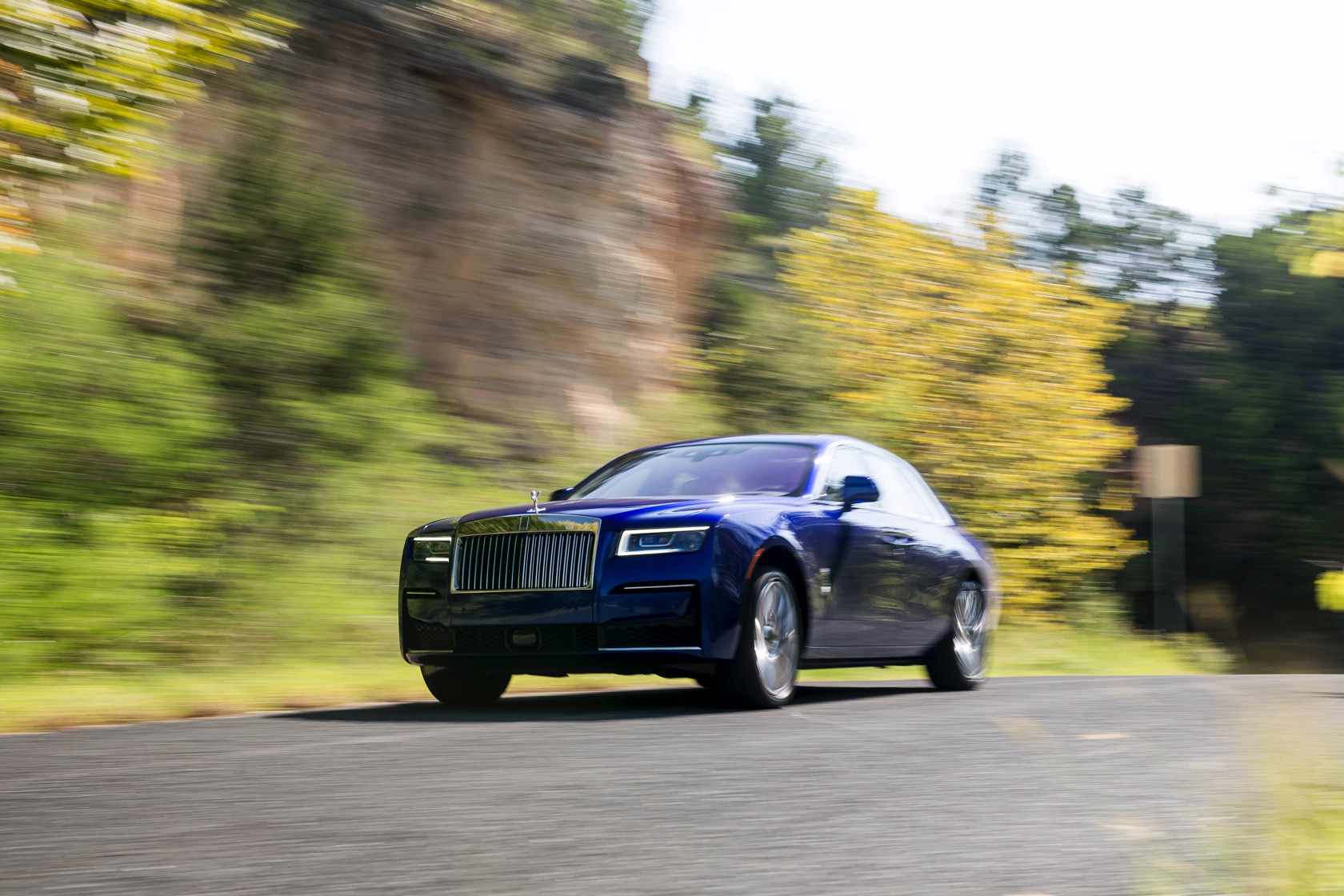 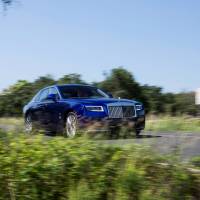 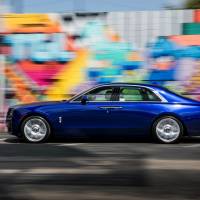 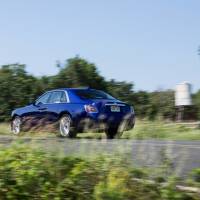 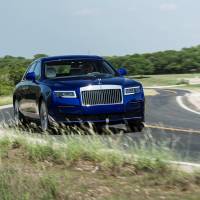 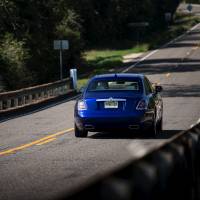 The handling lives up to the power output’s finesse. My test route challenged the Ghost with everything from slow and bumpy city driving, to high speeds and tight turns on and off camber. You truly lose yourself to the Ghost. Even with the new all-wheel drive system, one would suspect that the turning radius would be somewhat restricted but that’s simply not the case. Pulling into the lunch stop, I put maneuverability to the test in an extremely tight parking lot, and left with no scratches or scuffs to show from it. This is all because of the rear-wheel steering.

At lower driving speeds, the rear wheels steer in the opposite direction to decrease the turning radius; that’s extremely helpful should you ever decide to take the Ghost out grocery shopping or drop the kids off at school. On the flip side, the rear wheels turn in the same direction as the front wheels, which helps to stabilize the car at high speeds such as while changing lanes on the highway.

Traffic may just move out of your way, mind. The new Ghost still has the dominant pantheon grille iconic to Rolls-Royce, and just to ensure it’s noticed there are 20 LEDs that softly illuminate the grille vanes. The new headlights are more pronounced than before, while the Spirit of Ecstasy rests on the hood of the vehicle rather than above the grille. 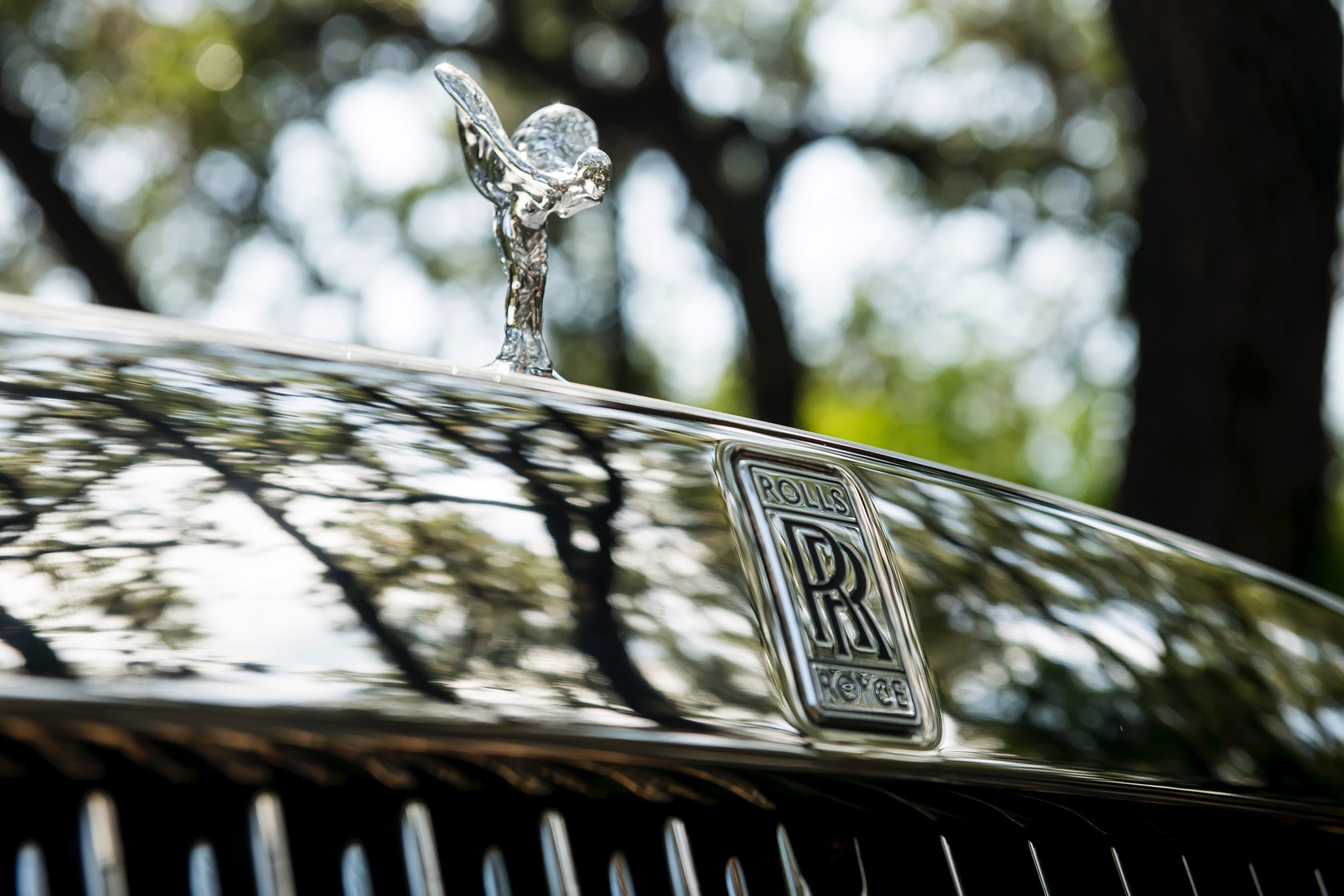 “Post Opulence is about refinement, reduction, simplicity – it’s about something that doesn’t shout at you, but it whispers,” Henry Cloke, Lead Designer of the Ghost, explained. “It was really important for us to make the car look like it has motion to it. It’s really a contrast between the front end where you’re really trying to show the width of the car, and the rear end doing exactly the opposite.”

The new Ghost is not ‘sportier’ in design, for lack of a better word. Instead, the absence of shut lines in the body conjure a different blend of solidity and dynamism. “And that’s really the engineering and designer sitting together and being able to package all of the elements,” Cloke continues, “but it was important to us to put that architectural work in so we can have so few feature lines and still get that sense of movement.”

It’s altogether cleaner and more elegant, to my eye. “The line from the bottom of the A-pillar that leads all the way to the roof and around the rear quarters and rear doors looks like one solid piece of metal,” Jonathan Sims, Vehicle Project Leader for the Ghost, points out. “There are no gutters, rain channels, or visible joints on the roof.”

Achieving all of this in an all-aluminum car is no easy feat, then again ducking challenges isn’t really an option when you’re promising the very best to buyers expecting you to go above and beyond. The answer, Rolls-Royce discovered, required both manpower and synchronization. “We have two groups of four people welding those corners in sync,” Sims reveals, “to avoid twisting the body.”

Complicated and demanding? Yes, and yes, but the combination of that all-aluminum architecture, all-wheel-drive, and all-wheel steering certainly pays dividends when you’re hustling the Ghost like a sports sedan. Make no mistake, the new Ghost remains a luxury limousine: you can feel its weight as you tug on the tiller. Yet it has a sense of agility that I’ve never felt before from a Rolls-Royce. 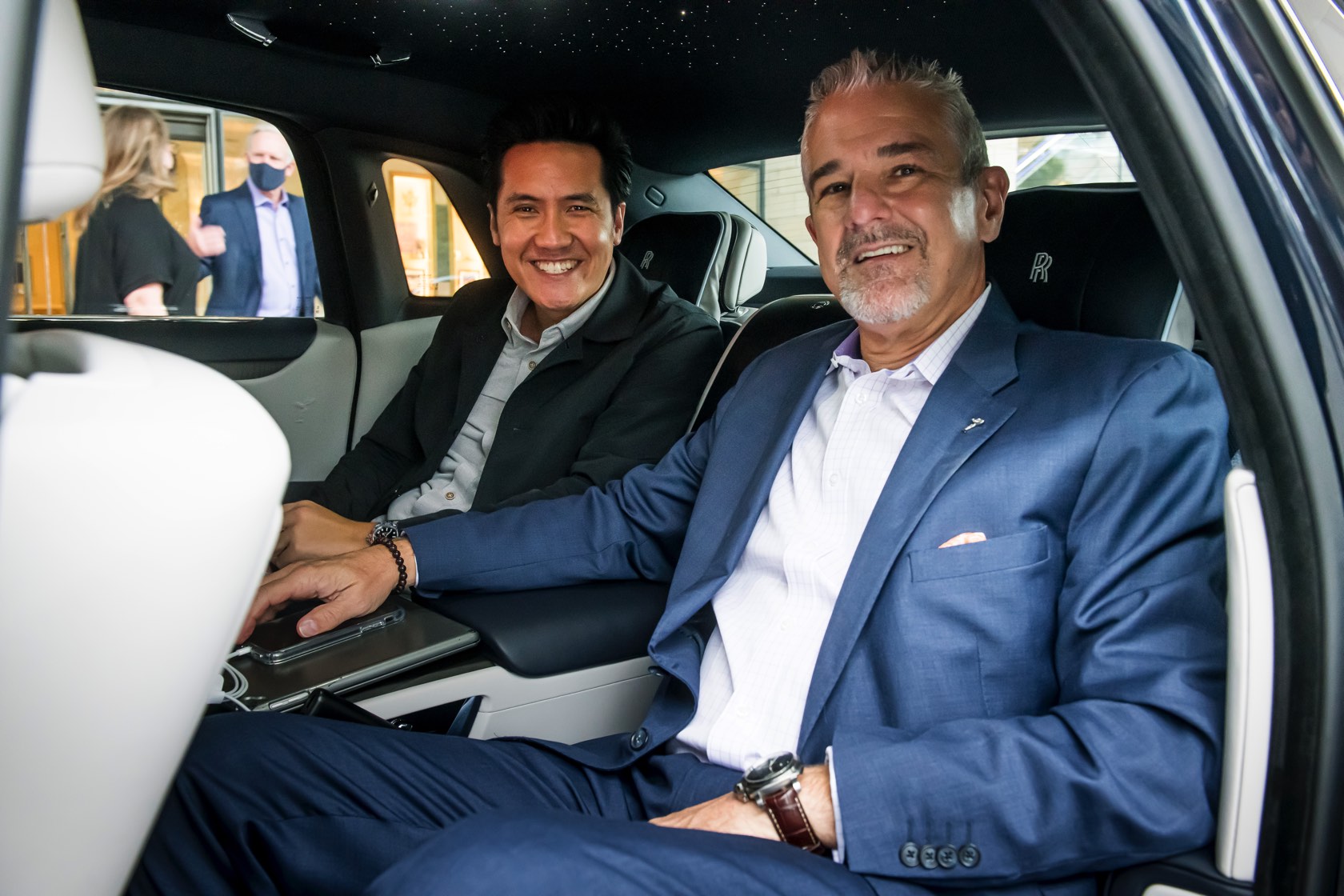 How many owners will actually take advantage of this newfound driving ability? Or, to put it another way, would it be simply sacrilegious to drive the Ghost that way, especially when the magic carpet ride – now all the better thanks to the Ghost’s trick front suspension – is even more capable of lulling you into perpetual bliss? Like few others in its industry, though, Rolls-Royce isn’t so much concerned with what you should do, only with what you can. 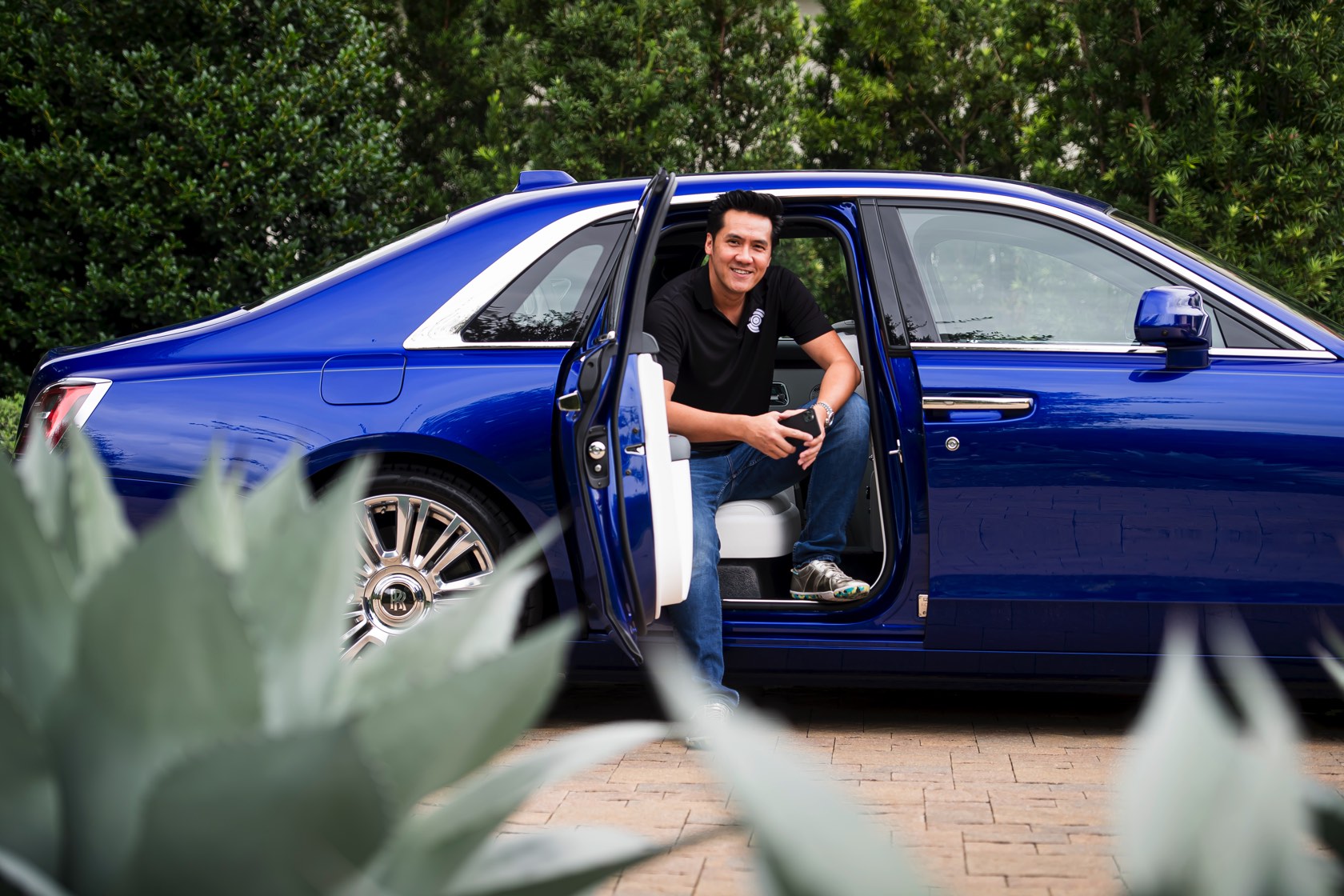 Post opulence or not, the new Rolls-Royce Ghost remains a triumph in modern engineering. The fact that it achieves that while simultaneously – and effortlessly – paying homage to its gloried past, well, that’s why it gets to wear the double-R badge. 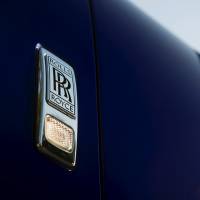 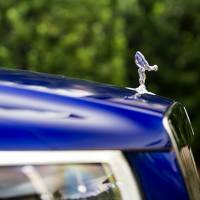 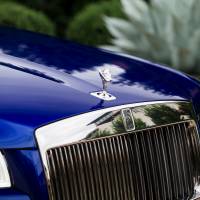 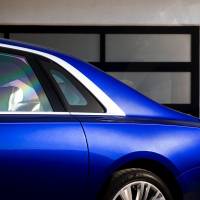 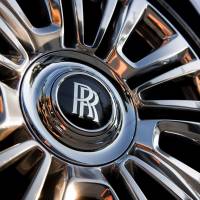