Out in the midwest, a bright red 2021 GMC Sierra 1500 AT4 Duramax Turbo-Diesel will turn more heads than a supercar. Welcomed by my new pickup brethren with raised thumbs, nonchalant nods, and turning heads, it was a stark reminder that – for much of the US – the flexibility and styling of a truck still makes them the go-to mode of transport. After living with the Sierra, for the most part I could understand why.

The fifth-gen Sierra 1500 is, of course, much the same pickup as the fourth-gen Chevrolet Silverado 1500, only with a nudge upscale as GM has long used to differentiate the brands. Compared to the somewhat fussy – and fairly controversial – front end of the Chevy, the GMC’s more traditional grille is as palatable as it is large. 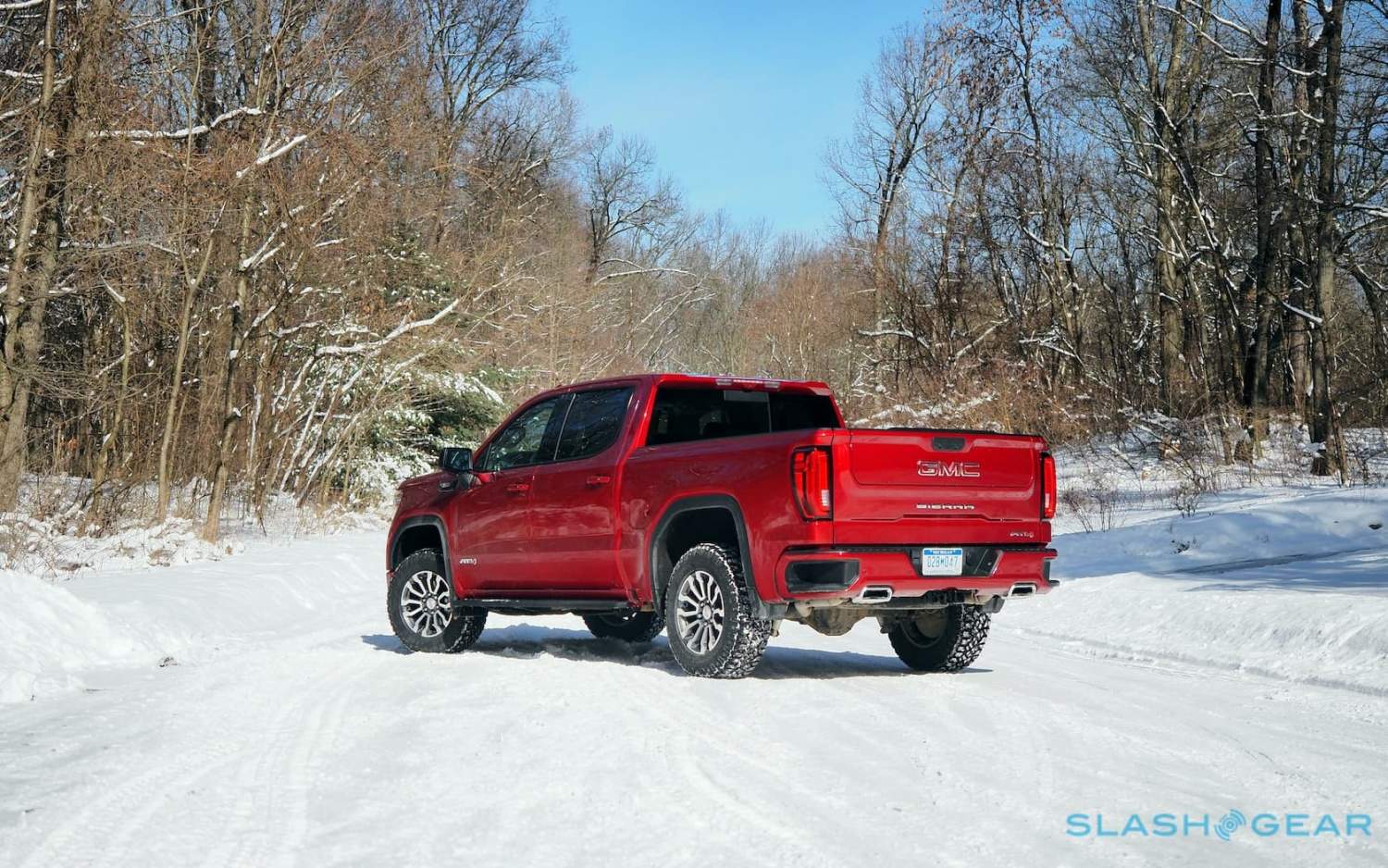 On the AT4 – sitting above the base Sierra, SLE, Elevation, and SLT versions, just below the most lavish Denali trim – that grille is body-colored, which helps reduce a little of the visual heft. It’s also more of an excuse to splash on the glorious Cayenne Red Tintcoat paint, a $645 option which readily rivals Mazda’s iconic red and pops nicely against the snow under the winter sun. LED headlamps and fog lamps are standard too, as is GMC’s MultiPro Tailgate. 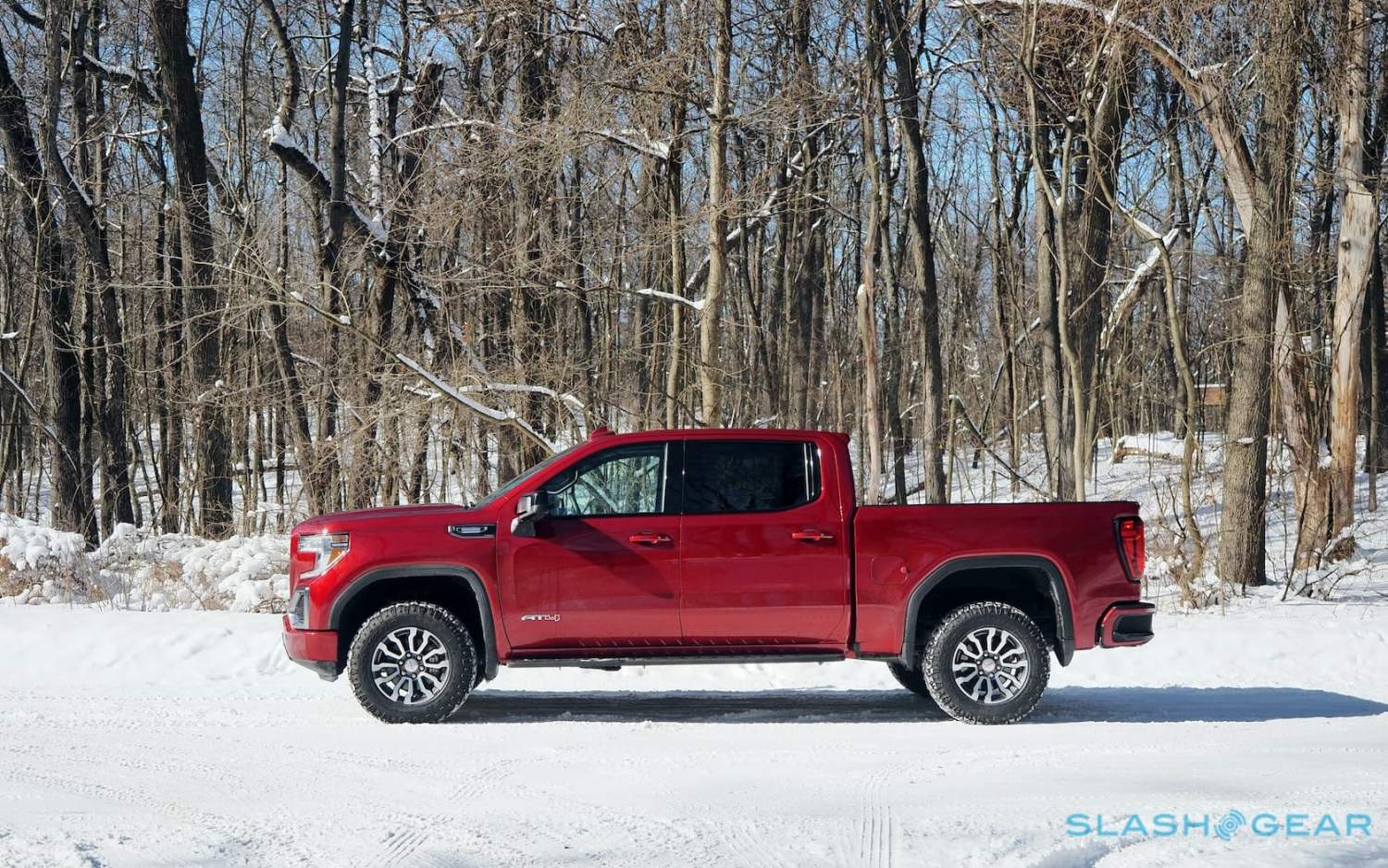 At the rear of either a short or standard box, it flexes like a Transformers toy to offer six different positions, including a full-width step and a useful two-level load stop. At 5’8 I’m not going to say I didn’t appreciate the leg-up, just as I did the fixed high-level side step that’s standard on the $3,700 AT4 Premium Package. 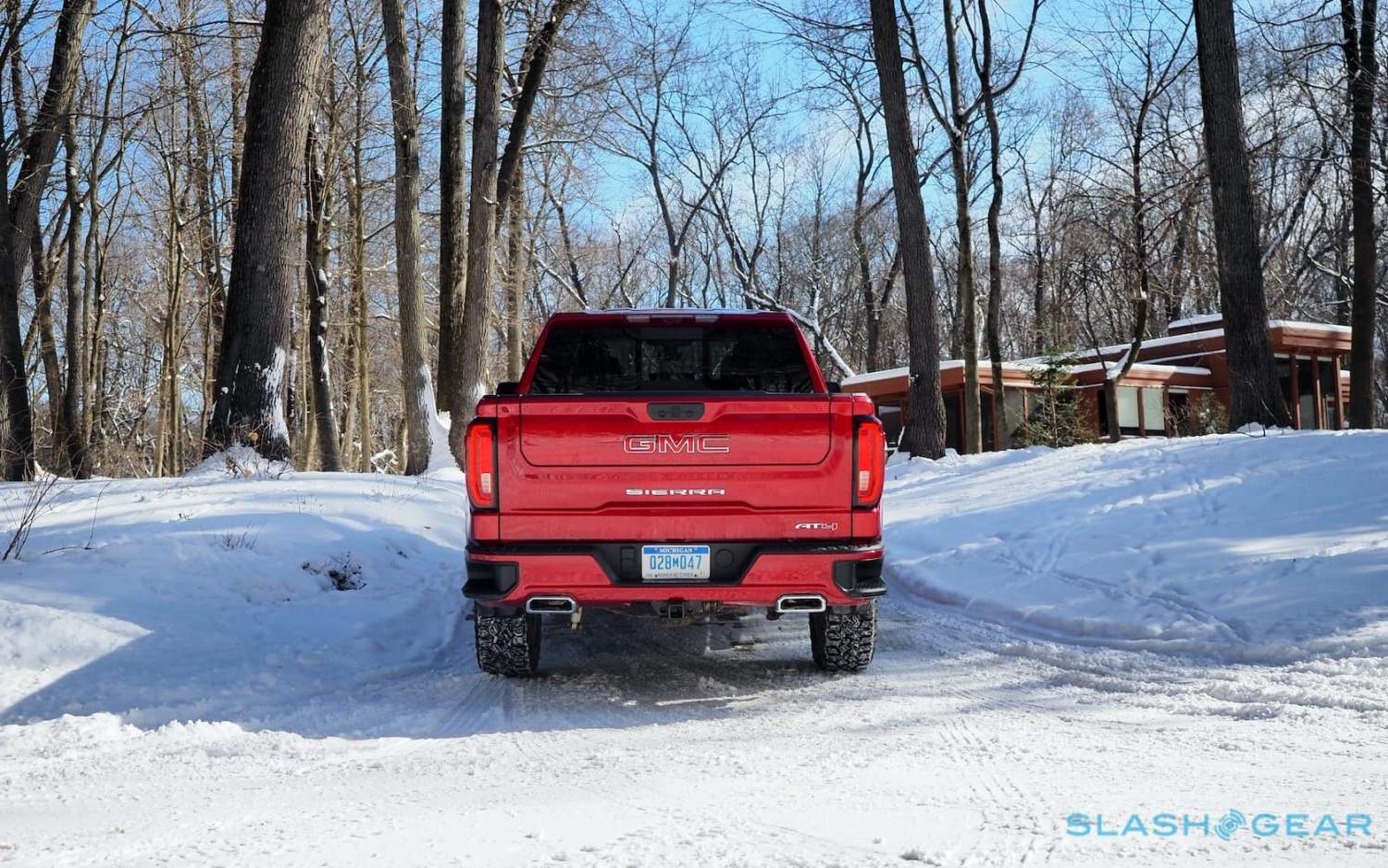 Helping garner me trucker attention was the AT4’s 2-inch lift and X31 suspension; there’s also an auto-locking rear differential and a two-speed Autotrac transfer case that works with the optional 4WD. 18-inch machined aluminum wheels wear beefy Goodyear Wrangler Territory all-terrain rubber. Denali models can be had with adaptive suspension, but such niceties aren’t offered on the AT4. 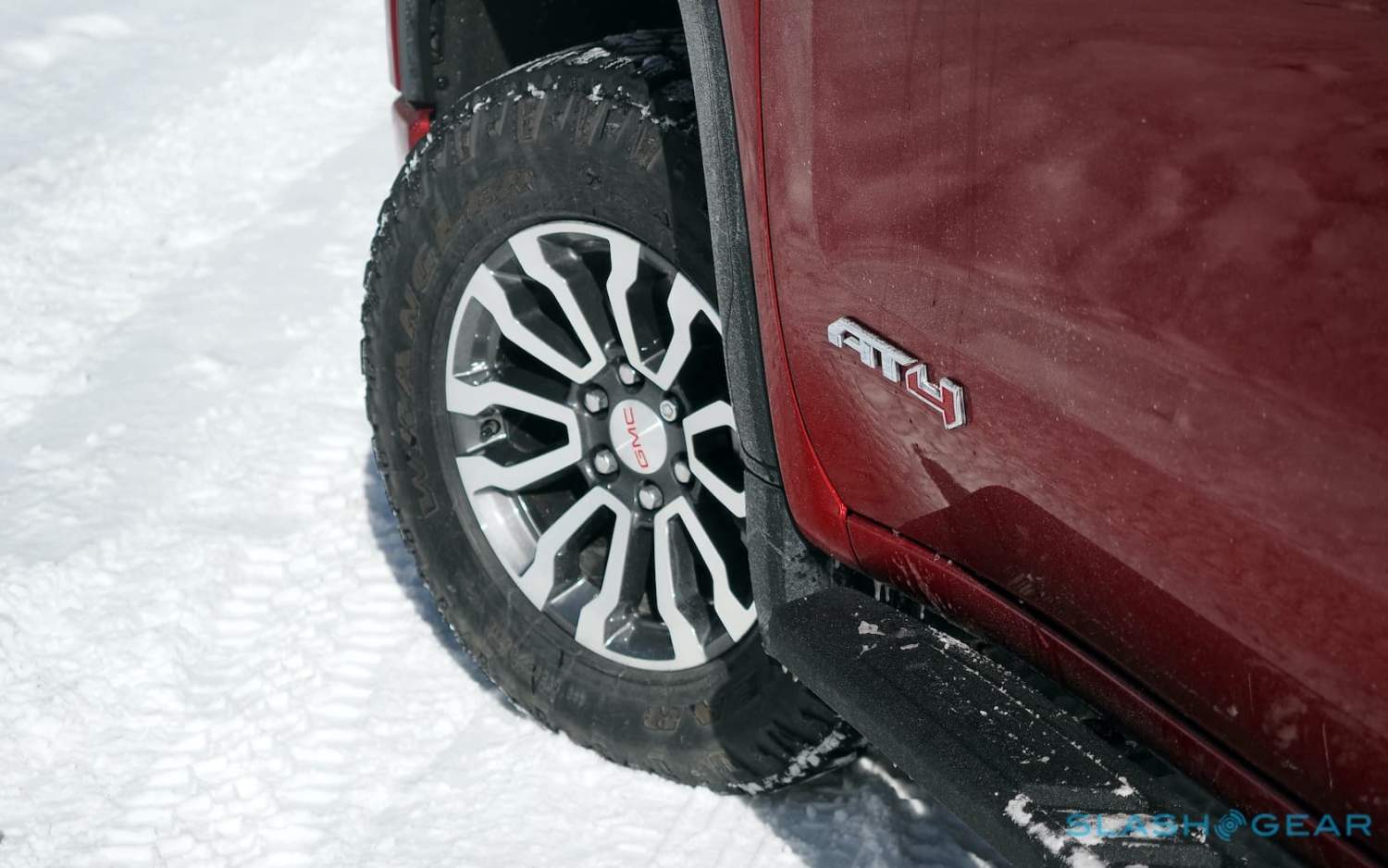 $995 adds the Duramax 3.0-liter inline-6 turbo-diesel engine. Its 277 horsepower falls short of even the smallest 2.7-liter turbo gas engine, but its 460 lb-ft of torque matches that of the biggest 6.2-liter V8 but arrives at a rewardingly-low 1,500 rpm. The V8 gas engine makes you wait for its max twist until 4,100 rpm. A 10-speed automatic transmission is standard, slurring nicely and neatly in the background and worthy of no complaints. 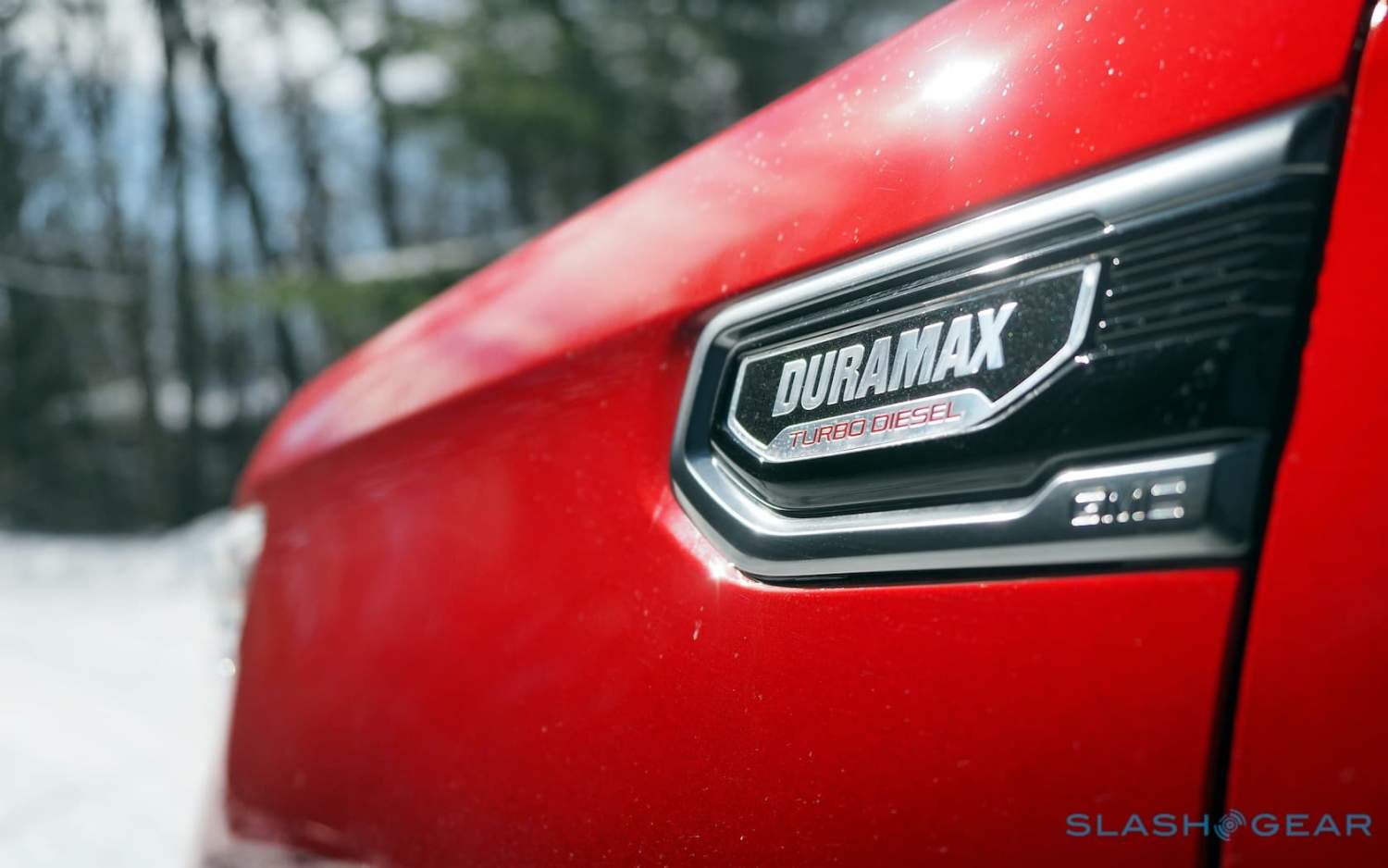 The diesel is a gem, not least because it’ll give you the best economy of the Sierra 1500 bunch. 22 mpg in the city, 26 mpg on the highway, and 24 mpg combined aren’t going to give true environmentalists much to sing about, but when the rest of GMC’s pickups fall somewhere in the teens it’s worth noting. In my predominantly city driving, mostly in 4WD mode with nary a thought to the weight of my right foot, I still managed 21.6 mpg.

You can tow 8,900 pounds, while the payload clocks in at 2,233 pounds. Forget rattly diesels of old: there’s a little more noise than some gas engines, but it’s actually a fairly pleasant mechanical thrum with a little growl when pushed, while bounce is kept to a minimum on all but the worst asphalt. It’s that surfeit of low-end torque that’s the gift which keeps on giving, however, sending the Sierra surging forward from stop lights and helping bely its general heft. 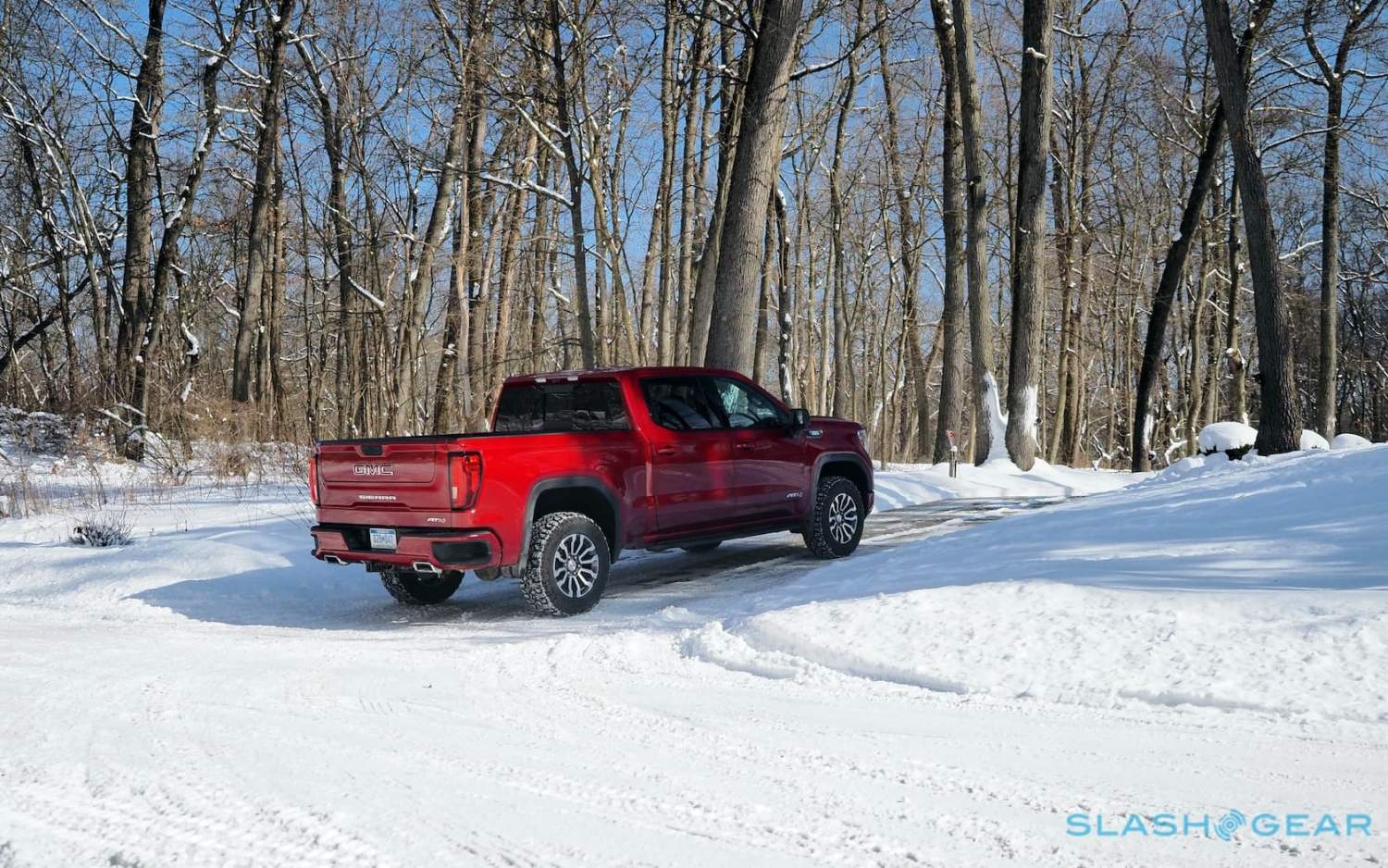 With the Midwest’s lake effect snow playing its havoc, that 4WD system and the AT4’s lift paid dividends. Navigating through yet-to-be-plowed side roads proved to be a non-issue, the Wrangler tires proving to have more than enough grip even when the going got icy.

Inside, there’s plenty of space and decent standard equipment. Keyless entry and remote-start, dual zone climate control, 10-way power front bucket seats with heating and ventilation, heated outer rear seats, a heated steering wheel with leather, and a flexible storage bin under the easily-raised rear 60/40 folding bench. You also get a 120V outlet in the dashboard (and a second in the bed). 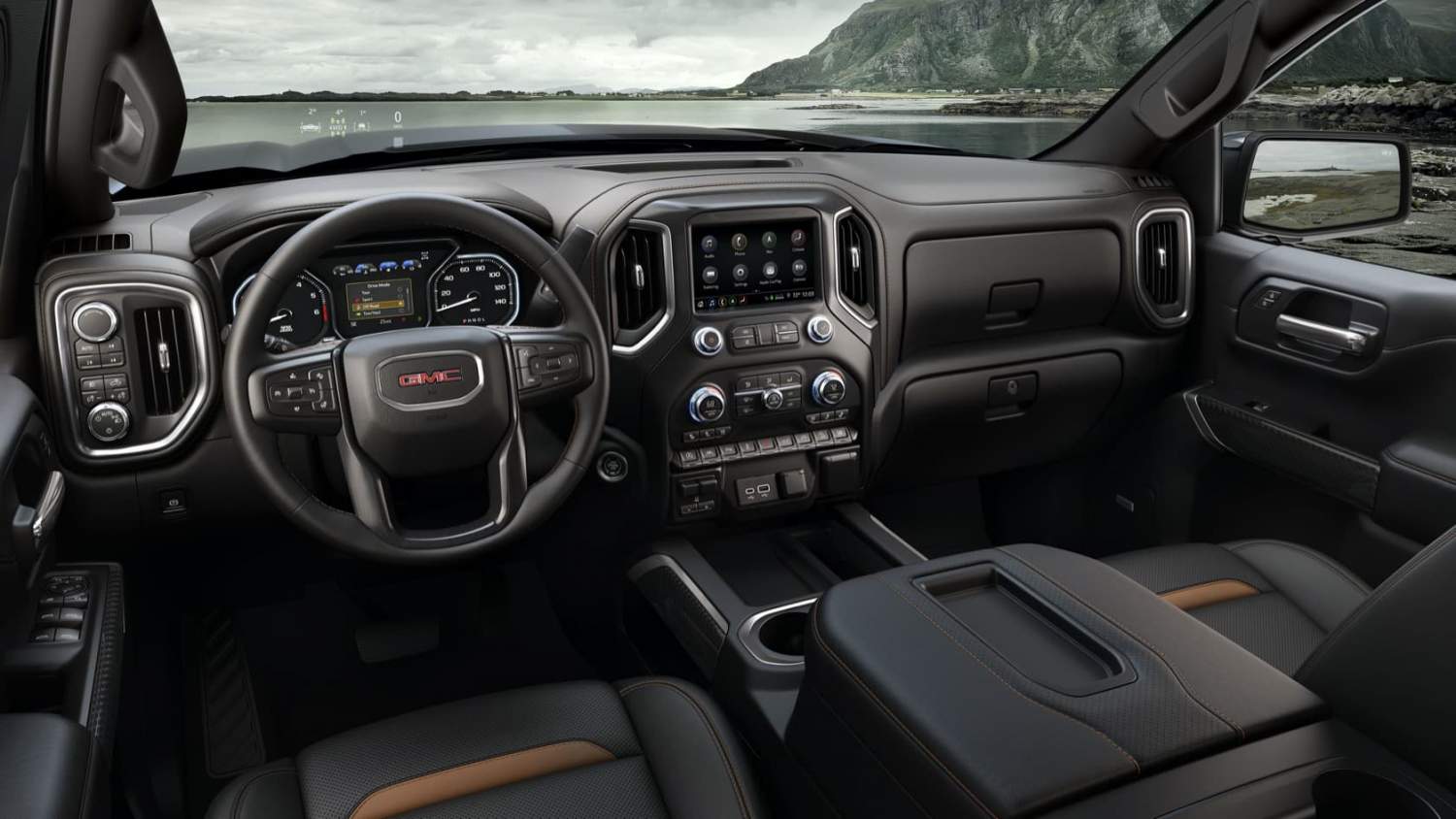 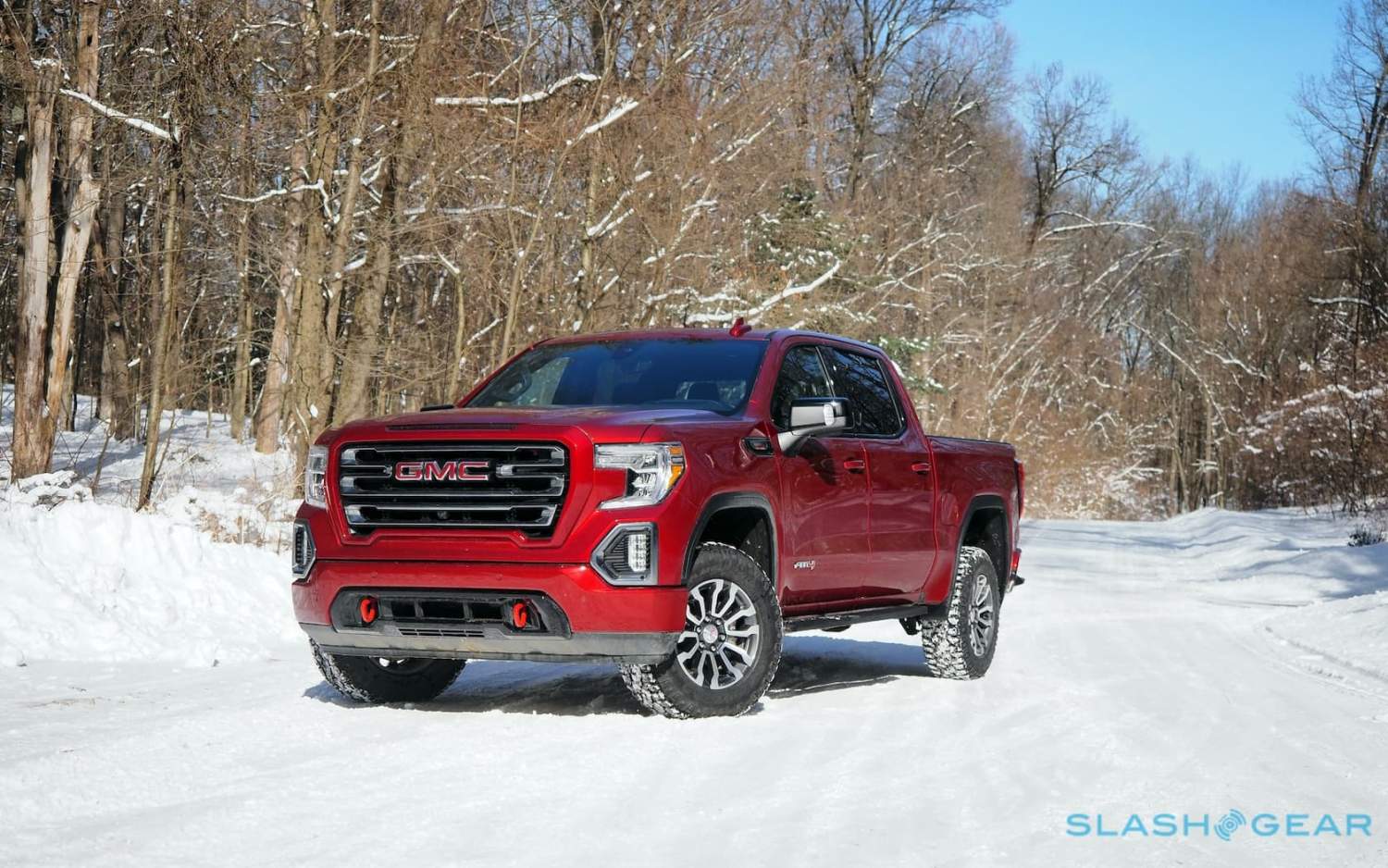 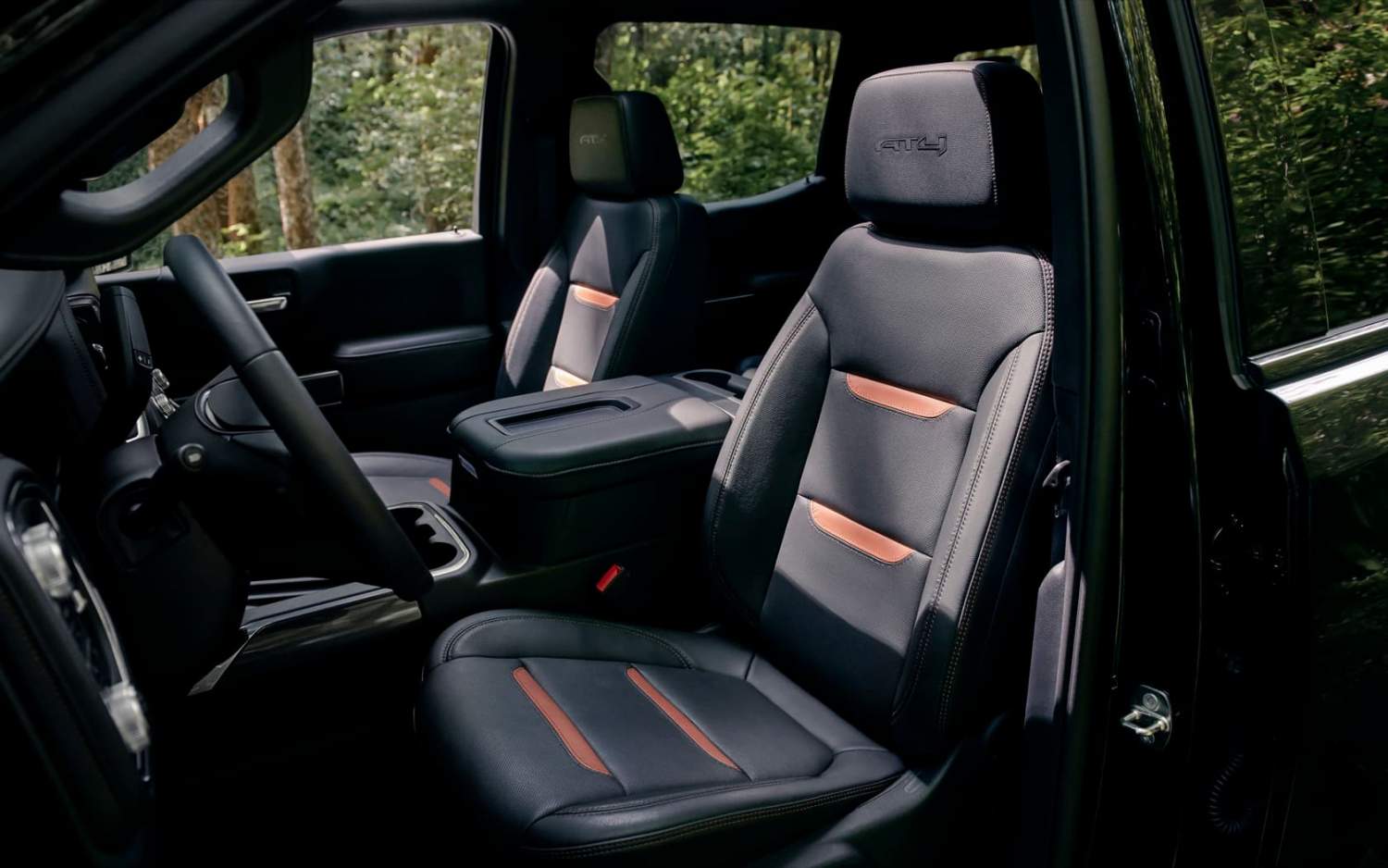 It’s all fairly comprehensive – even if, with the various packages, it took the $53,800 (plus $1,595 destination) pickup to $64,400 all-in – and spacious front and rear, though the cabin doesn’t feel as special as the spec sheet might suggest. Even at 8-inches the touchscreen feels small in the slab-like dash, and there are a whole lot of buttons and knobs that start to feel a lot alike (and a lot like what you’d find in the cheaper Silverado, too). 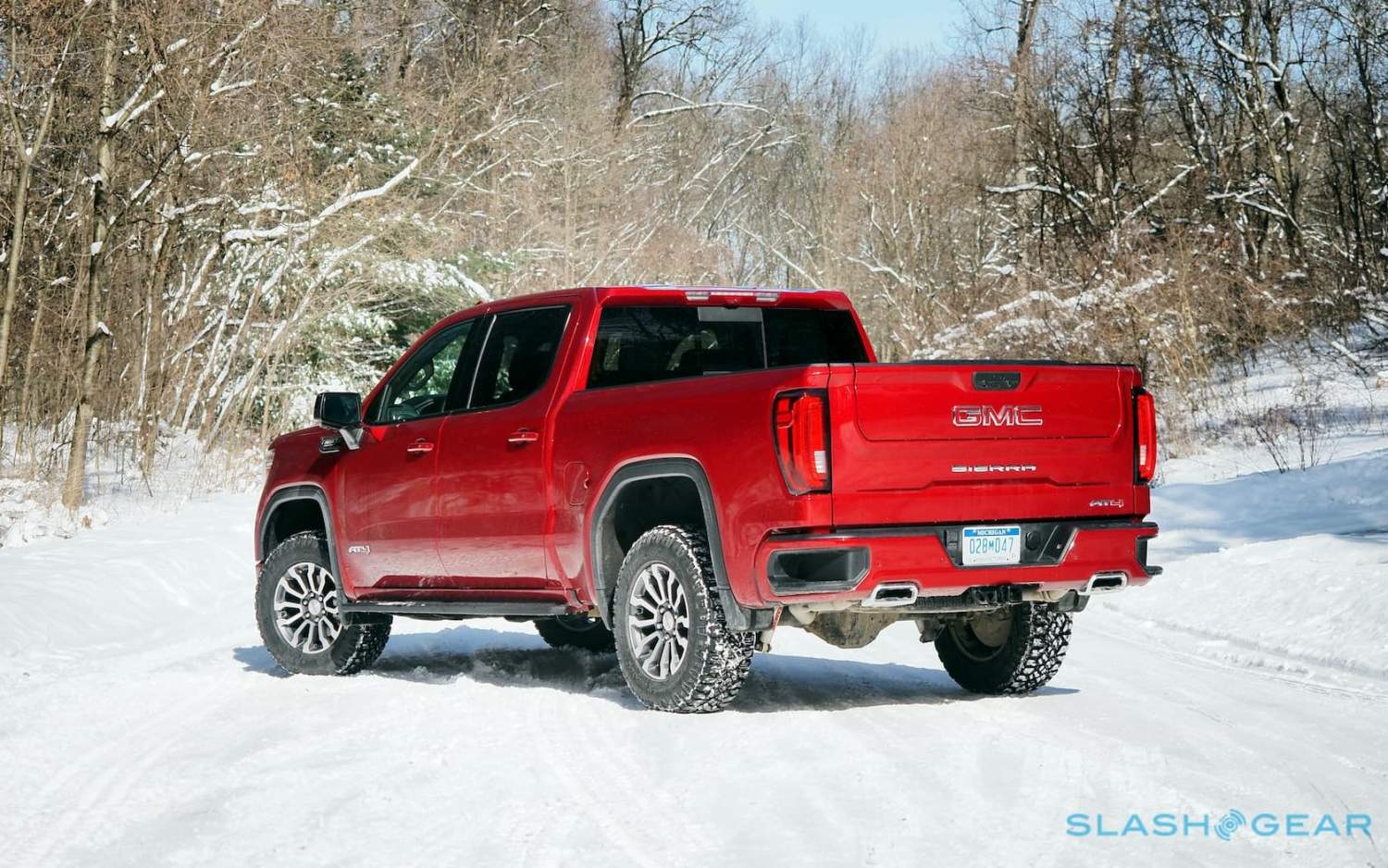 That’s a problem, because rivals are pushing truck cabin aesthetics as much as capabilities. The latest Ram 1500 and Ford F-150 have big displays and more ergonomically-pleasing dashboards; the Sierra 1500 AT4 is fine inside, but I’m not sure “fine” cuts it these days. Especially not when you’re paying near-$65k for the privilege. 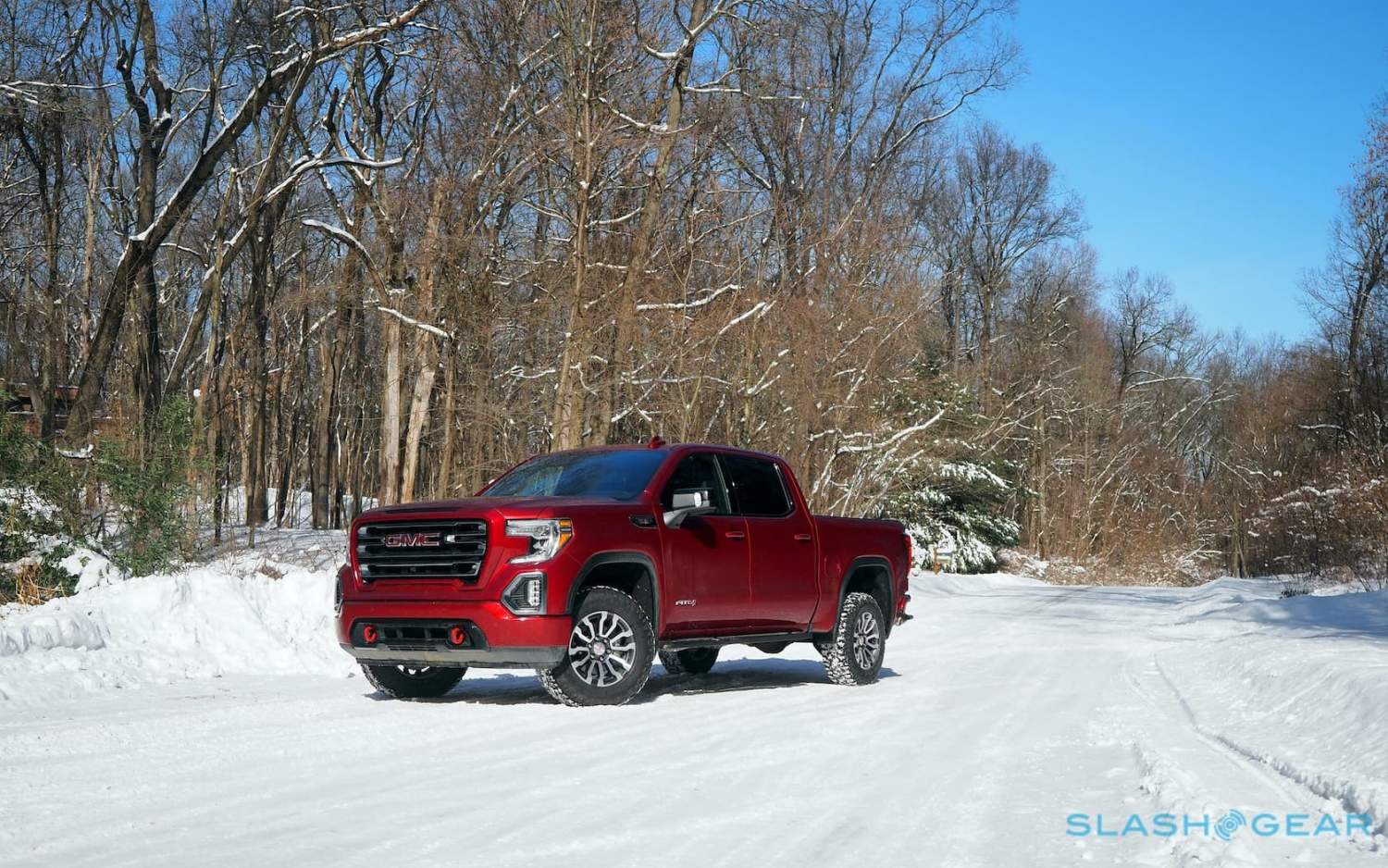 A general recognition that pickup buyers are looking for more than just cargo capabilities and shouldn’t be left out of the tech cycle is good for everyone, even if GMC feels like it’s lagging a little behind Ford and Ram on that front. In the end, it’s the 2021 Sierra 1500 AT4’s sure-footedness and that burly, lovable turbo diesel which shine, while I happen to think the AT4 trim looks the best of the bunch – including what Chevy will sell you.