There’s subtle, and then there’s 2021 BMW M550i xDrive subtle. Not quite the feistiest of the new 5 Series line-up, the M550i promises nine-tenths of the horsepower of the range-topping M5 but wrapped up in an altogether more surreptitious package. That’s bad news for those who love to stand out in their sports sedan, but an appealing prospect for those who prefer to fly under the radar. 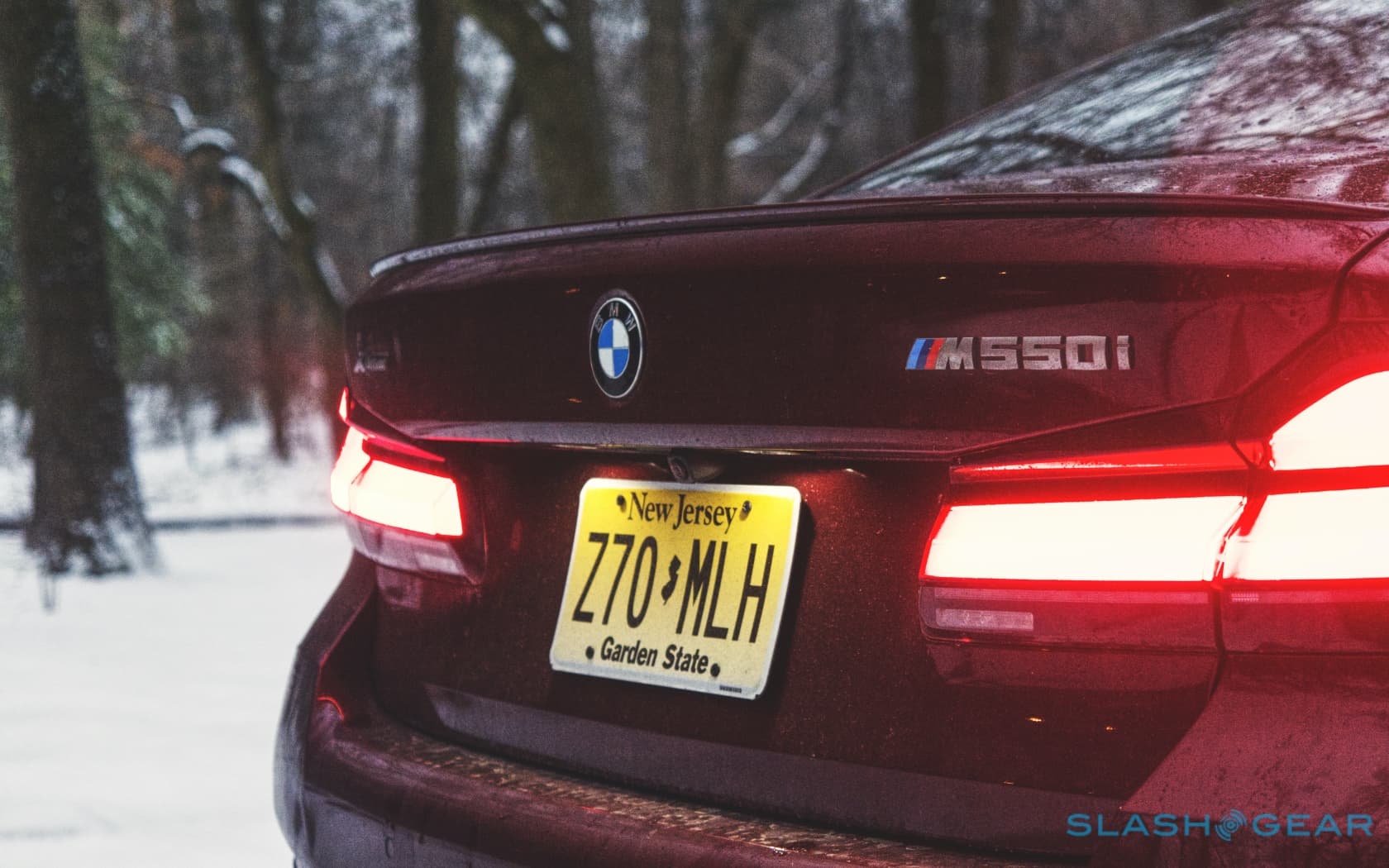 0-60 mph arrives in 3.6 seconds in the M550i, a hardly-leisurely 0.4 seconds slower than the M5 can manage it. Top speed is 130 mph, unlockable to 155 mph if you pay extra. The 8-speed Sport Automatic transmission offers manual and sport modes along with Launch Control, in both cases, though the exact ratios differ between the cars.

You could argue there are two main differences. The first is the M5’s rear-wheel drive capability, which forces what’s normally an all-wheel drive car to push all its power to the rear axle instead. That is excellent news if you have wide, empty roads or a convenient race track, and are the sort of person who enjoys swinging your tail around. On more mainstream roads, meanwhile, the fact that engaging the RWD mode also involves shutting off some of the electronic systems that help keep the M5 stable probably limits its usefulness. 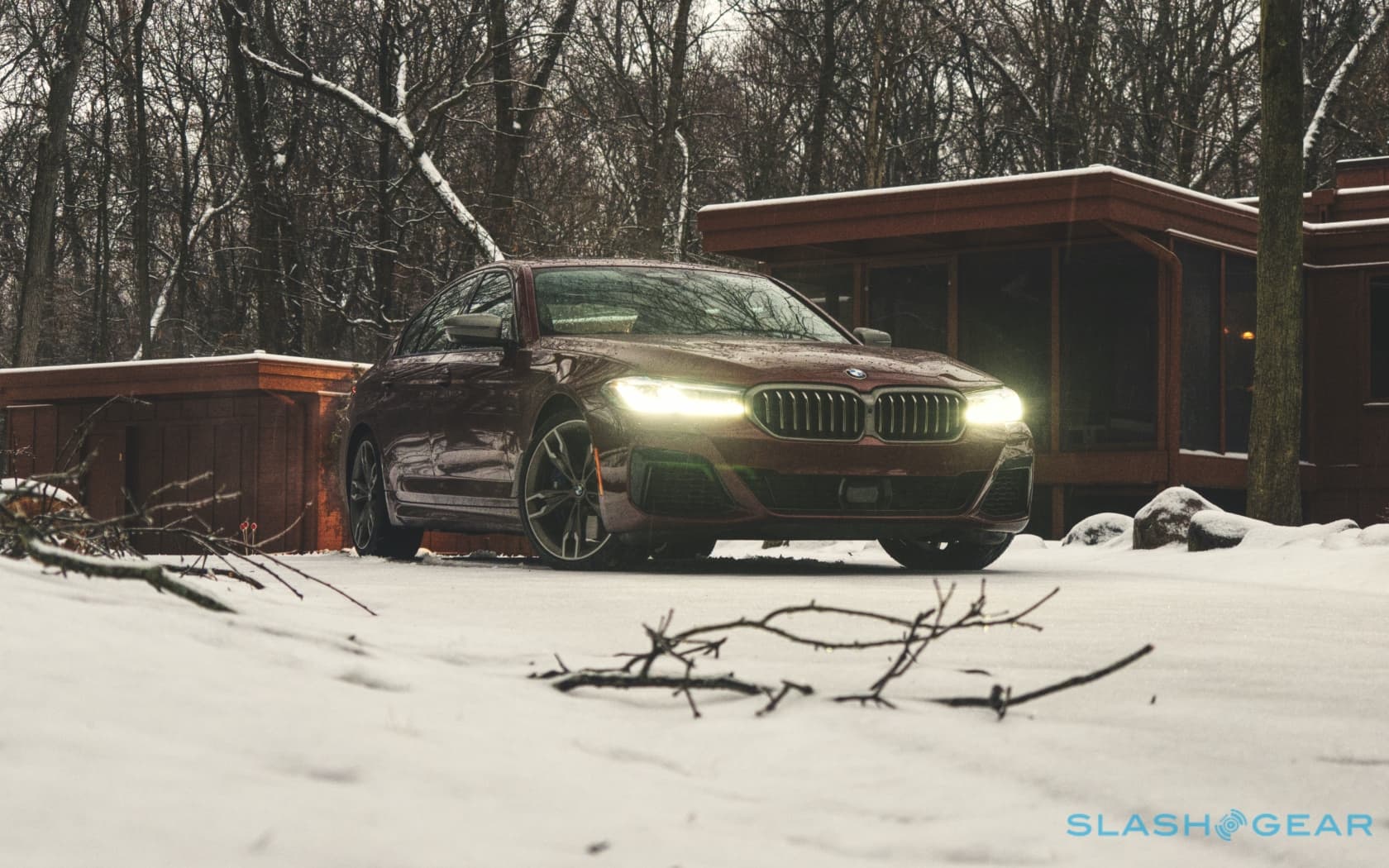 The M550i has BMW’s xDrive AWD system as standard, too, and will typically bias toward the rear wheels unless traction demands otherwise. It has an M Sport Differential, Adaptive M Suspension with electronically controlled dampers, and M Sport brakes, but not some of the fancier handling features of the M5. Then again, it starts at $76,800 (plus $995 destination) whereas an M5 will set you back $103,500 before destination.

The other key difference is styling. Having bypassed BMW’s current snout-du-jour, both sedans actually look fairly restrained alongside some of the automaker’s other recent M-blessed exotica. All the same, the M550i keeps its vents and air splitters more in keeping with the rest of the 5 Series; it doesn’t have the front fender “M gills” and there’s a little less chrome trim. 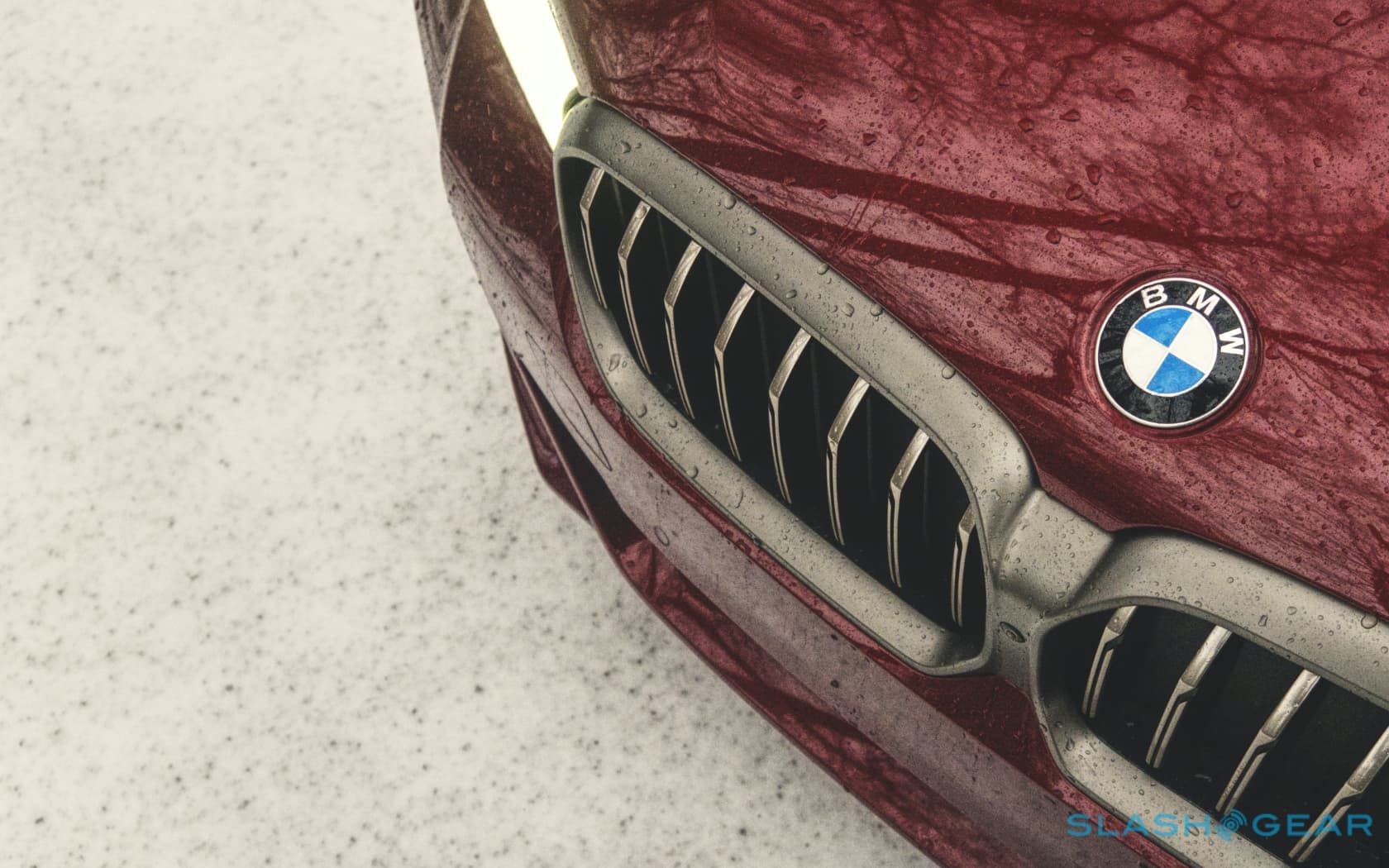 Honestly, you could argue it’s perhaps too discreet. Parked up, the M wheels – 19-inches as standard, but upgraded to the $1,100 20-inch versions and outfitted, in my case, with Pirelli SOTTOZERO winter rubber – are eye-catching, but on the move you could easily mistake the M550i for a “regular” 5 Series. The $1,950 Aventurin Red Metallic paint makes a nice change from the usual black, silver, gray, or white that dominates the color palette for luxury cars right now, but it only adds to the somewhat clandestine feel. 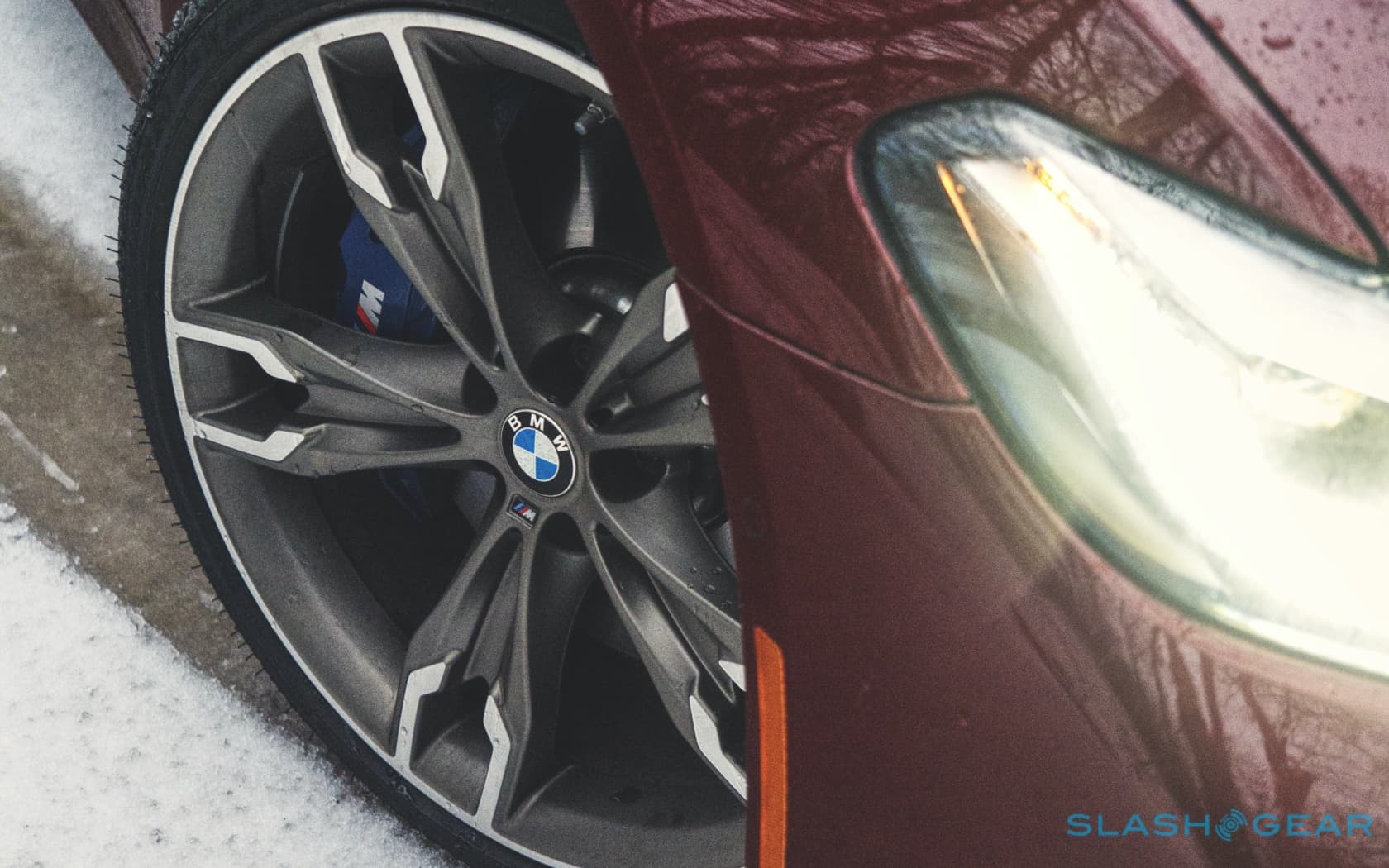 The driver gets the last laugh, though. It may not have quite as many horses – or make quite as raucous a sound – as the M5, but the M550i is no slowpoke. Straight-line speed is prodigious, the AWD proving tenacious even on slushy Midwest winter roads. There’s no waiting for the turbos to weigh in, no lag from the gearbox. Just your right foot going down and then whoosh, you’re getting perilously close to three figures before you realize it.

Come the corners, the low center of gravity and all that grip are an excellent reminder of why sports sedans make so much more sense than big, over-powered SUVs and crossovers. BMW has no shortage of those, but none can handle quite like the M550i manages. It feels like a much smaller car, in the best possible ways, nimble and effortless. The $3,600 Dynamic Handling Package helps there, with its lowered Adaptive M Suspension Professional, Active Roll Stabilization, and rear-wheel steering that help keep the M550i flat and reduce its turning circle. 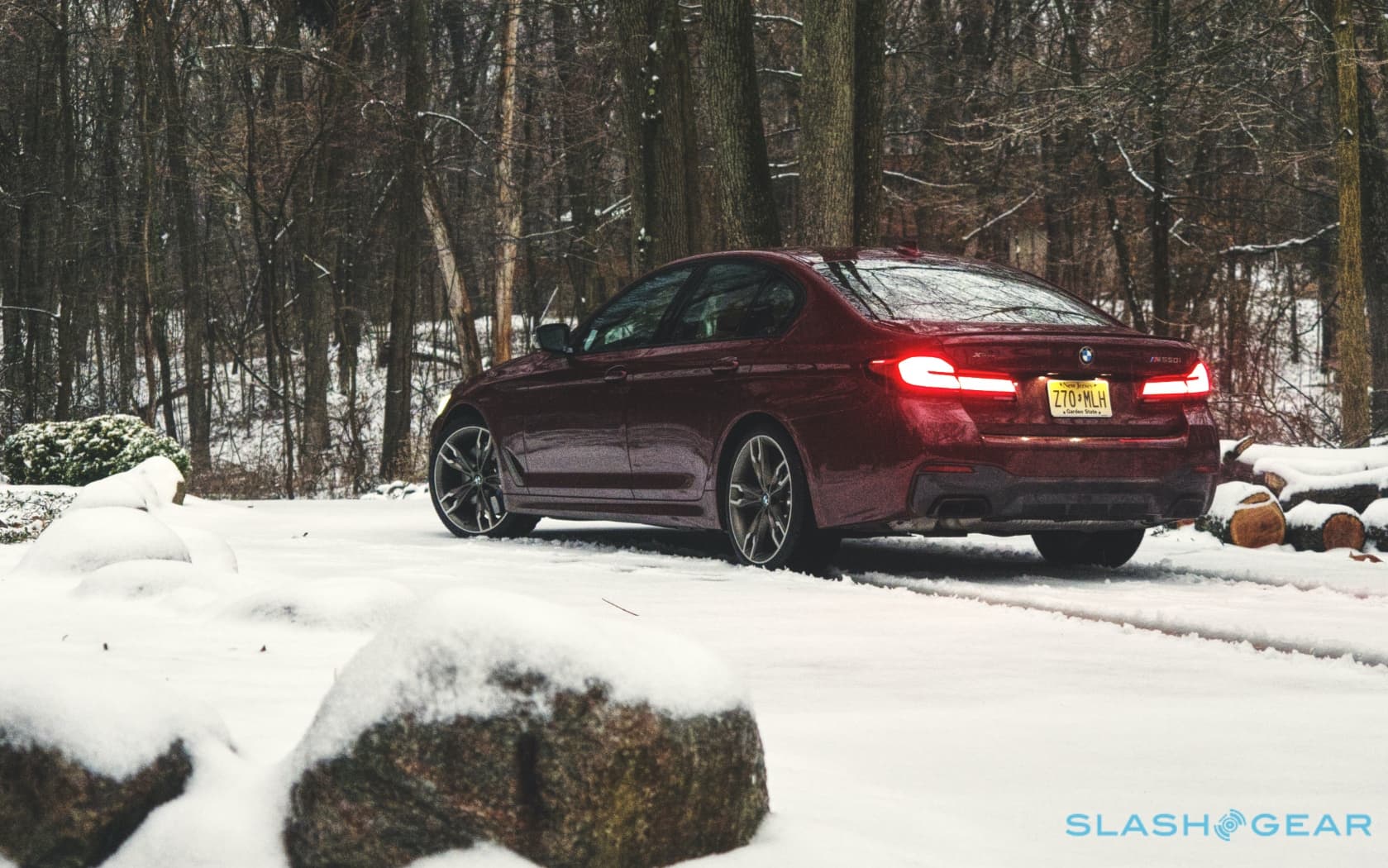 Because this isn’t tuned to the nth degree for maximum performance, though, the 2021 M550i makes for a far more livable car. Hit the Comfort button, or leave the BMW in Adaptive mode to make its own suspension, engine, and transmission decisions, and there’s no compromise in cosseting despite its ability to go fast.

Unsurprisingly, just how much of the good treatment you get depends on how liberal you are with the options. As standard, there’s leather on the seats and wheel with contrast stitching; fancier Nappa leather is a $1,000 upgrade. Front seats get power adjustment, but you’ll pay extra for heating, cooling, and massage. The power moonroof is standard, along with full LED adaptive headlights, a power trunk lid, and keyless entry. 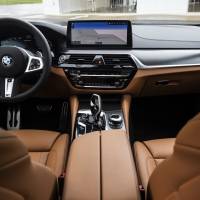 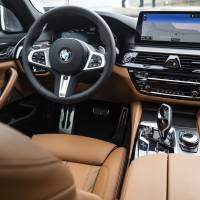 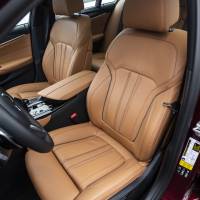 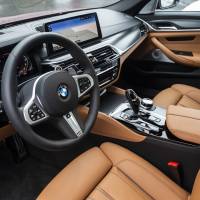 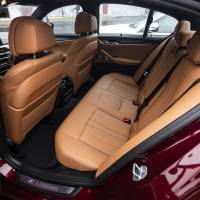 Infotainment uses the standard 12.3-inch touchscreen we’ve seen in other recent BMWs, and there’s navigation and a second 12.3-inch display to show the driver’s gauges. Wireless Apple CarPlay and wired Android Auto are standard, while a Bowers & Wilkins audio system is a $3,400 option. Parking sensors and a reversing camera are standard, but 360-cameras come as part of the $800 Parking Assistance Package along with auto-park. The $2,150 Executive Package adds rear sunshades, a head-up display, wireless phone charging, gesture control, and more USB ports.

Blind spot warnings, lane departure warnings, and forward collision warnings with low-speed brake assistance are included as standard, with the $1,700 Driving Assistance Plus package adding BMW’s Traffic Jam Assistant and Active Driving Assistant Pro. That means adaptive cruise control with lane-centering and evasive maneuver assistance, among other things. BMW’s steering assistance is surprisingly capable, and works both on and off divided highways, though it does demand that you keep your hand on the wheel. 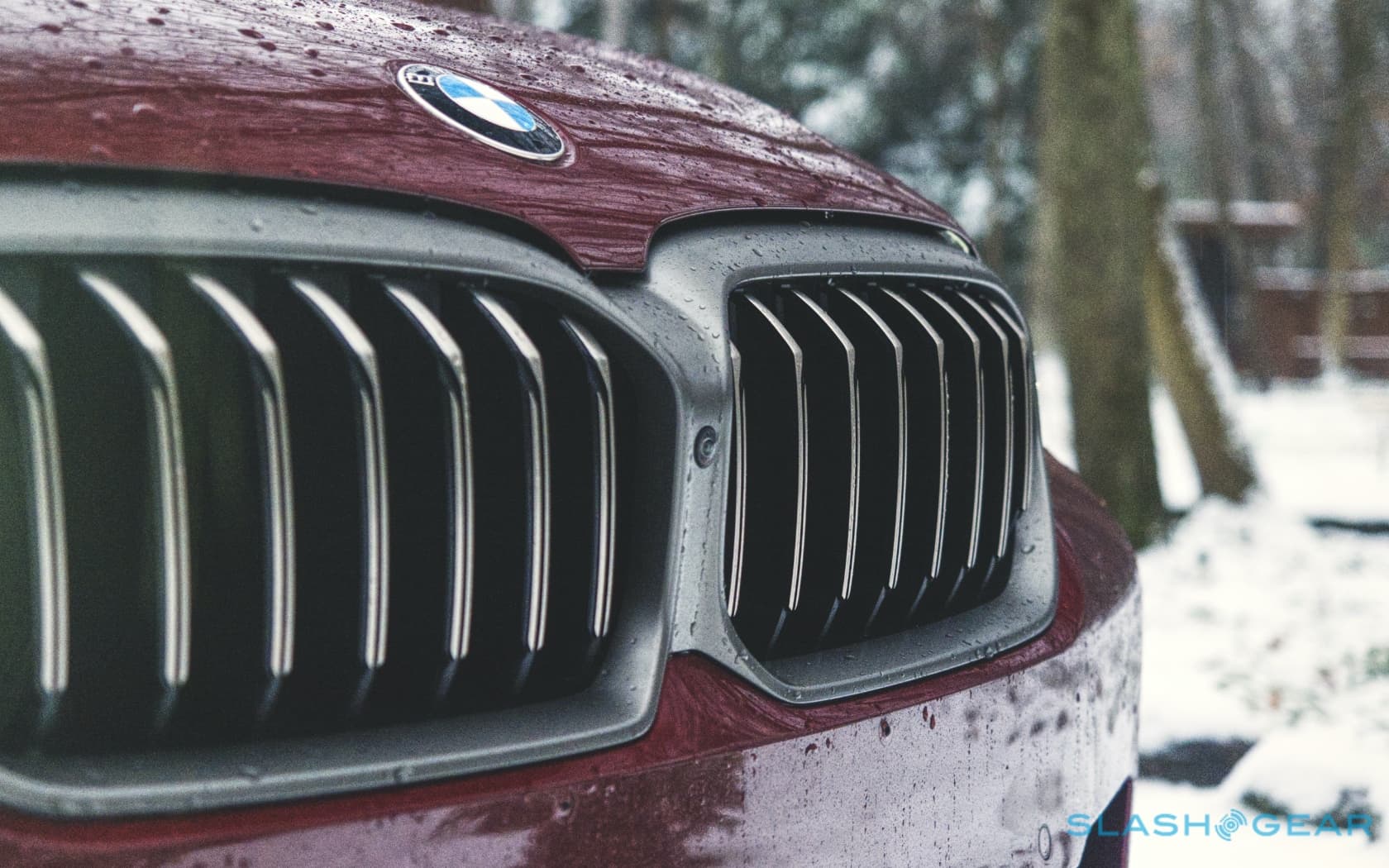 In the rear there’s plenty of space for two adults, with the center seat more child-proportioned. The trunk gets a reasonable 14 cu-ft to play with, expanding with the 40/20/40 split rear bench if required. Sure, you’ll get much more cargo space in an SUV like the 2021 X5 M50i, but you’ll also go slower and use more gas. The EPA rates the M550i for 17 mpg city, 25 mpg highway, and 20 mpg combined, and as long as you’re not driving too eagerly they’re fairly easy numbers to hit.

Problem is, it’s also very easy to hit numbers close to the M5 when it comes to pricing. My review car clocked in at $93,735 including destination, but still didn’t have front ventilated seats or massage. Indeed there are some embarrassing omissions in standard cabin comfort, BMW clearly spending the bulk of your money on performance. 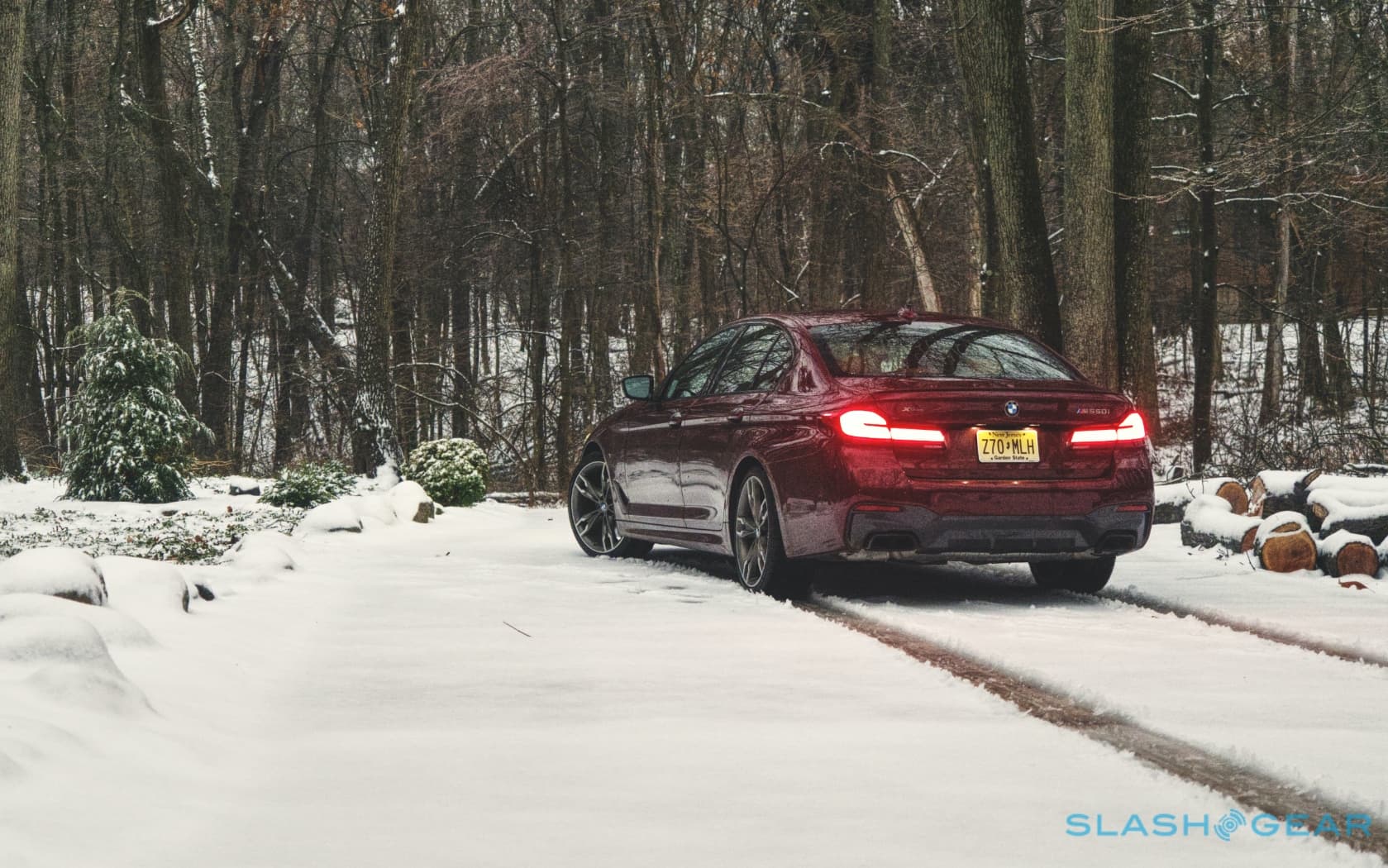 It’s a decision I can’t really criticize too much. The 2021 M550i xDrive may be brand new, but it sticks to a more conservative era of BMW styling that I suspect will appeal to a lot of people who find the more “shouty” aesthetic elsewhere in the line-up a turn-off. Behind the wheel, though, there’s little compromise when it comes to fast fun, and while it might not be your first pick for a track, in everyday use that seems like a meaningless criticism.

I’m glad the M5 exists: it’s a potent halo sedan, and a commitment by BMW to the idea that its future consists of more than just crossovers and SUVs. At the same time, I’m also glad the M550i has a space in the range. Usable performance is matched with reassuring comfort, even if this particular BMW may not shout about its breadth of talents.