As candidates for a track-tuned upgrades go, Toyota’s two largest sedans might not come to mind first, but the 2020 Camry TRD and 2020 Avalon TRD would like to buck those expectations. Handiwork of the Toyota Racing Development (TRD) team in collaboration with Calty, the automaker’s US design studio, the pair of sporting sedans promise to be more than just a body kit.

In the US, at least, TRD has more awareness as a truck package. After all, the nameplate is commonly associated with jacked-up pickups and SUVs with upgraded off-road talents.

For the 2020 Camry TRD and Avalon TRD, though, it was a different sort of performance that was considered. Starting with the Camry SE and the Avalon XSE, a whole host of chassis and suspension changes have been introduced, making the sedans firmer and stiffer. New aero elements crank up the aggressiveness of the designs. 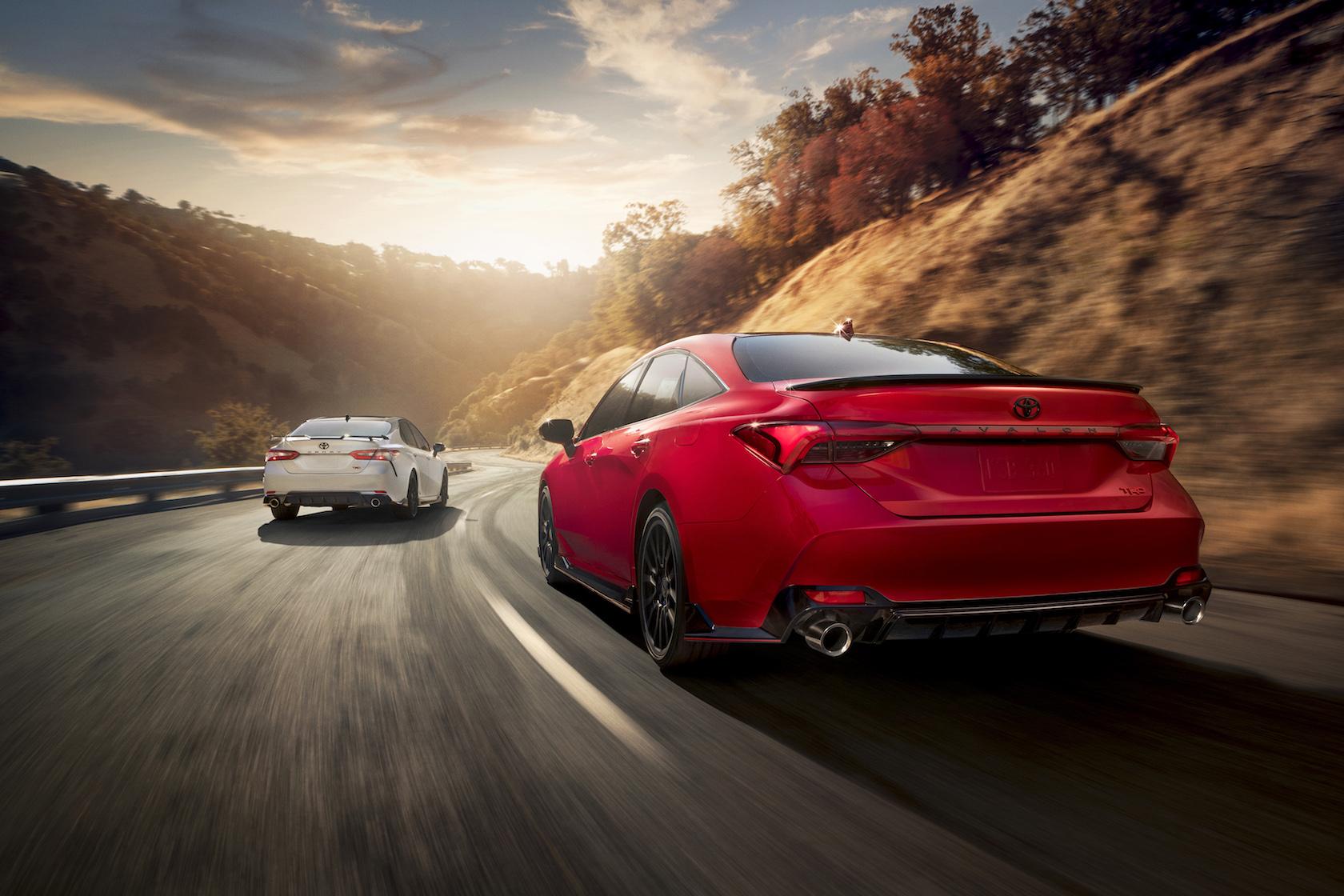 The Camry was already looking sharp after its model year 2018 redesign, and the TRD package does nothing to upset that. A gloss black front grille gets a sport mesh insert, while polished stainless steel TRD exhaust tips close out the rear. Two-toned Supersonic Red, Windchill Pearl, or Celestial Silver Metallic paint is available, or Midnight Black Metallic, and the exterior badging is finished in black. 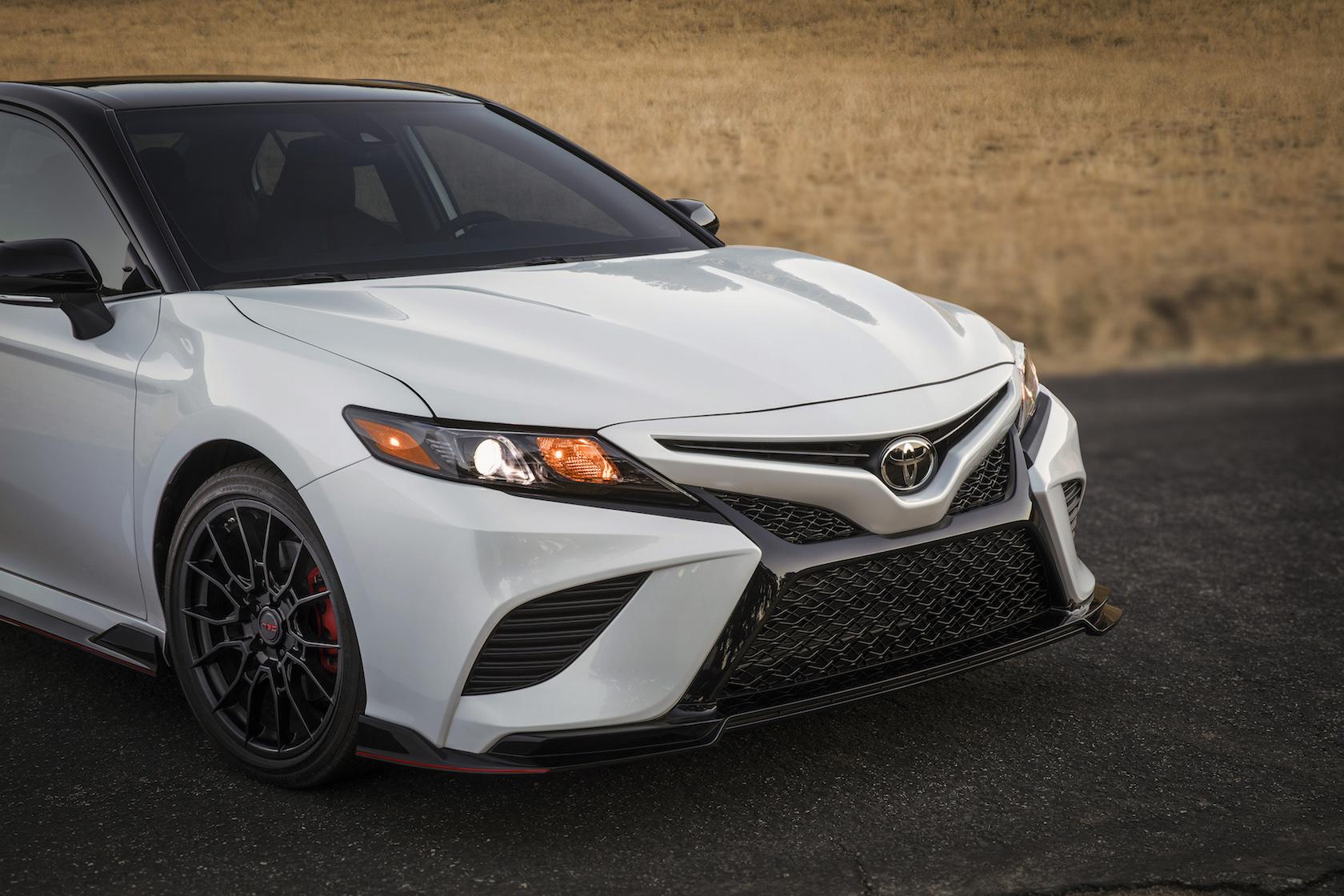 As for the wheels, they’re matte-black too, and at 19 x 8.5-inches they’re half an inch wider than the Camry XSE’s rims. Despite being bigger, though, Toyota says each wheel is actually 3.1 pounds lighter. They’re shod with Bridgestone Potenza 235/40R19 summer tires, with the promise there being better lateral grip and a swifter turn-in response. 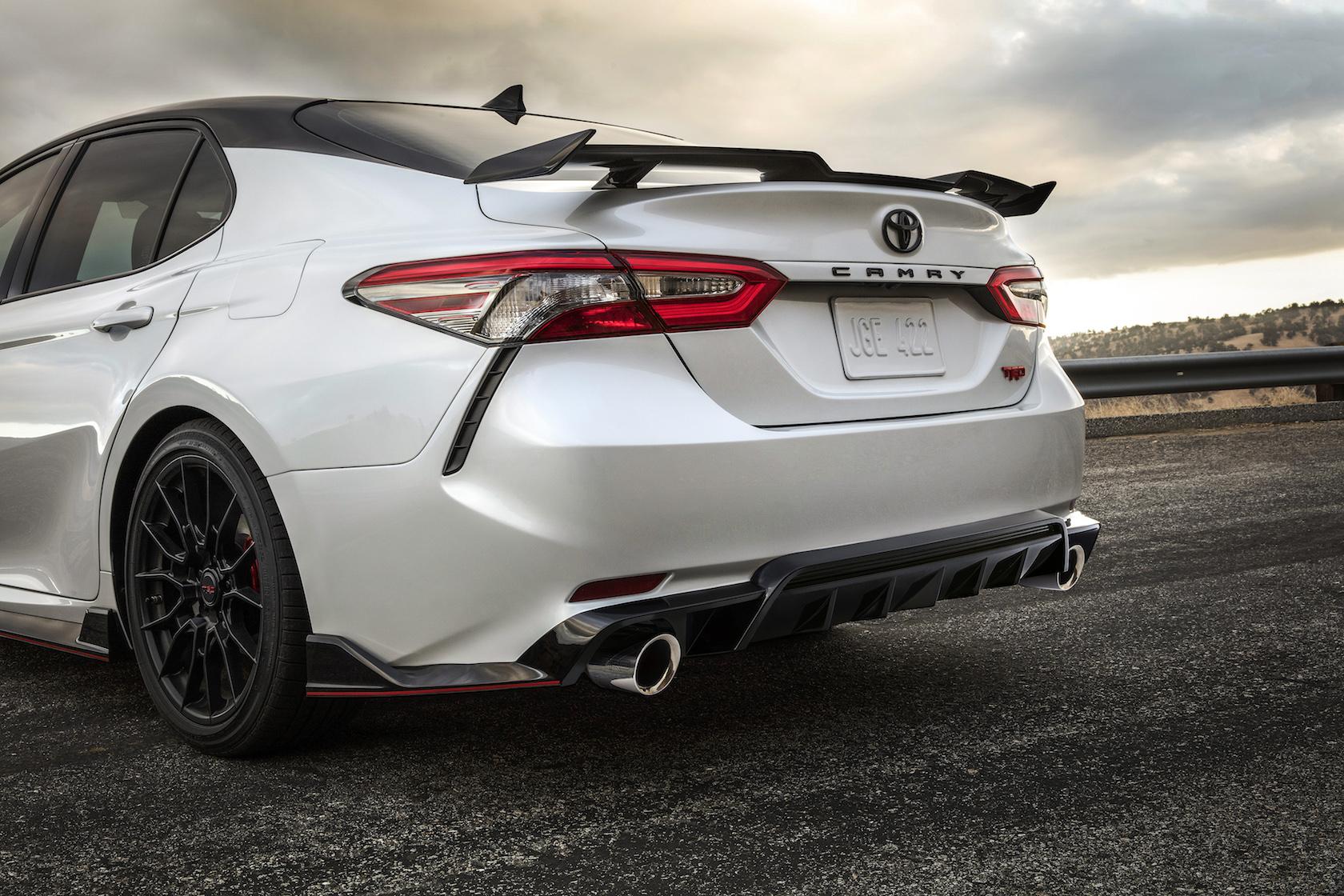 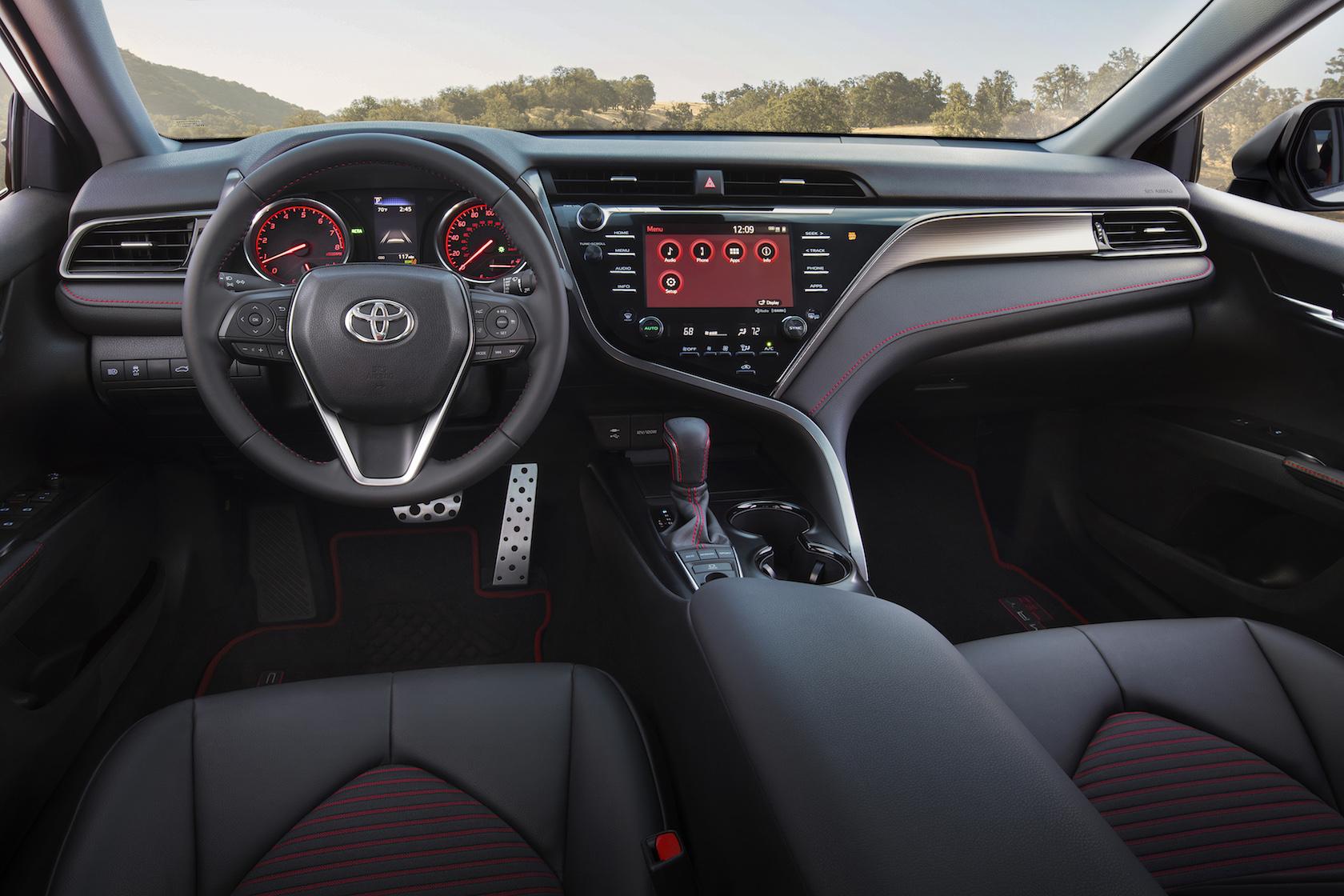 In the cabin, there are black sport SofTex trimmed front seats with fabric inserts, red accents, and red-stitched TRD embroidered headrests. More red stitching appears on the leather-wrapped steering wheel, and the seatbelts are matching red, too. The shift knob gets an embossed TRD logo, and there are matching mats.

For the 2020 Avalon TRD, matte-black 19 x 8.5-inch alloy wheels also make a big change in weight. In fact, they save 18 pounds of unsprung mass, compared to the Avalon XSE’s usual 19-inch wheels. The same TRD exhaust tips are included, and the same four color options, with red pinstriping on the aero add-ons. 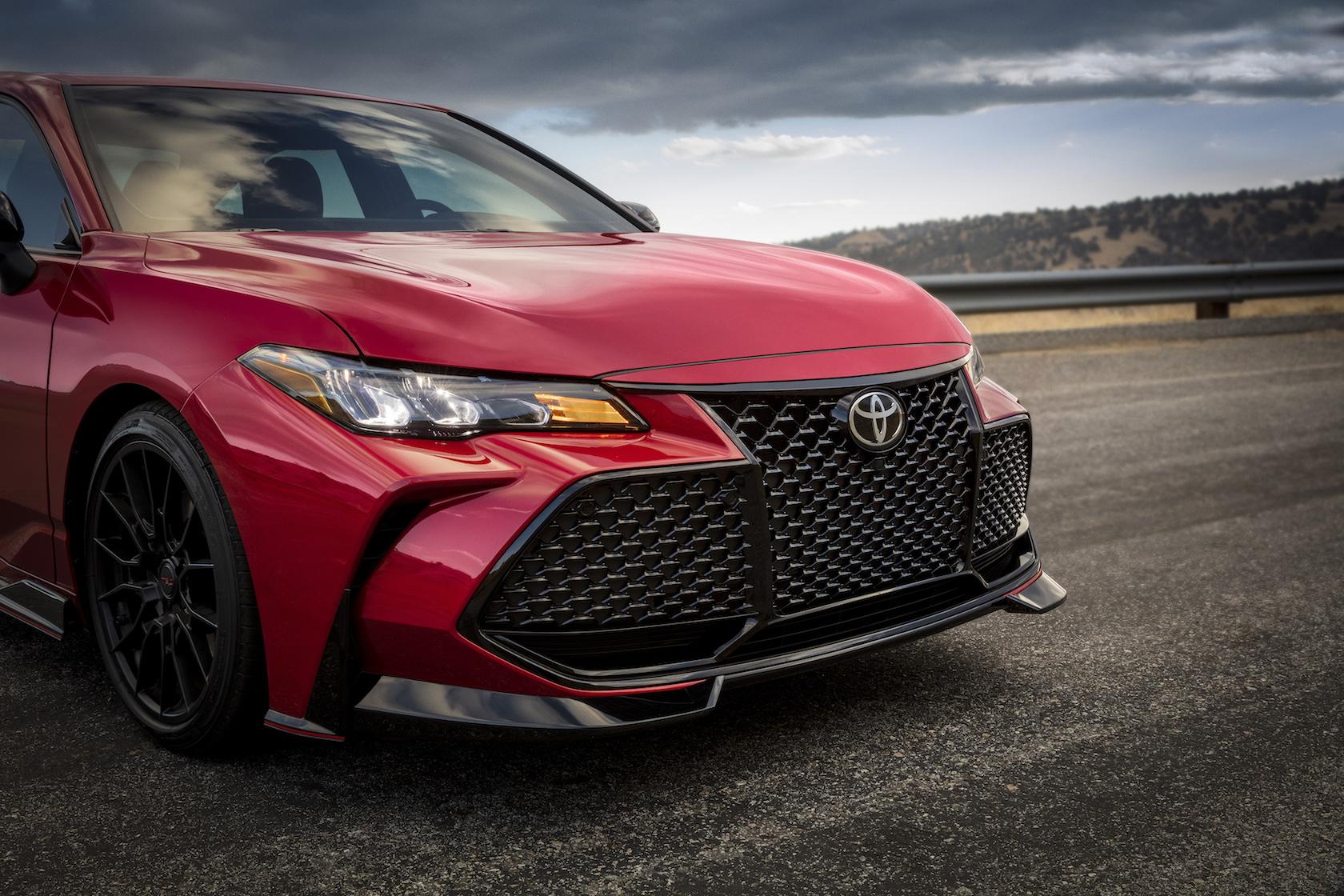 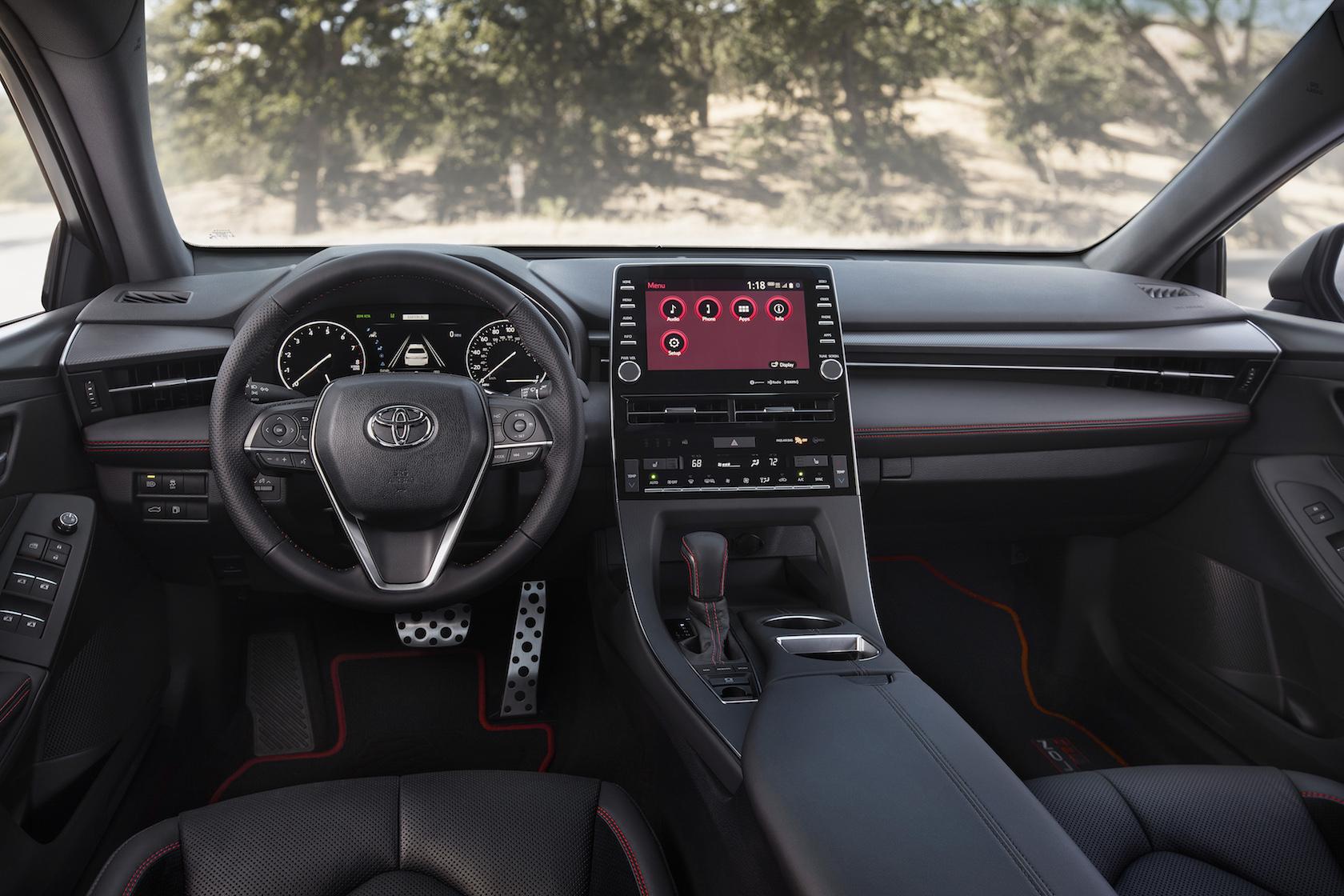 What hasn’t changed, though, is the power. Both cars get Toyota’s 3.5-liter V6 engine, which is good for 301 horsepower and 267 lb-ft of torque. That’s unchanged from the powertrain that the non-TRD versions of the cars offer, and the 8-speed automatic transmission is carried over, too.

You do, at least, get paddle-shifters, and Toyota says that it has tweaked the components around the engine, even if it itself is the same. A specially-tuned cat-back dual exhaust, for instance, should sound more aggressive than the standard car. 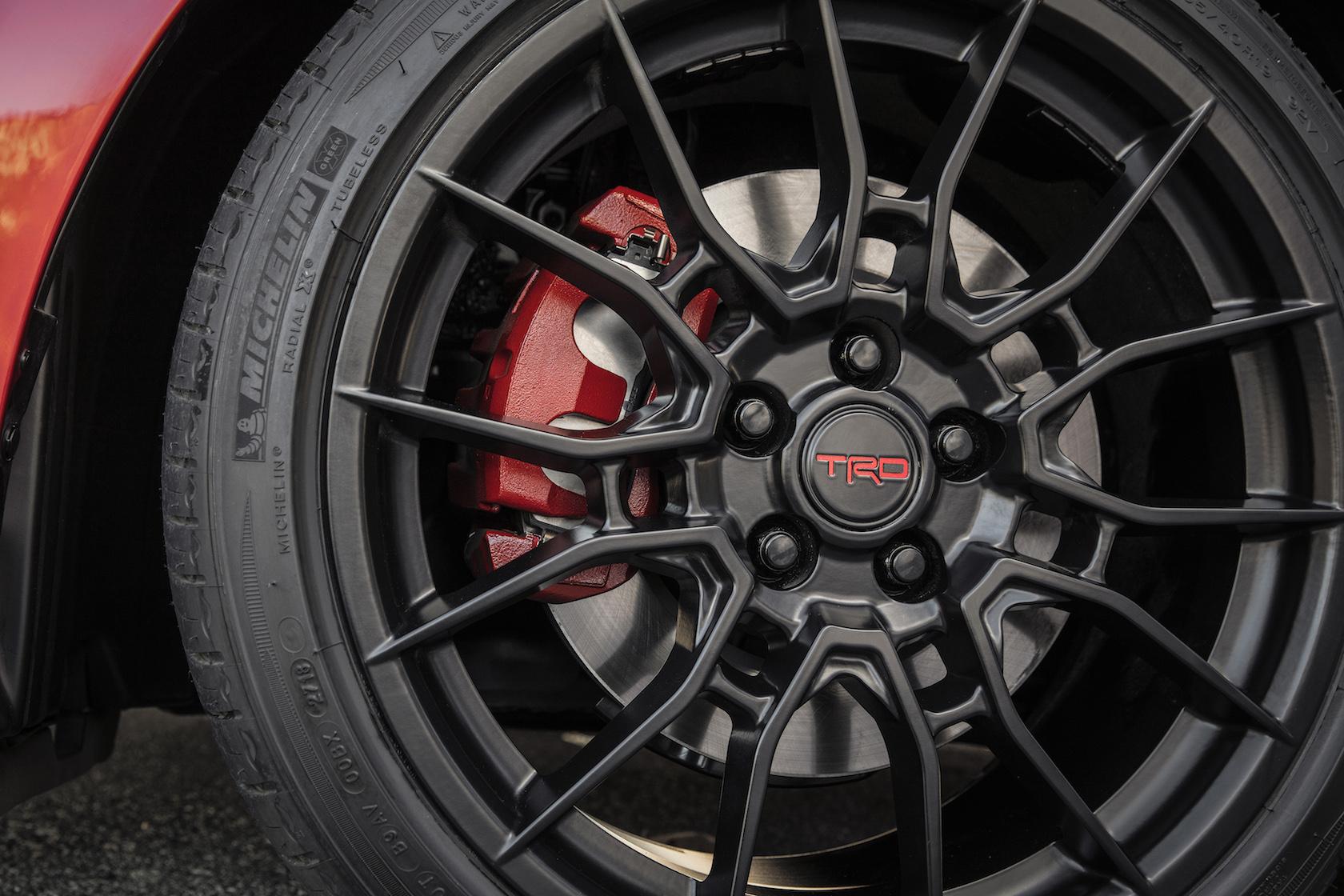 Even if speeding up isn’t faster, slowing should be. The 12.9-inch rotor front brakes are almost an inch larger than the standard brakes on the regular XSE grade cars, and double up to dual-piston calipers. TRD revamped the brake performance, too, for more direct feedback.

Toyota Safety Sense-P – which includes pre-collision braking and other driver assistance tech – will be standard on both cars. The body kits include a new front splitter, side aero skirts, a trunk lid spoiler, and rear diffuser.