Not for nothing did the Porsche 911 earn a reputation for being frisky on wet roads, and though all-wheel drive has helped there, the automaker has something even cleverer for the 2020 911. Porsche Wet Mode is a brand new technology on the eight-generation 911, an assistance system which helps with wet road traction without sacrificing power in the process.

Instead, it uses tweaks to the Porsche Stability Management (PSM) and Porsche Traction Management (PTM) systems, preconditioning them both. That means they’ll be ready should the 911 lose grip on a wet surface, and step in earlier – and more sensitively, Porsche says – than ordinarily.

What’s particularly clever, though, is how the 911 spots those conditions. Rather than waiting for the first sign of lost traction, Porsche uses acoustic sensors in the front wheel housing. These can detect swirled-up spray water, including standing water even after a rain shower has ceased, but which could still present a risk of aquaplaning.

Just tracking that water on the road is enough for the 911 to pre-warn the PSM and PTM systems. However it also triggers a notification in the driver’s instrumentation, right next to the rev counter on the car’s new part-digital display. That recommends manually switching to Wet Mode, which can be done either through the button on the center console – redesigned significantly for this eight-generation car, so as to make it less control-heavy – or using the mode switch on the steering wheel in 911’s with the Sport Chrono Package option.

Wet Mode makes more fundamental changes to the 911’s handling. As well as adjusting the PSM and PTM settings, the active aerodynamics, optional Porsche Torque Vectoring (PTV) Plus, and general responsiveness of the car are all adjusted.

From around 56 mph, for instance, the variable rear spoiler shifts to the extended “performance” position, while the cooling air flaps open and the accelerator pedal characters gets flatter. PSM Off and Sport mode are locked out, while the torque build-up of the engine is remapped so as to be smoother. Similar changes are made to how the new eight-speed PDK transmission changes gears. 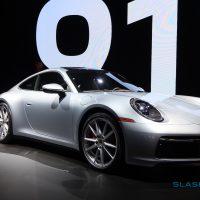 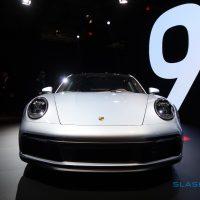 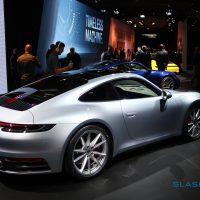 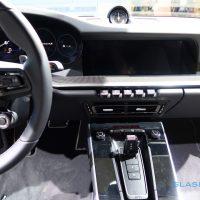 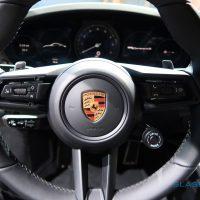 While you might think this would primarily be of use for the rear-wheel drive 2020 911, Wet Mode makes changes to the 911 Carrera 4S, too. It pushes more power to the front axle than usual, helping with stabilization. The electronically controlled rear differential lock also gets reduced locking ratios.

Those various small tweaks all come together for a noticeable change in how the 911 feels to drive in the wet, Porsche says. More confident handling, a better ability to adapt to sudden changes in road surface – with different coefficients of friction – and a more sure-footed application of power. Indeed, the automaker also recommends it be manually activated when drivers face snow, as its benefits are just as valuable there.