Porsche has announced that the latest generation of the venerable 911 sports car can be ordered with a SportDesign package. The package brings to the 911 a revised front apron with a spoiler lip. The rear is redone with a new bumper section that has a raised number plate. The number plate incorporates a new air intake and outtake.

The aero enhancements in the Aerokit include a front spoiler, fixed rear spoiler, and fixed rear wing. Porsche says that the parts remind of Porsche GT vehicles. Combining the SportDesign side skirts with the Aerokit gives the car a “ground hugging stance” that underlines the 911 racing DNA according to Porsche.

The Aerokit was designed at the Porsche development center in Weissach. The automaker says that experts spent months optimizing the design and function of the Aerokit. Wind tunnel testing helped to optimize the performance and reduce uplift forces over the front and rear axle. 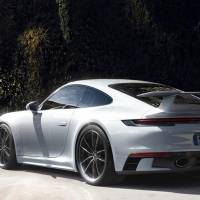 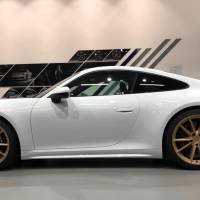 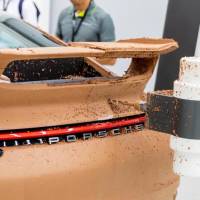 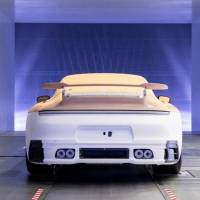 The development phase for the kit was intensive with more than 90,000 on-road endurance kilometers including hot and cold climates. Aerokit and the SportDesign package are available in exterior color or partially in gloss black and can be ordered now. Aerokit costs $6,910 with pricing for the Sport Design skirts unknown. New cars can be ordered with these packages now, they will be offered as a retrofit kit this summer for existing vehicles.