Appearances can be deceiving, though the 2020 Mercedes-AMG GT C Roadster seems an unlikely car to illustrate the truism. Middle-child of the AMG GT line-up, it’s short of neither power nor personality, and you’d be forgiven for assuming a 550 horsepower rear-wheel drive convertible would be a handful. Sure enough it’s a head-turner, but there’s more here than meets the eye.

The matte-finish Designo Brilliant Blue Magno paintwork – a worthy $3,950 option – doesn’t exactly scream subtle, but it’s not like anybody was going to miss the AMG GT C Roadster in the first place. Priapically proportioned, its long and sculpted hood, slung-back cabin, and muscular arches have a mesmeric impact on pedestrians and fellow motorists alike. 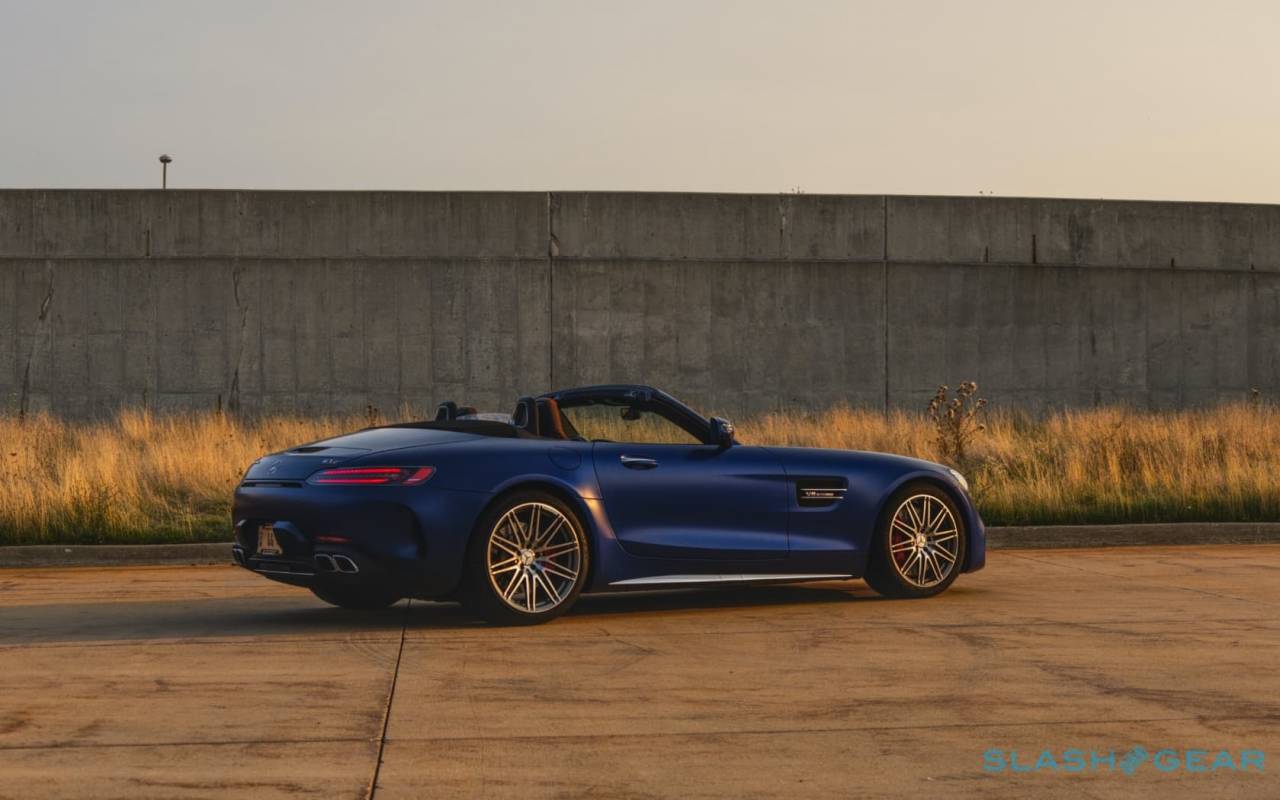 The 2020 model year tweaked the lights and swapped out the rear diffuser, among a handful of small changes, but the overall impact is the same. From the gaping maw back to the pinched rump it’s a triumph; only the slightly awkward pop-out rear spoiler feels a little jarring. Happily it retracts automatically when you turn the engine off, so that by the time you inevitably glance back at the Roadster as you walk away its curves are uninterrupted. 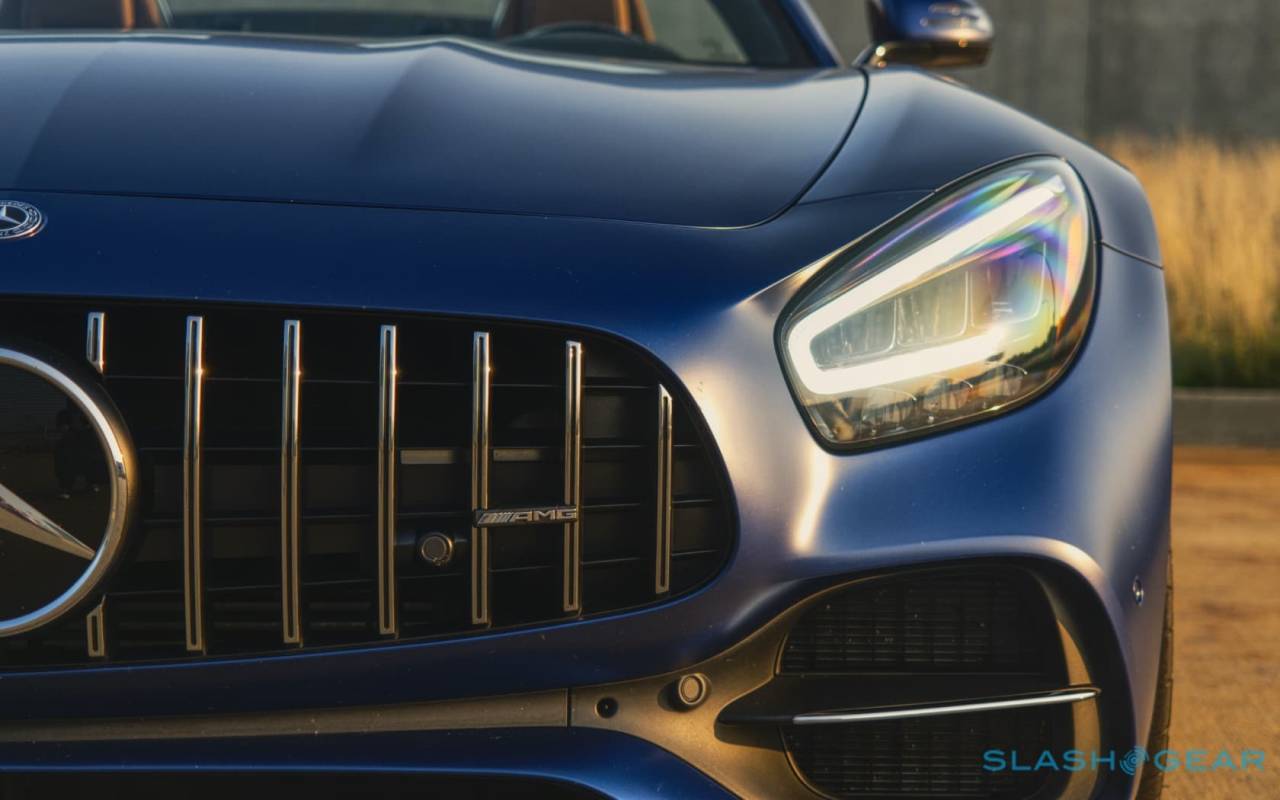 Inside has seen some minor changes, too, most notably a 12.3-inch fully-digital display for the driver’s instrumentation, and a 10.2-inch infotainment display. It’s a snug cockpit, doing nothing to distract you from that feeling of being mere inches above the asphalt, but a comfortable one with it. The high center console and meaty wheel press in on you, wrapping you up in that sense of AMG occasion. 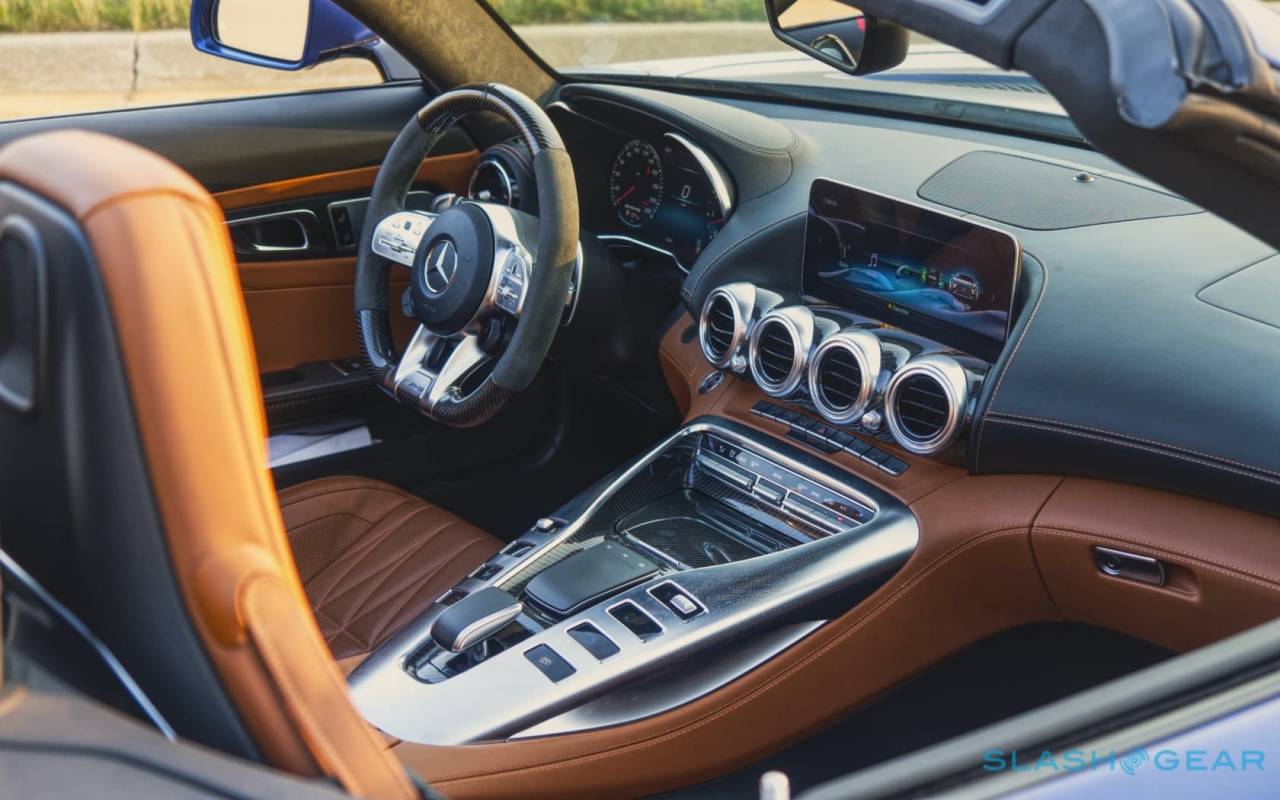 In this case, the occasion is enjoying a 4.0-liter twin-turbo V8 engine, handcrafted and delivering 550 horsepower and 502 lb-ft of torque. All of that gets pushed to the rear wheels via an AMG 7-speed transmission.

There’s tech, and plenty of it. Rear-wheel steering to sharpen the cornering; AMG Adaptive Sport Suspension with front and rear forged dual wishbones; an electronic limited-slip differential; and AMG DYNAMIC SELECT with that all-important Race Mode. High-performance composite brakes promise to shed speed as rapidly as the AMG GT C Roadster can build it. 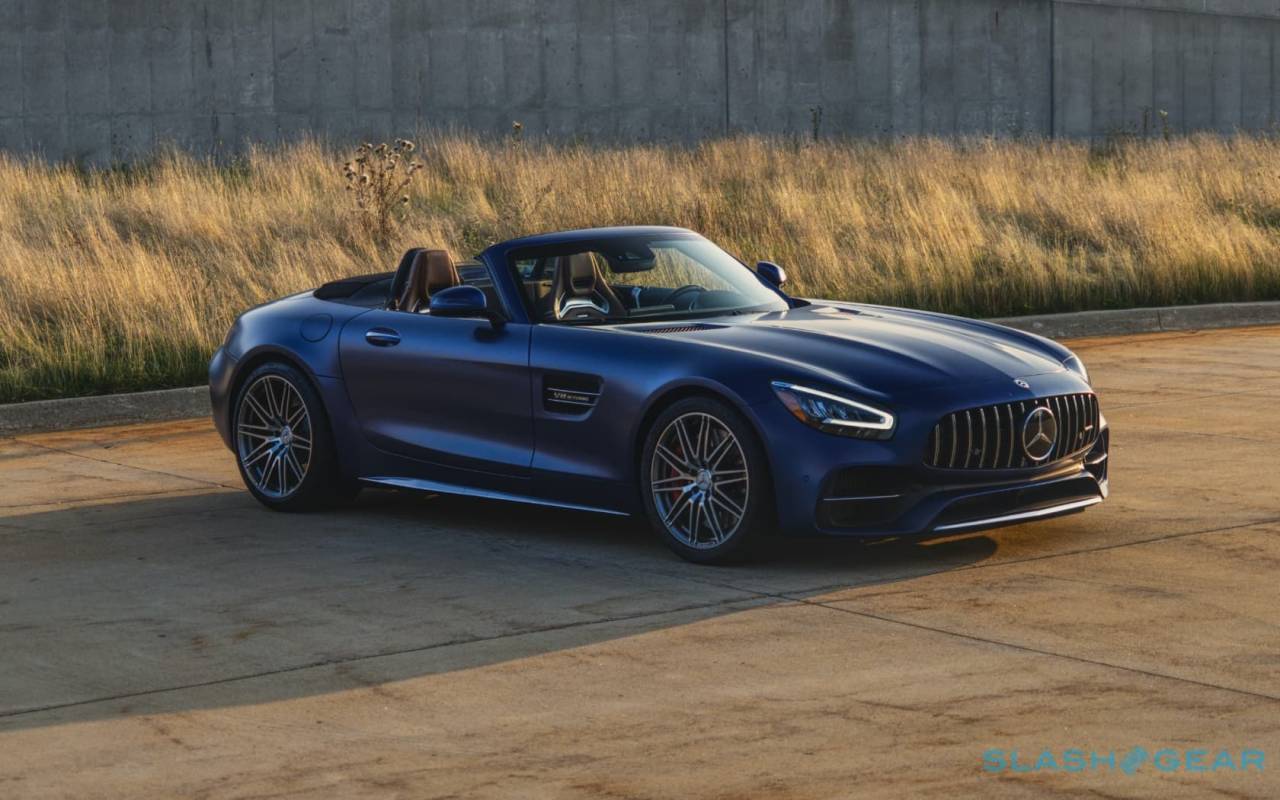 It could, in the wrong hands, have left the droptop feeling like a science experiment not a sports car. Happily AMG’s gadgetry applies only the lightest of touches, offering up the visceral performance rather than overruling it.

And make no mistake, this is a fast car. 0-60 mph arrives in 3.6 seconds, while top speed is 196 mph. Notch the oddly-positioned transmission lever into drive and risk burying your right foot, and the GT surges forward with equal parts menace and elation. Even in Comfort mode, which softens the trick suspension just enough, the power is barely restrained. Click over into Sport or Sport+ with the dinky dashboard knob and mayhem is gleefully close at hand. 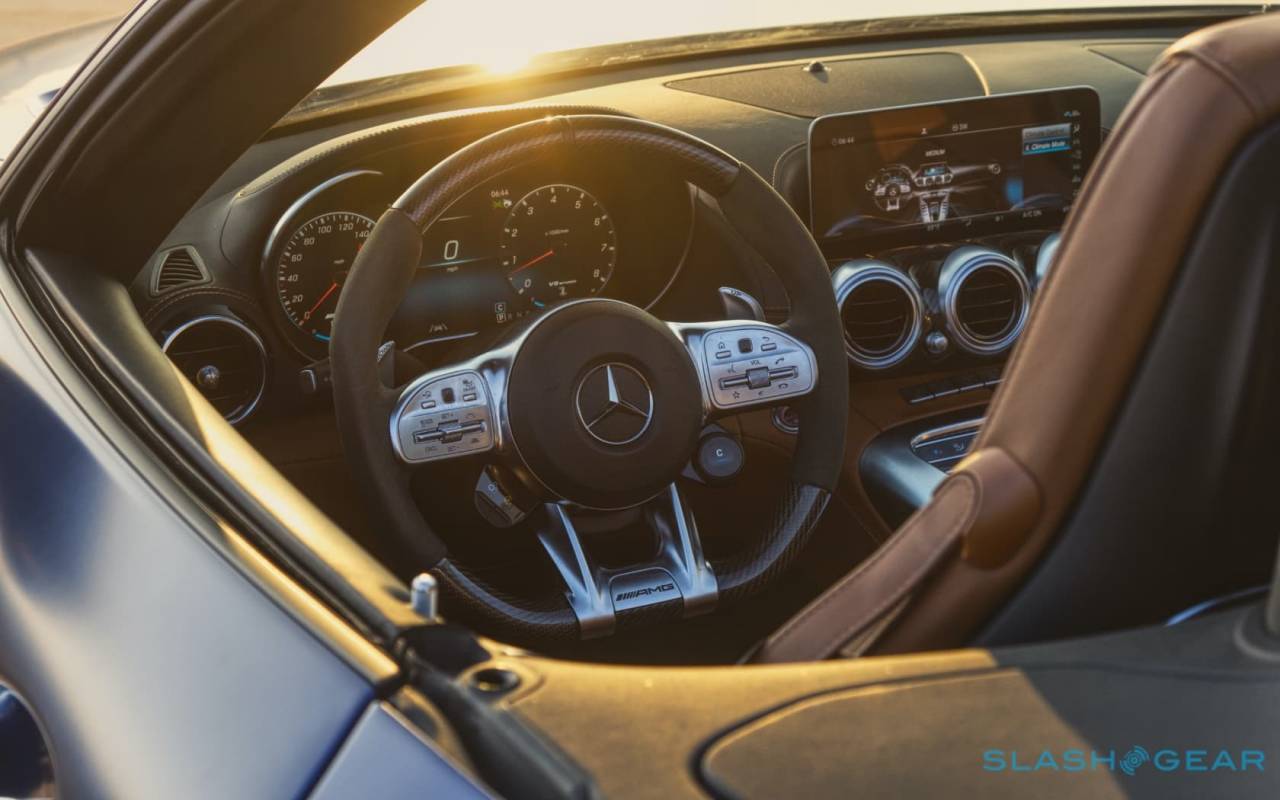 You can clack your own paddle-shifts, but the AMG transmission is more than smart enough to be left to its own devices. That doesn’t just mean it rewards eager driving, either. Yes, the GT loves being pushed, and its appetite for downshifting as you brake last-minute for tight corners is a bonafide joy, but it’ll dawdle in traffic too. We’re not talking S-Class slush, no, but where some performance cars make their low-speed frustration clear with jerks and jolts, the AMG has a little more patience for it all. 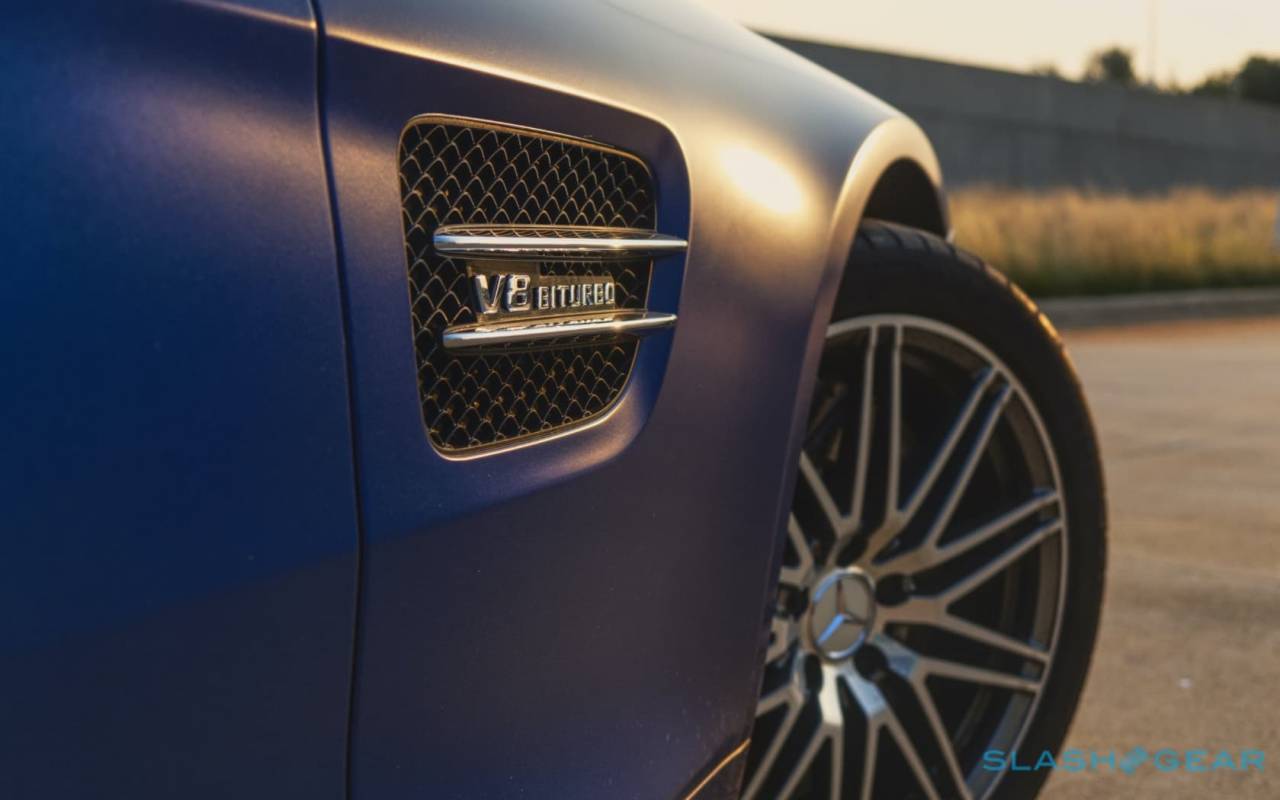 Each moment there, though, watching the fuel gage tick down – Mercedes says to expect 17 mpg combined, though that seems… ambitious – is a sour reminder that you’re not having fun. The GT C Roadster makes fast driving feel easy, a beautiful balance of weight in the wheel, responsive steering, and all that power making the most of any road, whether kinked or straight. Controls in the center console allow you to futz with the drive modes’ minutiae too, softening the suspension on shoddy paving while leaving the rest of the settings dialed up to “furious and loud with it.” 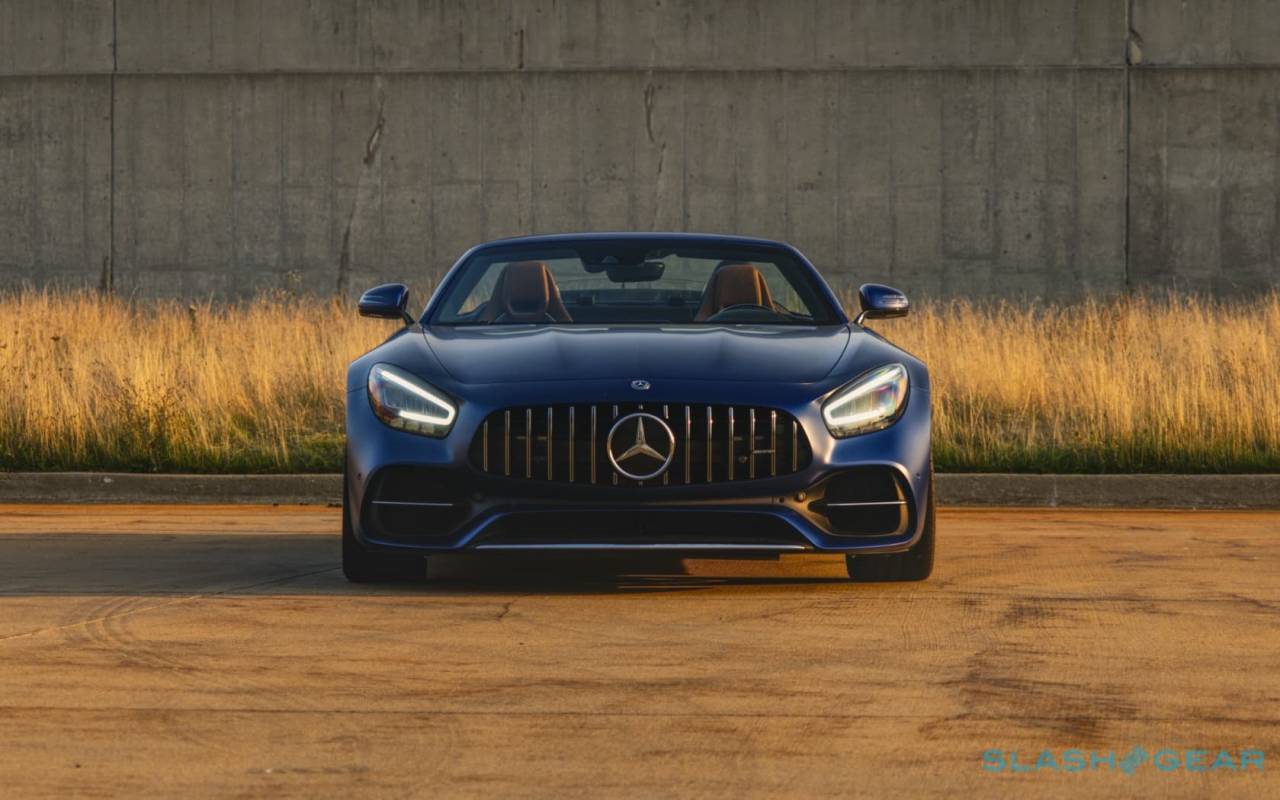 I expected, electronics notwithstanding, the rear to be a handful. In fact the combination of vast Michelin Pilot Super Sport tires, the limited-slip differential, and AMG’s playful programming will let it just loose enough to be fun, without the risk of you messing up the saddle brown leather seats.

As for more pedestrian matters, there’s both lane-keeping assistance and blind-spot warnings as standard, while the 5.8 cu-ft trunk is fairly laughable. The GT misses out on Mercedes’ newest MBUX infotainment system, too, which is a shame, but you do get both Apple CarPlay and Android Auto. The heated and ventilated AMG Performance seats are comfortable and supportive, the power roof drops in about 12 seconds at speeds of up to 38 mph, and when the top is down the Airscarf nuzzles your nape with warm air. 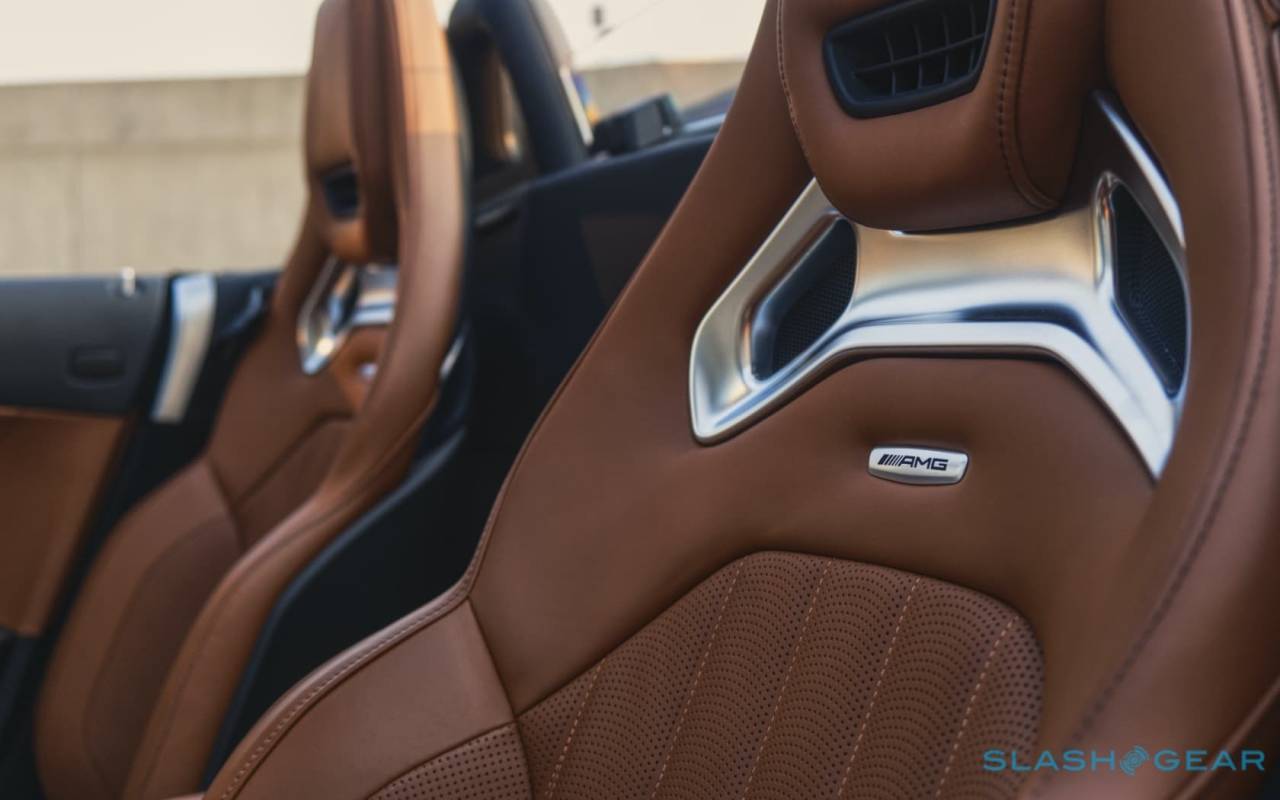 The AMG GT C Roadster may be the middle-child of its series, but that doesn’t make it cheap. Pricing kicks off at $162,400 (plus $1,995 for destination and the gas guzzler tax). Standard equipment is strong, but by the time the matte blue paint-job, exterior carbon fiber trim, Burmester audio system, performance steering wheel, fetching AMG wheels, and Active Distance Assist DISTRONIC are added, you’re at just shy of $180k.

That, it’s worth noting, puts you within $10k’s distance of the AMG GT R Roadster. Tuned for 577 hp and 516 lb-ft, the flagship drop-top trims its 0-60 time to 3.5 seconds and takes more inspiration from its race car cousins. It also has a more extreme styling package, including a sizable fixed rear spoiler. 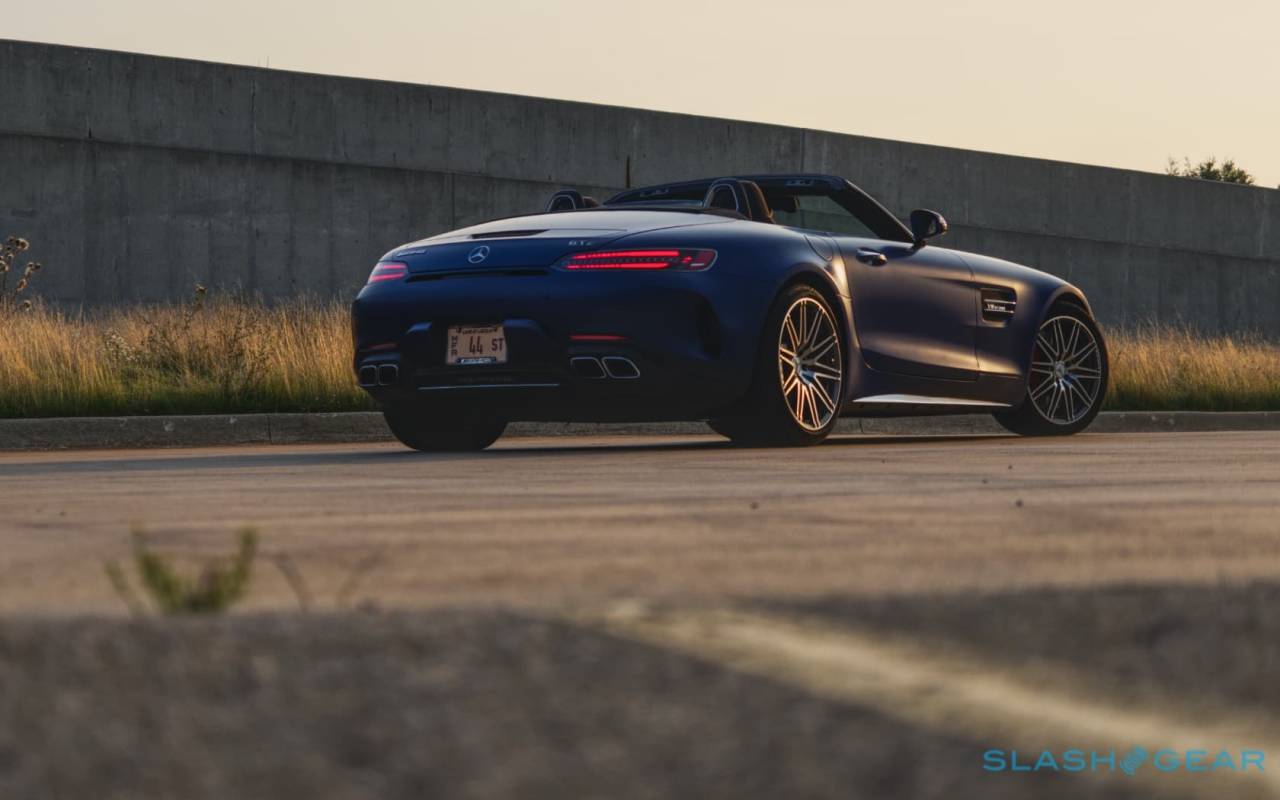 Personally, I think I’d be happier with the AMG GT C Roadster – or, for that matter, its Coupe variant – which feels a little more suited to the everyday.

Where some performance cars apparently believe that terrifying you is part and parcel of the sports experience, you don’t need to end up with sweaty underarms (or worse) to be enjoying the GT. It flatters you when the roads are ripe for eager driving, but is also perfectly happy to go pick up takeout, too. If you’re looking for a charismatic alternative to Porsche’s 911, you’ve found it.