Chevrolet has no shortage of different 2020 Silverado variants, but having spent time with two of the more unusual models, it’s clear that you feel the pickup’s charm most out on the fringes. On the one hand, the Silverado 1500 Duramax attempts to make diesel power more palatable with a focus on smoothness, while on the other the Silverado 1500 Custom Trail Boss cuts the cosseting for a very good reason. Read on for why both are worthy of your consideration.

Diesel still has a reputation, but it’s one the 2020 Silverado with its Duramax inline-six is aiming to overturn. On the one hand, there’s what diesel has long promised: oodles of torque, in this case 460 lb-ft to go with the 277 horsepower. On the other, though, there’s the claim of atypical smoothness, hardly something we’d traditionally associate with a turbodiesel. 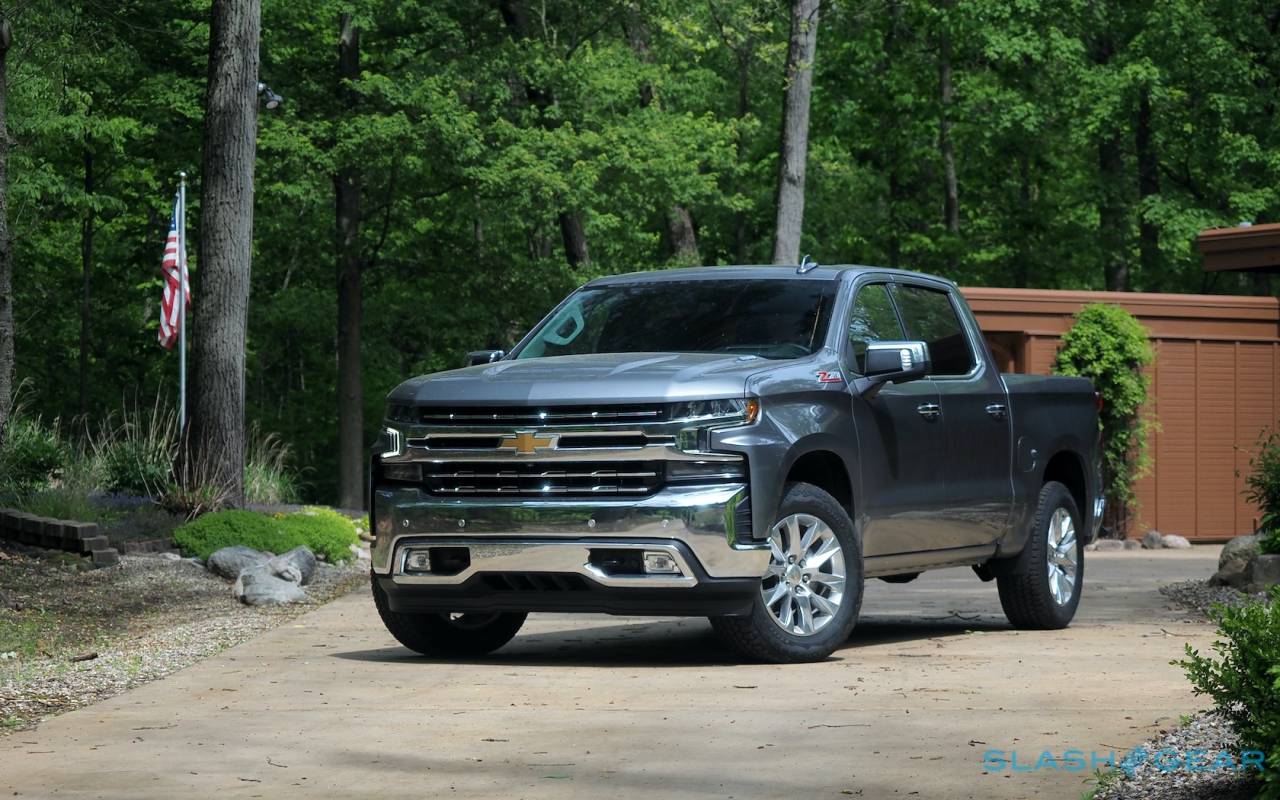 Chevrolet does that by equipping the 10-speed automatic with a mass-damper torque converter, among other finessing, and it pays dividends. I expected rattle and ill-tempered idling, but instead I got smoothness and almost-quiet confidence while cruising. The low-end torque is a particular delight, easy to control and helping belie the truck’s weight. 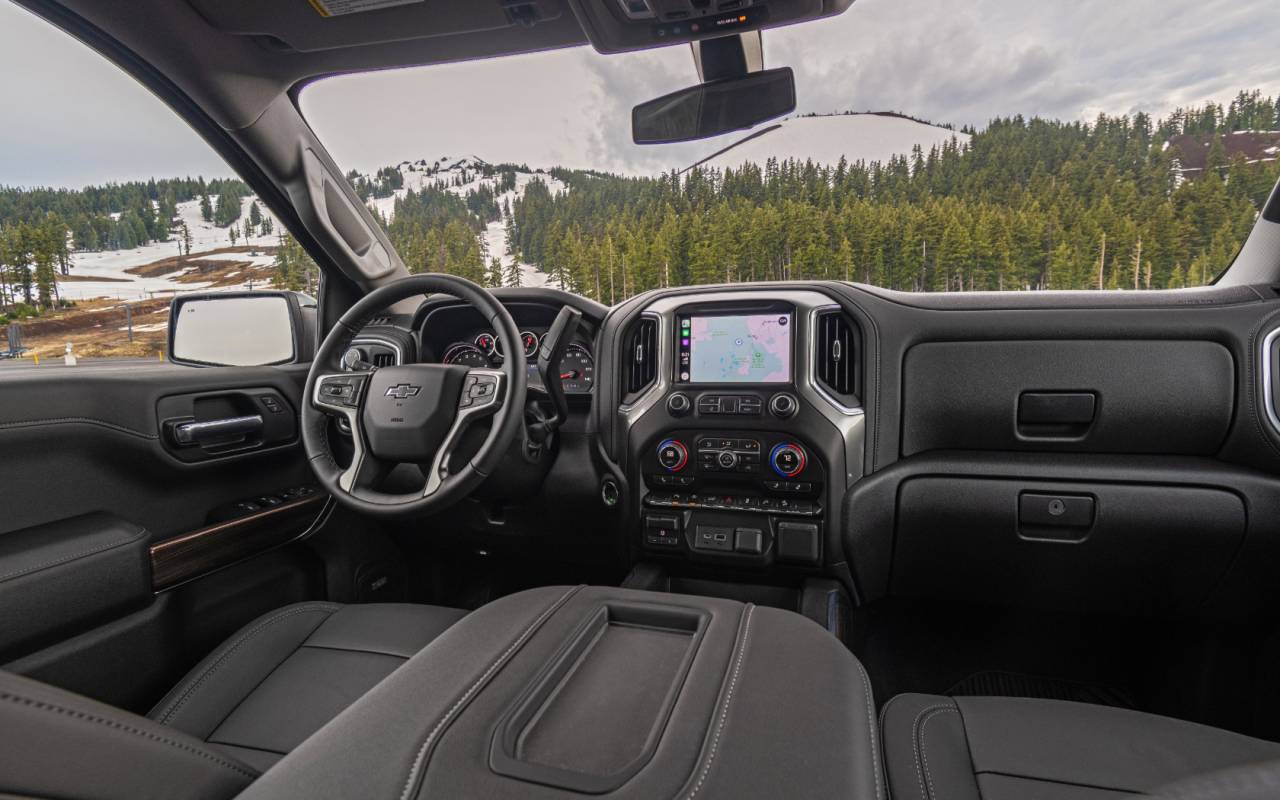 Unfortunately ride quality overall is a challenge, with plenty of bumps making their way through the suspension and into the cabin. I’m not super-convinced by Chevy’s showing there, either. Considering that this is, with options and destination, a $61,720 pickup, the 8-inch touchscreen is small and the plastics and general design aren’t up to what you find in rival trucks. 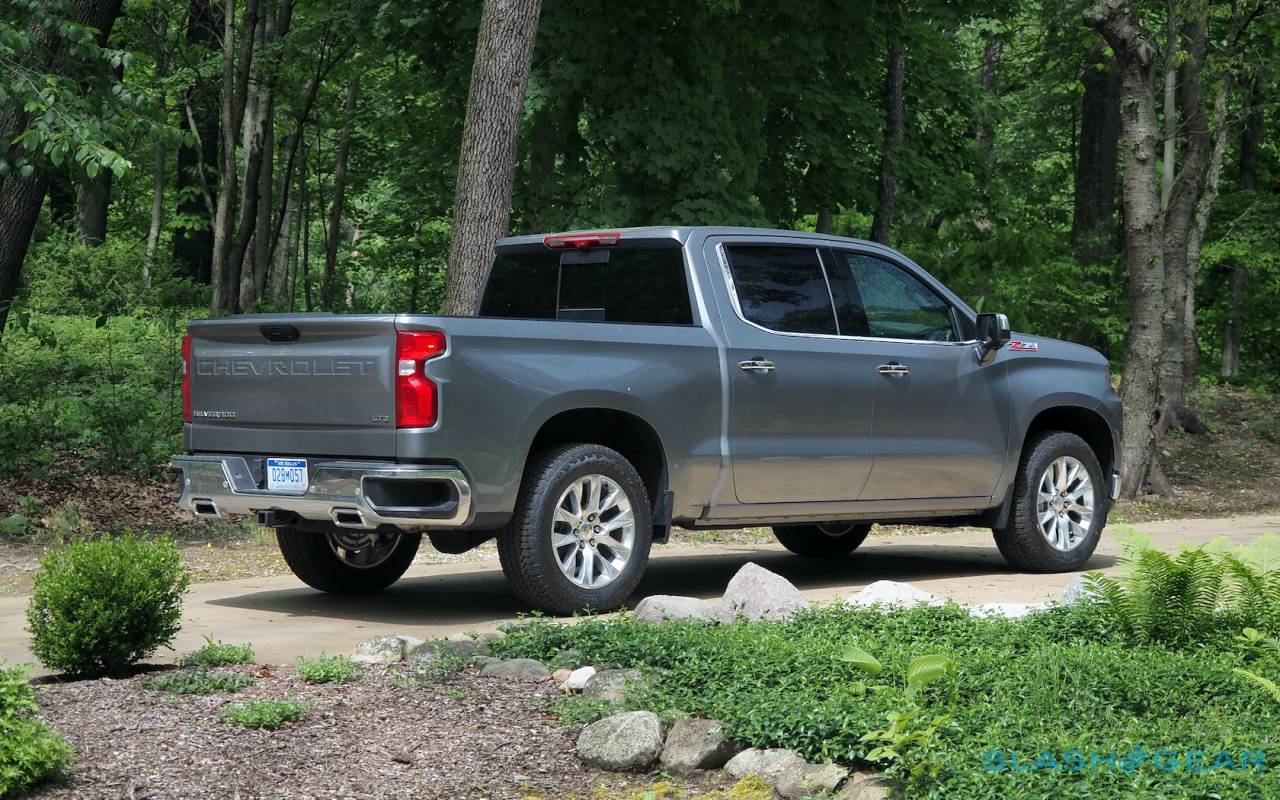 The Technology Package, meanwhile, adds 360-degree cameras, a rear camera mirror and bed-view camera, head-up display, and an 8-inch driver display. Not bad, though I do think Chevrolet should be making more of its active safety tech standard. 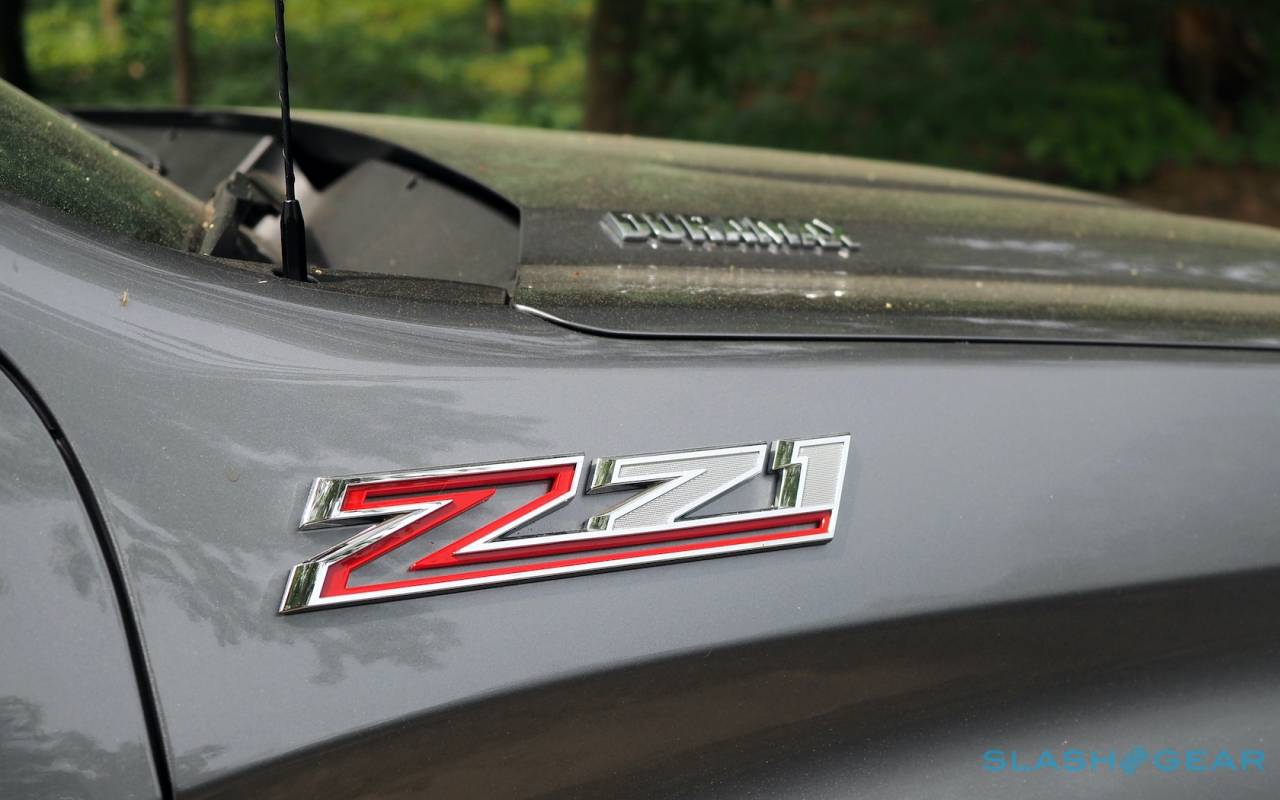 On the road, highway cruising is an unexpected success. The Silverado’s seats are well-padded and comfortable, and a reasonable right foot can maximize your more-expensive diesel. The EPA says you’ll get 23 mpg in the city, 29 mpg on the highway, and 25 mpg combined for the 4WD truck, making it the pick of the Silverado bunch for those who want the best economy ratings. 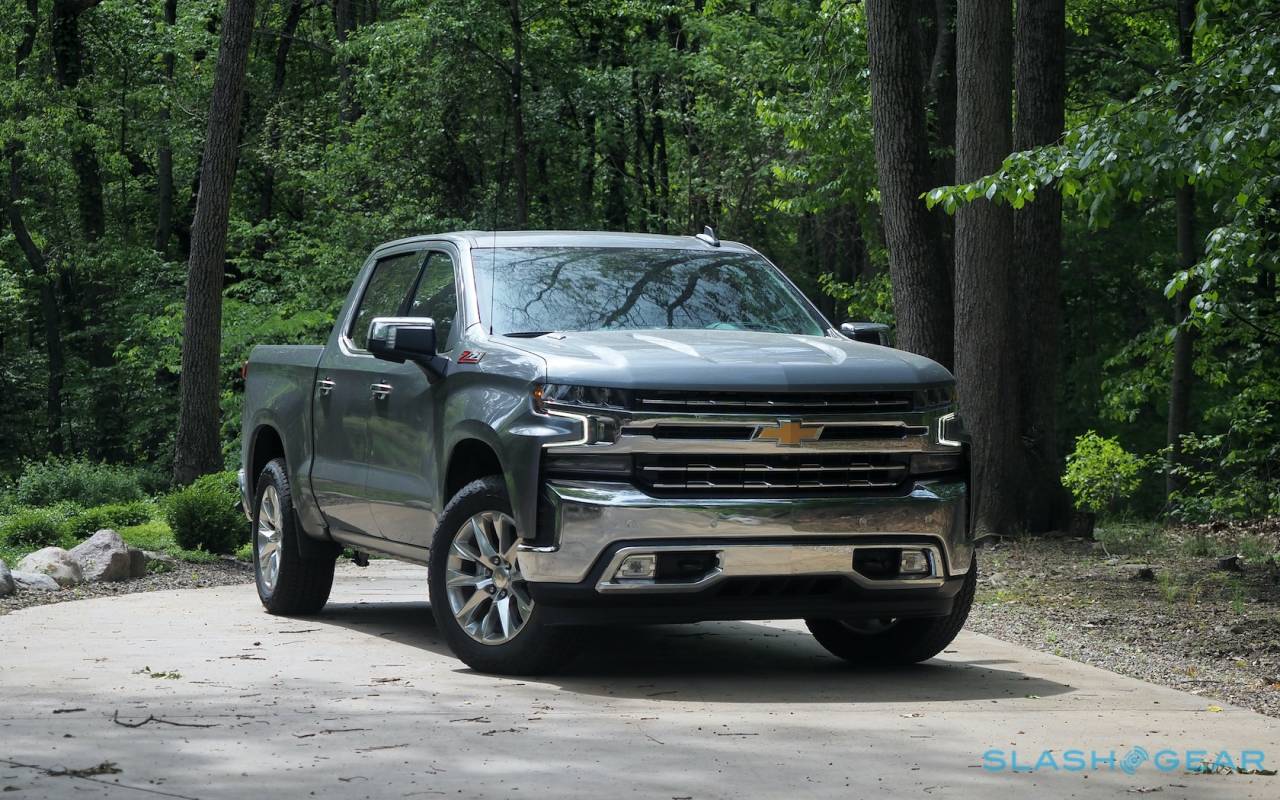 There are still some compromises, mind. 9,300 pounds of tow rating is only okay; well short of the 13,400 pounds its 6.2-liter V8 is maximum rated for. It’s also underwhelming compared to the competition, with Ford and Ram’s light-duty diesels both out-towing it.

Nonetheless, there’s a lot to like about this turbodiesel. The low-end torque suits the Silverado’s personality on the road, and while the sticker price and fuel are comparatively high, running costs could help offset that for those aiming to keep the Duramax around for a while. 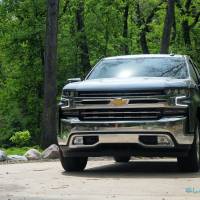 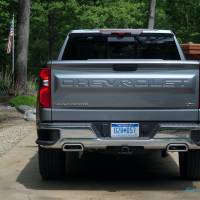 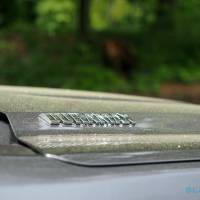 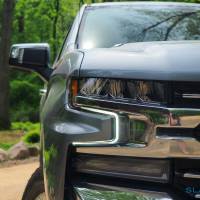 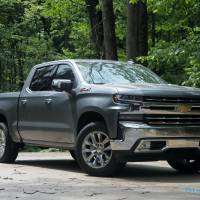 At first glance, you’d be forgiven for thinking that the Silverado 1500 Custom Trail Boss was a fairly calculated way to brand a base-spec pickup. According to Chevrolet, though, that’s not quite the case. Yes, at $43,715 (plus $1,595 destination) it’s among the cheapest ways to put a big-engine Silverado on your driveway, but it’s also as much about what was intentionally left out as what was included. 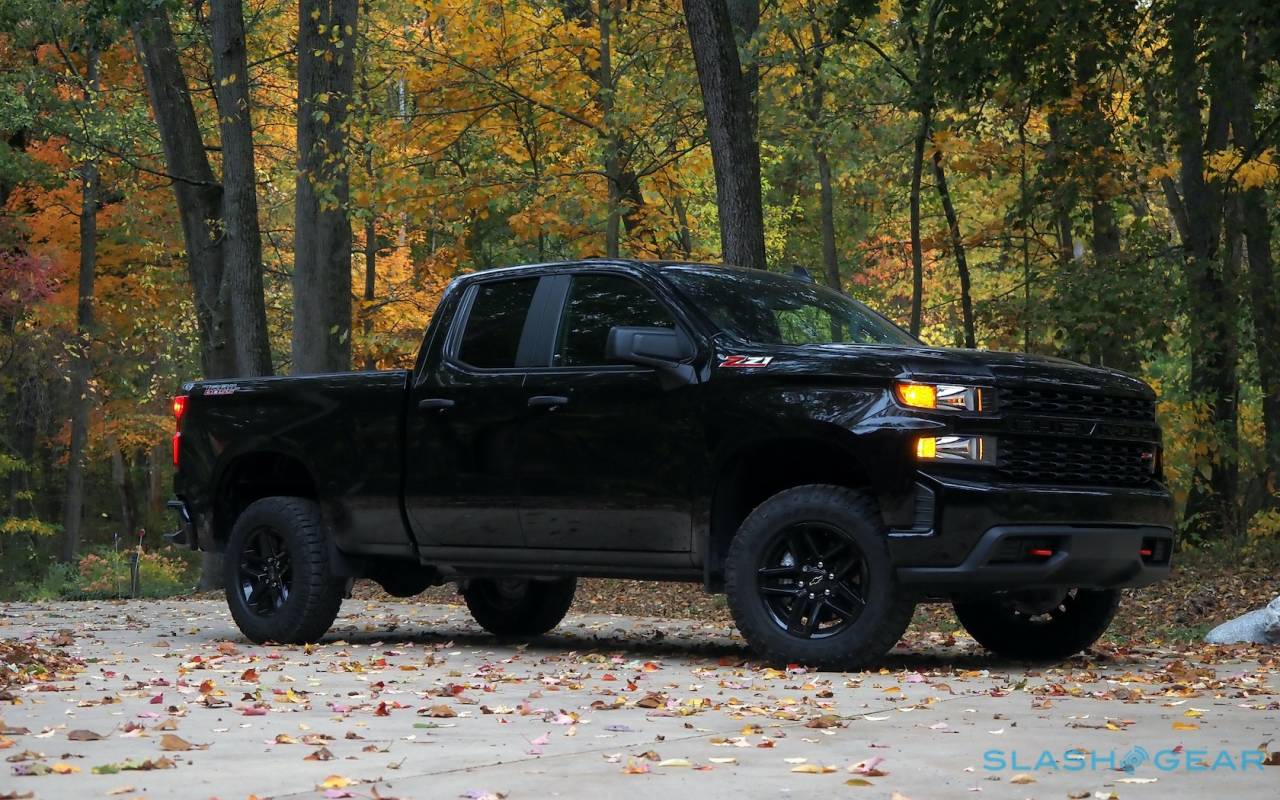 If you’re coming to it from, say, a Silverado Crew LTZ, for instance, the bare-bones equipment list may take you back. Chevy’s argument is that sufficient pickup drivers were buying its 6.2-liter V8 trucks only to switch out what was there with custom alternatives, that giving them a ready-pared-back option made much more sense. 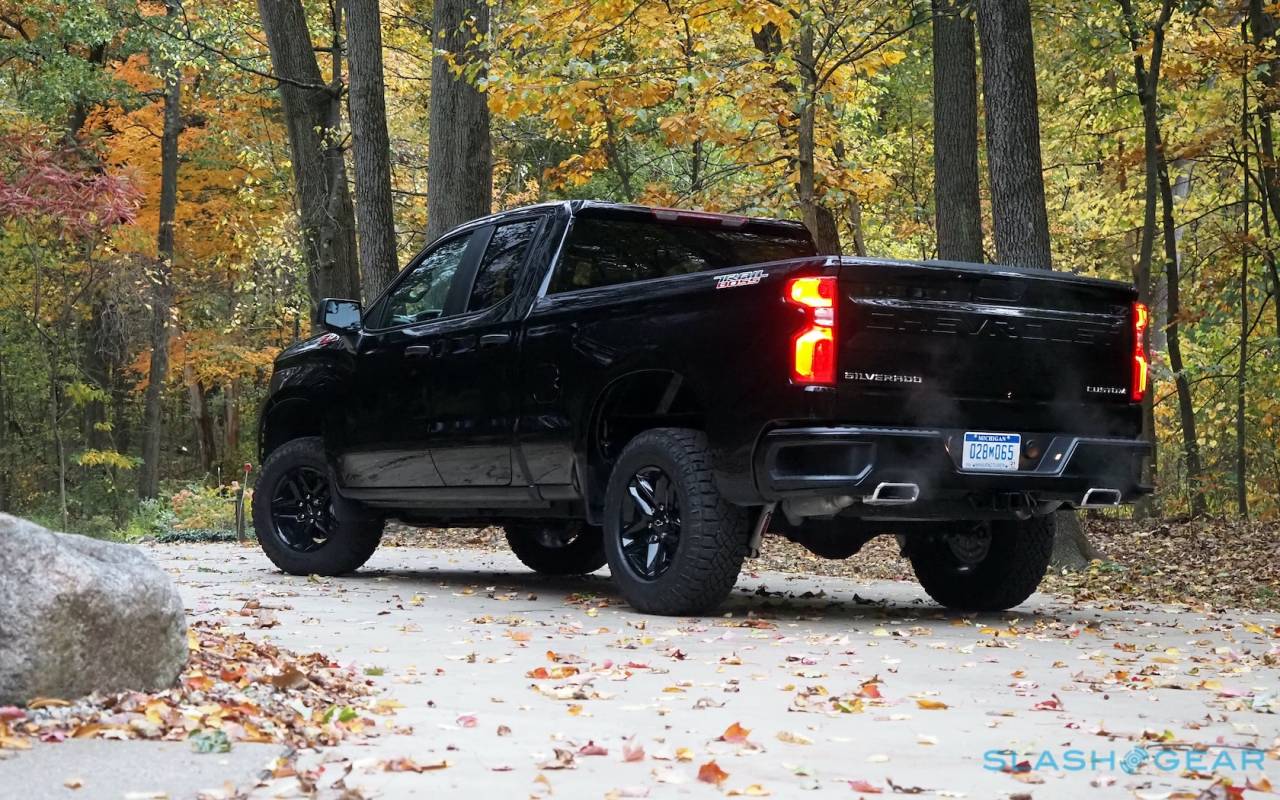 You could think of it as the truck equivalent of a bare-bones PC. The Custom Trail Boss has the beefy V8 and 10-speed transmission, an auto-locking rear differential and Autotrack 2-speed transfer case, and the Z71 Off-Road package with 2-inch lift, monotube shocks, and skid plates. If you want to trick out the exterior or the cabin, though, it’s as close to a blank canvas as you’ll get. 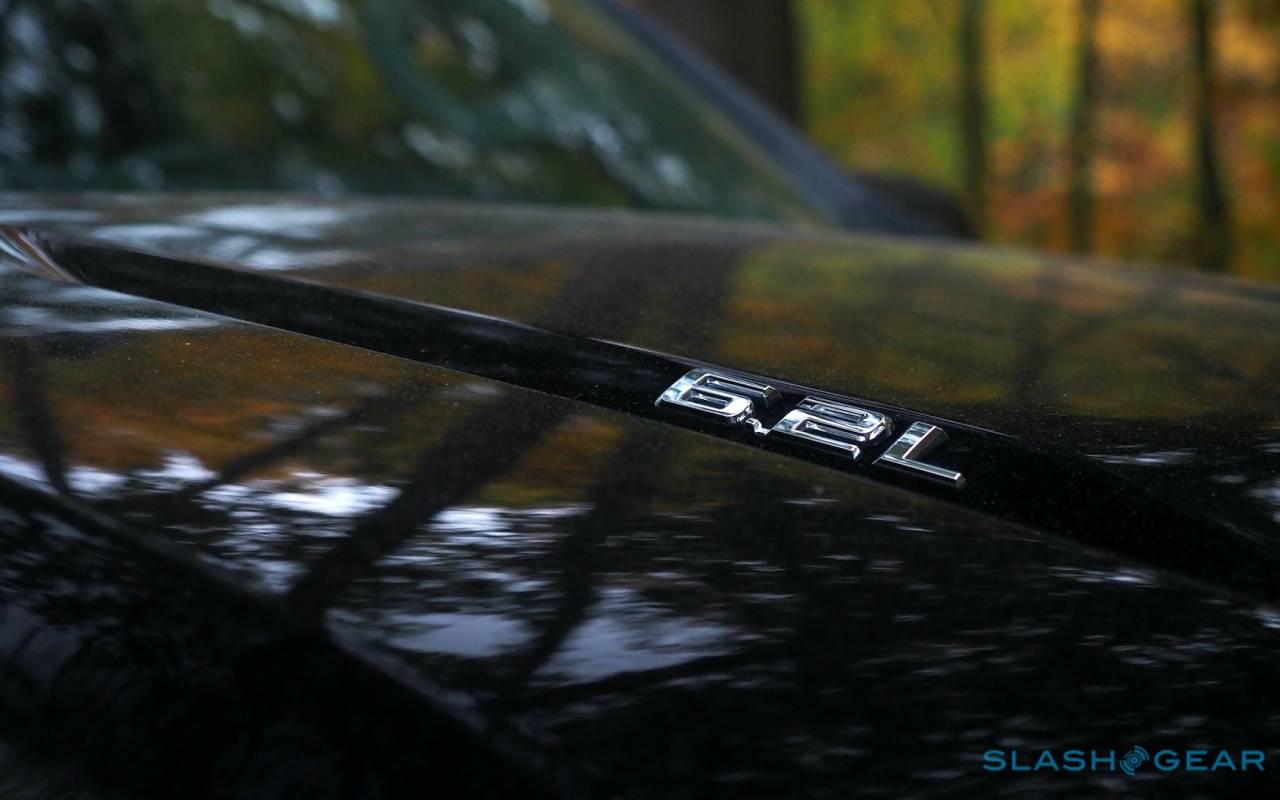 If you’re prioritizing the 420 horsepower and 460 lb-ft of torque from the 6.2-liter V8, that probably sounds like a pretty good deal. 0-60 mph comes in around 5.4 seconds, though top speed is limited to a sensible 98 mph. On asphalt, the suspension is stiff and ride comfort suffers as a result. The standard 18-inch wheels with their Goodyear Wrangler Duratrac rubber are much happier in the dirt, you’ll be unsurprised to hear. 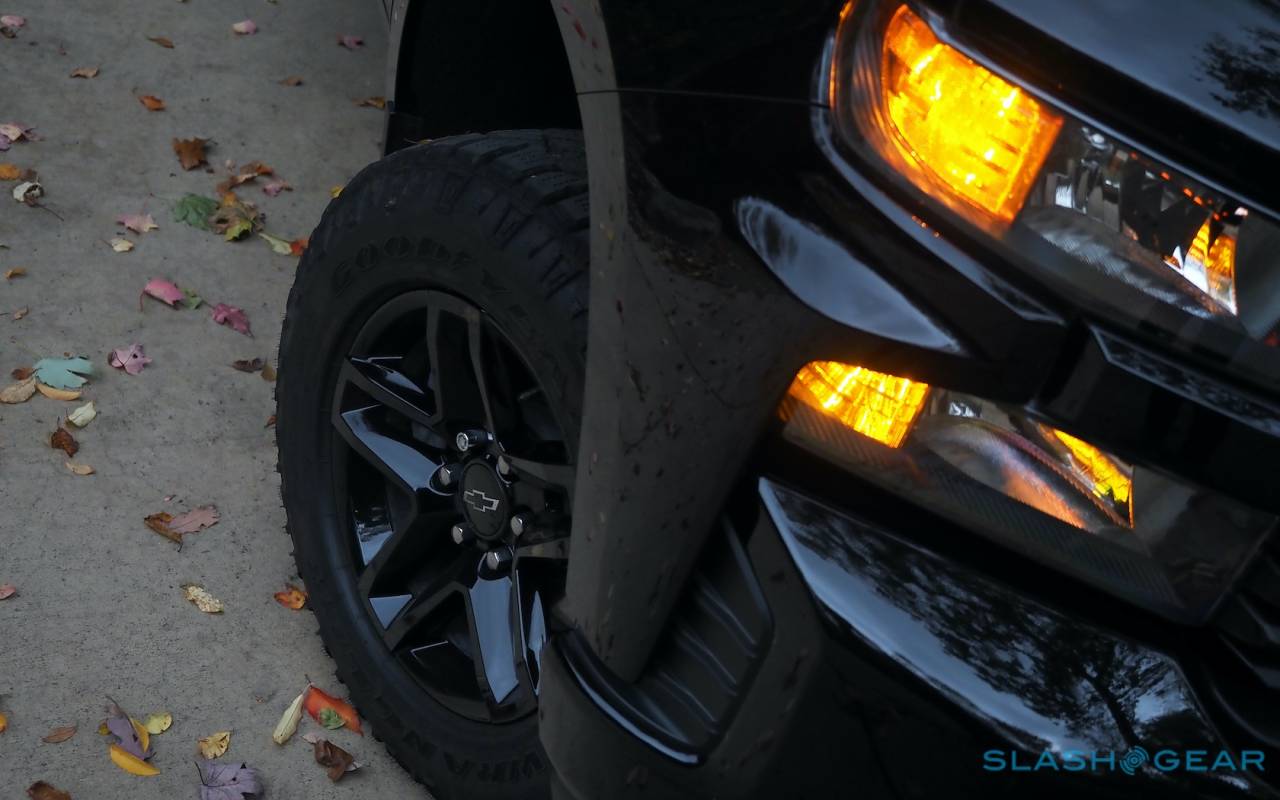 Inside, there’s not much in the way of creature comforts to distract you from the bumps. Chevy’s 7-inch infotainment screen looks pretty tiny in the center console – though you do get both wired Android Auto and Apple CarPlay – and there’s just the one USB port. Single-zone A/C is a $100 option, and there’s a whole lot of black plastic which feels far from fancy to the touch. 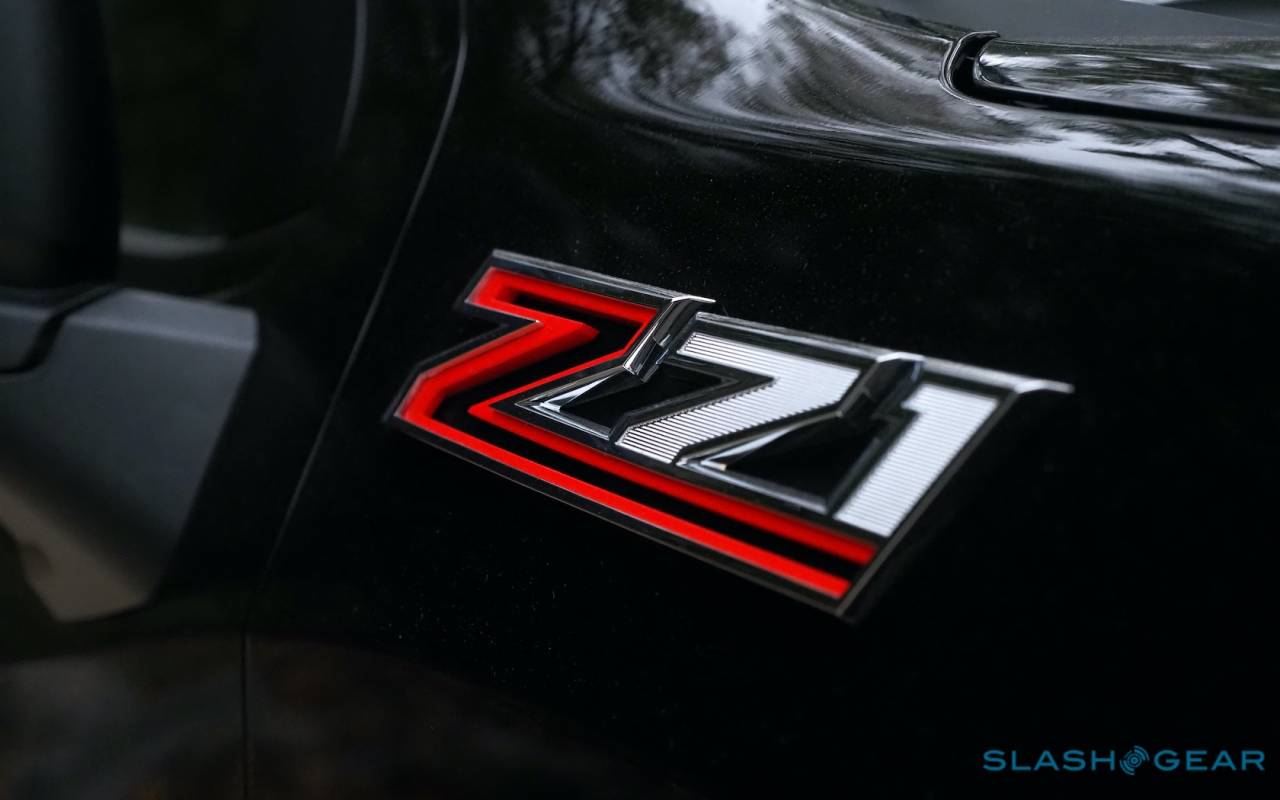 For the 2021 model year, Chevy is easing its spartan ethos a little. The 2021 Custom Trail Boss will include niceties like the Custom Convenience Package and Infotainment Package as standard, adding an EX Lift power lock and release tailgate, LED lighting for the bed, remote start, SiriusXM, and OnStar. It’ll also throw in the Safety Confidence Package, with Forward Collision Alert, Automatic Emergency Braking, and Front Pedestrian Braking, plus things like steering wheel audio controls and a 4.2-inch driver information display. 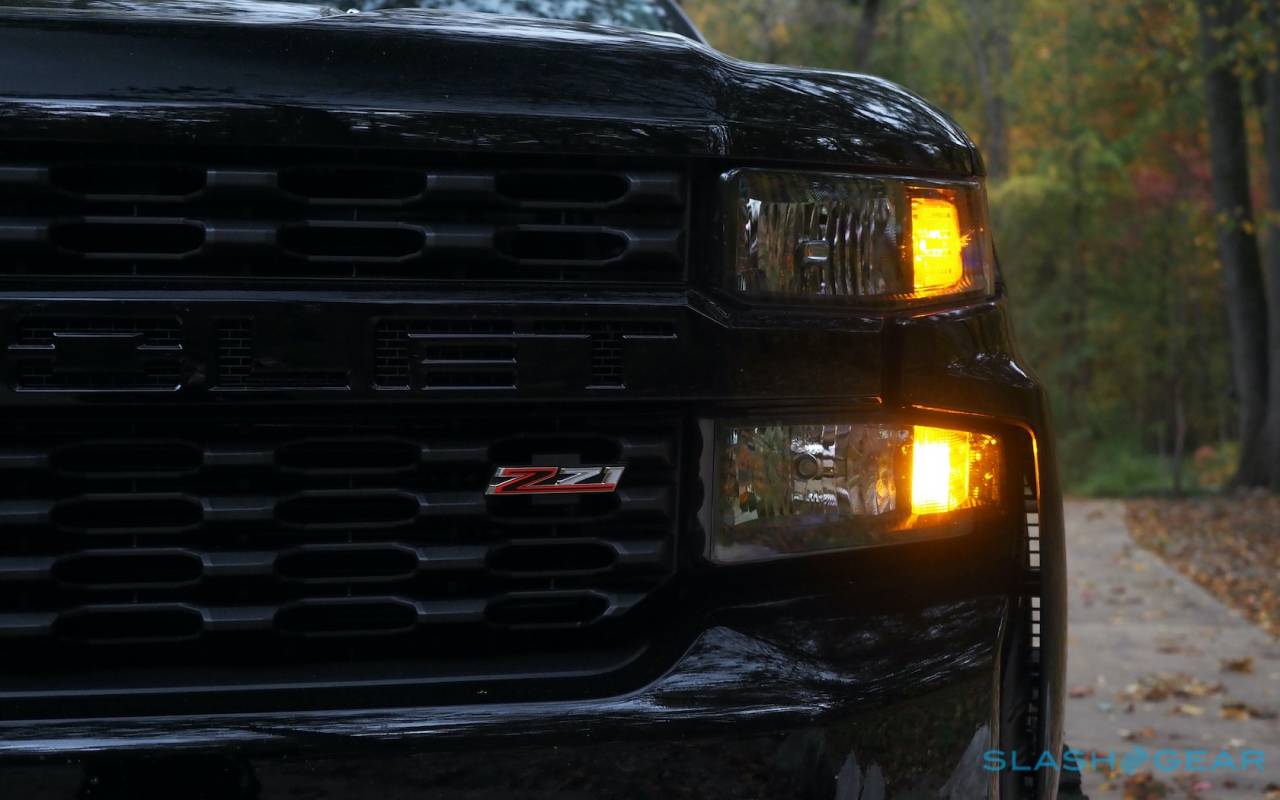 Really, how you feel about the Custom Trail Boss comes down to whether you see picking up your new Silverado as the end of a journey, or the start of one. Considering the market for custom trucks only seems to be getting bigger – and that Chevrolet says its Custom and Custom Trail Boss models are its top two conquest trims right now – it’s a sign that, while they may not be for everyone, there’s definitely an audience for potent pickups that give you the essentials and then set you loose to personalize at-will. In a growing sea of trucks, that flexibility is strangely appealing. 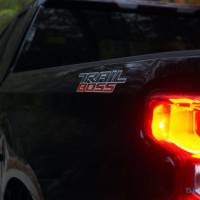 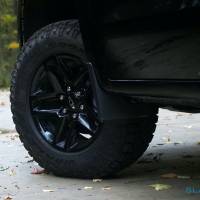 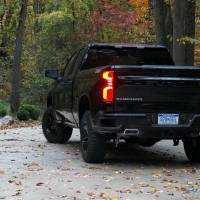 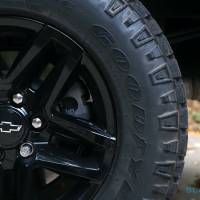 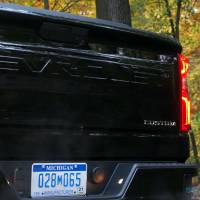