BMW was always upfront about the fact that its 8 Series would be more than just a luxury two-door GT, and now there’s the four-door 2020 BMW 8 Series Gran Coupe to whet your appetite. Three versions of the sleek “four door coupe” are being revealed today, topping out at the 2020 M850i xDrive Gran Coupe with a healthy 523 horsepower and 553 lb-ft of torque.

All three share the same core body style. While the hood of the Gran Coupe is shared with the 8 Series Coupe, from the windshield back it’s all different for the four-door. That includes being 9-inches longer, 1.2-inches wider, and 2.2-inches taller, the majority of the length increase going into 7.9-inches more wheelbase. 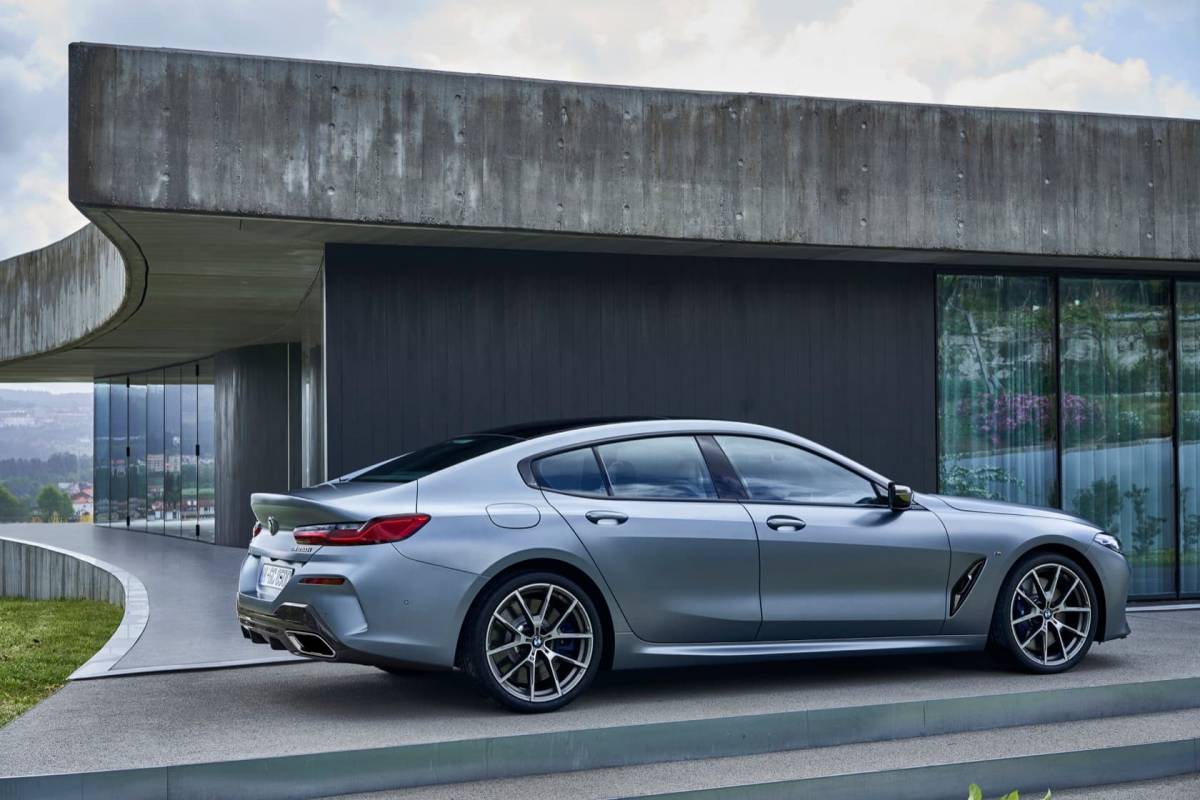 Part coupe, part sedan, the 8 Series Gran Coupe follows in the tire marks of previous BMWs. The windshield is less raked than that of its Coupe sibling, to boost headroom in the front, while the rear glass gets increased rake for an easier to load trunk. Some of the detailing is particularly notable, like the flying buttress design that demands the metalworks’ finishing to be done by hand.

A panoramic glass roof is standard, while from November 2019 production the M850i xDrive Gran Coupe will be offered with an optional carbon fiber roof. That will lower weight and the car’s center of gravity. 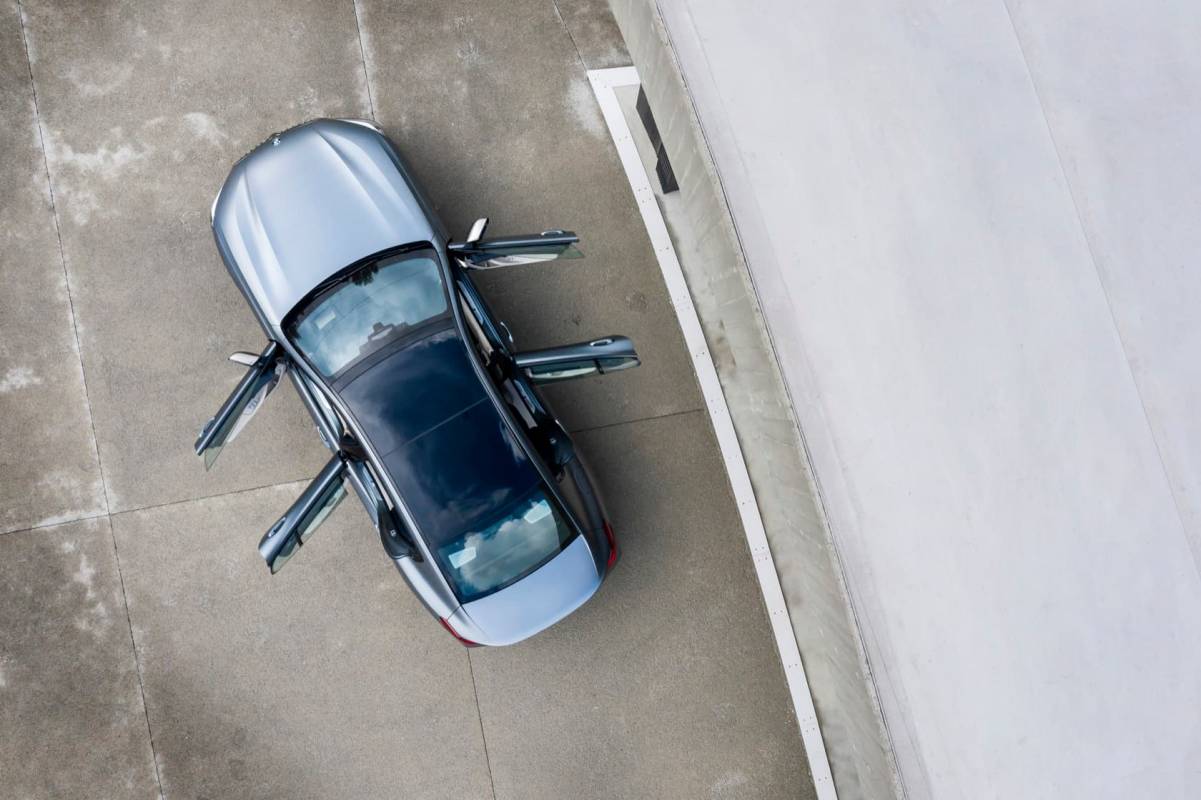 Icon Adaptive LED Headlights with Laserlight are standard, as are functional air breakers in the front fenders. BMW has used aluminum for the doors, hood, roof, front bulkhead, engine subframe, and rear bumper support, while the trunk lid is plastic and the cabin dashboard support is magnesium. At the rear, twin trapezoidal tailpipes are below slim LED lights. 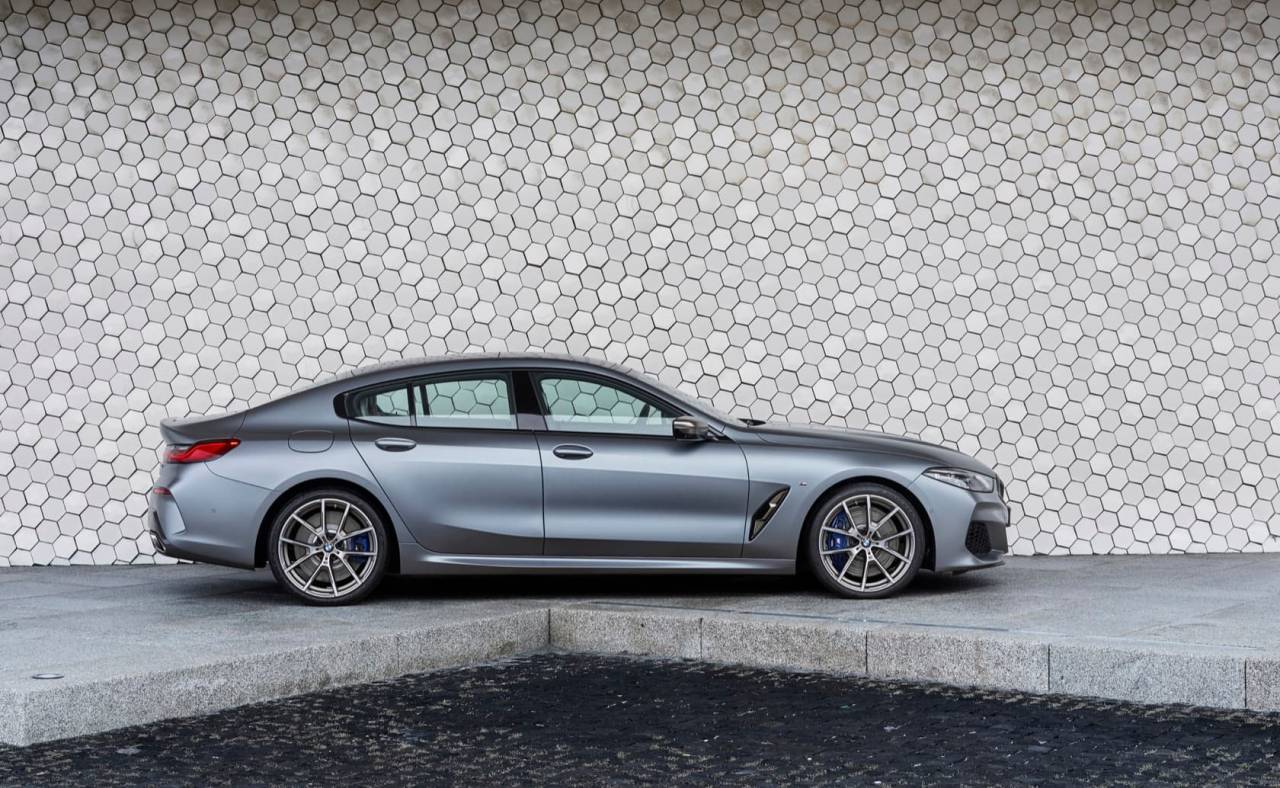 Top speed is 130 mph with all-season tires, rising to 155 mph with optional performance tires. BMW pairs it with an eight-speed Steptronic Sport transmission, with swifter gearshifts and steering wheel paddles as standard. There’s also Launch Control for the best possible 0-60 time, and integration with the navigation system so that the planned route will help the gearbox figure out what the best gear is to shift to next.

Double-wishbone suspension is used at the front, and five-link rear suspension. The steering is electromechanical, and there’s Dynamic Damper Control as standard. xDrive cars get Integral Active Steering as standard, with rear-wheel steering to tighten up the turning circle at low speeds and increase maneuver stability at high speeds. It’s optional on the rear-wheel drive 840i. 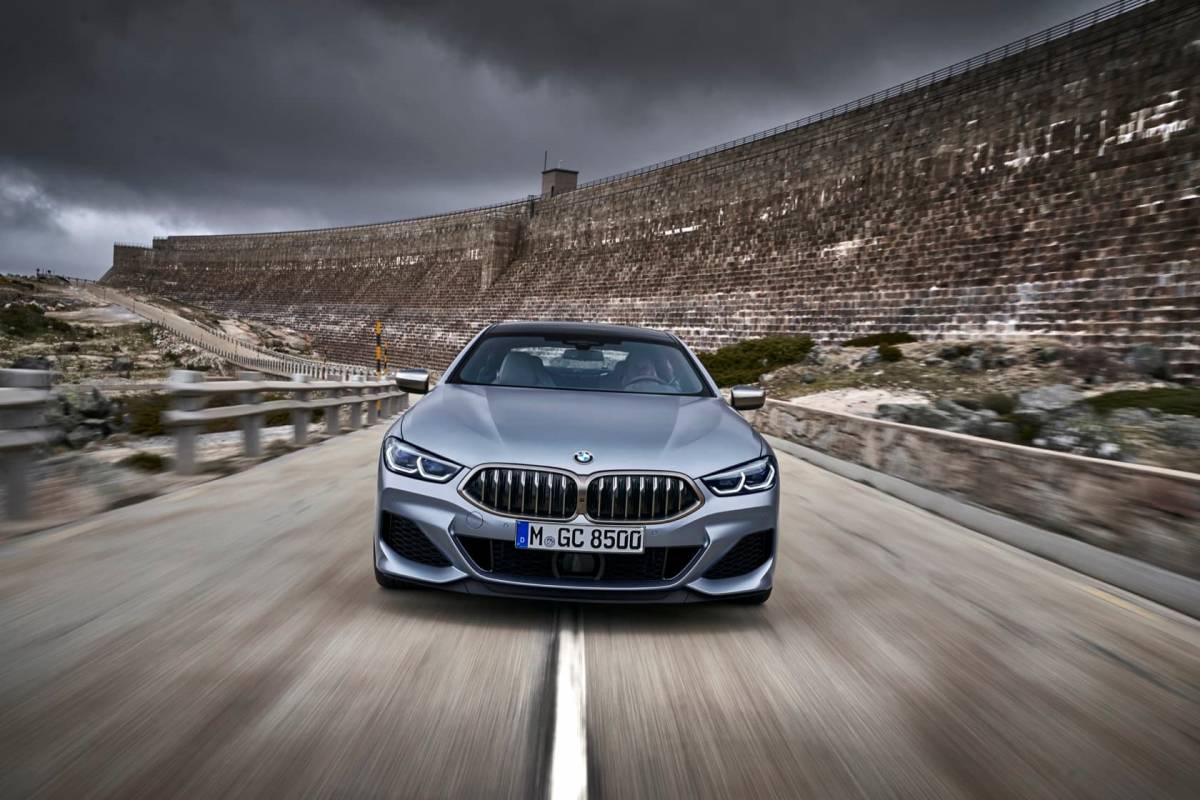 It gets the same 8-speed transmission, and a new flap-controlled sports exhaust that can switch up its audio profile according to the drive mode. That spans Comfort through to Sport and Sport+. 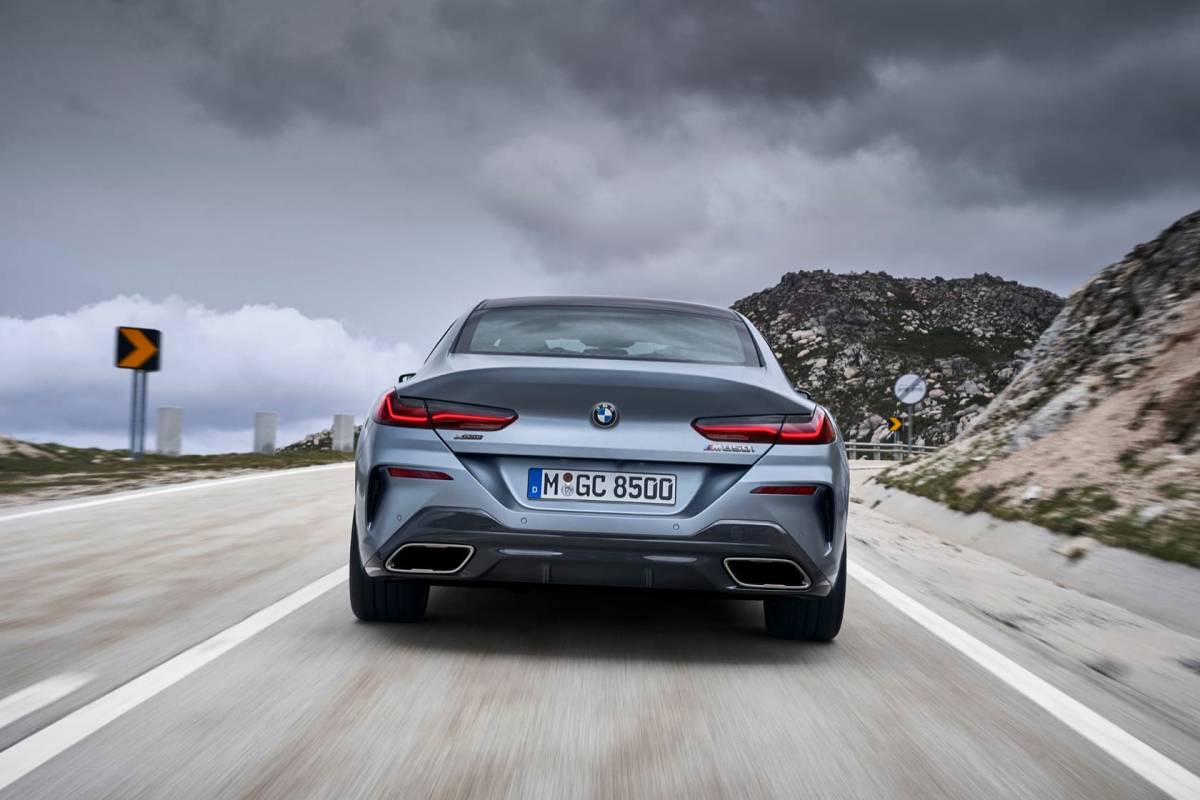 The xDrive AWD uses an electronically-controlled multi-plate clutch, to push power front and rear as traction demands. Normally, though, the car is rear-biased. The M850i gets 20-inch V-spoke cerium grey wheels with 245/35R20 and 275/30R20 performance run-flat tires as standard. M Sport brakes are standard, too.

With seating for five, the interior of the 8 Series Gran Coupe is far more people-friendly than its Coupe sibling. Headroom in the rear, in particular, has increased: there’s now 3.4-inches more, while legroom is up 7.1-inches. The wider body means rear shoulder room is up 7.7-inches, while the trunk holds 0.7 cu.ft. more. 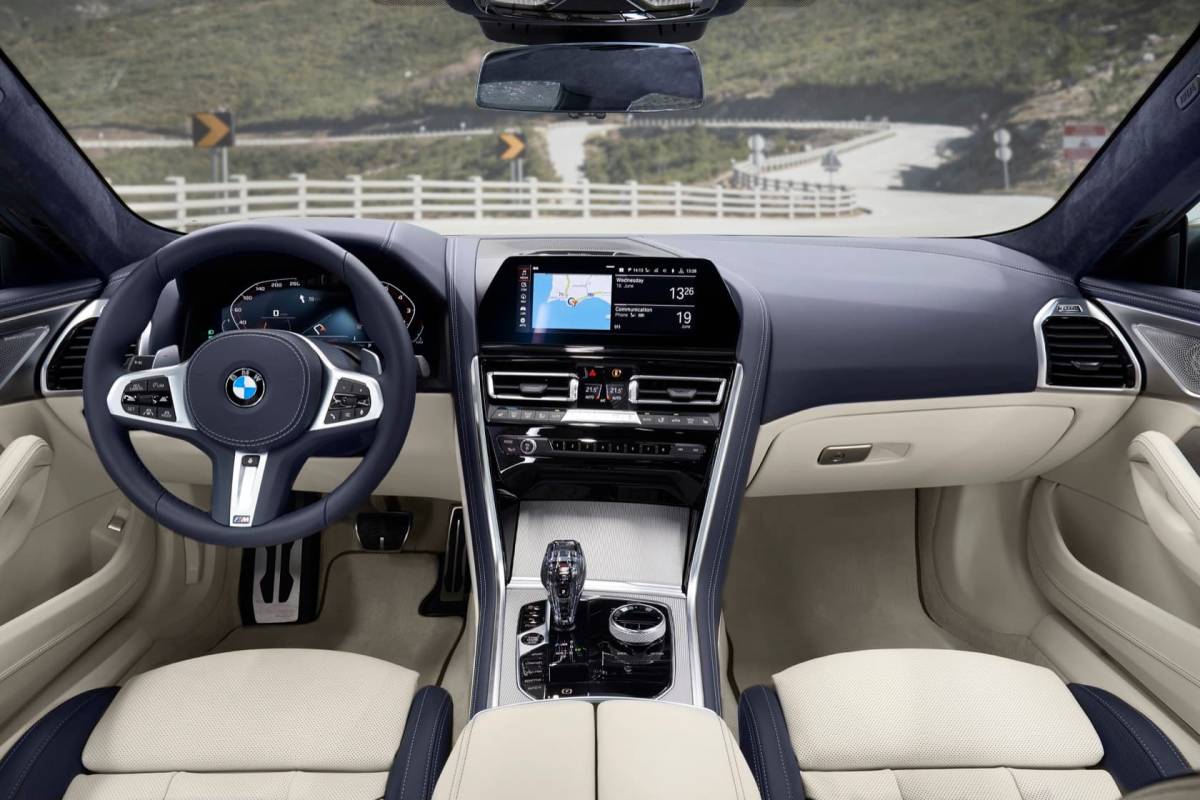 Nappa leather has been used on the dashboard and upper door panels, and there’s an extended center console which stretches into the rear and divides the rear seats. Admittedly that’s likely to make the center seat the last-picked option. Within the console there are dedicated rear climate controls along with air vents, storage, and USB-C ports.

In the front, heated sport seats are standard. The rear seats fold with a 40/20/40 split. Ambient LED lighting is standard, as is the BMW Live Cockpit Professional system with a 12.3-inch digital cluster display and a 10.25-inch center console touchscreen. Haptic controls have been added to the iDrive controller, while a head-up display is optional. 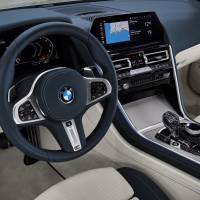 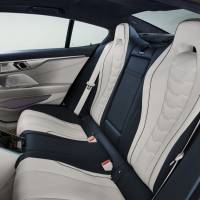 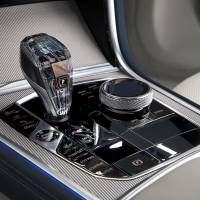 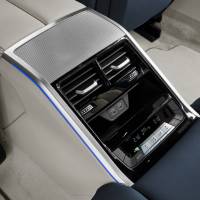 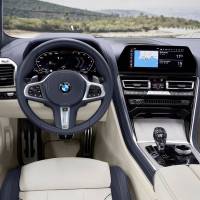 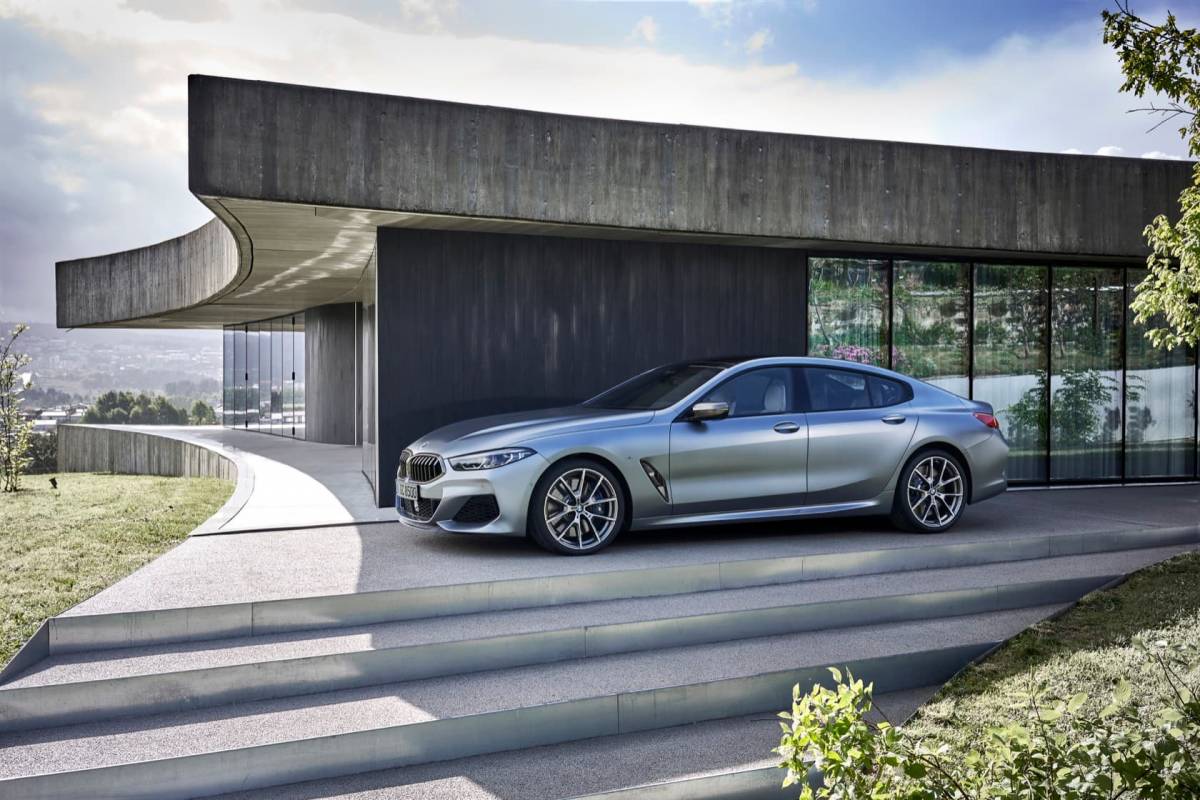