The first-generation Audi RS7 Sportback was a marvelous car, but it had some quirks. With only seating for four inside, the promise of a high-speed luxury sedan with coupe-styling felt a little cramped. Now, Audi is changing all this and more with the second-gen 2020 Audi RS7 Sportback. Beauty may be in the eye of the beholder but I’m a big fan of the new design, and crucially it doesn’t look like a regular A7 Sportback. Indeed, the only shared elements between the base model and the RS7 are the roof, hood, front doors, and tailgate. Everything else is unique.

The sweeping roofline and lower stance give the car a more aggressive and racier vibe, but it’s the wider girth and muscular shoulders that really mark it out as something special. The new RS7 is 1.6-inches (40 millimeters) wider at the front fenders than the old car, while the new front bumper gets a flat Singleframe grille, Audi having eliminated the contrasting borders around it to give the RS7 a more distinctive fascia. 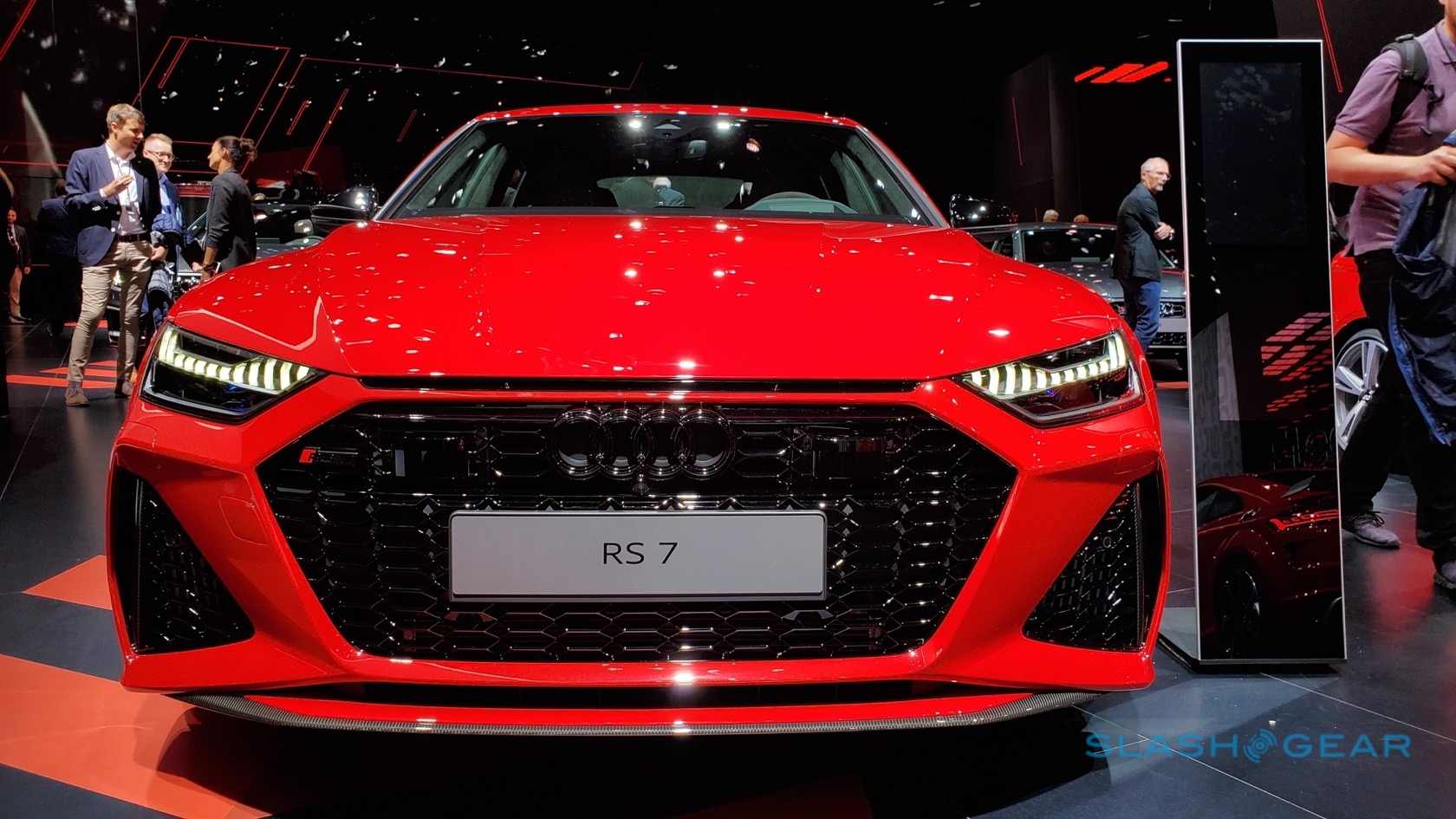 That grille is also a little wider and sits lower in the front bumper. Still, the biggest defining RS factor is the larger front air inlets with their vertical fins. More than a design feature, those air inlets are designed to suck in more air to feed the powerful motor under the hood. With the Carbon Styling Package, meanwhile, you get carbon fiber vertical fins for a properly sporting demeanor.

Viewed from the side, the RS7 is a winner. There are curved surfaces, sharply defined lines, and aerodynamically enhanced side sills to accentuate the high-performance nature of the new RS7 Sportback. In the back, everything looks clean and modern, with an LED light strip linking the main taillights. 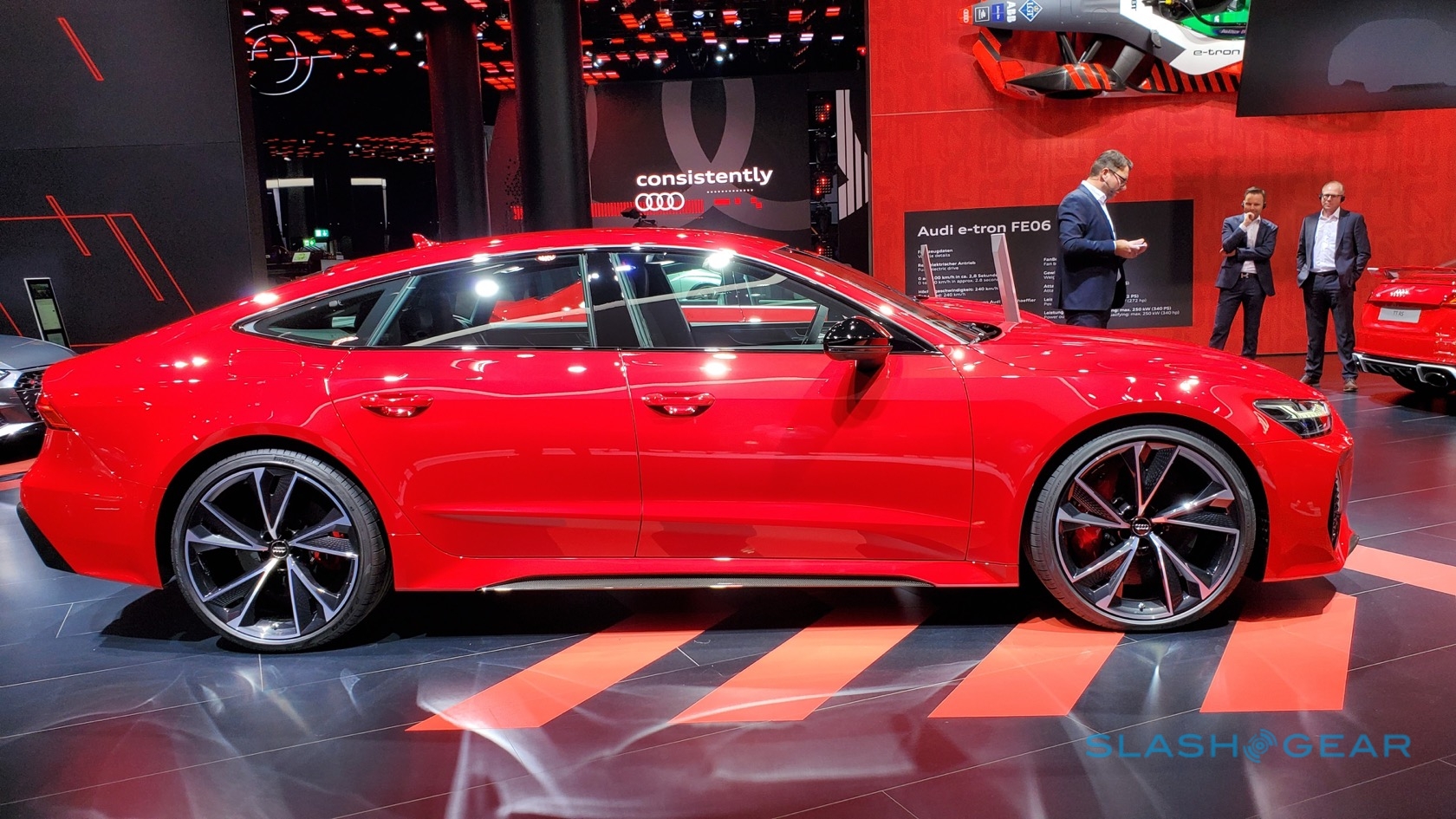 Chrome oval-shaped tailpipes sit on each side, between the new rear diffuser. You may not notice it outright, but the car also receives a spoiler, extending upwards from the tailgate. It deploys automatically at 74 mph to smoothen the airflow, while pushing the rear of the vehicle down. For all intents and purposes, the RS7 Sportback is a proper luxury car; it certainly has the presence. However it’s the type of luxury car you’ll want to drive yourself, and that’s all down to the V8. 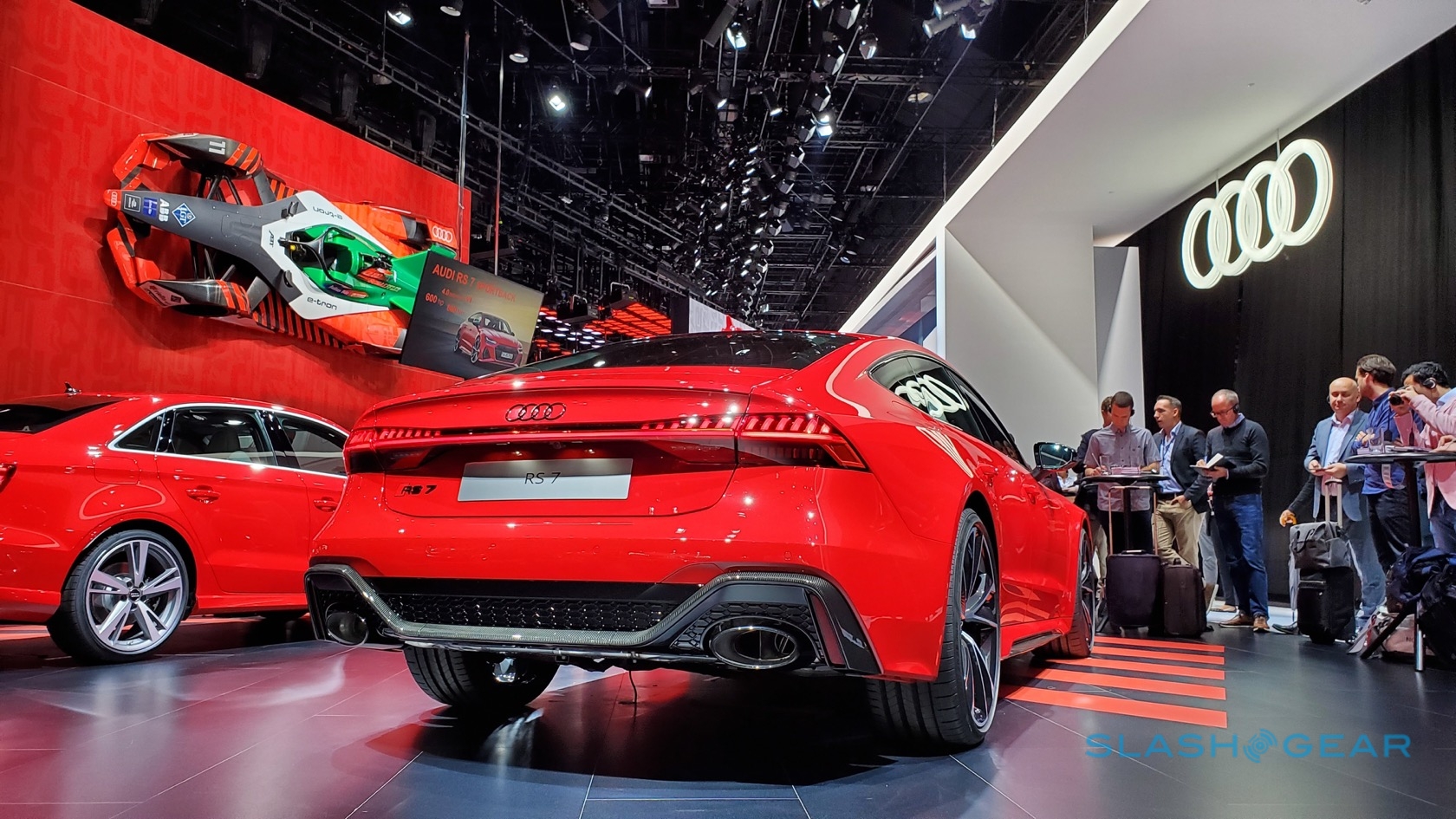 Before we discuss the mouthwatering V8, it’s only proper to divulge some important bits about the mild hybrid system. Yes, the 2020 Audi RS7 Sportback is a mild hybrid, but it has nothing to do with boosting engine performance. Unlike the EQ Boost mild hybrid system in use by Mercedes-AMG, Audi’s version is engineered to boost efficiency and fuel economy.

The system comprises a belt alternator-starter to recover up to 12 kW of electricity under gentle acceleration; the electrons are fed to a small lithium-ion battery. When driving at speeds between 34 and 100 mph, the drive management system can either recover more energy or allow the vehicle to coast silently (note: US models doesn’t come equipped with the coasting feature) with the engine off. This same mild-hybrid system also enables the RS7 to start-stop at speeds below 14 mph. Stepping on the gas pedal awakens the engine under both circumstances. 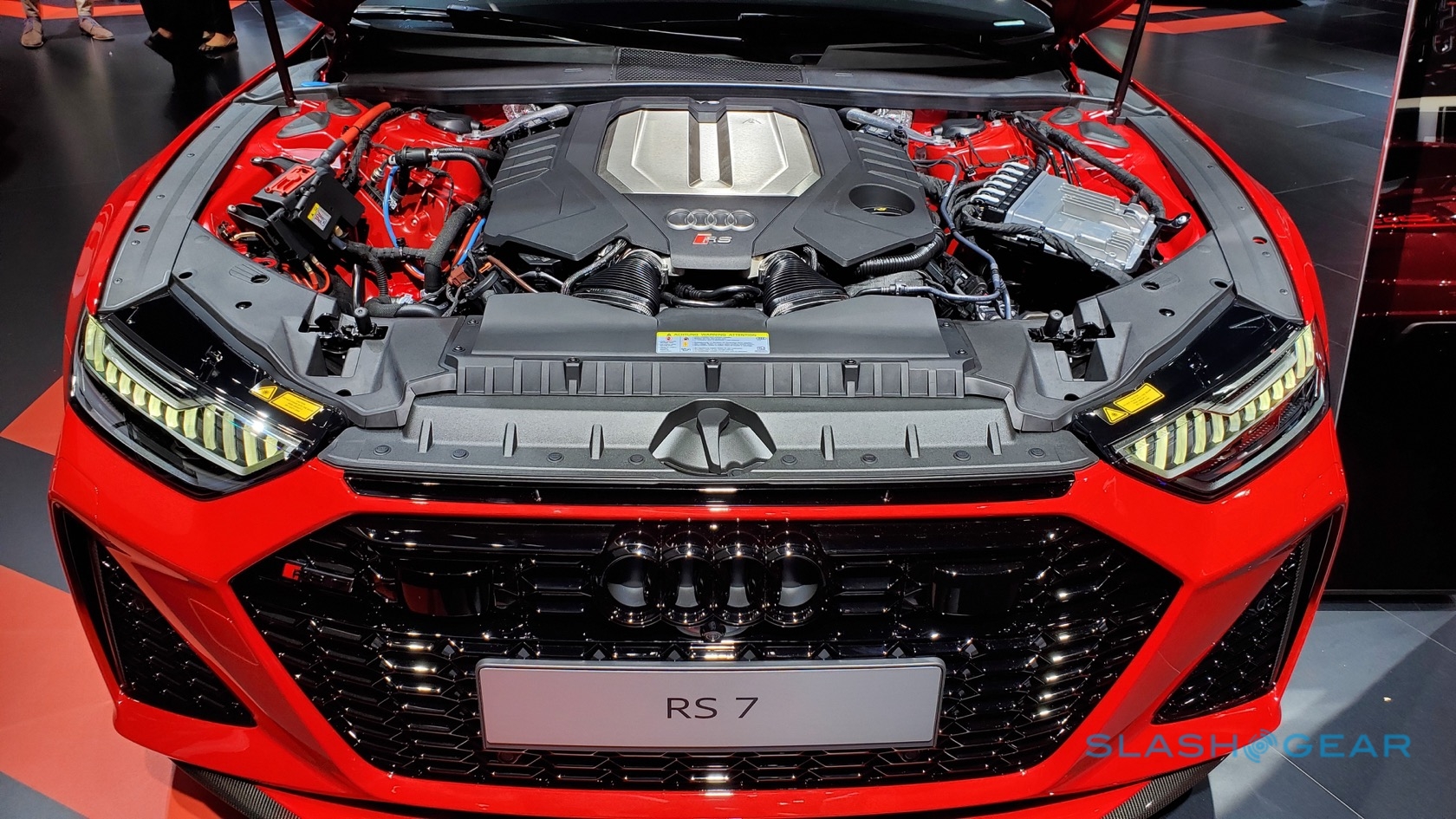 Combined with the cylinder-on-demand system that deactivates half of the cylinders when driving slowly or in traffic, Audi claims the car saves 0.8 liters per 100 kilometers. Frankly, it’s not much. But it’s great Audi is taking steps to maximize fuel economy without penalizing acceleration and high-speed performance.

With the new Audi RS7 Sportback, speed is the name of the game. The vehicle makes good use of a 4.0-liter TFSI turbocharged V8 motor producing 600 horsepower. More importantly, the motor churns out 590 pound-feet of torque from 2,100 to 4,500 rpm. With this much power and torque, the RS7 Sportback rockets effortlessly from 0 to 60 mph in 3.6-seconds, which is 0.3 seconds faster than its predecessor. Top speed is electronically limited to 144 mph (250 kph). 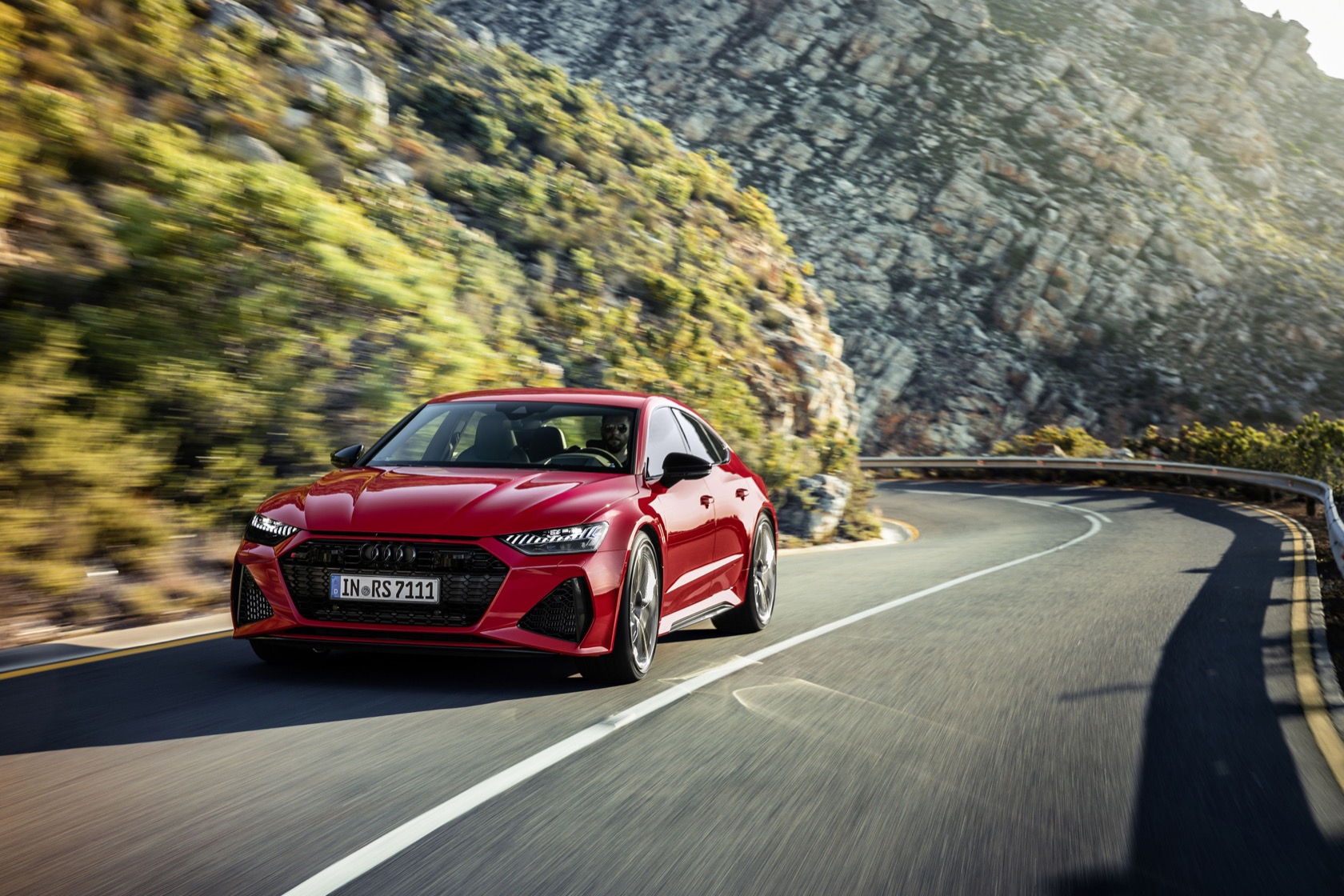 Selecting the Dynamic or Dynamic Plus package raises the top speed to 174 mph (280 kph) or 190 mph (305 kph) respectively. The engine is mated to a standard eight-speed Tiptronic transmission with launch control. Power is fed to all four wheels via the Quattro permanent AWD system. In normal driving mode, power is split 40:60 between the front and rear axle. But, with a mechanical center differential, the AWD system can transfer up to 70-percent of torque to the front wheels and up to 85-percent in the back. What this should mean is sure-footed handling and relentless traction on any type of road surface, regardless of the weather.

The RS7 Sportback comes standard with wheel-selective torque control, while Audi’s Quattro sport differential in the optional Dynamic and Dynamic plus packages shifts the torque between the left and right rear wheels to maximize stability. Also fitted as standard is RS adaptive air suspension, with controlled damping and automatic leveling control. It can lower the car by 0.8-inches (20 mm) in the normal setting, while the suspension lowers further by 0.4-inches (10 mm) at speeds above 75 mph. This same system can also raise the vehicle by 0.8-inches (20 mm) to clear most obstacles. 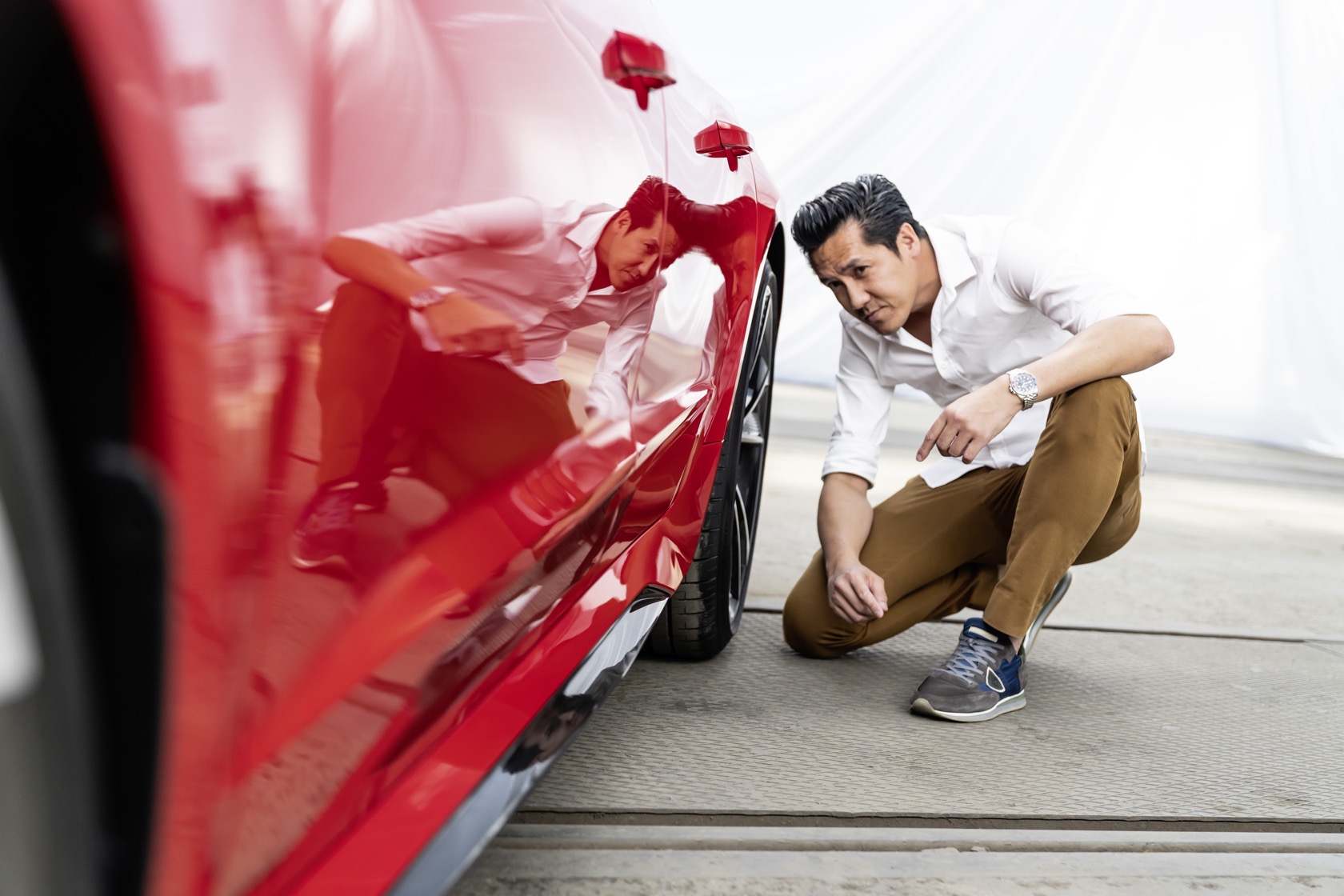 If you don’t care for the air suspension option, the RS7 can be fitted with optional RS sport suspension with Dynamic Ride Control. This is the sportier option that further improves handling while minimizing pitching and rolling movements as the car attacks a sharp and winding curve. The system utilizes conventional steel springs and new dampers with integrated valves, to alter the damping levels depending on the chosen driving mode. 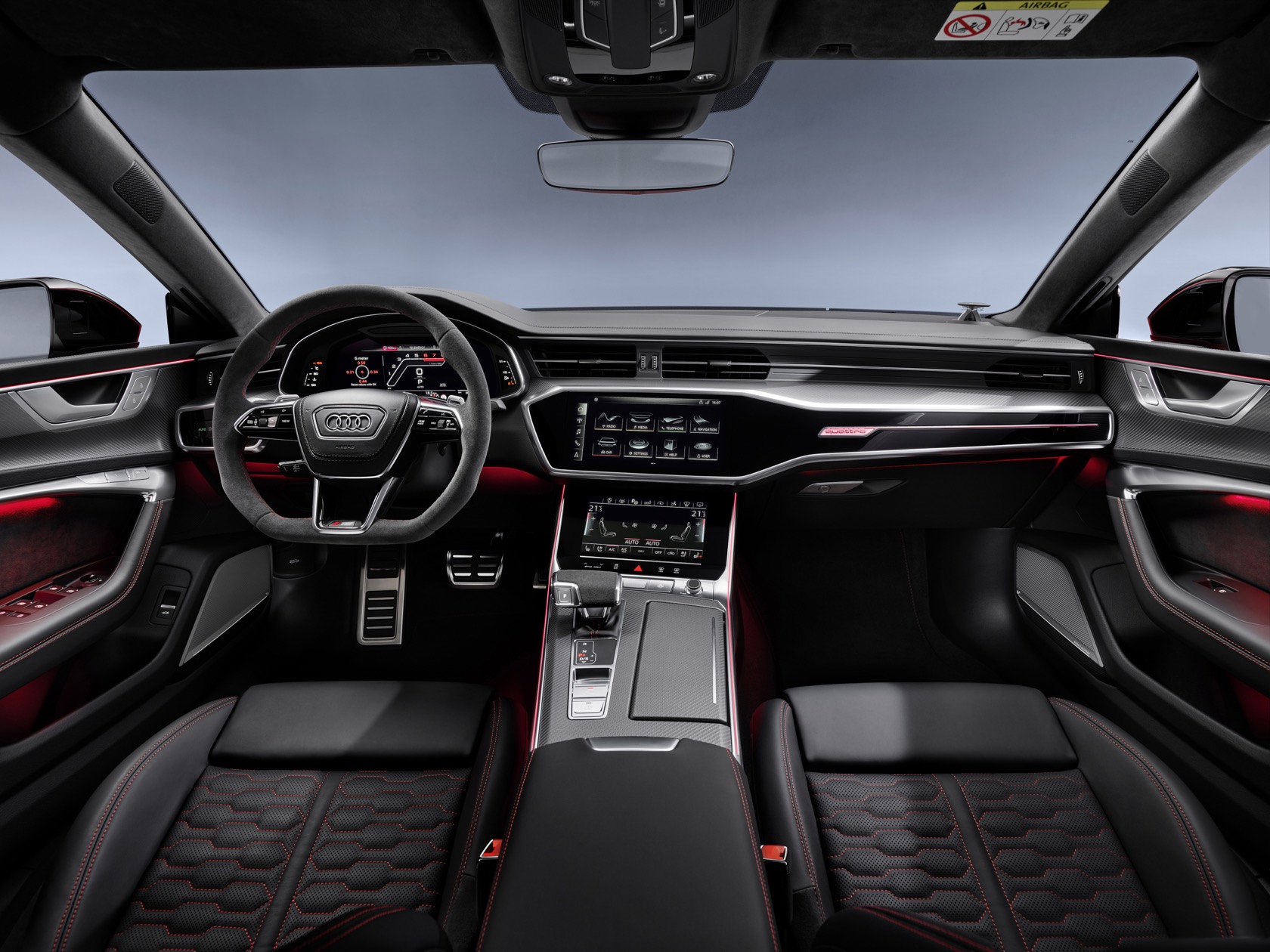 The 2020 RS7 Sportback’s cabin is typically Audi, with immaculate fit and finish. What I noticed first was the new MMI touch response infotainment display, a welcome improvement over the outgoing model. The flat-bottomed RS sport leather steering wheel is equipped with new RS aluminum shift paddles with multifunction buttons. That includes the RS MODE button, which the driver can select using RS1 and RS2 mode. 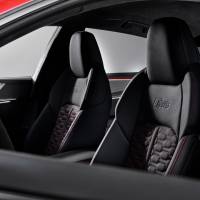 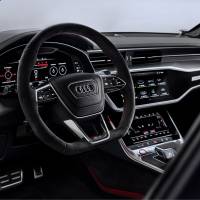 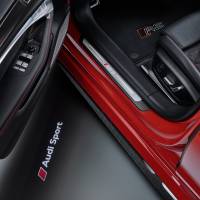 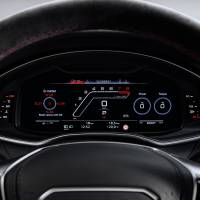 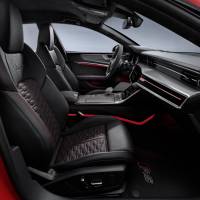 Also standard is the Audi virtual cockpit to display engine torque, tire pressure, oil temperature, boost pressure, acceleration, g-forces, and lap times. You even get a shift light to tell you when to engage the next gear before the engine reaches the redline. The 2020 Audi RS7 is a luxury car you can bring to the track, and all these gadgets are proof of that.

Still, the interior is not short on unique high-end touches. There are logo projectors on the front and rear doors that beam the Audi Sport emblem onto the ground when the doors are ajar. The standard RS sports seats are covered in black pearl Nappa leather with rhombus patterns and embossed RS logos. You can even choose the optional perforated Valcona leather RS seats with heating and cooling functions. Standard equipment includes 21-inch cast-aluminum wheels (larger 22-inch alloys are optional), a 360-degree camera, and safety assist systems including lane change warning, curb warning, adaptive cruise assist, and intersection assist. 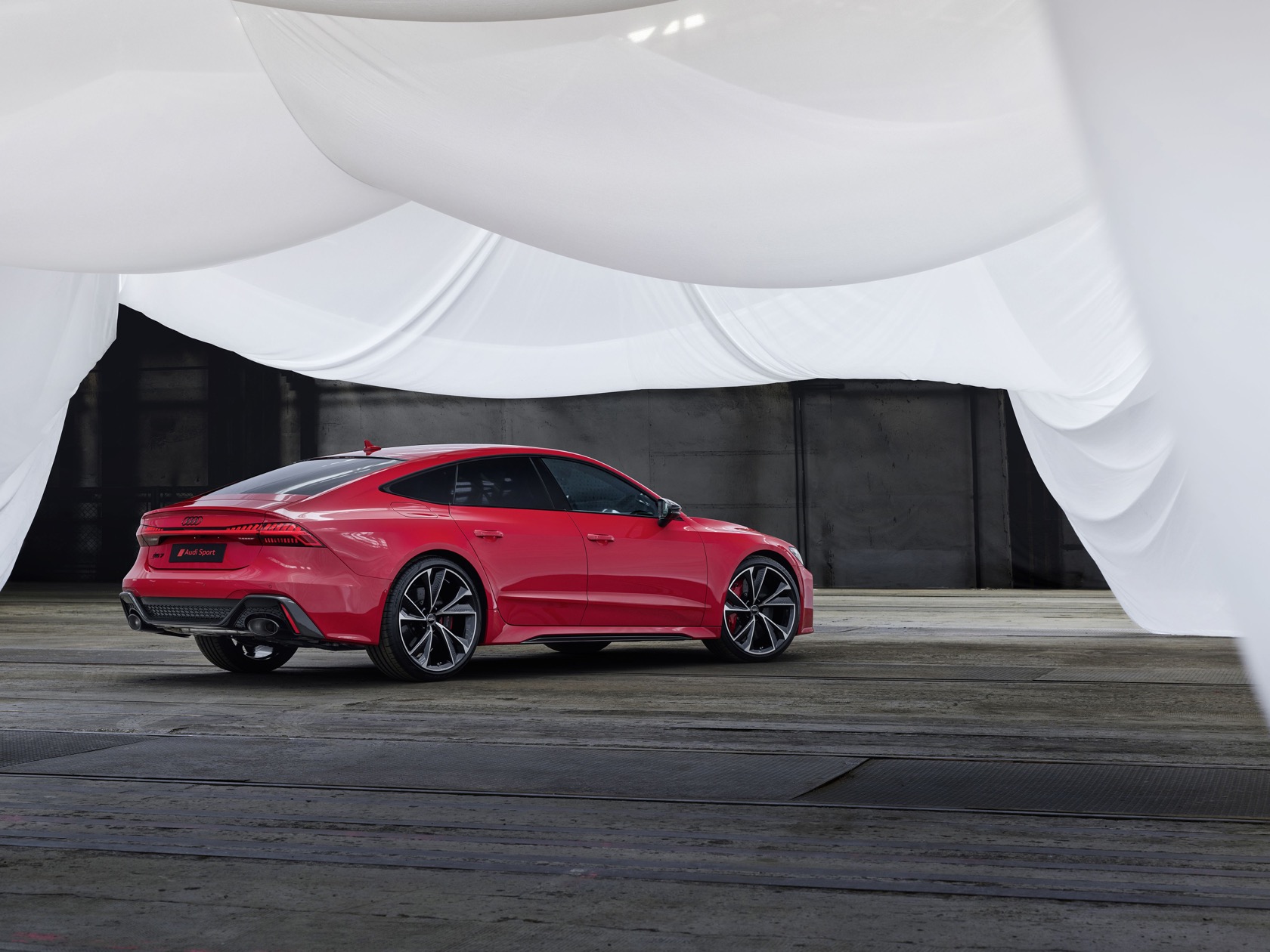 The 2020 Audi RS7 Sportback will be available at European dealerships by early 2020, with U.S. deliveries following soon after. Pricing will be confirmed close to launch, and all I know is that I can’t wait to get behind the wheel.