2019 BMW 8 Series Convertible revealed: This is the M850i droptop

The 2019 BMW 8 Series is a unique car for BMW. It’s not as plush or excessively luxurious as the Mercedes-Benz S-Class Coupe, nor is it as aggressively sporting as a Porsche 911 or Aston Martin Vantage. There are, it turns out, a whole host of ways to build a grand tourer. Where the Aston Martin DB11 is a sporty GT, the all-new 8-Series is a more elegant way to transport four people – and their four golf bags. With the new 2019 BMW 8 Series Convertible, meanwhile, you can do so with the top down.

In a sense, this segment confusion is by design. The 8 Series in both coupe and drop-top forms are aimed at multiple niche markets, with some of the models straddling between niches. In the case of the 8 Series Coupe, that’s positioned between a “traditional” sports car and a grand tourer. It can give the Mercedes S-Class Coupe a serious run for its money in terms of luxury accoutrements, true, but the BMW is more athletic and more eager to hug the bends. 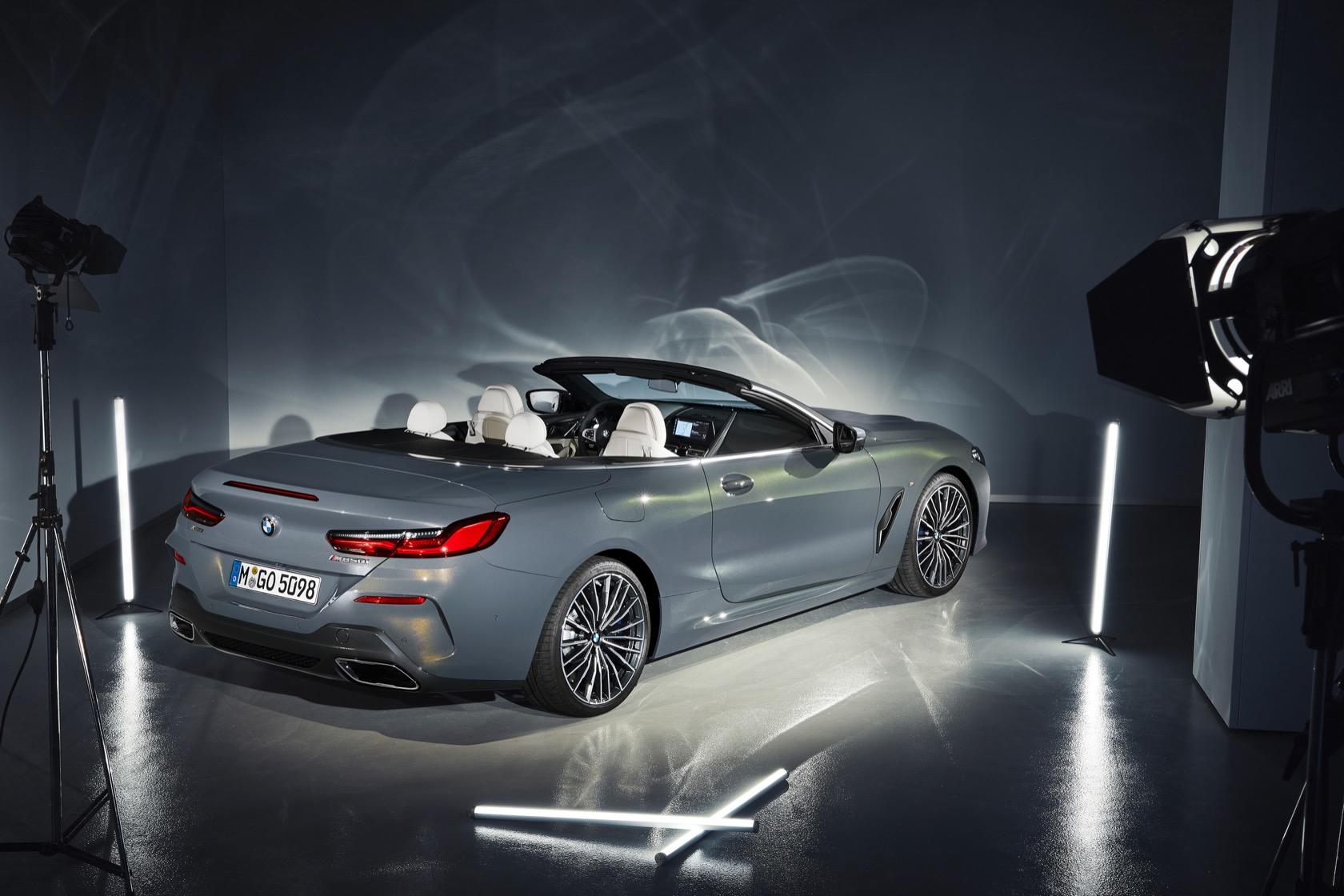 It’s the same story with the 8 Series Convertible. High-end open-top cars typically cluster either toward the performance end of the spectrum – giving you maximum aural feedback with no roof in-between your ears and the engine – or the cruising luxury extreme. Maybe it’s just my eyes, but I think the 8 Series Convertible has to be one of the sportiest yet most elegant luxury convertibles at first glance. I mean no disrespect to the Bentley Continental or the Rolls Royce Dawn Drophead Coupe, but neither of those cars appear sportier than the BMW 8 Series Convertible.

The aggression comes courtesy of the same turbocharged 4.4-liter V8 motor as found in the 8 Series Coupe. It’s good for 523 horsepower and 553 pound-feet of torque. Both models get the same 8-speed Steptronic transmission, too, along with active rear axle steering, and a standard limited slip differential in an all-wheel drivetrain. Where the Series Coupe can sprint from 0 to 60 mph in 3.7 seconds, the 8 Series Convertible does the same feat in 3.9-seconds, keeping almost all of the athleticism of the hard-top. 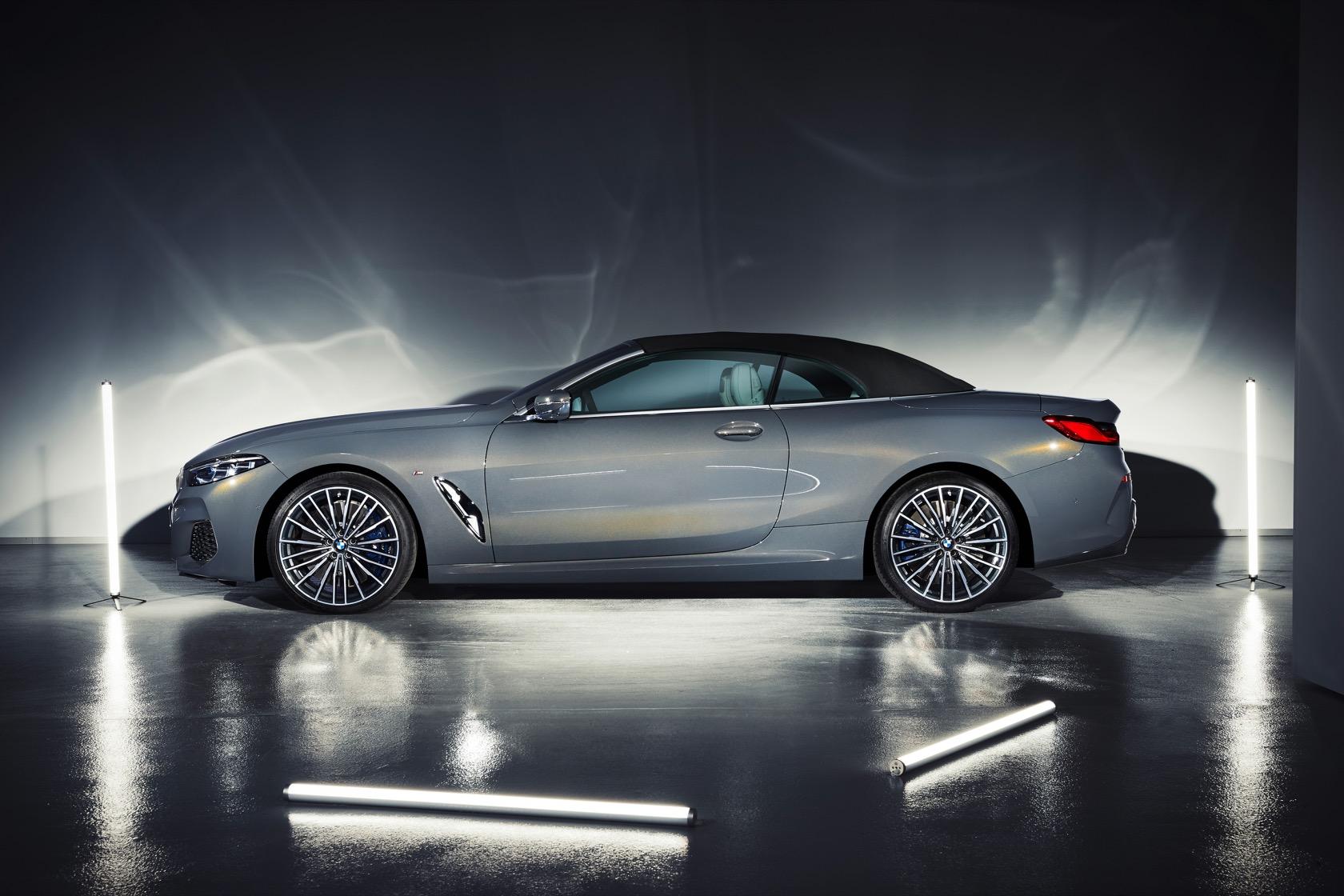 Being a convertible, though, the 8 Series has another important number attached: its soft top can fold up or down in roughly 15 seconds. You can activate the roof at speeds of up to 31 mph (50 km/h), too. With the roof down, the luxurious cabin is exposed for everyone to see. Sitting inside the 8 Series, the emphasis toward luxury and refinement are clearer. In the form of the hard-top, from my experience, as you get moving, the sports car attitude pops up both on road and then again – much more pronounced – on the race track. 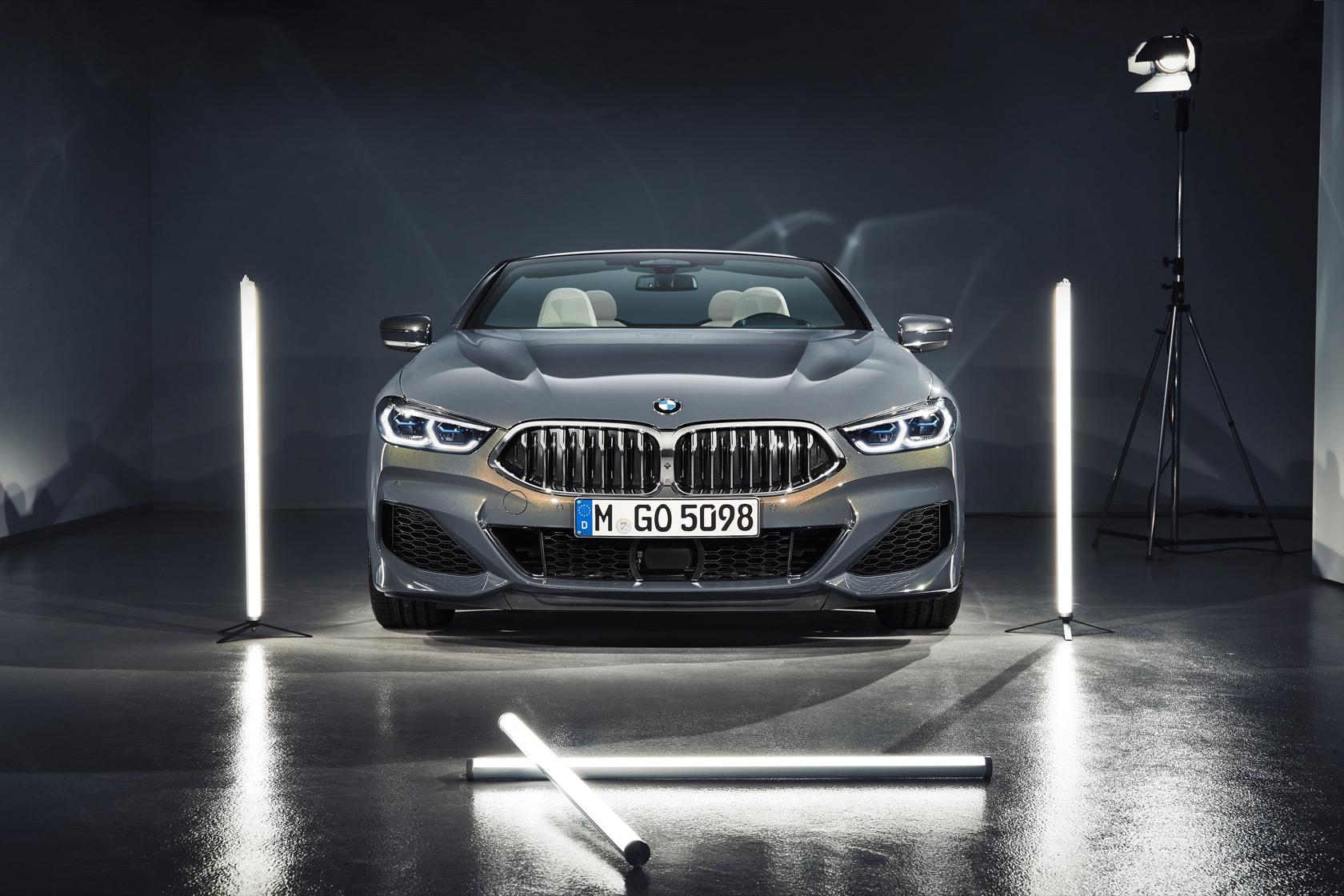 The 4.4-liter turbocharged motor growls with authority as it approaches higher revolutions. The 8-speed auto in Sport mode is ridiculously quick to react. However, the ride is always smooth and serene. When you turn the wheel, the nose reacts instantaneously to follow your inputs. I’m yet to drive it, but I would suspect that even in convertible form, the 8 Series would keep that razor-sharp driving experience.

But when all is said and done, even the convertible version of the 8 Series has another ace up its sleeve: practicality. The trunk can accommodate 420-liters of storage, which is enough for up to four golf bags. Capacious indeed, but it did get me thinking: what if BMW used some of that trunk space to further improve the rear seats? All the Merino Individual leather in the world – standard on the 8 Series Convertible – can’t hide the fact that the second row accommodation isn’t exactly expansive. 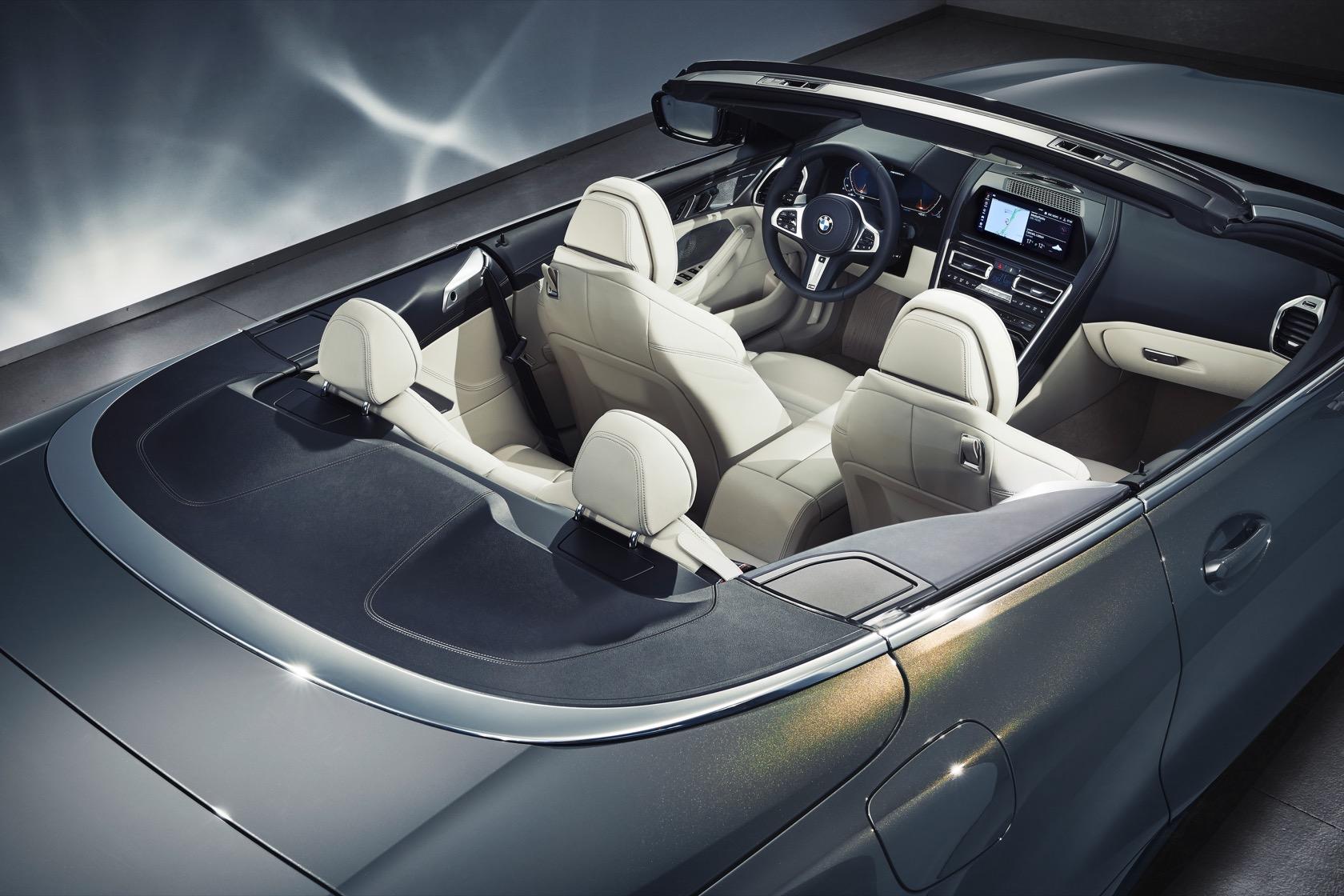 It underscores that, despite the 2+2 seating, things are definitely better if you grab a spot up front. There, new climate seats optionally offer both heating and an updated cooling system, drawing in interior air before distributing it out via the series of fans. Color-changing ambient lighting is standard, pulsing to indicate incoming calls or other situations, as is a 12-speaker Harman Kardon audio system. A glass package adds crystal-like finishes to key controls. 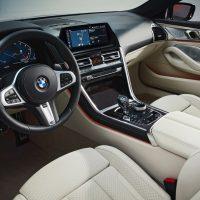 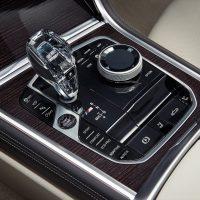 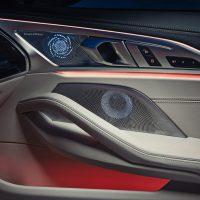 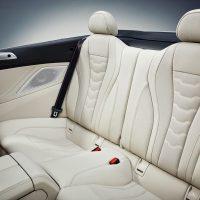 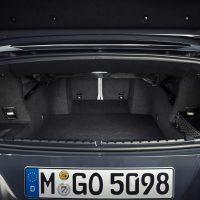 First model out of the gate will be the 2019 BMW M850i xDrive Convertible, at $121,400 (plus $995 destination) with Adaptive M suspension, electronically controlled dampers, speed-adjusted steering, and optional active roll stabilization. There’s a lot to like about it, both how it looks and how it should drive, too. All the same, while BMW has clearly done as much as possible to infuse the 8 Series convertible with the sort of driving reflexes you might associate with a Porsche 911 or Audi R8, that grand tourer DNA edges it back from the most exhilarating sort of driving. Even with the four-wheel steering system installed, there’s no way to disguise the length and heft of the car. 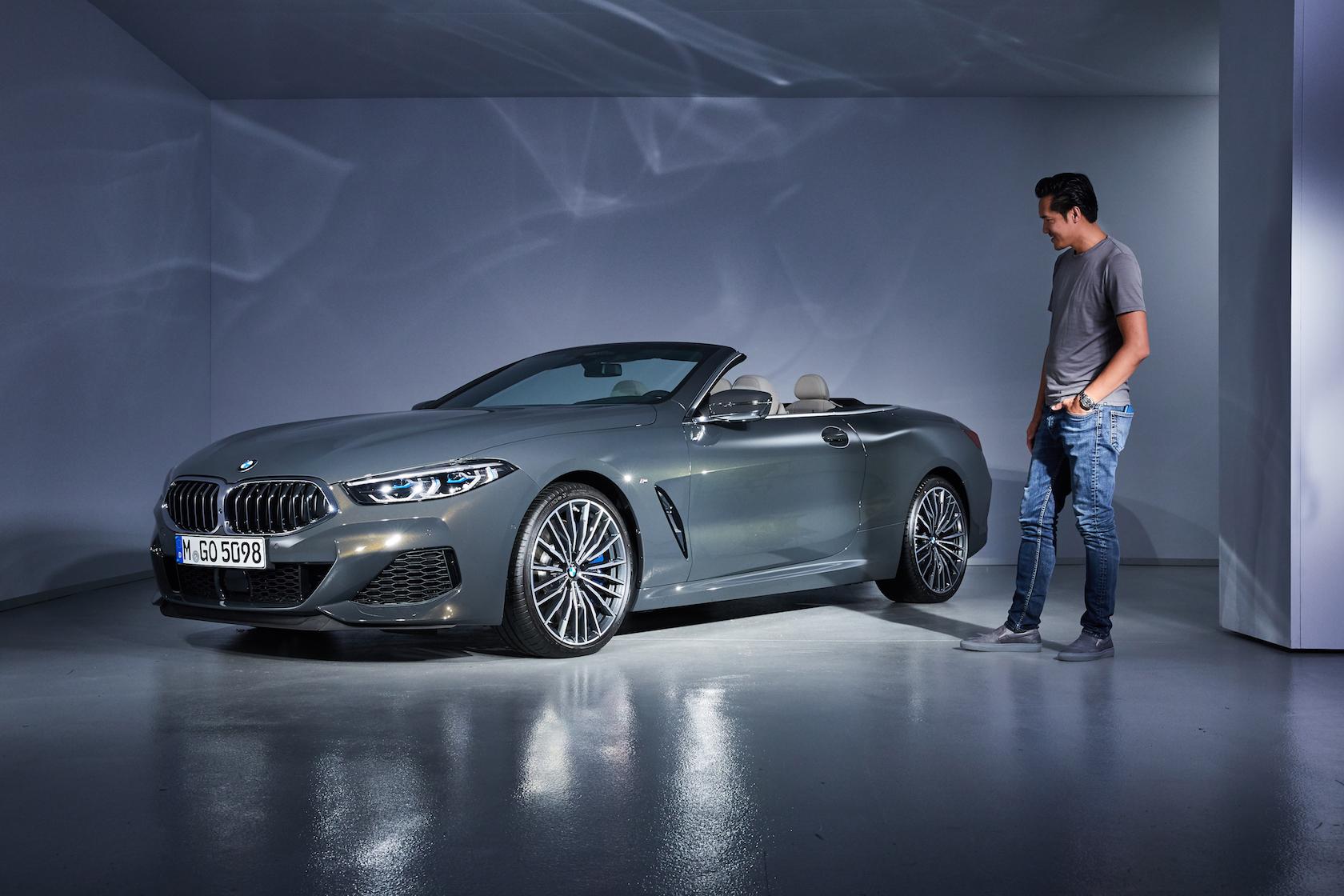 Then again, why would you or anyone drive the BMW 8 Series Convertible like a maniac? Frankly, you shouldn’t. The best way to do so is to fold the top down, put on some sunglasses, play some tunes on the optional – but ever so impressive – 1,375 watt Bowers & Wilkins audio system, and cruise away. Sure, the V8 motor might urge you to breach the speed limit, but your time in the 2019 8 Series Convertible is probably best enjoyed more leisurely, soaking up the attention and making the most of the beautiful cabin. You’ll be able to do that from March 2019, when the 2019 M850i xDrive Convertible shows up in US dealerships.