15,543,000. That’s the number of 3 Series that BMW has produced over the past four decades – and now seven generations – of the iconic sports sedan. BMW enthusiasts often argue about which generation is best, the never-settled discussion generally focusing around the second generation E30 (1982–1994) and the fourth generation E46 (1998–2006). Both of these 3 Series would raise the benchmark of what a great sports sedan should be, with their precise steering, even weight distribution, power delivery, and sheer driving pleasure.

Through the generations, the 3 Series has grown significantly in both size, available technology, and power. At the same time, the purists put the E46 on a pedestal against which any modern 3 series should be compared. They’re a tough audience, too: it’s fair to say that the sixth generation car never met with quite the reception BMW hoped it might. 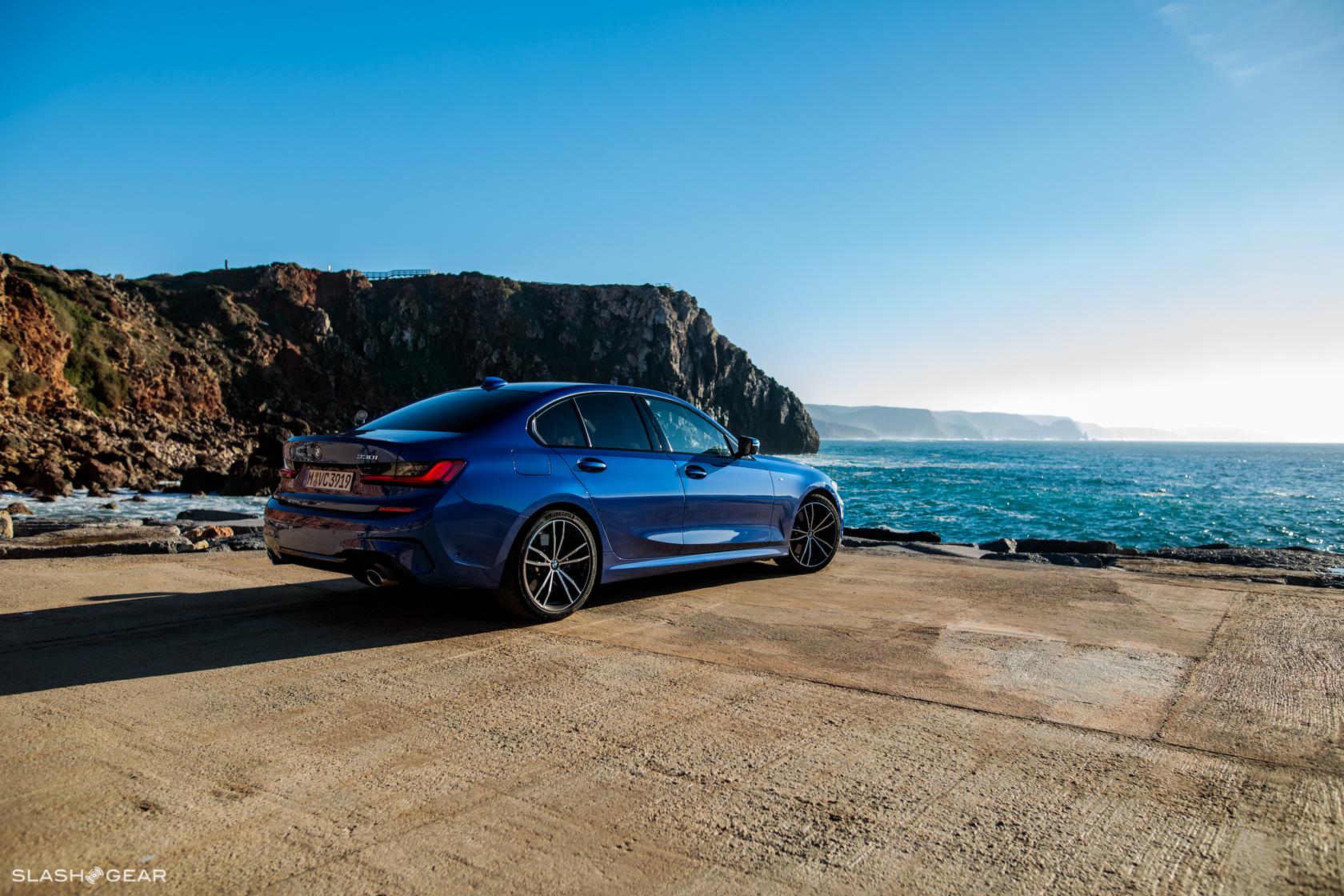 For this latest 3 Series, then, BMW’s designers have tipped their hat to the E46 even more consciously. It starts with the angular line leading from the lower grill to the shark-fin shaped intrusion into the G20 headlight, itself meant to mimic the lower shape of the old E46 headlights. Gone are any unnecessary cutouts in the bumper, to give the new 3 Series a cleaner old-school look. Still, it wasn’t just the designers who started looking back at 3 Series history.

Chassis and engine engineers also went to work to build a more dynamic 3 Series. The chassis is now 50-percent stiffer, the sedan is now back to a perfect 50/50 weight distribution, the center of gravity has been lowered by -10 mm, the overall weight is down -121 lbs, the front track has increased by +43 mm, and the rear track by +21 mm.

To see first hand what BMW has accomplished, the automaker invited us the beautiful Algarve, Portugal a few hours south of Lisbon, to take a road trip not only through incredible scenery but through the new 3 Series line-up, too. We would start with the 2019 330i M Sport, as it will be the launch model when the car debuts from $41,000 in the US early next year, the car our host through a mixture of small towns and beautiful twisty mountain roads.

Setting into the new 3 Series, the first thing that you notice is the lack of analog gauges. The cockpit is now comprised of two displays, a large screen right in front of the driver and a second in the middle atop the center console. BMW has played with the arrangement of the driver’s display, and have unwound the tach and speedometer to display them along the edges of the screen, instead of in the traditional circle. This allowed them to display more useful information in the center of the display. Also, all of the driver controls have been centralized around the shifter in a tidier layout. 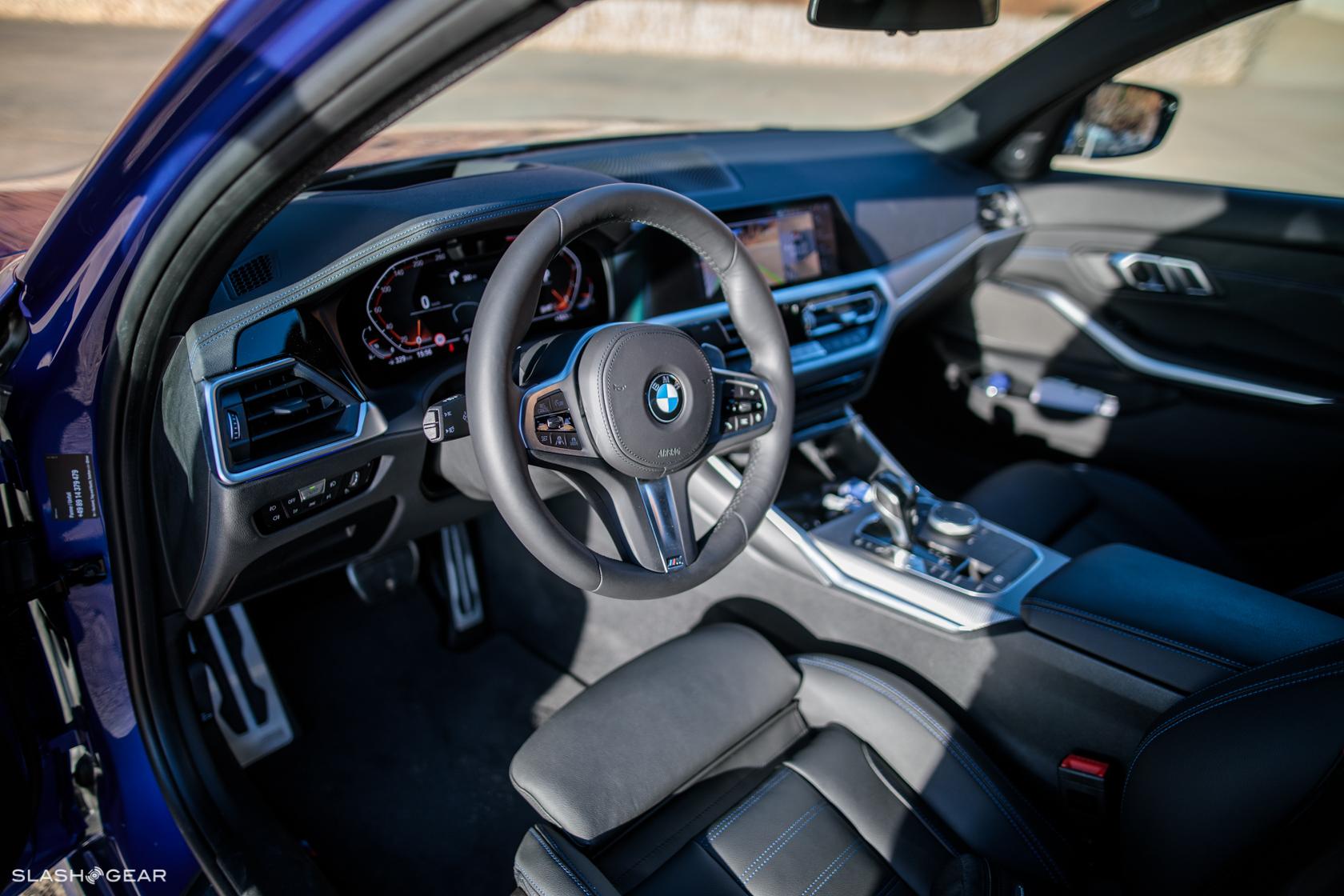 I started the drive with the 330i M Sport set to its default Comfort mode. The Driving Experience Control adjusts the steering, transmission, suspension, and xDrive bias. The first thing I noticed is that, even in Comfort, everything felt sharp. The best improvement comes in the steering feel as BMW has really fixed the responsiveness. In the last generation, it felt like there were some major dead spots where there was no response out of the steering input. After leaving the town and approaching the twisty roads, I switched into Sport mode and the engine revs jump as the transmission immediately jumped down a gear. I start pushing, and the car is not backing down; thanks to all of the new suspension magic that the BMW engineers have worked out, the whole thing feels stable and well planted. 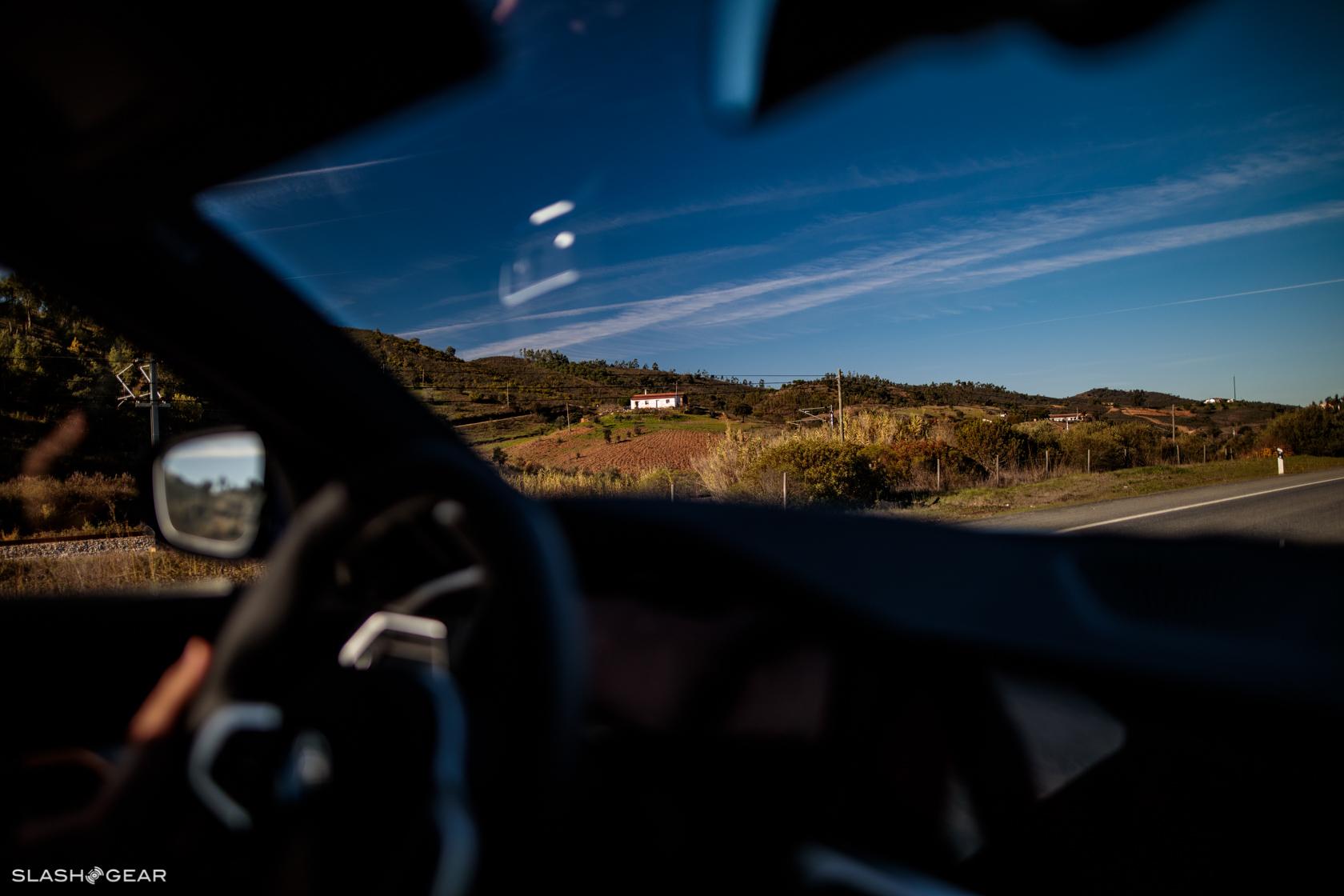 BMW for the first time has introduced lift-related dampers that are part of the car’s standard chassis. The newly developed suspension and damping system contributes to the well-balanced handling of the car. The dampers work to reduce body movements and even out vibrations caused by uneven pavement and when pushing the car through high-speed turns. Extra hydraulic damping at the front axle and a compression limiting system at the rear continuously adjust the overall firmness, according to the changing spring travel. Altogether it helps reduce that unsettling response that you often feel when driving over larger bumps, uneven surfaces, or twisty mountain roads.

The 330i M Sport comes equipped with the optional M Sport suspension, helping tighten up the car even further with its rigid bearings and additional body struts, firmer springs and anti-roll bars, and an even higher degree of wheel camber. The damping forces are 20-percent greater than the standard suspension during high-speed, twisty road driving; the difference between the two suspension options is now twice as great as it was in the previous 3 Series. Both the xDrive all-wheel drive and sDrive rear-wheel drive models benefit from the M Sport suspension’s 10mm lower ride height, something previously absent on xDrive cars. 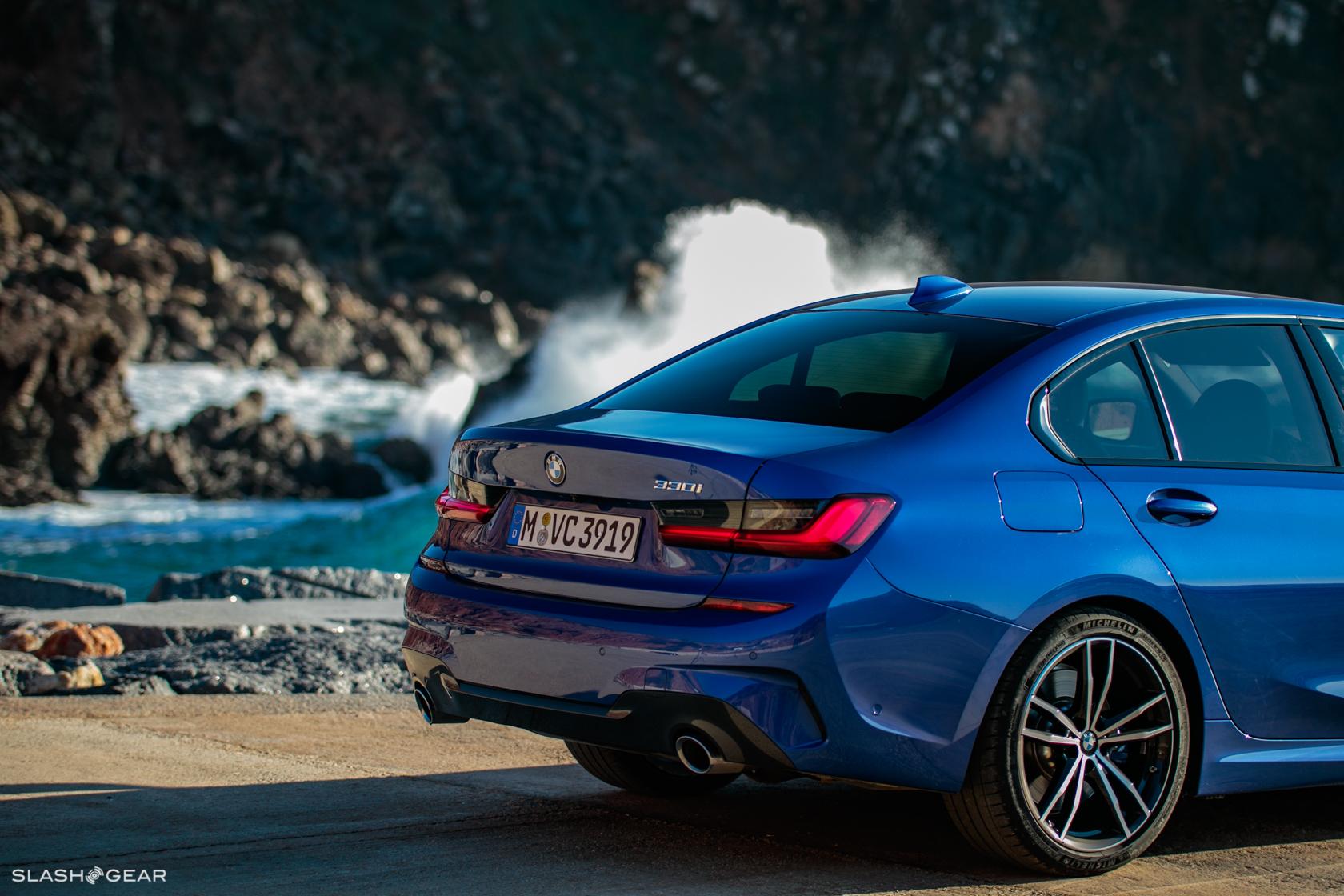 So far I’m totally smitten with the 330i M Sport, and it’s not even the tip of the 3 Series spear. The engine’s power delivery is great, though I definitely felt some drop out at the higher rev range; that’s to be expected from a four-cylinder. Switching the transmission into Sport mode and letting it handle the gear changes itself, I was pleasantly surprised by how the car almost always seemed to be in the right gear. I experimented with using the paddle shifters, but almost always ended up back in Sport or Sport+ mode as it really allowed me to focus on the driving. There was really nothing I could do with the paddles that the car was not already doing itself. 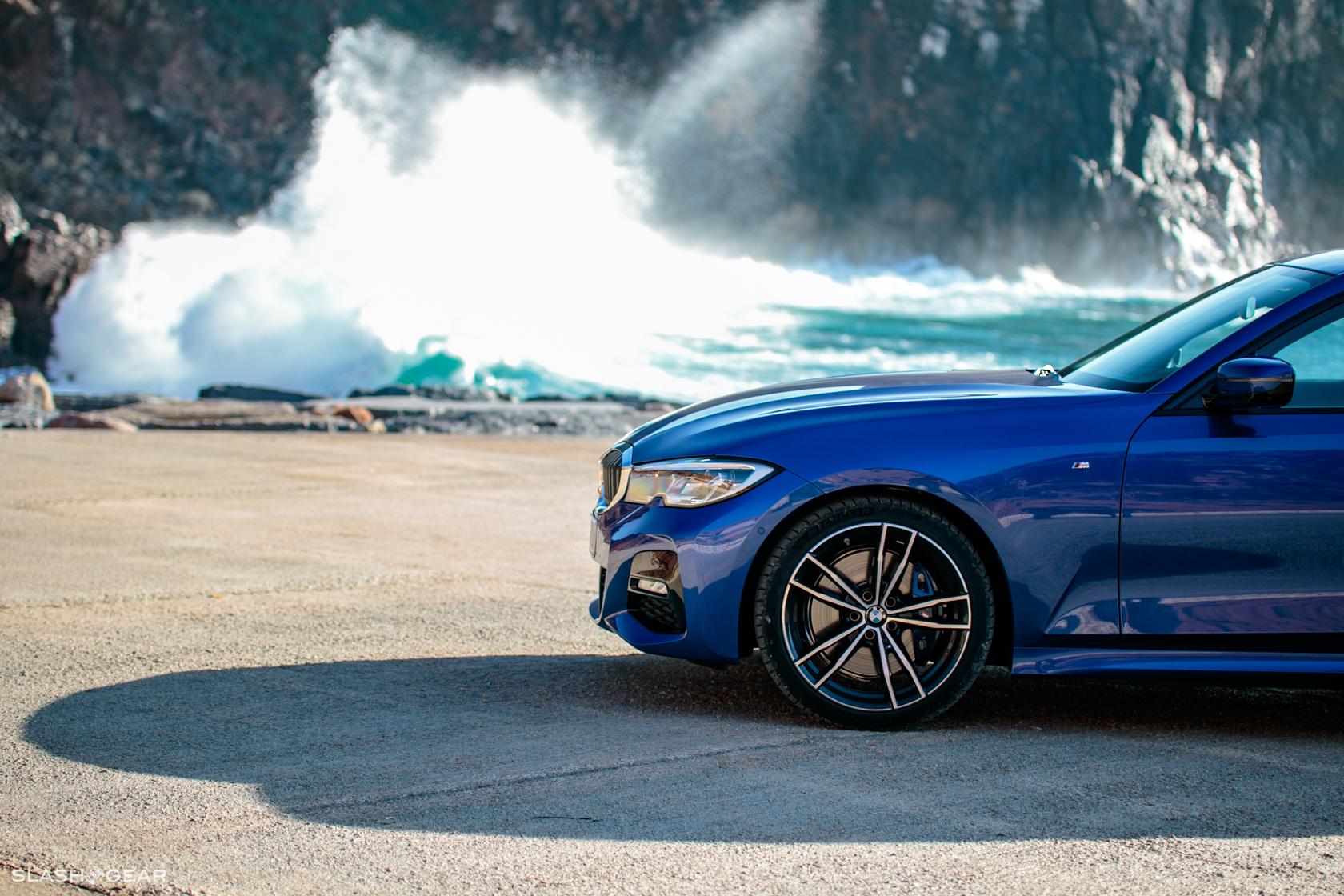 That instinctive, overall polish is the result of a huge amount of work in the car’s development. The engineers’ goal was to optimize BMW’s existing engines, keeping VANOS and Valvetronic, refining the twin-scroll turbochargers and the integrated manifold, and polishing up the engine pulses to better feed the turbos. In the four-cylinder 330i, this resulted in a gain of 7 horsepower and 37 lb-ft of torque, for a total of 255 HP and 295 lb-ft. 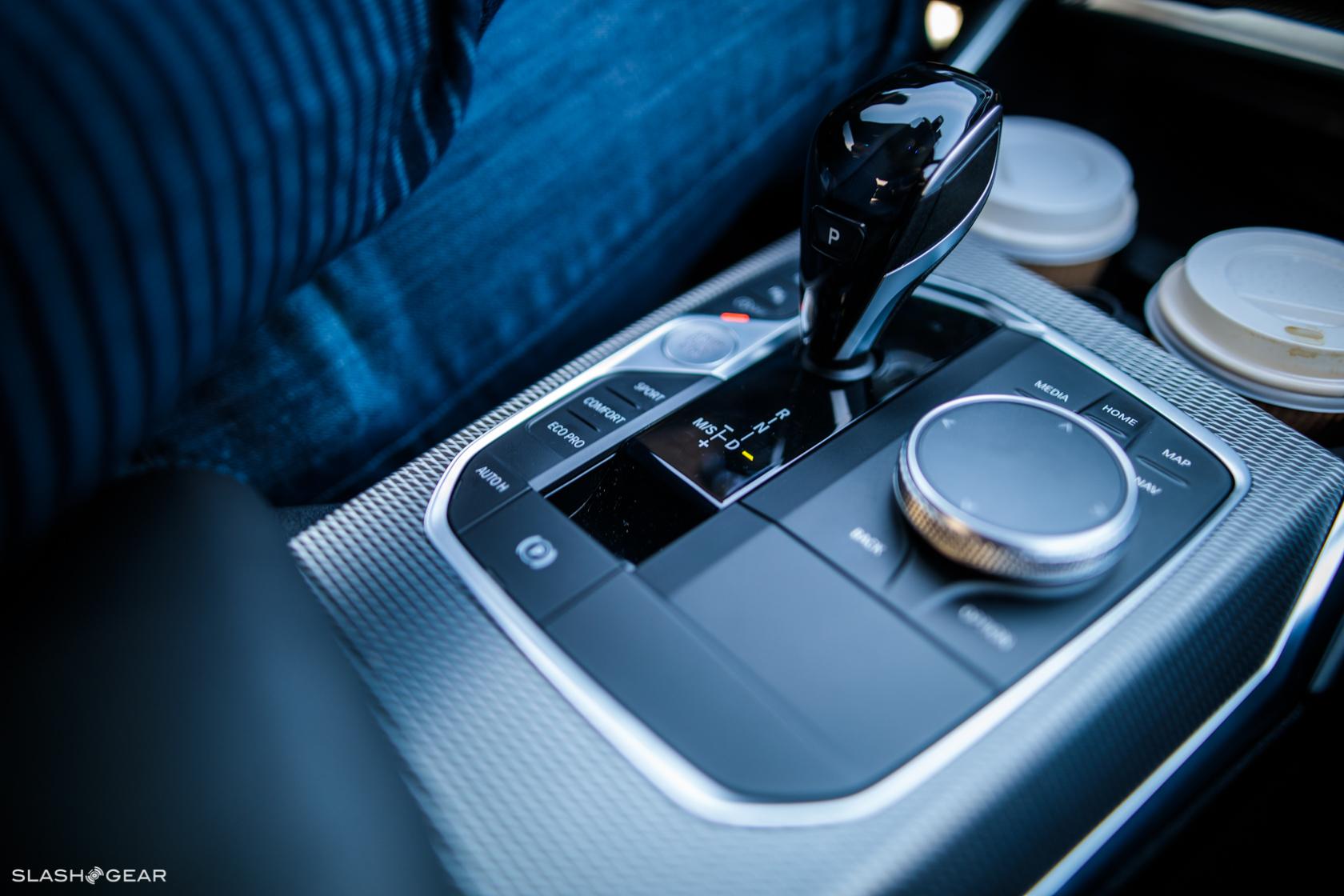 Using similar techniques for the M340i six-cylinder, the engineers were able to reduce the rotating assembly inertia by 25-percent compared to the previous generation. This leads to a 62 horsepower and 39 lb-ft torque increase, for a total of 382 horsepower and 369 lb-ft of torque. This makes for the fastest 3 Series to-date, as I was to discover later.

Both cars use a 3rd generation, 8-speed transmission, which features shorter gearing for lower ratios, shorter shift times, more precise shifts, improved shifting hydraulics, and gearshift optimizations. The engineers have also made improvements to the torsen damping system, to help remove vibrations and remove distractions from the driver. 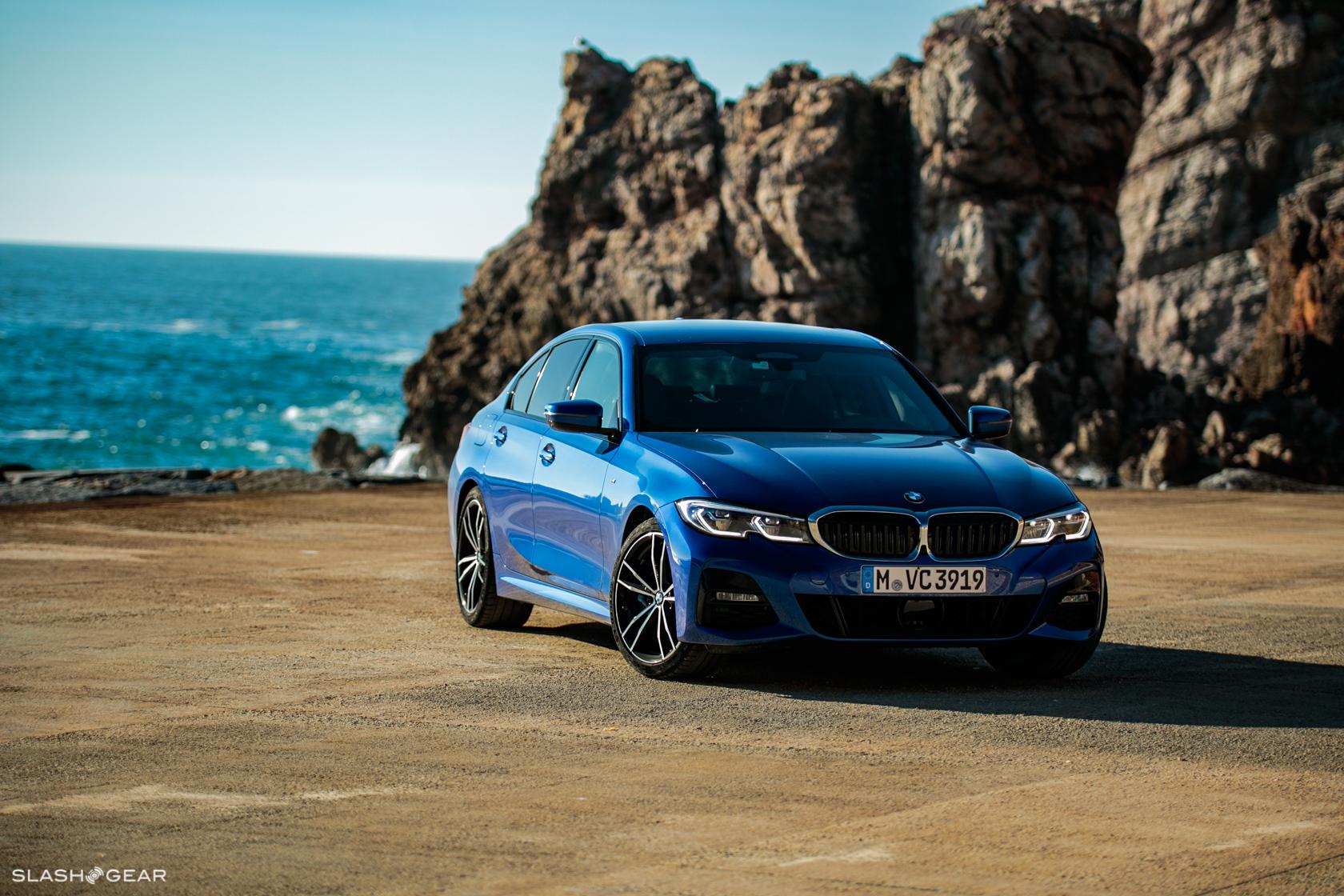 Pointing the kidney shaped grille west, toward the ocean, it was time to hit the highway to not only get a feel for the car where it will be used the most, but to also take in some spectacular views. The 330i is just as great on the highway as it is on the mountain roads. It accelerates to pass effortlessly, and the steering reacts just as well to lane changes as it does tight turns. Off the highway, the roads quickly turned into narrow twisty roads and eventually transitioned from pavement to dirt. Something you would expect for a small beachside community, slowing us down until we could pause to take in views that were absolutely stunning. 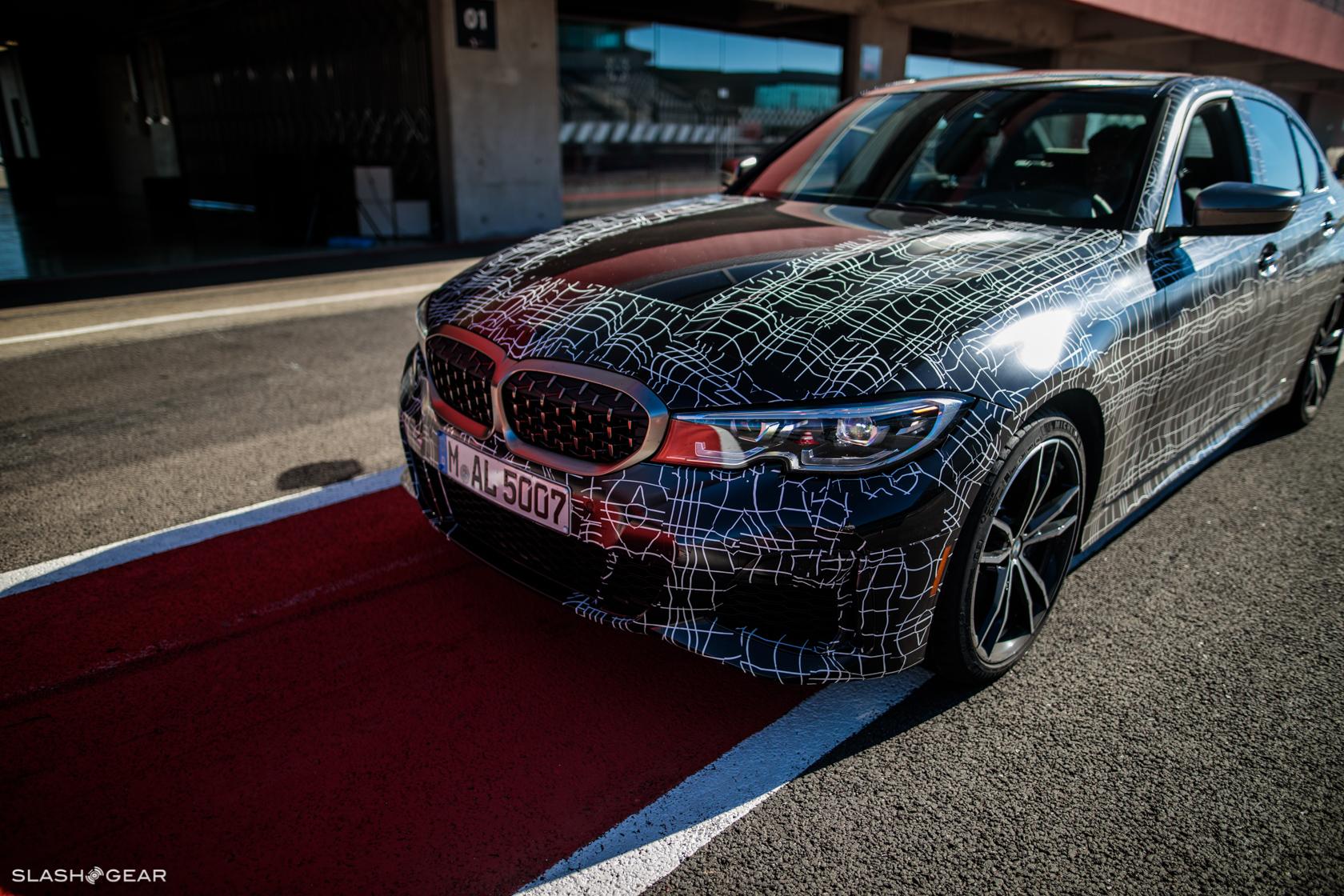 The next day would make for a totally different experience. Our destination would be the Autodromo Internacional do Algarve (Portimao). My drive partner and I decided to make our own route through Lagos, and stop and enjoy a cappuccino at a tiny cafe overlooking the ocean, BMW’s stunning blue paintwork holding its own against the natural beauty. Only a pitstop, of course, since there was a camouflage-clad prototype 2020 M340i awaiting us at the track.

For all my enthusiasm about the 330i M Sport, the M340i was the car that I was really excited to drive. On paper, it reads like a detuned M3 with xDrive, and I couldn’t wait to get behind the wheel and see if it could hold up to those expectations. 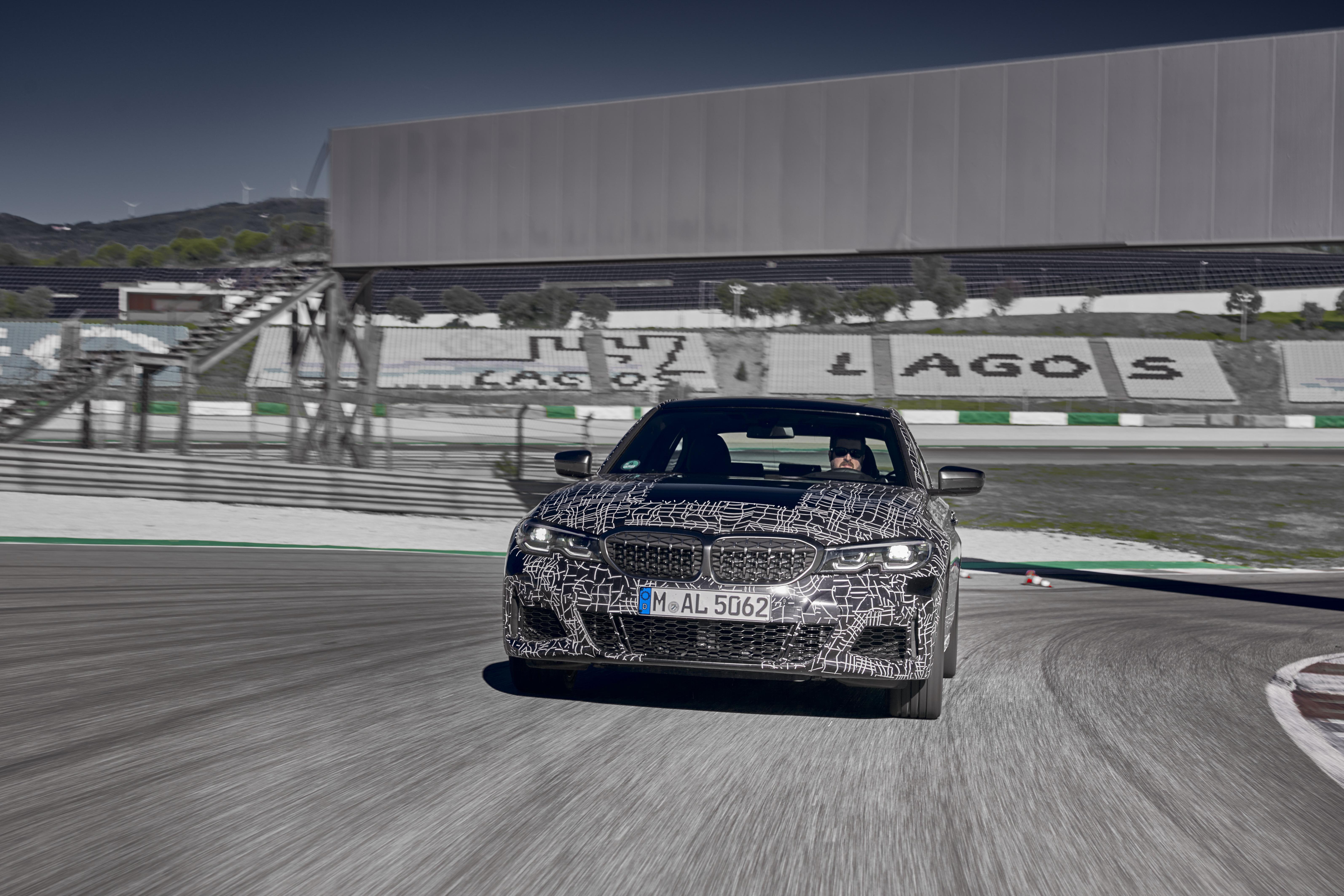 We broke up into groups of three, and had an instructor leading the way. Mine would be former Formula 1 driver and current BMW DTM Driver Timo Glock. Getting into the M340i and starting it up, you are immediately greeted with a totally different sound. Again, we would start out in Comfort mode for the first lap, with traction control on. Timo started out at an easy pace, but on the next lap I switched to Sport as we started pushing the cars even harder, allowing them to slide out of the turns.

The xDrive badge may be there, but it did not feel like these cars had all-wheel-drive – in the best possible, purist-pleasing way. In fact I was totally blown away by how much fun this car is. Switching to Sport+ allowed even more slip, and even drifting, with minimal effort. The suspension kept the car well settled, and the steering was so precise. It’s tough to believe that this is not a full M car. 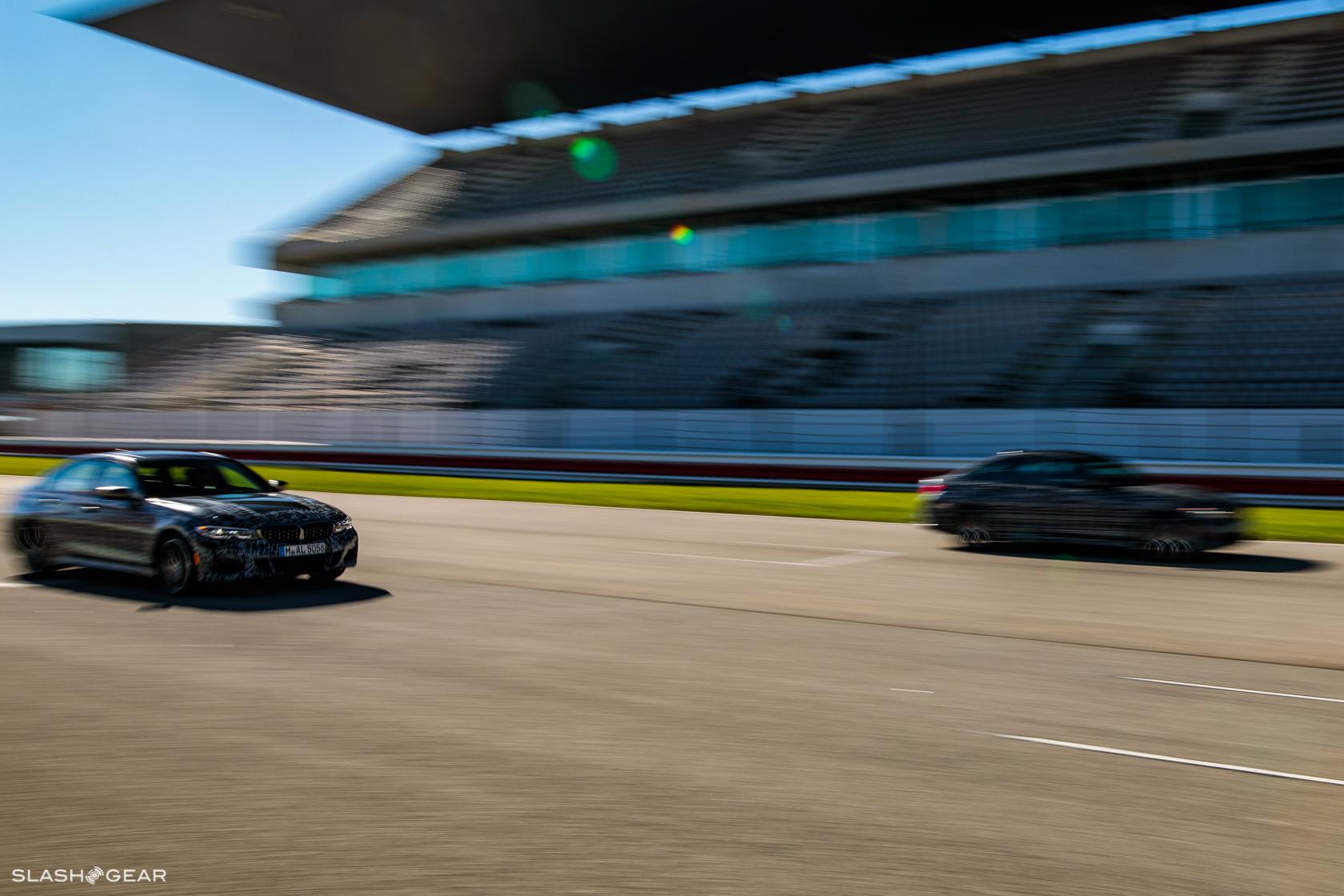 After crossing the start/finish line, I fell back and switched places with the car behind me. It was astonishing to watch the M340i keeping pace with the M2 Competition pace car; even Timo later admitted that he hasn’t been sure that it would be possible. The driver in front of me even managed to find his limit, and the car reacted much better than I expected. He was easily able to get it back under control and continue on.

Final lap behind Timo, and I noticed that – even after four laps of very hard braking – there was no sign of any fade. The Michelin Pilot Sport 4S Tires seemed like the perfect match for the car. I walked away immediately thinking that if you are looking for a sports sedan, this is definitely the one to consider. With pricing starting at $54,995 for the sDrive, and $56,995 for the xDrive, there won’t be much in the category that can touch it – all the more impressive considering these are still prototype cars. 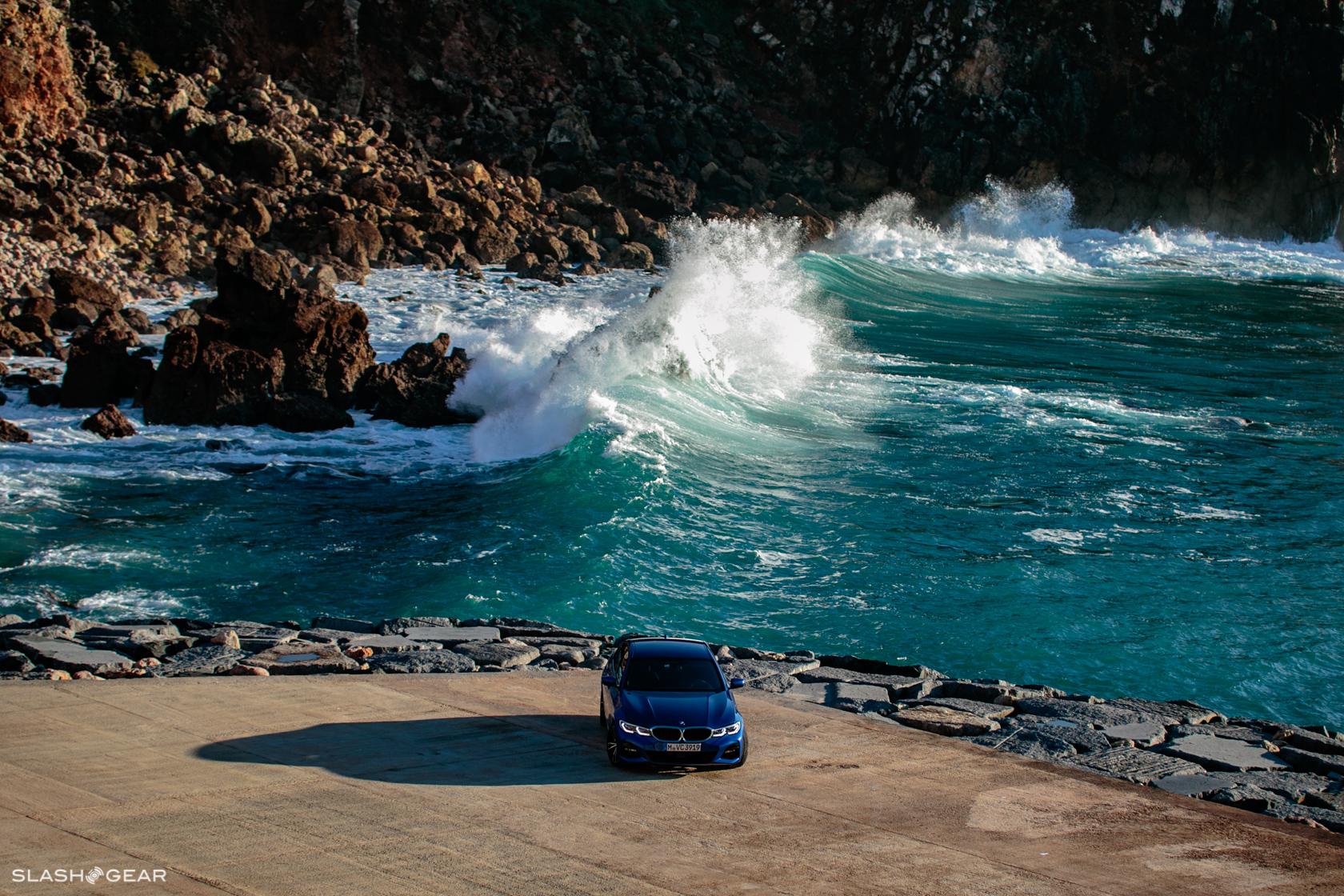 It’s not hard to get the impression that everyone involved with the new 3 Series set out with a goal of bringing it back to what BMW enthusiasts expect from the brand. There’s no shortage of technology here, too, such as a new BMW voice activated assistant that can control the temperature and help you navigate, along with motion-sensing radio controls and a really great sounding audio system.

To me, though, all of that comes second to just how great the car drives. The purest of the 3 Series purists will likely complain that, when it arrives in America, it will be missing the manual transmission option. Still, that’s just about the only negative thing I could say about the car when I grudgingly handed the keys back. Welcome home, 3 Series, we’ve missed you.