With over 1.1 million sold since its introduction in 2012, the Audi Q3 has been an essential vehicle for introducing consumers to the Audi brand. Even with its much later introduction to the US, in 2015, delayed access would only turn out to whet the appetite of American drivers. No, it wasn’t as technologically advanced as other Audis on the dealers’ lots, and yes, it was using the older generation of engines and transmissions, not to mention the old infotainment system. Turns out, such things didn’t cross consumers’ minds while shopping. Audi was thinking about it, though, and so we get the all-new 2019 Q3.

With its US launch not expected until next year, Audi invited us to the incredibly beautiful Bolzano, Italy to try out the new Q3. Tucked into the Dolomites of North East Italy, its peaks and valleys are good enough for the Italian Alpini, the elite mountain warfare corps, and so they’d be good enough for putting the 2019 Q3 through its paces. That its one of the most beautiful places in Europe only sweetened the deal. 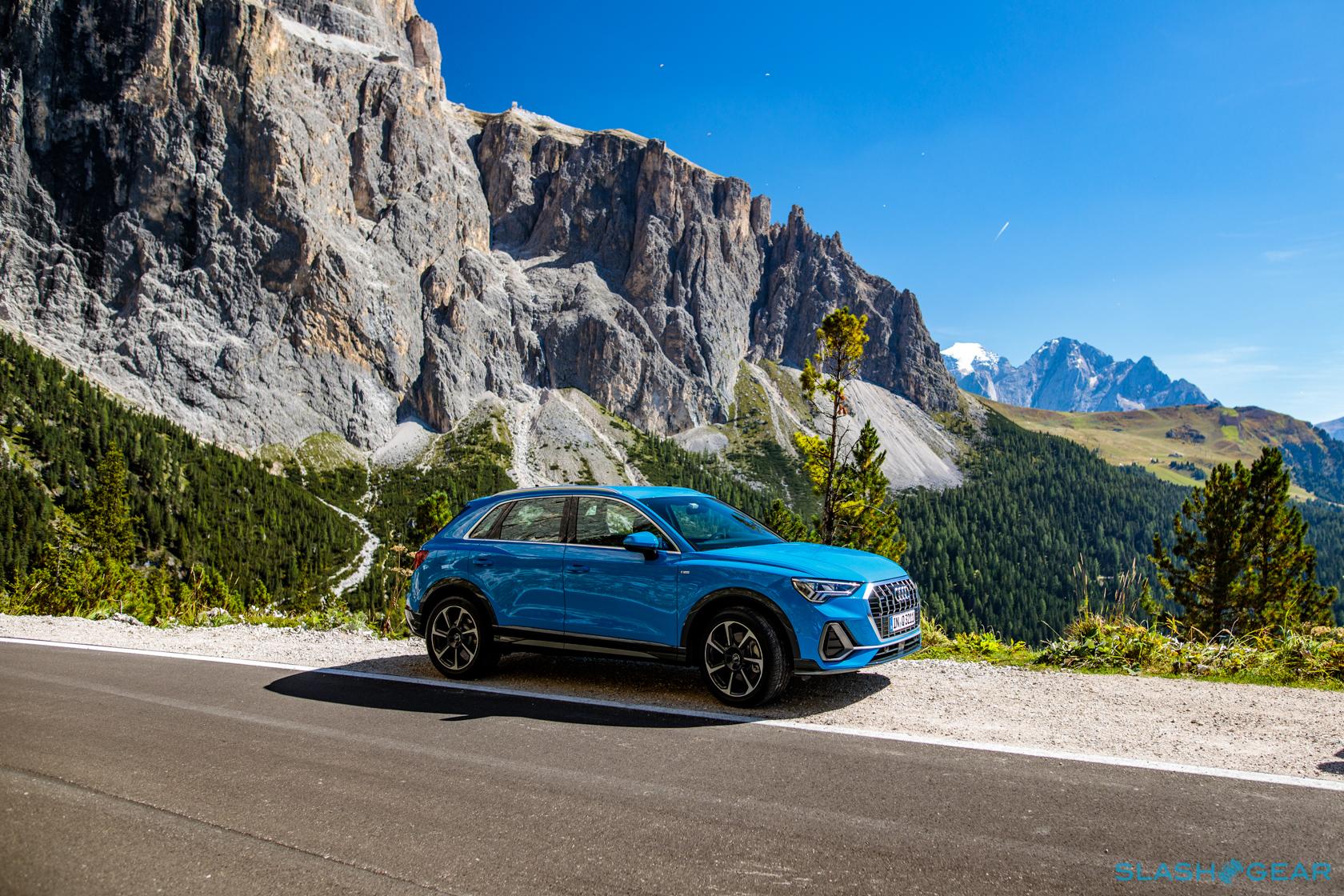 The 120 kilometer drive would take us off the highway and through Wolkenstein in Gröden or Selva di Val Gardena in the Val Gardena in South Tyrol, Northern Italy. It’s a very interesting part of Italy, as it’s autonomous: the majority of the population speaks German, even though it has been part of Italy since the end of World War I. The German-speaking part of the community still identifies as Austrian, indeed, while the food is a wonderful mix of all the local cultures.

As you’d hope, the scenery and roads are just as incredible, but Audi’s choice wasn’t made just for the postcard selection. Huge changes in elevation, along with twisting paths and blind corners represent some of the toughest challenges around for a new car. The 2019 Q3 would have its work cut out for it. 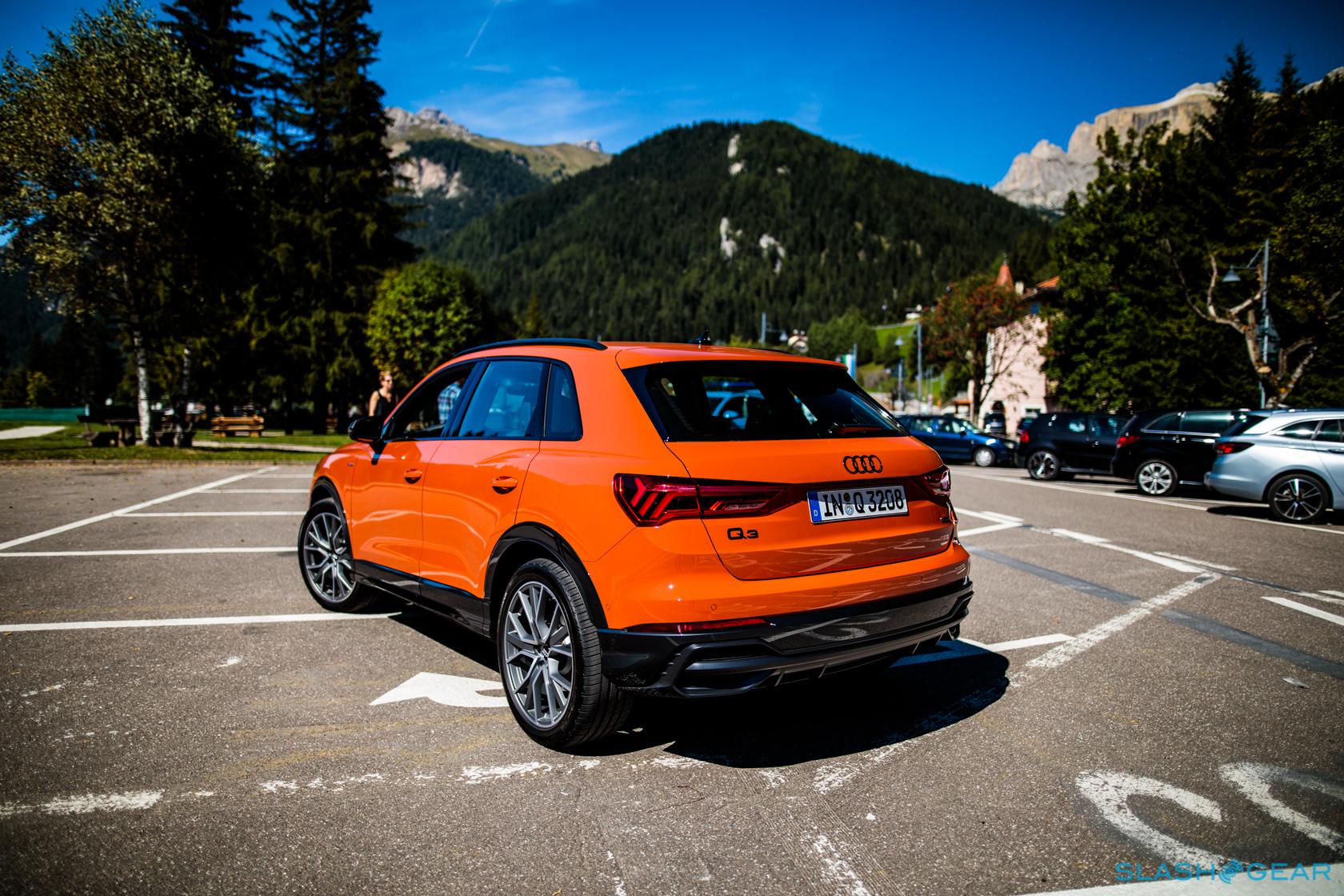 We started our day at the My Arbor hotel, perched high over the valley. The winding roads from the hotel to the village below to the highway would be our first taste of the new Q3, and it didn’t take long before I was growing confident in the compact SUV’s abilities. The brakes bite hard, the steering is sharp, and the quick throttle response is very appreciated.

Unlike US cars, which will get Audi’s 8-speed automatic transmission, the Euro-spec Q3 we’d been entrusted with had the automaker’s 7-speed S Tronic gearbox, and the quick up and downshifts are precisely what I expected. The US transmission will have a lot to live up to when it arrives at dealerships. Merging onto the highway, the 228 horsepower 2.0T engine effortlessly accelerates compared to the first model, and the hour-long, 50 km drive to our starting point at Bolzano Airport went by quickly. 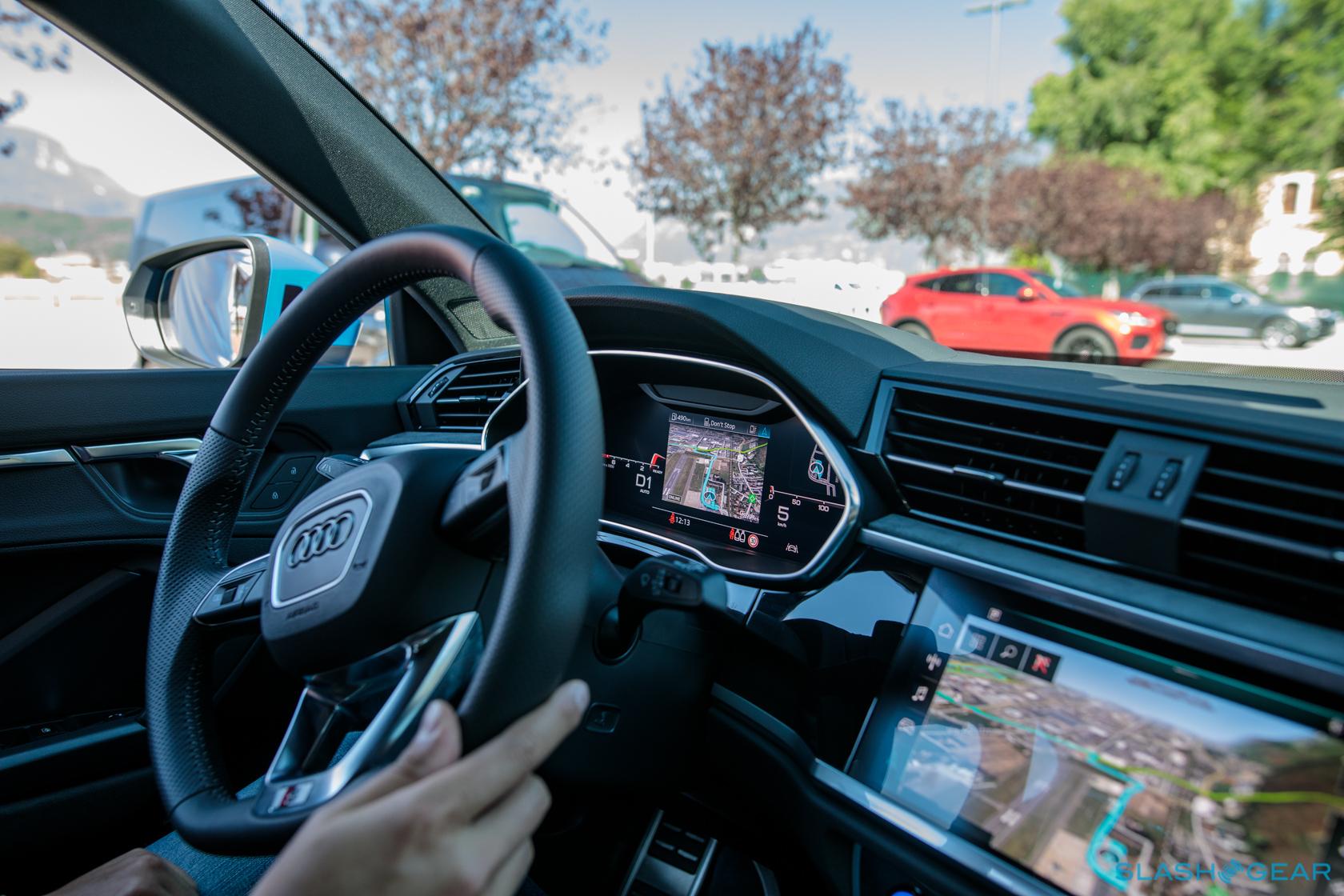 The highways here were constructed through some incredibly old towns, and the sights are beautiful. Trucks and slower cars would generously stick to the right lane, leaving the Q3 to zip right along at the speed limit. After arriving at the airport, it was time for a stint on the highway at the edge of the city.

While it’s likely to be a frequent stomping ground for American drivers, I can’t say I was disappointed when we turned off the highway towards Wolkenstein. Within a few kilometers, we were in the forest and passing through typical European tunnels on our way to the first stop. The views kept getting better, and so did my impressions of the Q3. Quiet in the cabin, and offering no complaints at our route, it proved just as relaxing when I took over passenger duties and had a chance to explore the new interior design. 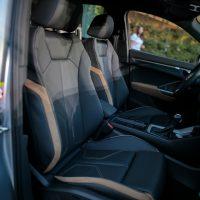 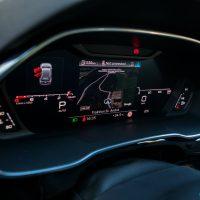 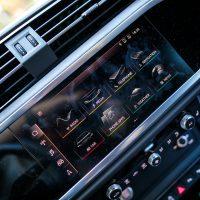 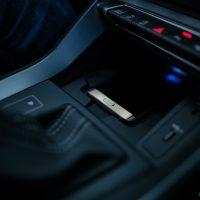 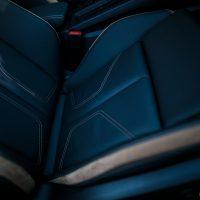 Audi took a clean-sheet approach with the new Q3’s exterior and interior, with nothing carried over from the previous model. It’s not been miserly with the technology, either: it may be small, but the 2019 Q3 gets the best of the connectivity options and driver assistance systems that debuted in the new Audi A8. The MMI radio plus a digital instrument cluster is now standard, with the speedometer and tachometer now digital. Sandwiched in-between them is navigation, entertainment, and other vehicle information. Unlike the Audi Virtual Cockpit we’re familiar with, though, this version for the Q3 doesn’t have an adjustable layout. 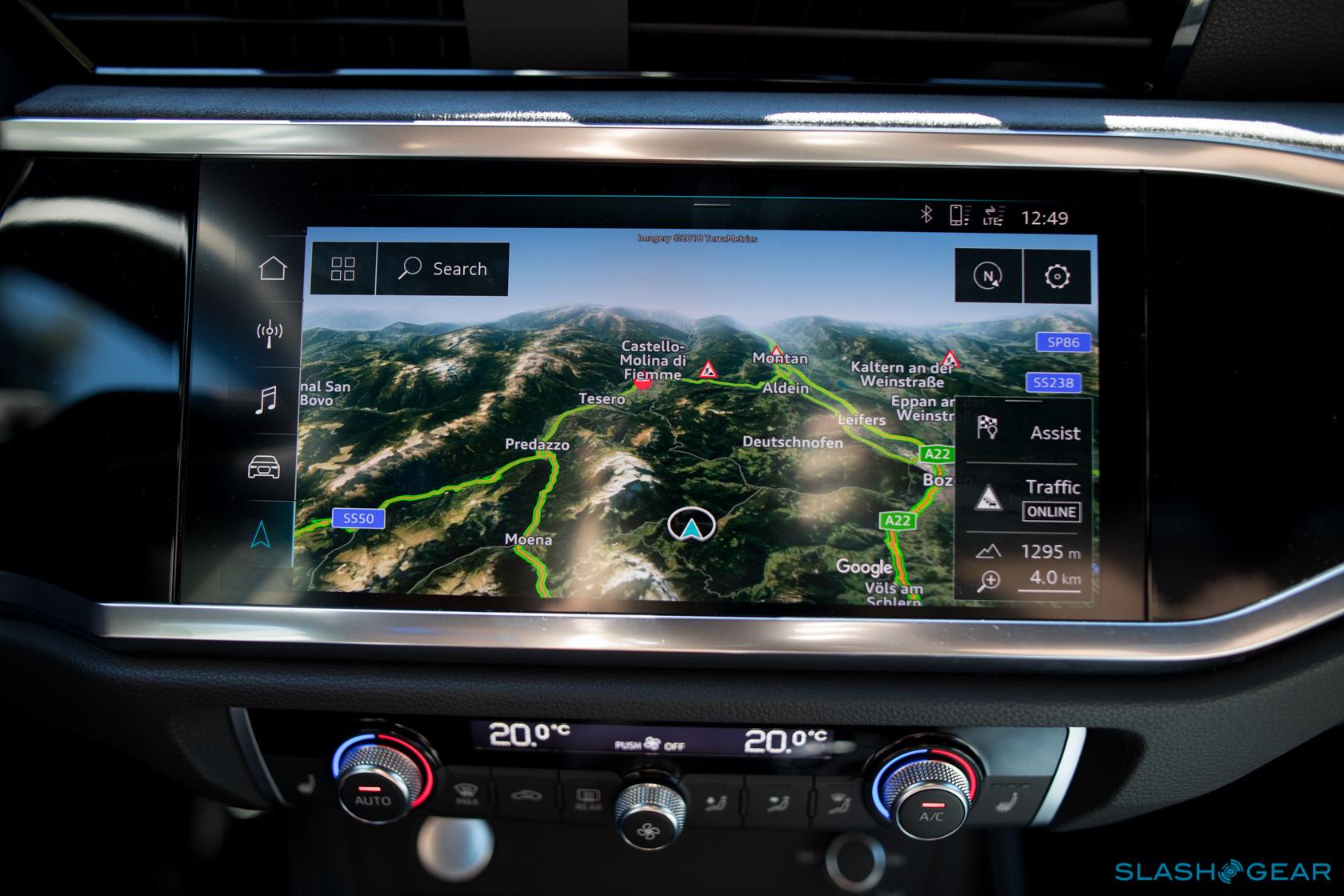 A second, 8.8-inch screen is found on the center stack, where you interact with the optional MMI navigation plus infotainment system. That features a new – but familiar – flat menu structure, along with natural-language voice control and online route calculation powered by HERE. MMI navigation plus is an option, with the full 12.3-inch Virtual Cockpit display and an all-new 10.25-inch MMI touch display on the center console, mounted at a 10-degree angle so as to better face the driver.

It’s not the only tech upgrade worth noting. There’s now USB-C and USB 3.0 ports, located just behind the gear shifter, as Audi embraces the latest smartphone connectivity type. Audi Connect with LTE Advanced will also be an option, including WiFi hotspot support, along with the latest Car-to-X services. That will allow similarly-equipped vehicles to report when they’re moving in and out of parking spaces, so that vacant roadside spaces will be highlighted in many towns and cities. The cars from the swarm also warn each other of dangerous spots, such as fog or black-ice, and report current speed limits. 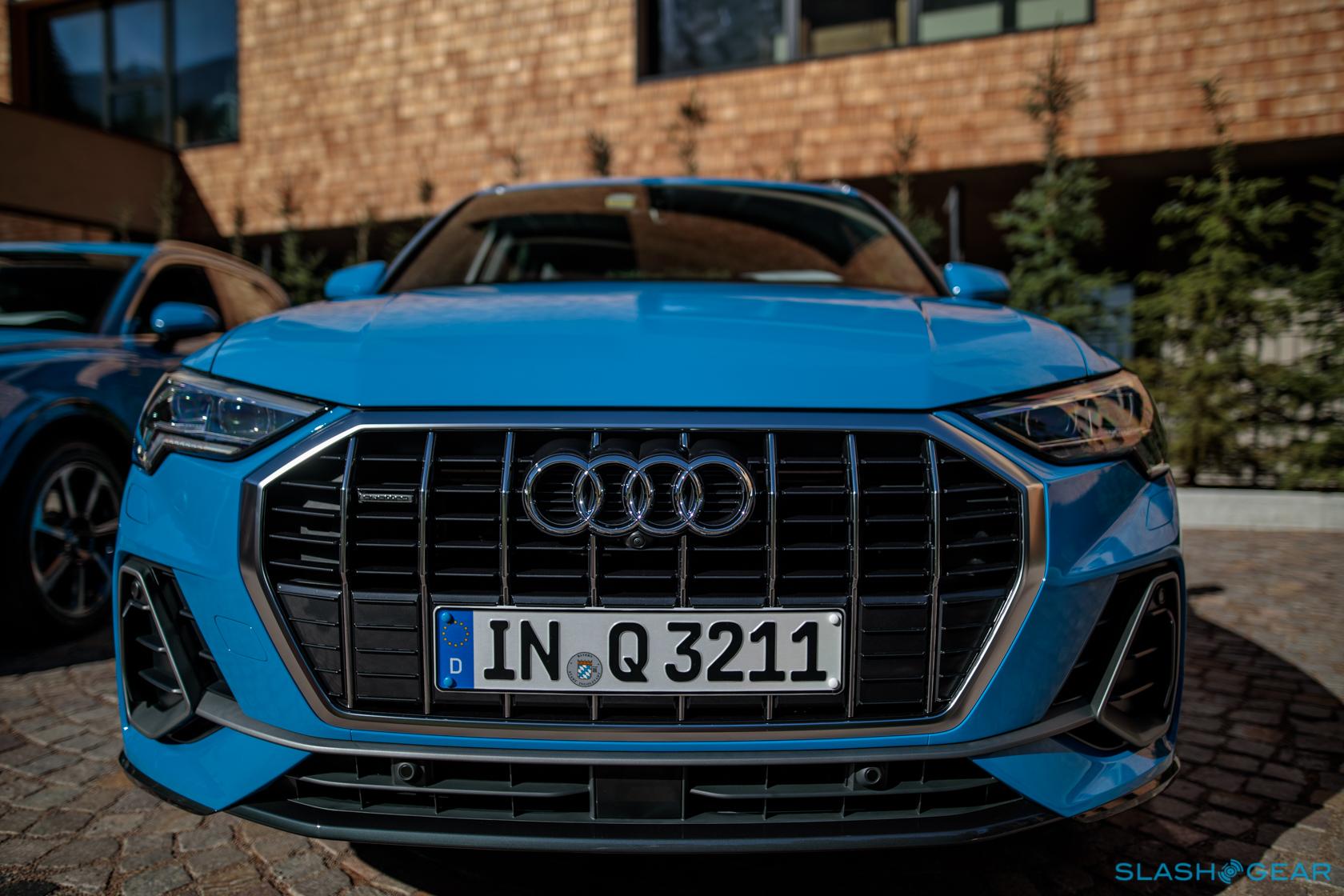 Finally, there’ll be the highest tier, Audi Connect Navigation & Infotainment plus with Google Earth, a hybrid radio, as well as online and onboard dual voice control system. Along with the LTE Advanced and Plus packages comes the myAudi app, which allows many of the vehicle’s functions to be controlled from a distance, and you can also unlock the doors with just your phone. The Audi phone box can both wirelessly charge your phone and boost its cell signal, while the Audi smartphone interface adds Apple CarPlay and Android Auto. Finally, there’s a sweet-sounding Bang & Olufsen 3D Sound System with 15 speakers.

It was hard to believe, in fact, that this was an entry-level Audi as it felt just as refined as its many higher-end siblings. The interior features the same, taut lines as the exterior, and can be finished in some very nice soft touch materials like Alcantara. The piano black trim is borrowed from the A8, and gives the Q3 a suitably upscale feeling, while the new S Line sport seats are very comfortable and provide excellent support, something we appreciated after a full day of driving. 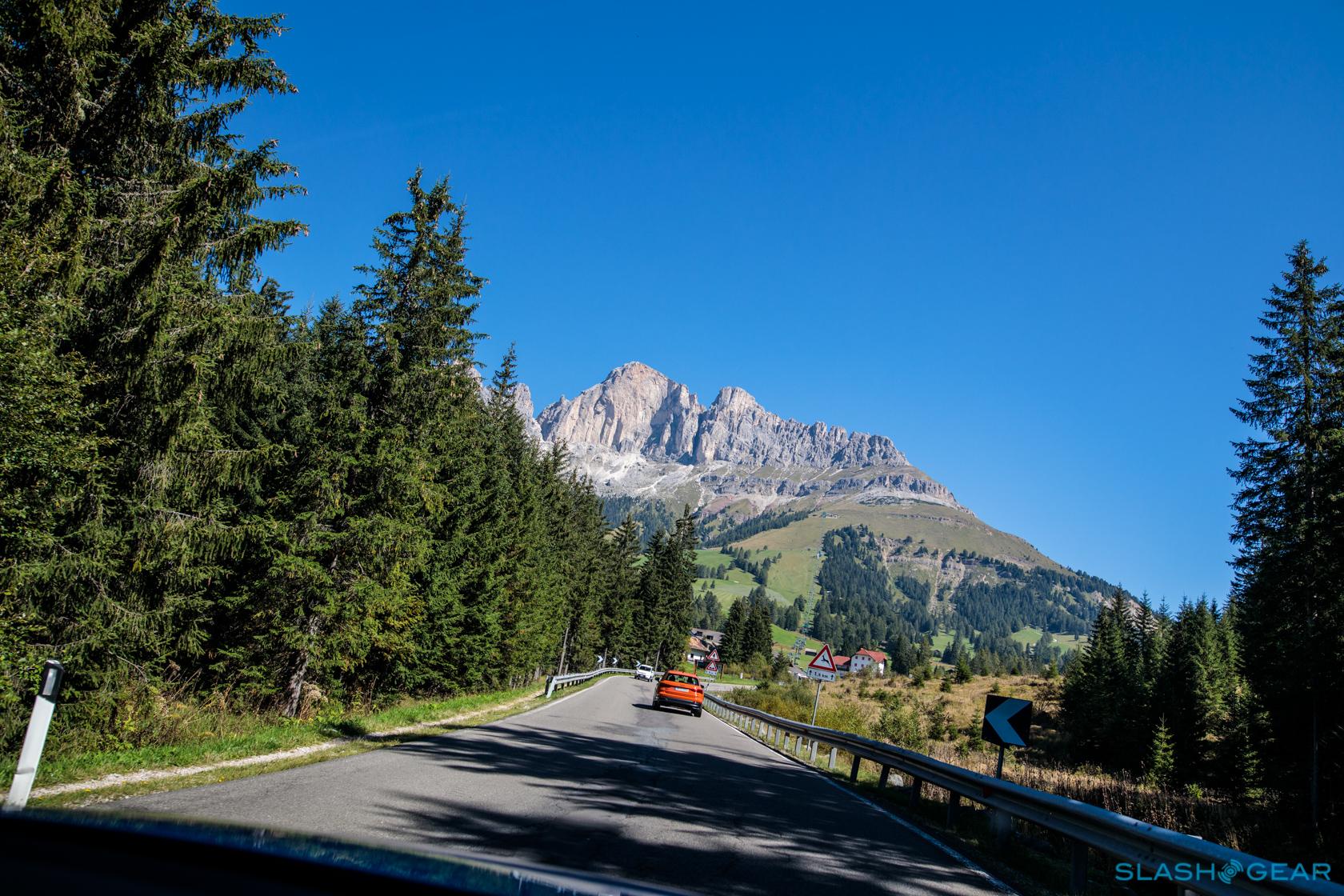 As our first stop loomed, an incredible tree-framed view of the mountains, with a beautiful blue lake that you could see to the bottom of did its best to distract me from my turn behind the wheel again. As we got closer to the town, though, traffic picked up, and it was time to try out the new adaptive cruise control. 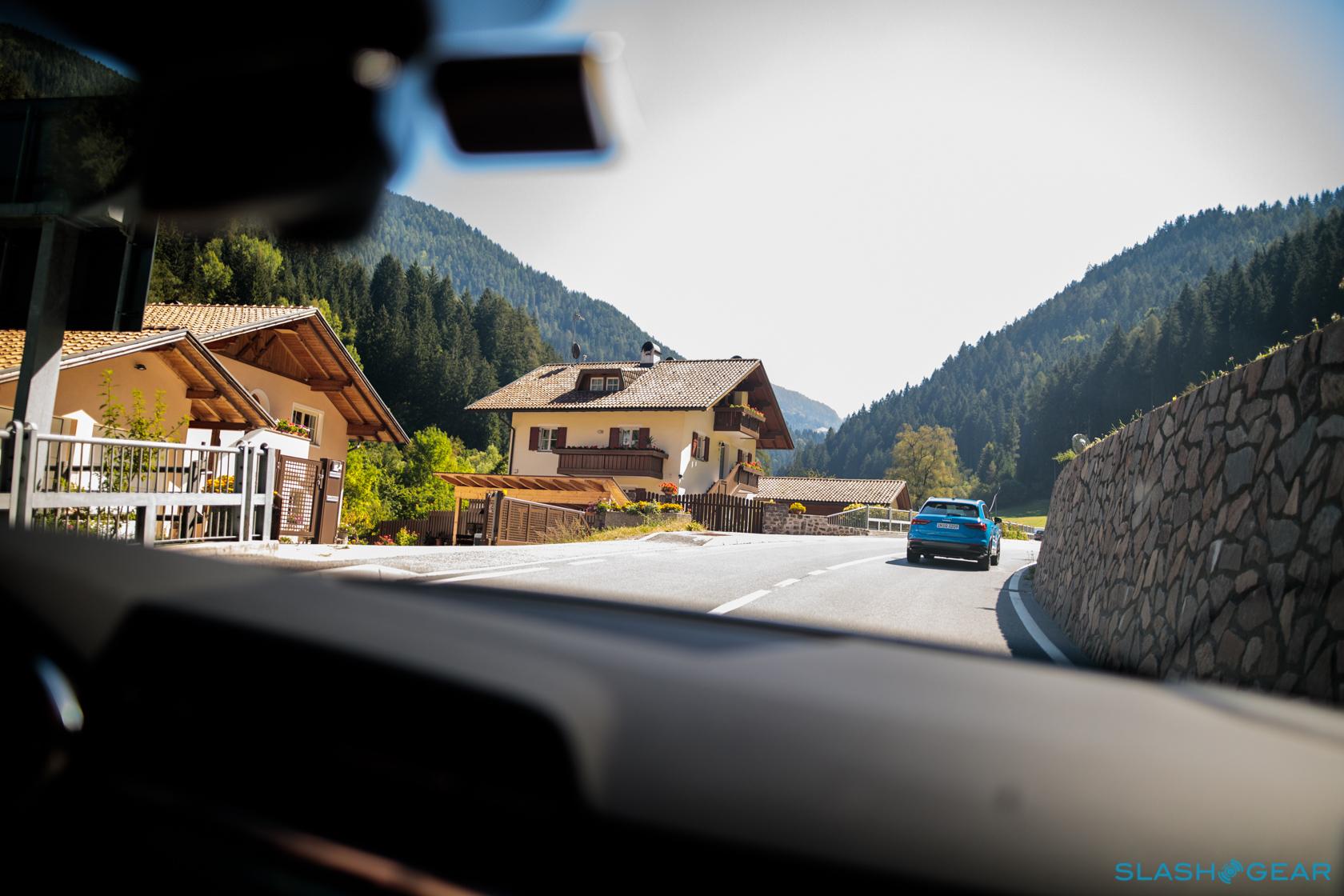 In short, the idea is to not only keep you at a safe distance from the vehicle ahead, but make sure you stay in the lane, too. A button at the top of the cruise control stalk allows you to set the maximum speed based on the speed limit automatically, or you can manually override that with the normal up and down motion. On the highway sections I set the speed limit and distance limits, kept both hands on the wheel, but let the Q3 do the rest. After you come to a complete stop, the Q3 will accelerate again automatically.

While there’ll be an array of engines offered worldwide, including diesels, I was able to confirm the two engine options for North America. In the US there’ll be the 2019 Q3 quattro with a 2.0-liter turbocharged four-cylinder delivering 184 horsepower and 236 lb-ft of torque; it’ll do 0-60 mph in 7.4 seconds. The second version will be the 2019 Q3 quattro S Line, with 228 horsepower and 258 lb-ft of torque, enough to cut the 0-60 time to 6.3 seconds. quattro all-wheel drive will be standard, along with the 8-Speed automatic transmission. 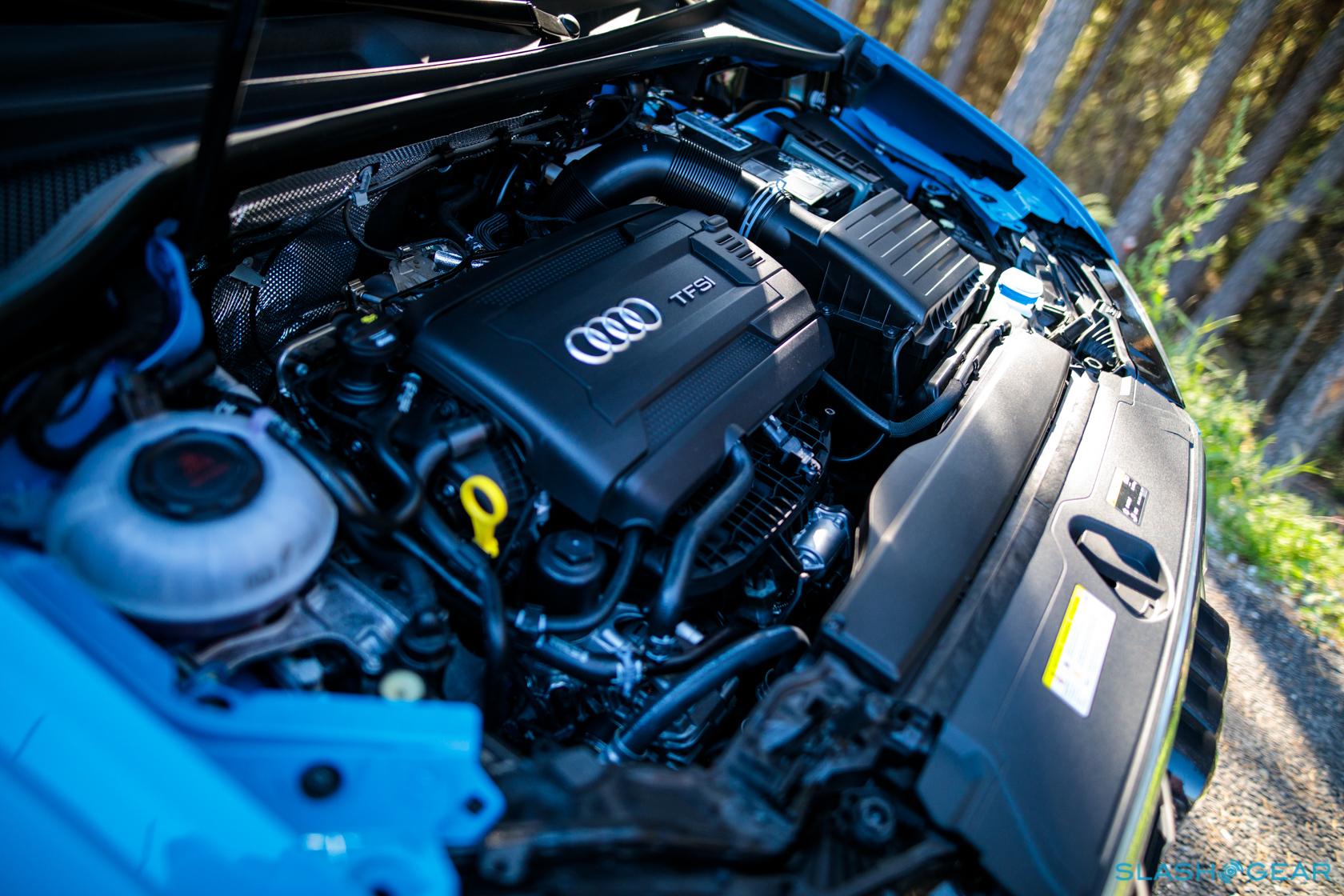 There’ll be Standard, Sport, and an optional damping suspension system, which relies on sensors continuously measuring the Q3’s body movements. The dampers then adjust to the road conditions and driving situation. The amount of damping can be configured via Drive Select, which is where you find various driving modes, like Dynamic and Comfort.

As we made it to the center of town, I switched off the adaptive cruise and turned off toward the mountains. Climbing up through some incredible mountain roads, snaking their way higher and higher, as we rose the trees dropped away to reveal what we could only catch a glimpse of from the valley. The climb to 10,000 feet proved effortless for the Q3, and the quick steering and very responsive engine made easy work of twisty roads. My co-driver and I would switch off again for the journey back to the hotel, where we met up with Matt Baggley, the British designer responsible for the exterior design of the new SUV.

At the front, the Q3 features Audi’s new Singleframe grille with its striking, oversized octagonal design. The frame is wide and the slats are vertical, and it’s flanked with the standard LED headlights. Matrix LED headlights will be available as an option, at least in Europe. The extended roof-edge spoiler gives the illusion of the Q3 being much longer, while the sharply-angled D pillars and the crisp shoulder-lines – bulging with the classic quattro blisters – really add to the aggressive look. The intricate headlights and taillights have become the signature of all new Audi models, and the Q3 is no different. The body lines wrapping each have been specifically designed to call attention to the lights, adding to the Q3’s visual identity in the process. 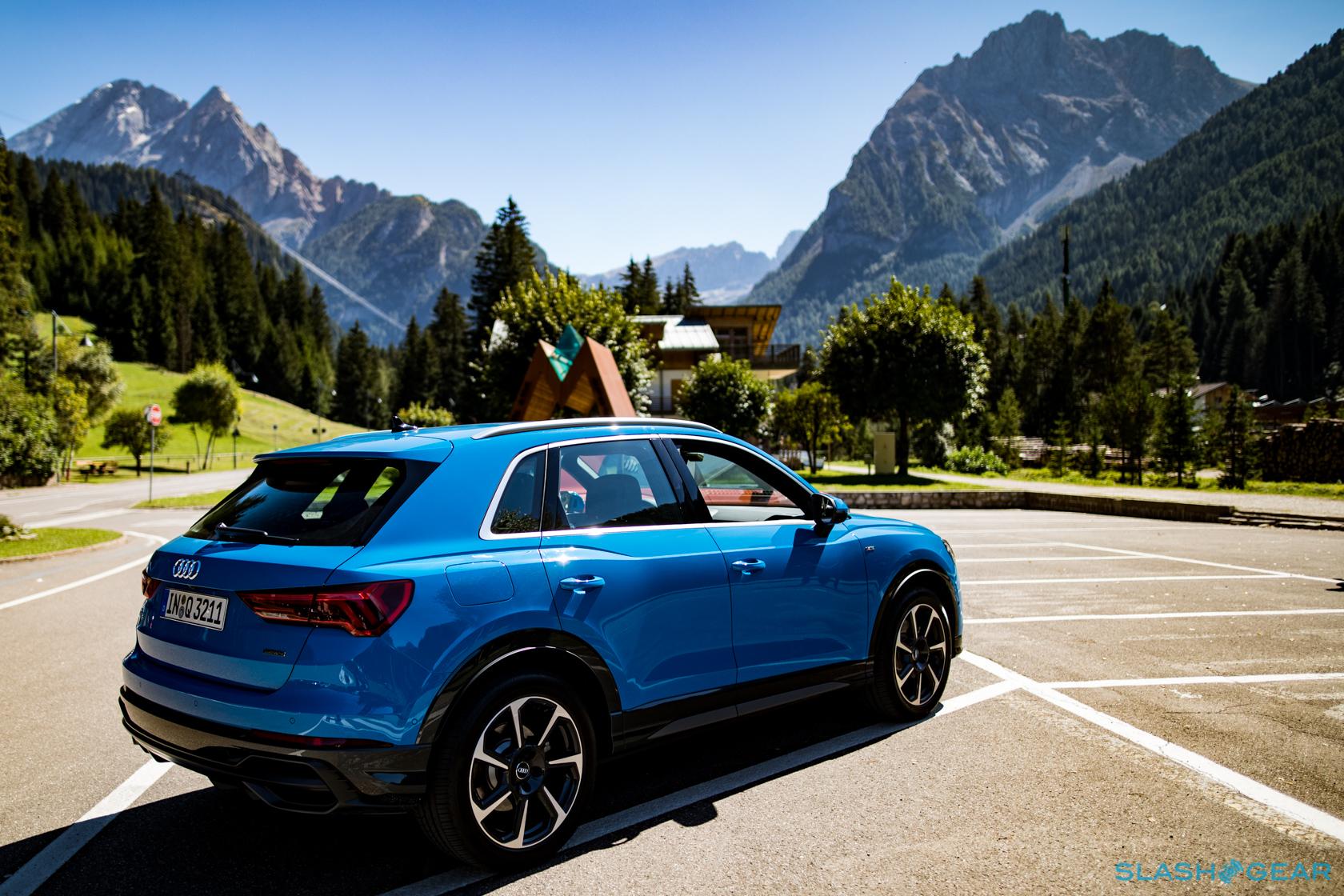 In the trunk, the loading floor can be adjusted at up to three levels, while the parcel shelf can be stowed underneath the floor if not needed. The electric tailgate can also be opened and closed with a kicking motion for hands-free access. Much of this we’ve seen before on the Q5 and Q7 SUVs, but they’re welcome additions to a more affordable model. 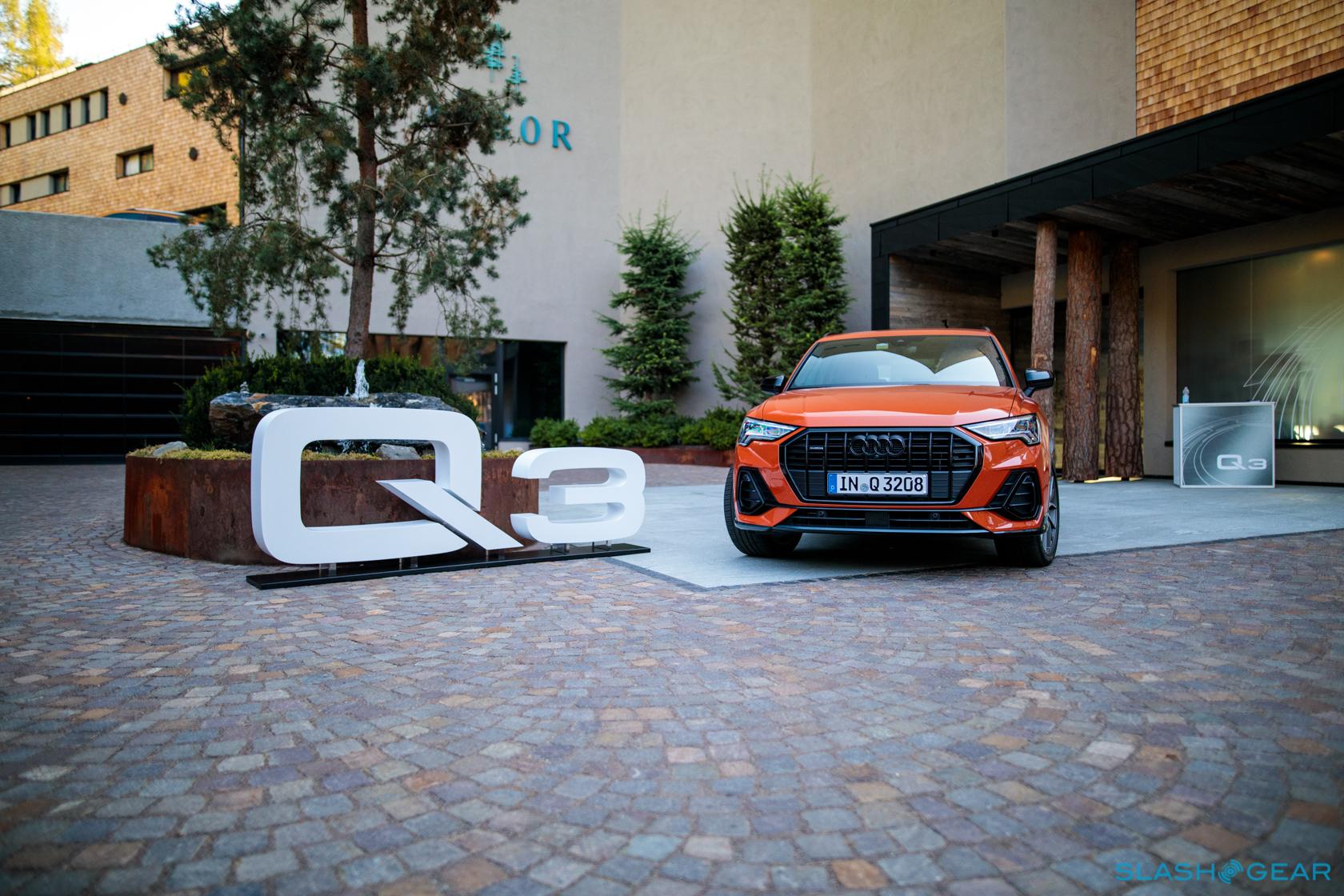 Exactly how affordable, mind, remains to be seen. The 2019 Q3 won’t be on sale for almost a year in North America, and at this point pricing, trim packages, and the options contained in those packages are still undecided. What I can tell you with confidence now, though, is that the new Q3 is an incredibly compelling entry for the driver looking for a fun to drive, entry-level luxury SUV.

Yes, that’s a mouthful of a category, and I do struggle to even call it entry-level as that will be determined predominantly by price. Still, if you can forego the cooled seats and a few other smaller options, the Q3 should also give Audi’s own Q5 a run for its money. In this very busy crossover segment, the new 2019 Q3 certainly left a strong impression on me. Price it right, and Audi should easily sell another million.