It all started with the beautiful Audi Prologue concept unveiled by Audi at the 2014 LA Auto Show. The Prologue heralded the future of Audi exterior and interior design, under the pen and leadership of Marc Lichte. The rounded lines of the past are now strong and aggressive; gone are button-heavy consoles from the interior and, in their place, touchscreens and a handful of necessary keys.

The cars will now bond with their owners and get to know them. The vehicle will greet you, adjust the seat, provide the best route to your destination, and using the latest sensors and safety features get there you there in the utmost safety and comfort. Question is, are the 2019 Audi A6 and A7 worth making friends with? 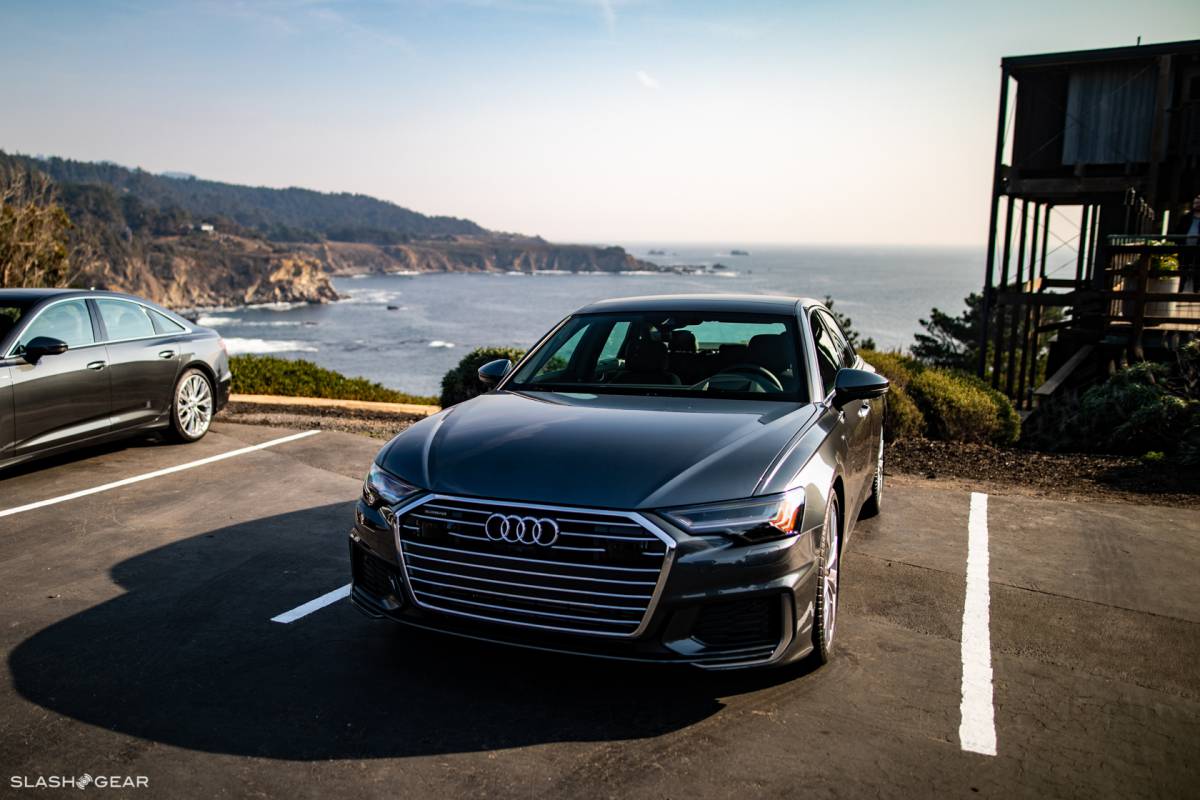 The air is thick across the San Francisco Bay, the landmarks shrouded not by the usual fog, but heavy smoke from the devastating fires raging hundreds of miles away. Heading up over the Golden Gate Bridge, the north tower is barely visible. Once we approach its bright red paint fills the whole of the Audi A6 windshield, only to disappear as quickly as it appeared. 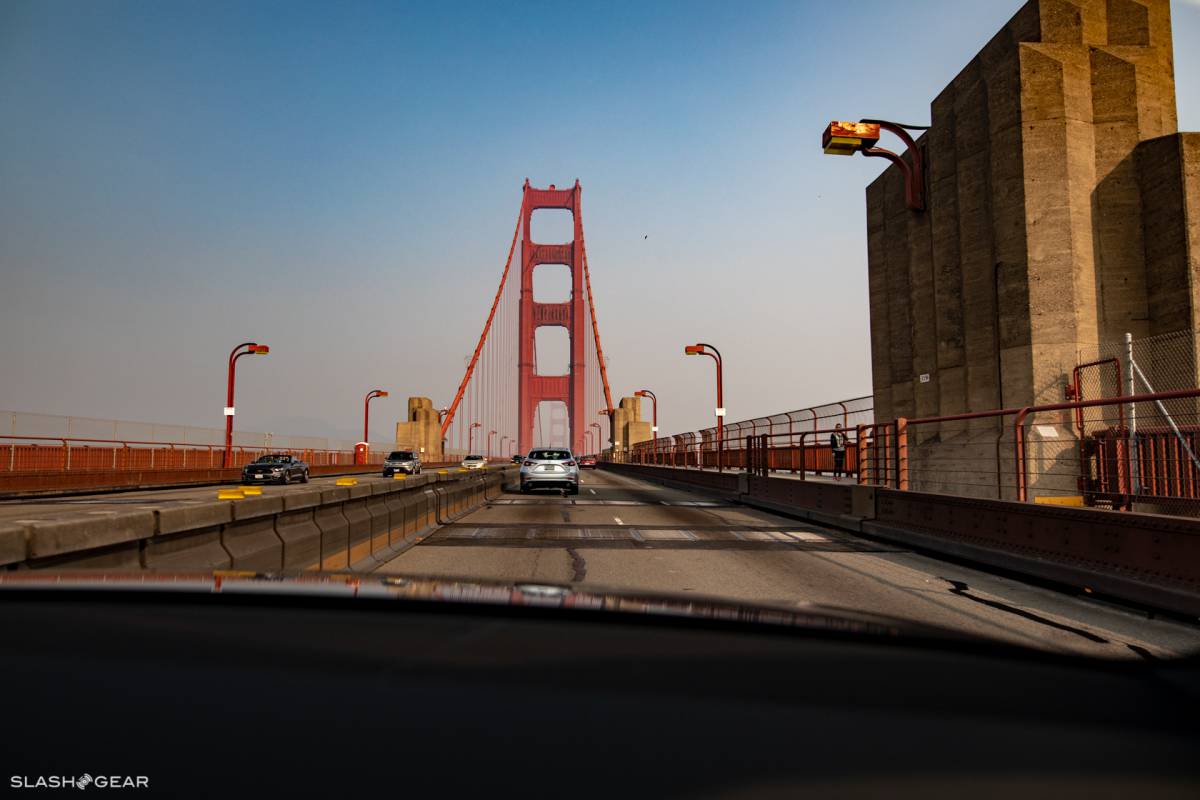 From within the cabin of the latest A6, though, all seems right. The gorgeous new interior is feeding us a steady stream of data from three massive screens; the 18-way adjustable, cooled, and massaging seats keep us relaxed, along with the rest of the beautiful cabin meant to keep the driver and their passengers traveling in luxury. A brief respite from what is happening around us right now.

After leaving San Francisco, our first stop would be just north of Bodega Bay. This is one of my favorite places to drive in the country. The roads carve through the beautiful forests and overlay the land, following the natural paths of the terrain. These roads, which can be in chore in some cars, are quickly consumed by the A6. 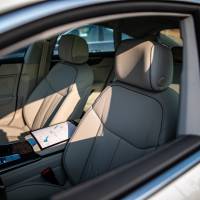 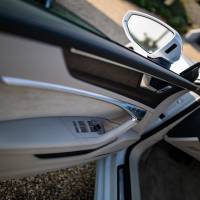 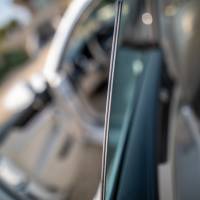 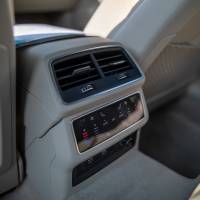 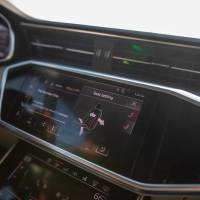 The new 3.0 V6 turbo engine produces plenty of power, 369 lb-ft of torque and 335 hp, and its seven-speed S Tronic transmission is always in the right gear. Tracing the contours of roads like these is a whole lot of fun, even with a car the size of the A6. With no shortage of horses to call upon, the suspension kept the car well planted even through the tightest sections of road. Rear wheel steering will become an option later this year, and I would definitely consider optioning it to increase the fun factor. 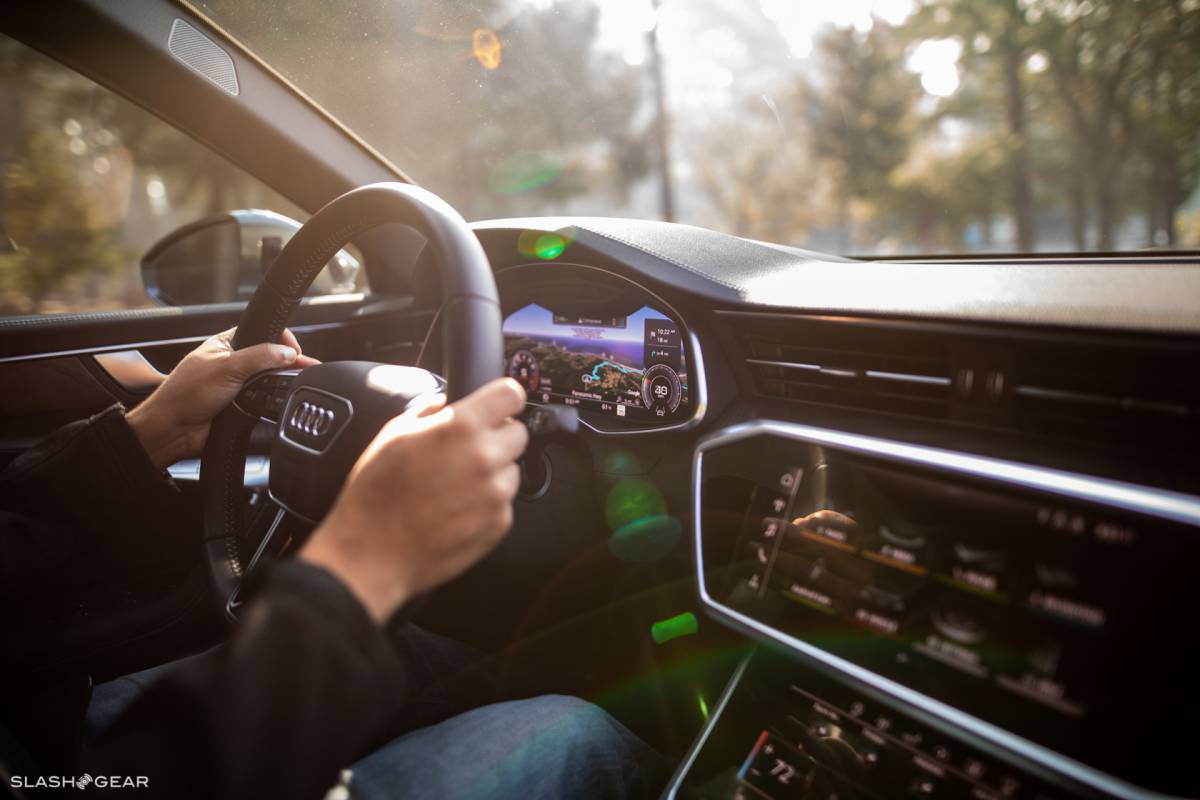 Audi has a lot of experience building athletic executive sedans. The Audi A6 has been constant in the automaker’s lineup since its introduction in 1995. In 1994 the latest generation of the Audi 5000 received a facelift and a new name, fitting in with Audi’ new alphanumeric nomenclature that had launched with the newly-released A8. 25 years later, the A6 continues to be a strong presence in the Audi line-up and a benchmark in its segment. 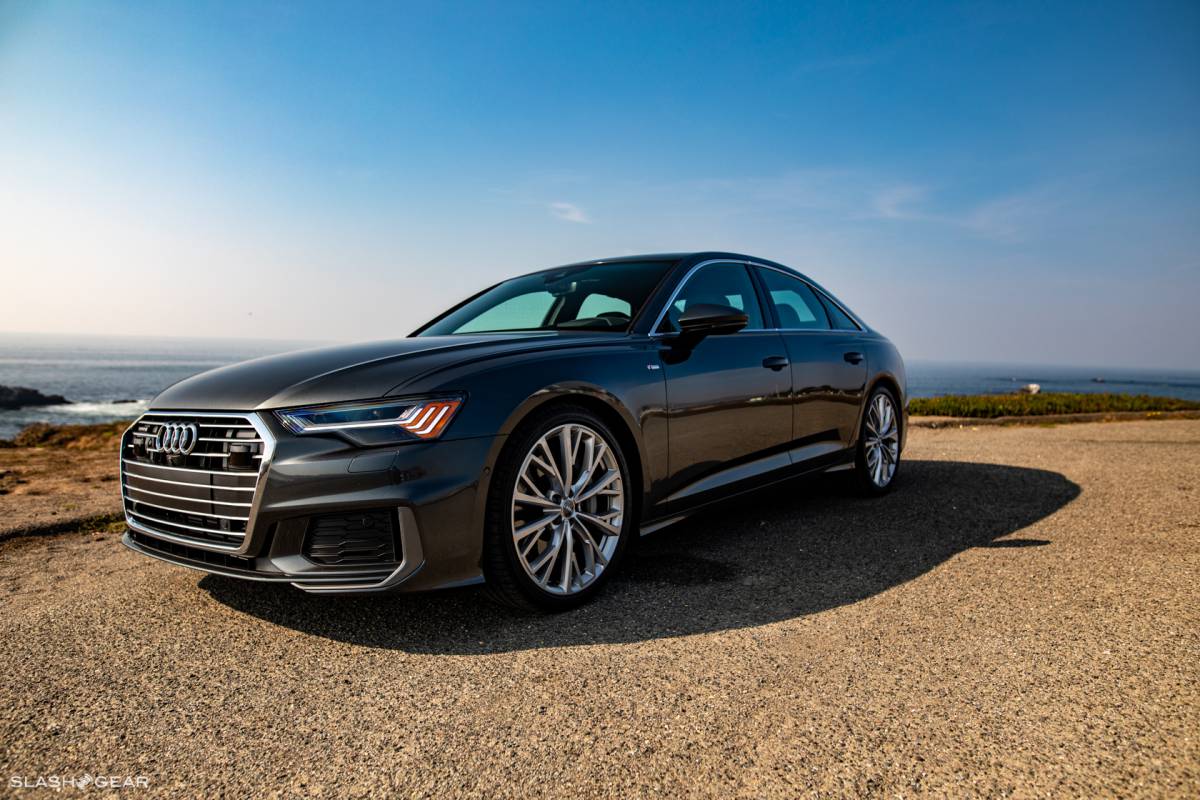 On the final leg driving for the day, our destination would be St Helena. Turning off Highway 1 and onto amazing winding roads through the Napa & Sonoma Valley, the A6 cruised along with ease. The German engineers have always been great at making a big car drive like it’s much smaller. Overall, the new A6 is a nice evolution from the nearly-perfect last generation.

While the A7 is one of the newest vehicles in the Audi portfolio, it needs no introduction. Since its unveiling at the Pinakothek der Moderne in Munich in 2010, it has been an incredibly popular car for Audi. In 2017, the newest iteration of the A7 was revealed not too far away from that original, at Audi’s headquarters in Ingolstadt. The A7 doesn’t need to play catch with the rest of the lineup, utilizing as it does most of the A6 DNA. Between the two, it’s undoubtedly my favorite, with the combination of striking design and yet an unexpectedly-utilitarian rear hatch.

The beautiful Napa Valley is the perfect location to showcase the all-new Audi A7. We were lucky enough to be able to spend the morning driving with the exterior designer of the car Sebastiano Russo. I had first meet Sebastiano inside the Audi Design Center, where we traveled through the design process inside of Audi. Within Audi design, this is a competition where the designers all submit their concepts, and a committee votes on which design will move into production. 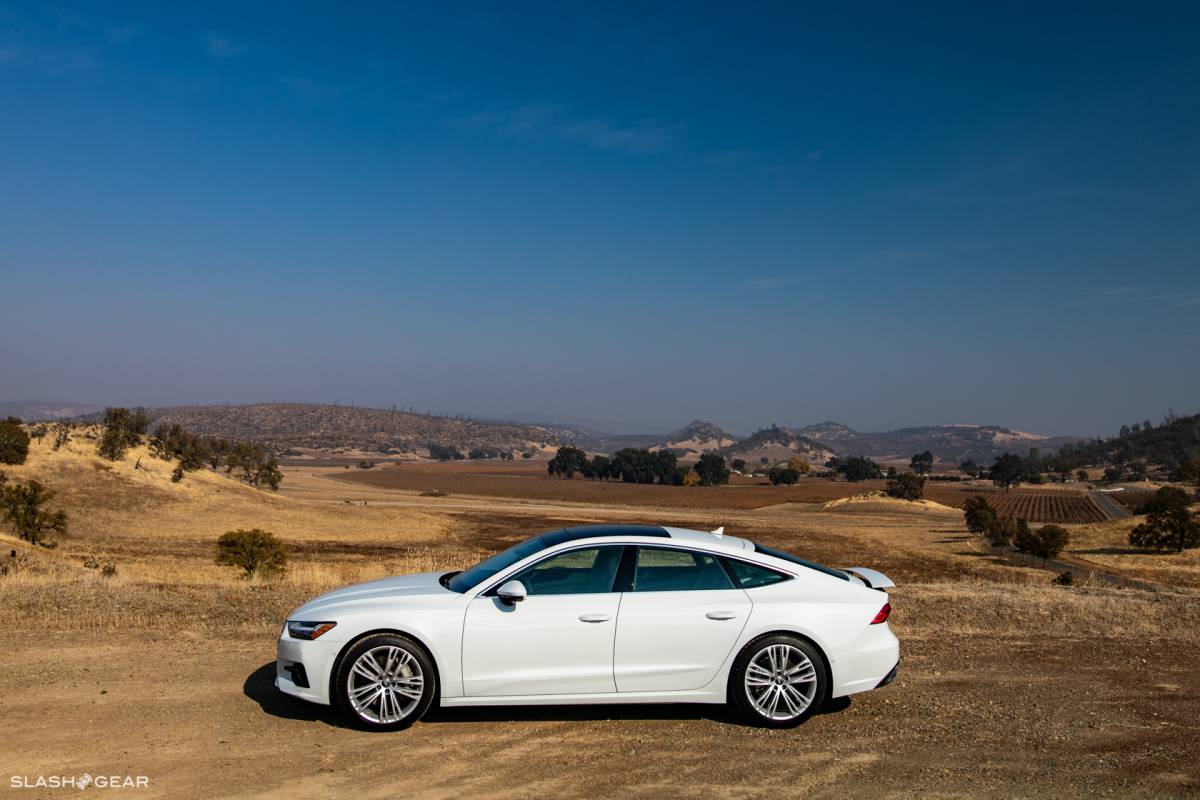 His original sketches were picked by his colleagues to transition into the final design. Sebastiano explained that winning fills you with a great sense of pride and accomplishment, as it’s a model that will live on for a long time and will be seen by millions of people around the world. He spent many years perfecting the design of the A7 along with the hundreds of other employees within the design center. 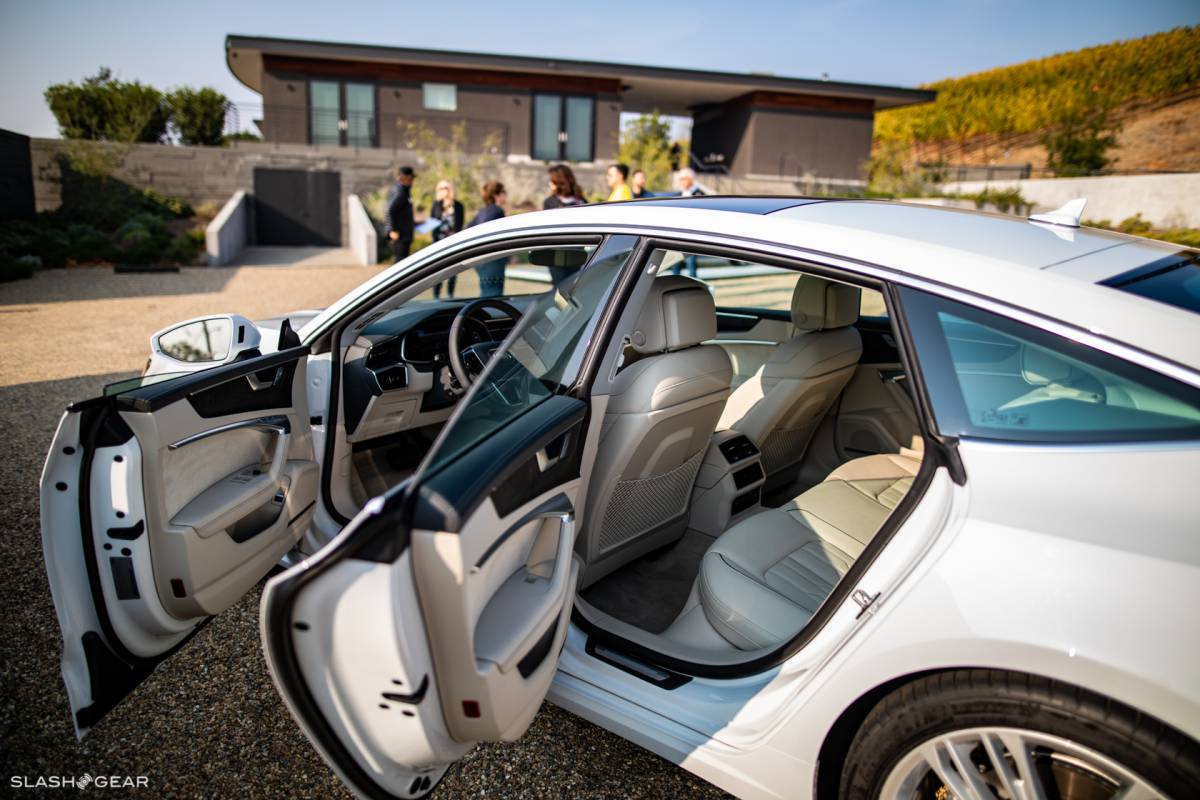 We paused just outside the winery lunch stop to admire the car. Sebastiano explained that this was the first time that he’s been to California and also the first time he’s experienced the car in this terrain and lighting. It’s a landscape that really helps show off the lines that the designer and his colleagues intended to emphasize, and define what makes the A7 beautiful.

The daytime running light has been a defining element for Audi for many years. Audi designers are pushing this even further and using light to give each of the latest Audi vehicles their own distinct identity. It’s not just unique headlight and taillight designs any more: the way each car appears with its startup and shutdown animations is instrumental, too. 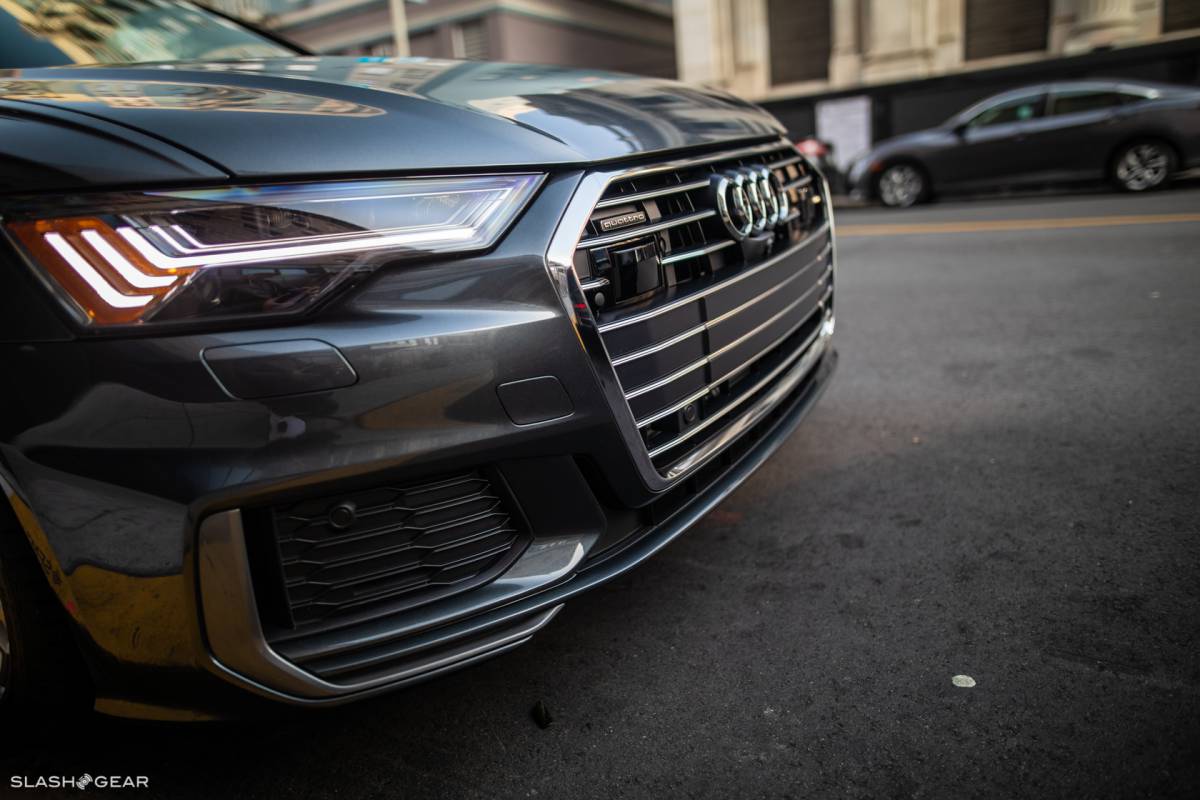 For the 2019 A7, Audi took the lighting even further with the inclusion of HD Matrix-design LED headlights with Audi laser light. “We use the sun to judge if something is dangerous,” Cesar Muntada Roura, Head of Lighting Design, explained to me. “Light is safety.” The better that you can control the light, then, the safer the driver and everything around them will be. 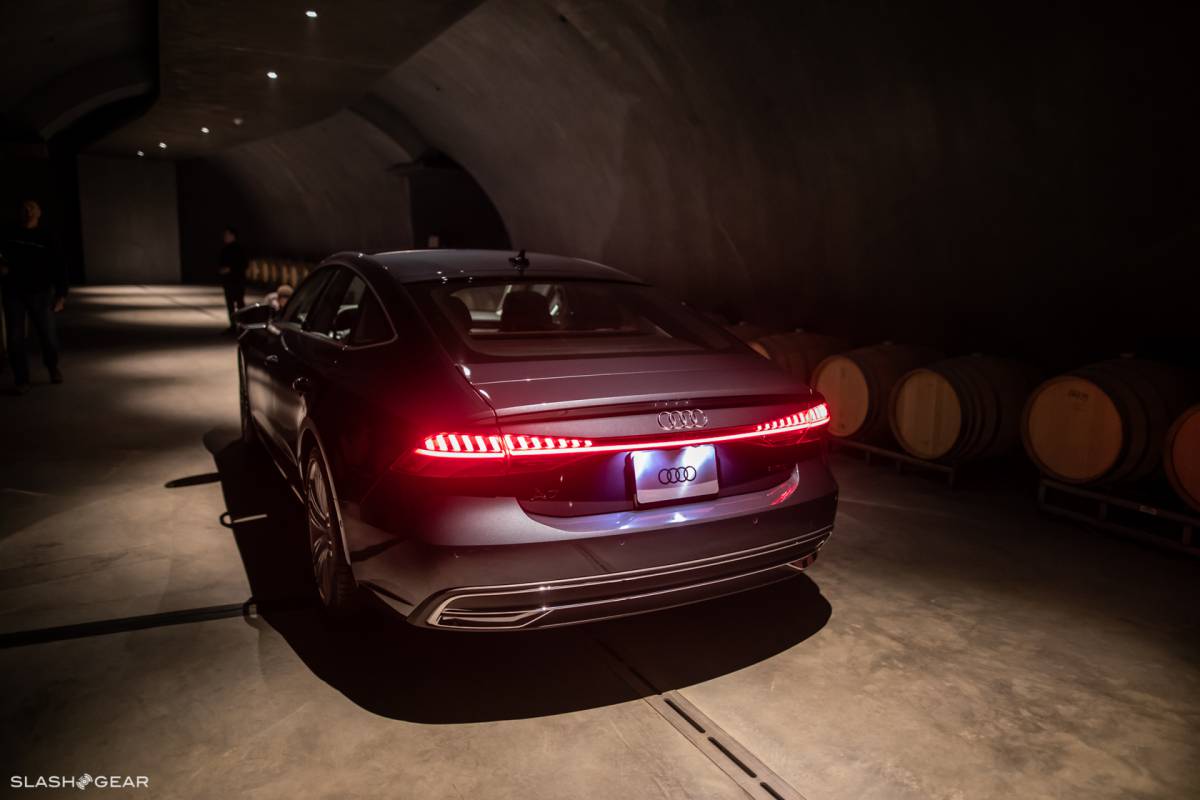 Even with that, finding the new A7 parked inside a wine cellar at the Nine Suns vineyard in St Helena, CA was a surprise. Currently, the laws in the United States around headlight design make the Matrix-design function illegal. Audi’s technology allows the car to dim individual LED elements to blackout an oncoming vehicle, while maintaining high-beams outside of that blackout area. The oncoming driver would have almost no idea that you have your high beams on. 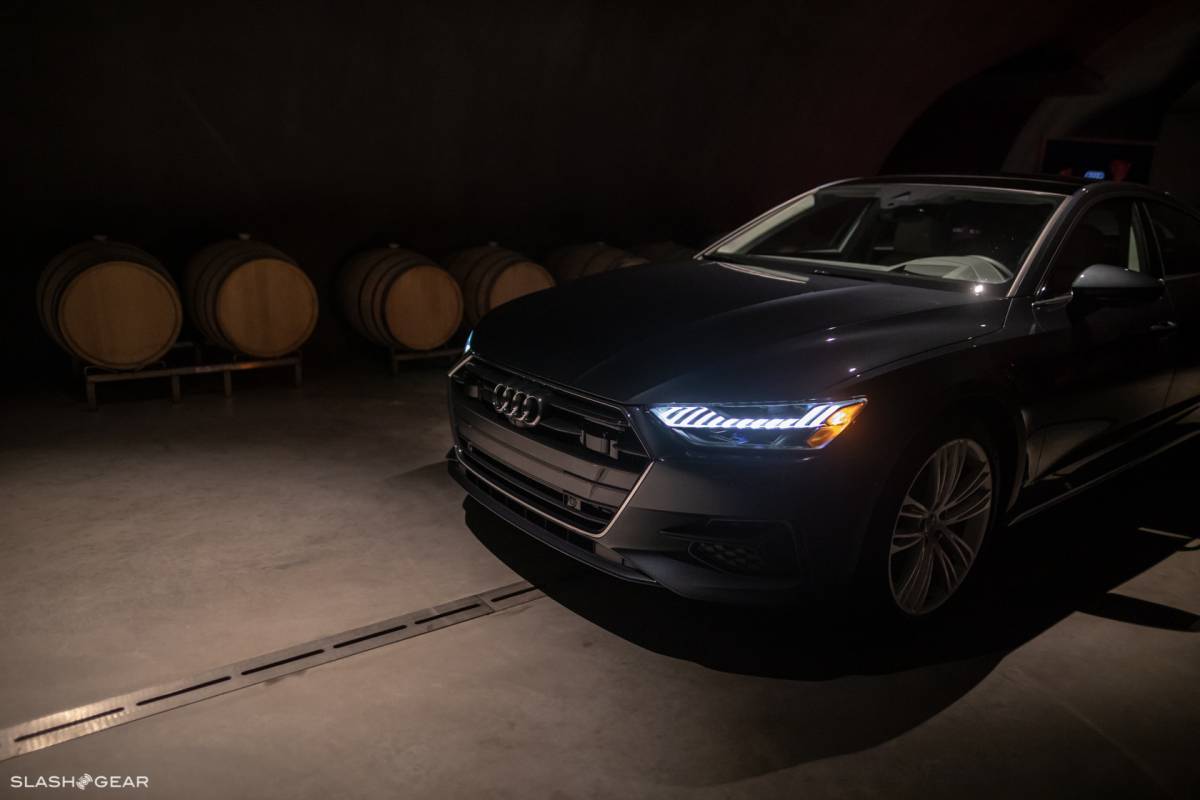 While trying that out on public roads was a no-go, Cesar was able to demonstrate HD Matrix in action using a flashlight, shining it directly at the front of the A7. Where he was standing before turning the flashlight on was flooded in light: quickly after turning on the flashlight, he became a shadow. Audi tell me that there’a draft of the law to change the current regulations around HD Matrix lights, currently in the open comments stage. Maybe, in the next few years, it will be adopted. For now, though, we need to maintain separate high and low beams.

The future of the driver experience is here

Audi has taken a new approach to connect the car and the driver. Utilizing Audi Connect and the Audi app on your phone, the vehicle can now identify who is in the driver seat. When your phone connects to the car’s WiFi, and assuming you’re signed into the app, your individual MMI profile will also be loaded. That contains your seating position, on-screen button placement, favorite destinations, radio stations, interior light preferences, and all the other personal settings that can be configured. Before you had two keys and you could program a key to a certain seating position. Now the customizations are endless, and you can even have a few other profiles that can be configured to each person if you share the car. 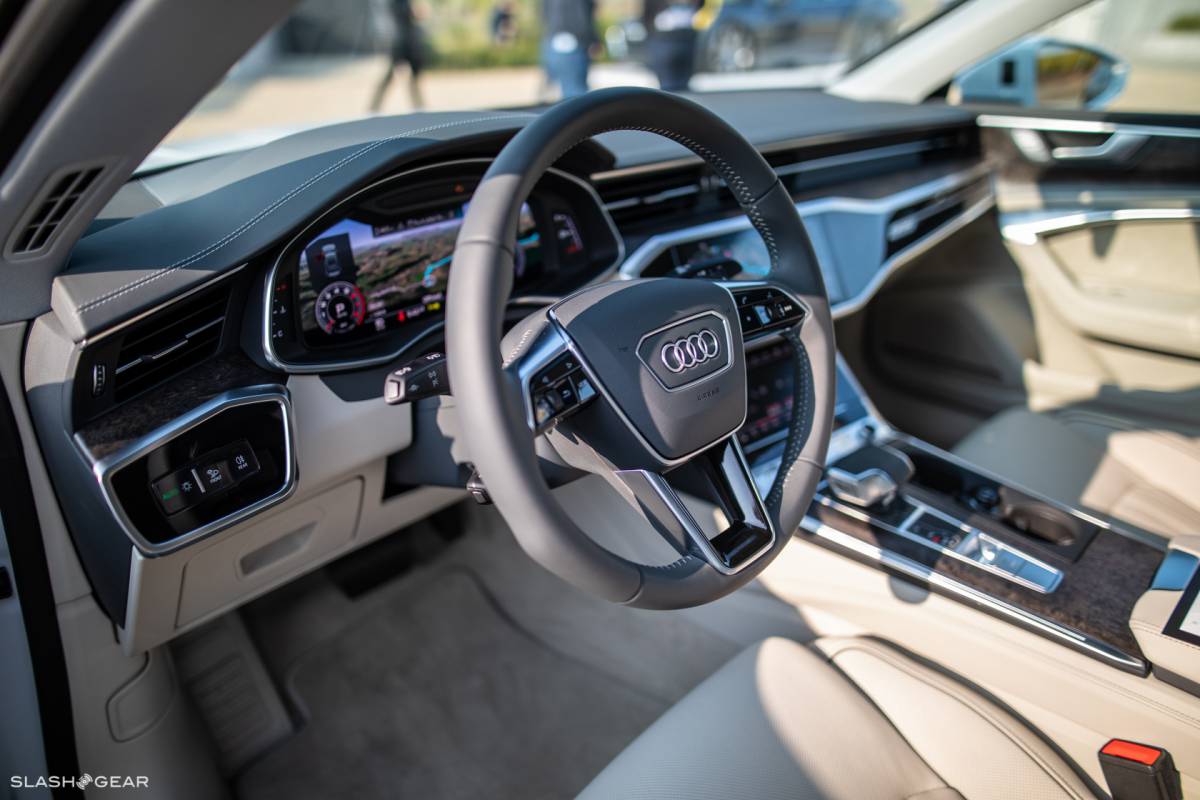 Sadly the US will miss out on Audi A.I. that European drivers will get to enjoy. The new Adaptive Cruise Control can be customized to match the driver’s personality: in sport mode, for example, the ACC accelerates quickly and brakes just as hard, right up to the bumper of the leading vehicle when they stop. The speed at which the car takes turns can also be adjusted, along with how aggressive the car is at automatically changing to the local posted speed limits. 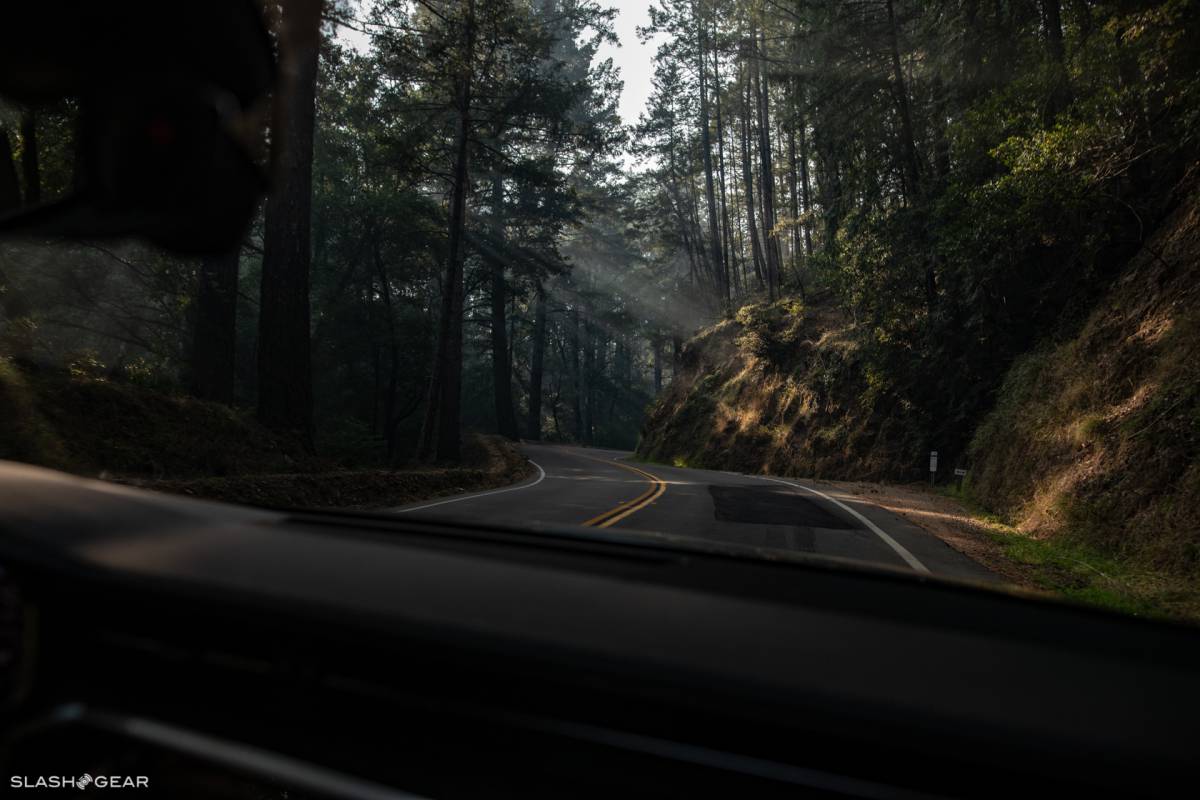 The start-stop system utilizes the same sensors to turn off the engine as you are approaching a stopped vehicle, and will now start the car up as soon as the leading vehicle starts moving – rather than waiting for you to lift your foot off the brake. Before, start-stop could be a bit of a mystery as to when it would engage. In the US, the 2019 A6 and A7 use a separate 48-volt electrical system to handle start-stop. 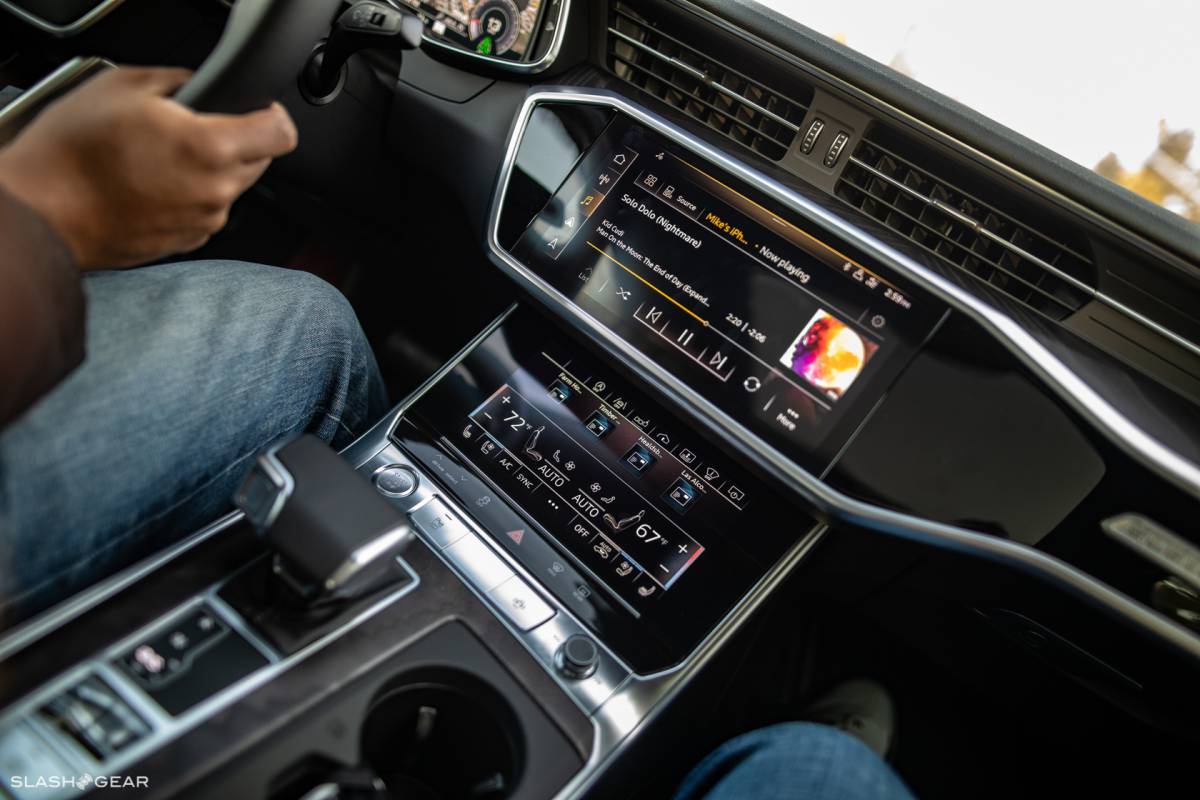 There’s a whole lot of flexibility here, and honestly the amount of personalization potential can be overwhelming. Even after three solid days that I had with the A6 and A7, it was clear that I still had a lot to learn. The future of the automotive landscape is now moving away from a reliance on analog buttons to a software-based world, where anything is possible.

The 2019 Audi A6 and A7 represent the future of the automotive landscape. Although Audi’s styling advances have been clear over the past years, these two new cars are some of the first from the automaker to realize the deeper ideas of the Prologue and bring them to life. Technology that understands and adapts to the driver, for a more unique and rewarding experience behind the wheel. 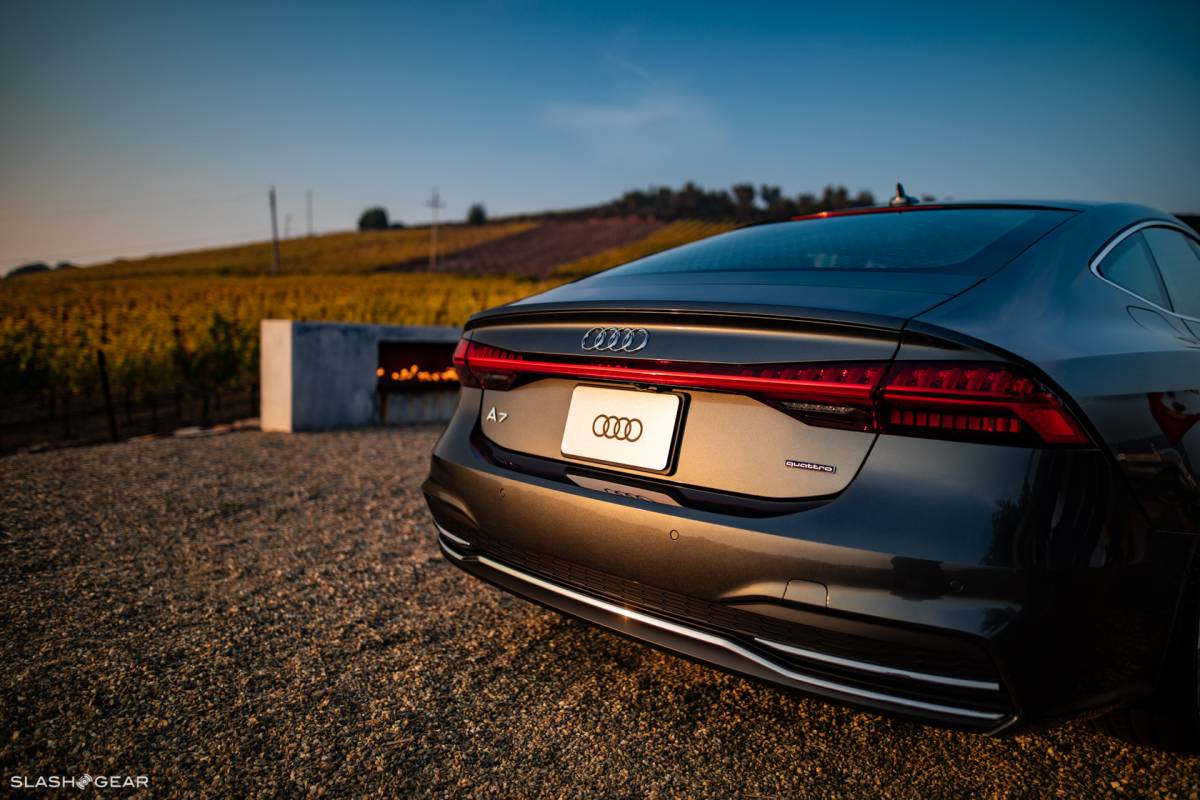 While some may argue that more technology in vehicles makes them worse and more expensive to maintain, I believe that it’s inevitable and – in the long run – will help. With so many vehicles on the road, and no shortage of distracted drivers, the more adaptive safety technology that we have, the better. Just like Audi Drive select was groundbreaking in allowing the driver to adapt the car to their needs, so the new MMI is the next step. The great thing about unlimited configuration is that you can still dial back the safety systems, take over, and simply enjoy the drive.