The new Nissan Leaf is the everyman EV

You could forgive the Nissan Leaf for feeling overlooked in the electric car segment. Tesla may get the lion’s share of the attention, particularly over the past eighteen months with the Model 3, but it’s Nissan’s far more affordable EV that has become the world’s best-seller. Now, there’s a brand new Leaf, completely reworked to reflect the changes in the electric vehicle landscape since the original debuted back in 2010.

The design is more mature than the toy-town esthetic of the old Leaf, closer to a regular internal combustion car in Nissan’s line-up than an electric oddity. With EVs now in the mainstream that probably makes a lot more sense: not everybody wants to wear their green credentials so prominently on their sleeve, after all. It’s about an inch longer and wider than before, though it looks bigger than that. I tested the 2018 Leaf; the 2019 model year only adds a rear door alert to remind you not to leave your kids behind, though it’ll only be offered later in the year. 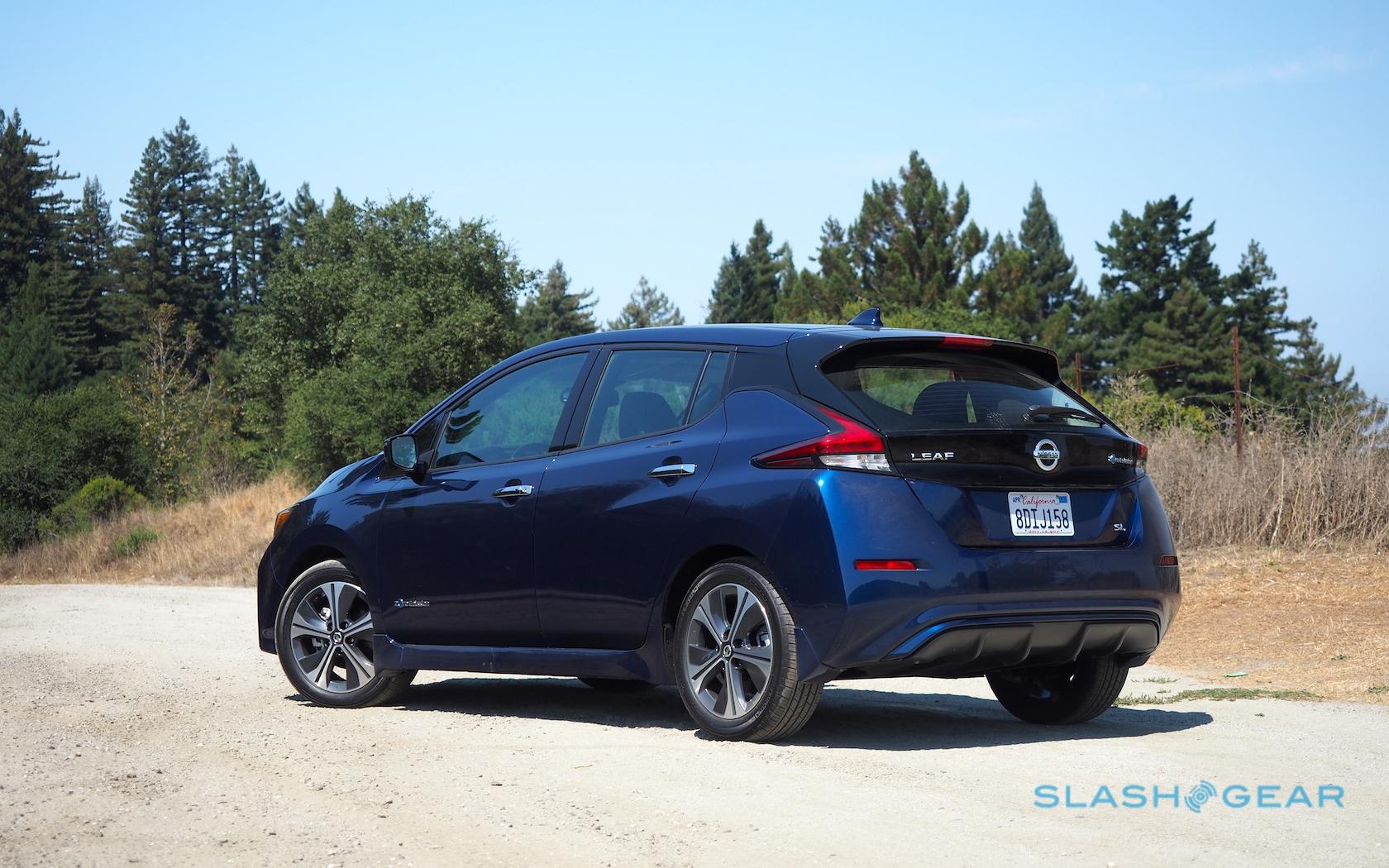 The drivetrain is more grown-up, too. Nissan rates the 2018 Leaf as good for 151 miles from its 40 kWh battery, and while that may fall well short of the 200+ miles you can expect from a Chevrolet Bolt EV or a Tesla Model 3, it’s certainly healthier than the outgoing Leaf’s 107 miles. The average driver may only go a fraction of that amount each day, but there was definitely something psychological about seeing the old Leaf’s range drop to double-digits after just a few minutes on the road. 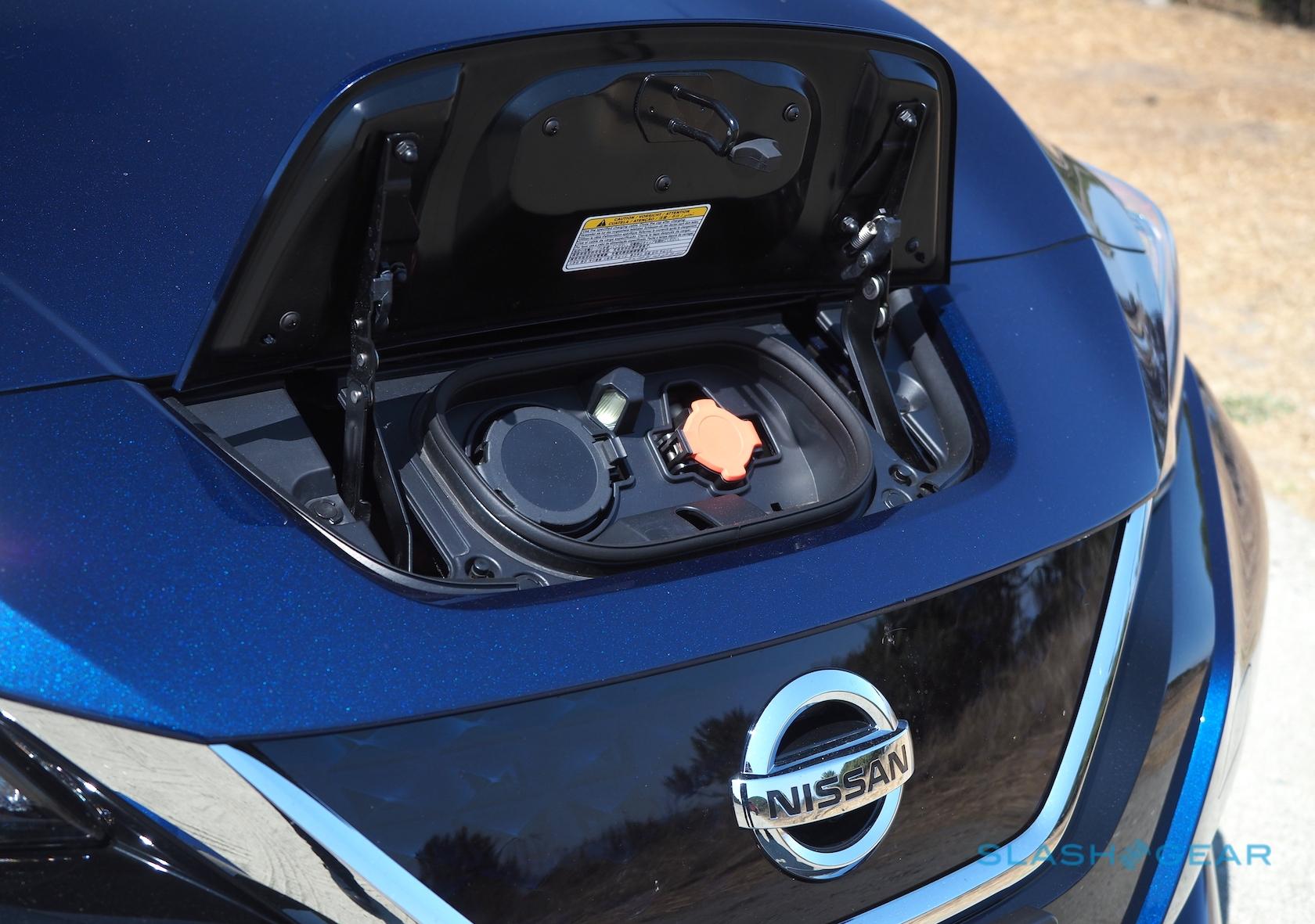 You’ll drain that charge with 147 horsepower and 236 lb-ft of torque from the 110 kilowatt electric motor, all delivered through the front wheels. 0-60 mph arrives in under eight seconds or thereabouts. No, the Leaf isn’t going to compete with a Tesla in Ludicrous Mode on a drag strip, but I suspect few owners of the Nissan would ever have that idea in the first place.

Instead they’ll be enjoying the instantaneous torque that leaves the hatchback feeling suitably perky, nipping away from the lights with a faint electric whine. As is often the case with smaller EVs, the weight is surprisingly high. Since the battery’s contribution to the roughly 3,500 pounds is situated low in the chassis, however, it does leave the Leaf feeling well planted and stable. 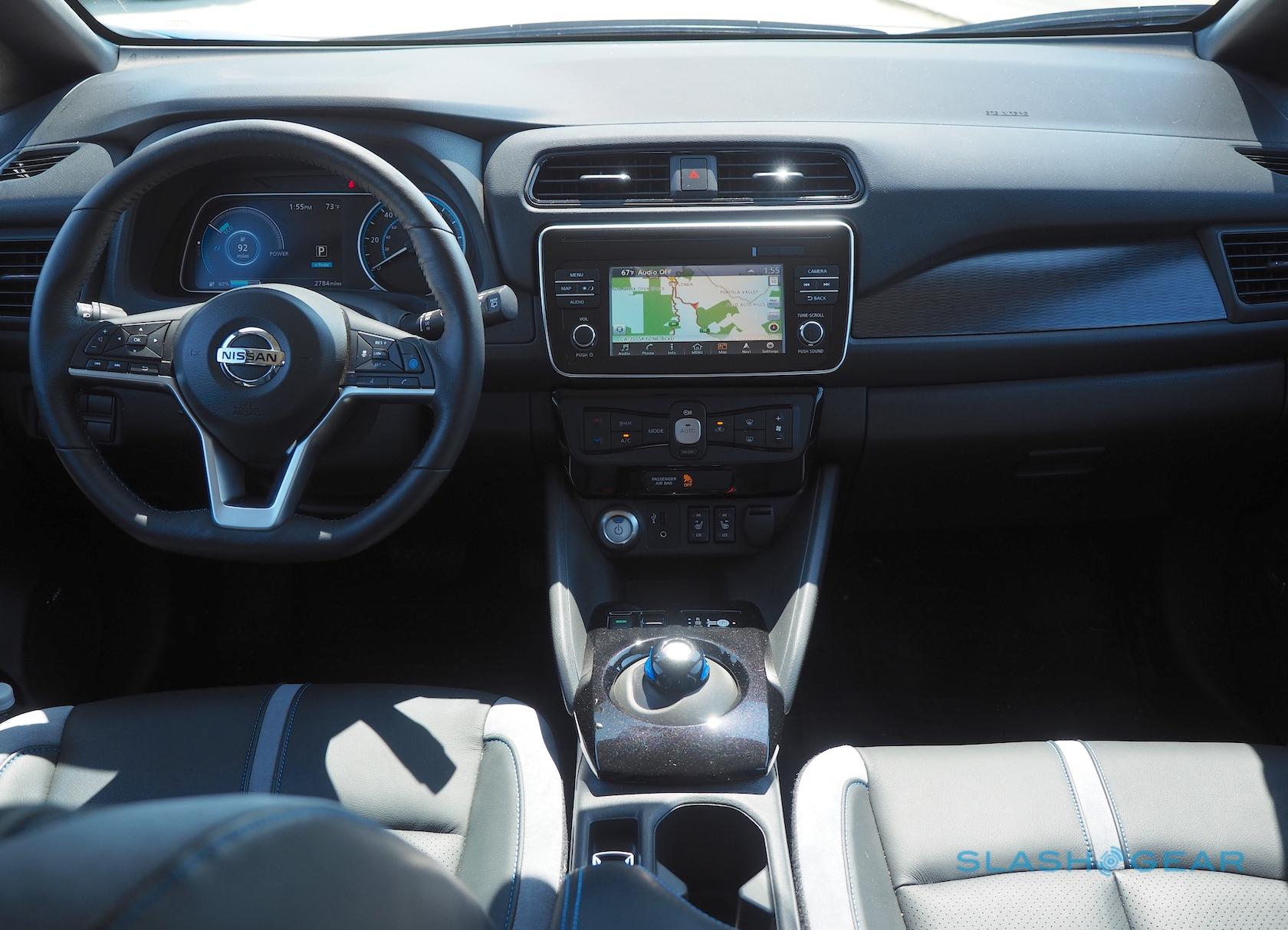 The big trick for this generation Leaf is the new e-pedal switch. If you’ve driven other recent EVs you’ll be familiar with one-pedal driving: more aggressive regeneration slows the car when you lift off the accelerator pedal, avoiding the need to shift your foot to the brake. It takes a little getting used to, but once you’re familiar with it you won’t want to give it up. 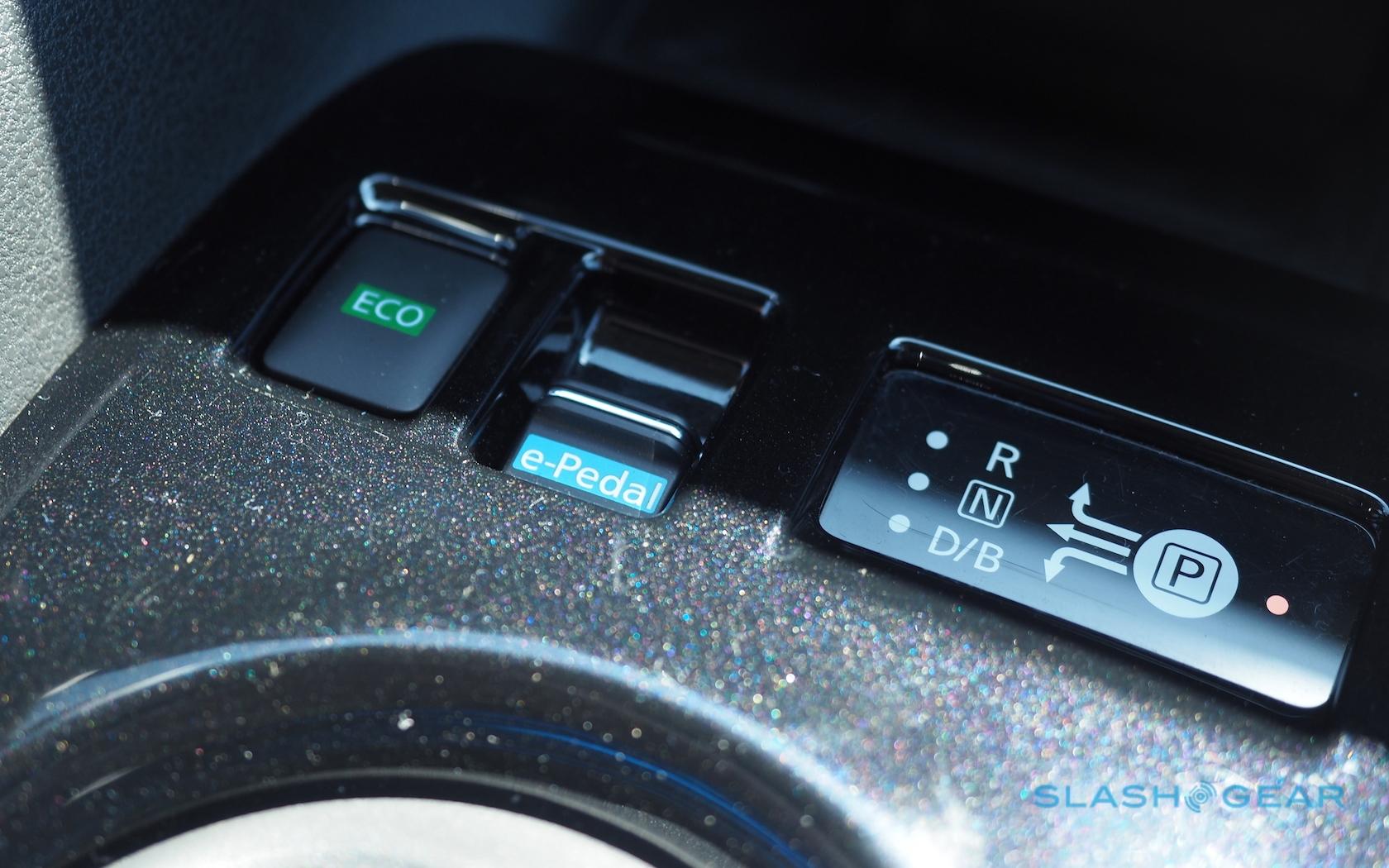 Like the exterior, the Leaf’s interior is more grown-up but hardly a style icon. It feels, well, normal – that probably helps when you’re trying to coax drivers of gas cars out into something greener. Things are spartan in the Leaf S, but get more interesting in the SV and SL. That’s when the 7-inch NissanConnect infotainment touchscreen arrives, for example, with its Apple CarPlay and Android Auto support.

Navigation is standard on the Leaf SV trim and above. As you’d expect, there’s a special EV charger register, which the Nissan can add to a route should you need to top up. Some chargers – though not all – have pricing and availability data, too, though I found the results I got through third-party apps would typically be more accurate. 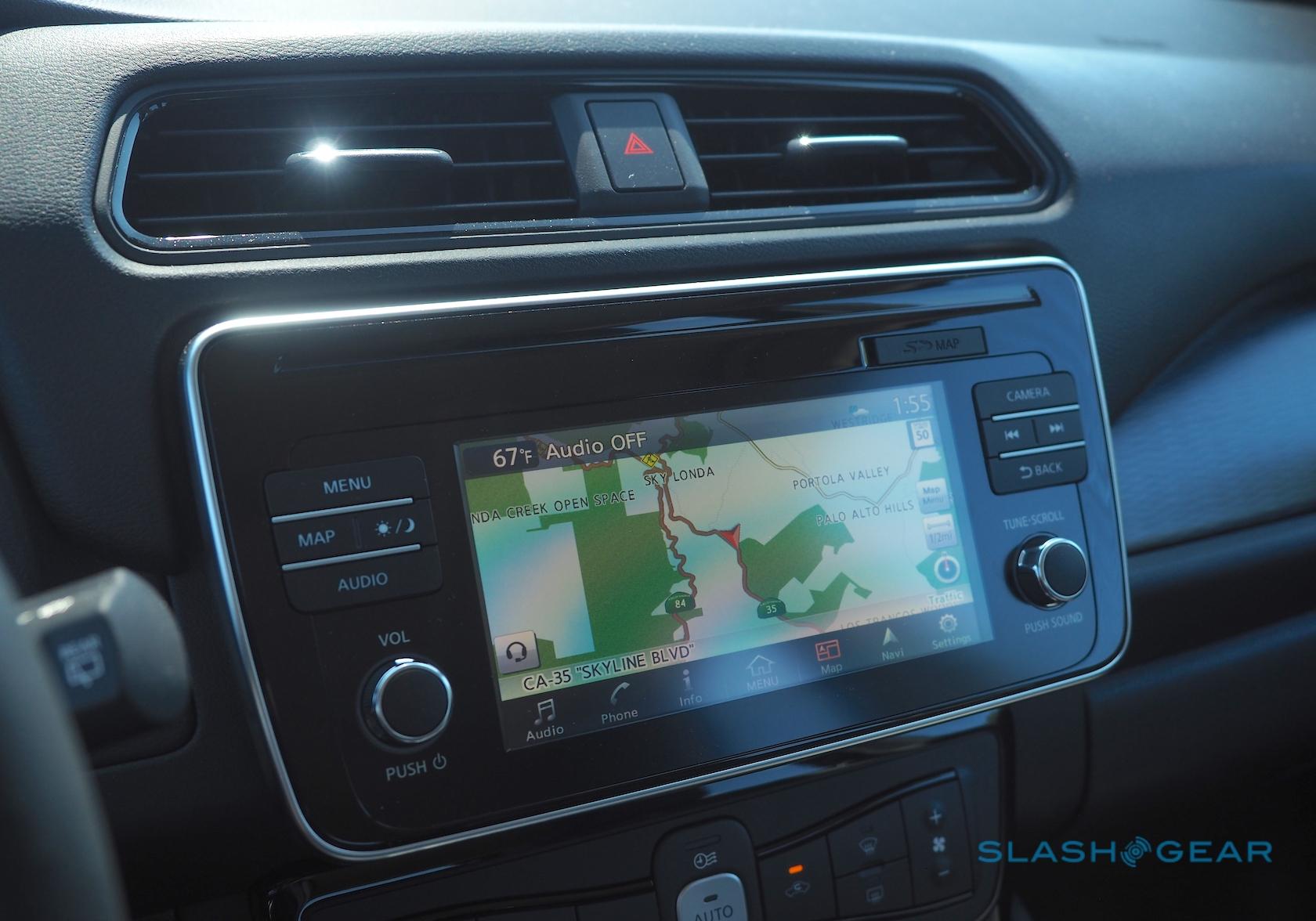 The other new addition to the Leaf is ProPilot Assist. It’s an option on the SV and SL trims, enhancing the adaptive cruise control with stop/start both get, along with the blind-spot monitoring and bird’s eye view camera that the SL throws in. Press the – somewhat plasticky – button on the steering wheel and the Leaf will not only maintain speed according to the traffic ahead, but also help keep itself in the center of the lane.

It’s far from Tesla Autopilot, mind. Nissan’s system will only deal with one lane: unlike in a Model 3, you’re on your own when it comes to switching lanes. The Leaf feels more aggressive in its demands that the driver keep their hands on the wheel, too, first chiming to remind you of your responsibilities, then giving the brakes a pulse, before finally bringing the whole car to a halt with the hazard lights blinking. 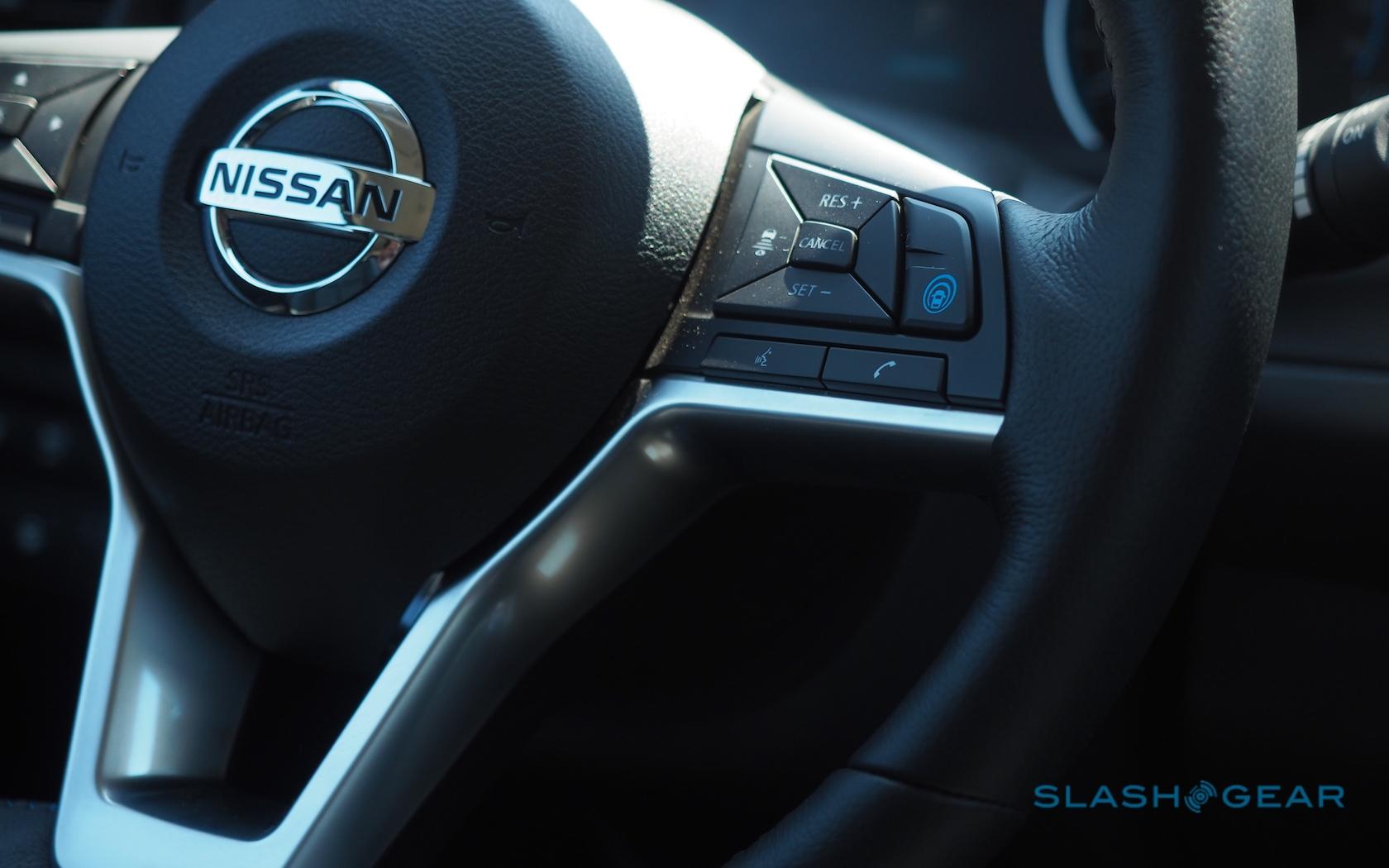 ProPilot Assist is part of the the optional Technology package, though it’s not available on the entry-level Leaf S at $29,990 (plus $895 destination). Instead you’re looking at the Leaf SV, starting at $32,490, where the Technology package – that also includes a power driver’s seat, the 240V charging cable, and rear cross traffic alerts, among other things – adds an extra $2,200.

That feels like the sweetest spot in the Leaf range, though the SL isn’t short on creature comforts. Leather-appointed seats, blind spot warnings, and many of the features in the SV’s Technology package are all standard for its $36,200 sticker. Adding ProPilot Assist and a few other tech niceties costs $650 more. 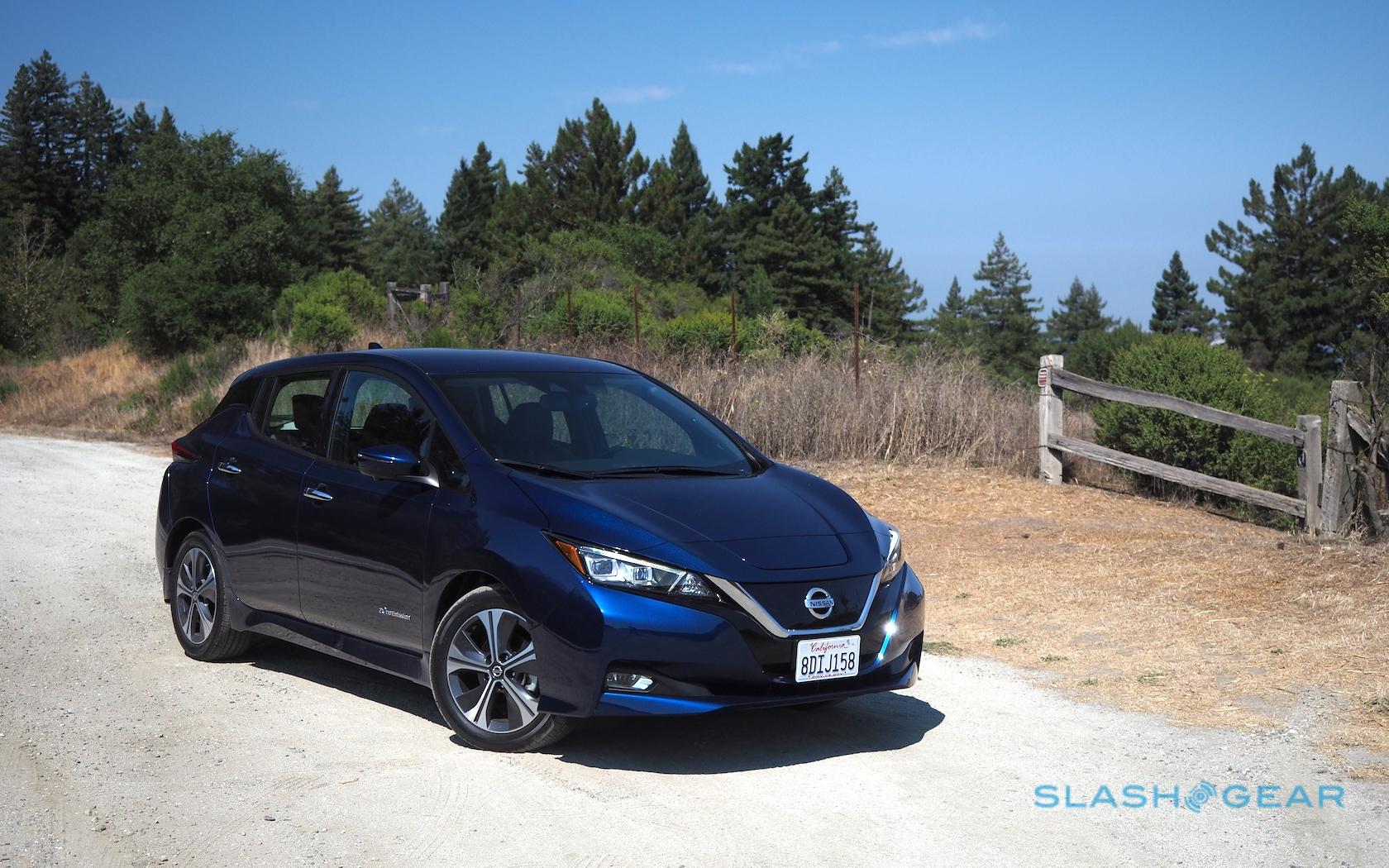 At that point you’re getting into Bolt EV territory, and while you can argue the merits of its styling versus Nissan’s, there’s no denying the value of the Chevy’s considerably longer range. My inclination would be to look to the cheaper Leaf trims, where the cost advantage – especially when you take into account what federal and state incentives might be available – can be impressive.

All in all, there’s a lot to like about the new Nissan Leaf. With a much more reassuring range, and the convenience of e-Pedal one-foot driving, it feels like the best-seller has shed some of the kookiness and settled into affordable maturity. Given where the EV market is today, that can only be a good thing.