Kia might not be the first automaker that comes to mind when asked to think about performance cars, but the 2018 Kia Stinger aims to change all that. Revealed at the North American International Auto Show (NAIAS) 2017 today, the new “fastback sport sedan” is set to hit Kia dealerships later this year, the company says. It’s the finished result of a promise the South Korean automaker made back when it first showed us the Kia GT concept, and said it would definitely be making a production version.

The result is a GT or “gran turismo” car which aims to cosset as it travels at speed over great distances: what Kia says is “all about the journey” rather than being first to arrive at the destination. Two engines will be on offer, both turbocharged; Kia says it hasn’t finished developing them quite yet, but the entry-level will be a 2.0-liter four-cylinder. That’ll be good for around 255 HP and 260 lb-ft. of torque between 1,400 and 4,000 rpm.

Those wanting more performance, meanwhile, will have the option of a 3.3-liter twin-turbo V6, expected to muster 365 HP and 376 lb-ft. of torque from 1,300-4,500 rpm. With that, Kia says, it’s expecting a 5.1 second 0-62 mph time, and a top speed of 167 mph. Both engines will be paired with an eight speed automatic transmission, with paddle-shifters.

Either rear- or all-wheel-drive will be offered, a first for Kia sedans. The AWD will have brake-based torque vectoring, individually braking the wheels to ensure traction. The RWD will have a mechanical limited-slip differential. Both will have five different drive modes to switch between, changing the settings of the suspension, steering, shift patterns, and throttle mapping. 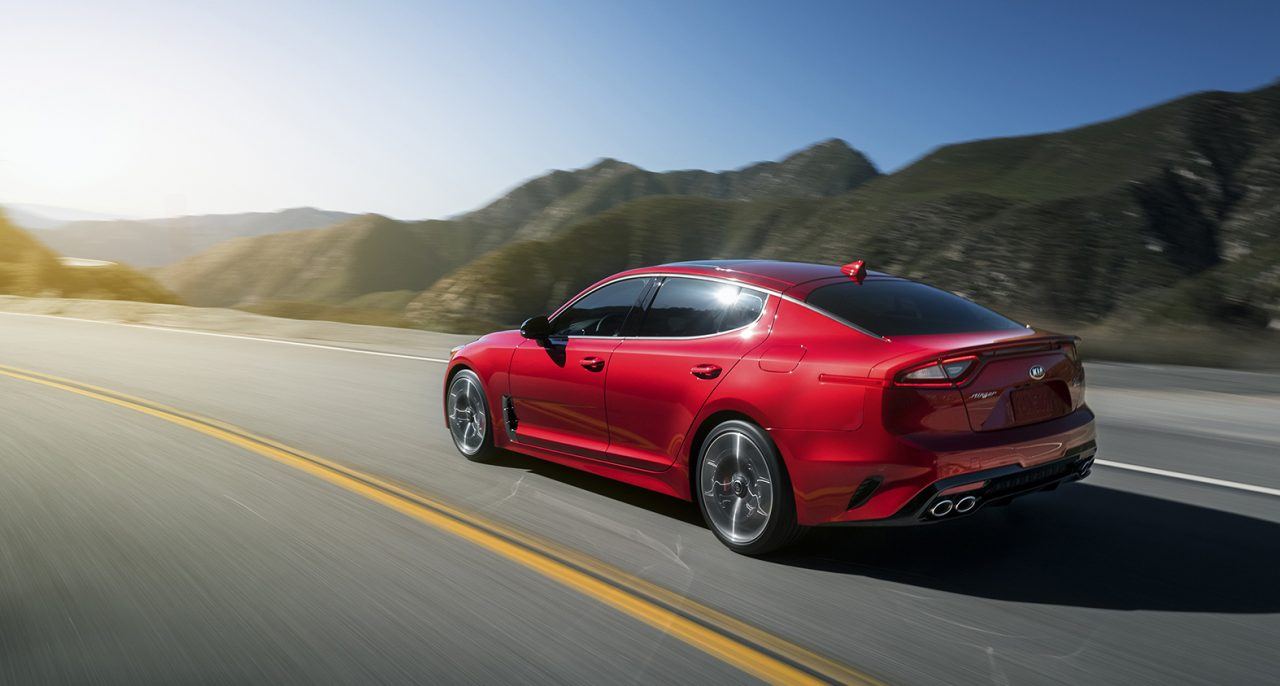 With a longer wheelbase than Audi’s A4, the BMW 4 Gran Coupe, and Mercedes’ CLS at 114.4 inches, the Stinger should have plenty of interior space; a power ljftgate will be an option. The MacPherson front and multi-link rear suspension can be driver-adjusted between those five settings: Personal, Eco, Sport, Comfort, and Smart. 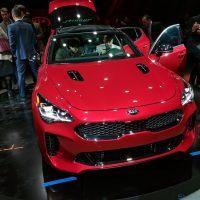 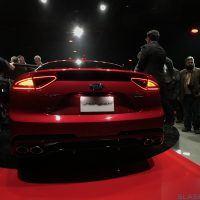 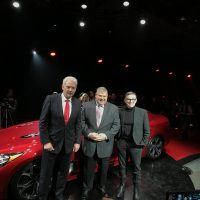 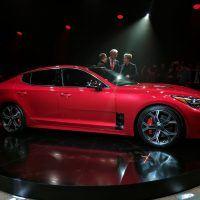 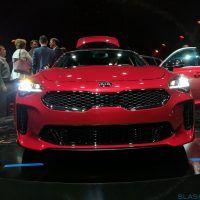 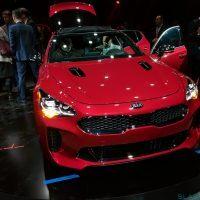 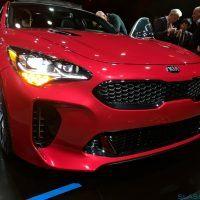 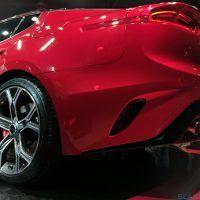 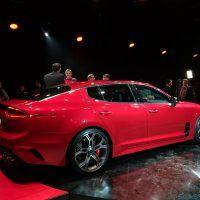 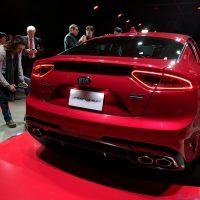 It’s longer overall than rivals, too, at 190.2 inches. The front has short overhangs and a lengthy hood, while the rear has longer overhangs; the doors feature recessed contouring and a high shoulder-line. Quad-tailpipes at the rear and LED headlamps give some visual glitz. 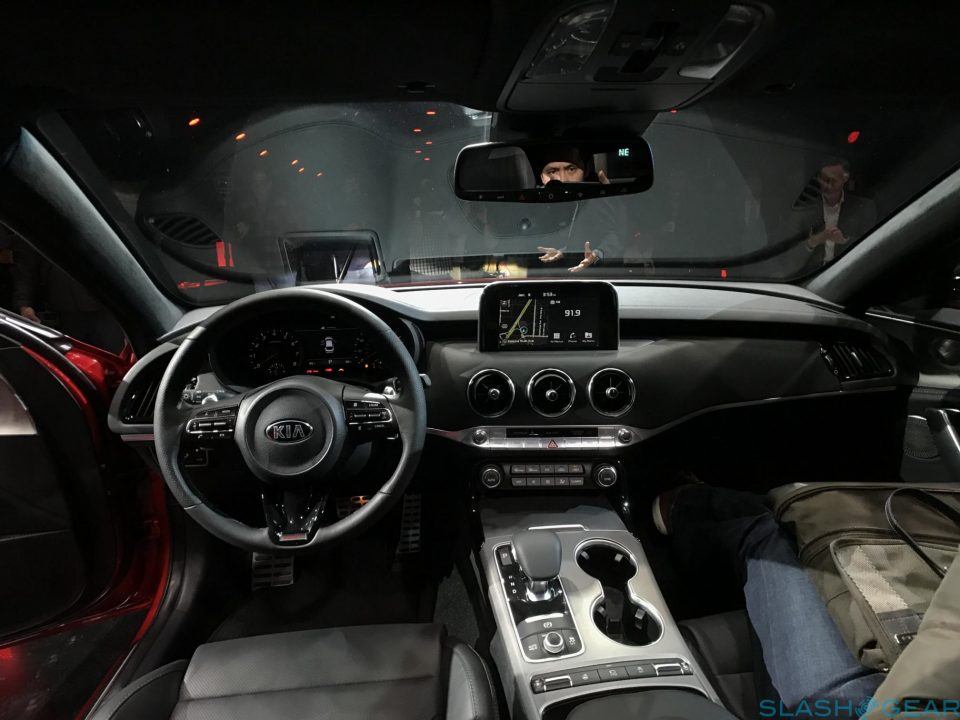 Inside, there’s ultra-soft Nappa leather on the options list, while the driver can have a special performance seat with air-support. The steering wheel is leather wrapped, and the driver instruments mix digital and analog; a color TFT display between the physical gages shows performance data like G-forces in the corners and lap timings. Satin chrome trim is used as a shoulder highlight, while Kia says the low-slung seats mean headroom is decent too.

As for tech, there’s a new Drive Attention Alert which warns drivers if their road-behaviors are getting sloppy and it’s time for a break. Forward Collision Assistance and Autonomous Emergency Braking are available, as is adaptive cruise control with the ability to bring the Stinger to a full halt in traffic. There’s also lane-keep assist and rear cross-traffic alerts. 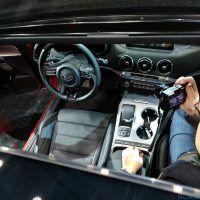 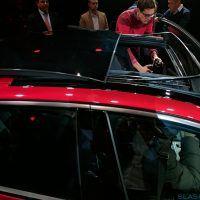 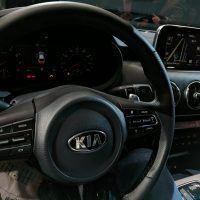 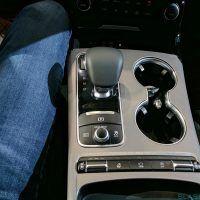 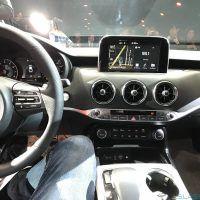 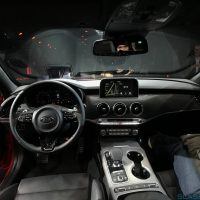 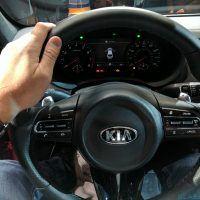 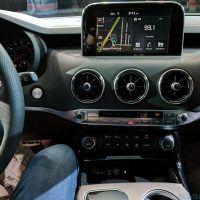 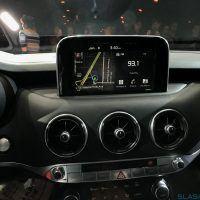 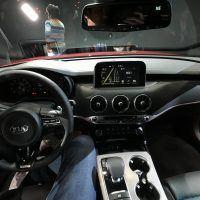 Above the dashboard there’s a color head-up display option, and wireless phone charging is an option for the center console. Kia’s UVO infotainment system is standard, with the option of a Harman-Kardon 720W audio install, featuring fifteen speakers and two subwoofers, one under each of the front seats. A seven-inch touchscreen is standard. 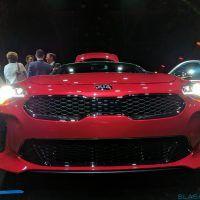 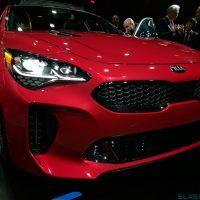 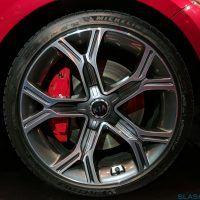 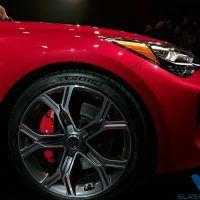 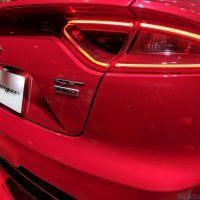 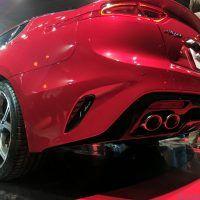 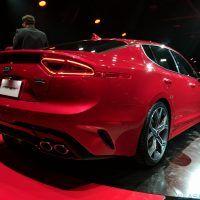 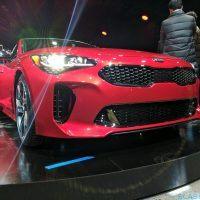