There’s a war brewing. In the world of the all-wheel drive, best-of-the-best performance sedan, a new challenge approaches. Watching, warily from the corners is the 2017 Audi RS7 Performance, with its massive 605 hp and 553 lb-ft of torque. Then there’s the 6,000-pound elephant in the room, the Mercedes-AMG E 63 S, with its 603 hp and faintly ridiculous 627 lb-ft of torque. Each is a stellar performer, and each has some big new competition. The new 2018 BMW M5 is here, and I’ve been testing it on and off the track.

The technical specs make for some entertaining reading. Under the hood is BMW’s highest performing engine, a 4.4-liter twin-turbocharged V8 that’s good for 600 hp and 553 lb-ft of torque. Maximum power arrives early, at 1,800 rpm, and then runs all the way through to 5,600 rpm. It sounds pretty damn good while it does it, too.

Numbers like those put the M5 right on par with its German competition. In contrast, up to now, BMW’s highest performer was the M550i xDrive with a similar engine but only good for 456 hp and 480 lb-ft of torque; that meant 0-60 mph in 3.8 seconds with a top speed of 155 mph. The M550i was – and the operative word is was – the quickest 5 Series, ever. That changes now. The M5’s 0-60 mph officially clocks in at 3.2 seconds (vs. 0-100km/h ~3.4 seconds), but that result depends on a number of variables. Take, for instance, Estoril Raceway, where the BMW M division handed me the keys and told me to put the sports sedan through its paces. There, the road surface is super-sticky, Frank van Meel, CEO of BMW M, explained to me, and that means it’s easily possible to drop the time by a tenth of a second or more. 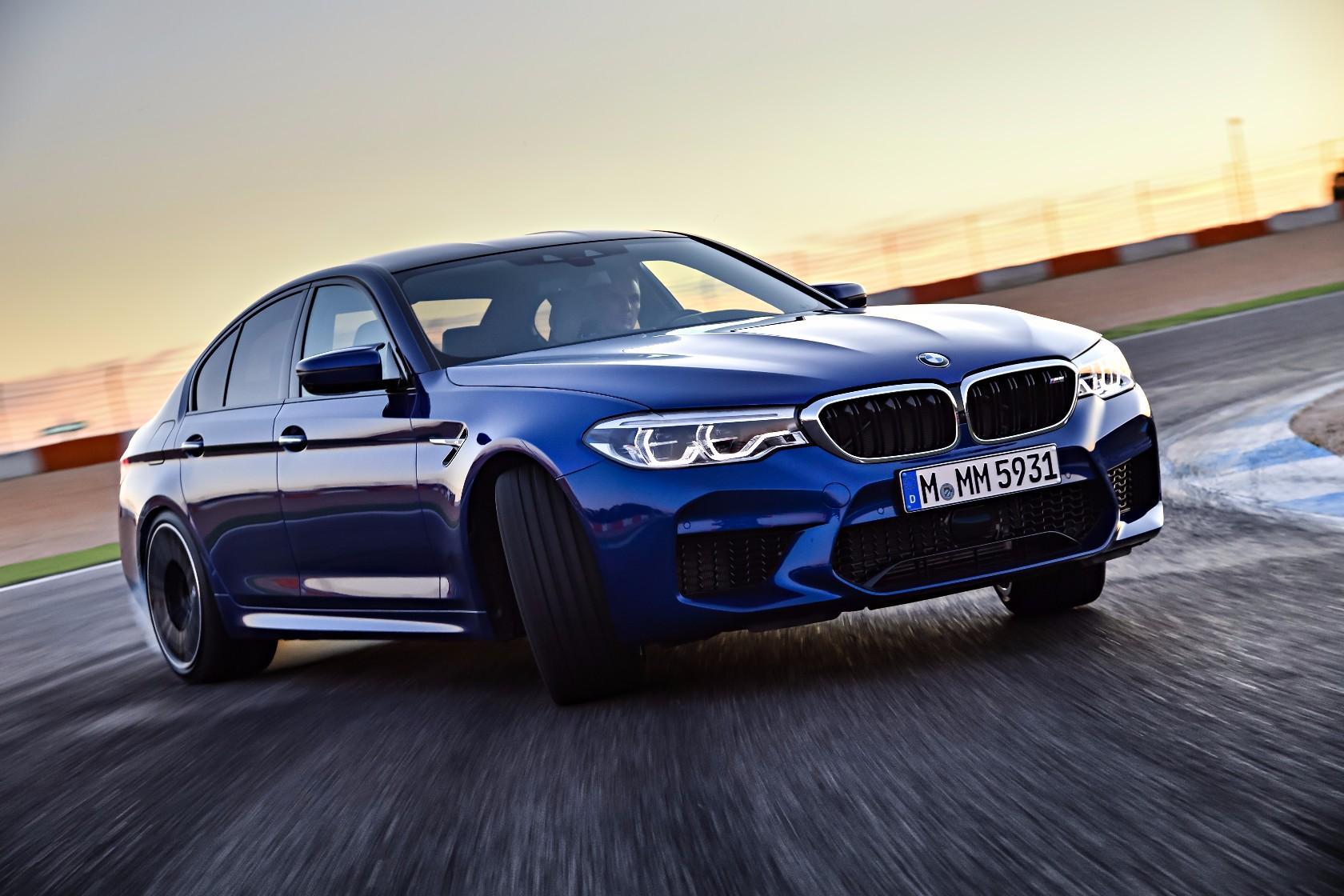 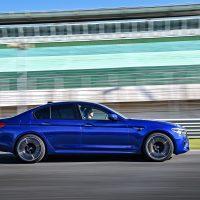 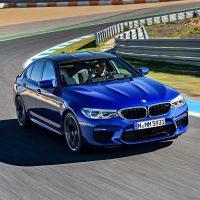 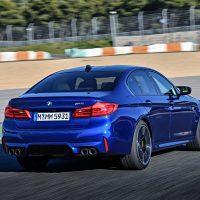 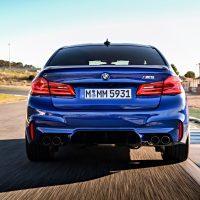 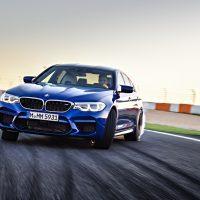 A high-revving, high-power engine requires the right transmission and, according to the BMW engineers, the ZF-built, eight-speed torque-convertor, automatic, the sequential gearbox is the best for the task. It replaces the outgoing dual-clutch transmission (DCT) but promises to shift just as fast. Indeed, on or off the track, this M Steptronic 8-speed drops gears like they’re going out of style, regardless of the driving mode you’ve selected. 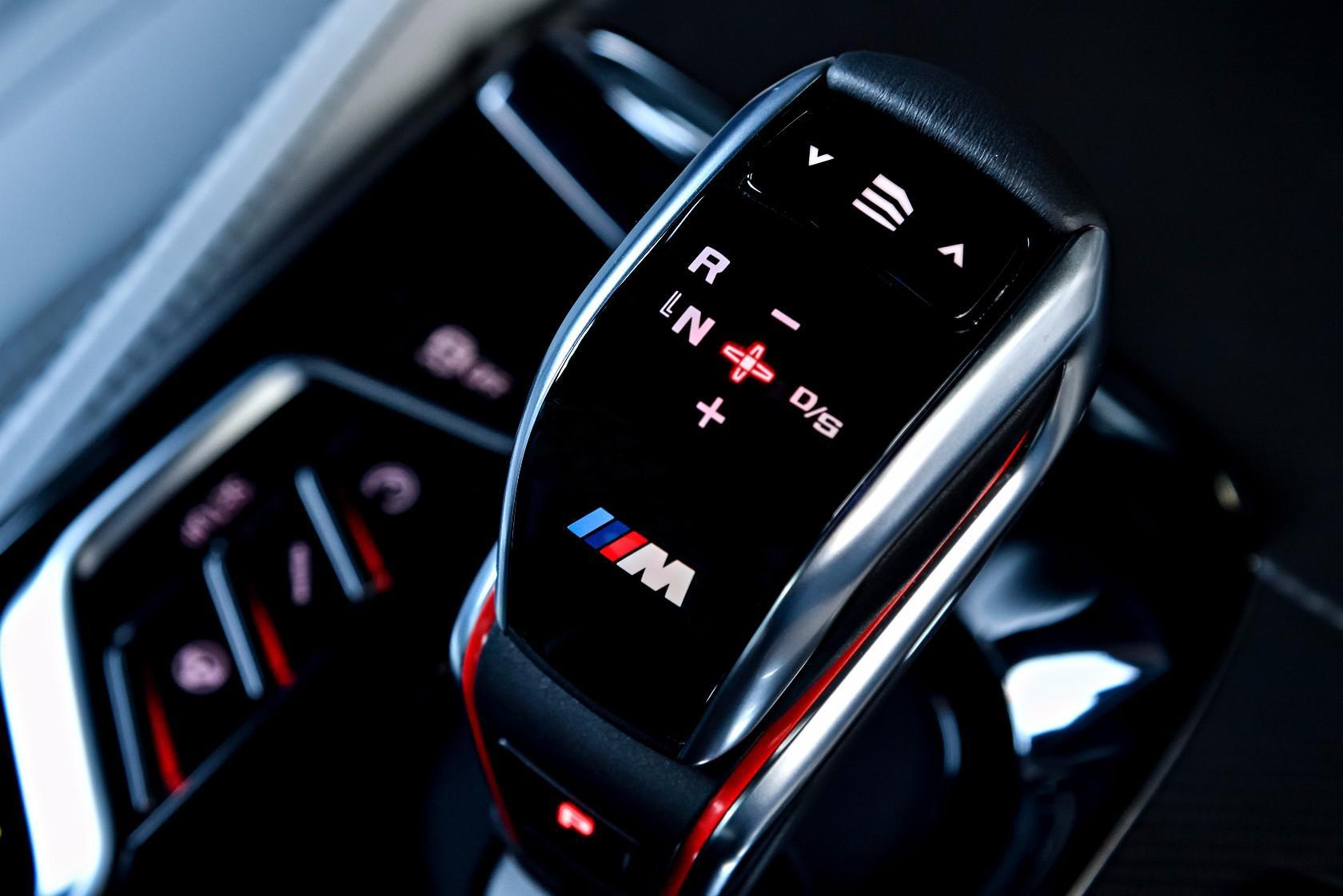 Since it’s a BMW, and since its an M car, there are some tricks along the way. I particularly liked being able to quickly select how fast the gears shift via the gear lever. BMW measures it in bars, of which there are three. On the road, the first bar is more than sufficient, while BMW programs the second bar as the default for both the M1 and M2 quick-mode select keys, which are mounted on the steering wheel and offer speedier access to your favorite configurations. You can’t miss them, either, because they’re bright red anodized metal.

The engineers may have decided the second bar was more than enough for the track, but I found that ticking the lever up to the third bar was much more rewarding for Estoril. There’s an uphill, hairpin left-hand-chicane toward the end of the track, right before the long straight, where you truly feel the value of putting the transmission into its highest performance setting. If, though, you’re hoping for a manual version I’m afraid you’re out of luck. For the purists that may be a deal-breaker, but trust me, this 8-speed auto is faster, smoother, and slicker than you’ll ever be. 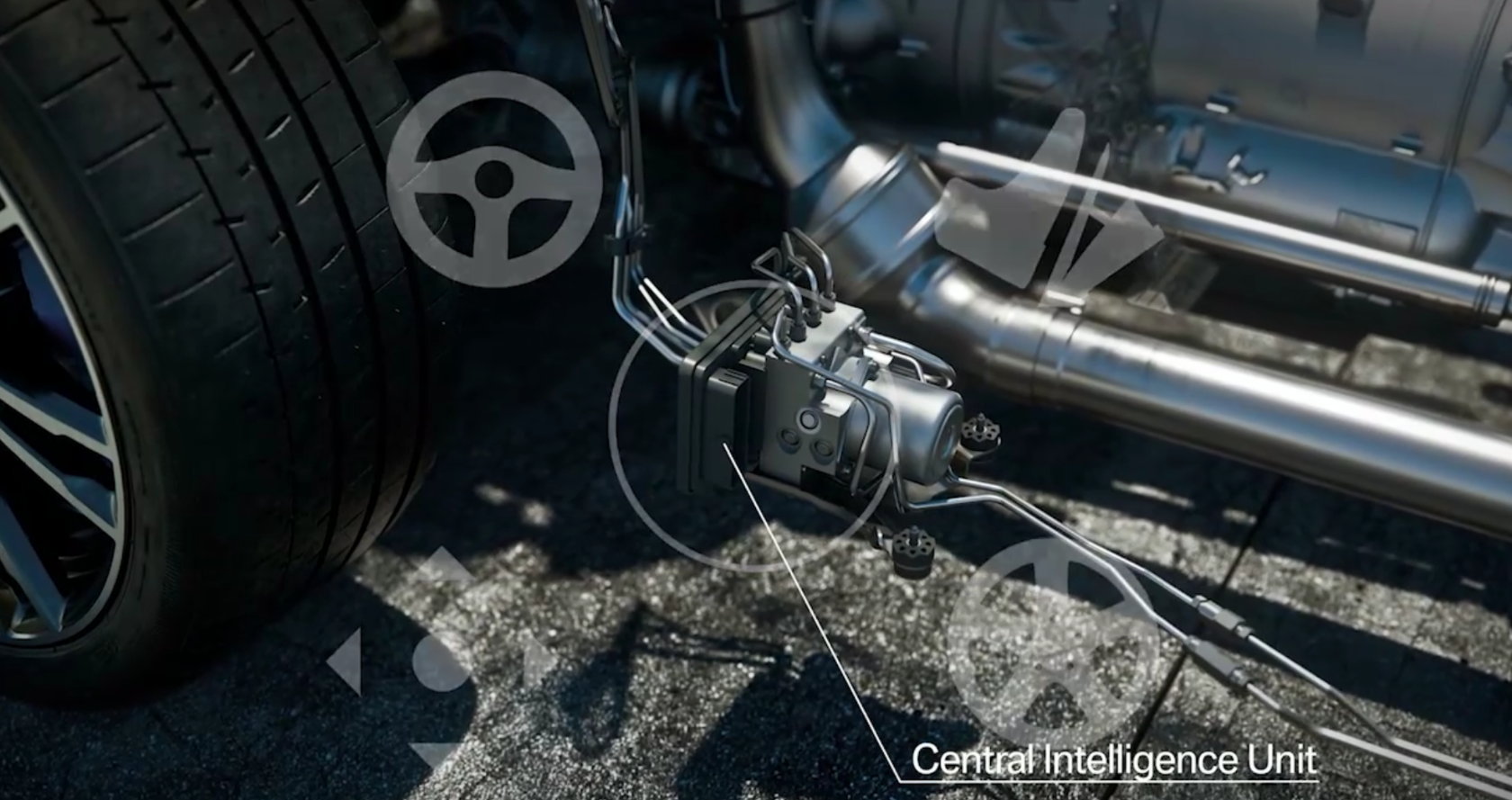 If the twin-turbocharged 4.4-liter “hot-V” V8 is the heart and soul of the M5, then the M xDrive is the central nervous system. BMW’s all-wheel-drive system packs M-specific software tuned for the car’s powertrain and driving dynamics specifically, with five different settings that can be picked by the driver and optionally saved to the quick-mode select keys.

Going through the wealth of settings BMW offers can be a little overwhelming at first when you’re confronted with which damper settings to use, or steering stiffness, or drivetrain mapping. Spend a little time behind the wheel, though, and any of those initial doubts will soon evaporate. Helping there is how easy BMW makes it define the M1 and M2 settings, which encourages tweaking. For the road portion of our drive, my co-driver and I decided that, in dynamic all-wheel drive, the Comfort setting for the dampers, along with Sport Plus for the steering and drivetrain, was our preferred configuration for some spirited driving without things getting too choppy. 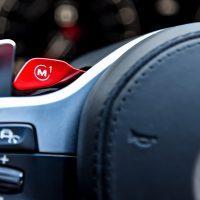 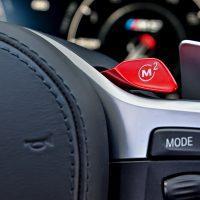 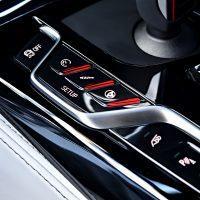 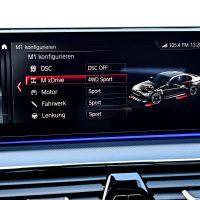 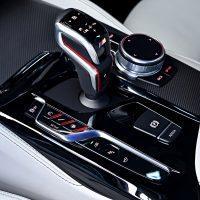 There’s another option, though, even if it’s really only intended for those who know what they’re doing. The 2018 M5 may be an all-wheel-drive car, but you can force the powertrain to diver all – and I do mean all – of its grunt to the rear wheels. Essentially you’re turning the M5 into a rear-wheel drive, 4-door sports car, which is something I know will be music to the ears of long-time BMW enthusiasts. 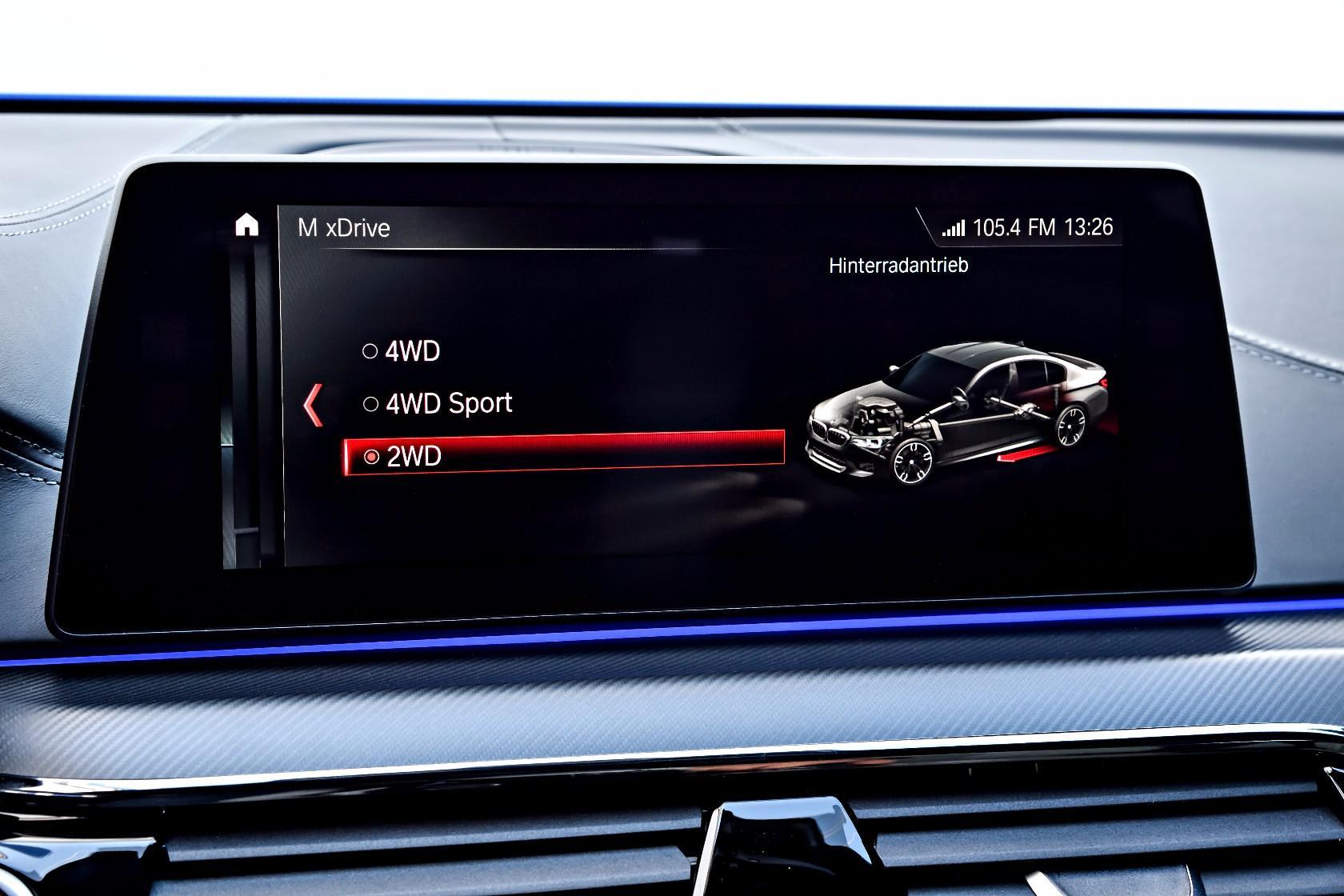 Rest assured, this is a true RWD experience. I hopped in the front seat of the M5 with track pace driver Bruno Spengler, to get a first-hand experience of what the car can do at the whim of a professional driver. Sure enough, we proceeded to drift from corner to corner. The M5 really is a car of two distinct styles: at one point, when Bruno instructed the rest of the drivers to switch over to M2 drive mode which had been set to AWD, he himself demurred. “I’ll stick with rear-wheel drive,” he told me, “because, well, I like it.” Thus followed the most incredible, smoky-drifting burnout, leaving the sort of dramatic cloud of smoke I’d started to wonder if today’s proficient but often bottled-up sports sedans could still deliver.

I’m seriously glad BMW offers the choice. Six hundred horsepower is a whole lot of power when it’s only going to the rear, as I discovered myself in my own playtime with RWD mode. While you might not expect it – and I certainly didn’t from the haze of smoke still left from Spengler’s efforts – the car actually handles well, just as long as you’re fairly responsible and don’t drive beyond your abilities.

Conversely, there’s no longer a compromise for owners living in winter climates and facing seasonal snow and ice. There, the four-wheel drive should keep the M5 planted thanks to BMW’s systems tailoring which corner gets the most power at any given time, depending on grip. Indeed it’ll push as much as 100-percent of the power to the rear, even in AWD mode, if the circumstances warrant it.

There’s another good reason to stick with 4WD Sport, mind, as, for the most part, we ourselves did. That’s because it leaves the M5 at its fastest: it’s simply the most effective way to get the power down to the asphalt, rather than losing it in wheel-spin. By deactivating the DSC control – by pressing and holding the button for a couple of seconds – you get access to three M xDrive modes. From there, you can individually configure the whole system to your liking.

There’s plenty more, mind, that makes the M5 special. Behind the grille is just one of the car’s nine coolers, for instance, that helps keep the engine running at its most optimal. In-between the cooler and the grille, though, are support “beams” that help to keep the chassis stiffer. It allows you “to get more precision of the front axle, like in motorsport where you need this precision in driving,” according to Frank van Meel, the head of the BMW M division. There’s a whole lot of chassis and suspension magic going on behind the scenes.

What does all this mean to you as the driver? The M5 is one hell of a thrilling car to drive. It excels at the sort of tight, winding, off-camber roads with dramatic changes in elevation, which is where I suspect most drivers will find themselves playing, rather than at the track. Cruising down twisty stretches of Lisbon back country road, I was struck by how poised and precise the handling is, even with the curb weight of 4,090 pounds. The carbon-fiber-reinforced plastic (CFRP) roof plays a part in keeping that weight down, in addition to lowering the center of gravity. 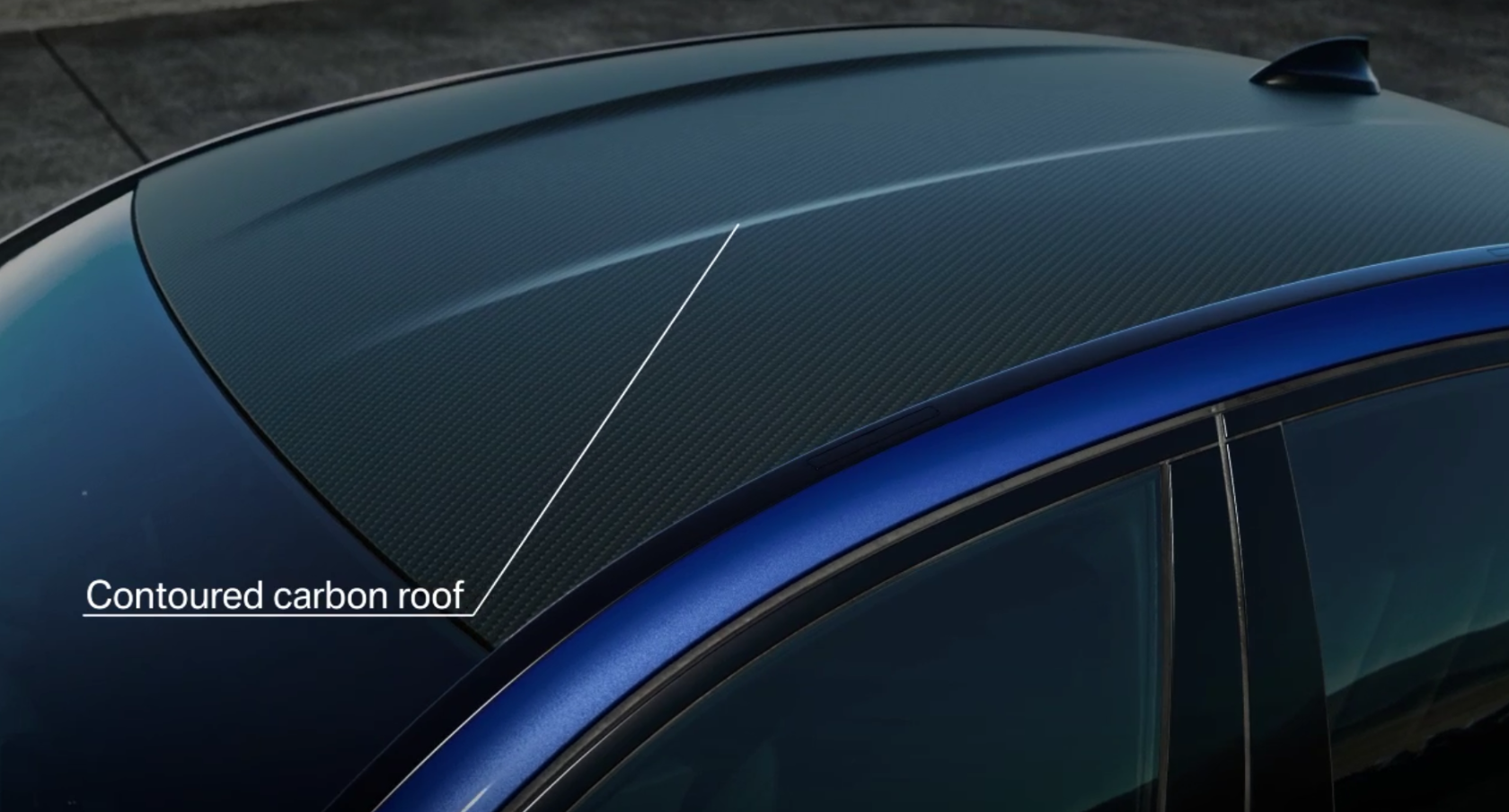 Its impact proved to be most pronounced on the final, sweeping right-hander at Estoril. There, you can easily reach close to 100 mph, all the while setting yourself up for the straight where your right foot really hits the mat. With 150 mph on the digital instrumentation, and a tight right turn fast approaching, I was particularly grateful BMW’s carbon ceramic brakes. They’re optional, but I’d highly recommend checking that box on the order form, as they make a significant difference to how the M5 performs. 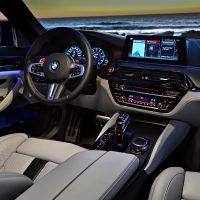 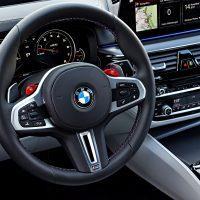 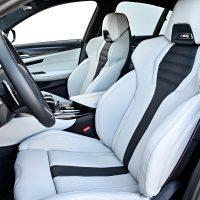 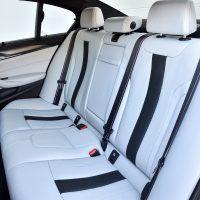 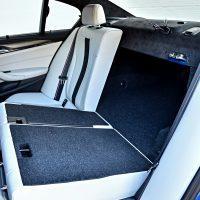 Altogether, when you combine a beastly engine with a fast transmission, stiff but adaptable chassis, and then glue the whole thing together with the M xDrive AWD system, the M5 is an unusually confidence-instilling sports sedan that does its level best to make you look good on the track or on the road. Factor in the usual F90 5 Series creature comforts inside, with plenty of leather, real metal trim, and more, and this is a car that’s just as much at home playing executive limo as it is compressing your internal organs into a small, gleefully-squealing lump wrapped around your spine. For that, even with a base price of $102,600 plus destination (though the car you see here proved significantly more expensive once the bells and whistles were factored in), the 2018 BMW M5 adds up nicely. Driving enjoyment comes first, just like that M badge has always promised. 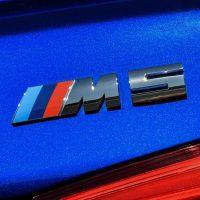 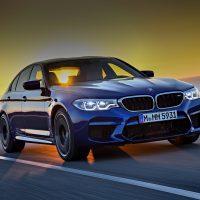 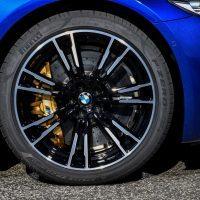 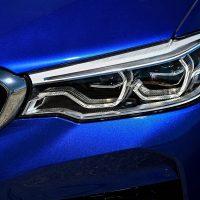 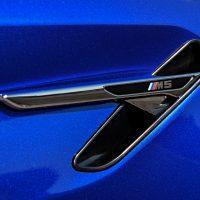 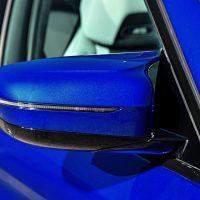 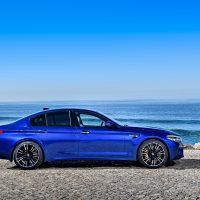 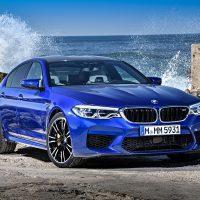 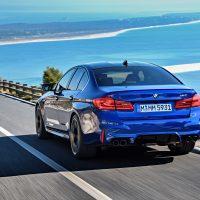 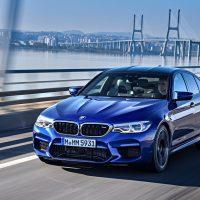