The 2018 Stelvio Quadrifoglio is always fast, all the time, regardless of what drive mode you’re in. How could it not be, endowed as it is with 505 horsepower and 443 lb-ft of torque oozing out of a glorious, 2.9-liter twin-turbo V6 engine? If there’s only one take-away from my first impressions of this overpowered crossover, it’s this: brace yourself, whether you’re driving or just along for the ride.

Like its sibling, the Guilia Quadrifoglio, the Stelvio Quadrifoglio was bred from the ground up to be a sports car – it just so happens to have been born a midsize SUV. Crowned as the fastest SUV, that’s no manufacturer hype: if you’re buying your next crossover on 0-60 mph performance alone, then this is your car. The Alfa’s 3.6 second dash, edges out even the Giulia Quadrifoglio sedan by 0.2 seconds. Mercedes’ GLC 63 S Coupe, GLC 63 SUV and – the primary target – Porsche’s Macan Turbo with Performance Package come in at 3.7, 3.9 and 4.2 seconds, respectively. No chance.

Still, unless you’re trying to outpace the Camry (or state trooper) from a stop light, 0-60 doesn’t really tell you much on real roads. That’s why Alfa Romeo brought us to the Circuit of the Americas, the perfect playground to demonstrate why rapid changes of speed are essential to setting a good lap time. Take turn 11, for example. Your approach is fast, but then you scrub of a ton of speed before a left-hairpin turn, by which point you’re down to nearly 40mph. That’s not a dead stop, no, but on a racetrack it might as well be. 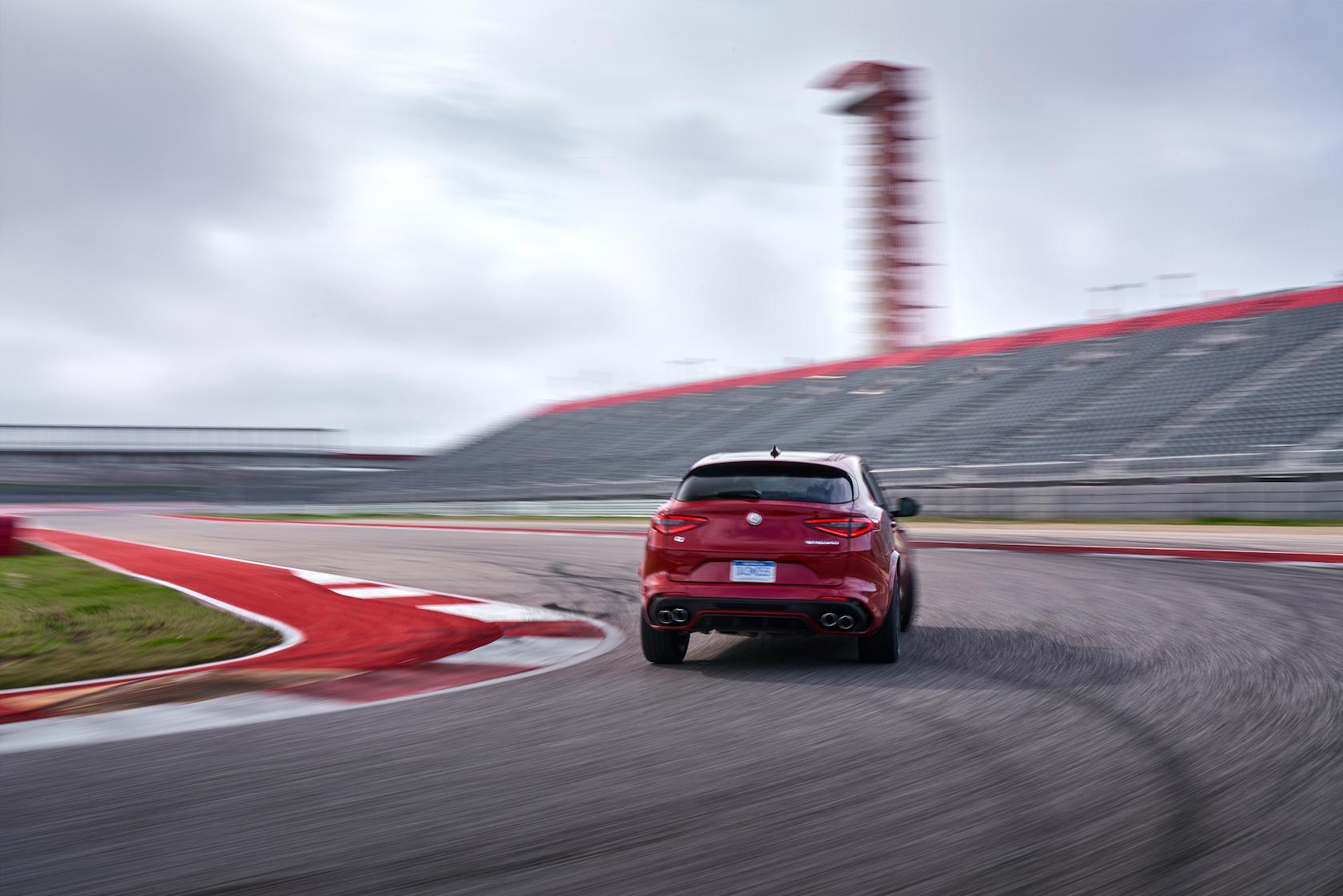 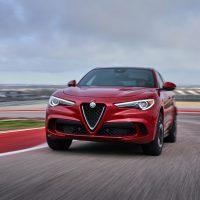 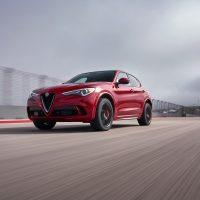 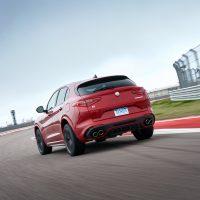 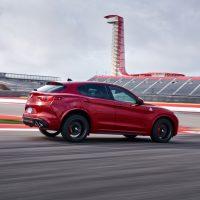 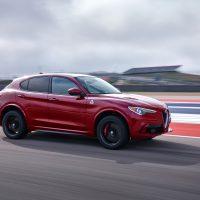 You need to pick up the pace, and fast, and you’ve got a one kilometer (0.62 mile) straight to do it on. With turn 12 in the distance, it’s time to smash the right pedal, and that’s where all those horsepower and max torque kick in. Hold things at around 2,500 rpm through the turn sets the Stelvio up for its peak power, which caps out at 5,500.

Once you get past the blistering acceleration, it evolves into a challenge. Handled right, Alfa’s instructors told me, the Stelvio Quadrifoglio could hit 137 to 140 mph on that straight, before I needed to slam on the brakes. For the first dozen laps, though, I couldn’t get higher than 133 mph; at least, not until I did two things: figure out how to carry more speed through the turn, and wait longer to brake.

Easier said than done, of course, but definitely possible – particularly when someone else is supplying the track, the fuel, the tires, and the optional ceramic brakes.

Before I could get anywhere close to nailing turn 11’s hairpin, mind, I had first to understand the car. At its core is the sizable control down in the center console, Alfa’s DNA Pro selector. My first realization was that, until now, I’d been driving in Dynamic mode. That’s the most aggressive that the regular Stelvio offers but, while it’s still fast performing in every respect – right down to holding the transmission shift point longer, and favoring 100-percent rear wheel bias unless it detects trouble up-front (at which point it can push up to 50-percent of the torque to the front wheels through a carbon fiber propshaft) – safety is still a priority too. Certainly, courtesy of the rear differential and active torque vectoring there’s plenty to reward keen drivers in Dynamic mode, but it also meant the traction control made an unwelcome appearance when I tried to provoke some oversteer and drift into the turn. Up until this point, my approach speed was pushing 100 mph before, unfortunately, I had to scrub down to 34 mph just to make the hairpin.

Rotating the DNA Pro knob up to Race relinquishes the system of all nannying duties: you’re on your own. A single scrap of reassurance remains, with the Quadrifoglio deigning to get involved should you find yourself in a rollover situation. By that point, of course, your regrets might well outweigh the benefits. Still, this is where I found the additional 4-5 mph needed to get me to my goal of 140 mph by the time the Stelvio Quadrifoglio flew past the Geico sign on the back straight.

As with all performance cars, going cheap on the brakes can cost you. Even if you’re not planning on tracking this $82k SUV ($92,290 price as tested), I’d highly recommend the optional carbon ceramic Brembo brakes. Sure, they’re another $8,000, but when you’re approaching a 90-degree left-hand turn at blistering speed, you need to trust that the car will stop with as much urgency as it pulls away. That’s doubly the case when you’re in the soaking wet conditions that faced us on our drive.

Alfa Romeo had shod the Stelvio Quadrifoglio in Pirelli P Zero summer tires – 255/45R20 at the front; 285/40R20 at the back – and they did a good job keeping all four corners planted on the road. Not so much, though, on the track. Now, I recently came off of an ice driving academy with AMG, so I’m still a little giddy when it comes to drifting around. It certainly doesn’t take much to provoke that in the Stelvio on the track in Race mode. Here’s the dilemma, though. In Dynamic mode, there’s a little bit of overreaction on the brakes, limiting power through tighter turns: the torque vectoring does its job of getting you around corners as cleanly as possible. Race mode’s slippage is certainly more fun, but time spent going sideways does mean a slower overall speed around the track.

It’s not the only thing you need to bear in mind. The Stelvio Quadrifoglio’s torque curve is pleasantly wide and admirably flat, but it does peak out at 5,500 rpm. Given just how powerful the engine is, it’s all too easy to soar up through to the limiter and get behind on your manual shifts. I found it was easier to listen to the engine noise than keep glancing down at the tach, with the powertrain seeming happiest when I snapped the gracious, elongated aluminum paddle-shifters at around 5,000 rpm. 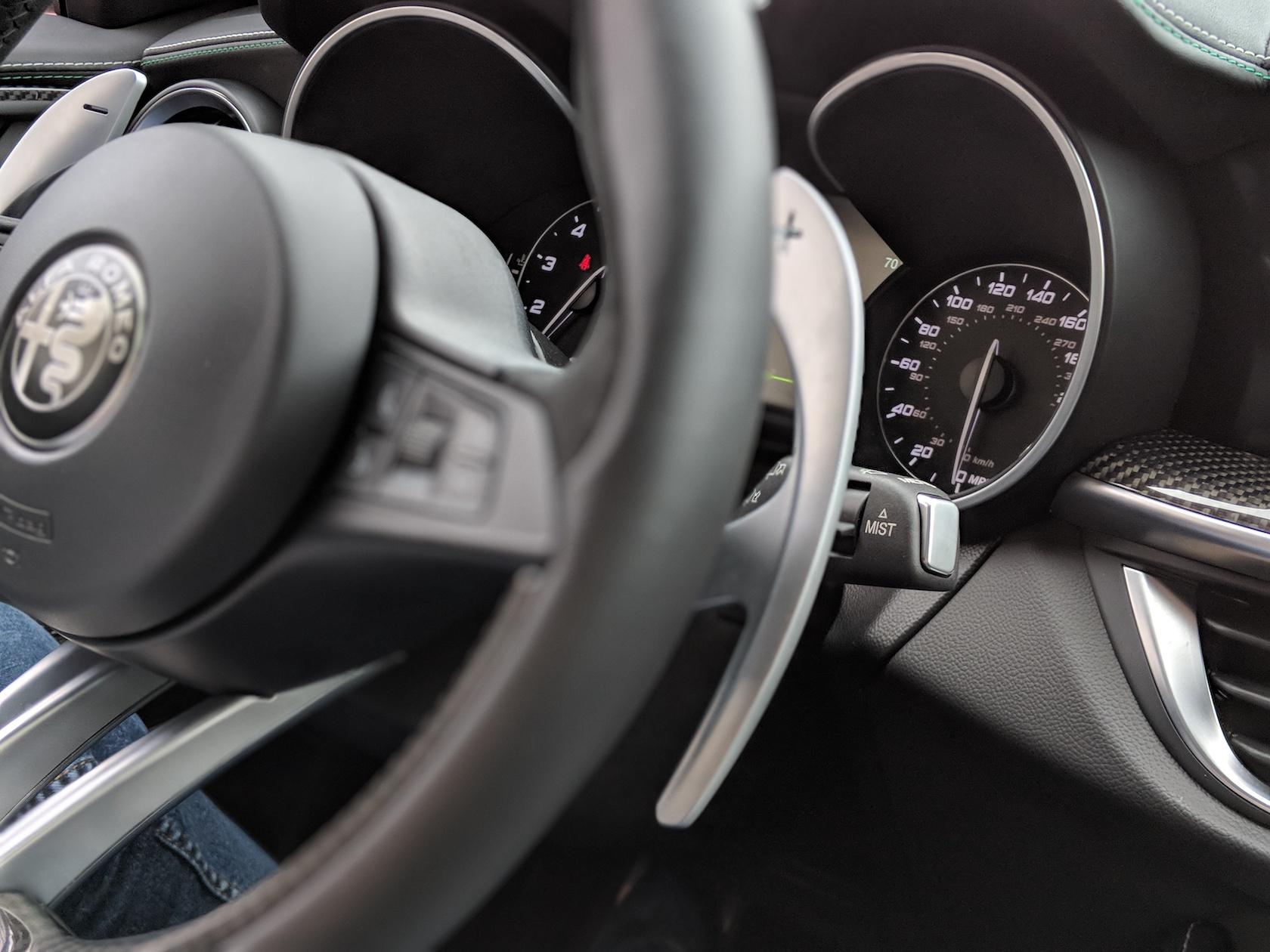 The ZF 8-speed automatic transmission is quick and, at more than a few times on the track, definitely did a better job determining the right gear to be in than me. Chassis Domain Control, meanwhile, never left me wanting for power at the front or rear, as it pushed torque to each axle; similarly, the Quadrifoglio’s torque vectoring did the same with power left and right. All in all, Alfa Romeo has proven to me that this particularly Stelvio is indeed a track-worthy-SUV, whether or not you opt for the optional $3,500 carbon-fiber-backed racing bucket seats.

So far so good, then, but that does lead us right into the 2018 Stelvio Quadrifoglio’s biggest conundrum: was anybody really asking for a crossover that could lap the Nürburgring in a record-breaking 7:51.7 minutes?

It’s a question I found myself considering at length when away from the track, and focusing more on the Alfa’s everyday creature comforts than how it handled an F1 car’s playground. The cabin is comfortable and reasonably well-equipped, but it still falls short of what those Mercedes and Porsche will surround you with. The Stelvio’s infotainment system is finicky and feels oddly constrained on a too-small touchscreen.

Most pressing, though, is how everything that makes the Quadrifoglio handle so aggressively on the track translates to a jarring experience on the road. Sure, it can be fun behind the wheel, but even with the suspension settings at their softest, it’s a jarring experience for everybody else. A small bump in the road as we left COTA was enough to almost send a cup of coffee flying from my hands. The brakes – even softened a little for North American tastes – force you to press cautiously lest you bunny-hop. Alfa’s laser-direct steering goes straight past nimble and into twitchy with anything other than zen-like poise at the wheel. The Stelvio lives in a rose-tinted world of silky smooth asphalt; the reality means that any attempt at spirited driving will shake up your family like the contents of a NutriBullet. 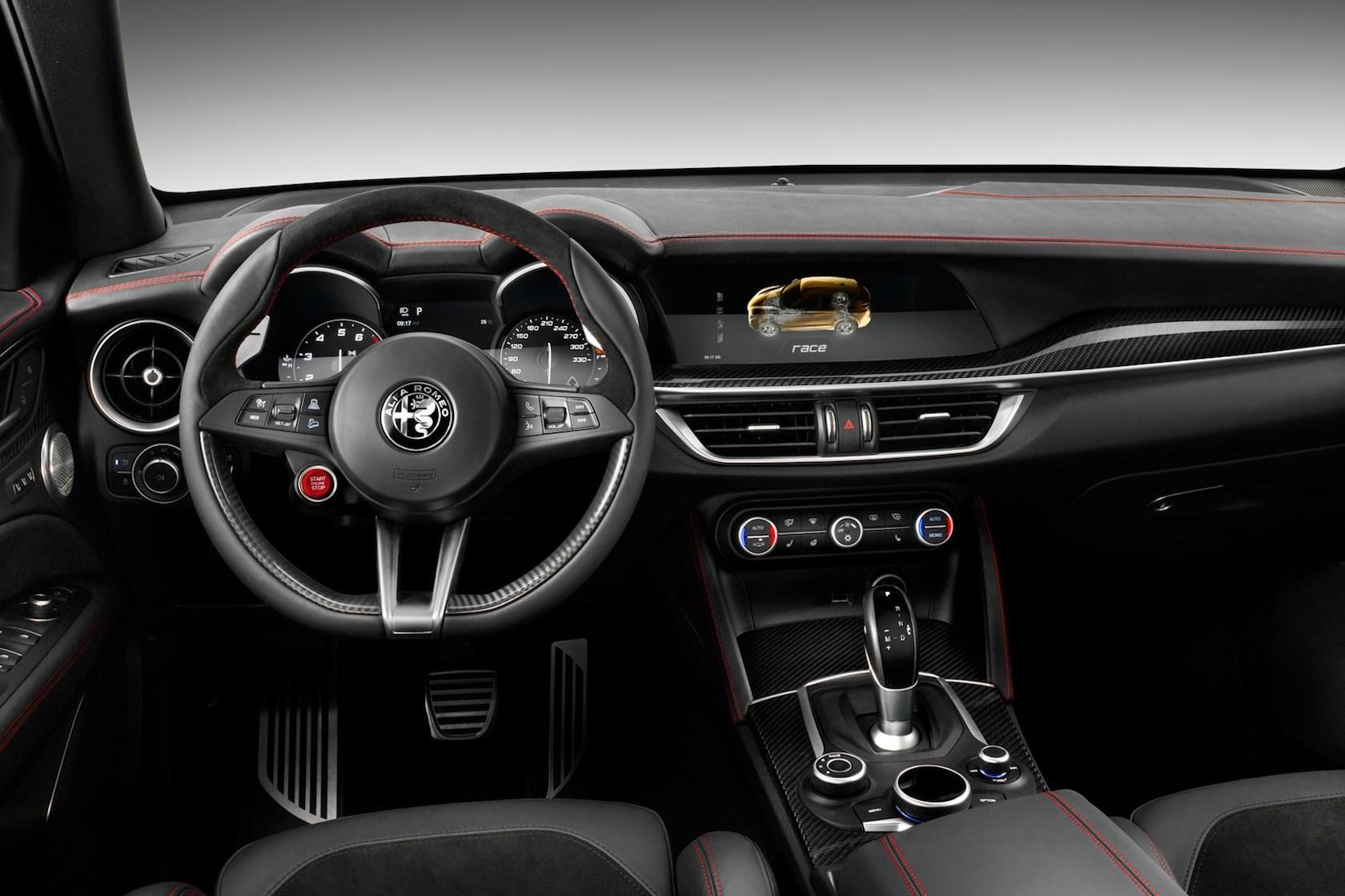 That preconception of perfect roads proved abundantly clear in the Porsche Macan Turbo that Alfa provided for side-by-side comparisons. The German crossover does a significantly better job ironing out bumps in the road and, while that compliance may cost it time on a track, I suspect the majority of SUV buyers will be content with Porsche’s compromise. Mercedes’ upcoming GLC 63 S Coupe, meanwhile, could well be even more livable as a daily driver, not to mention throwing in more in-car tech; alternatively, Audi’s SQ5 kicks off at just over $55k and, while down on horsepower, doesn’t sacrifice driving dynamics or cabin gadgetry. 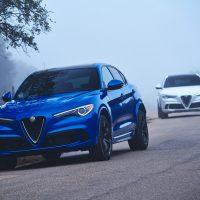 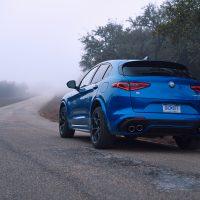 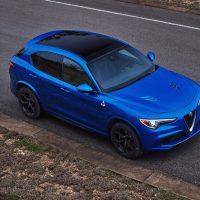 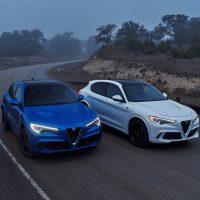 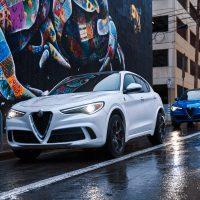 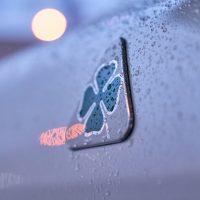 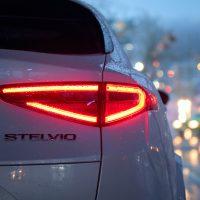 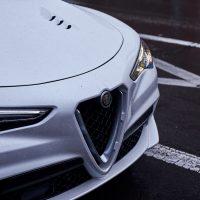 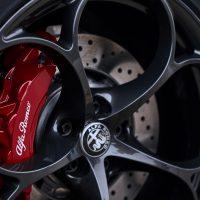 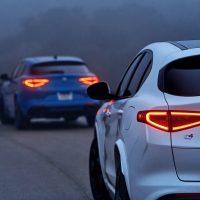 Where, then, does that leave the 2018 Alfa Romeo Stelvio Quadrifoglio? More than admirable on the track, it’s a crossover that missed the message that the “Sports” in SUV was only ever marketing. For all you twist that DNA Pro selector, there’s no escaping the Quadrifoglio’s genetics: the driver has fun, while everybody else holds on and tries not to let their teeth be shook loose. Compared to the rear-wheel-drive Giulia Quadrifoglio the Stelvio’s standard AWD should pay dividends when faced with snow or ice but, whether you go for crossover or sedan, it’s clear that Alfa Romeo’s finest pander only to whoever is behind the wheel. Explaining that decision to your passengers is up to you.