The Nissan Pathfinder used to be an adventurous, off-road sport-utility vehicle, then one day Nissan decided to switch gears. For better or worse, depending on who you talk to, it’s no longer the same vehicle as it was before 2013; had Nissan renamed it, in fact, I don’t think it would have had any arguments. What was once a rugged icon in the automotive industry has evolved into an everyday people hauler. That means it’s definitely roomier and more comfortable for the kids in the back, but what is it like for the person actually behind the wheel?

Nissan improved the 2017 Pathfinder’s single engine option, a 3.5-liter V6, but still pairs it with a continuously variable transmission (CVT). They’ve added new pistons, a revised air intake, direction injection, variable intake-valve timing, a higher compression ratio, and low-friction cylinder coating, all helping to squeeze out 284 horsepower and 259 lb-ft. of torque (up from 260 and 240 respectively).

Despite the increased power, Nissan managed to keep fuel economy the same at 20 mpg for city and 27 mpg for highway on the front-wheel drive model, and 19/26 mpg for the all-wheel drive. That’s actually mighty impressive, and should put the Pathfinder at the top of its class.

With the increase in horsepower and torque, I honestly expected more get up and go; unfortunately, the Pathfinder didn’t wow me. In fact, when I tested the Pathfinder on the highway, I found myself wondering “where’s the power I need pass this old, beat up VW station wagon?” Stuck at roughly 50 mph behind the VW, I pulled out to make the lane change then attempted to pass the station wagon, and at which point its driver clearly decided “nope that’s not going to happen,” and sped off. The new Pathfinder was left in the dust.

I suspect what’s happening here isn’t a lack of horsepower or torque from the new engine, but how slow the automatic was to respond. Because I had been coasting before I decided to pass another vehicle, the transmission was already in its highest gear. Downshifting was much slower than I expected: I literally watched the RPM climb from 2,000 to over 4,500 RPM before the Pathfinder’s speed changed. That’s hardly impressive and leaves a lot to be desired when it comes to excitement behind the wheel; since the SUV lacks paddle shifters or indeed any way to force a downshift, there’s no overruling the CVT.

It’s a shame, because once the Pathfinder got going I could feel the power and torque kick in. Problem is that’s much later in the torque curve, and until then you shouldn’t set your expectations too high for a speedy surge onto a highway on-ramp.

Could I be an outlier, expecting too much from the Pathfinder? It’s possible, but then again having tested the competition in recent months, I feel Nissan’s new SUV trails the Mazda CX-9, GMC Acadia, and Honda Pilot when it comes to performance and handling.

It drives heavy – even heavier than my Honda Odyssey – and it feels big on the road. Bigger, indeed, than the dimensions would suggest, and less agile and nimble than competitors in the same segment. If there’s a saving grace it’s that, on the short off-road course Nissan had set up, the 2017 Pathfinder took things in its stride.

The Exterior – it is what it is

A few years before the unveiling of the new Pathfinder in 2013, someone decided it was in the SUV’s best interest that it should be more domesticated so as to have broader appeal. While I’m sure this has helped sales, fast-forward to 2016 for the 2017 mid-cycle refresh and it almost feels like there’s an air of regret at what Pathfinder used to be.

Indeed, the key message for the new Pathfinder was that the changes should make it look more masculine. That’s involved tweaks to the grille, headlights, and front bumper all the way up to the hood, as well as additional changes to the taillights with mods to the beefier rear bumper. All the same, despite the designers’ best efforts it has barely made a dent in changing the overall look of the car. 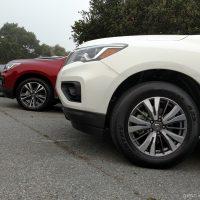 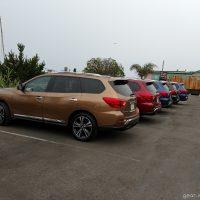 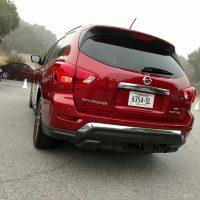 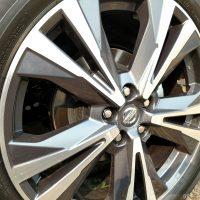 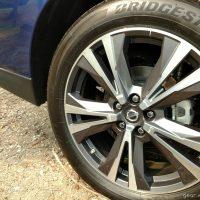 What Nissan needs to do is keep what made the Pathfinder a Pathfinder and tweak it for today’s buyers. They could do worse than look to GMC’s example: keeping the best of what customers love about the Acadia, drop what didn’t work, finesse out the curves, add some creases and voila, you have a modern day SUV with abroad appeal.

The Interior – nothing to write home about

As you might’ve expected, the Pathfinder doesn’t get all the features Infiniti offers in its cousin, the QX60. Indeed, if I were in the market for a 7-seater and wanted a high-end cabin in the low to mid $40k range, once again the Pathfinder would be number 4 or 5 on my shortlist. The luxury offered on the CX-9 and Acadia is just shy of awesome, and you get so much more bang for your buck. 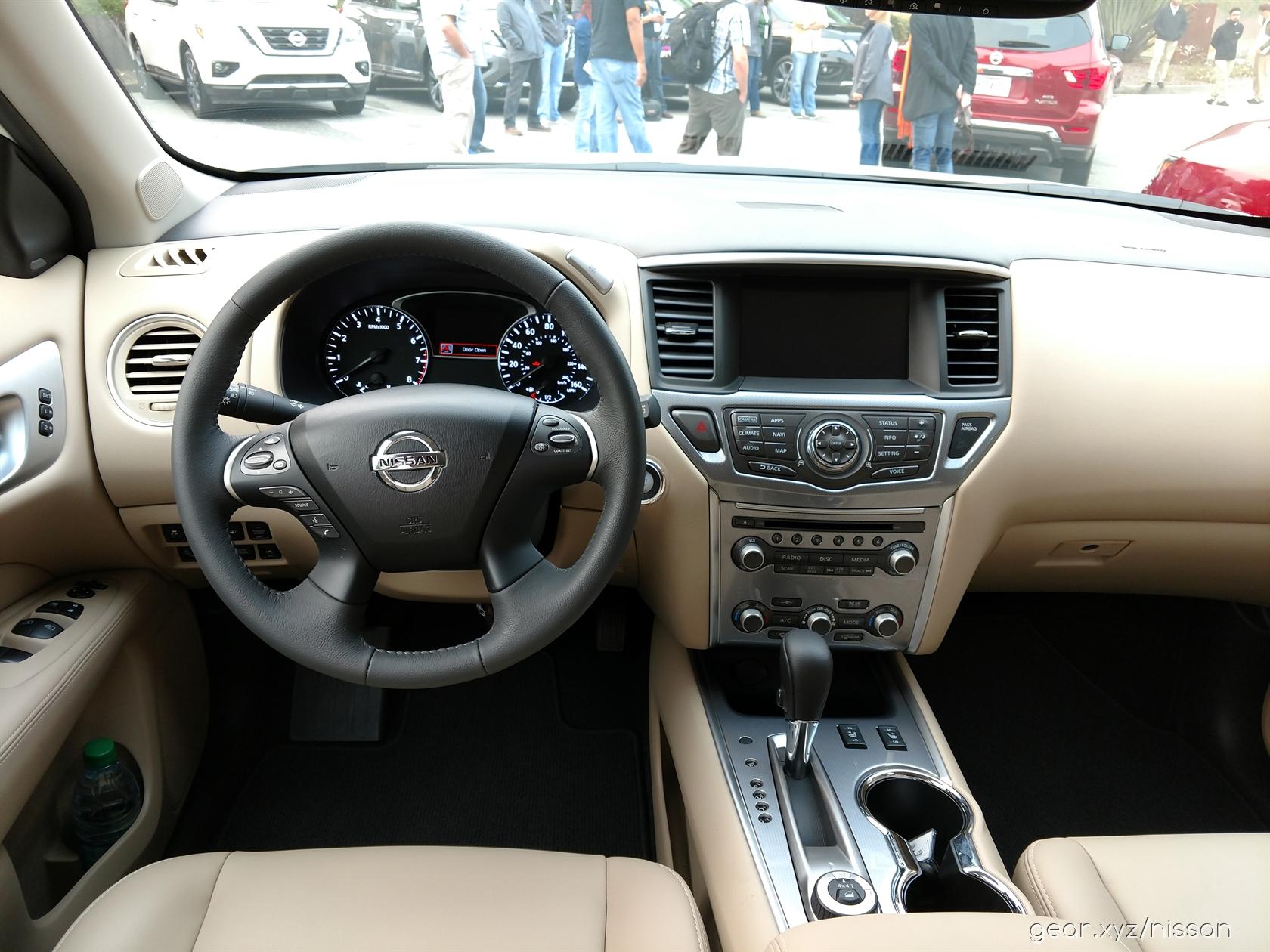 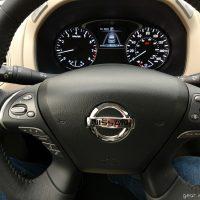 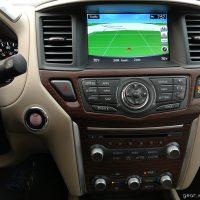 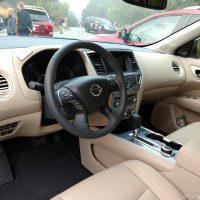 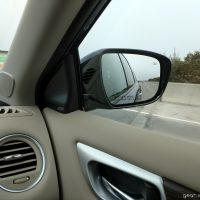 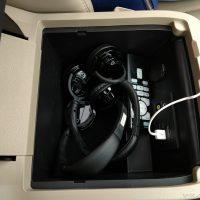 I drove the top-spec Pathfinder with the fancy wood trim, which errs on the plasticky, unnatural side to my eyes. Would it grow on me? Probably. Would I grow to love it? Probably not. Nissan needs to step it up a couple of notches. Sitting inside the Pathfinder, it almost felt like the designers were given the task of sketching out the new cabin with one arm tied behind their back: it feels unfinished and half-hearted. It’s a shame, because Nissan has demonstrated with cars like the Maxima that it can get interiors right.

Speaking of the strange wood trim, that’s only for the highest trim level, the Pathfinder Platinum. Another odd decision is to only offer the active driver assistance and safety equipment on the Platinum: you simply can’t have features like forward emergency braking and adaptive cruise control on other trim levels.

The basics, at least, are solid. The seats are comfortable and, of course, in the higher trims there are soft-touch materials at key touch points. Plenty of head, hip, and leg room in the second row too, though the third row is less than comfortable for a full-grown adult. Despite Nissan’s boast that the second row seats will lean forward even with a child seat in place, it would still be difficult to climb in and out.
As for the infotainment, the touch display I tested was slow to respond both to taps and multitouch gestures, and though these were pre-final software cars, I have to say it all felt like an old Android phone. Speaking of Android, Android Auto isn’t available and neither is Apple CarPlay: Nissan tells me that the hardware simply isn’t there to support them. Not a total deal-breaker, no, but I do feel you shouldn’t have to wait for an all-new model year to get basic tech features that the competitors have on offer.

As a dad, I’m super-conscious about the safety of my kids so Nissan’s high scores in crash testing are important. That being said, are they enough to sway me? Probably not.

While the Pathfinder is doing well, even surpassing Nissan’s Murano in sales, it desperately needs a full redesign with particular attention paid to the interior in order to level out the playing field against the competing vehicles. Right now, families with 7-seat needs are spoiled for choice, and the 2017 Nissan Pathfinder doesn’t do enough to stand out of the crowd.