Regime change doesn’t have to be bloody. Sometimes, the weight of new ideas alone is sufficient to push out the lingering elements of old-school thinking, creating a void where innovation floods in to fill the vacuum with a renewed sense of purpose. The 2017 Cadillac XT5 crossover represents the latest, and perhaps capstone chapter in the automaker’s near-total makeover from luxury also-ran to legitimate contender for high end family dollars – and the only shots fired are in the direction of Tokyo, where the Lexus RX 350 finds itself facing its toughest challenger in over a decade.

The past 10 years have presented a parade of alphabet soup from Cadillac as it sought to shake off a reputation for chasing short-term profit at the expense of world-class engineering development and build quality. The journey towards respectability has borne exceptional fruit, with the Detroit-by-way-of-New-York-based builder now boasting a showroom stocked with class-competitive choices at every step of the ladder. 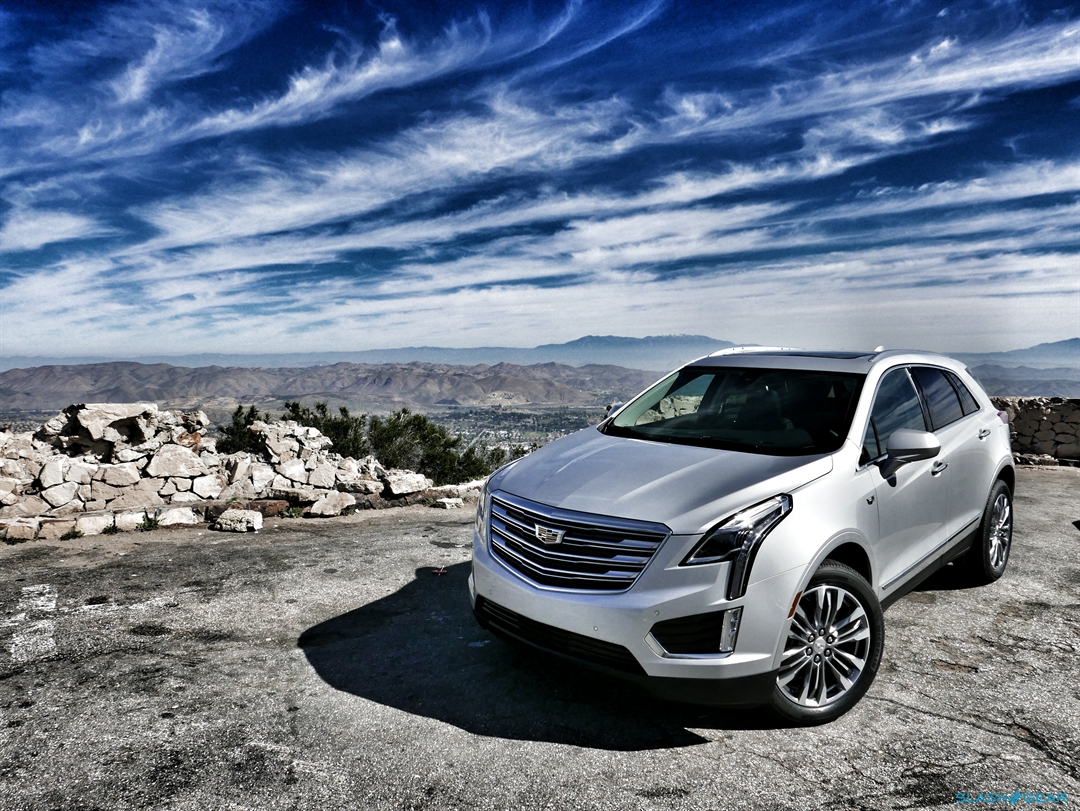 Missing, however, was a follow-up to the Cadillac SRX, a popular mid-size people mover that had grown long in the tooth. Although still moving metal, the SRX could no longer said to be on par with options like the Audi Q5, the BMW X5, or the segment-leading five-seater from Lexus. After a flurry of attention devoted to its family of sedans, Cadillac has finally birthed the 2017 XT5 into the world to take care of the crossover side of the business.

Visually, the clean-slate nature of the 2017 Cadillac XT5’s design is apparent. At the same time sleeker (in profile) and more muscular (especially as seen from the front) than the SRX that it replaces, there’s plenty of modern crest-and-wreath(less) character to be found in the broad grille and the LED lights that frame it, as well as the by-now trademark LED taillights serving to book-end the design’s two luminescent poles. It’s a crossover with definite presence, but not one that jostles to the front of the line and demands attention in the same way that it’s larger Escalade sibling does. This understated classiness will undoubtedly play well with a significant range of customers, and it stands in stark contrast to the over-styled efforts of several rivals. 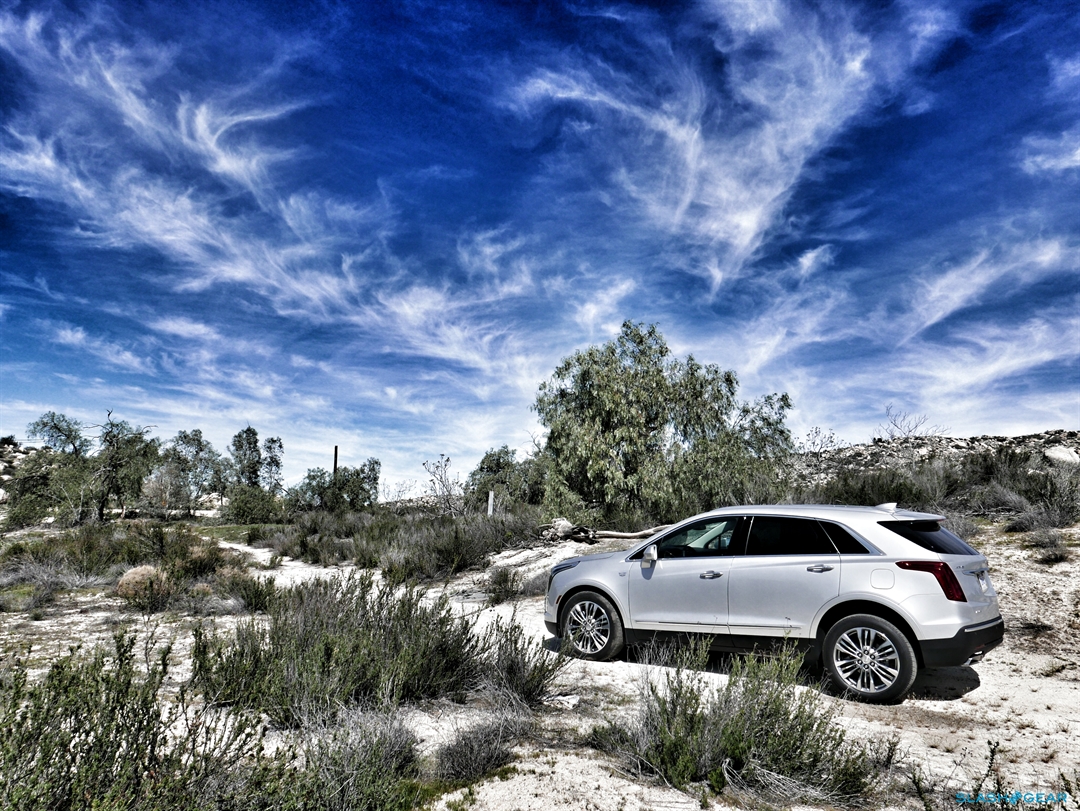 Inside, it’s a similarly reserved story, with the XT5 showing a cabin that avoids overwhelming passengers with a barrage of buttons, dials, or touchpads in a bid to keep things clean and simple. The asymmetrical dashboard is outlined by thin chrome wings that intersect diagonally at the center stack, which houses the CUE infotainment screen and a handful of capacitive touch controls for interacting with it. The console is kept clear of anything other than the vehicle’s shifter – itself a new design for Cadillac – and a button for rotating through the vehicle’s three drive modes. 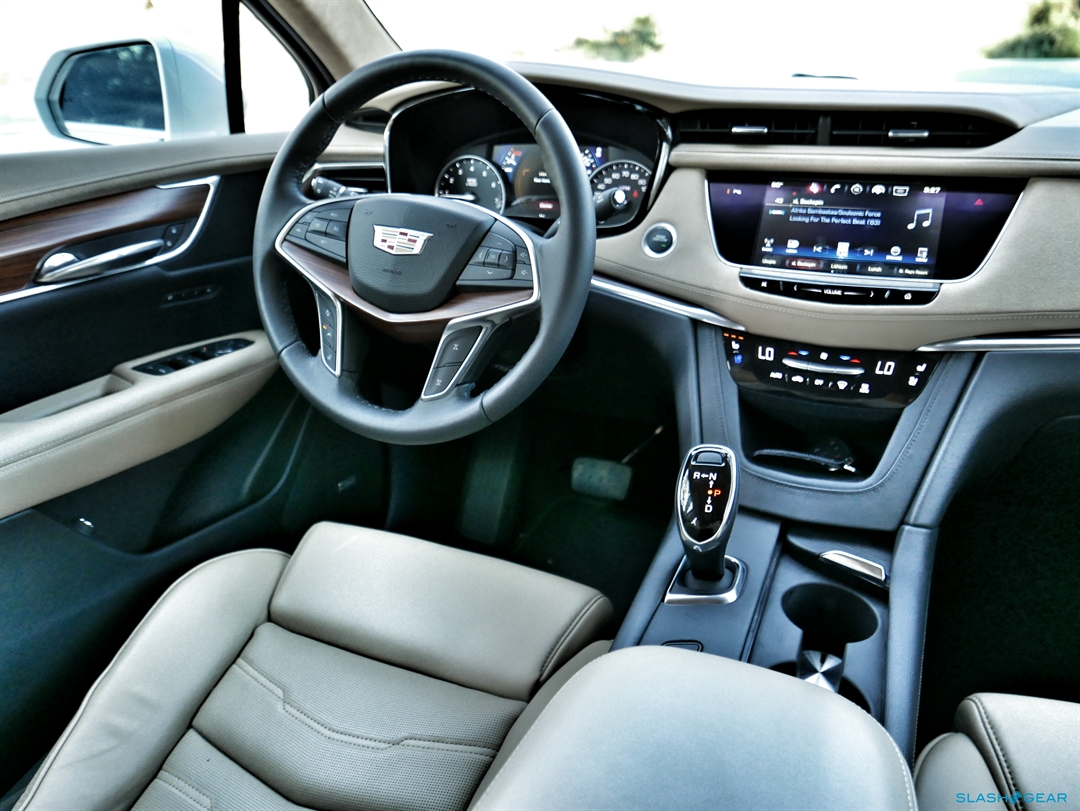 The materials used throughout the Cadillac XT5 of course vary with the price point and package at which you encounter the vehicle. Nicely turned-out in Luxury and Premium Luxury trims (one and two steps above the $38,995 base price, respectively), the XT5 really comes into its own when experienced in the fully-loaded Platinum model, which makes use of genuine wood trim and soft and carefully-stitched leather to give weight to its $62,500 window sticker. There’s ample room at all five seating positions, a testament to the vehicle’s two-inch wheelbase boost over the departed SRX (all of which went to second row riders, who enjoy a 3.2-inch increase in legroom), and cargo space checks in at a useful 63 cubic feet. 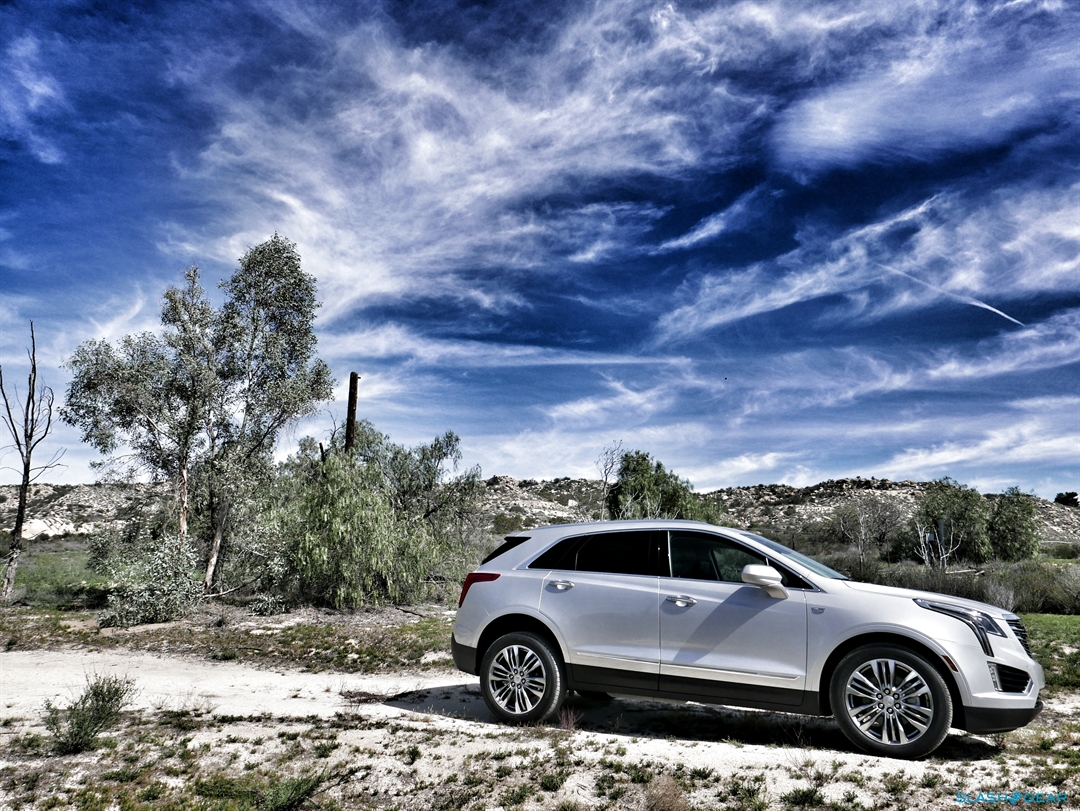 Cadillac set me loose on the up-and-down roads surrounding Julian, California in order to experience the 2017 Cadillac XT5’s all-new chassis, with just enough rush hour traffic mixed in to properly simulate the crossover’s natural day-to-day environment. Featuring a 3.6-liter V6 producing 310 horsepower and 272 lb-ft of torque, the XT5 is available in both front-wheel and all-wheel drive editions, and is shifted via an eight-speed automatic gearbox. 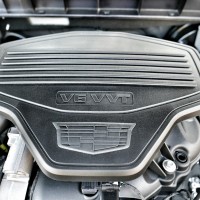 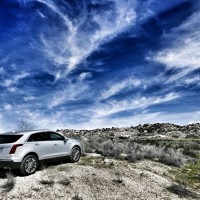 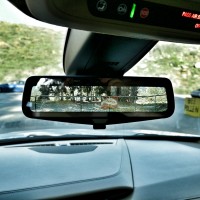 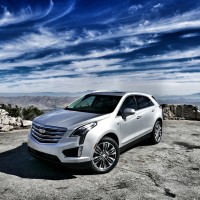 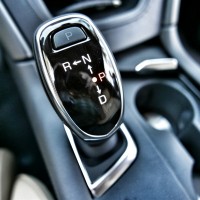 The XT5’s all-wheel drive system is a twin-clutch design that in Touring mode keeps the rear wheels disconnected from the drivetrain unless wheel spin is detected, in which case their traction is leveraged for stability and to maintain forward progress. This is a fuel-saving measure that works alongside the vehicle’s automatic engine start/stop feature and cylinder deactivation capability to permit an EPA fuel mileage estimate of 19-mpg city and 27-mpg highway (a two and three mile per gallon improvement over the SRX, respectively). Choose ‘All-Wheel Drive’ or ‘Sport’ mode and the system offers a more nominal torque split front and rear, with the latter setting providing heavier steering and the ability to shuttle power from wheel-to-wheel in a bid to improve handling. 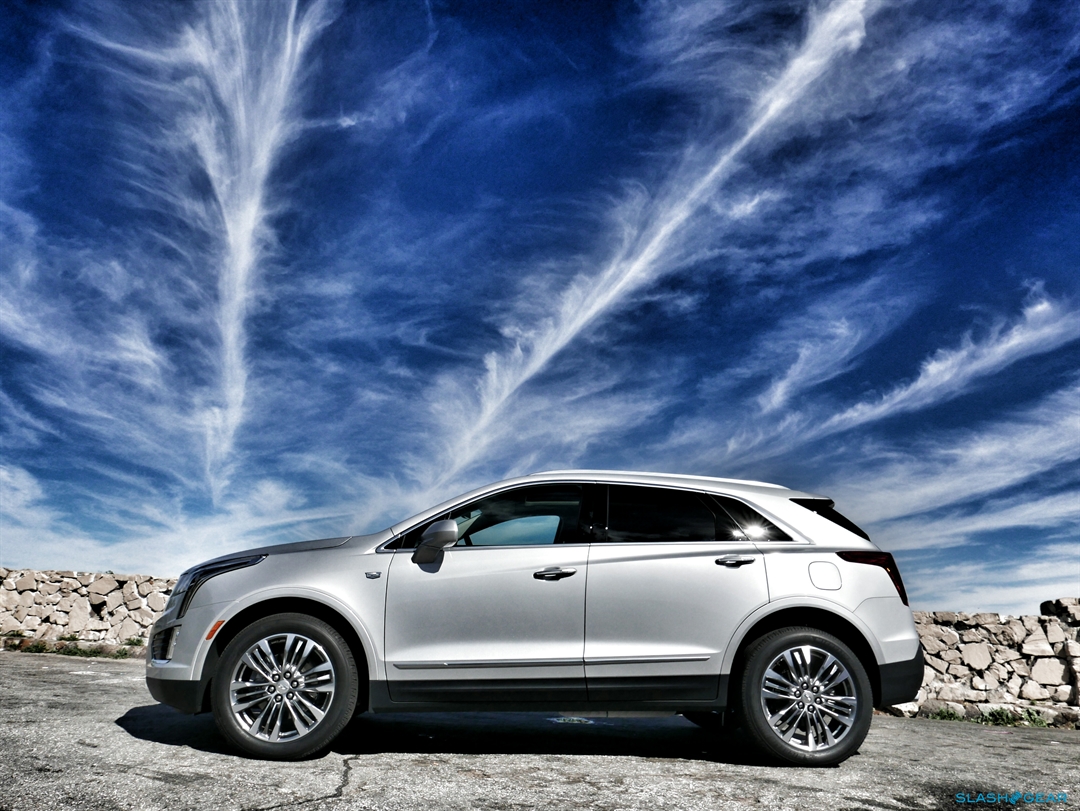 Other than a brief stint on a sandy off-road hill, the Cadillac XT5’s all-wheel drive operation was entirely transparent, even when sailing downhill through switchbacks. At no time did the crossover’s stability feel threatened by the rate of travel or the decreasing radius of some of the corners I encountered, and I was surprised by just how competently the XT5’s adaptive suspension system handled the more challenging sections of road. Power delivery from the 3.6-liter motor was more sufficient than sporty – and it can’t hold a candle in a straight line to the 2.7-liter EcoBoost V6 in the Lincoln MKX, which crushes it with 380 lb-ft of torque – but most buyers won’t care, as it’s perfectly in keeping with the commuter-friendly design brief its engineers had been presented. 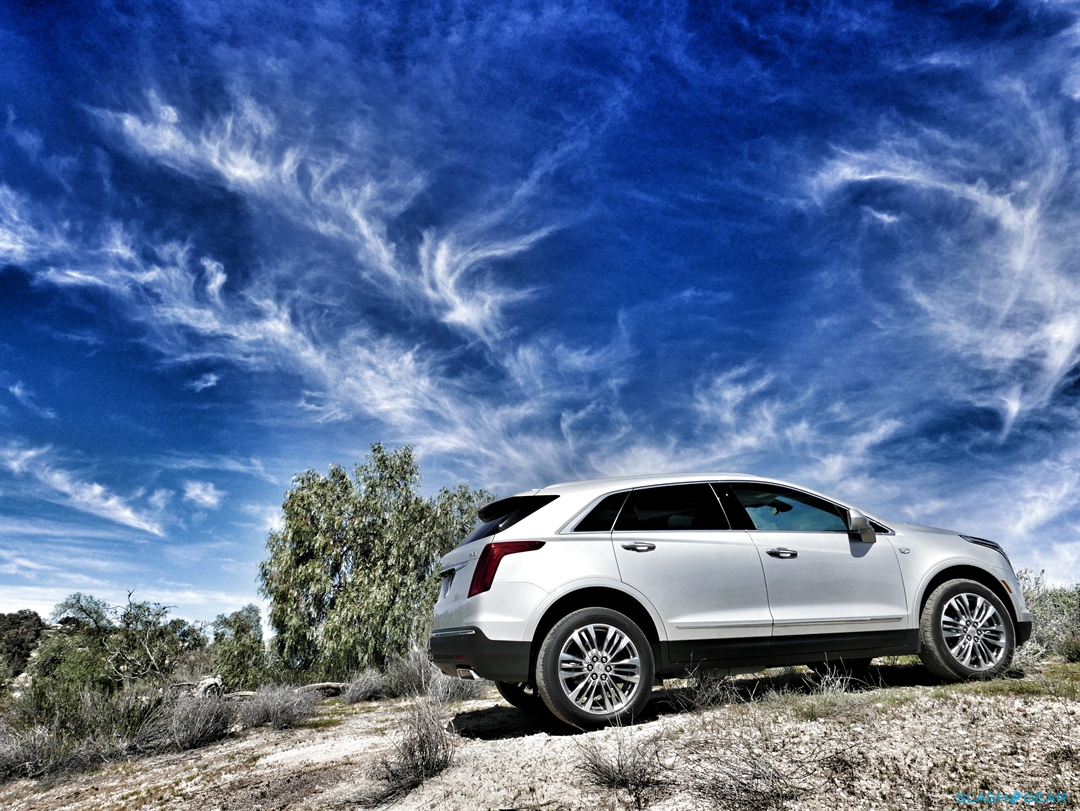 The other unexpected aspect of the Cadillac crossover’s personality was how exceptionally quiet it was at all speeds. No wind noise troubled the cabin, nor was the serenity shattered by booming pavement bumps or rattling trim pieces (the models I drove were pre-production). The XT5’s passenger compartment was so well insulated even in lower trim levels that the vehicle felt far pricier than it actually was, which is always a win for a luxury brand.

Are there aspects of the 2017 Cadillac XT5’s new design that overreach their grasp? Certainly. While features such as the automaker’s vibrating Safety Alert Seat and various active safety systems worked well, the available rear camera mirror and its composite high definition video image (also offered in the new CT6 sedan) feels very much like the answer to a question no one was asking (and takes some getting used to). Other missteps include the vehicle’s electronic shifter, which comes across as clunkier than a traditional implementation, especially when shifting into reverse, and the CUE system’s poorly-placed volume slider, which is just sensitive enough to activate when resting your hand on the infotainment screen’s frame but somehow just the opposite when trying to make your music louder. 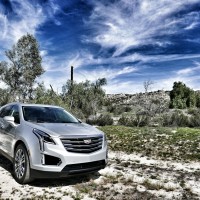 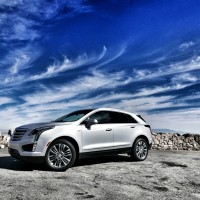 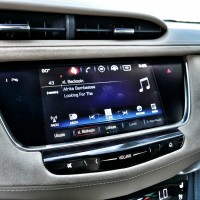 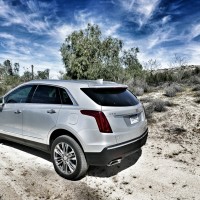 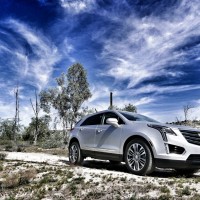 These specific complaints aside, the 2017 Cadillac XT5 is a startling accomplishment. Here is a crossover that offers the space, the coddling, and the driving experience necessary to separate from the rest of the mid-size pack and make a play to be the new class leader. It certainly doesn’t hurt that the XT5 is far easier on the eyes than its more homogenous European segment-mates or the curiously-outré Lexus RX. The evolutionary leap between the SRX and the XT5 demonstrates that given a long enough timeline, and a strong enough push from the competition, even a brand as deeply steeped in its history as Cadillac can embrace the future without turning its back on what had made it successful in the past.