In a world where full-size trucks are increasingly plush palaces of rolling excess loaded for bear with luxuries that rival traditional premium sedans, the mid-size pickup segment has fallen out of step. For more than a decade these somewhat smaller options – like the class-leading Toyota Tacoma – have focused more on utility than ‘wow’ factor, a symptom of the less significant market that exists for trucks outside the full-size spectrum and the fact that there was so much profit to be made with their bigger brothers.

Of course, things change. A surprise re-up from GM last year saw the Chevrolet Colorado and GMC Canyon graduate from also-rans to comfy daily drivers as the General decided to target would-be crossover shoppers seeking the additional practicality of an open cargo bed with its two mid-size offerings. This left Toyota with a decision to make: should it double-down on what had made the Tacoma a runaway success, or chase a new pickup demographic that might not actually exist when planning out its next model? 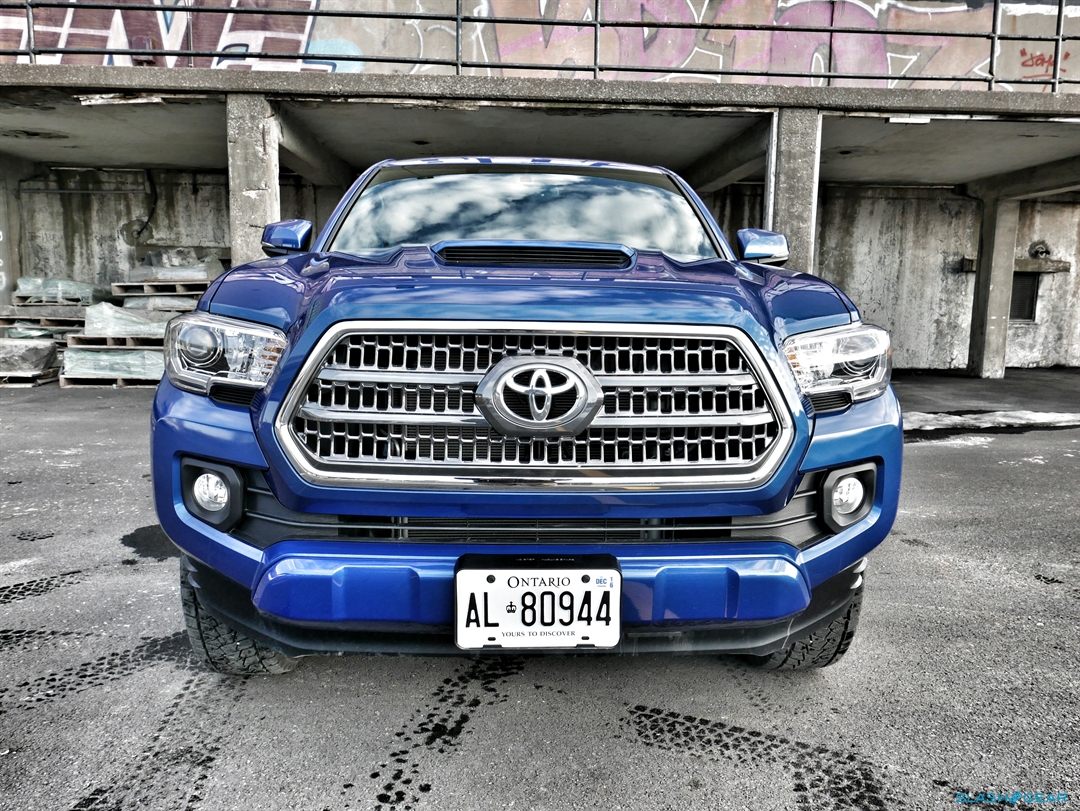 The 2016 Toyota Tacoma lays bare the schism that currently exists amongst mid-size trucks. With a new engine, brash styling, and unchallenged off-road credentials, the Tacoma has got what it takes to satisfy the legions of current Toyota owners looking to re-up with the latest model. Slip behind the wheel, however, and you’re treated to the kind of traditional truck experience that’s been sidelined by full-size models and largely dialed-out of the redesigned Canyon and Colorado.

Make no mistake: the 2016 Toyota Tacoma is an excellent mid-size pickup. You get two choices under the hood, starting with a 159 horsepower, 2.7-liter four-cylinder that can be upgraded to a brand-new 3.5-liter V-6 that pushes out 278 horses and 265 lb-ft of torque. This six-cylinder, which represents a significant upgrade over the 4.0-liter that it replaces, was installed under the hood of my tester, and it’s hard not to recommend paying the extra cash for the bigger motor since there are no fuel savings to be had with the smaller, weaker unit. A six-speed automatic gearbox is the volume transmission for both editions of the Tacoma, with six-speed (V6) and five-speed (four-cylinder) manuals also available. 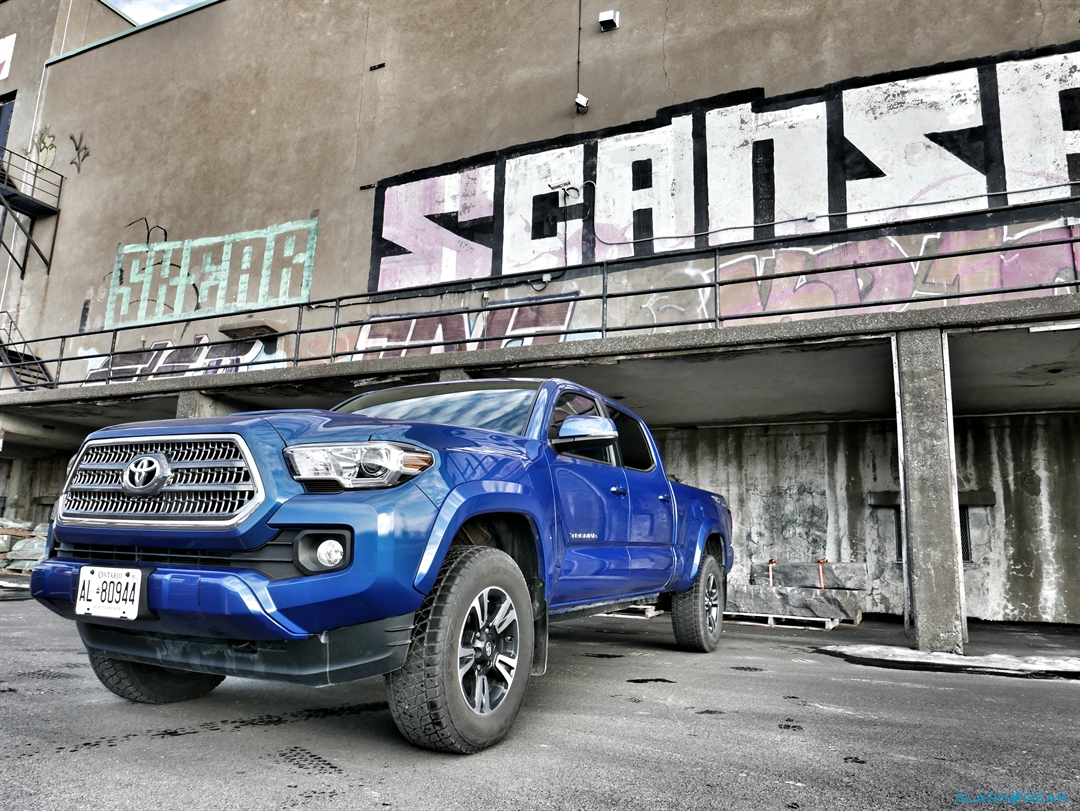 Four-wheel drive is on the options sheet almost across the board for the 2016 Toyota Tacoma, and you can up the ante even further with the TRD Off-Road package. This version of the pickup allows you to take full advantage of the Tacoma’s 9.4 inches of ground clearance, as it features skid plates, a forward crawl control feature (new for 2016), stronger suspension setup, and an electronically-locking rear diff. 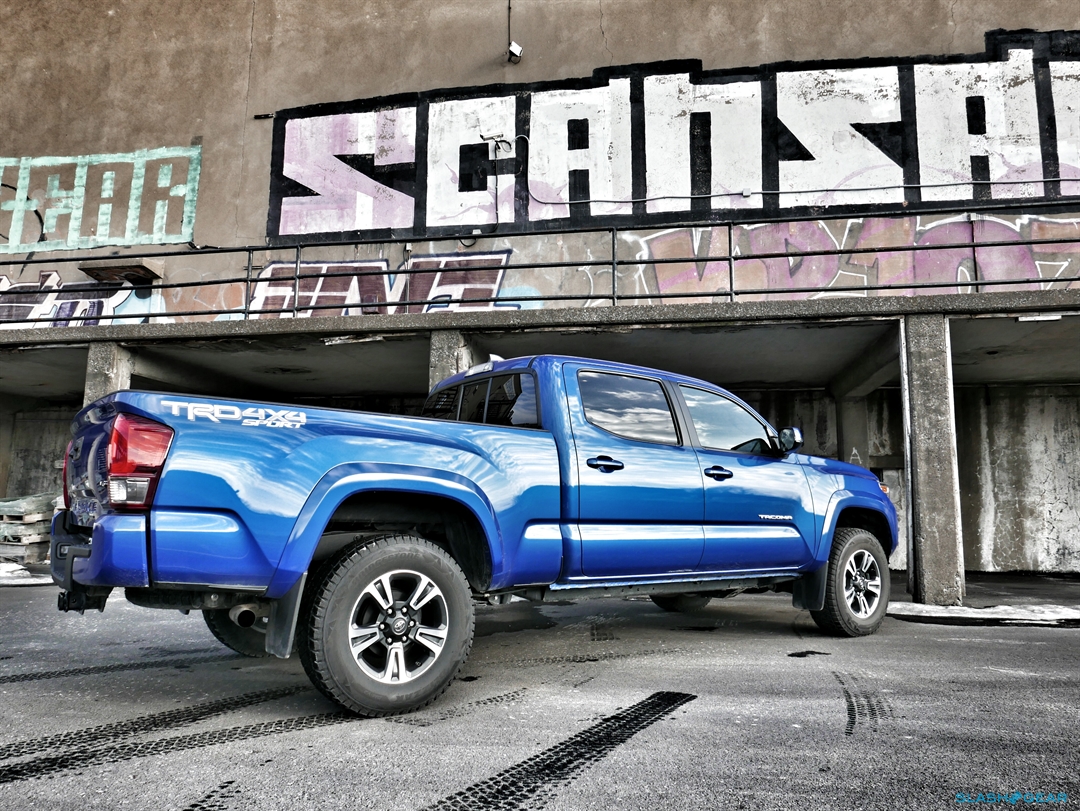 If street performance is more your thing, then the TRD Sport model makes its first appearance for the 2016 model year, and was in fact the model I drove for a week. Although not quite as ‘street’ as the slammed X-Runner that left the Tacoma line-up a few years ago, the TRD Sport still nets you a limited-slip rear differential, unique alloy wheels, stiffer shocks, a hood scoop, and searing blue paint. 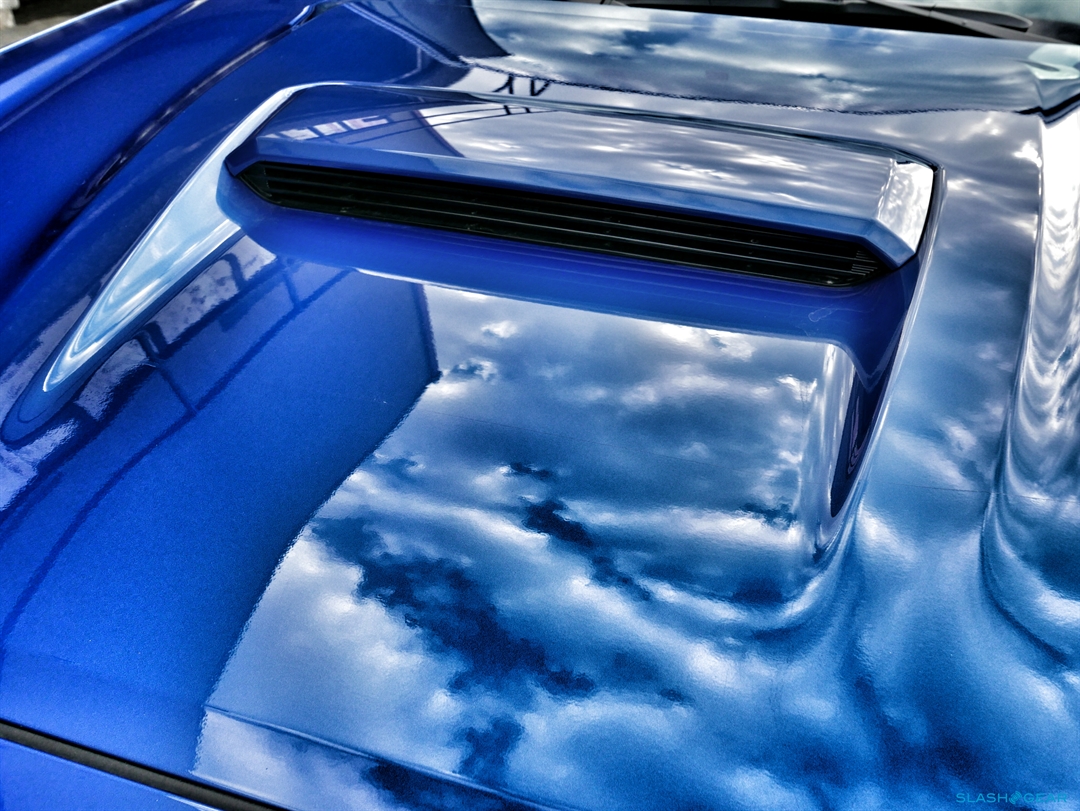 Unfortunately for performance enthusiasts, the TRD Sport really doesn’t drive any differently than any other four-wheel drive version of the new Tacoma. That is to say, with a chassis largely unchanged from the previous-generation pickup, drum brakes at the back, and prodigious weight to overcome, acceleration and handling are exactly in keeping with what you might expect from a truck of its size, and the Toyota’s on-road personality will be familiar to anyone who has driven the Tacoma before. 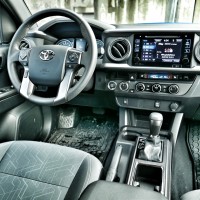 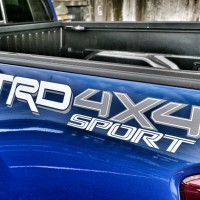 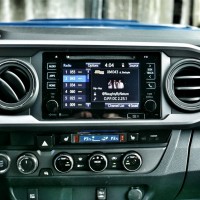 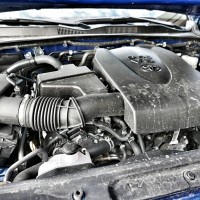 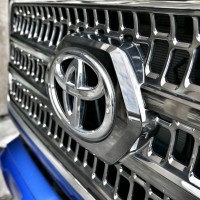 This ‘business as usual’ attitude extends to the pickup’s interior trappings, which are the very definition of task-oriented. I like the big, easy-to-grasp buttons and toggles, but wasn’t such a fan of the Entune infotainment interface, whose seven-inch touchscreen seemed behind the times in terms of graphics and functionality. The Tacoma is available in a pair of five-passenger body styles (front-hinged doors on the Access cab and full-size rear doors on the Double cab), and the Double I drove had plenty of room in the rear row for both people and cargo. Don’t look for anything resembling high end trim inside the Toyota, however, as even the Limited’s leather can’t mask the simplicity of the truck’s design. The Tacoma is also light on active safety, with only blind spot monitoring making the final cut on the options sheet. 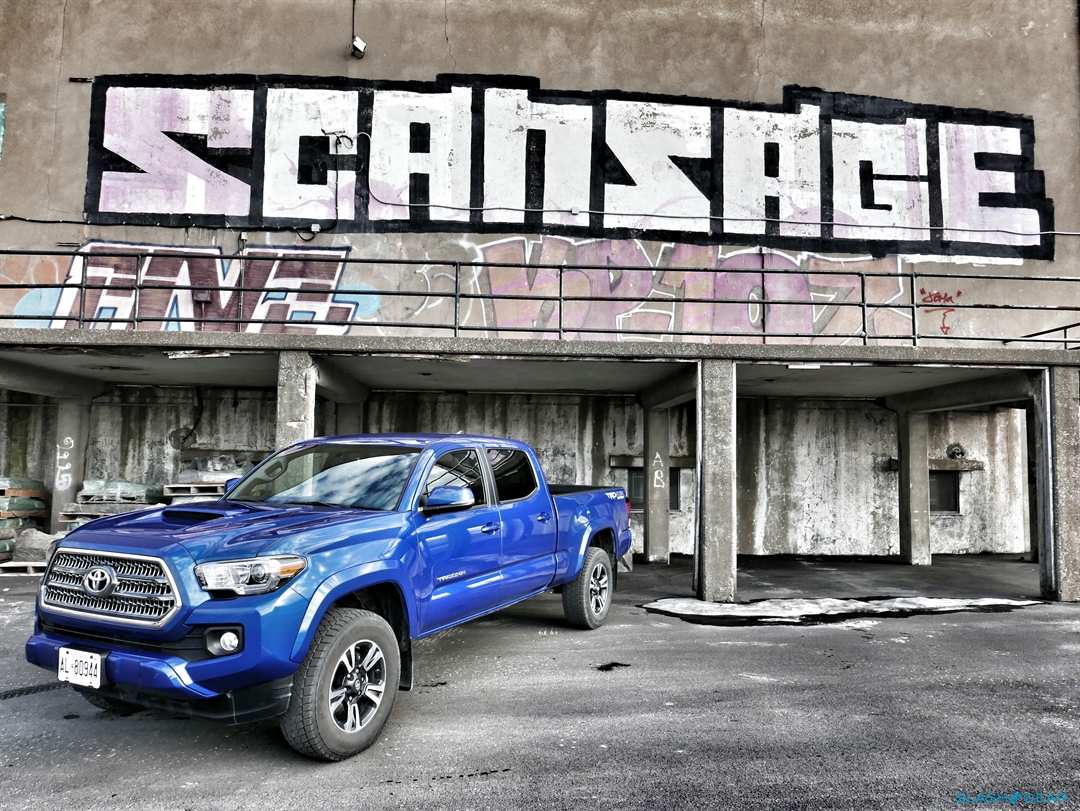 Ultimately, it comes down to what you are looking for in a truck. The 2016 Toyota Tacoma delivers more of the same all-around competence that has made it a runaway success for the Japanese brand, and indeed, the only mid-sizer of significance when it comes to sales since the year 2000. Exceptional resale value, great reliability, and a solid reputation for off-road prowess round out the Tacoma’s highlights. 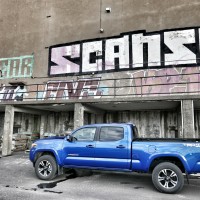 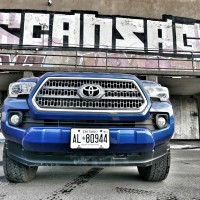 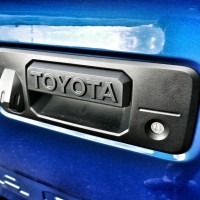 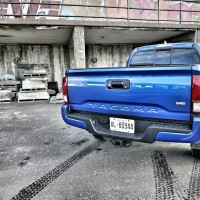 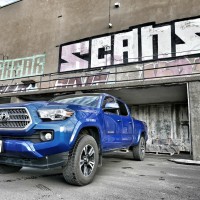 Still, I can’t help but think there’s something of a missed opportunity here for Toyota to get in on some of the luxury truck hype that has overtaken the full-size crowd. Tacoma pricing demands that you pay a premium over the Nissan Frontier as well as the Colorado and Canyon, yet doesn’t offer much in the way of innovation or features to back it up, especially at the entry level – and it can’t match the GM twins when it comes to ride comfort, active safety, or infotainment. The ground has moved beneath the Tacoma’s feet, and Toyota’s response has been to stand fast and give us a truck that should keep existing owners in the fold, but likely won’t do much to tempt new shoppers.