In May, Honda revealed plans to launch an updated CRF1000L Africa Twin motorcycle built upon the foundation laid by the original model. This week it made good on its promise, unveiling a better look at the upcoming motorcycle alongside additional technical details. Honda plans to show off the new Africa Twin later on this year sometime in Europe. Per Honda’s original announcement, the bike will be launching in Europe first this autumn. “Several versions” of the model will be available, as well as four color options. Price will start at €12,100.

Honda released additional details and images of the motorcycle on Friday, saying its adventure-bound bike is designed for use both on and off the road. The new Africa Twin’s “spirit” hails from the XRV750 Africa Twin model, bringing 1000cc goodness alongside a max torque of 98Nm and 70kW power output. 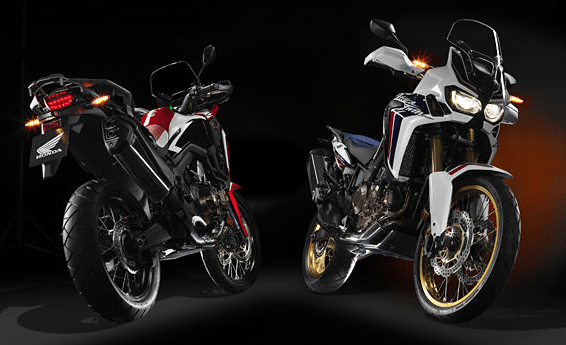 Honda worked to strike a balance between stability at high speeds, including when the bike is loaded up, and off-road performance. It uses a low center of gravity as a result, with the battery being positioned behind the rear cylinder head. This is coupled with adjustable Showa inverted forks and dual radial-mount Nissan four-piston brake calipers, says Honda.

Other features include 21 and 18-inch front and rear spoked wheels, dual headlights, an adjustable seat height (870mm and 850mm), and a large 18.8 liter gas tank which allows the bike to travel up to 400 kilometers before having to fill up again. The maker has included its Honda Selectable Torque Control system, which brings three control levels, as well as an option to turn off ABS on the rear wheel (for those off-roading adventures).