The 2016 Ford Mustang Shelby GT350 wasn’t designed to kick ass at the drag strip, but that doesn’t mean I’m not sitting in the right-hand lane of the closest 1320 waiting for the staging lights to clear. You see, yesterday’s lightning storm wiped out the lapping sessions I was scheduled to attend that evening, which left me scrambling to find a track on which to sample Ford’s all-new apex pony car.

Why am I so eager to set the GT350 loose from the confines of the well-patrolled, heavily-trafficked roads that surround the island of Montreal? It’s simple, really: when Ford designed the latest iteration in its long line of high performance, Shelby-badged Mustangs (and the first to be released without the involvement of original creator, the late Carroll Shelby), it set out to build a track car for the street. Much more like the Boss 302 that preceded it, rather than the hyper-muscled Shelby GT500 that shares its name, the Shelby GT350 happens to benefit from the best platform to ever underpin the coupe as its starting point. 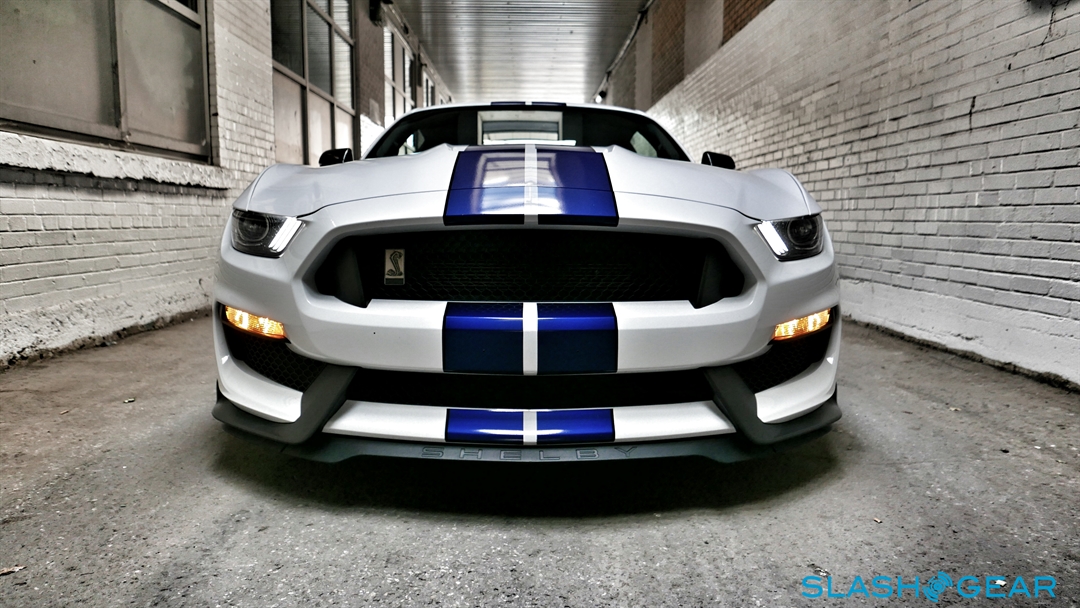 Of course, as with the Boss 302, the Ford Mustang Shelby GT350’s end result is about as far from the standard Mustang as you can get. The bones might be the same, but the similarities end there. Don’t think of the GT350 as the next evolution of the GT model’s brawny persona, but rather imagine it as a world-class sports car wrapped in Mustang sheet metal – and that’s an important distinction to make when trying to decide whether the Shelby GT350 might be for you. The coupe’s track credentials are impeccable, but they come at a price that will be exacted upon you each and every time you slip behind the wheel to commute to work in the morning. 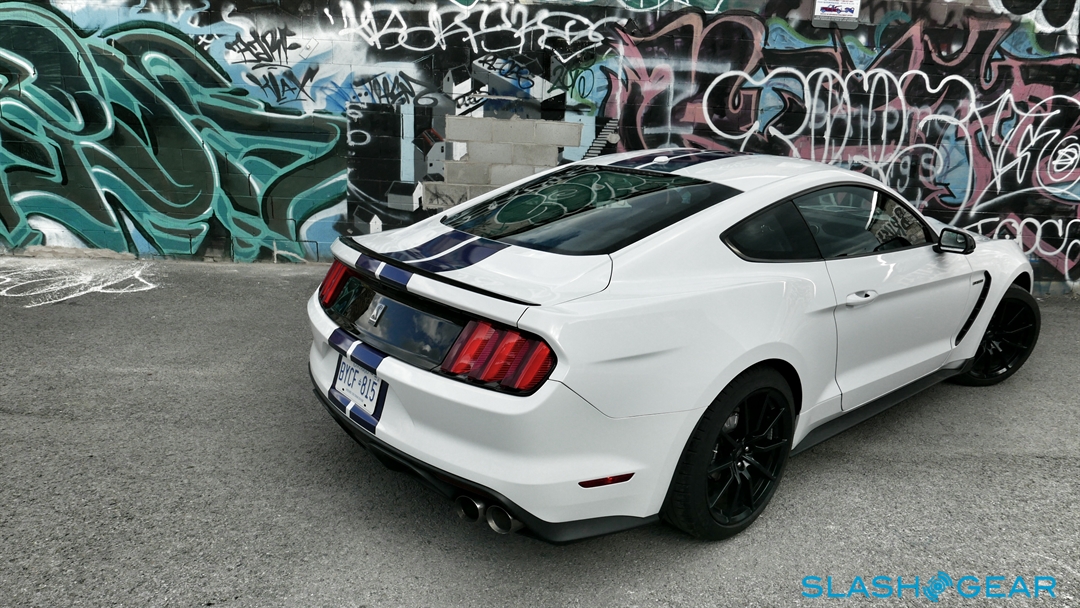 This is far from a criticism of the car’s outstanding package. You see, Ford really didn’t cut any corners when assembling the chassis for the Mustang Shelby GT350, fitting it with aluminum suspension components where possible and also giving it the option of magnetically-adaptive shock absorbers, which is a first for the ‘stang. The car’s enormous 19-inch Michelin Pilot Super Sport tires are aided and abetted by six-piston Brembo brakes up front, an independent rear suspension out back, and an extremely aggressive alignment that highlights turn-in and provides excellent communication through the steering wheel. 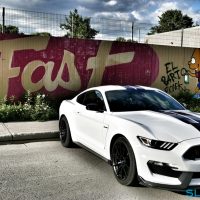 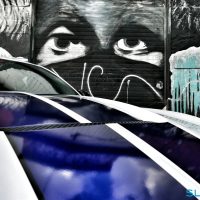 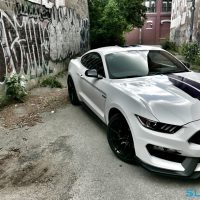 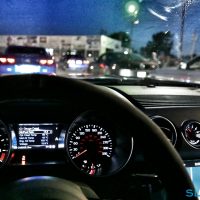 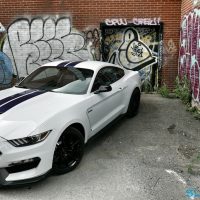 All of that sauce, so delicious on the track, overpowers much of the Mustang’s flavor in day-to-day driving. Around town, even with the shocks set to their most supple, the Shelby GT350 remains overly eager to tell you about each and every striation in the pavement below, while on the highway the vehicle’s propensity to tramline will keep your arms active as you attempt to plot a relatively straight course. 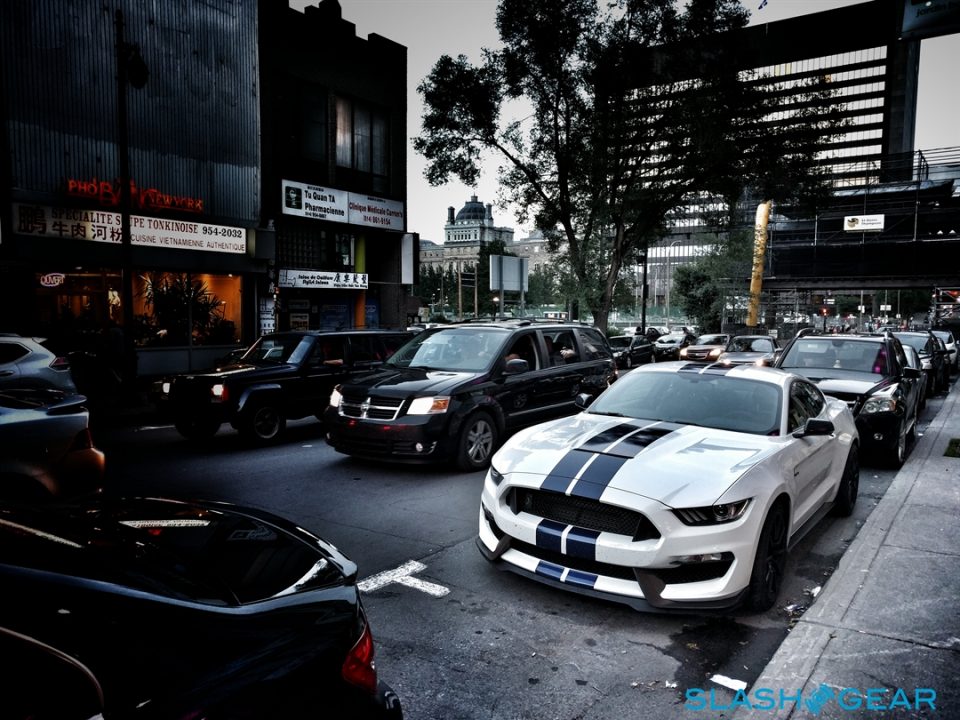 Will some buyers be turned off by the Ford Mustang Shelby GT350’s aggressive character? Most certainly – but it really doesn’t matter. This is a car that wasn’t built for the masses, nor even for the traditional Mustang GT buyer, but rather for individuals seeking an out-of-the-box lap-turner, and who understand the compromises in comfort that come with that mission statement. 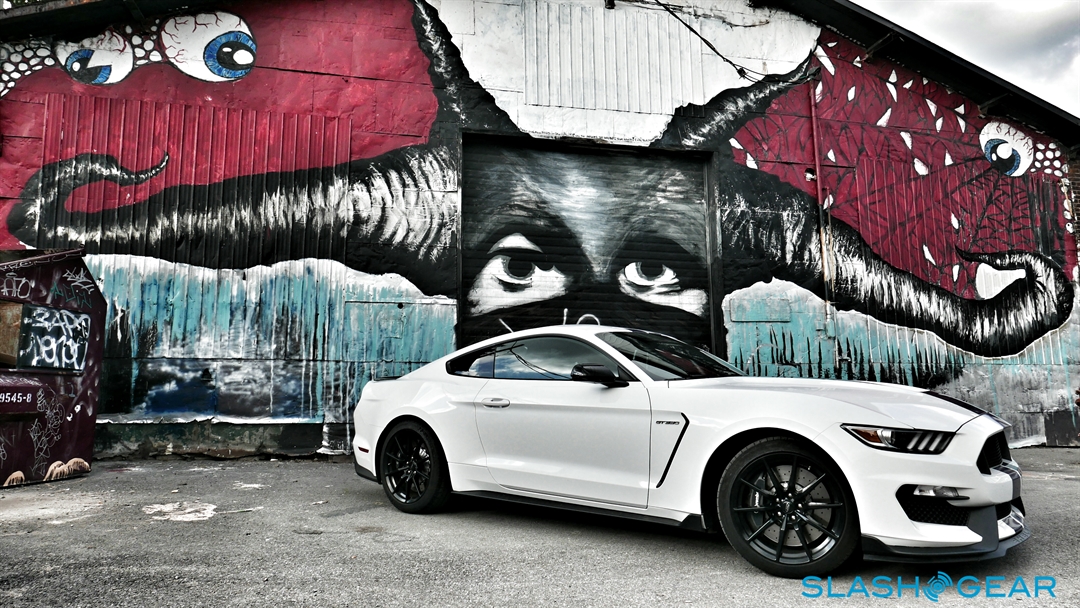 It’s also reasonably affordable. Pricing for the base 2016 Ford Mustang Shelby GT350 starts at just under $50,000, with the GT350R adding $13k to that figure (and bringing with its such exotic accoutrements as carbon fibre wheels and Sport Cup 2 rubber). If you want the mag-ride suspension, or any number of other electronic goodies inside the car it will cost you extra – unless you wait for a 2017 model, which makes the current year’s Track package (including mag ride) standard and boosts the price floor by about the same amount it would have required to add it a la carte. It’s also a bit easier to configure the car how you’d want it if you’re patient enough to forgo the initial production run, as options are more logically grouped for second-year cars, and you also get the benefit of avoiding the at-times onerous dealer markup that’s occasionally been reported for the 2016 Shelby GT350. 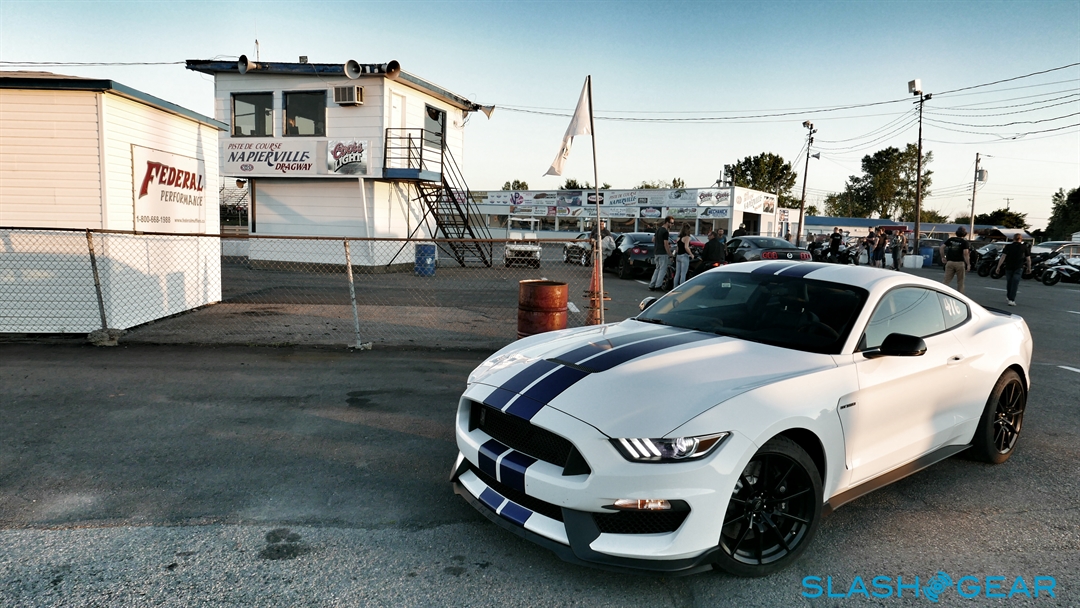 All of this brings me back here, to the Tuesday night drags. Lined up beside me is a solid-axle Mustang GT, with the kind of slick rubber mounted out back that lets me know in advance that I’m going to lose this particular straight-line battle. You see, I’ve brought a rapier to a wrestling match – the 5.2-liter ‘Voodoo’ V8 under the hood of the GT350 produces 526 horsepower and 429 lb-ft of torque, but you don’t get to tap into all that twist until just under 5,000 rpm. This is an engine designed to be wrung out to its 8,200 rpm redline on a road course (with peak horsepower happening at 7,500 rpm), its 180-degree opposed cylinders roaring in unique concert through the car’s gloriously loud sport exhaust system. 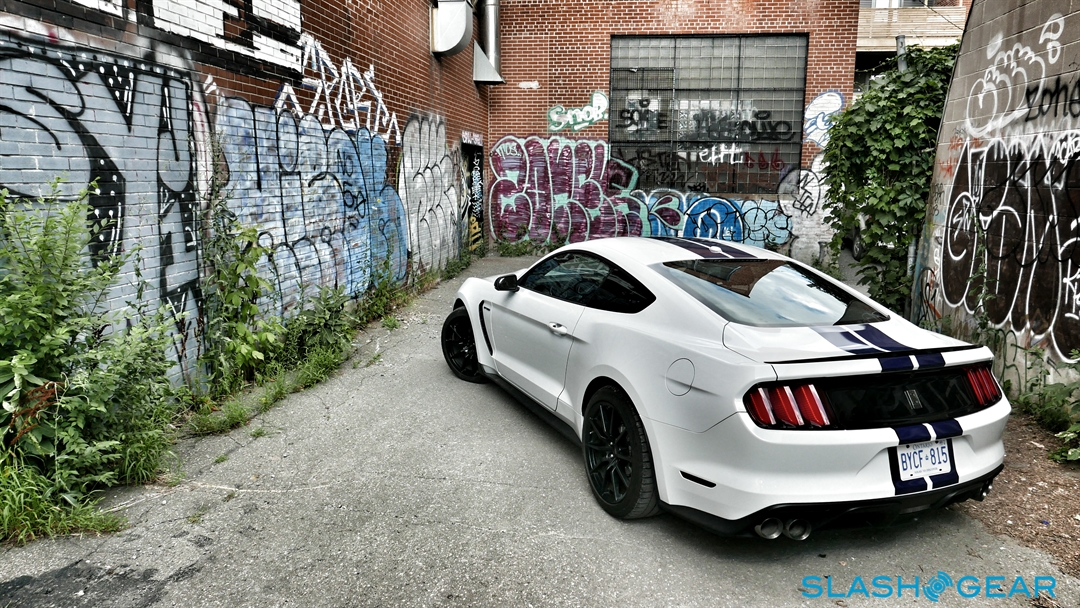 The tree counts down and the Mustang to my left explodes out of the gate. I, on the other hand, have learned from earlier grudge matches this evening that it’s best to forgo launch control and instead rollout ever so slightly from the starting line prior to stomping hard on the power. Acceleration is linear at first and then once past 3,500 revs it gathers steam with gusto, shooting me towards my first shift point, upon which I’m still astonished to discover that second gear immediately pegs 6,000 on the car’s tach. I guide the transmission into fourth by the end of the run, a 12.8 second pass @ 114-mph to the 12.5 second performance of my rival. 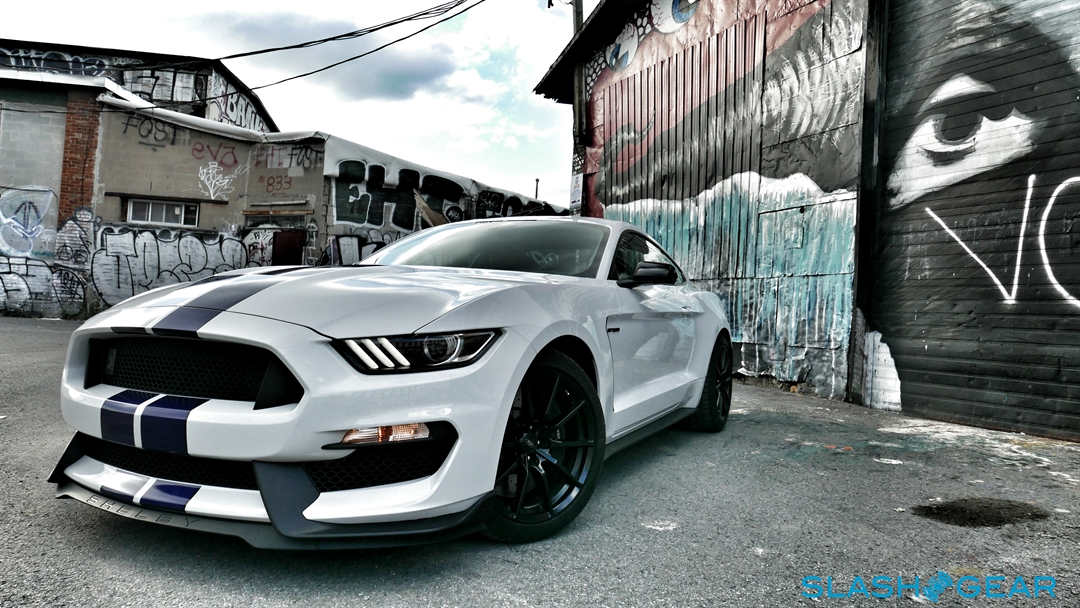 I’ll take it. I’m not here to take any trophies home, and neither is anyone else. Tonight is about enjoying one of the best-sounding, and most attractively-styled Mustangs ever built, in the company of a gearhead crowd that is equally appreciative. Compliments abound from everyone who approaches me about the car, singling out everything from its intimidating aero package to its sleek profile to its tenorous tailpipes. Lap after lap of G-crushing fury might be the Shelby GT350’s raison d’etre, but it’s almost as exciting in 12-to-13-second increments as well.