Time is a flat circle, especially in the automotive industry, where if you drive long enough you’re likely to meet yourself coming back around again. This was exactly how I felt when Cadillac debuted the ATS-V sedan just last year: here was a four-door sports sedan aimed at entry-level buyers who might have previously considered a BMW – specifically, one with an ‘M’ badge on the trunk. It was déjà vu all over again, because you see, I’ve had that same Cadillac formula sitting in my garage for close to a decade now. 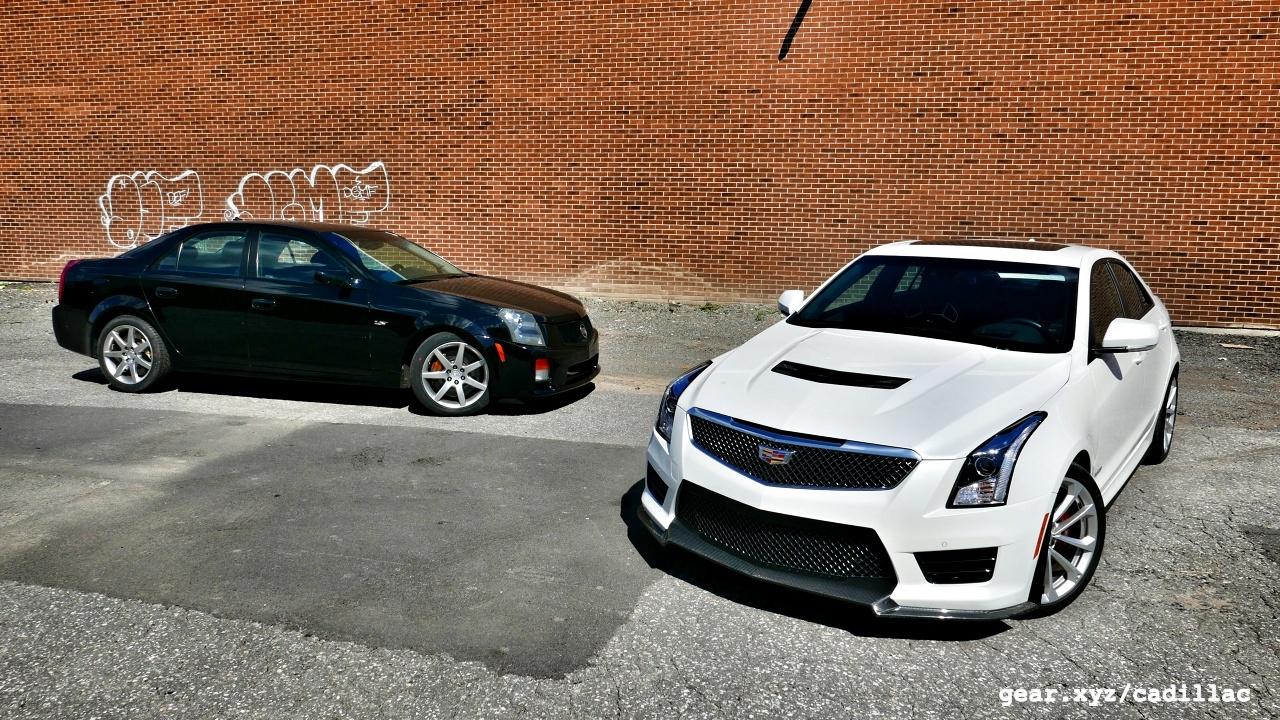 The ATS parallels are numerous: the first-generation CTS was a small (slotting in somewhere between the 3 Series and the 5 Series), rear-wheel drive sedan paired with an attractive price and a (gasp!) manual transmission. Things really got interesting the year after, however, when Cadillac made the CTS the first V-badged vehicle in its long history by dropping in a 5.7-liter LS6 V8 engine pulled from the Chevrolet Corvette Z06, making a six-speed manual gearbox mandatory, and selling it in your choice of either all-silver or blacked-out paint schemes.

The Cadillac CTS-V would eventually evolve into the world-beating super sedan that it is today, growing in both size and power until it had left a void at the lower end of the line-up for a fresh fire-breathing four-door hot rod. Enter the ATS-V, the spiritual successor to the original V car, and perhaps the most exciting automobile you can currently buy from Cadillac. I’ve had the chance to drive the Cadillac ATS-V on more than one occasion, and when the opportunity came to park one in my driveway beside my own first-year 2004 Cadillac CTS-V, it seemed only natural that a showdown between these two similarly-sized, high performance luxury cars should come to pass. 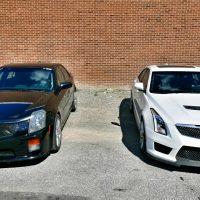 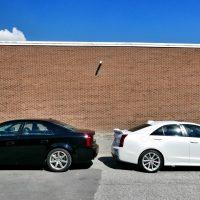 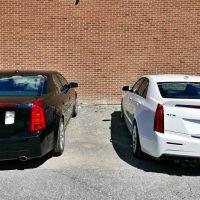 At first glance, both of these cars are in the same dimensional ballpark. The original CTS-V adds four inches of wheelbase over the ATS-V as part of its just over seven-inch total length advantage. Surprisingly, however, despite being about an inch and a half taller, the older car is actually narrower than the modern Cadillac, something that’s easy to miss given the gaping grille and air intakes built into the front fascia of each vehicle. 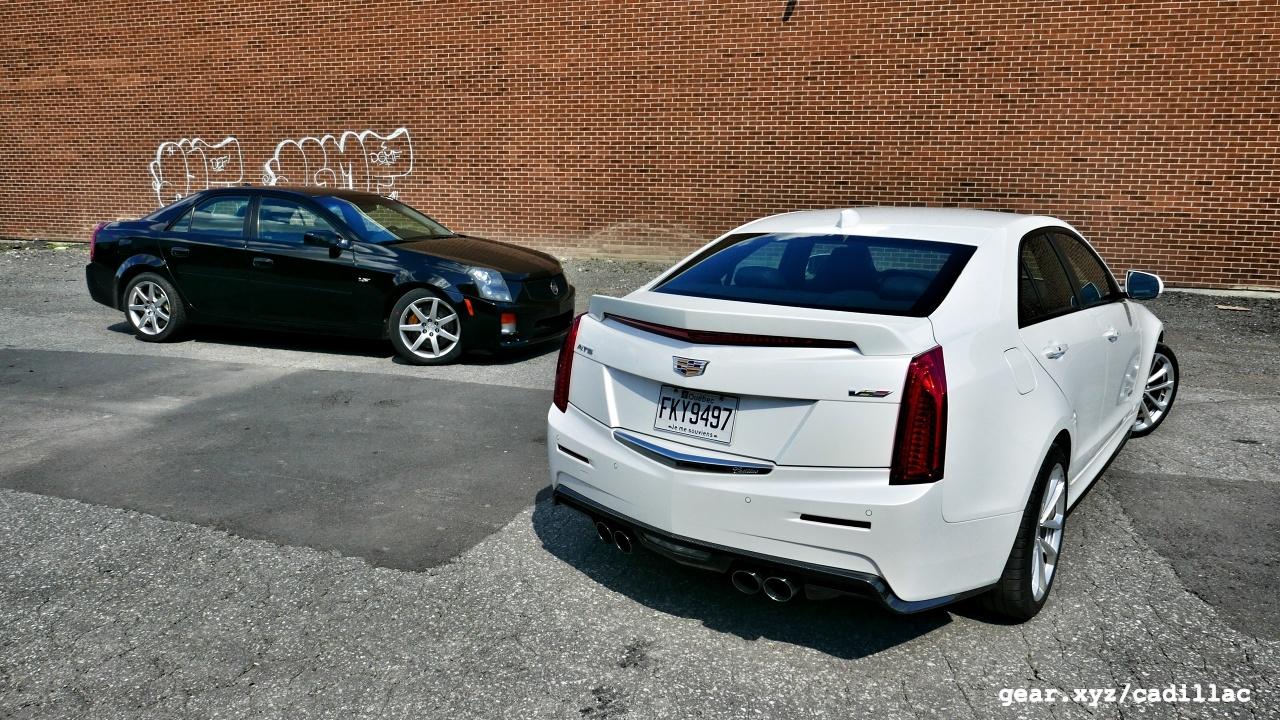 More evident is the switch from basic HID projector lights up front to LED-accented units, along with hood cutout for pulling heat out of the engine bay on the ATS-V and the carbon fiber splitter, wing, and rockers that are optional with the new sedan. Look closer and you’ll find a few other telltale signs of the march of progress, such as the six-piston calipers gripping 14.6-inch rotors up front on the 2016 Cadillac, versus the four-piston setup on the older car (despite a very similar 14-inche rotor diameter). My CTS-V’s calipers were once silver, but repeated heat from the track has burned them a mellow gold on three of the four corners, which the car wears like a battered merit badge. 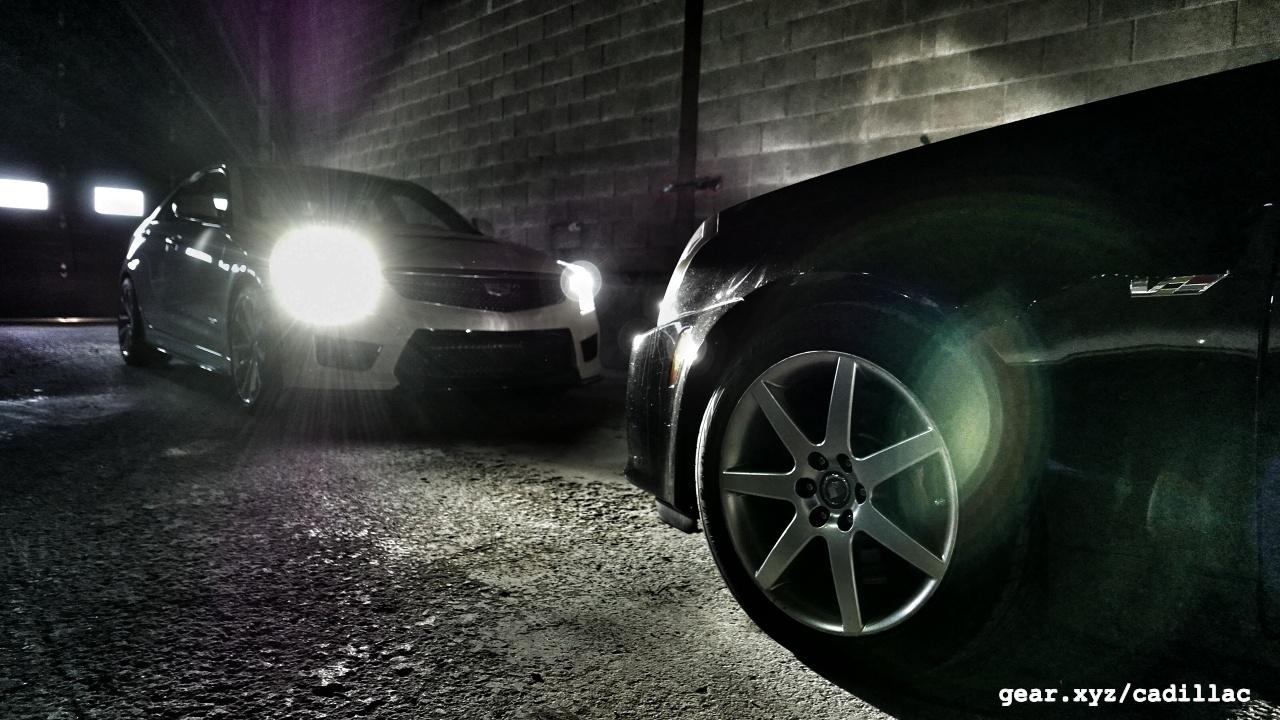 I’m not going to delve into the equipment specifics separating one luxury car from another more than a decade its junior, as it’s clear that the feature count, safety quotient, and cabin appointments of the ATS-V are on another level. Instead, it’s time to drive. 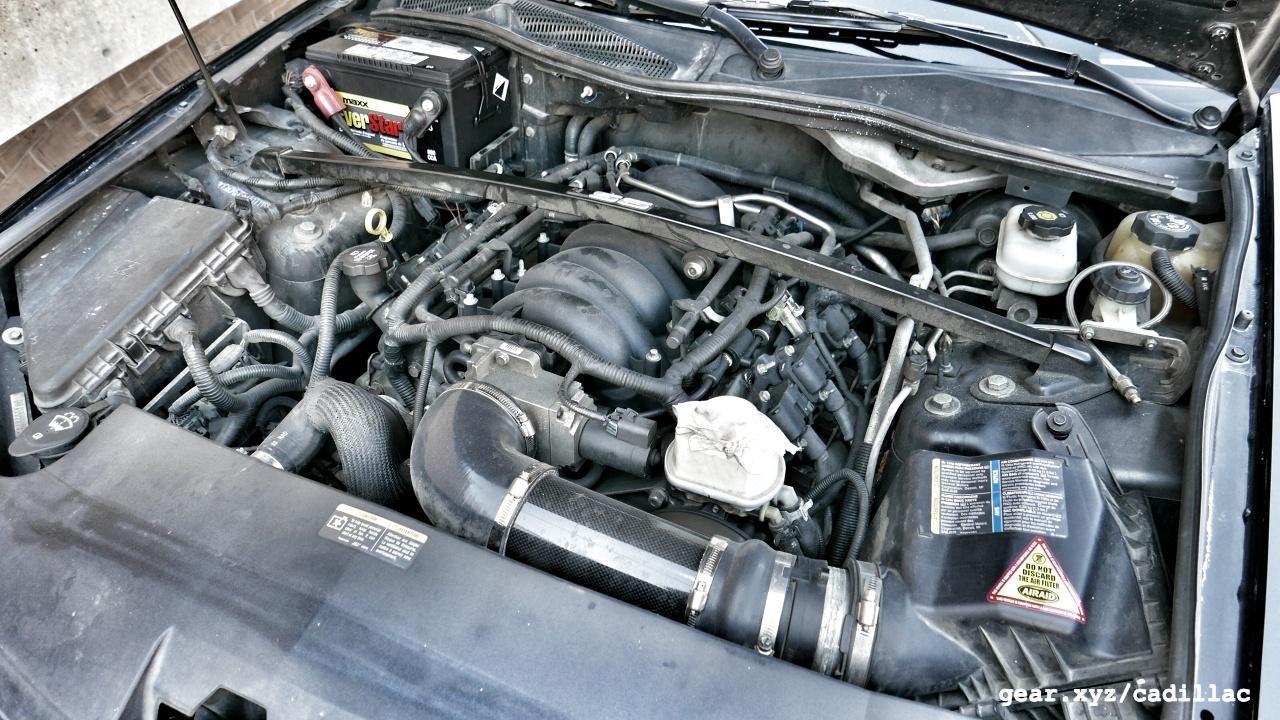 Turn the key on the 2004 Cadillac CTS-V and you’re greeted with a 400 horsepower V8 rumble that comes with its own owner’s manual warning (‘aggressive camshaft – shaking is normal’). Compound that with the poly engine and transmission mounts I installed after the original liquid-filled stock units split at the seams, and there’s no ignoring the lumpy idle of the original V car. The LS6 would last two years in the Cadillac before being replaced by the LS2, which brought a flatter power curve and a lower redline. I’m glad mine’s an ’04. 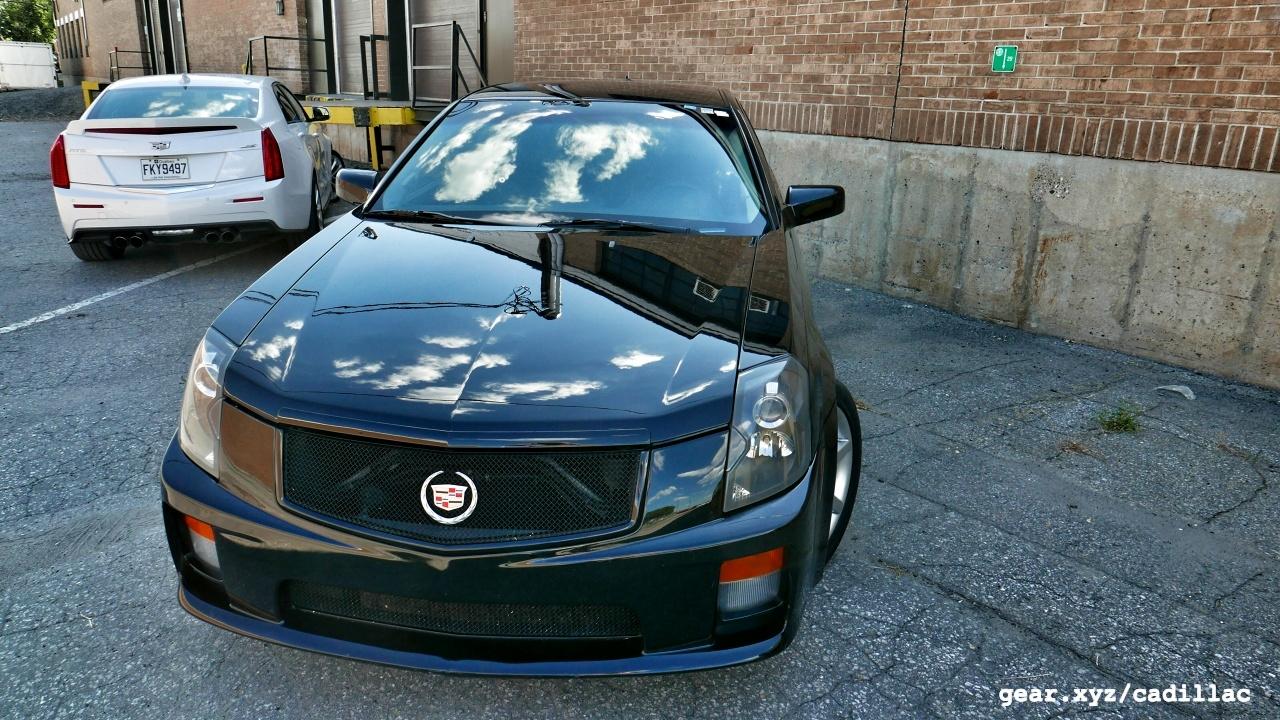 Like the motor mounts, the original shifter linking your right arm to the Tremec T56 six-speed manual gearbox was a vague, mushy disaster, a victim of Cadillac’s attempt to civilize at least a few aspects of the CTS-V’s drivetrain for fear of upsetting a customer base it was about to leave behind in fine hail of aerosolized rubber. I have a short shift kit developed by another V owner installed in mine, along with a remote clutch bleeder to take care of some of the balkier aspects of the Tremec’s behavior when driven hard (such as refusing to engage first gear). A pair of Hotchkiss swaybars and an LS7 clutch replacing the clunky, dual-mass Cadillac unit are the only other modifications made to my car. 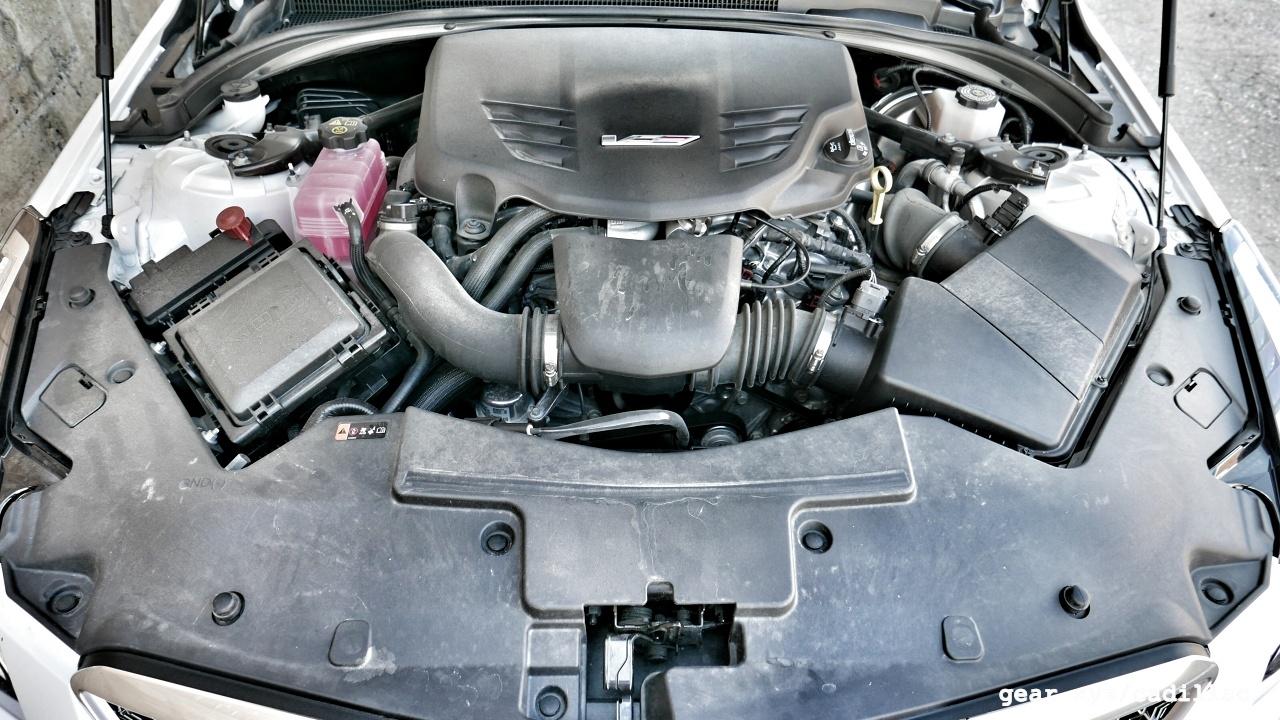 The 2016 Cadillac ATS-V is far less demonstrative upon making its first impression. A start button fires up a nearly-silent twin-turbo V6 that is good for 464 and 445 lb-ft of torque – numbers that are up (64 and 45, respectively), versus its ancestor. Still, you’d be hard pressed to peg the new sedan as the mightier of the two from idle alone. And then there’s the shifter. The ATS-V I snagged for a week featured the optional eight-speed automatic gearbox, a unit that’s exceptionally quick in a straight line but not nearly as engaging to drive as the standard six-speed manual. 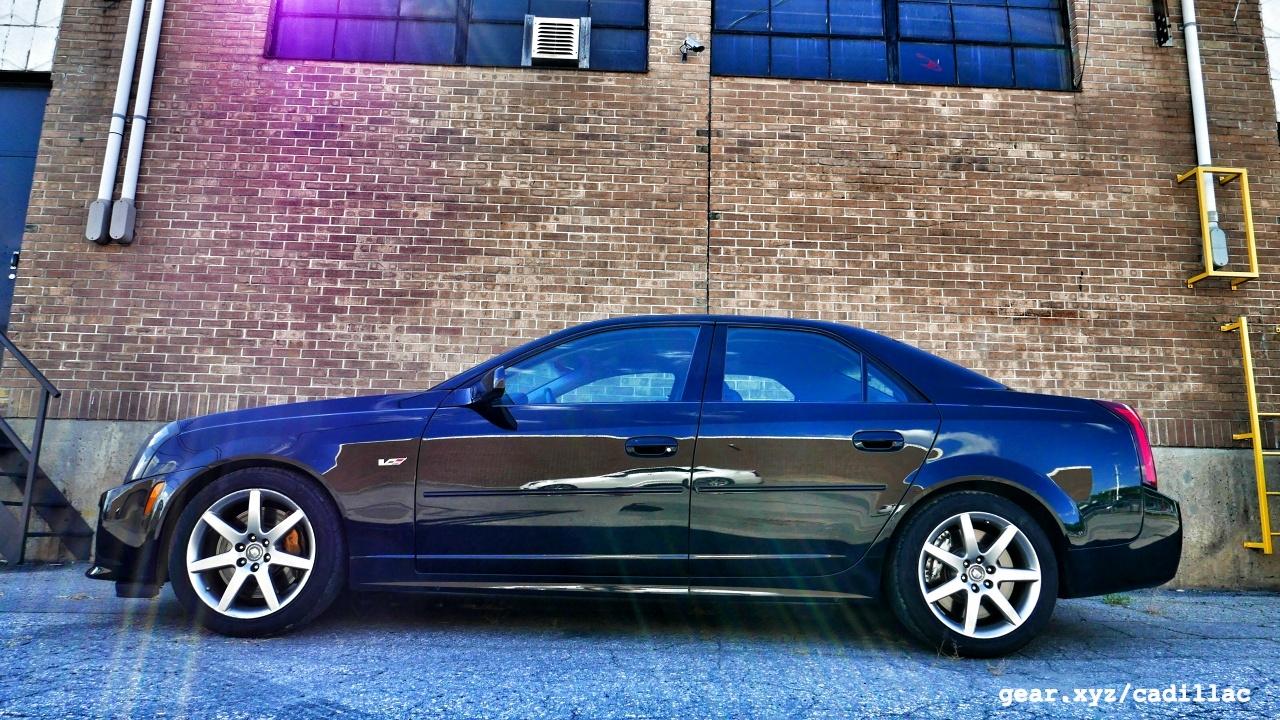 The rawness of the CTS-V’s character carries over from its drivetrain to its chassis tuning – but only in terms of immediacy, not brutality. This was the first Cadillac to introduce the concept of ‘Competitive Driving Mode,’ a sort of hands-off electronic traction and stability control system complementing its locking rear differential and intended to intervene only at the last minute. On the street it’s invisible, while on the track you really have to get the car out of shape to attract its steely-eyed gaze, which usually manifests in the form of ABS braking on one wheel or another. Turn it off, and you’re left to deal with the lively suspension and communicative hydraulic steering assist all on your own, which combined with the aggressive caster and camber settings I’ve dialed into the car translates into ‘you better be paying attention, dude.’ It’s not a dangerous drive, by any means, but you must pay attention because the CTS-V isn’t going to hold your hand should you fudge any steering or throttle inputs. 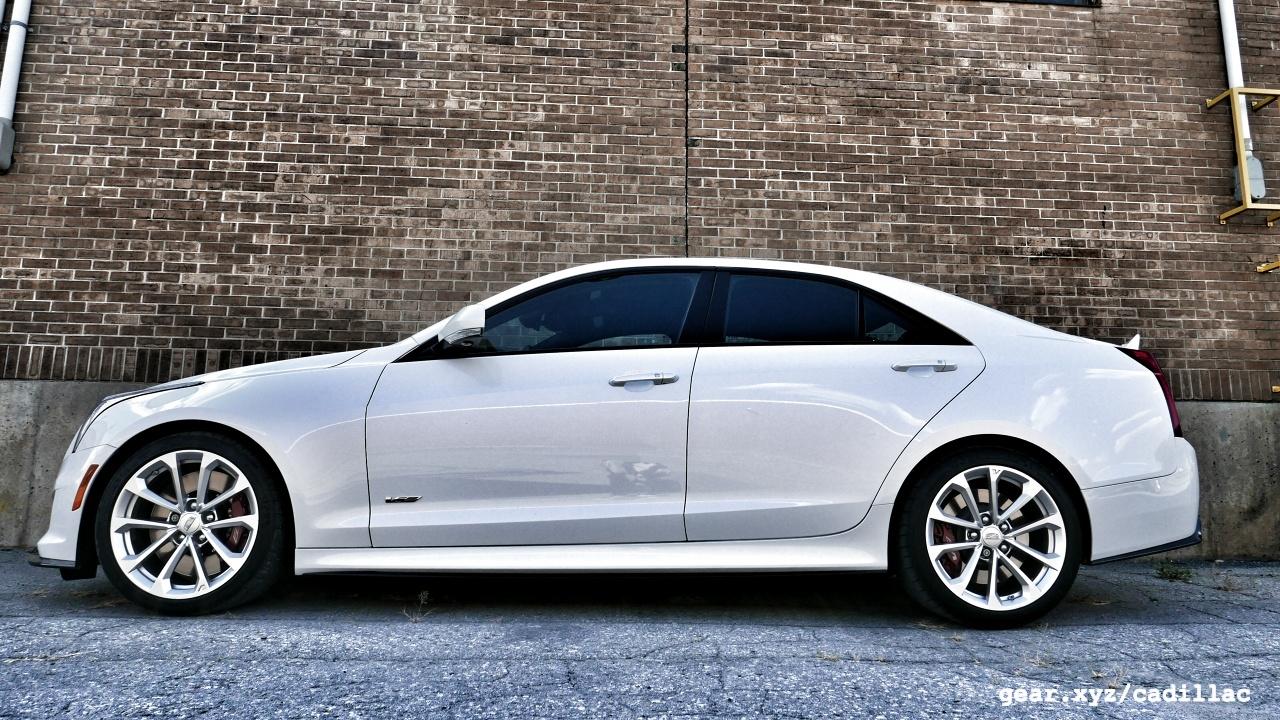 The ATS-V, however, is a model of high performance poise. Its trump card? GM’s fantastic magnetic ride control suspension, which automatically adapts to driving conditions faster than your brain can transmit a nerve impulse from your forward lobe all the way to the tips of your fingers. Add to that nearly 10 different levels of stability control (thanks to the Performance Traction Management’s ‘Race’ setting), and you have a car that’s perfectly willing to plaster a smile on your face around a road course with a bare minimum of drama. 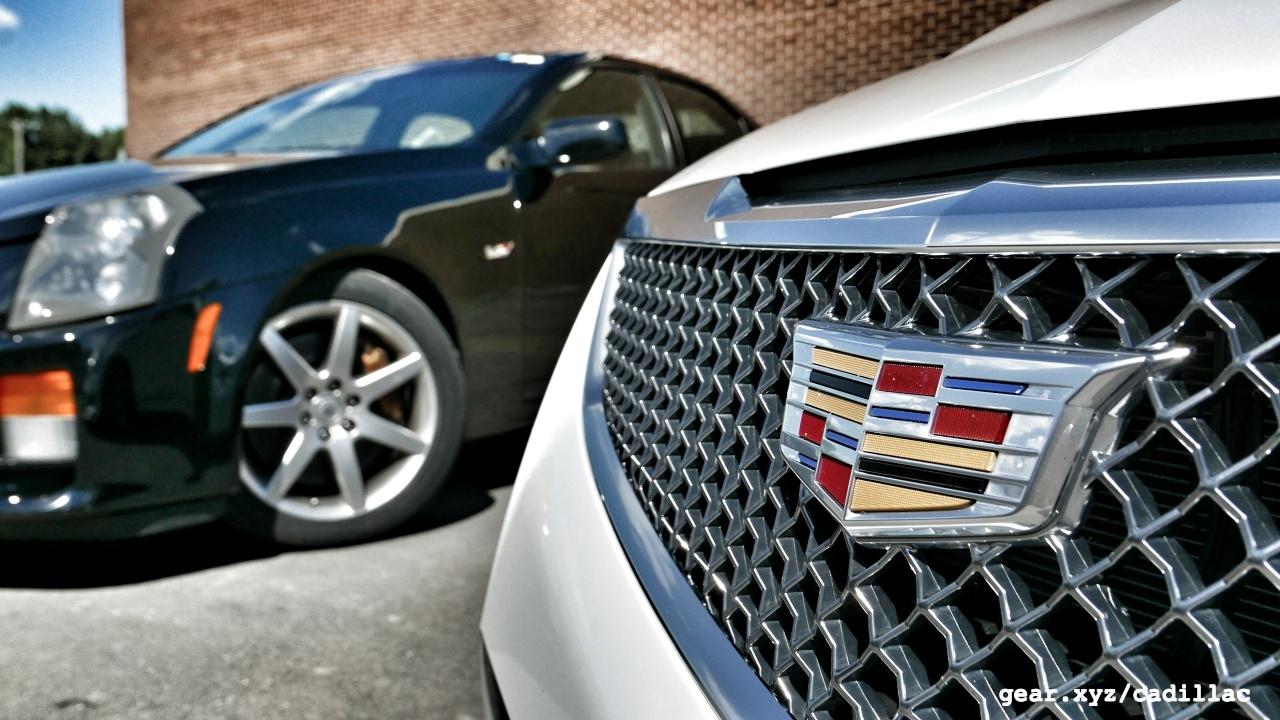 In a straight line it’s a similar story. My CTS-V is impossible to launch hard, what with four separate under-warranty rear differential designs offered by Cadillac until one was found that would at least feign resistance to explosion-via-wheel-hop when hammered at the drag strip. The Cadillac ATS-V, on the other hand, leverages a full launch control system to dazzle with a sprint to 60-mph in the low four-second range, more than half a second quicker than its grandfather if you’re willing to risk grenading the older car’s diff. From a roll, however, the cars are more evenly matched. Despite a 300 lb weight disadvantage and the much faster shifting inherent in the ATS-V’s automatic transmission design, the CTS-V stays on the whippersnapper’s rear quarter panel thanks to the deep breathing of the LS6 engine. 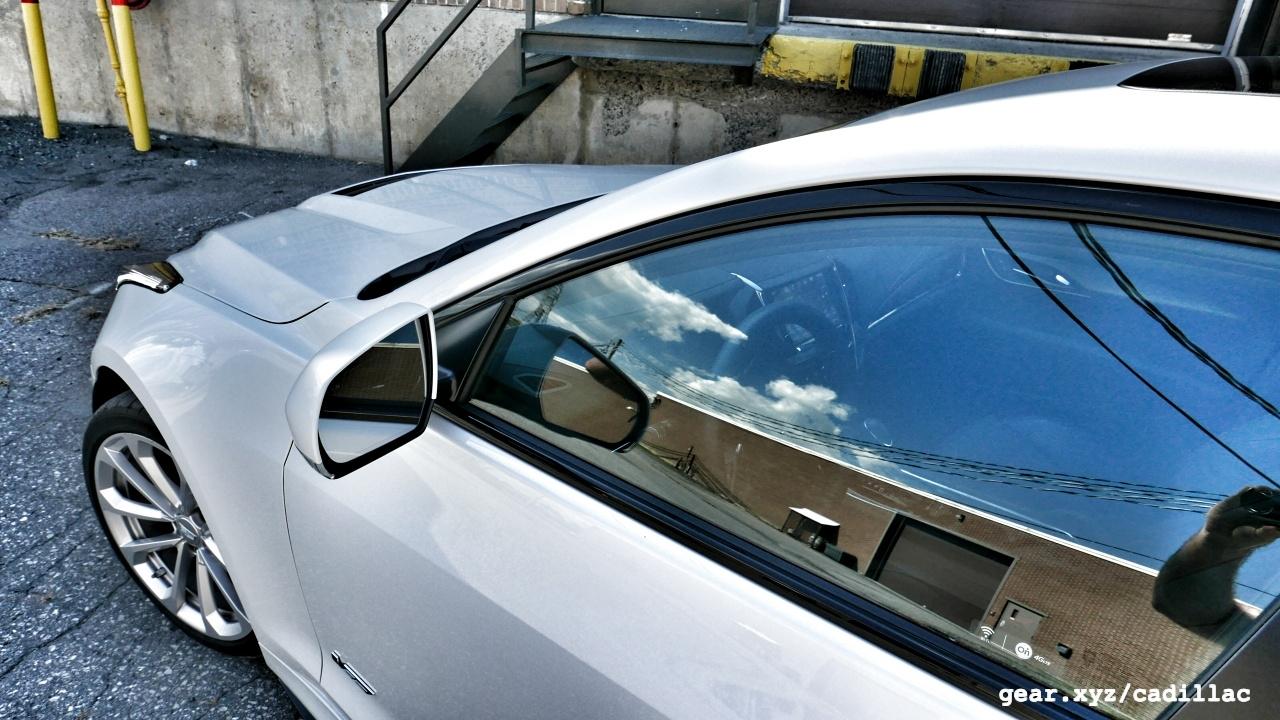 Were this scenario to be played out on a long enough stretch of road, the newer Cadillac’s 189-mph top speed would leave the CTS-V’s 163-mph terminal velocity in the dust, but the chance that these two cars will ever encounter each other on a stretch of unrestricted autobahn are remote, to say the least: Cadillac built fewer than 9,000 examples of the original CTS-V, and most were destined for the U.S. That being said, the car’s German is more than passable, as the brand’s engineers tuned the car on the Nürburgring Nordschleife, posting a time of 8 minutes, 19 seconds. Official numbers for the ATS-V aren’t available (although the car has indeed been on its own Teutonic holiday), but after driving the sedan at Circuit of the Americas I’m confident that a sub-eight minute lap is in the cards. 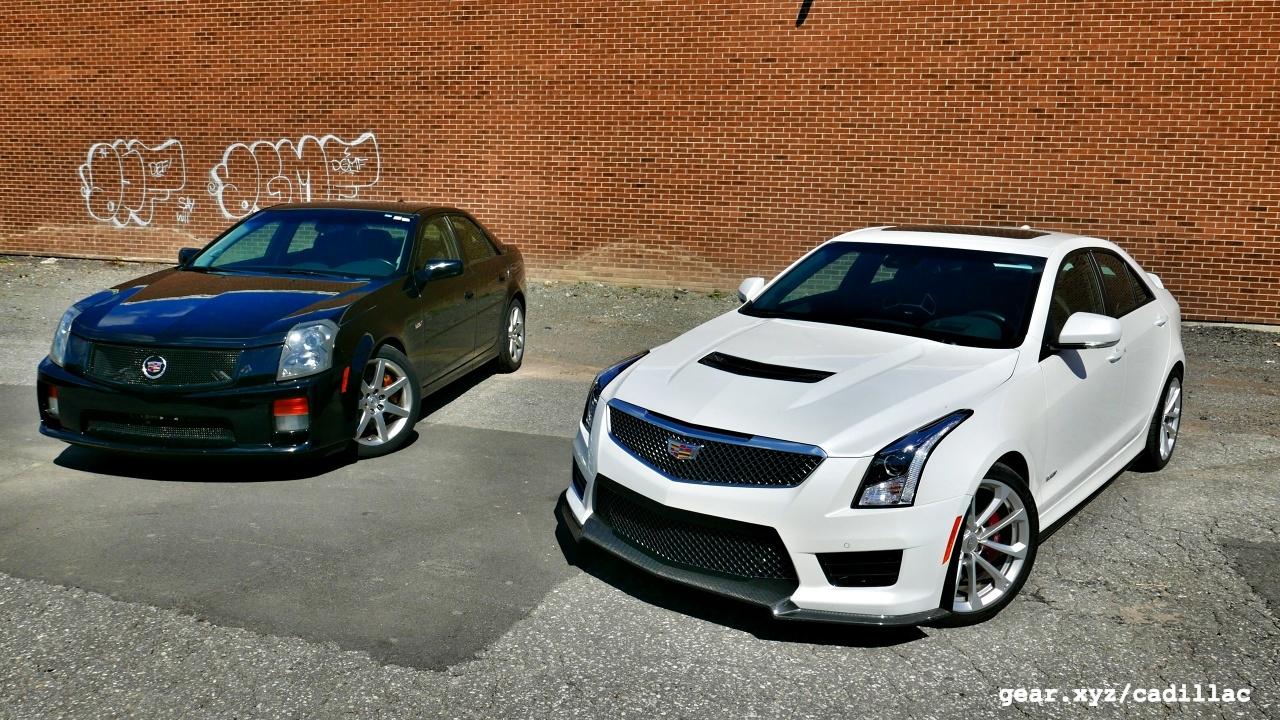 I’m glad I bought my Cadillac CTS-V when I did. At the time, it looked as though rambunctious, V8 sedans outfitted with a manual transmission and a feel-every-pebble chassis were an endangered species. Unfortunately for enthusiasts everywhere, this prediction has largely come true, with turbocharged motors and electric power steering delivering incredible performance at the expensive of making a real connection with the car. There’s also the soundtrack to consider: no matter how artificially sweetened things might get, audio engineers the world over have yet to synthesize an exhaust note as seductive as that of an eight-cylinder car in full flight. 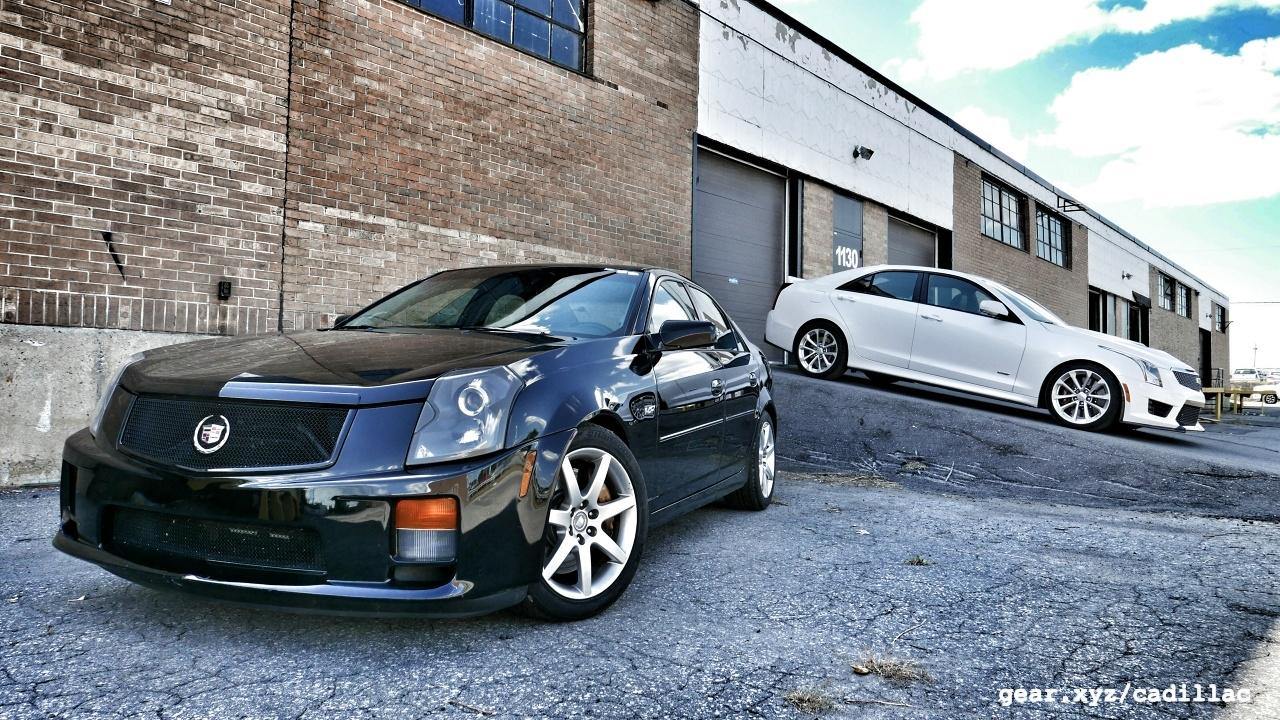 That being said, the Cadillac ATS-V is far from being some sort of four-door consolation prize for anyone who missed the boat on decade-old American muscle. The ATS-V is infinitely more refined than the V model that kicked everything off for Cadillac, and also happens to be faster by every meaningful measure. Above all, it’s fantastic to drive every day, thanks to the smoothness afforded by its magnetic suspension and the boatload of luxury features stuffed into its comfortable cabin. 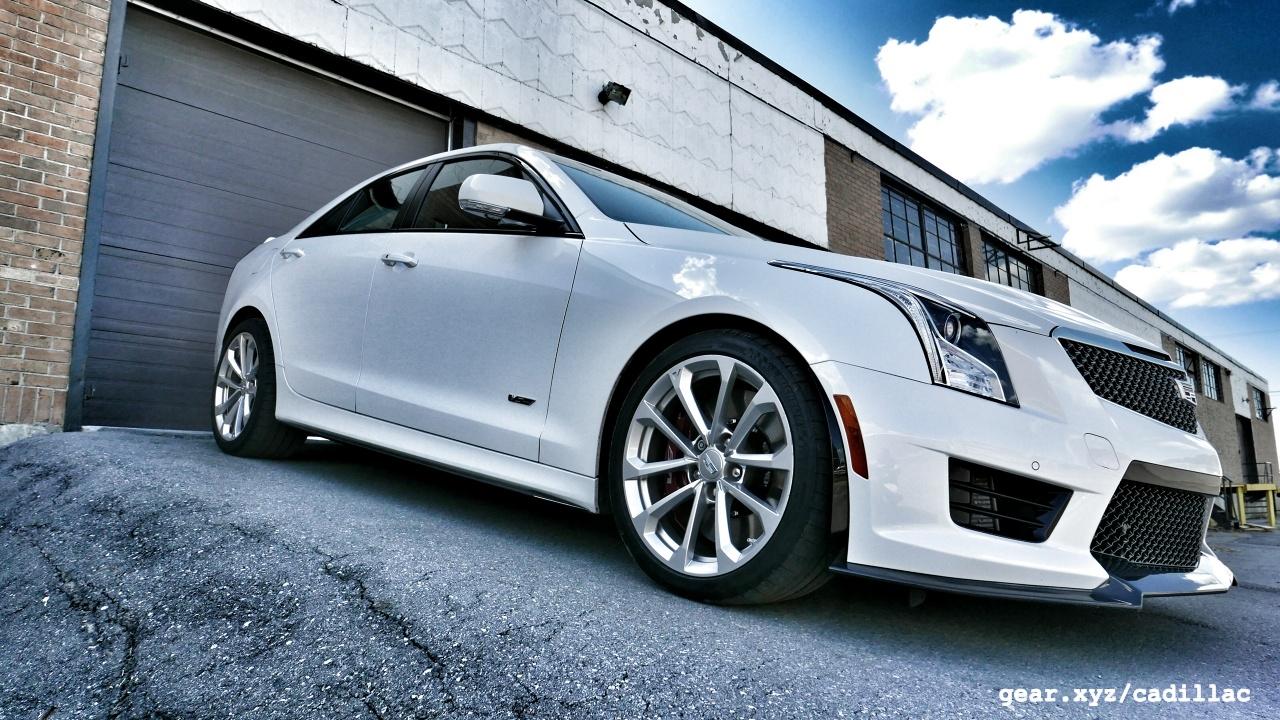 Two very different answers to the same question, from an automotive giant that’s older, wiser, and more sure of itself than it was back in 2004 when the idea of a Cadillac owner smoking tires instead of a pipe was still viewed as somewhat ridiculous in sport sedan circles. A pair of badass four-door cars that each laugh at the conceit that one has to cross an ocean to source a daily driver that will beat up on whatever road might be encountered when taking the long way home. And fortunately for me, only one set of keys that I have to return at the end of the week.