The 2016 BMW i3 is the DeLorean of our times. No, I’m not talking about gullwing doors (that’s the exclusive province of its bigger brother, the i8), nor am I referring to sketchy Renault mechanicals (you’ll still have to travel to France for that pleasure). What I mean is, the BMW i3’s future-tense design and real-world electric car performance qualify it as a time machine of the first caliber, a glimpse into tomorrow along the lines of what we were once promised in the breathless prose and scintillating images published in the pages of Popular Science magazine.

Doc Brown would be proud – but more to the point, so would Marty McFly, because here, finally, is a dedicated compact EV that dares to wear its stylish 21st-century design on its elegantly-sculpted steel-and-glass sleeve. In other words, it’s a car worth leaving your hoverboard at home for. 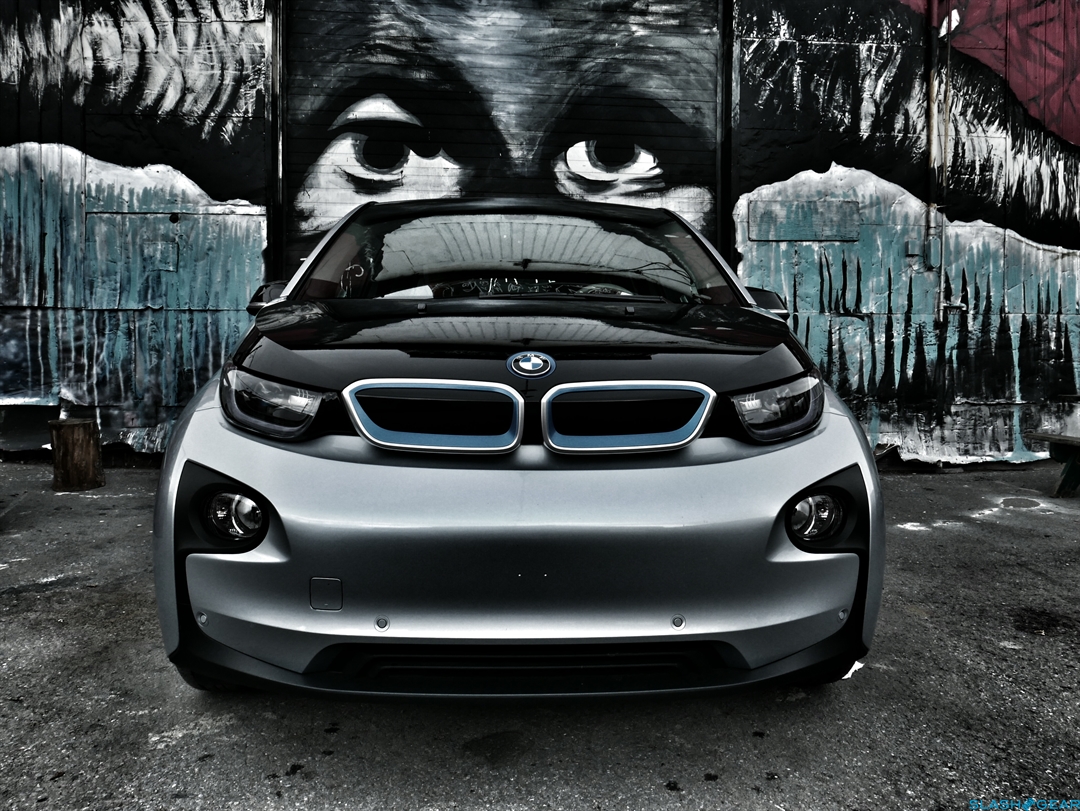 That BMW’s i division is far and away the most risk-tolerant arm of the German automaker’s luxury empire is clear after spending any time inside or alongside the 2016 BMW i3. Rarely does such a small car make such a big impression on everyone within a 50-foot radius, as the bubble-topped subcompact’s curvy snout, upright stance, blacked-out hatch door, and blocky side panels give it a profile unlike anything else in the brand’s line-up. 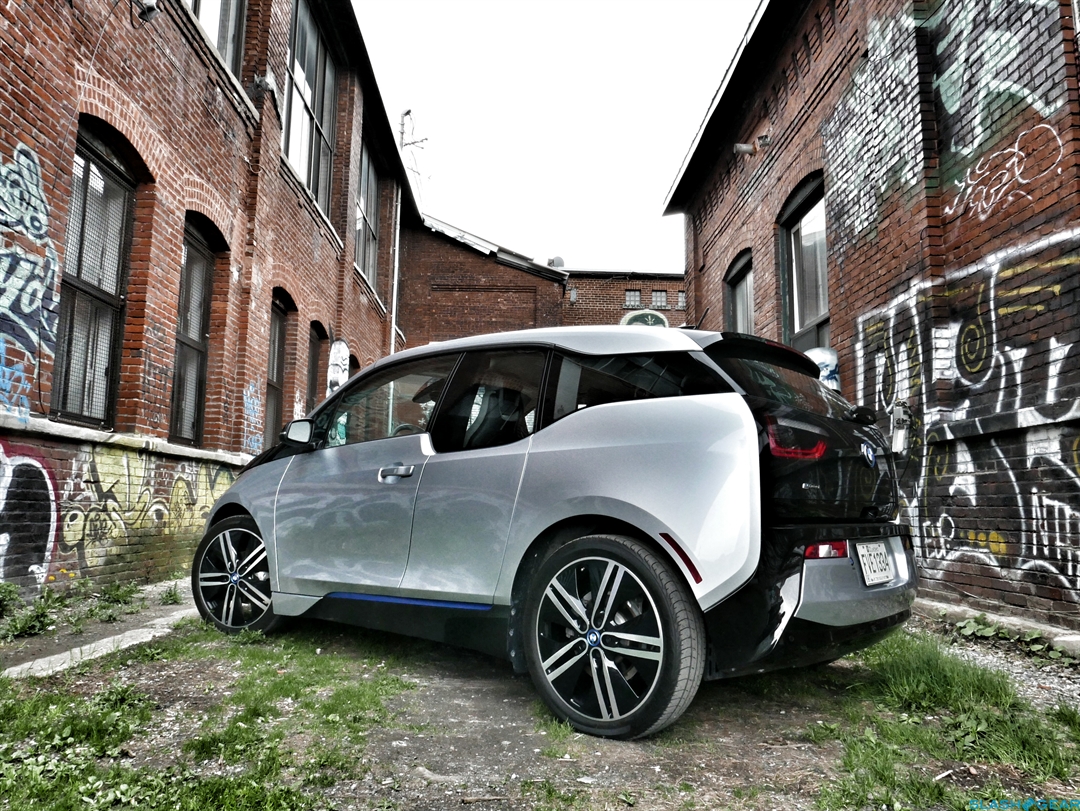 This arresting collection of styling cues continues within the i3’s cabin, which is surprisingly open and airy for a small automobile – a testament to its tall roofline and the decision to use light-colored woods and accentuate the gaps between screens, panels, and dashboard throughout the vehicle. Although the materials used throughout the interior of the BMW i3 walk the line between recycled-chic and upscale niche, it’s their presentation that seals the deal and makes driver and passengers feel as though their are riding along inside something special. 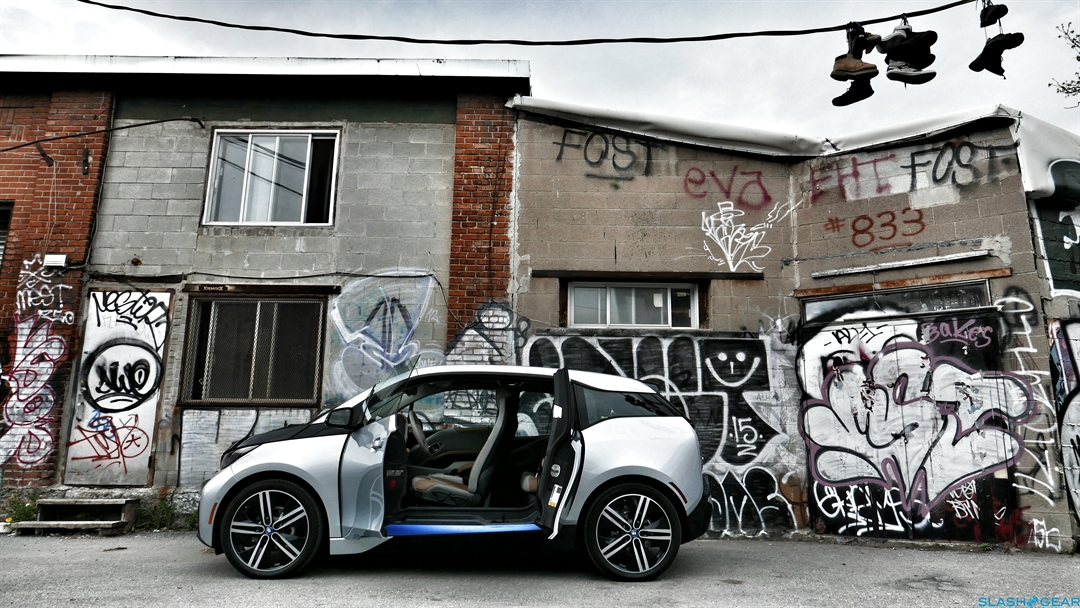 It’s also worth noting that the concept of carting around more than just a pair of people in the BMW i3 isn’t an unrealistic one. Not only does the rear seat offer legitimate comfort for actual adults, but getting back there is made easier by the presence of a pair of rear-hinged half-doors that carve a useful hole into the side of the hatchback when in used. You’ll have to crack open the front doors to release the rear set from their shackles – a minor annoyance, especially in crowded parking lots – but it’s a small price to pay for not having to clamber over a seat when seeking the back bench. Cargo room is also surprisingly generous for a subcompact EV, with just under 37 total cubes available in an easy-to-fill format. 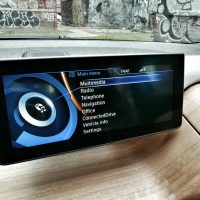 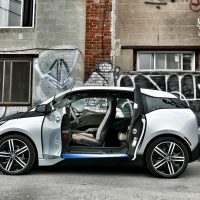 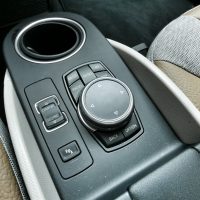 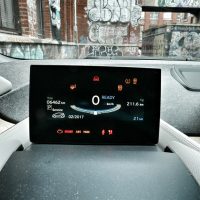 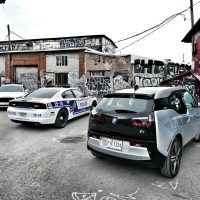 Back-from-the-future design aside, what really sets the BMW i3 apart from even its similarly-sized EV brethren is the decision to outfit the model with a rear-wheel drive layout. Every other battery-powered hatchback rival – the Volkswagen e-Golf, the Ford Focus Electric, the Nissan Leaf, and compliance cars like the Fiat 500 EV and the Chevrolet Spark EV – are front-pullers, which gives the i3 somewhat of an edge when it comes to handling and overall vehicle dynamics. 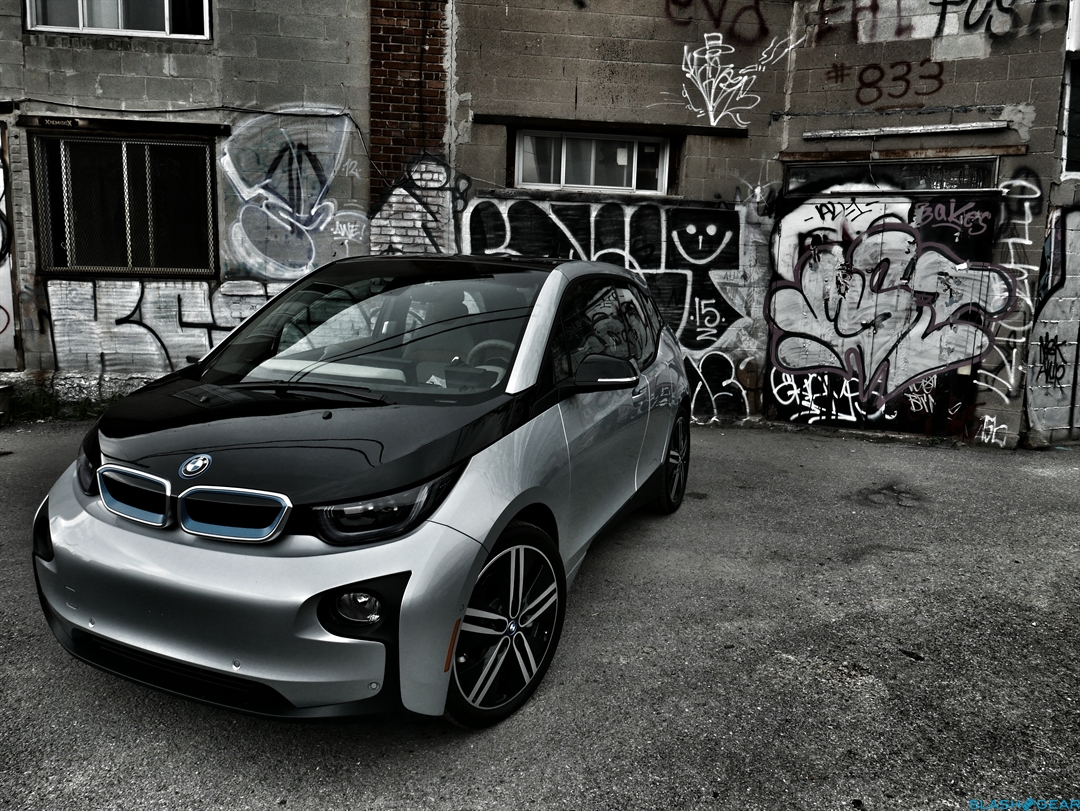 Sure, its ultra-thin, efficiency-focused tires don’t do it any favors in a slalom, and its tall center of gravity also works against it lighting a road course on fire, but that’s really beside the point when it comes to evaluating an entry-level electric vehicle. Around town the BMW i3 is adept at slicing through traffic, and while one occasionally feels the effects of its pizza-cutter tires over rough road surfaces, on the whole it offers a very composed ride. Where the EV’s narrow rubber and domed profile come into greater play is out on the highway, where gusts of wind can easily overcome the car’s grip and nudge it ever so gently over the white or yellow lines.

The electro-kinetic heart of the 2016 BMW i3 is a 125-kW electric motor, which is paired with a 22-kWh battery. This translates into 170 horsepower and 184 lb-ft of torque – numbers that are not all that far off from the E30-generation BMW 325is, which has since been canonized for its fun-to-drive character. The i3 carries over the 325is’ penchant for acceleration, tapping into its instant-on electric torque to sprint to 60-mph in less than seven seconds. 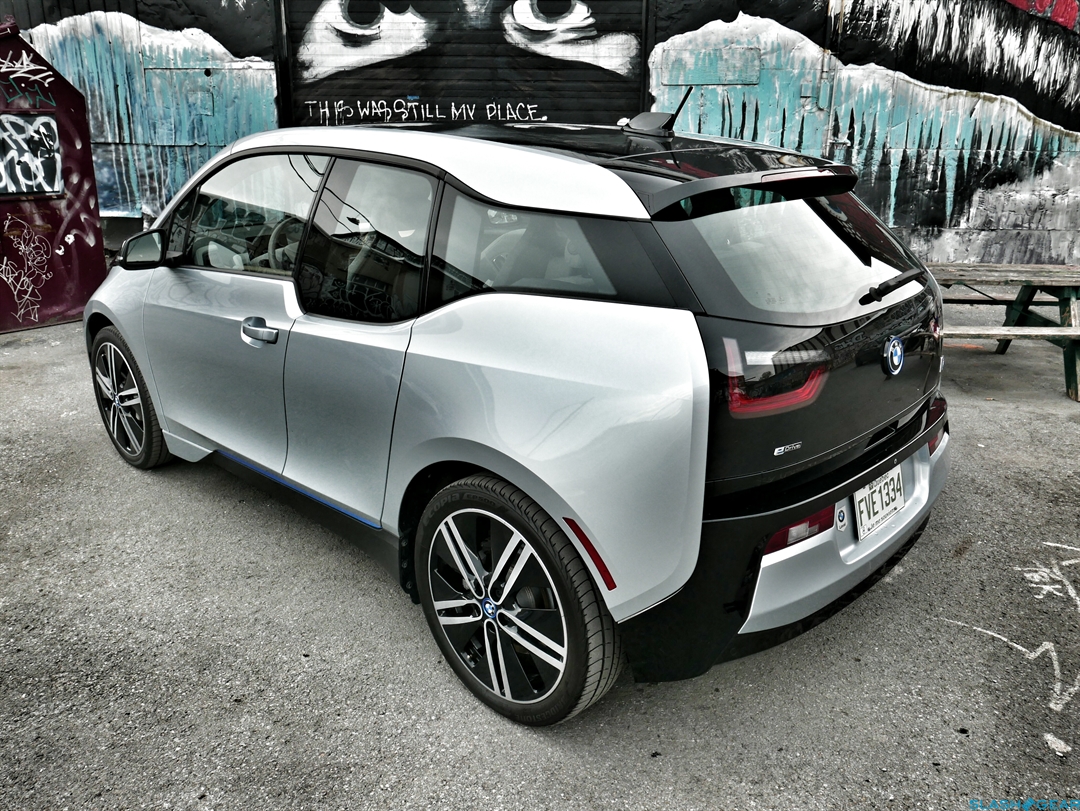 The vehicle also features a very aggressive regenerative braking system, which engages as soon as you lift your right foot. You can even rely on the regen feature to bring the car to a complete stop, and while it takes some getting used to it’s actually fairly effective at topping up the i3’s juice while on the road. Cabled, you’re looking at charge times of about four hours on a 240-volt connection or 30 minutes with a DC Fast Charger (standard household 110-volt current balloons charging times up to 20 hours).

Of course, if you want to get the most out of the car’s 80-mile advertised battery range you’ll want to be a little less abrupt with the go-pedal and make use of the ECOPRO and ECOPRO+ driving modes, each of which dulls performance and reduces climate control battery drain in the name of squeezing a few more miles out of a single charge. To quell your anxiety even further there’s an available range extending gasoline generator, or REX, that can be installed as an option, allowing for up to 160 miles of total driving between plug-ins / fuel-ups (and in case you are in a position to delay your purchase, a 33 kWh battery that will officially offer 114 miles of EV driving is slated to hit production for 2017 models). 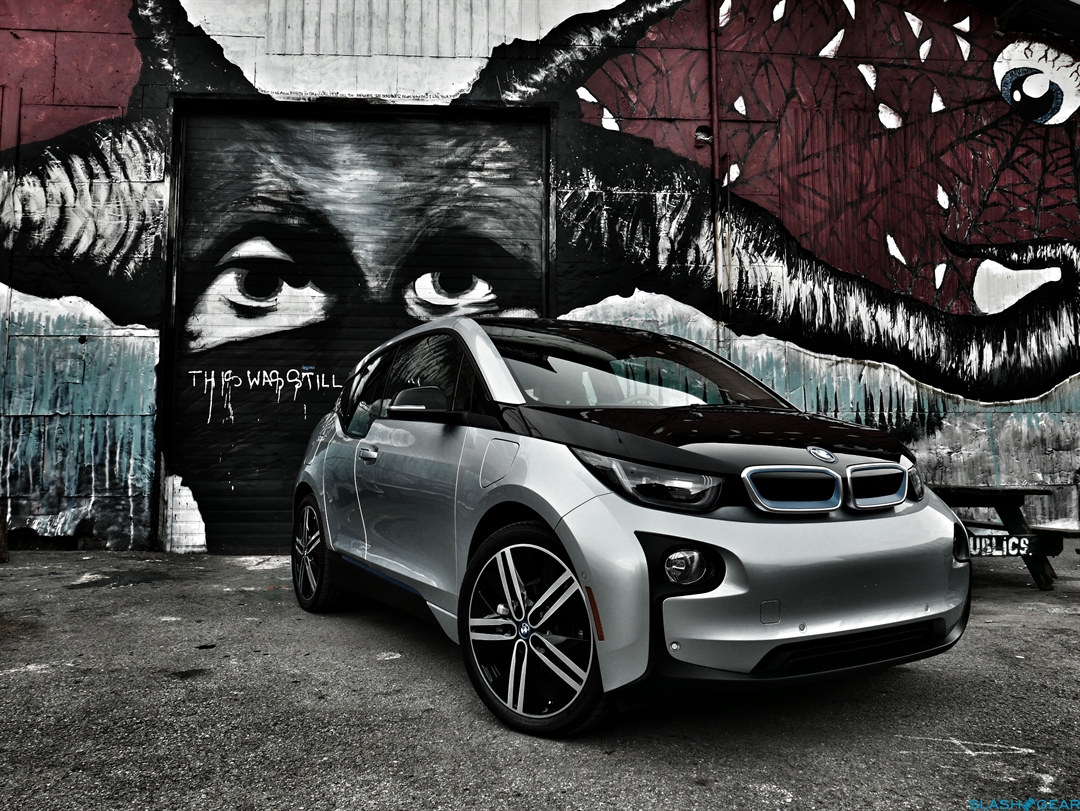 This was in fact the version of the BMW i3 I drove for a week, and I was curious to see what kind of impact the REX had not only on range, but also my enjoyment of the car. You see, the extra weight of the generator and its fuel tank (a tiny 2.4-gallon unit) actually knocks a fair amount of battery-only range out of the equation. I’d also had several i3 owners tell me that the harshness of the gas-powered genny’s operation (it’s a two-cylinder design) sapped a fair amount of pleasure from piloting the BMW while negatively impacting performance in a straight line.

Determined to run the battery down to the point where the REX would kick in, I discovered that careful, but not over-zealous attention being paid to regenerating electricity extended the electric-only range well past the EPA projection around town. I ended up doing 91 miles in total on battery power alone – almost 20 miles more than a REX-equipped car should be capable of – with several 10-mile highway stints thrown in for good measure. 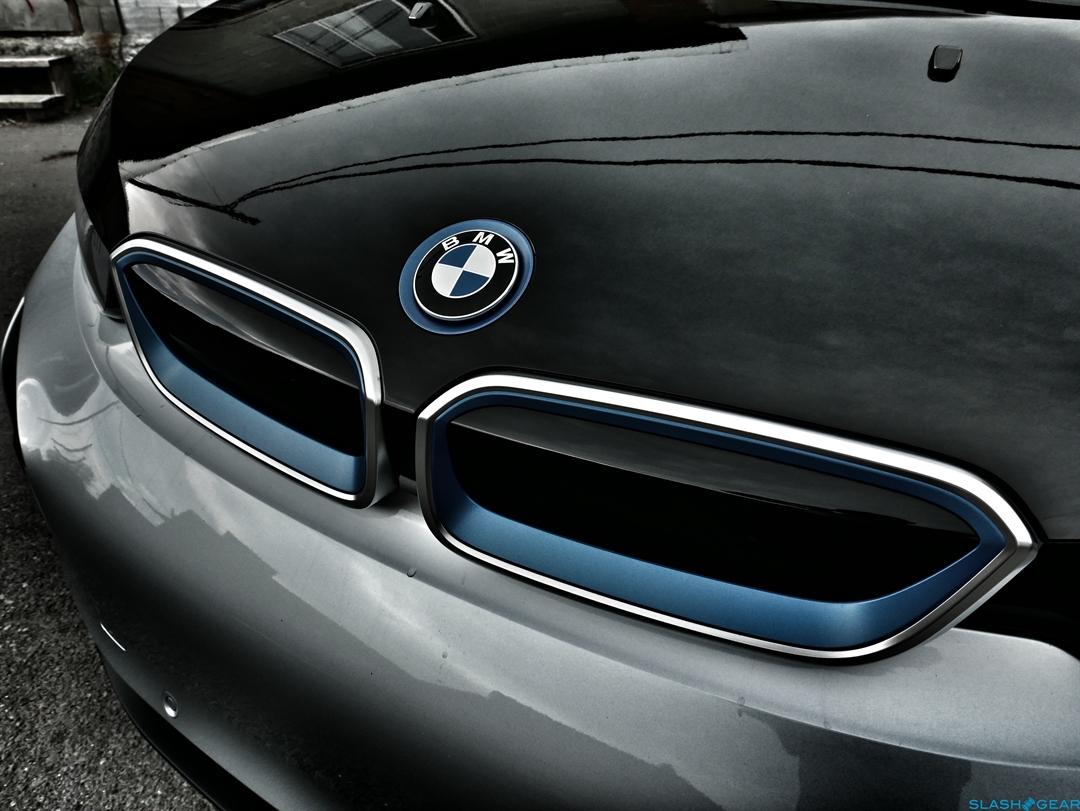 As for NVH, it’s true that the REX generator is perhaps the least-refined gasoline assist you’ll get on the EV market, projecting a buzzy ruckus from the rear of the vehicle that thankfully was easy enough to drown out with either the stereo system or the noise of traffic around me. Still, I never found acceleration to be noticeably blunted by the weight of the REX, as compared to past versions of the i3 I have driven that didn’t feature the system, nor did it push back all that hard in terms of power drop when driving with it on.

With a starting MSRP of $42,400, the 2016 BMW i3 isn’t the most affordable EV on the market, but it’s far from over-priced, particularly once you factor in any state or federal income tax credits that may be available to you for purchasing an electric vehicle. After a week behind the wheel of the i3, it’s easy to see how this fun, and stylish hatchback could find a role in the daily life of city-bound drivers seeking to shirk off their petro-dependency. To REX or not to REX will most likely be a question of one’s individual comfort level with disconnecting from the network of fuel stations that link the country from coast to coast, but either way BMW’s dream factory has engineered a star-making role for the i3 that seems destined for at least one, if not several, sequels.