Plutocrats and CEOs, your new ride is here. Mercedes-Benz has finally taken the wraps off of the new 2014 S-Class, and as you might expect it’s a cacophony of brand new tech, luxury fittings, more intelligent driving-aids than just about anything else on the road, and even a nod to fuel-efficiency and the environment. Set to hit dealers in September, the well-appointed four door is the first car not to feature a single traditional light bulb – everything is lit up by nearly 500 LEDs – and can even squirt non-lingering perfume through the cabin to “individualize the smell of the interior.”

Initially, four variants of the new car will be offered: the S400 HYBRID, S500, S350 BlueTEC and S300 BlueTEC HYBRID. Power ranges from 204HP to 455HP, depending on engine, with the S500 managing the 0-62mph dash in 4.8s. The S300 BlueTEC HYBRID is the most eco-friendly, with a 115g/km CO2 output and up to 53mpg (US); Mercedes will soon release an S500 Plug-In Hybrid model, too. All have adaptive damping air-suspension as standard, but the V8 S500 can be fitted with Road Surface Scan and Magic Body Control, which cooks up new suspension settings on-the-fly after tracking the condition of the upcoming road surface using stereo cameras on the front of the car. 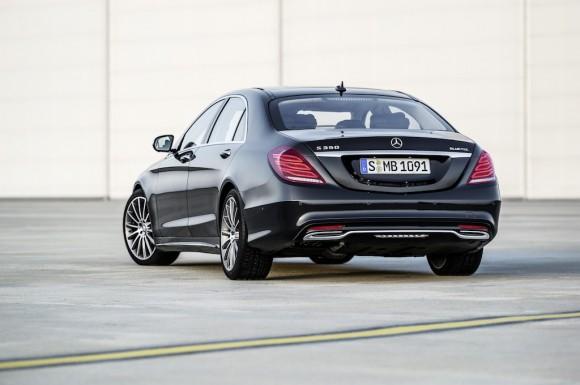 That’s not the only geekery Mercedes has indulged in. Lashings of aluminum mean the body is stiffer than the outgoing model, and the PRE-SAFE feature now automatically brakes when it spots pedestrians in the way, avoid whiplash by using the brakes when the stationary car is hit from the rear, and even use the seat belts to pull front-seat occupants out of the way of an impact. In the back, there are inflatable belt straps and motorized tightening systems to make sure passengers are getting the full benefit. 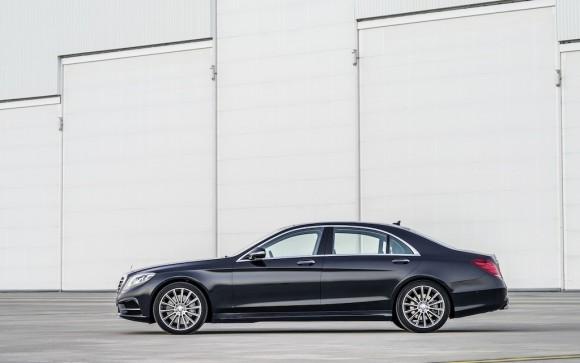 The new S-Class can’t quite do away with the driver altogether, but it’s getting close. Distronic Plus can take control of the steering and accelerator/brake, navigating lanes and following other vehicles, while active lane-keeping assistance makes sure the car stays where it should be. The brake-assist system now tracks crossing traffic and pedestrians, augmenting braking force as required, while Night View Assist Plus shows thermal views of the dark streets ahead, highlighting anything in the road. Sensors all round the car are networked together, so that they can react more intelligently.

Inside, meanwhile, there’s new wood, metal, and pearl-effect paint finishes, and the option of “First Class Rear” seating in the back which adds folding tables, phones, and other office-on-the-go kit. There’s more space both in the front and the rear, and a whole lot more tech: two 8:3 aspect, 12.3-inch LCD TFT screens on the dashboard for dynamic instruments and infotainment, with a touch-sensitive phone keypad, user-assignable keys for commonly-tweaked features, and the option to have text messages and emails read out. The new S-Class can also be controlled via voice, with the updated system recognizing full addresses in one go, rather than needing ZIP code, city, and street details spoken individually. 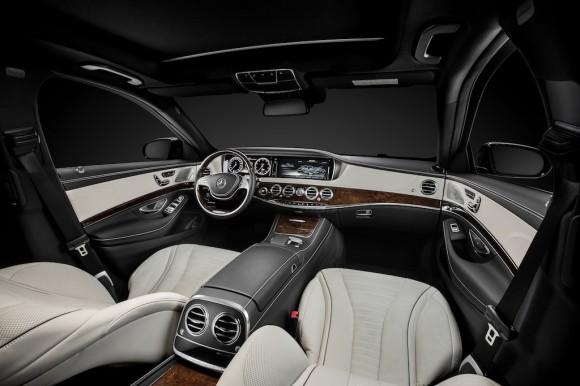 Various seat options are available to choose from, and they can massage you – with 14 separately-controlled air cushions, with optional warming – and actively cool you. In the long-wheelbase version, which Mercedes says it developed first since the car is expected to be a particularly big hit with chauffeured passengers in the Asia market – there’s the option of the largest backrest-reclining seats in the industry, no less.

As for entertainment, the standard kit has ten speakers and uses woofers embedded in the firewall to resonate through the chassis; that reduces door bulk and improves sound. Options include a Burmester Surround Sound system, and an even more expensive Burmester 3D Surround Sound version with up to 24 speakers in total. If you’re using the navigation system, you can show a Google Maps route on front and rear displays, complete with live traffic overlays.

Mobile TV and DVD are offered, as well as AM, FM, and DAB radio, and there’s the ability to make mixed-media playlists of music and video. Bluetooth audio is supported, and there are two USB inputs, Gracenote track data identification, the ability to view photos stored on USB or SD card, and WiFi hotspot functionality. In fact, the whole new COMAND Online system Mercedes has used is now powered by an Intel Atom chip, and the driver and front passenger can see different views – such as navigation and TV – on the same central display, using a split-view system.