Lexus has come a long way since the days of the buffed-up Toyota luxo-barge, and the 2014 Lexus IS is arguably the best illustration of that. True, the new 3-Series rival may not have the same wealth of outlandish madness as the LFA sportscar (though it does borrow some of the $375k limited-edition’s cabin features) or the brutish luxury of the LS, but the striking design and eager pricing make for a freshly competitive car. Lexus brought us out to the Rockingham Speedway to see how the 2014 IS ticks.

Distinctive, striking, and divisive: Lexus gives the 2014 IS the most extreme treatment of its L-finesse design language we’ve seen on a sedan to-date. The company’s designers describe the styling ethos as a combination of “intriguing elegance” and “incisive simplicity” which, in this case, means a sweeping, creasing riot of curves and surfaces that don’t ape BMW reserve or Cadillac crispness. 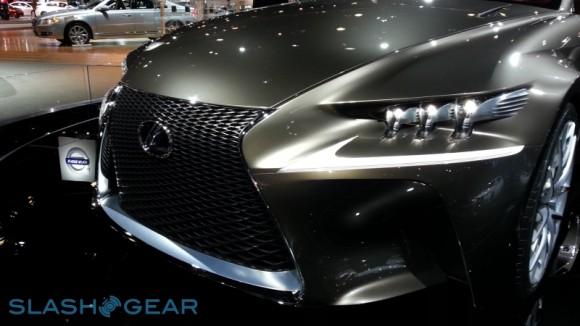 The enormous, pinched hourglass grille – Lexus refers to it as a “spindle” – is the most obvious flourish, starting low on the front edge of the hood and dipping deeply into where you’d traditionally find a separate front spoiler. With its chrome edging it’s certainly distinctive but, like many other elements of the new IS’ design, it works much better in person than in photos, which rob it off some of the three-dimensional complexity you get in the metal. 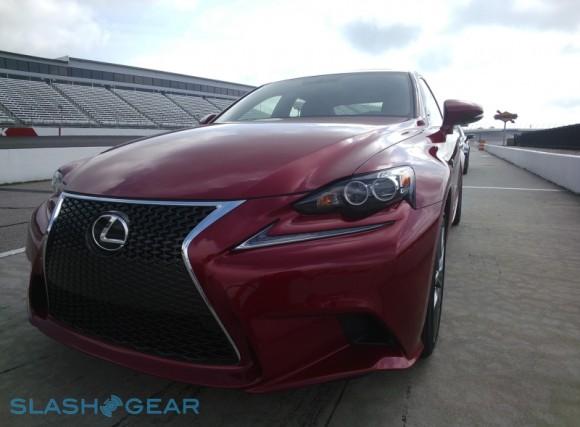 The F Sport spec pack – an option on the IS 250 and IS 350 – trades the standard grille bars for honeycomb mesh, and the IS looks all the better for it. Either way, though, the shape of the grille and how it cuts down to the front of the car makes the IS look lower and “sucked down” to the asphalt, emphasizing the broad, low stance.

Face-on, you also get the impact of the new car’s daytime running lights, which rather than being integrated into the main light clusters as we’ve seen on other cars, are split out into tick-style flourishes underneath. It’s an effect that looks particularly good in the darker finishes, like the nebula gray or matador red. 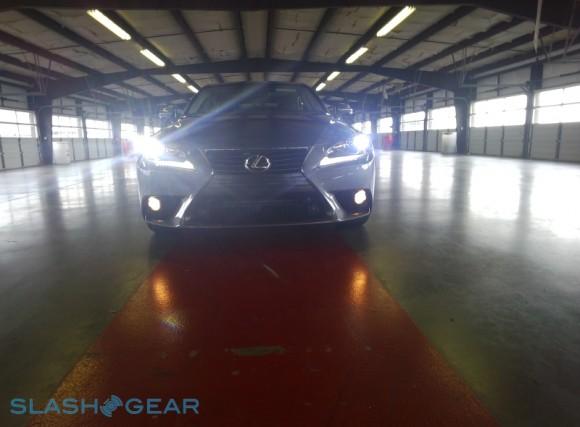 From that point back it’s a pleasing collection of sweeping lines and creases, including a strong shoulder-line – pinching up neatly into the rear door window – and a sharply rising twist that begins as the front doors end and pulls up all the way to the wrap-around rear lights. Get the lighting right, and they reflect and shine in particularly pleasing ways, giving the flanks a silkiness that the old IS didn’t get near. 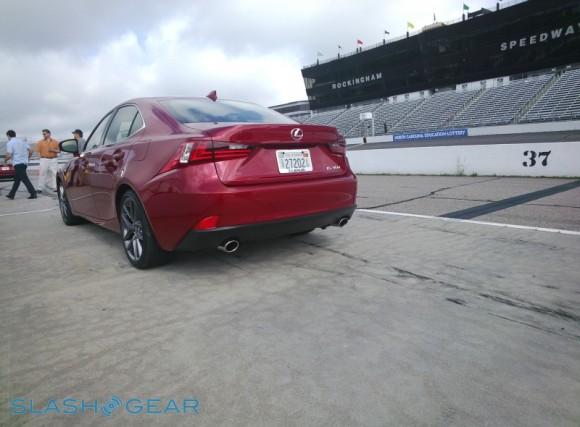 You only get two engine options in the 2014 IS, and neither of them are new. The 2.5-liter V6 and 3.5-liter V6 from the old car are carried over, though now there’s no manual option (which Lexus admits only around 1-percent of IS buyers every actually specified). 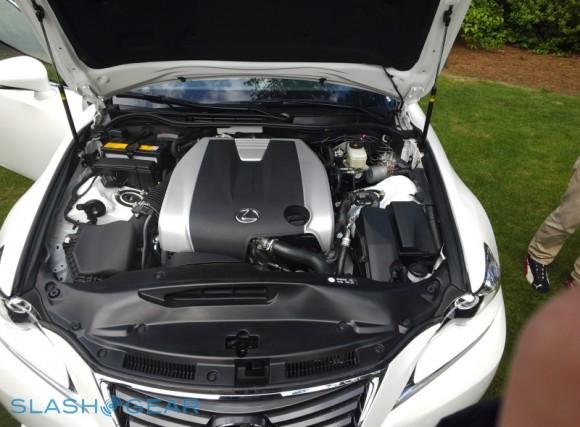 Instead, you get either the standard 6-speed auto, or – an option on the IS 350 – an 8-speed auto that was previously found on the IS F. Each slots paddle shifters behind the chunky steering wheel, or the ratios can be flicked through by jabbing at the stubby stick in the center. Of course, you can also leave the 2014 IS in auto mode.

With 204HP and 184 lb-ft of torque, the IS 250 sits roughly on a par for power with the naturally-aspirated 2.5-liter Cadillac ATS (the entry-level BMW 320i does better in torque but falls behind in horsepower). Official numbers are 7.7s 0-60mph for the RWD model (8.3s for the AWD) and it doesn’t feel the most spritely “performance sedan” we’ve driven. The 6-speed gearbox is solid in its changes, but not especially eager.

Far better is the IS 350 which steps up to 306HP, particularly if you’re running that through the 8-speed ‘box. Lexus’ quotes 5.6s for your 0-60mph run, and behind the wheel we can believe it, with the car eager to thrum through the gears with a pleasingly throaty growl from the engine. Lexus knows that good sound makes for more enjoyable driving, too, with the F Sport package piping a little more of the under-the-hood audio into the cabin.

Lexus claims to have done special things with the 2014 IS’ suspension and handling, and – thanks to some side-by-side comparison with the outgoing 2013 car – it’s clear that’s no empty boast. The power-assisted steering is noticeably meatier, and we were able to throw the new car around corners with more confidence than its predecessor. Among the changes are a more solidly constructed chassis, and that platform makes for more predictable handling.

That’s not to say the new IS is only happy if you’re thrashing it. At more appropriate speeds it’s smooth and stable, with no bump or shudder; rear seat passengers reported an altogether comfortable ride. The F Sport variant unsurprisingly tightens things up with an eye on more aggressive driving, but it’s still capable of wafting if you’re designated driver.

It’s worth noting that the cars we were testing were prototypes; we’ll revisit the IS when production models are available.

Lexus made its name, in part, by throwing just about everything its rivals would leave optional into the standard mix. The IS isn’t quite so comprehensive – the LS, after all, starts at over $70k – but you still get a good amount of baseline equipment. 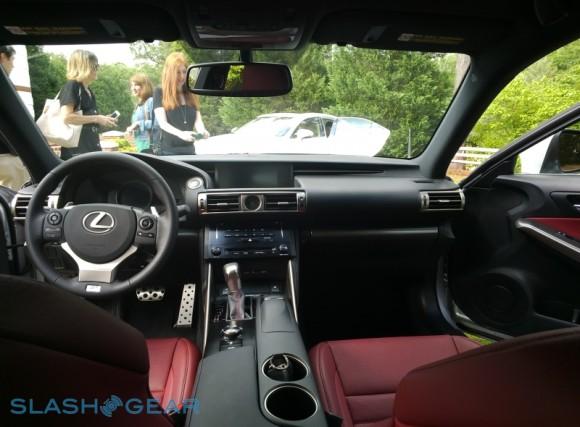 Dual-zone climate control, keyless entry, a power moonroof, Bluetooth audio, and HD Radio are standard, along with “NuLuxe” faux-leather. If you want the real hide, you’ll have to step up to the Luxury Package which also throws in wood trim accents, rain-sensing wipers, auto-dimming mirrors, electric memory seats, and a blind-spot monitor with rear cross-traffic alert. A more affordable Premium Pacgae adds heating/ventilation to the NuLuxe seats.

There’s also the Navigation Package, with a 7-inch color display, backup camera, voice command, and Lexus Enform, the company’s internet-connected hub complete with Bing search, Pandora streaming, Facebook Places, Yelp integration, and navigation. A Mark Levinson Audio Package ($3,225) adds a 15-speaker A/V system to that, with a 1,500W Class-D amp, subwoofer, and machined aluminum controls. It certainly sounds impressive, though the standard-fit audio system is no slouch on its own.

Sit inside, and the tiered dashboard layout is packed with controls but reasonable straightforward to familiarize yourself with. A navigation control in the center console scrolls through the main 7-inch LCD, and only the analog clock reminds you of Lexus’ more staid history. The meaty steering wheel feels great – though it’s peppered with buttons – and the seats are comfortable and sit lower in the car than before, leaving you feeling sportily cocooned.

Step up to the F Sport package, however, and the 2014 IS’ real interior glitz appears. The sports seats get more ample bolstering and hold you nicely in the corners, though they’re still NuLuxe rather than proper leather (albeit with heating as standard). Most exciting is the moving instrumentation, borrowed from the LFA: press a button and the combo speedometer/tachometer slides across to reveal a 4.2-inch LCD with secondary information, such as fuel economy. Press it again, and it slides back to dominate the binnacle with no distractions.

Again, compared to the outgoing car, the new IS is a marked improvement. The seats hug you more closely – a boon during more outlandish cornering – while, in the back, the seats in both regular and F Sport trim are comfortable, and – a first for Lexus – can be dropped down with a 60/40 split for accommodating bigger items of luggage.

It’s likely to be aesthetics, not specifications, that prompt most decisions about the new IS, however. Opinions of those we’ve talked to are split; some, like us, appreciate how Lexus has opted for something that’s distinctive, though others prefer the more mainstream good looks of BMW’s car. As we said, though, it’s undoubtedly a car that looks better in real life than on the screen. 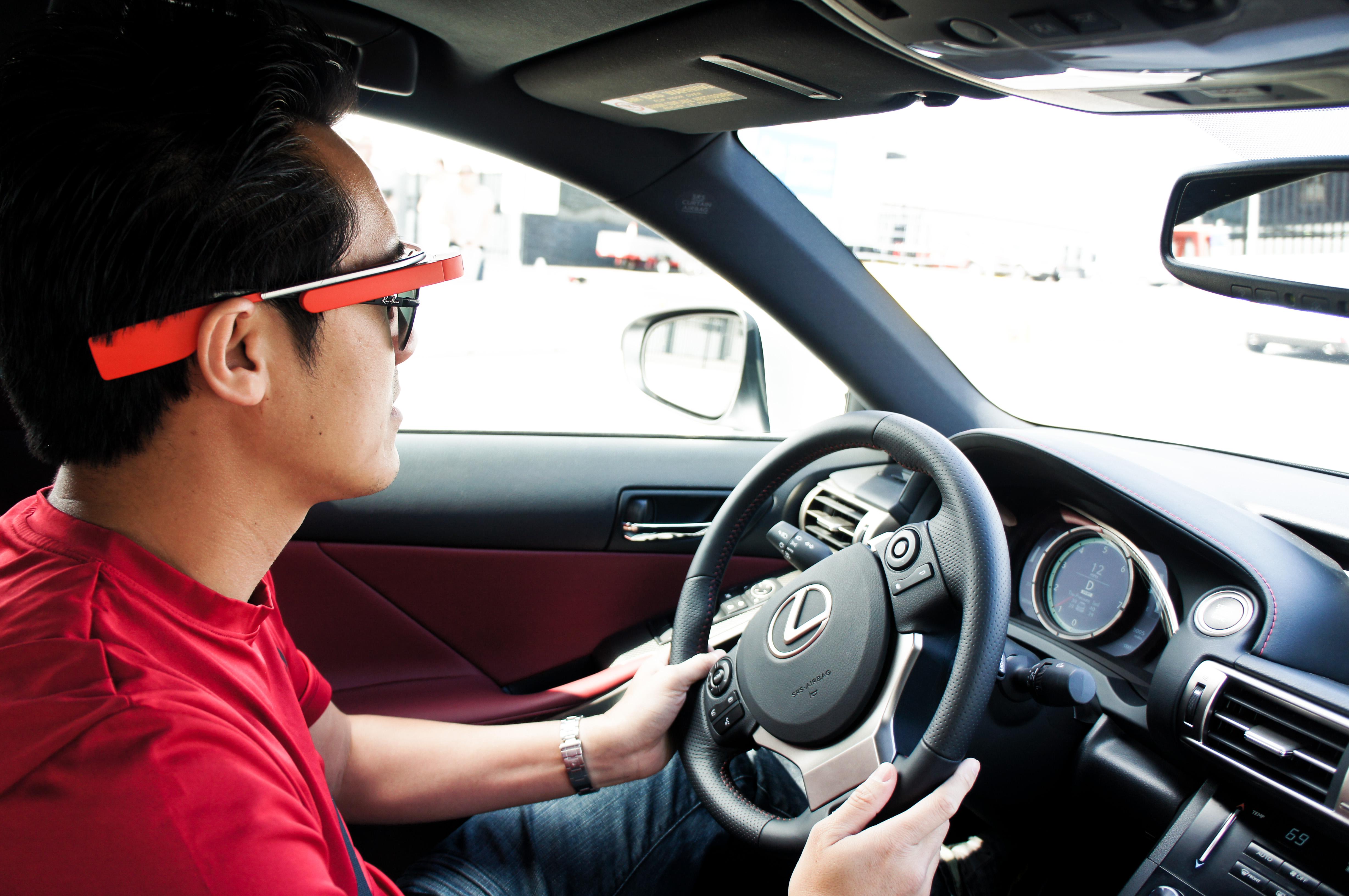 For that matter, it’s also a car that benefits hugely from the larger engine option. Where the IS 250 is solid, the IS 350’s extra grunt gives it some much-needed sparkle. If you can afford the F Sport package then we’d say it’s well worth it, with the worked-over suspension particularly benefiting. That’s not a cheap car by any means, but it’s the spec level that’s most fitting to the no-holds-barred design and capable chassis.