Kia has revealed its second-generation Soul, the company’s compact city car, with a more distinctive design, a bigger features list, and the promise of a more involving driving experience. Due to arrive in showrooms in Q4 2013, the new Soul has a stiffer chassis than the model it replaces, introduces a new engine, and even adds Android to the dashboard for better multimedia, navigation, and integration with your phone. Kia invited us down to try out the new 2014 Soul; read on for our first impressions.

Designing a car for city dwellers is tricky. The Soul has always tried for a balance of affordability with quirkiness, but the 2014 model year car aims to add in driving performance too. To do that, Kia has upgraded the underlying platform, making it 28.7-percent stiffer thanks to the introduction of either Ultra HIgh Strength Steel (making up 35-percent) or High Strength Steel (making up a further 31-percent). The front and rear suspension has also been addressed, with the introduction of four bushings on the front subframe to cut harshness on poor-quality roads, while the rear shock absorbers are now longer for more travel and thus greater comfort.

It adds up to a car that feels more zippy and responsive behind the wheel, without the tendency to wallow in faster cornering, though in addition to the handling improvements there are other benefits too. The greater proportion of high-strength materials means areas like the A-pillars can be slimmer, improving visibility versus the old Soul, and the old two-piece steering box has been replaced with a new, one-piece unit that can be more centrally mounted for better balance, a more direct feel, and fewer road vibrations.


Under the hood there’s a choice of two engines. The entry-level Base Soul, from $14,700, gets a 1.6L I-4 DOHC gasoline direct injection (GDI) power plant good for 130HP and 118 lb.-ft of torque, while the Plus and Exclaim variants (from $18,200 and $20,300 respectively) get a new, GDI version of Kia’s 2.0L NU engine, with 164HP and 151 lb.-ft. of torque. Each has been further massaged into delivering more torque at lower engine speeds, too, since that’s when the greater push will be most needed during city driving.

The six-speed manual gearbox (a six-speed automatic is optional) is standard on the 1.6L Soul, but the Plus and Exclaim models get the auto only. The automatic makes perfect sense for urban use, though you’ll rarely see the most-efficient sixth gear since Kia has opted for the highest, most frugal gearing it can deliver. Still, the shifts are smooth and show minimal lag.


Kia also told us that one of its key priorities was, while making the 2014 Soul more refined, at the same time not diluting the distinctiveness that it credited with pushing 2011 Soul sales to over 100,000. In fact, the company name-checked the Scion xB as a particular cautionary example, arguing that the second-generation of Toyota’s urban-friendly car slumped after the company tried to make it more grown-up. 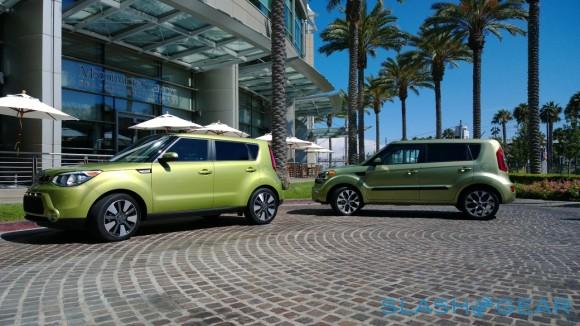 Part of that mindfulness is keeping the new model roughly the same size as the outgoing Soul. So, the 2014 version is just 0.8-inches longer (entirely in the wheelbase) and 0.6-inches wider than the model it replaces, but actually 0.4-inches lower. Even so, Kia has managed to rearrange things so that there is more trunk space, now at 24.2 cu.ft., and a 2.4-inch wider cargo opening.

The distinctiveness continues inside, with Kia’s oddball 2012 Track’ster concept lending many of its flourishes to the production Soul. That’s predominantly through the frequent use of circular dials, housings, vents, and such, and the whole thing looks good and feels, for the most part, quality to the touch. The center console is dominated by the optional UVO infotainment unit, with its 8-inch color capacitive touchscreen uses to navigate a new version of Kia’s UVO eServices.

Compared to the outgoing Soul, the new UVO system has a bigger display and broader viewing angles; that extra size means Kia can fit both navigation and multimedia buttons on-screen simultaneously, reducing the amount of menu hopping required. Pandora is now natively loaded to the car, rather than simply streamed from a Bluetooth-tethered smartphone, and there are direction instructions on their own 4.3-inch LCD in the center of the driver’s instrumentation binnacle. 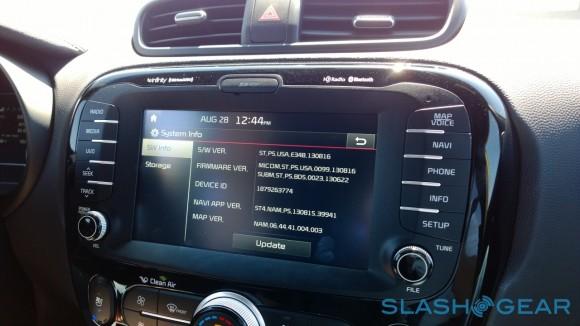 The 2014 Soul supports SirusXM data services for both traffic news and nearby fuel prices, among other things, with a three month subscription included. That’s even without UVO specified; the Base Soul still gets Bluetooth and USB/AUX inputs along with six speakers. The Soul Plus steps up to UVO, a reversing camera, and optional 350W audio system, navigation, and multicolor LED “mood lighting”, along with ventilated front seats with driver-side power adjustment.

Finally, the Soul Exclaim gets a cooled glovebox, special 18-inch alloy wheels versus the 17-inch of the Plus and the 16-inch of the Base, and optionally leather seats, push-button start, and other comfort features. 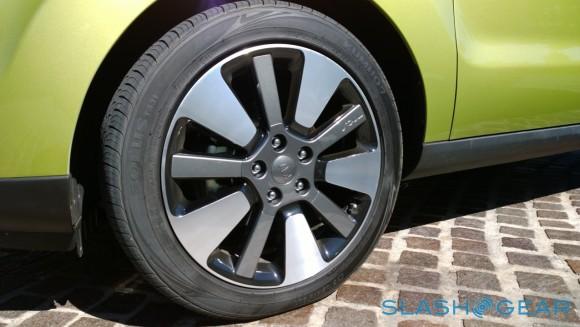 That’s a lot of kit for a city car, though you can bypass most of the extras with the base model if your primary motivation is price. If you want the more cosseting add-ons, the Kia certainly has the options list to sift through, though the competition starts to get tougher when you head over $20k.

From our first impressions, the mid-range 2014 Soul Plus seems the car to have, with the straightforward and well-implemented UVO system, but we’ll reserve final judgement for when we have a review car on the drive.