“The Z/28 is really going to be the icing on the cake for the Camaro.” So says Al Oppenheimer, chief engineer on Chevrolet’s Camaro team, and while he’s unsurprisingly a little biased about GM’s street-legal race car, having been out on the track in the 2014 Camaro Z/28 it’s hard not to catch some of that enthusiasm. Chevrolet’s cars aren’t production ready yet – though even when they are, GM will only be making 3,000-4,000 over the course of two years – and the test cars are hand-built, down to the special 505 HP engines, but already the potential is clear. Read on for our first impressions.

Chevy’s Z/28 name has some history to it, first added to a Camaro back in 1967 when GM took the car road racing. For the 2014 car, Chevy is looking to track day enthusiasts as the target audience for the Z/28, aiming to make not only a muscle car worthy of the title, but something that can give Porsche and Lamborghini drivers sleepless nights too.

The early numbers would suggest they’ve done just that. The Z/28 musters 505 HP and 481 kb-fit of torque from its 7.0L LS7 engine, and Chevrolet’s trials around the Nürburgring show there’s no trouble getting that power down, even in the wet. 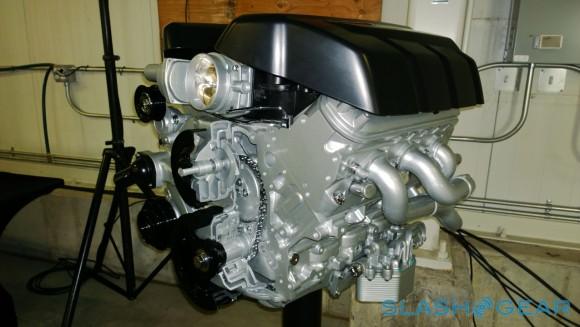 On a damp track, and at times in full-on rain, the Z/28 completed the famous track in 7:37:40: four seconds faster than its Camaro ZL1 sibling. It’s also faster than Porsche’s 911 Carrera S and Lamborghini’s Murcielago LP640. Altogether, GM put the Z/28 through almost 1,000 miles on the German course, for a total of ten hours driving; it’s the equivalent, roughly, of a year’s amateur-level track use, compressed into one focused period. The company even estimates that, on a dry course, the car could cut a further six seconds from its fastest lap.

So just how has GM done it? The Camaro Z/28 is a careful balance of road car and track-ready monster, and it’s not, the company insisted to us, intended to be a “comfortable” car to drive, more a rewarding one. Oppenheimer’s engineering team auditioned around 190 unique parts, exclusive from the 2014 Camaro 1SS to the Z/28, with each and every one having to earn its way into the car.

Those that did make it come from some of the best known performance brands in racing. Brembo ceramic composite brakes work with 305/30ZR19 Pirelli Trofeo R tires for a braking setup that, GM tells us, can produce 1.5g during deceleration, without losing effectiveness after repeated laps. The Z/28 is both lighter and lower than the SS: Chevy has cut 80-100 pounds from the car, and lowered the center of gravity by 33mm. Numerous chassis changes leave the car capable of generating 1.08g when cornering; “it’s not just about the fastest lap time,” Oppenheimer explained, “but consistently fast lap times.” 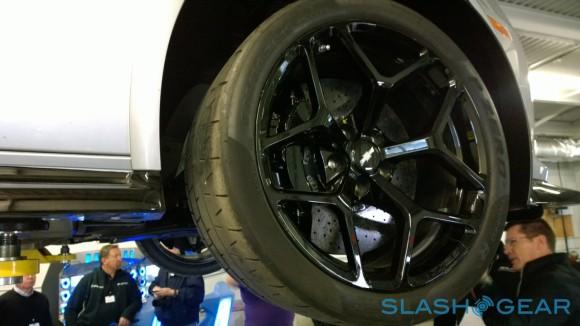 It’s relatively straightforward to make a fast track car. It’s a lot harder when you want a car you can not only drive on the track, but to it, and then home again afterwards. Chevy doesn’t give drivers luxury in the Z/28 – the pre-production cars were particularly spartan, but even the final versions won’t exactly be opulent inside – and even things we take for granted these days, like air conditioning, will be an option. Don’t be surprised if you get critical looks for ticking the cool air box on the order form, since at 12.9kg you’ll be sacrificing a little speed to have it.

In fact the list of weight trimming measures is huge. The biggest saving came from switching to lightweight wheels and tires – cutting 8.7kg and 13.2kg respectively, even with the front tires being the widest on any production car – but the carbon ceramic breaks cut 9.6kg, while a change in the acoustic deadener and insulation cuts 4.6kg. Replacing the rear seats with lighter alternatives saves 4.7kg, and cutting the trunk trim saves a further 2.7kg. Chevrolet even opted for 0.3mm thinner rear glass and pared back the wiring harness to remove any unnecessary cables the Z/28 wasn’t using, dropping the curb weight by 400g and 500g respectively. 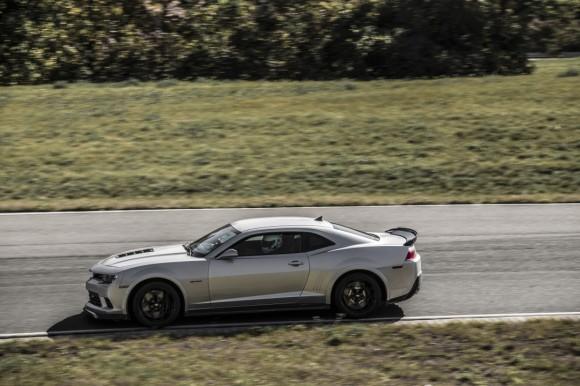 Overall, the Z/28 weighs in at 3,836 pounds, and has a 7.59 pound/horsepower ratio. What’s been left is the best a racer could hope for: Pankl titanium connecting rods, unique on a production Camaro, and Mahle pistons, while K&N’s cold-air induction and exhaust headers feature on the intake. The Z/28 gets the first ever dry sump lubrication system in a production Camaro – ensuring oil pressure doesn’t drop during periods of high lateral acceleration – while the oil itself is cooled by a liquid-to-liquid system similar to the one GM used on the Corvette ZR1.

No automatic gearbox or even high-speed paddle shifters behind the Z/28’s wheel: instead, drivers get a six-speed manual Tremec TR6060 with close-ratio gearing for a final 3,91:1 drive ratio (in contrast, the Camaro SS has a 3.45:1 ratio). It’s cooled by a special, high-capacity liquid-to-liquid oil cooler system, similar to that of the Camaro ZL1, while each gear gets either double- or triple-cone synchronizers, which can individually change the speeds of each gear-shift.

Power is pushed out through a helical limited slip, optimized for better cornering. Unlike a regular limited-slip, which are designed for the most traction in a straight line, GM opted for a more complex system that prioritizes ABS for individual wheel slides at the start of a corner, better steering precision through zero preloading in mid-corner, and then faster torque coupling for the exit. It may sound fussy, but GM says it trimmed 0.7s per lap off its Z/28 Milford Road Course testing.

Getting going and keeping going is important, but so is stopping, and so the Z/28’s brakes are special too. Carbon-ceramic composite two-piece rotors are standard – 394 x 36mm at the front, and 390 x 32mm at the rear – with fixed, mono bloc pistons – six at the front, four at the rear – with bigger pads than usual. As for the suspension, it’s 85-percent stiffer through the front springs and 65-percent stiffer through the rear, while the lower-trailing-link bushings on the rear and the lower-arm link bushings on the front are 25- and 50-percent stiffer respectively. The cut in rebound travel means GM can use smaller stabilizer bars, too.

Most of the changes are under the Z/28’s skin; however, the aesthetics have evolved from the regular Camaro, and not just for the sake of design. In fact, GM says the track car produces 440 pounds more downforce at 150mph than the Camaro SS, thanks to a new front splitter, rear spoiler, hood vent, rockers, and gurney lip fender flares. It doesn’t hurt that the overall look is one that’s both aggressive and pleasingly detailed.

You don’t see that when you’re inside the car, but somehow you don’t really mind. GM wasn’t ready to let us take the wheel of the Z/28 yet – that will have to wait until these priceless prototypes make way for production cars – but even in the passenger seat the car’s potential is clear.

Straight line speed is there, of course, but it’s the corners that are most impressive. The handling is so good that you can enter a corner carrying far more speed than you could in a regular Camaro, even the SS, and though you get the occasional squeal from the wheels we never felt like the car was becoming unseated. You exit faster too, the sides of the track whipping past the narrow windows.

Half of the fun is in the noise. GM’s naturally-aspirated engine opts for big capacity rather than forced induction, and while the payoff is an immediacy to the pick-up, it also pays dividends in the sound. The 7-liter engine bellows and rumbles, coughing throatily during the snappish gearshifts, a slightly frantic hollering when you get to 7,000rpm. It’s an addictive noise, that makes you want to go out again for just one more lap, and then another. 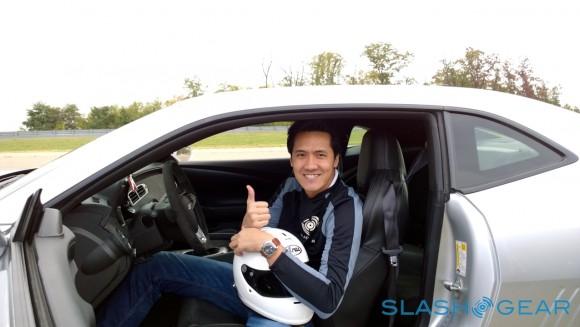 GM’s target audience for the Z/28 are weekend racers and track owners who take their driving seriously and want a car that can keep up with their ambitions. Such drivers will to wait until late in Q1 next year before they can grab the keys to this hottest of Camaros, however, and closer to that launch window to find out how much it will cost.