When it comes to big-time actors from the 60s and 70s, one of the biggest was Steve McQueen. McQueen was in some of the most iconic movies from the period, including classics like “Bullitt” and “Le Mans.” The incredible 1970 Porsche 917 K in the images here will look familiar to any fans of the film “Le Mans” as a car featured heavily in the race footage.

The 917 K racer has a flat-12 cylinder air-cooled engine that could push the car to speeds of over 230 mph. In its day, the car was a standard for performance in endurance sports car racing and was dominant over three seasons of World Championship racing. This car is chassis 026 and was constructed as one of three 1970 24 Hours of Le Mans race entries for the JW Automotive Engineering / Gulf Racing team.

The Gulf livery is one of the most iconic color schemes of any racecar, and this particular car is known for having an entire roof in orange down to the beltline. The other two cars had orange center stripes. The car has race number 22 and was driven by David Hobbs and Mike Hailwood. The car completed 49 laps during the race, running as high as third place overall at one point.

However, the car failed to complete the race after it hydroplaned on lap 50 and crashed. After the race, the factory repaired the chassis and renumbered it to 031 along with being re-bodied as a 917 Spyder intended to compete in the 1972 European InterSerie Championship for Group 7 cars. The car was raced for many years and had success under its belt. 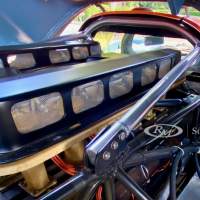 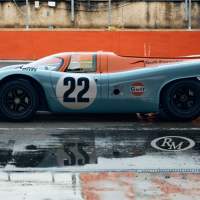 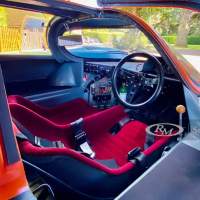 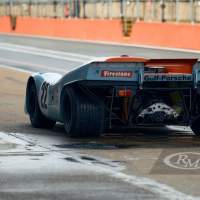 The car is currently owned by an unnamed “gentleman” who acquired the Spyder form over a decade ago. It was fully restored to its original Le Mans coupe specification. Currently, there is no estimate on how much the car might bring at auction. It will be sold at the RM Sotheby’s auction in Monterey, California, from August 13 through the 14th.