YouTube Autoplay rolls out, here’s how to turn it off

Websites get more traffic and, in some cases, more money, the longer you stay on their site and the more you get hooked on their content. On YouTube, that equates to watching more and more videos without having to stray away from the page. And what better way to do that than by enticing you video after video after video. That’s right, YouTube’s once experimental Autoplay feature is now rolling out to all users to keep you from getting bored, or escaping. Fortunately, it’s easy to turn it off.

Of course, YouTube is billing this feature as something that will help you decide what to watch next. Actually, it has already decided even before hand in the What’s Next list. Now it’s just providing you with very little reason not to watch them. It’s somewhat like Amazon’s “Advanced Streaming and Prediction” feature or ASAP, which also tries to anticipate the video you want to watch next. But Amazon’s ASAP is slightly more useful as it starts to buffer the next video even while the current one is still playing but has finished buffering. YouTube’s feature still waits for the video to load.

While for some who are more accepting of YouTube’s choices, it’s a convenient alternative to having to click through the list. For some, it might be an annoyance. Good thing YouTube provides several ways out of it. You can pause the autoplay countdown simply by scrolling past the video player area or typing something, whether a comment or a search query. You can also cancel the countdown completely by clicking on the Cancel text. 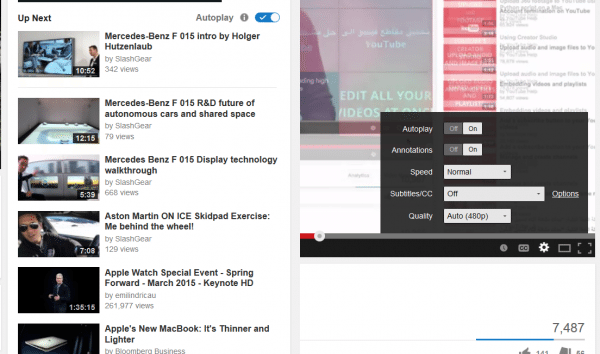 But if you really want to turn Autoplay off for good, it’s also easy to do so. You can either switch it off from the top right corner of the What’s Next list or go into the video’s gear icon and turn it from there. YouTube nicely remembers this decision so that you don’t have to do it each and every time.