As Intel’s investment into the Moblin OS gets increasing attention, and more non-technical users are introduced to Linux-based platforms in the shape of low-cost netbooks, 2009 will see open-source become more mainstream than ever before.  Under the hood there’s much that makes Linux safer, more efficient and secure than rival systems, but for most new users it’s what they can see on-screen that counts.  SlashGear caught up with Xfce creator Olivier Fourdan, whose desktop environment has not only been selected by Intel for Moblin but can be found on many existing Linux netbooks, and talked Intel, Moblin, the future for netbooks and what challenges he sees for open-source newcomer Android.

Q1. Can you give our readers some background of Xfce, perhaps explain a little of what it does, and your involvement with the project?

Xfce is what you’d call a desktop environment, it includes not only the usual applications you would expect from a desktop, ie a window manager, a panel, a file manager, etc. but also an infrastructure such as a settings mechanism now based on DBUS and all the development libraries that help to write applications.

Like GNOME, Xfce is based on the gtk+ toolkit but it does not use gconf nor other gnome libs, except libwnck (that now replaces the equivalent library that we had in Xfce up to 4.4) or gstreamer (for the volume control applet).

Xfce is not new, I started the project in late 1996, before GNOME or gtk+ even existed, and the project has evolved from a single man project to the fairly large project that it is now, with several core developers and a large base of contributors and users.

I do not really keep count of the distributions use Xfce as their default desktop (and that’s not just Linux, there are also some Opensolaris variants and BSD ones too), but we list the main ones on the web site. Actually, thanks to the standardization efforts introduced by the freedesktop.org, you can use Xfce with other different components, for example some distributions replace the window manager that comes with Xfce with Compiz, or the panel with cairo dock or some other panel.

It is important to remember that Xfce is not a window manager, it obviously includes a window manager, but it’s a lot more than that (even if the window manager remains one of the core components and at the heart of the global user experience), and each component can be replaced by another compatible component from another project, so Xfce or parts of Xfce can be found in many different distributions.

Q3. With netbooks taking the market by storm, Intel has taken it upon itself to develop a new distro called Moblin, and it’s utilizing Xfce as its default Window Manager. What do you think about Intel’s move, how do you think it could affect Linux take-up by non-technical users, and do you think it will help Xfce adoption?

I believe Intel’s support of Linux and free software is very important, not only the Moblin project but also all the code that is being developed openly by Intel, like Powertop, the Intel drivers for Xorg, WiFi, etc.

I think it’s definitely a great contribution to free software. As for Linux taking up on non technical users, it’s a lot more complex than just ease of use. People are so used to Windows, they’ve been using Windows for so long that they don’t realize that Windows is not easier than Linux (nobody is born knowing Windows, there’s always a learning curve and learning Windows is no easier than learning Mac OS pr Linux). I believe the user interfaces (GNOME, KDE, Xfce, whatever) that come with Linux are much more versatile, easy to use and more productive than what Windows offers, but they are different and not everybody feels confident when it’s different.

Learning a new interface, a new system, requires an effort, and Linux has to provide something that’s worth that effort. It could be because it’s cheaper (but I don’t think this is sustainable in the long run) or because it’s faster, or because it looks better, or it’s easier, or more productive, etc. Netbook vendors have started opening the road, but I feel frustrated because when I look at what is offered today, I think it’s too little, it’s either a locked down version or just a plain Linux distributions. What I’d expect would be in between, a full featured, configurable and attractive desktop yet customized for the hardware of the Netbook. That’s somehow what I achieved after tweaking the default installation of my Acer Aspire One to get rid of the limitations imposed by the default installation.

Q4. You’ve mentioned before that Xfce team was not involved with Moblin; are the Xfce team open to working together with Intel for better implementation of Xfce in the Moblin OS?

But we received interesting patches from Intel developers, including patches to improve the start up time of the session. In the future, for example, I’d be great to use some of Intel technologies, such as an optional Clutter backend for the compositor embedded in the Xfce window manager. 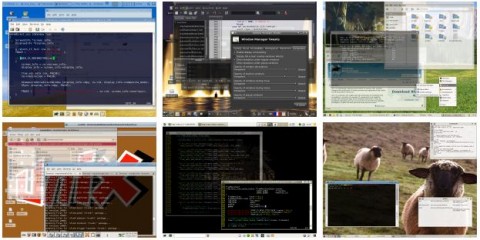 Start-up time is also something considering, and Intel has demoed that it was possible to boot Linux, and a full Xfce desktop in less than 5 seconds. That’s impressive.  [See here for more on the 5 second boot demo]

Q6. According to manufacturers, the vast majority of netbook buyers are choosing Windows XP over Linux, despite price advantages to open- source. Why do you think that is, and what might you do to turn the tide?

That’s a corollary of Q3, people want XP because they know XP. Even non technical users know how to deal with XP, and if not, they know someone who can help. And when it does not work, they just reinstall the system.

The advantage of Open Source is not the price, it’s its open nature. Knowledge is freedom and Open Source is all about freedom, no closed source alternative can match that. But this not something so obvious when you’re new to Open Source.

The challenge is to demonstrate the advantage of that freedom to end users, and to the hardware vendors. You cannot grab Linux, put it on a device and expect people to just adopt it like that, that requires a lot of commitment and I would like to see more and clearer commitment from hardware vendors. Again, in this regard, Intel is showing the way.

Q7. What can we expect from the Xfce team in 2009? Any particular milestones you’d like to see on the Xfce roadmap?

Q8. My personal favorite Xfce application (sub-project) is Midori (I’ve used it since 0.0.1x release). What is your favorite sub-project in Xfce?

All of the goodies that you find in goodies.xfce.org, really, are important, it’s what makes the Xfce more enjoyable to use. I don’t really have any favourite.

Q9. Looking more generally at netbooks, and the technology currently being developed by not only Intel with the Atom, but VIA’s Nano, NVIDIA’s Ion and AMD’s Neo, where do you see the segment evolving?

Hard to tell, I would not consider myself as an expert in the area. The limit between the netbooks and the entry level laptops is some kind of a gray area, but CPU power or 3D capabilities is not what I expect the most from a netbook.

What I expect from a netbook is battery life, light weight and small form-factor. I do not care much about power, I have another very powerful 17-inch laptop for that. And I am already impressed by what the netbook can do today, so I believe that running after performance for netbooks is not the way to go (unless you want to run the latest Windows on them, but I am not interested in that either), we’ve been there with desktops and laptops already, so I think it’s wrong to look at netbooks from that point of view.

Q10. Google’s Android platform has brought open-source software into the spotlight with a mainstream audience, and the company has been open about their plans to put the OS into many devices, not just cellphones. How do you think Android might affect the Linux ecosystem, and have you or the rest of the team considered developing for the platform?

No, admittedly, I am not much interested in Android yet. The code might be released under an open source license, but the development of Android seems to be pretty centralized. In my opinion, there is difference between a project like Moblin made of existing open source projects, each one with its existing community of developers, and Android that is Google’s own project released under an Open Source license. That’s the challenge for Android, build its own community of Open Source developers.

Many thanks to Olivier for taking the time to answer our questions.  You can find out more about Xfce at the official site here.