With Windows 8, Microsoft changed the Windows Start menu so drastically that users were up in arms about it. It never truly backed down from that tile-based design even if it made concessions along the way. With Windows 10 and its successive feature updates, the company is transforming that menu into an advertising dashboard for its apps and services. Unsurprisingly, not a few users are quite peeved by it but, fortunately, it’s not that hard to “fix” once and for all.

To be fair, this isn’t exactly a new feature. The Windows 10 Start menu has always had a “Suggested” section at the top where it “occasionally” recommends its own Windows Store apps. This is, of course, its prerogative as Windows’ maker but this most recent campaign is leaving a bad taste in users’ mouths.

It all revolves around the new Chromium-based Edge browser which, on its own, might not be so bad. It’s still not enough to convince Windows users to move away from Chrome or Firefox so now Microsoft is putting “ads” convincing users to switch away from their current default browser and into Edge’s arm. And it doesn’t merely put Edge’s name but specifically calls out whatever browser you may be using as a default. 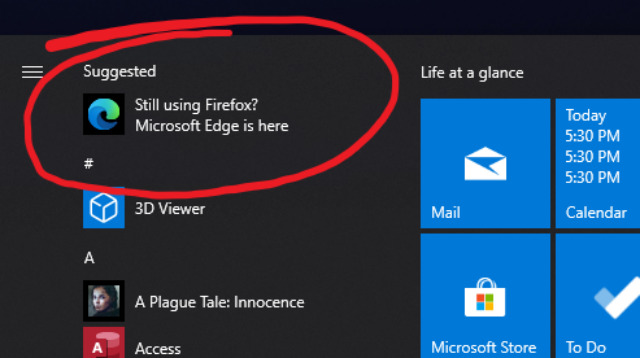 It’s easy enough to get rid of, provided you’re willing to turn off Suggestions all together. Simply go into Settings > Personalisation > Start and uncheck “Show suggestions occasionally in Start”. This isn’t the first time Microsoft has tried to dissuade Windows users from installing any other browser or setting those as a default. It certainly won’t be the last.

That said, this incident does emphasize what the Start menu is turning into. In its most recent update, Microsoft has shifted to using Bing to power Windows 10 Search, which has the side effect of rendering it useless if a server-side error occurs. Since it might not be able to do so more explicitly, Microsoft will eventually make the Windows Start menu and Search as an advertisement dashboard. Presuming, of course, it doesn’t get sued for this stunt.