Although its reputation was never entirely spotless, Microsoft didn’t exactly become a hot privacy name, at least not like Google or Facebook, until it launched Windows 10. The latest and current version of the operating system and every update of it implemented some questionable privacy settings and behaviors. To its credit, Microsoft has tried to either fix or at least explain those options, though not always to everyone’s satisfaction. Its latest attempt is to provide tools that will let more privacy and tech-savvy users drill down into exactly what Windows 10 is sending to Redmond.

There’s no avoiding the unfortunate fact that most services and some software these days harvest user data, often under the guise of improving the service by gathering telemetry or diagnostic information, promised to be anonymized. While some people might accept that reasoning, there’s very little way we can be sure that that’s all they are collecting.

Some companies, like Google, have provided ways for users to view the activity that happens on their accounts and the data that gets sent to their servers. Microsoft’s new Data Privacy tools for Windows 10 does likewise. Its Windows Diagnostic Data Viewer, for example, allows curious and knowledgeable users to see the exact fragments of data that the operating system is sending Microsoft. And since it’s quite a lot (no surprise there), the app categorizes the data into a few types:

• Common Data, like the Operating System’s name, the Version, Device ID, Device Class, Diagnostic level selection and so on.
• Device Connectivity and Configuration such as device properties and capabilities, preferences and settings, peripherals, and device network information.
• Product and Service Performance data that show device health, performance and reliability data, movie consumption functionality on the device and device file queries. It’s important to note that this functionality is not intended to capture user viewing or, listening habits.
• Product and Service Usage data includes details about the usage of the device, operating system, applications, and services.
• Software Setup and Inventory such as installed applications and install history, device update information. 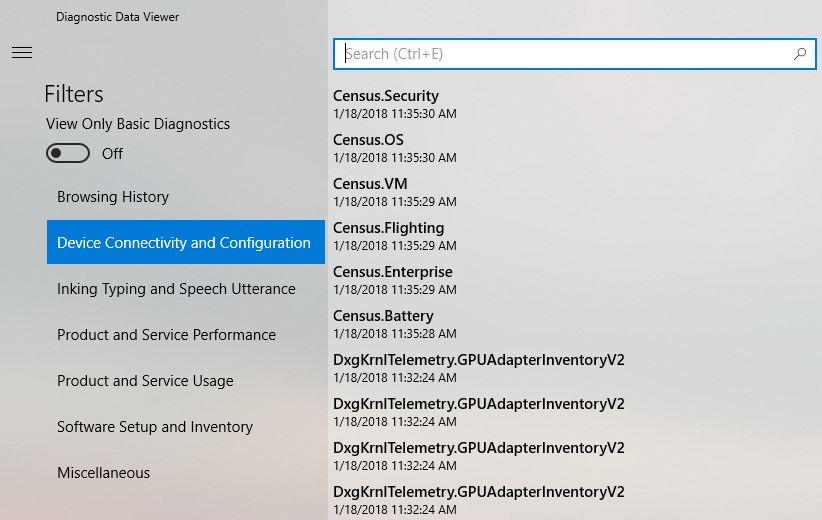 Microsoft’s Privacy Dashboard now also has an Activity History that will be familiar to advanced Google account users. Not only does it show what data is associated with your Microsoft Account, it also lets you adjust the privacy settings to your liking. In the future, it will also include media consumption data and, perhaps more importantly, allow users to delete specific items from the dashboard.

Of course, we still have to take Microsoft word that these are all that it collects and nothing more. And it’s not going to make much sense to regular computer users. Still, it’s better than nothing and at least provides privacy watchdogs with a tool to monitor Microsoft’s actions on behalf of those who can’t.