Will self-driving taxis watch you with AI eyeballs?

I was talking with some people recently about self-driving cars and how one day you’ll be able to pull your phone out of your pocket and order a taxi, and it’ll show up just like an Uber car, only without the driver (in fact, Uber’s working hard to ditch all of its human drivers). Autonomous taxis are potentially great: they’ll be cheaper because there’s no driver to pay, they’ll be more efficient and, in some instances, less creepy and uncomfortable. The conversation got me thinking, though: how will the owners of these autonomous taxi fleets deal with human nature and its tendency to destroy stuff?

Humans are a strange lot. We’ve created many incredible things during our collective presence on this planet, yes, but we’ve messed a bunch of stuff up, too. Humans can be as destructive as innovative, but the big difference is that anyone can be destructive. It takes very little thought to mess things up.

Remember the hitchhiking robot and its decapitation in Philadelphia?

The situations in which we (we meaning humanity as a whole) mess with and otherwise destroy things depends greatly on the state of any given environment, though. Because humans are social creatures, we’re aware of others’ awareness of us, as well as what those people may be thinking and how those perceptions could affect our personal existence. We adjust our habits or actions in light of both strangers’ awareness and our own awareness of their awareness…even if we don’t realize we’re doing so.

Researchers with Newcastle University conducted a study last year that looked into littering and the instances in which people are most likely to litter. As you may expect, people are less likely to litter if there are other people around to see their actions — being observed acting in a way that violates a social expectation (in this case, littering) deters people from acting out. 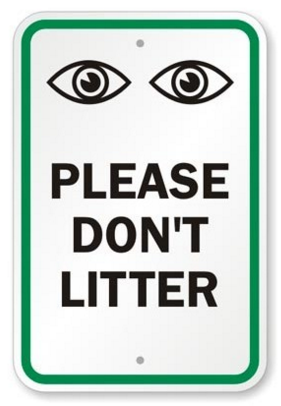 Humans are more likely to be cooperative and to behave according to social rules if they’re being watched…but not necessarily by humans. The study above found that simply printing pictures of eyes on leaflets or signs reduced instances of littering much in the same way having an actual living, breathing human around would.

It’s not hard to imagine that self-driving taxis would suffer a level of vandalism and destruction regular human-driven taxis don’t — isolated within a moving vehicle, one that may not have clear windows, and without any fellow humans would remove the sense of being watched, leaving the rider perfectly alone with his or her own potentially destructive thoughts.

Of course, these future autonomous taxis will probably have more than a couple varieties of deterrents: perhaps a security camera that monitors everything you do, the threat of paying handsomely for any damage you’re proven to have caused, and the public shame of being blacklisted from a particularly popular mode of transportation. Perhaps these taxis will be able to self-evaluate themselves and determine whether they’re in satisfactory condition to pick up a new passenger, or whether they need to return home for a proper evaluation and sanitization.

“The human driver triggers some level of self-policing. What happens when that driver is removed?”

Humans are crafty, though, and it’s just as easy to imagine people finding ways to game the system. Who cares about potentially paying damages if you’re registered with a limited-funds prepaid credit card and under a fake name? Some folks won’t even think of consequences like that, acting purely off impulse. As well, every instance in which a car has to be temporarily taken off the road to be cleaned or evaluated is an extra expense for the company — and therefore all users — and deterring such destructive behaviors is ideal.

Could a simple pair of life-like eyeballs, perhaps with an AI foundation, be the solution?

Being alone in a car and feeling alone in a car are two different things. If cartoonish printed eyes on a sign can deter littering, can a pair of life-like eyes somewhere inside an autonomous car keep bored or otherwise destructive people in check? And if so, where’s the presumably fine line between simply feeling passively observed and feeling uncomfortably surveilled? Would a single eye-ish design in the dash, behind which lies an ordinary security camera, be enough to make someone subconsciously aware of someone else’s awareness without inviting claims of police states and 1984? Or could we be looking at a future where life-like robot ‘drivers’ take up space in the car, frowning at the trash passengers toss on the ground and tsk-tsking as riders scratch their names in the back of the seats?

The answer, of course, is who knows. Perhaps all it will take is a customer profile with a verified government ID on file and the threat of a police report to keep future riders in line. Or, in a less draconian fashion, manufacturers may choose to distract their riders into peaceful obedience with on-board VR headsets and built-in movie projectors.