Where the Heck Was I in the Nineties?

My son sits in the back of the car a lot. There’s the ride to and from school, the field trips on weekends, that sort of thing. I have an internal struggle on what he should be doing back there. Part of me wishes onto him the excruciating boredom I suffered through in my youth in the back of cars. I tell myself that his character will be built upon managing such boredom and not indulging his every whim with digital stimulus. In other words, I worry his iPad is rotting his brain (disclosure, during the day I work for Samsung, we make competitor tablets that I also worry may be rotting his brain). Still, I can’t take away his tablets. I can’t do that to my child. I understand.

Sometimes I make him turn it off and we talk. He’s a 4 year old, so he asks really deep questions and I get to come up with all sorts of crazy metaphysical answers that he’ll either forget or distort in his mind enough that there will be no negative repercussions.

“Where do we come from, Daddy?”

In the background of this car ride I play music, which I choose quite deliberately. I never listen to children’s music. I can’t. I know there’s good children’s music out there, by quality artists and musicians, with interesting, funny, meaningful, educational lyrics. Blech. Let his mother play him that dreck. She’s got horrible taste in music. If she didn’t play kids music, his next best choice with her would be listening to boy bands and whatever song got 2,000,000 YouTube views last week. Me? I have taste. I have provenance. Best of all, I have a plan. At least, I thought I had a plan.

Since he was born, my son has heard the Beastie Boys’ “Paul’s Boutique” in its entirety at least once a month. I love my Sirius radio, and they play good music without commercials, which is a key component of kid-friendly listening. But I need to exercise a little control.

My parents got me into good music, but they have weird taste in music. My father has a collection of albums from great musicians, but he has the wrong album. He has the third album, or the album of cover songs, or the duets album. He’s got the Greatest Hits Part II. So, I grew up listening to Magical Mystery Tour, but not the White Album or Revolver. I know Born in the USA, but didn’t discover Nebraska until recently. My first Led Zeppelin album was not titled Led Zeppelin.

I made a mix for Noah. Considering I’m so immersed in gadgets and technology, you’d be amazed at how low-tech my car audio system is. I have no USB port, no 3.5mm input, and no stereo Bluetooth. It’s like I’m living in 2011. So, I made CDs. A mix on MP3 CDs.

Basically, I went through my library and pulled one song from all my favorite artists. I picked the song that got me interested in that artist. Not their best, or most famous. The one that got me hooked for the first time. I’m proud of the mix. There’s a lot of good music there. There’s a lot of emotion in it. After all, these are the songs that first provoked an emotional response to my favorite musicians, and music is important to me.

What happened? I pulled canonical songs from my library. There were plenty of newer songs, but the vast majority came from a period spanning around 1988 to 1996. Not quite middle school, more like music up until the middle of my college career. Still, there’s a huge gap there that I needed to figure out. 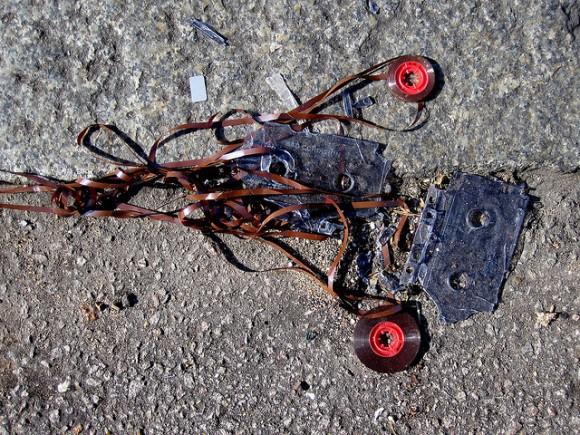 Did I not listen to music then? Was I simply ambling through life with my hands over my ears, never hearing anything new or unique? That couldn’t be true. There’s a dark period of heavy A Cappella use stuck in there. A Cappella is heavy on cover songs, so my musical growth was definitely stunted during that period. I had been strung out on vocal bands. I couldn’t find a single example of late 90s music in my collection. Nothing stood out.

The answer is probably technological. I got my first CD burner around 1999, which was early for CD burning. I probably had a 2X burner, so 1 CD took 35 minutes or more. Even then, I was burning .aiff files, fully uncompressed. Nobody stored music digitally until the new millenium.

In 1998, I lived in student housing for Northeastern grad students in Boston. My apartment was broken into 3 times. During one break-in, the thief stole my sleeve of CDs. 200 CDs, a completely stuffed, massive envelope of music. I had renter’s insurance, and they told me I was covered to replace it all. There was no chance I could remember every single CD. I made a long list of 200 CDs I’d like, and they cut me a check for something like $11.99 x 200. I went on a binge.

A couple years later, I was deeply entrenched in Napster, and my library was filling quickly. The best thing about Napster was the incredible catalogues of the other users. There was a much more personal connection with the anonymous peers with whom you were sharing. You could see their music, take ersatz recommendations, and fill in the potholes in your musical highway. I drank my fill, maxed out my hard disk drive, and never bothered to back up. See where this is going? This story ends with the 2GB 2.5″ laptop drive sealed in a static bag sitting in a drawer in my office to this day, waiting for the prices on data recovery to drop to zero.

It’s curious to think about whether a pattern is emerging. There’s a gap in my musical collection the size of a small decade. There are equal gaps in my photos, my writing, etc. There are hiccups in the imperfect digital collection of data, and it has erased some of my history. With my history, my memory disappears. I’m telling my own story but the character has selective amnesia and incomplete notes.

As we rely on digital data for our most personal memories, it’s important to ignore the caveat that everything on the Internet lasts forever. Quite the contrary. While it’s harder to scrub something from the Internet once it takes on a life of its own, it’s also impossible to find something once it has been disappeared. Hard disk drives die. Services crumble. Suddenly you’re driving around in your car thinking nothing great has happened in music since “August and Everything After,” and trying to convince your kid of the same.